When Intel's Sandy Bridge microprocessor architecture based processors debuted in January this year, it brought a massive leap in performance  for the mainstream users at a reasonable price point. In fact, its performance leap was so good that it ate into the expensive enthusiast segment of products that used the Intel X58 platform to support the Nehalem and Westmere based processors. These processors used an earlier generation of the Core microarchitecture and were the best in class since late 2008.

Consequently with the launch of the Sandy Bridge based processors, adoption of the lntel X58 platform almost grew to a halt because the mainstream audience and their workloads don't benefit from such a complex processor. After all, both Nehalem and Westmere were workstation class CPUs which Intel repackaged them to also offer something powerful for enthusiasts and serious home content creators who use professional grade software in tandem with high workloads to benefit from these processors. They were also often sought after by overclocking enthusiasts to push the performance envelope and tweak their system to their heart's content.

So was the enthusiast segment neglected after Sandy Bridge? On the contrary, Intel was busy qualifying an updated architecture for the workstation segment. Codenamed the Sandy Bridge-E architecture, it has all of what the original Sandy Bridge architecture has (minus the integrated graphics engine) and adds on a few more updates to make it the meanest enthusiast processor they've created.

Since our sneak peeks of the Sandy Bridge-E processors in September at this year's Intel Developers Forum,(IDF 2011), we have waited with bated breath for its arrival. And from various leaked slides sprouting around the net, we've long since confirmed that the top of the line new offering is the Intel Core i7-3960X Extreme Edition CPU which is also fondly referred to as the 2nd generation of Core i7 Extreme Edition processors. Our appetite was further whetted when X79 motherboards (the new platform supporting the Sandy Bridge-E) started to be delivered at our doorsteps but there was still no sight of the processor. With its arrival today, it marks added impetus of Intel’s Tick-Tock strategy in an effort to maximize its now mature 32nm manufacturing process (and for informational sake, we're still in the "Tock" portion of the cadence since Sandy Bridge-E is a natural evolution of the initial Sandy Bridge architecture). So lets get started with all you need to know of the new processors in detail. 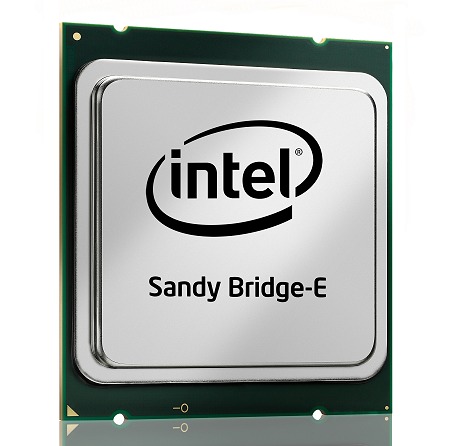 In terms of big ticket features, the Sandy Bridge-E is the first-ever consumer processor architecture (and as well as its platform) to support a quad-channel DDR3 memory architecture! Not only that, the default supported memory speeds go up to 1600MHz DDR in addition to 1333MHz and 1066MHz still being options too. Now this is a massive thrust in memory bandwidth. While impressive, it's not going to help most enthusiasts other than than the most demanding content creation tasks.

Taking a step back to contrast from Nehalem, Intel's first serious processor for the hardcore enthusiast and home workstation segment, it was also the first Intel CPU to integrate the memory controller on the die. It was also the first consumer platform to support a tri-channel memory controller instead of the dual-channel version which was already common. However as we've found, the extra memory controller was of little assistance as the platform had more than enough bandwidth. Going by the fact that even the current dual-channel memory architecture based Sandy Bridge isn't memory starved, you'll soon see that all the extra memory channels isn't going to benefit the typical enthusiast. Clearly, this processor has its roots for the multi-processor market.

The Sandy Bridge-E architecture currently supports up to 6 processing cores support up to 12 execution threads in parallel if HyperThreading is fully taken advantage of. This aspect is no different from the first generation Core i7 processors such as the Intel Core i7-980X and 990X, which were the first six-core iterations from Intel. Even the 32nm process technology used to fabricate both architectures are similar. However, this is probably where the similarities end. 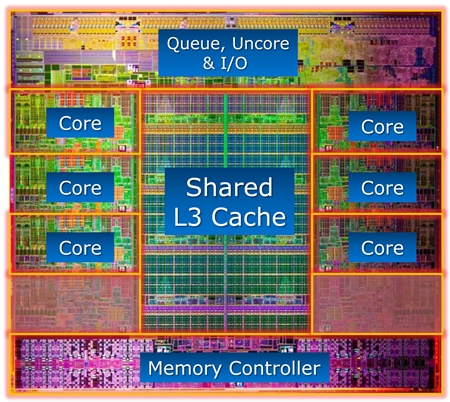 While Intel has shared the die structure of the Sandy Bridge-E processor, they've mysteriously not labelled two areas of the die which resemble yet another two cores. If you put together this rumor of an upcoming 8-core Sandy Bridge-E processor to eclipse the current top of the line Core i7-3960X in Q4 2012 as well as the above die structure, it kind of makes sense that the Sandy Bridge-E architecture really does support eight CPU cores. But we'll have to wait for many more months before that takes place.

That's not all, Sandy Bridge-E is also the first enthusiast class CPU architecture to fully integrate a PCIe controller on board and it support 40 PCIe lanes. This is a stark contrast against the the old Nehalem and Westmere cores, which don't have a PCIe controller and needed to rely on the Intel X58 Platform Controller Hub (PCH) chipset to support 36 PCIe lanes. So the Sandy Bridge-E is living up to its mainstream brother to integrate all the needed functions within the CPU (minus the GPU) with the exception of the some common I/O functions that will as usual be handled by the IOH chipset. However, unlike the Sandy Bridge which supports just 16 PCIe 2.0 lanes from its core, the Sandy Bridge-E will presumably support 40 PCIe 3.0 lanes. We say presumably because Intel hasn't been able to qualify the platform and CPU capabilities with a real PCI 3.0 x16 card and as such, marketing materials still officially mention PCIe 2.0 support only. With 40 lanes, the CPU alone can support the following PEG configurations:-

This is probably the only reason why an ardent gamer would be keen to get the Sandy Bridge-E platform - to take advantage to the new architecture and its massive built-in support for multi-way graphics card support. Both 3-way SLI and CrossFireX would be supported on most major brands, pending the actual board implementation. As for PCIe 3.0 support, that's a bit sticky for now. Even if Intel's claims of possible support for 8GT/s PCIe transfer rate does come to pass after qualifications, consumers have to also ensure their motherboard's PCIe switching components that distribute the PCIe lanes are capable of operating at those high speeds to truly support PCIe 3.0. Else, it would just be PCIe 3.0 compatible. MSI has already clarified their implementation versus Gigabyte's claim on this matter for the Z68 mainstream chipset, but it's valuable information to ensure you know what marketing you're buying into. As far as we know, MSI and ECS both use a true PCIe 3.0 implementation for their X79 motherboards at this point of time but more information on other vendors will follow soon in the future.

To support the massive memory throughput and functions integrated within this huge processor, the Sandy Bridge-E will have up to 15MB of L3 cache. The current top of the line Core i7- 3960X will feature this this wile other variants would have lesser L3 cache.

With all the above features and functions crammed into the Sandy Bridge-E processor, its transistor count has shot up to 2.27 billion! This is double that of the Westmere architecture (sporting six cores too) at 1.17 billion transistors. With both of them also fabricated with the 32nm process technology, you can easily guess that the die size too has nearly doubled from 248mm2 on Westmere to 435mm2 on the Sandy Bridge-E. This is one expensive chip to manufacture. Now that so much is on the processor, it needs more power and data lines, not to mention a much wider memory path to support quad memory channels, inevitably, a new socket is needed to support its infrastructure. Enter the LGA2011. 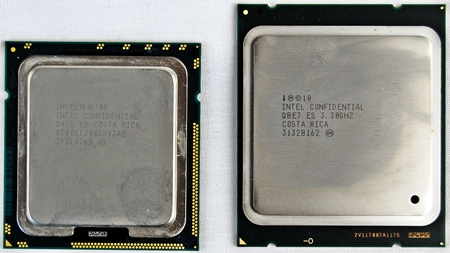 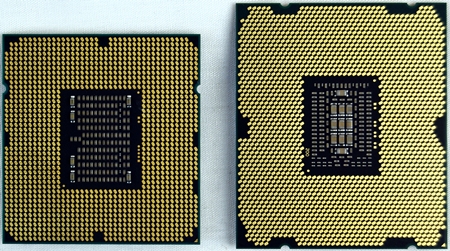 As mentioned, the increase in die size of Sandy Bridge-E processors can be attributed to the integration of a complex memory controller and PCIe controller in addition to the new features and larger cache. Increased data and power lines are required to support all of its functions and this this results in a larger package with far more contact pads on the processor and an identical number of contact points on the CPU socket, 2,011 to be exact.

With information gleaned from our press kit, Intel has announced three desktop versions of the Sandy Bridge-E processors. The top of the line offering is the Intel Core i7-3960X CPU Extreme Edition. Second in line is a Core i7-3960K and fortunately as its suffix suggests, it's also unlocked. For those wondering about the suffix differences, "X" denotes a the CPU as Intel's top processor, is multiplier unlocked, and is tagged with the traditional US$1,000 pricing or thereabout. "K" on the other hand just denotes that its a multiplier unlocked processor.

The last model is the Core i7-3820, a quad-core edition which will be launched in early 2012. No pricing information has been shared of it yet. For now, we've prepared two tables to compare the new Core i7 processors against the previous generation Core i7 processors:-