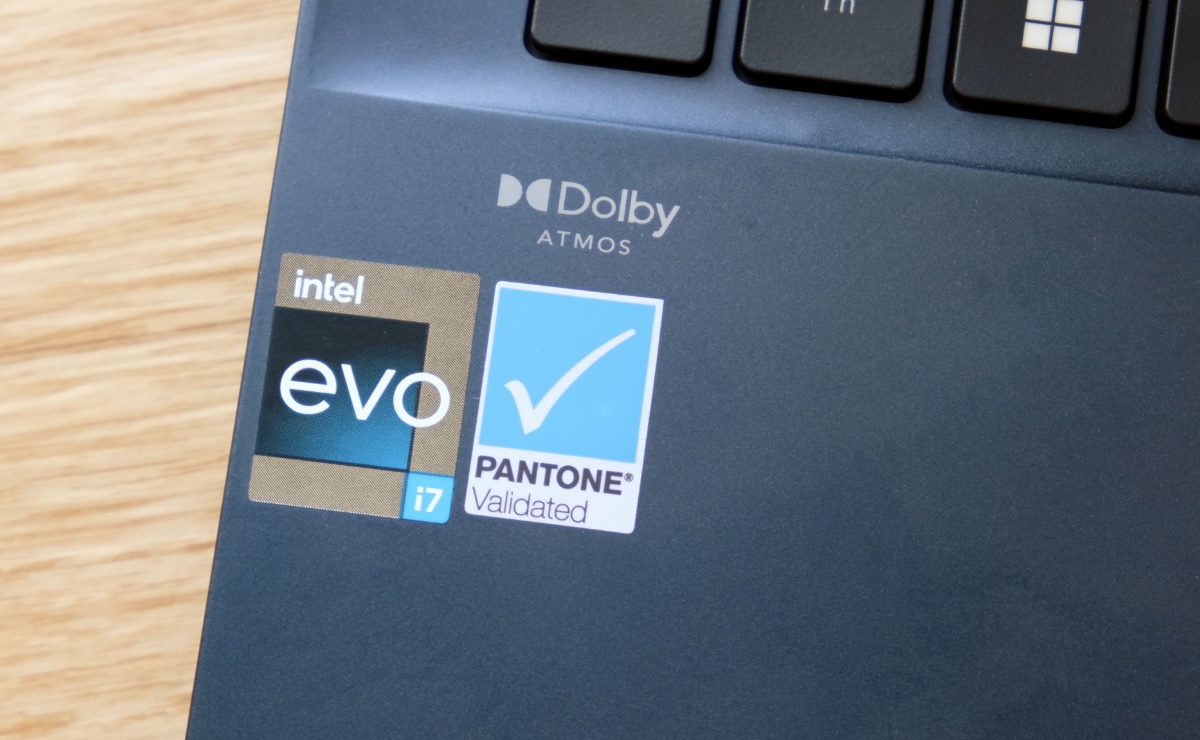 To recap, the ZenBook 14 OLED UX3402 is powered by Intel’s Alder Lake processors with a big-core + little-core implementation. In this unit, we have a Core i7-1260P which features four performance cores and eight efficient cores. This is paired with 16GB of LPDDR5 memory and a 512GB PCIe 3.0 SSD. There’s no discrete graphics so all graphics processing duties are handled by the integrated Intel Iris Xe GPU. That aside, the ZenBook 14 OLED UX3402 is Intel Evo certified as per the badge it carries that denotes its impressive connectivity standards, excellent battery life (as you'll see later) and has excellent responsiveness.

This notebook’s most obvious rival, insofar as performance is concerned at least, is the Lenovo Yoga 9i which is also powered by a Core i7-1260P Alder Lake processor.

Let's see how it stacks up against other ultraportable notebooks.

Overall, the ZenBook 14 OLED UX3402’s CPU performance can best be described as decent. It was clearly a step up from the older notebooks that were powered by Intel’s 11th Gen Core processors and it was, unsurprisingly, a little slower than the ZenBook 14X OLED Space Edition which is powered by a more powerful H-series 12th Gen core processor. Against its closest rival, the Yoga 9i, the ZenBook has the leg-up on PCMark. However, it trailed slightly on Cinebench, Geekbench, and WebXPRT. One thing worth mentioning is that the ZenBook gets quite loud and hot when taxed. To be fair, this issue of heat and noise is a problem that plagues all Intel notebooks, but this ZenBook felt a tad warmer than the others. 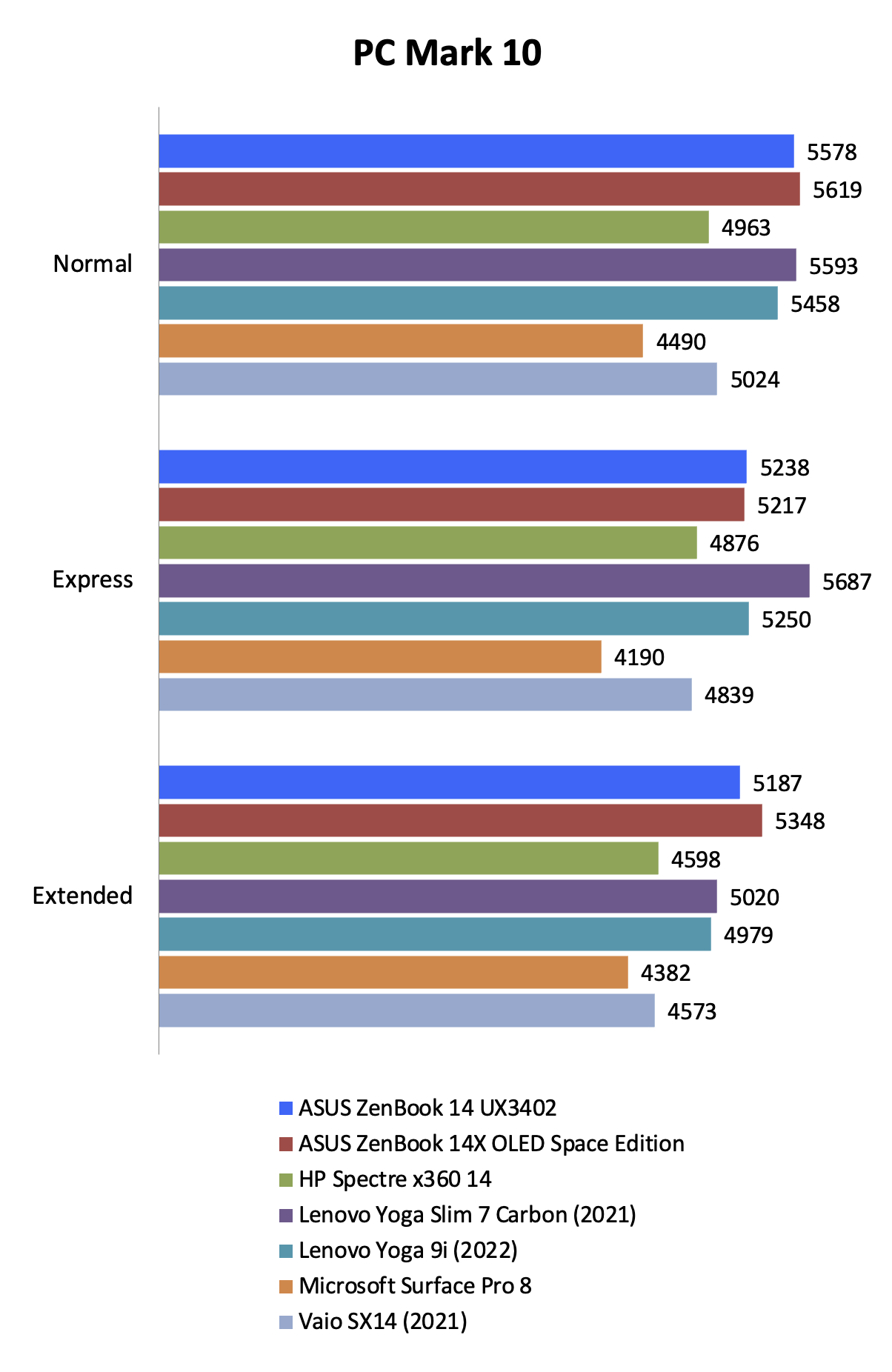 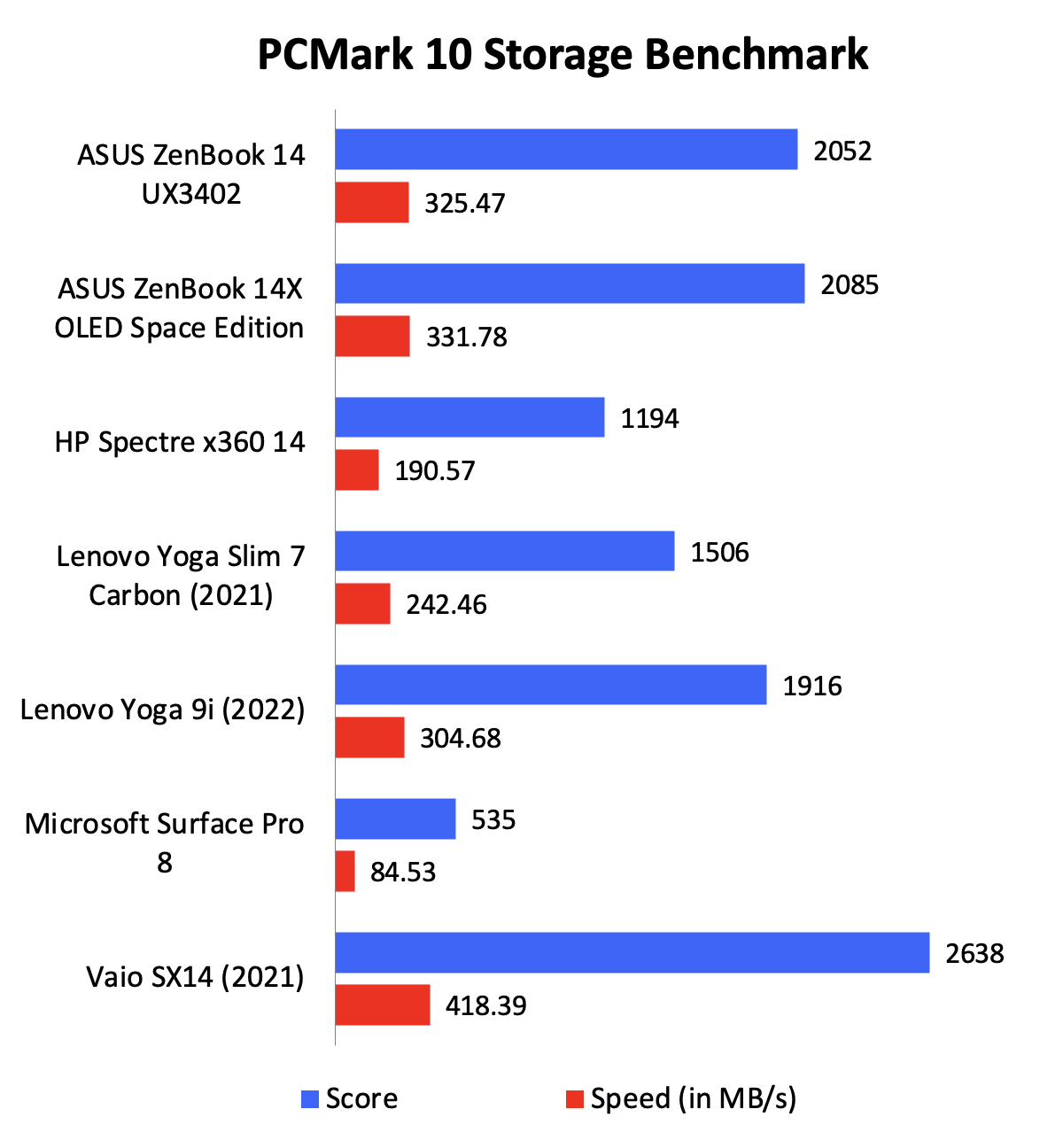 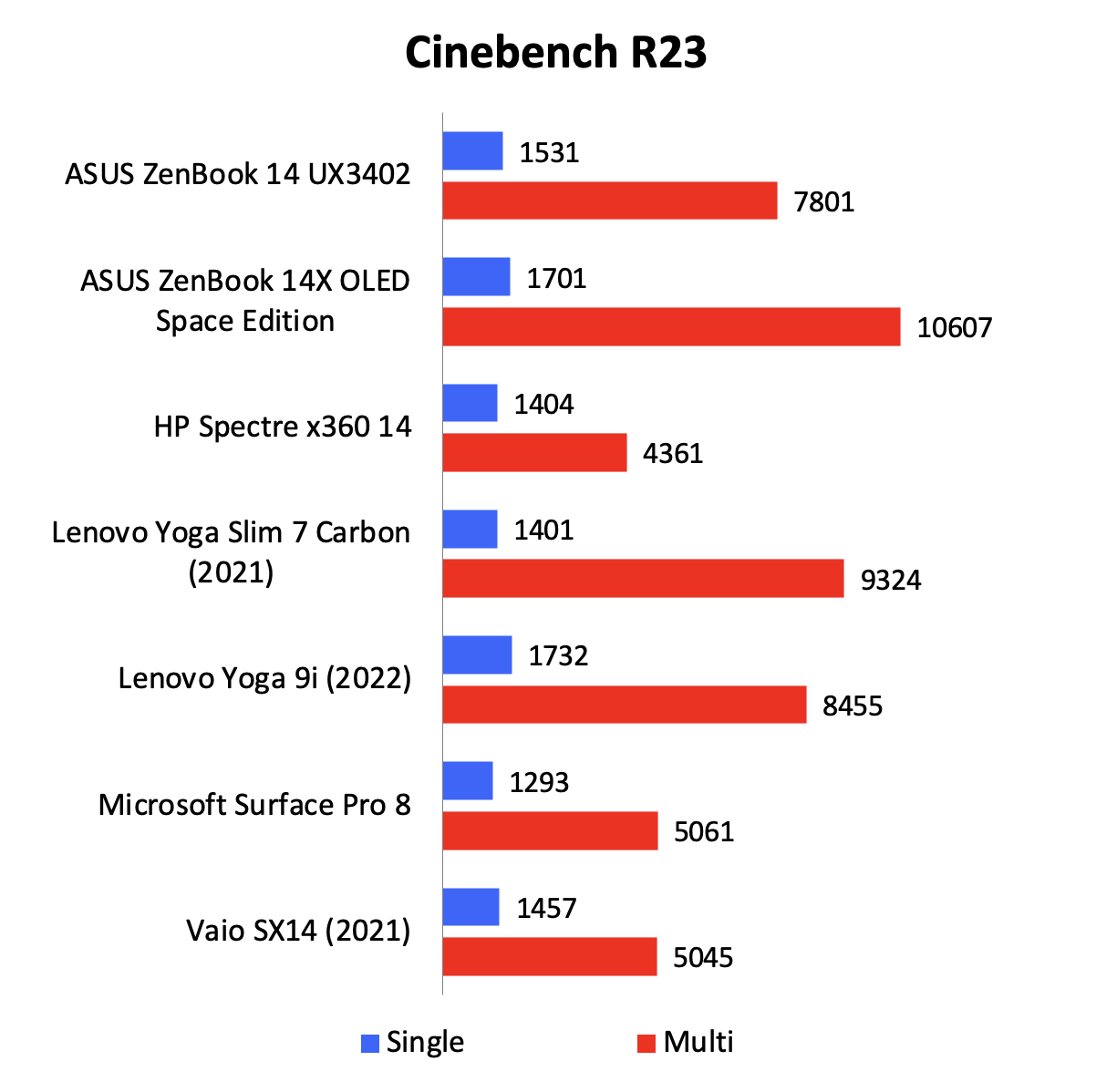 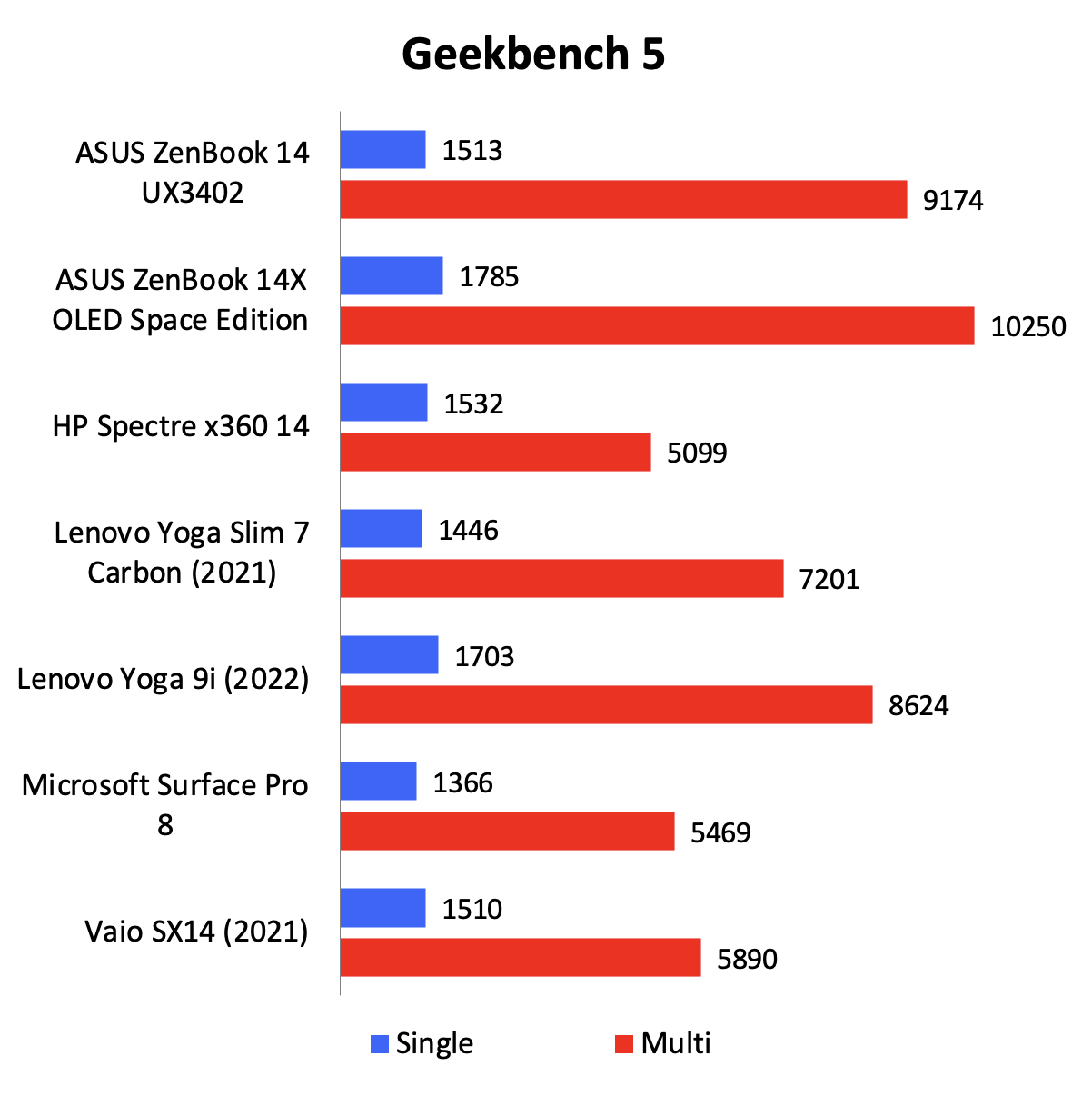 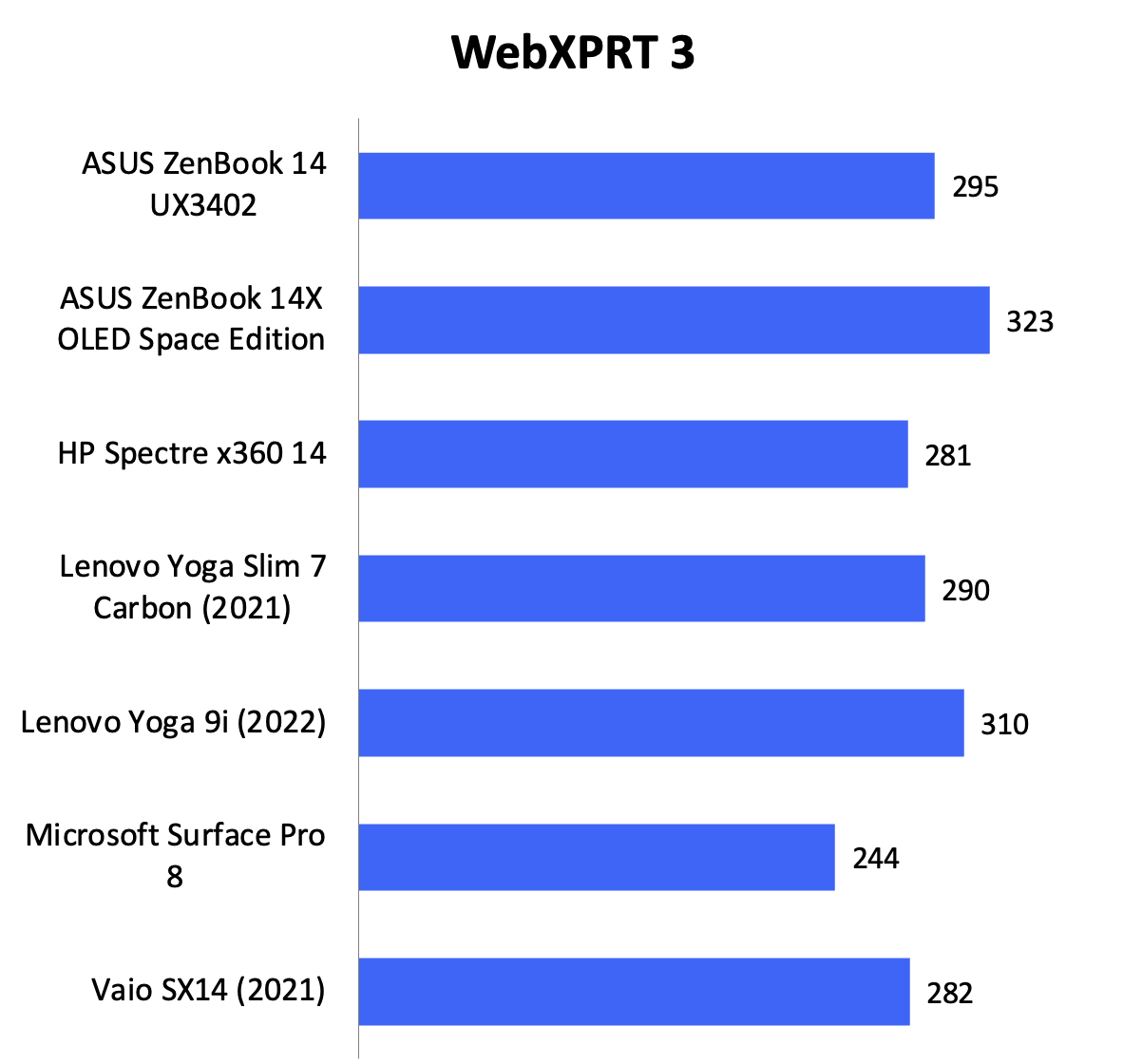 The graphics performance was a little disappointing. Even though it had to rely on the old integrated Intel Iris XE GPU, I was hoping for a little boost thanks to the new CPU cores. However, its scores were on the lower end of the scale when compared to other notebooks with similar integrated GPUs. If I had to guess, its performance was limited by just how hot it ran. 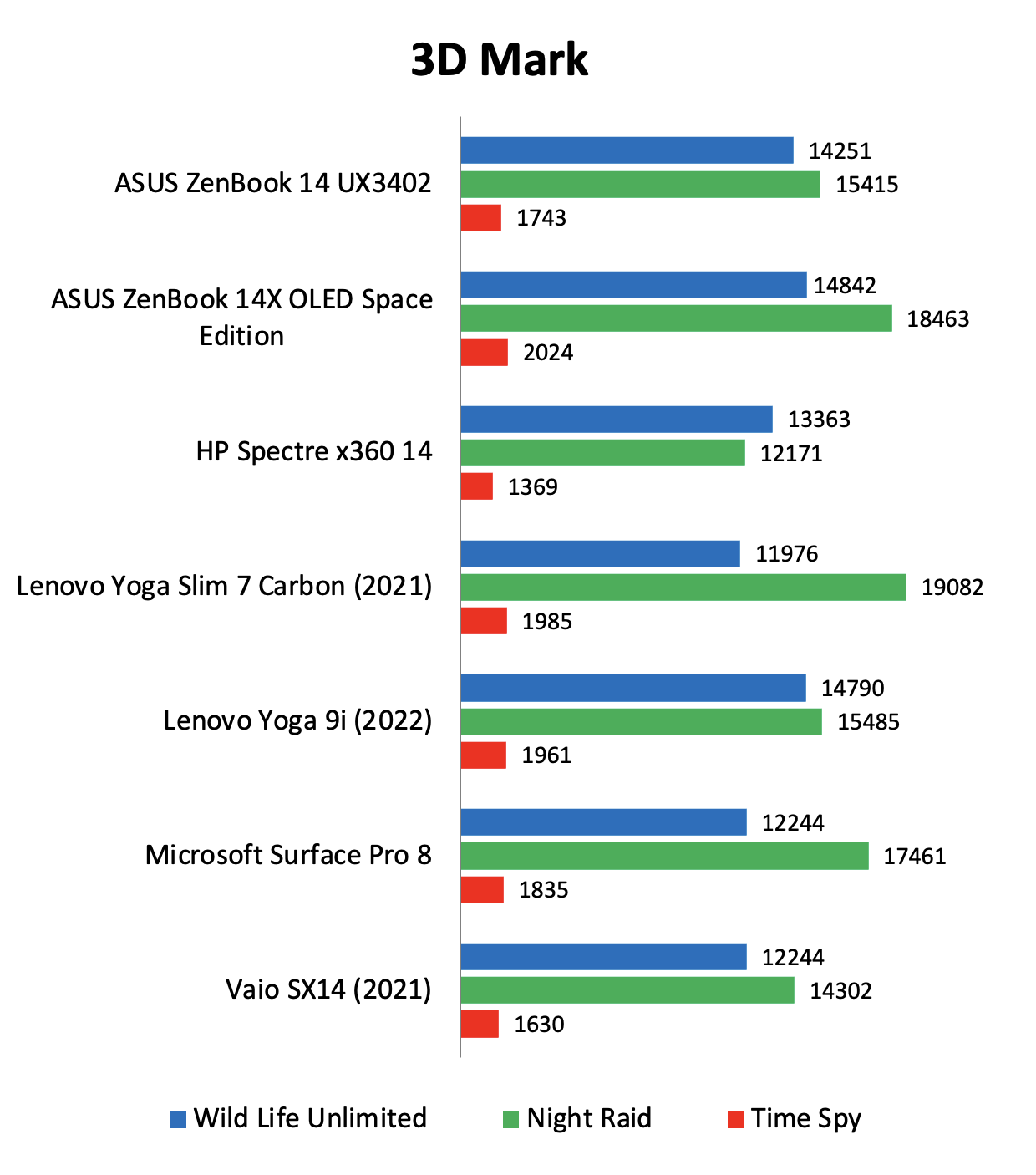 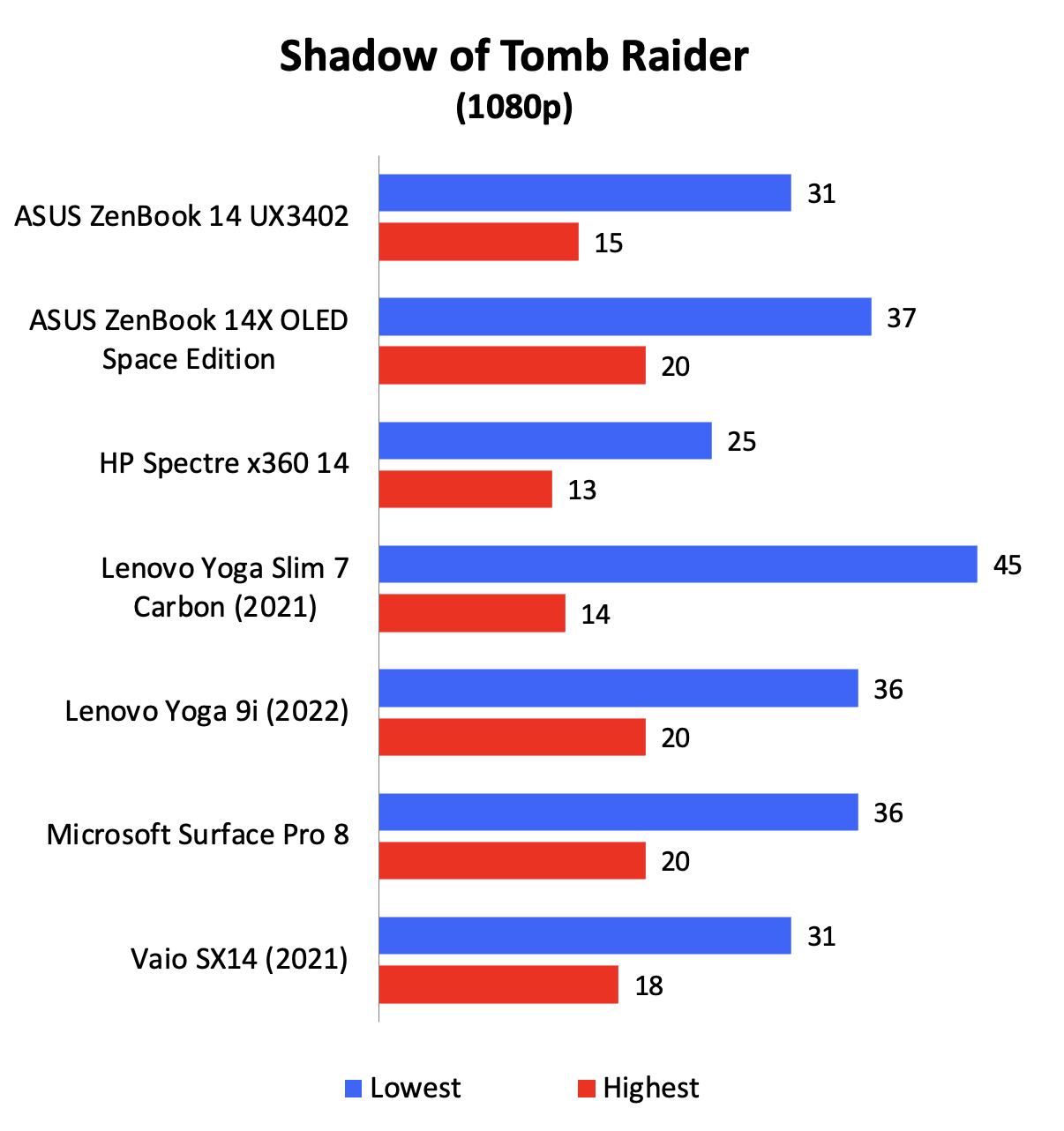 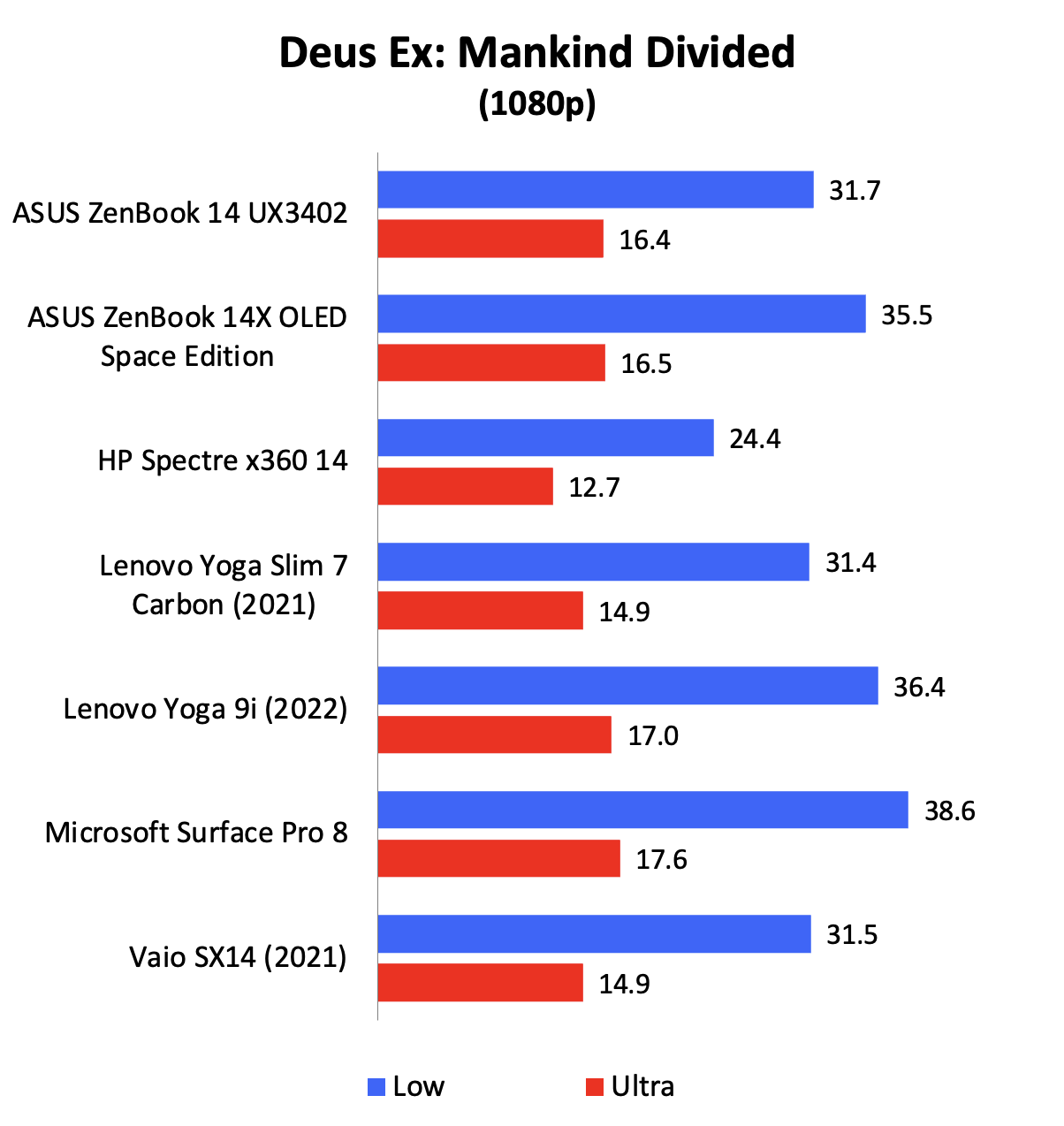 With its 75Wh battery, the ZenBook 14 OLED UX3402 has one of the largest batteries in its class. So it wasn’t entirely surprising to see that it lasted a very healthy 8 hours and 32 minutes. Even on the more intensive Gaming workload, it was only 18 minutes away from lasting a whole three hours. Looking at the power consumption figures, we can see that they were only marginally higher than the other notebooks despite having an OLED display with above average refresh rates. 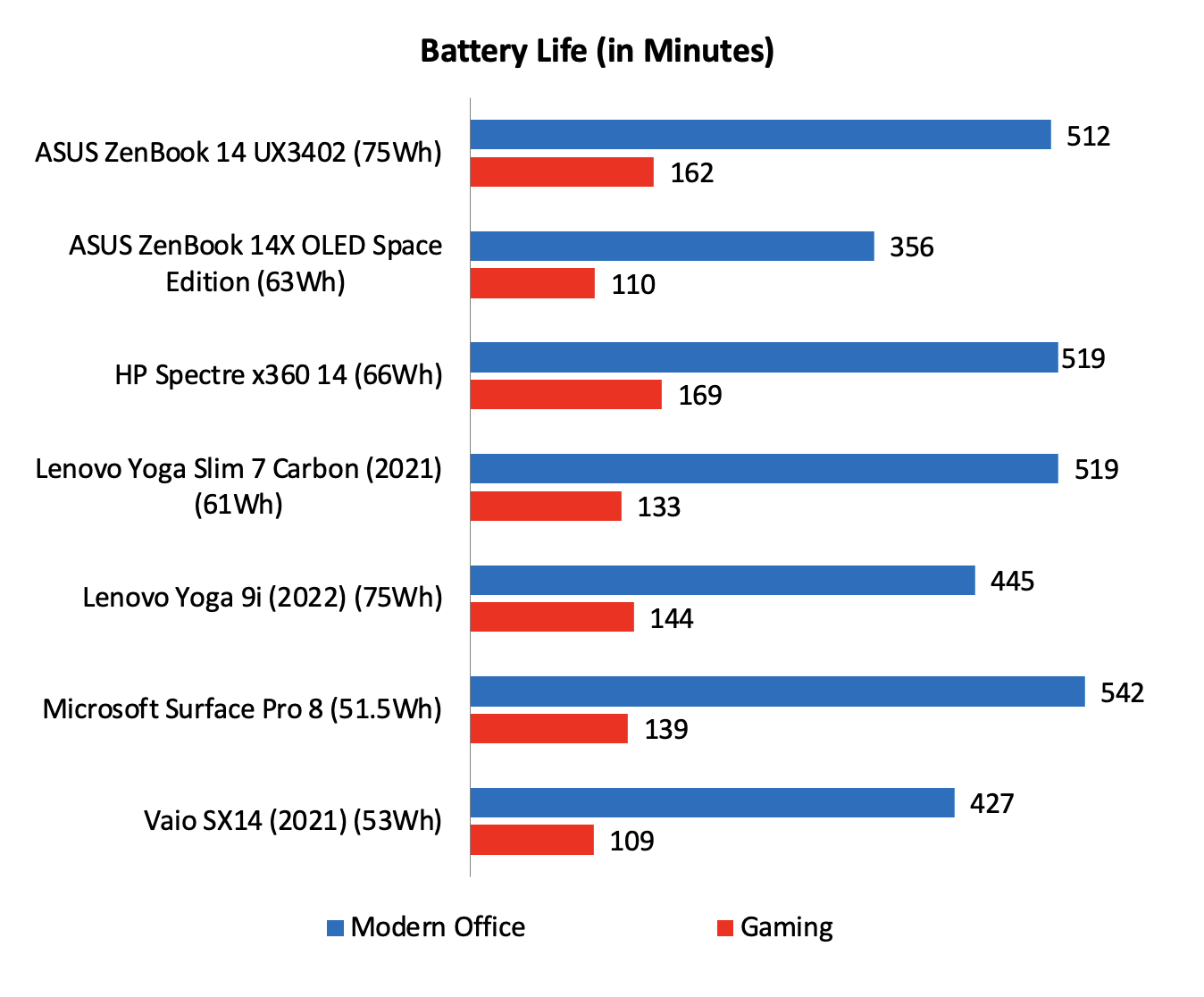 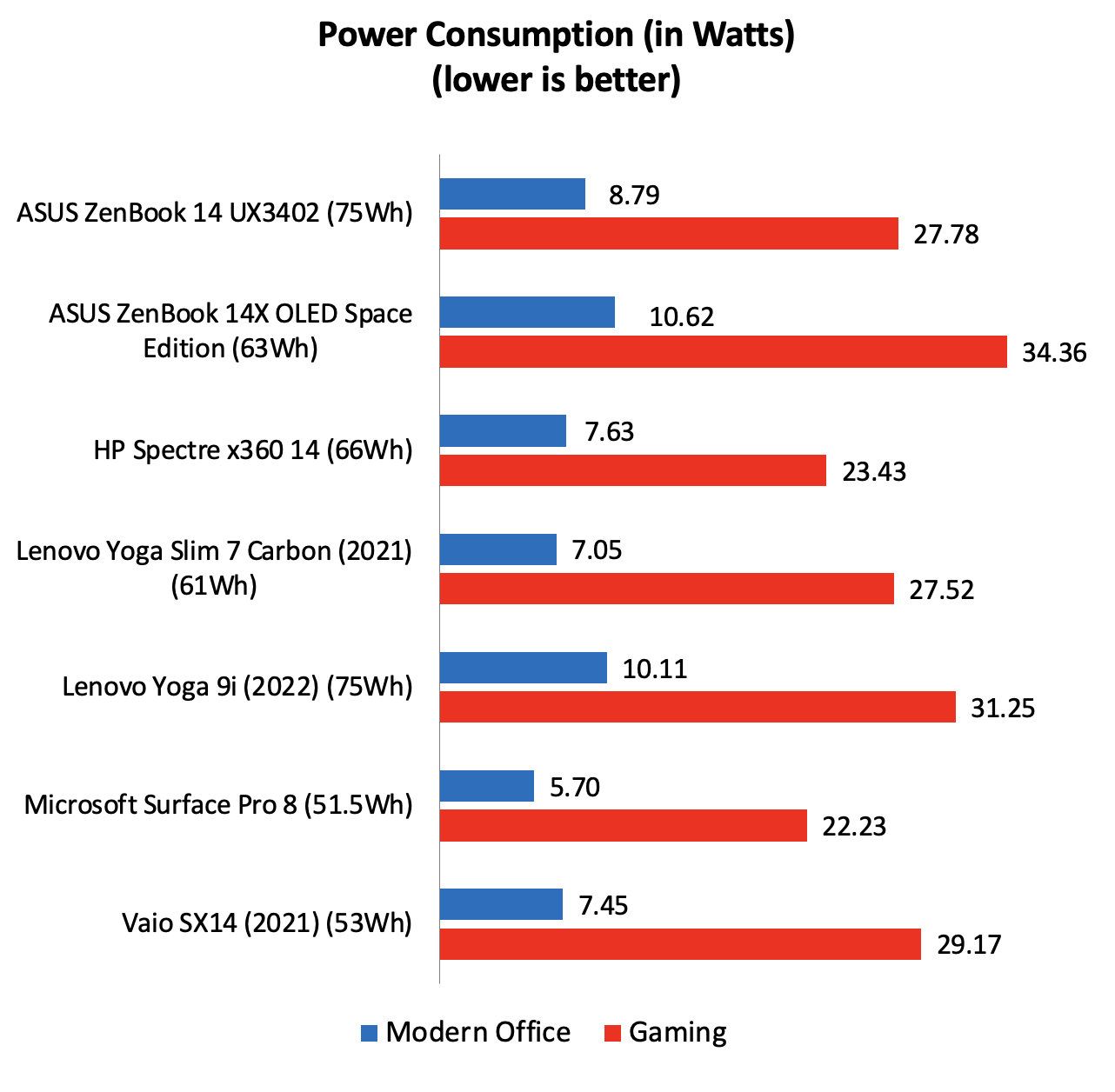 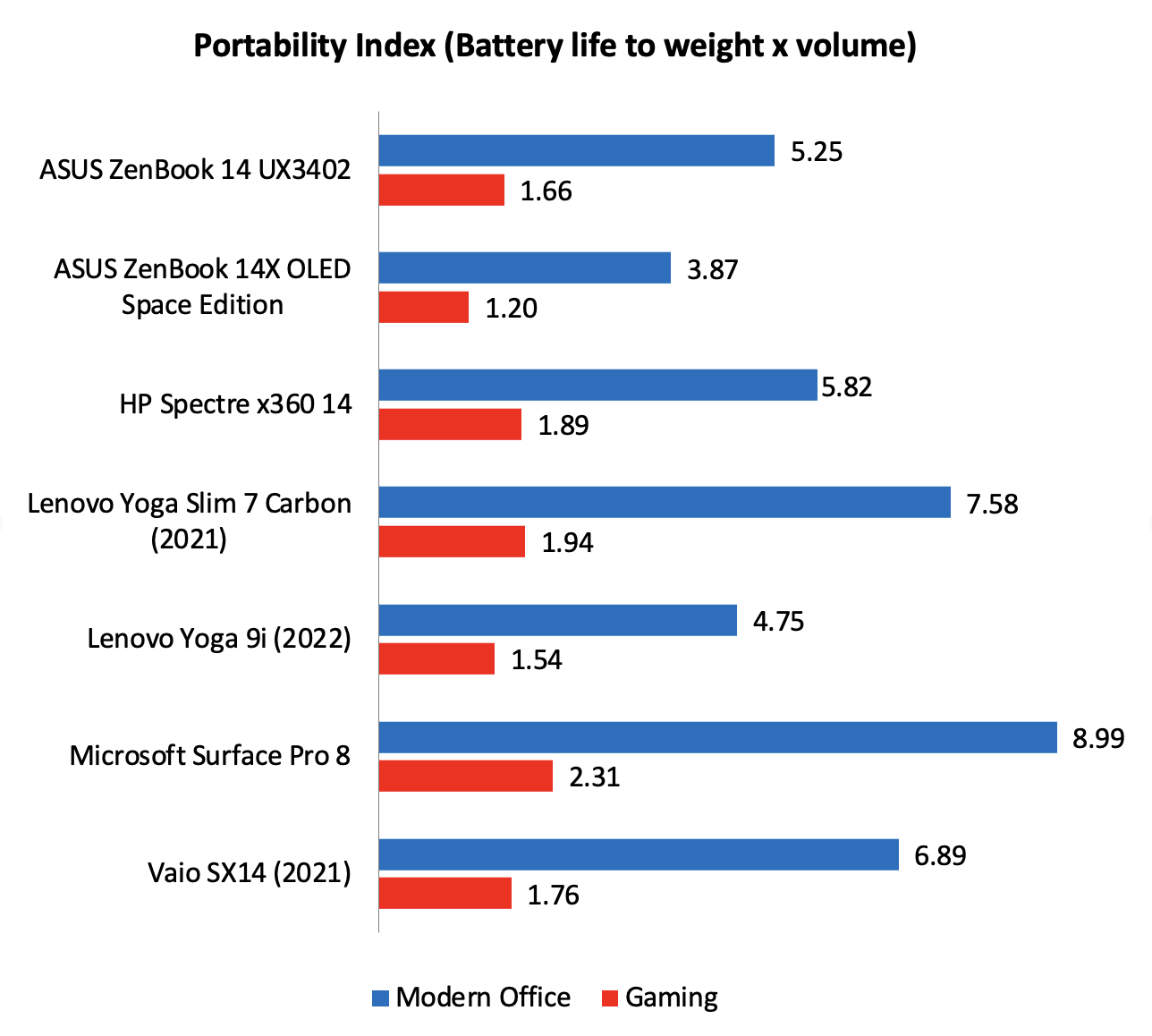 ASUS’ big push for OLED display must be viewed as a positive. What used to be a high-end feature can now be found on a wide range of ASUS notebooks with prices starting well below S$2,000. In fact, this particular ZenBook, at S$1,899 (official price), isn’t even the most affordable ASUS notebook to sport an OLED display. 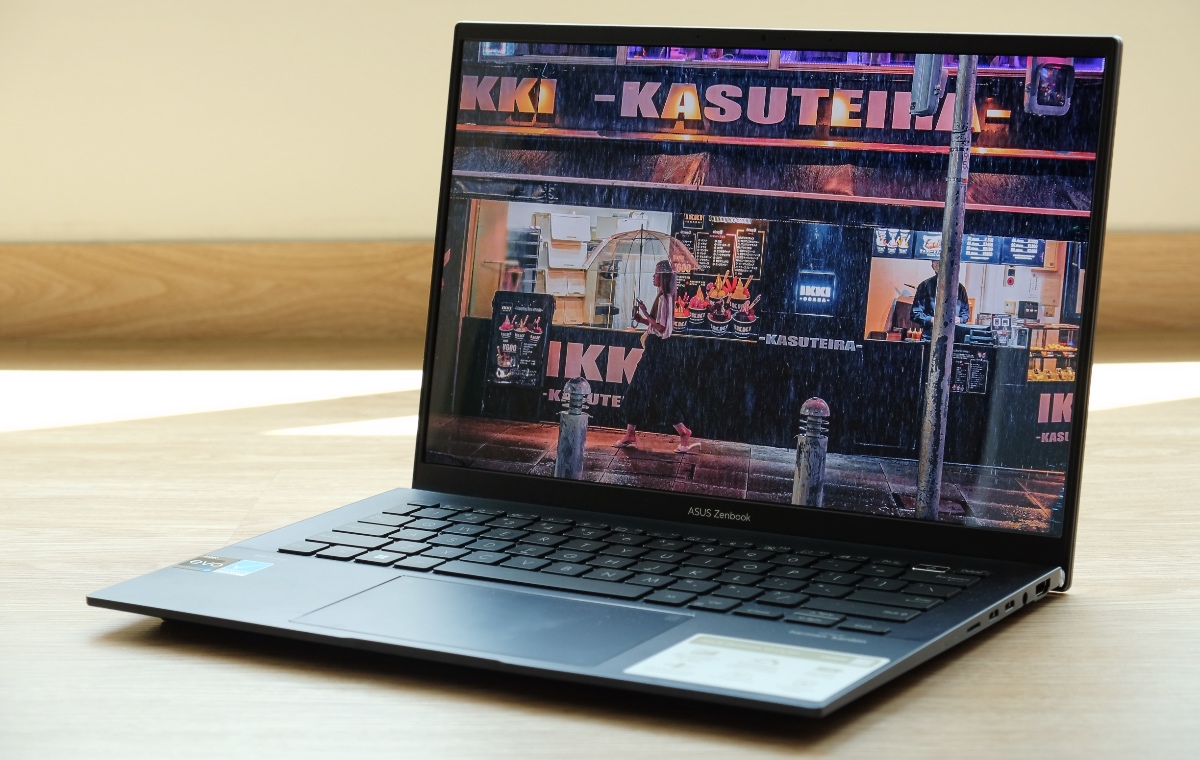 Are there niggles? Sure, there are. Build quality doesn’t feel absolute tip-top, and the webcam can be an issue if you have to often take meetings remotely. The notebook also gets noisy and warm when taxed, but as I said, the same can be said for just about any Intel-powered notebook.

The most obvious rival is Lenovo’s Yoga Slim 7 Carbon. The Lenovo also has an OLED display and, because of its carbon fibre chassis, is considerably lighter. However, the ZenBook counters with its lower price tag and superior connectivity. The ZenBook has Thunderbolt ports, which is arguably the Yoga Slim 7 Carbon greatest weakness.

All things considered, the ZenBook 14 OLED UX3402 is remarkable value and should be considered as one of the best bang for buck notebooks you can buy right now, especially with some of the current year-end offers pushing the price below S$1,700. If you are shopping for a notebook, this absolutely has to be on your shortlist.

Note: You can find the ASUS ZenBook 14 OLED UX3402 on the ASUS Online Store and the ASUS Official Store on Lazada.

Write a Review
Compare This | Specifications
Minimalist design
Fantastic OLED display
Good ports selection
Nice keyboard, large trackpad
Well-priced
Some flex in the chassis
Gets noisy and warm when taxed
Only 720p webcam
Our articles may contain affiliate links. If you buy through these links, we may earn a small commission.
Sponsored Links