Note: This review was first published on 22 February 2022. 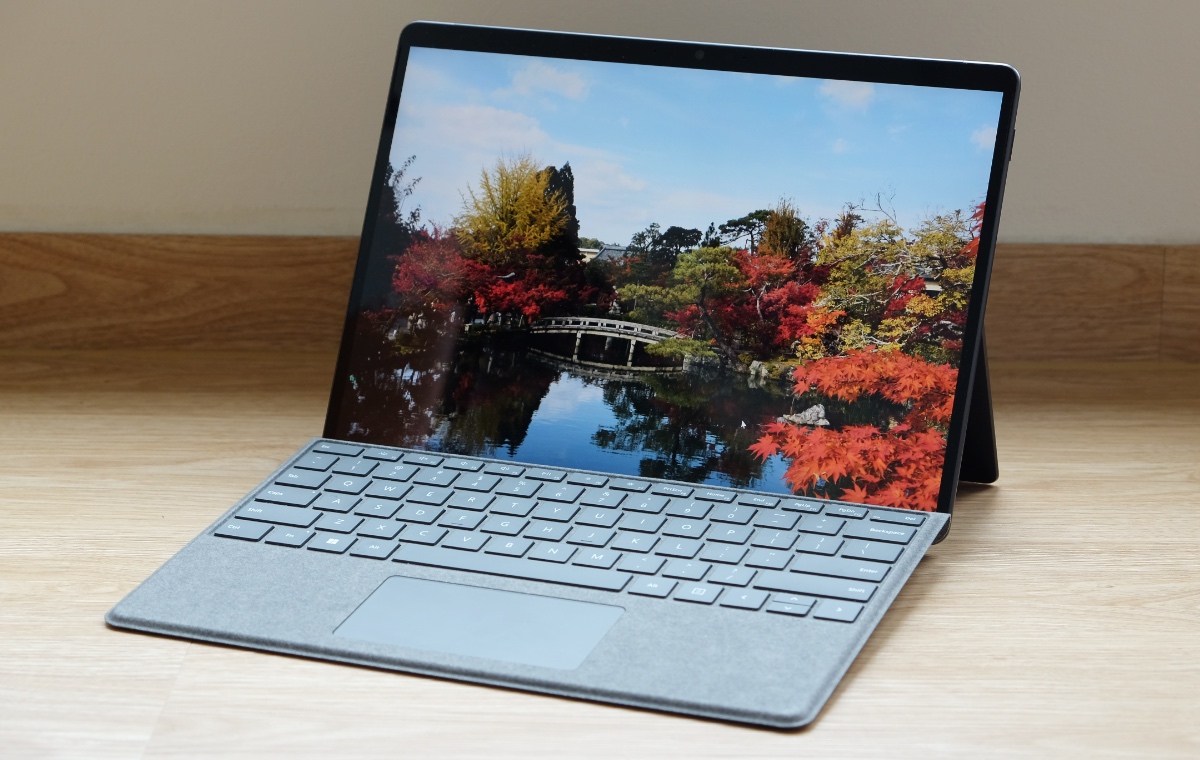 There’s no question that Microsoft’s Surface Pro is the premier detachable notebook. However, Microsoft has been curiously tardy with the last four generations since the design hasn’t really changed. Sure, they dropped the Surface Pro X in 2019 which had a sleek new design. But that was a completely different kind of device that ran an Arm processor which limited its capabilites. What people really wanted was a new x86-based Surface Pro that had the looks of the Surface Pro X. Guess what, that’s exactly what Microsoft has given us. 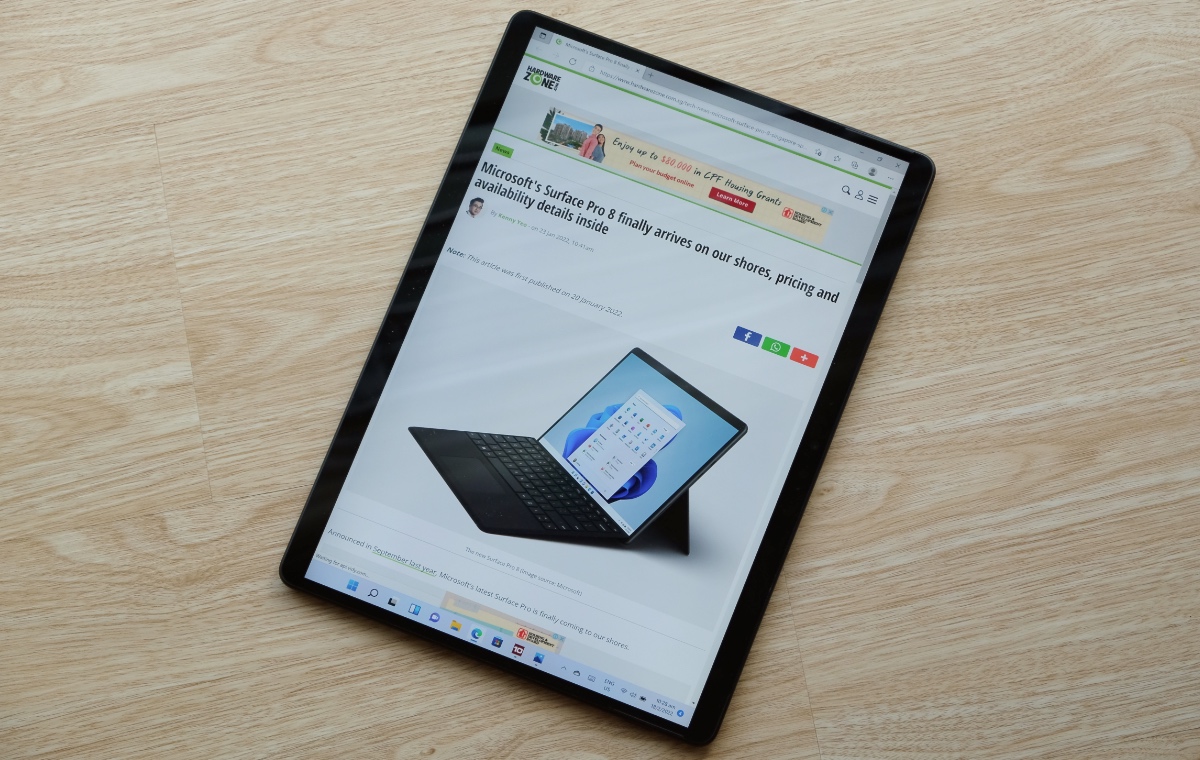 It might have taken a while but the Surface Pro 8 is finally available here. Why Microsoft has to take this long to release products locally will forever remain a mystery, but better late than never right?

The big change is obviously the design, which closely resembles the Surface Pro X. The Surface Pro 8 features a larger display with slimmer bezels on the sides. The top and bottom bezels are still quite large but they are necessary as they give users something to hold on to when the device is detached and used as a tablet. The body also has more rounded edges that make it look less blocky. Overall, it looks more contemporary and I’m confident most readers will like it.

The screen is now a PixelSense Flow display that's 13 inches large (up from 12.3 inches). Fortunately, the 3:2 aspect ratio remains which is something longtime Surface Pro owners love. Resolution is now up to 2880 x 1920 pixels so the pixel density is unchanged at 267 pixels per inch. The colours look fantastic, as you’d expect. There’s also an Adaptive Colour feature that automatically adjusts the colour profile depending on your environment. By all accounts, this is a nice display but it's not quite a match for the OLED displays you find on new ultraportables like the HP Spectre x360 14 and Lenovo Yoga Slim 7 Carbon, which look more vivid and life-like. 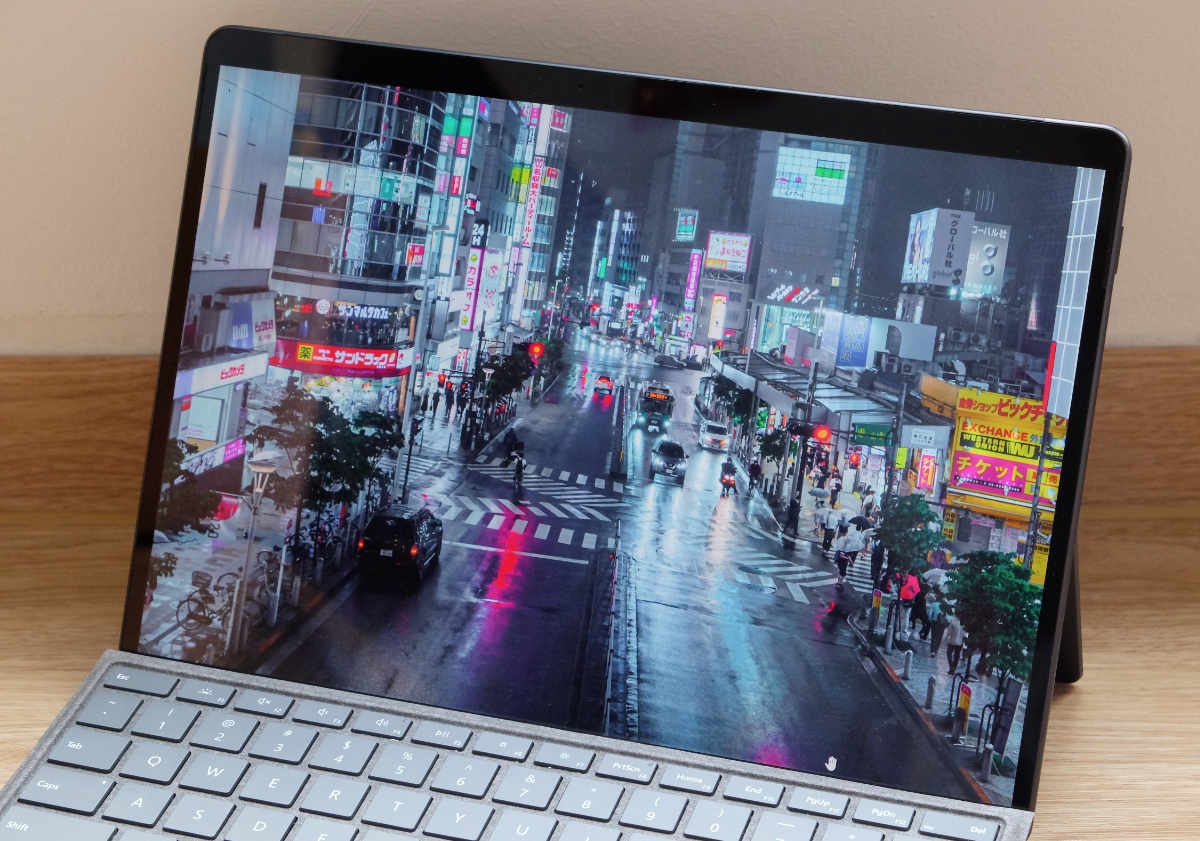 The other big improvement to the display is the refresh rate. It now goes up to 120Hz which makes a huge difference because everything just looks smoother. Scrolling through web pages and emails feel more responsive and your cursor now floats around the screen more fluidly. The only downside is that battery life takes a hit. But this can be mitigated using the Dynamic Refresh Rate option that automatically toggles the display between 60Hz and 120Hz to conserve battery.

The web cameras on notebooks are often abysmal and not worth mentioning, but that’s not the case here because the Surface Pro 8 has a fairly high-resolution 5-megapixel camera. It’s capable of Windows Hello face authentication as well as Full-HD 1080p videos, and it’s one of the sharper and better web cameras I’ve experienced on a notebook. Crucially, it produces pleasant images even in challenging lighting conditions – an important consideration for users who spend a lot of time on Zoom calls. It’s definitely a step or two up from most typical 720p web cameras you see on most notebooks. There’s also a 10-megapixel rear-facing camera, which is decent enough for a quick photo. 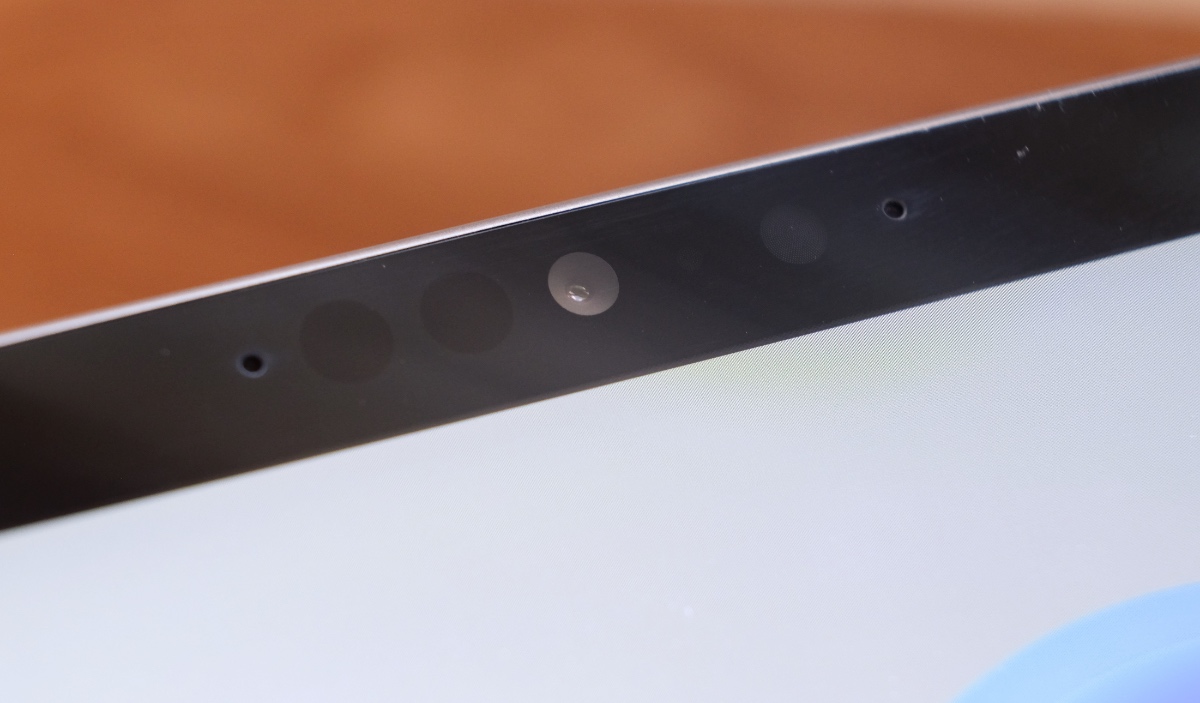 Like any contemporary ultra-thin and light device, the Surface Pro 8 only comes with USB-C ports. There are two of them and both support USB4 and Thunderbolt 4. One thing to note is that one of the ports is located close to the power button, and when removing devices, it’s easy to inadvertently hit the power button and put the system to sleep.

There’s also a Surface Connect port but that can only be used with accessories that support it like the Surface Dock 2. Sadly, there’s no memory card reader of any sort. The port situation is not ideal but at least both support USB4 and Thunderbolt 4 so at least owners can take solace in the fact that they’ll play well with any kind of accessory. 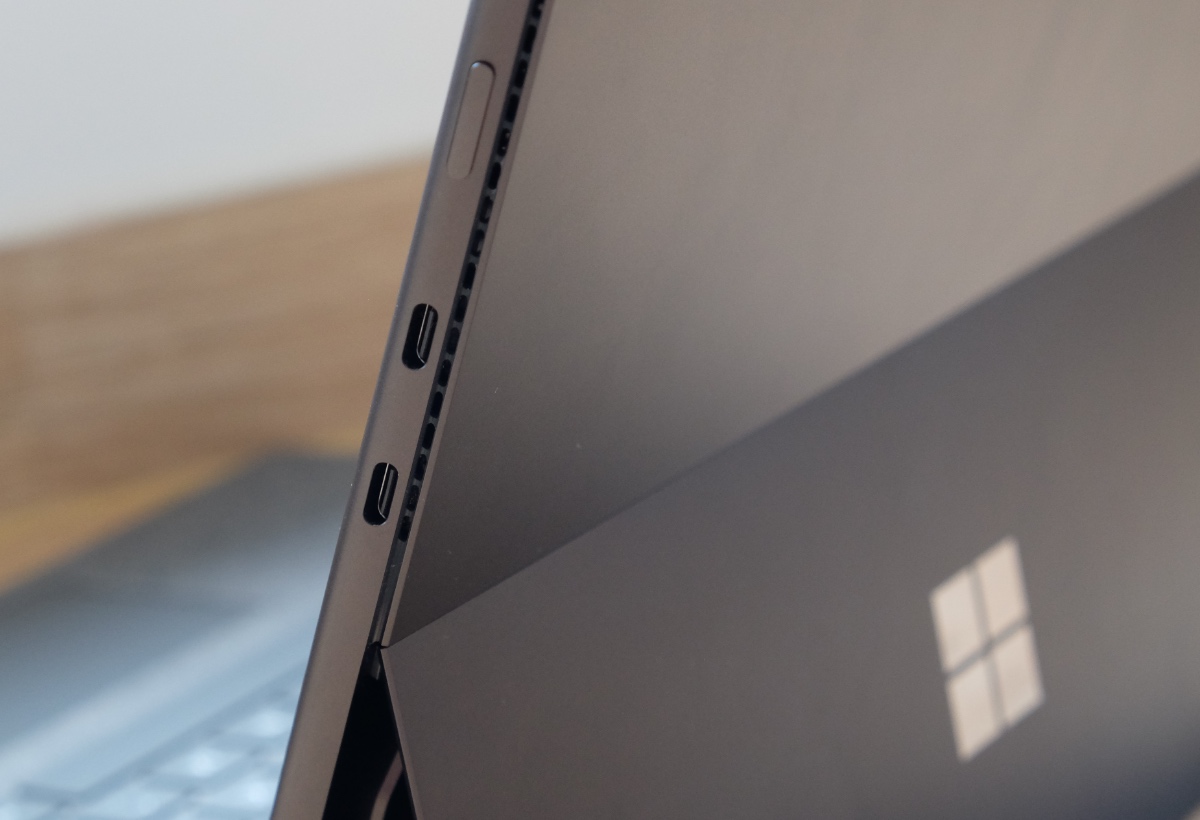 The Surface Pro 8 is powered by Intel’s 11th generation “Tiger Lake” Core processors. Readers who follow processor developments closely will know that these are not Intel’s latest. Unfortunately, that’s the problem with Microsoft bringing these products to our market late. Things do get outdated quickly.

At any rate, these processors are no slouch and customers will be able to order their systems with either a Core i5-1135G7 or a Core i7-1185G7 processor. This will be paired with either 8GB, 16GB, or 32GB of memory, and up to 1TB of SSD storage. Microsoft offers 8 different configurations so readers should be able to find something that suits their needs and budgets. The unit I’m testing comes with the Core i7 processor, 16GB of memory, and 256GB of storage. 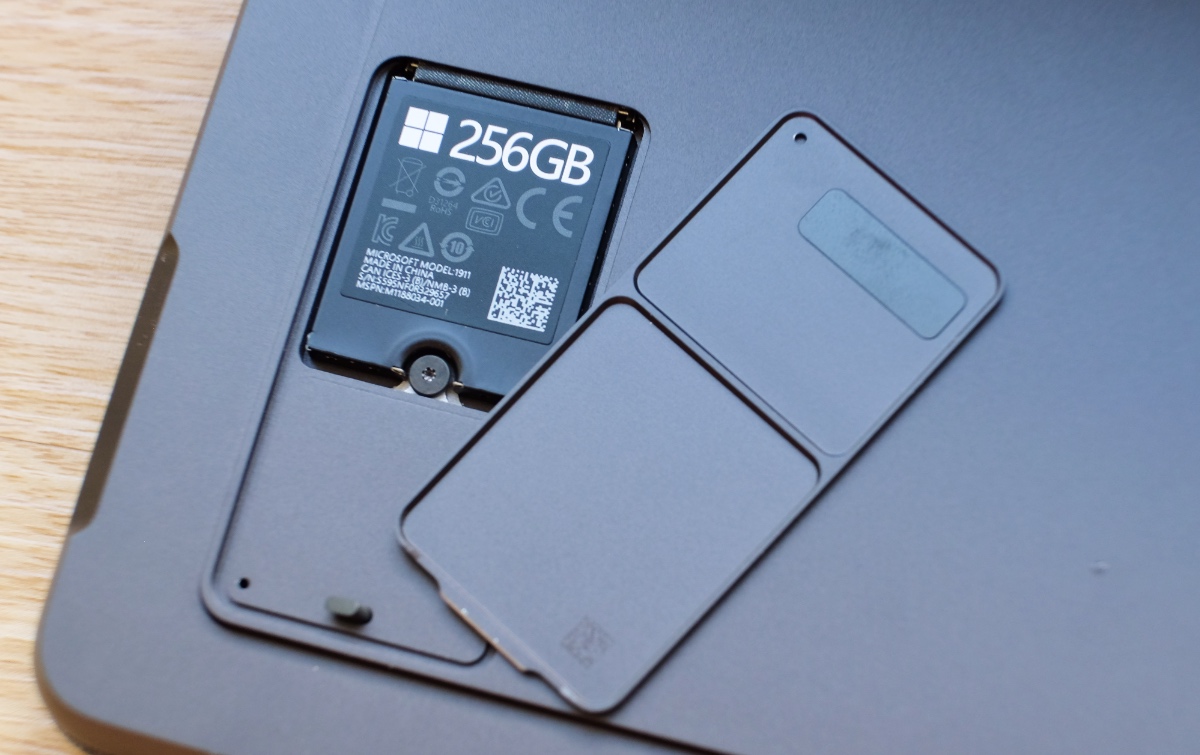 Interestingly, the Surface Pro 8 features upgradeable storage. Using a paper clip or SIM card ejector, you can remove a cover behind the device and access the internal SSD and swap it yourself. The only problem is that while it uses an M.2 connector, it comes in the rather uncommon M.2 2230 form factor, which is going to be a little harder to procure. 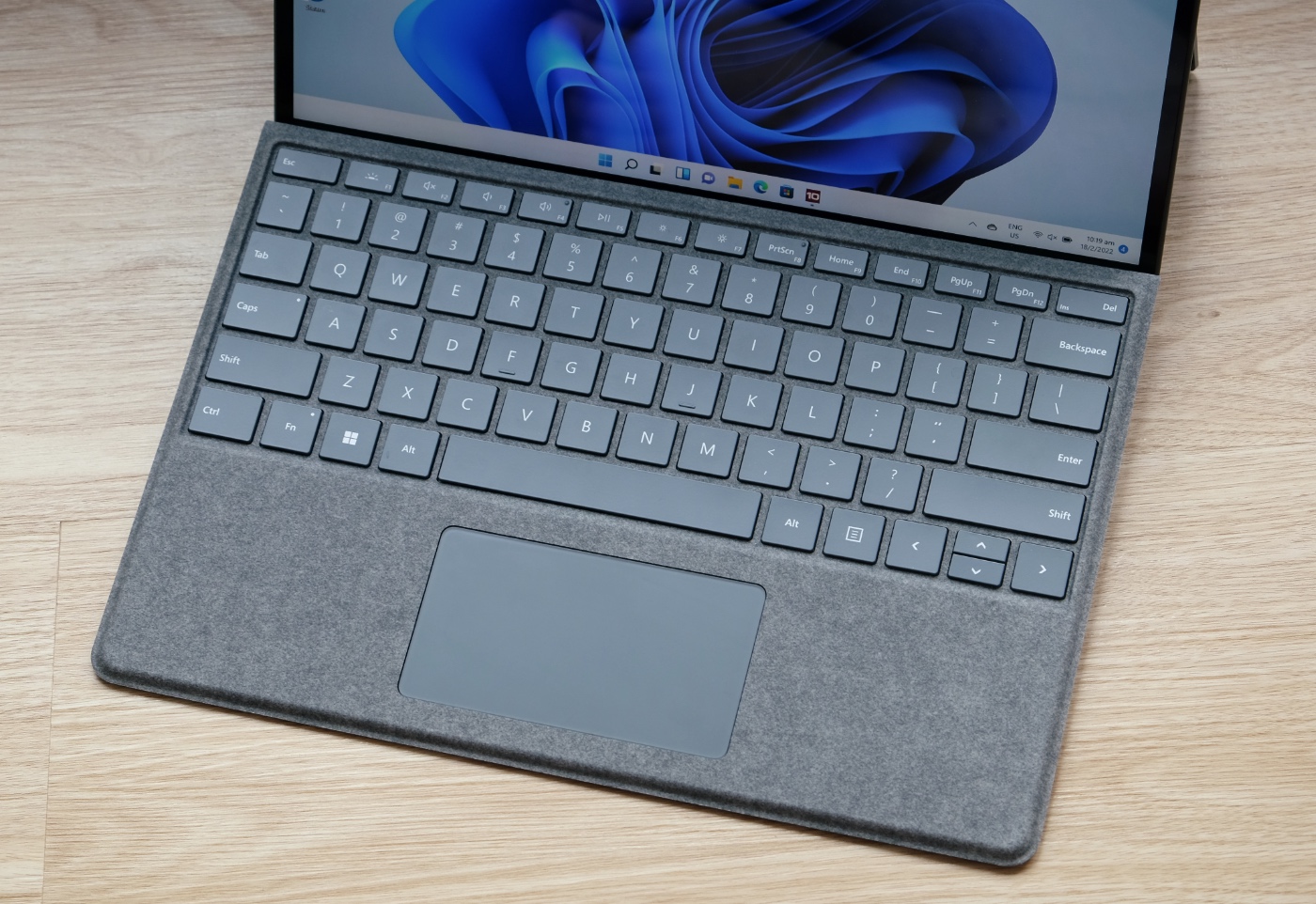 The Signature Keyboard connects magnetically to the Surface Pro and uses physical connectors so there’s no need to pair them. It has backlights that get quite bright and makes typing in the dark easy. It’s also covered in Alcantara. Though Alcantara feels nice and expensive, I suspect it will age poorly with wear.

New to this generation of keyboards is a handy storage tray for the Surface Slim Pen 2. The tray is hidden when you use the keyboard in the angled position so not only do you not see the pen, it’s also safely hidden away and there’s little chance of it falling out and getting lost. To access the pen, simply pull the keyboard flat and the pen starts working the moment you lift it from its tray. 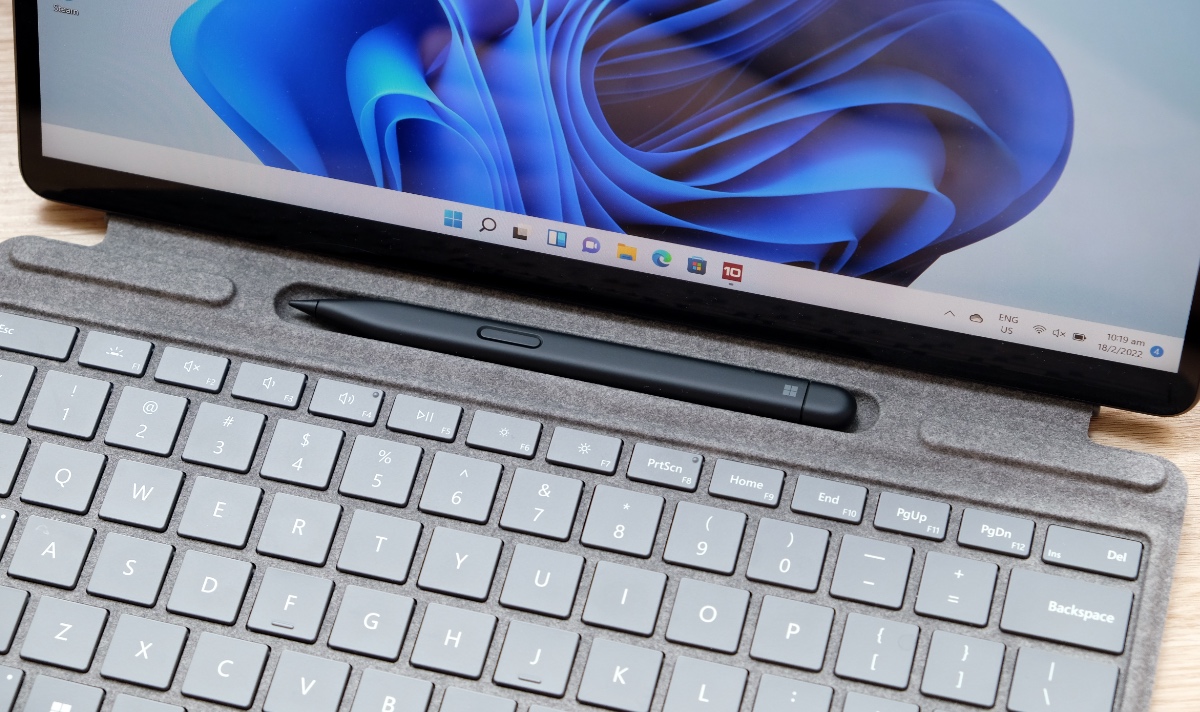 The design of the pen is quite unusual because it's fairly flat – no doubt a requirement to get it to fit into the secret tray in the keyboard. Still, it feels nice and natural to hold and it works well with the Surface Pro 8 especially when the screen is in its 120Hz mode because it makes using the pen feel more responsive.

As far as detachable keyboards go, this is one of the better ones. To start, the keys are full-sized so it doesn’t feel cramped. Key feel is positive and there’s a surprising amount of key travel. And although the trackpad is a little small, it doesn’t feel too compromised and it’s wonderfully smooth and responsive. My only complaint is that it still feels a little flimsy even though it supposedly has a sturdier carbon fibre core. It’s not really an issue if you use it on a solid surface but it’s awkward if you are typing on your lap. But maybe that’s because I type with heavy strokes.