Note: This review was first published on 24 December 2021. 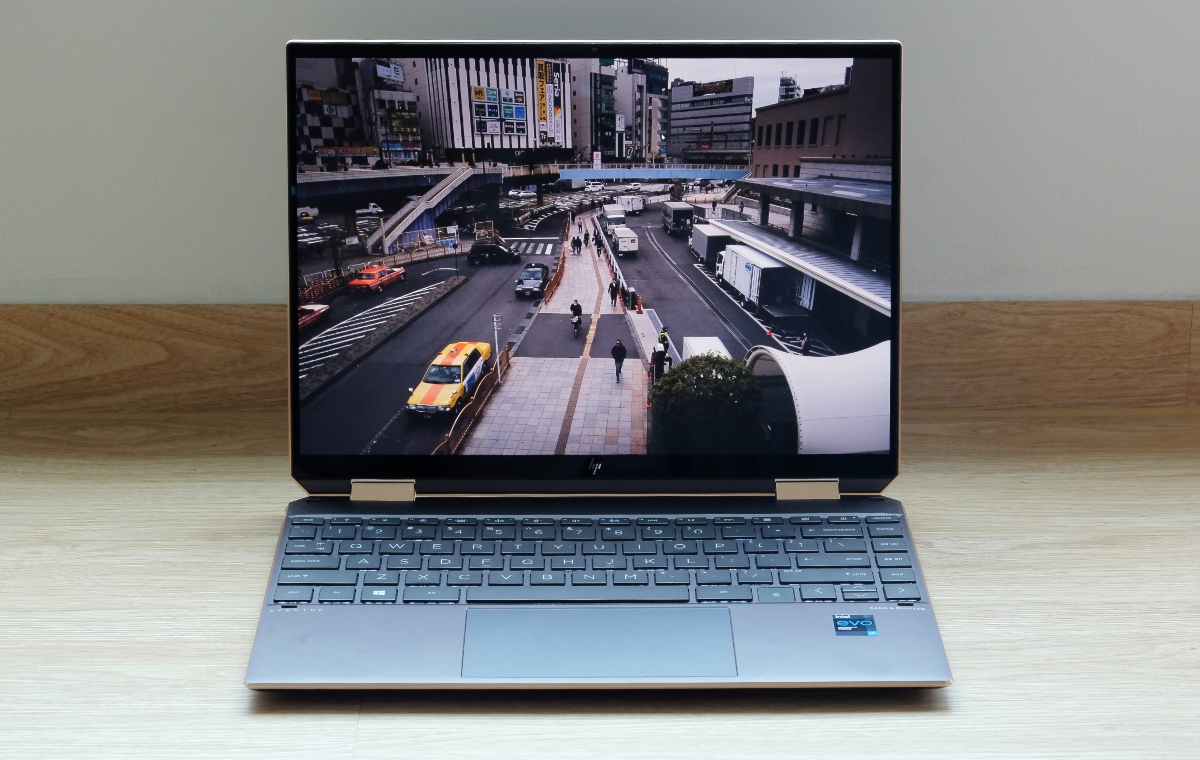 A new addition to the family

In the later part of 2019, HP made the wise decision to give its Spectre x360 13 notebook a major refresh. Thinner bezels, a smaller footprint, new processors and internals mean added attractiveness, better portability, and performance. It was so competent that it won the Best UItraportable Notebook award in our 2020 Tech Awards. And now, HP has a new 14-inch version with updated internals and a larger, improved display. This is the new Spectre x360 14.

The Spectre x360 14 doesn’t look all that different from the smaller Spectre x360 13. Like the Spectre x360 13, the new model comes in black and features copper accents. The edges are chiselled and angled. It looks unlike any other notebook in its class and I reckon it’s quite attractive. Unquestionably, it’s very eye-catching. And crucially, with a weight of 1.34kg, it remains fairly portable. 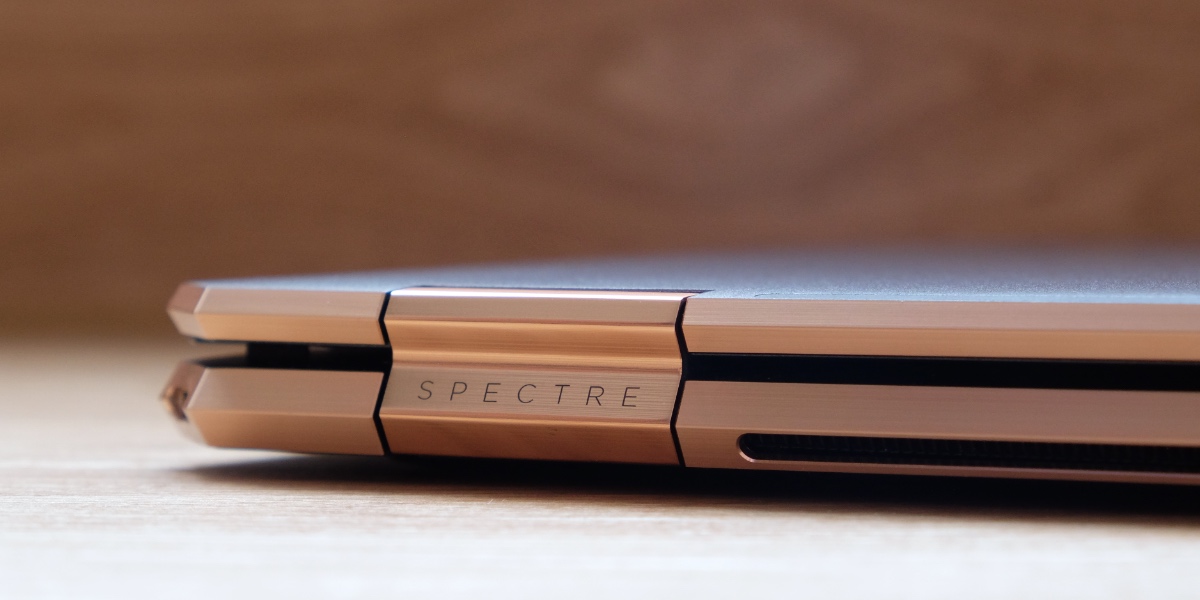 Build quality is exemplary, which is what you’d expect from a flagship-class ultraportable notebook. The body is aluminium and feels solid, the trackpad is smooth to touch, and the chamfered edges are nicely finished. It looks and feels like an expensive notebook.

The internals is pretty much standard fare for any ultraportable-class notebook – at least until Intel’s Alder Lake processors are officially announced. The Spectre x360 14 is powered by Intel’s 11th generation Tiger Lake processor and comes with up to 16GB of memory and up to 1TB of SSD storage. Two configurations are available and here they are:

Readers familiar with Intel's line-up will notice these are the company's newer chips with slightly higher CPU and integrated GPU clock speeds. The actual hardware – meaning CPU cores and GPU execution units – are unchanged. Unfortunately, because these models are so new, the one that I received for testing has the older Core i7-1165G7 processor.

The 14 refers to the new larger display. Confusingly, it’s only 13.5 inches large. In other words, it isn’t actually much larger than the display on the older Spectre x360 13 which has a 13.3-inch display.

There are two display options to choose from. You can get it with a regular LCD IPS panel that has WUXGA resolution (that’s 1920 x 1280 pixels) or you can get it with an OLED panel that has a 3K resolution (3000 x 2000 pixels). Display enthusiasts will no doubt notice that means the Spectre x360 14 has a 3:2 aspect ratio. I like this aspect ratio for work because it lets me see more a document. Regardless of which display you pick, it’s protected by anti-reflective Corning Gorilla Glass NBT. The unit I received for testing came with the OLED display. 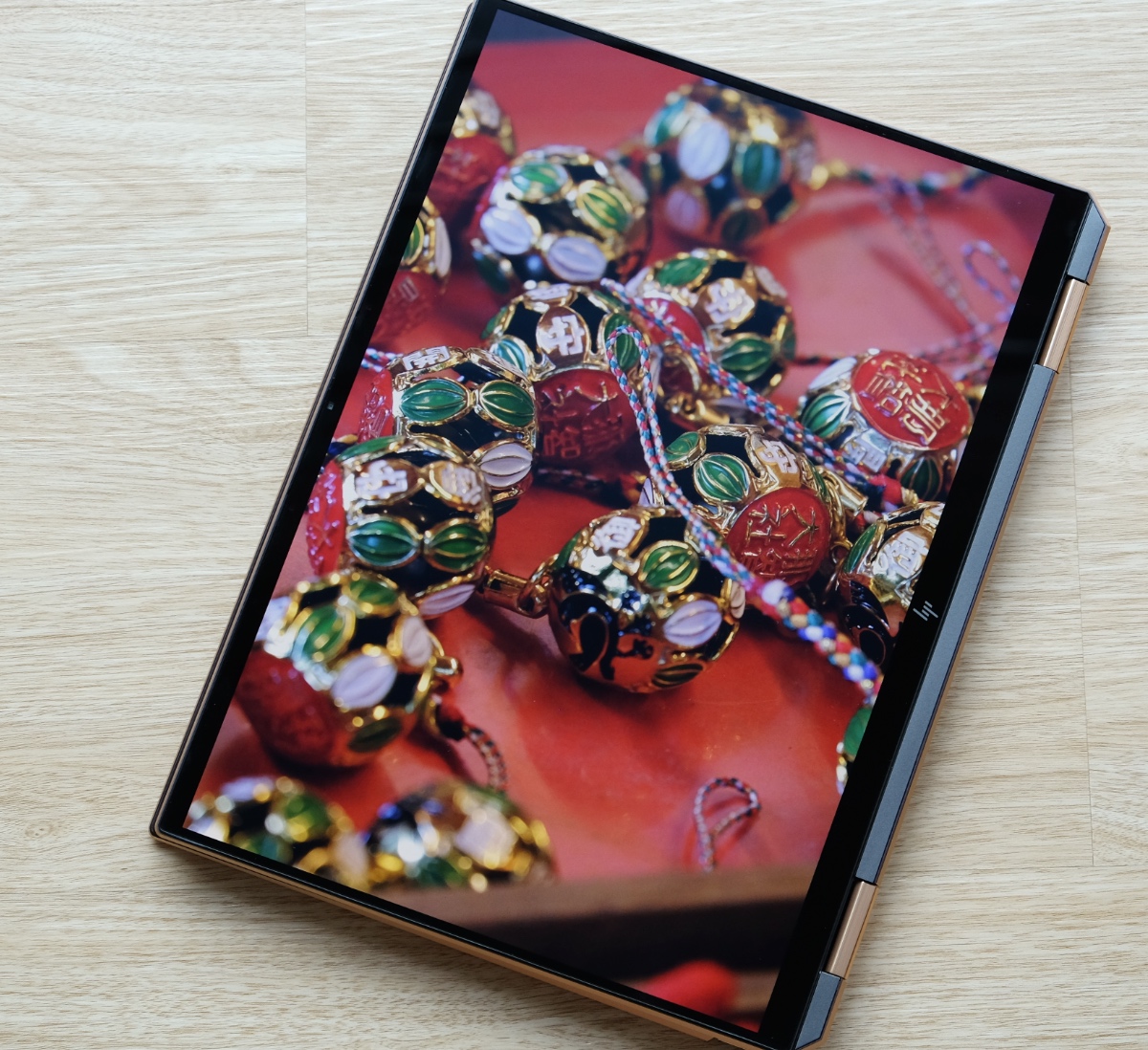 As you’d expect, the display looks fantastic. It’s high-resolution so images and text look super sharp. The colours look vivid and life-like too. There’s outstanding contrast and, predictably, blacks are a real highlight. Really, it’s hard to go back to a notebook with a conventional LCD once you experienced one with an OLED display. My only gripes are the rather thick bezels above and below the display, and that the display doesn’t seem to get quite as bright as the brightest notebook screens. But even with these shortcomings, this is an excellent display. Above the display is a 720p webcam, which, like most other notebooks, is fairly hopeless. But at least it supports Windows Hello logins. 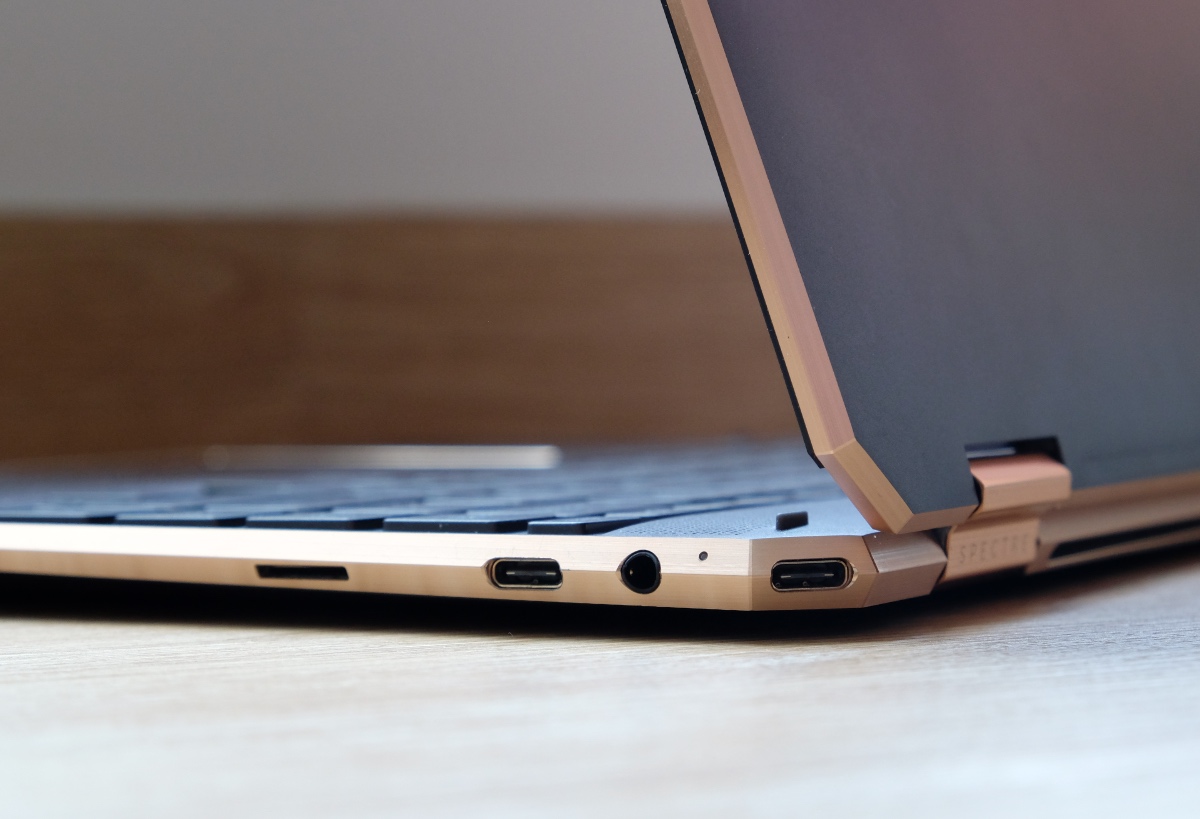 The Spectre x360 14 has a tapered body to create the illusion of it being thinner than it actually is. It’s 16.9mm at its chunkiest point, which sounds fairly thick, but only because it offers users a USB-A port capable of up to 10Gbps of throughput. Apart from that, there’s also two USB-C Thunderbolt 4 ports, a microSD card slot, and a 3.5mm audio combo jack. Certainly, slimmer notebooks exist, but these often only have USB-C ports which therefore necessitates the use of some kind of dongle to ensure compatibility with peripherals and USB external storage devices.

HP says the Spectre x360 14 comes with Bang Olufsen speakers and they are surprisingly good. I don’t normally write about notebook speakers because they are usually dreadful, but this notebook’s speakers can actually produce a palpable sense of bass and highs are half decent. Impressively, they don’t completely fall apart even at maximum volume. It's easily one of the better speakers I’ve heard on a notebook. 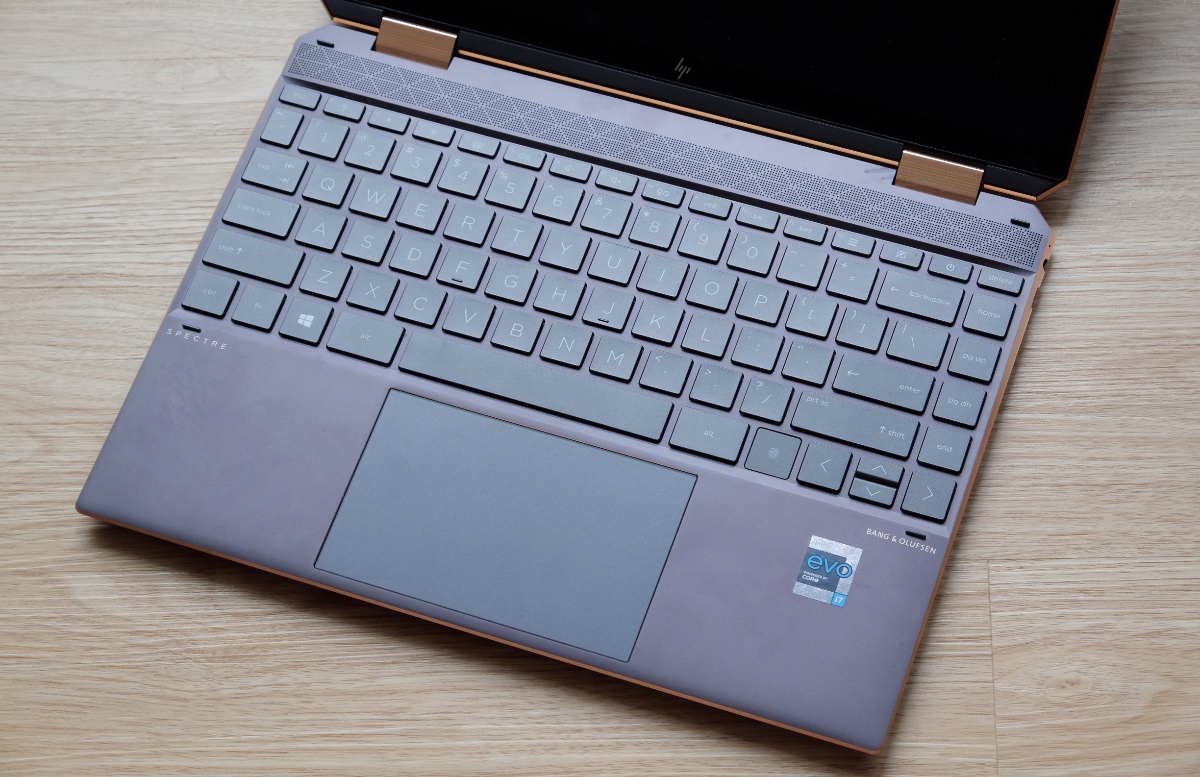 The Spectre x360 14’s keyboard is a peach. The keys, though flat, are large and are some of the best feeling. There’s a firmness and tactility to them that I appreciate. The layout, however, is slightly unconventional. To start, like ASUS’ ZenBooks, there’s an additional column of navigational keys to the right. But what’s really peculiar is that HP has decided to swap the right Control key out for the fingerprint scanner. It’s the first time I’ve seen any notebook do this. It didn’t bother me at all but it’s something to take note of if you happen to use the right Control key a lot. 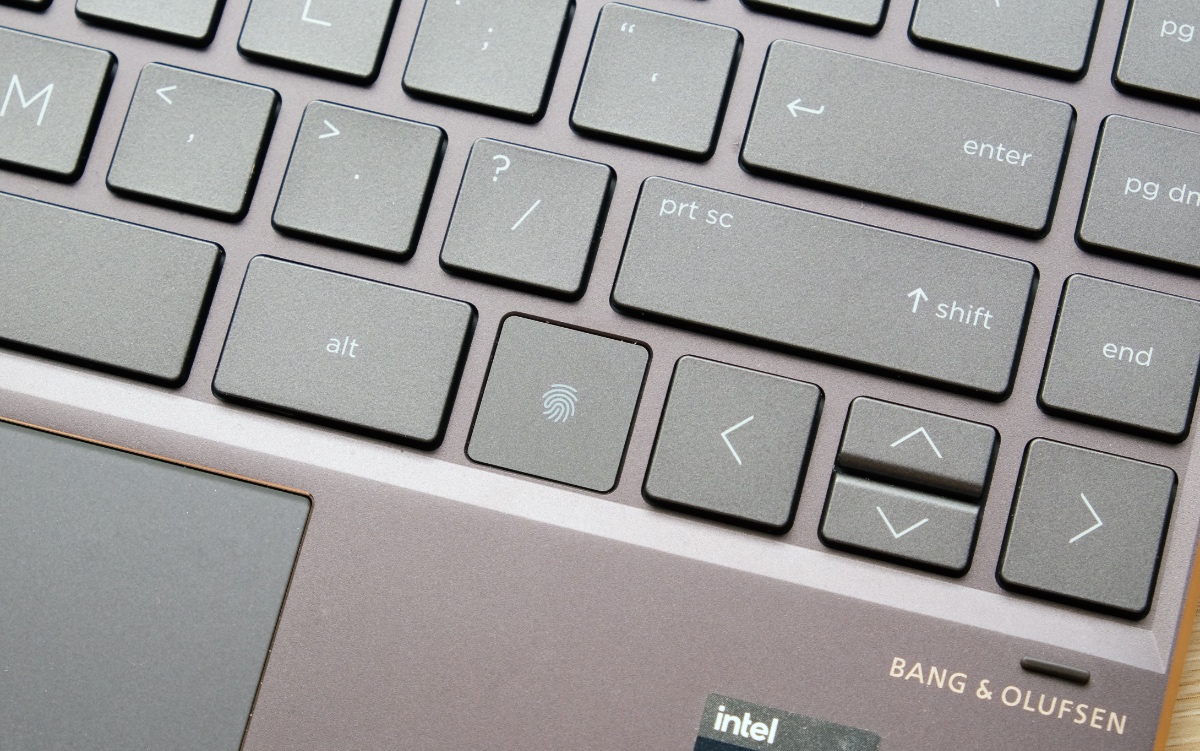 The trackpad is immense. I’ve been keeping records of trackpad sizes and it’s one of the largest in its class. Only the Lenovo Yoga Slim 7 Carbon and ZenBook 14X OLED have larger trackpads, and even then it’s only by a tad. Like the keyboard, the trackpad requires a firm click to actuate. But more importantly, it’s smooth, responsive, and accurate.