Note: This review was first published on 19 November 2021. 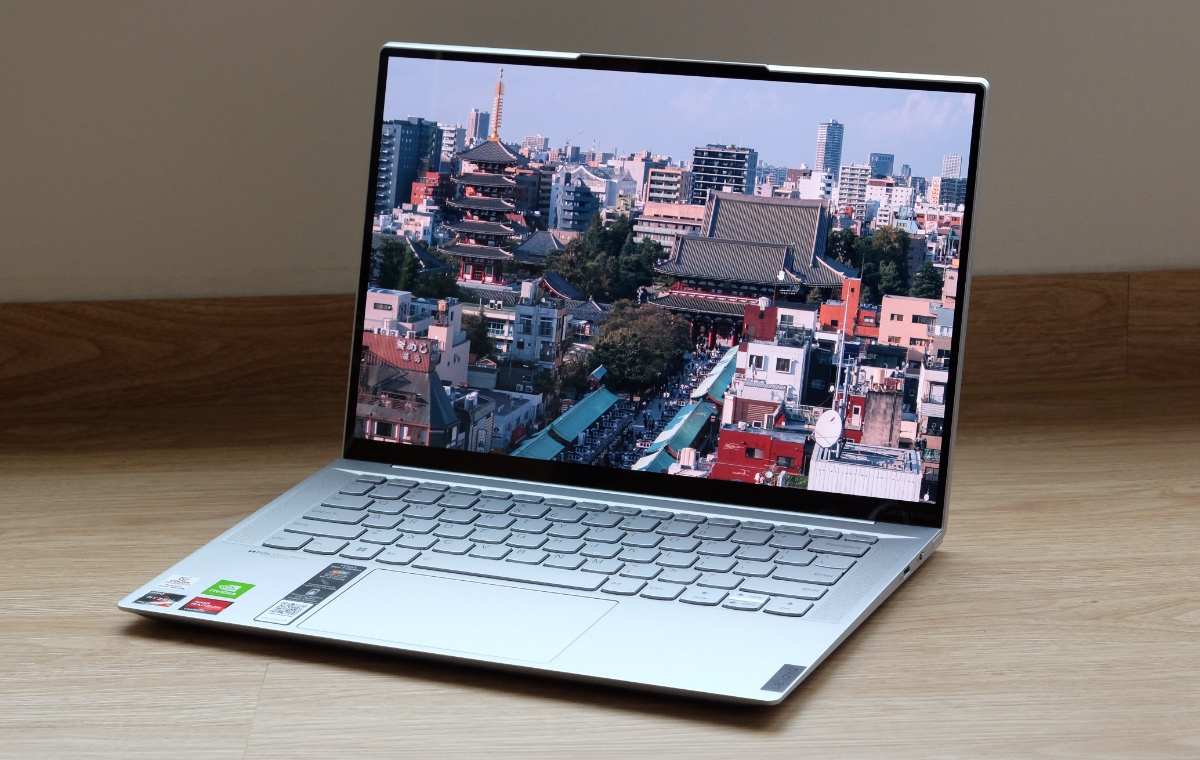 Last year, Lenovo’s Yoga Slim 7i Carbon won the Tech Awards in the Best Ultraportable Notebook category. They will surely be hoping to repeat the feat. So to say that a lot rests on the shoulders of this new notebook would be an understatement.

This is the Yoga Slim 7 Carbon. Yes, there’s no “i”. And yes, Lenovo’s names for its notebooks could be better. In fact, their lineup is becoming increasingly confusing. Anyhow, the important thing to know is that this is their latest flagship ultraportable notebook. It packs an OLED display and AMD’s latest mobile processors into a svelte and light body. In fact, Lenovo claims it’s the world’s lightest 14-inch OLED notebook. Let’s take a closer look. 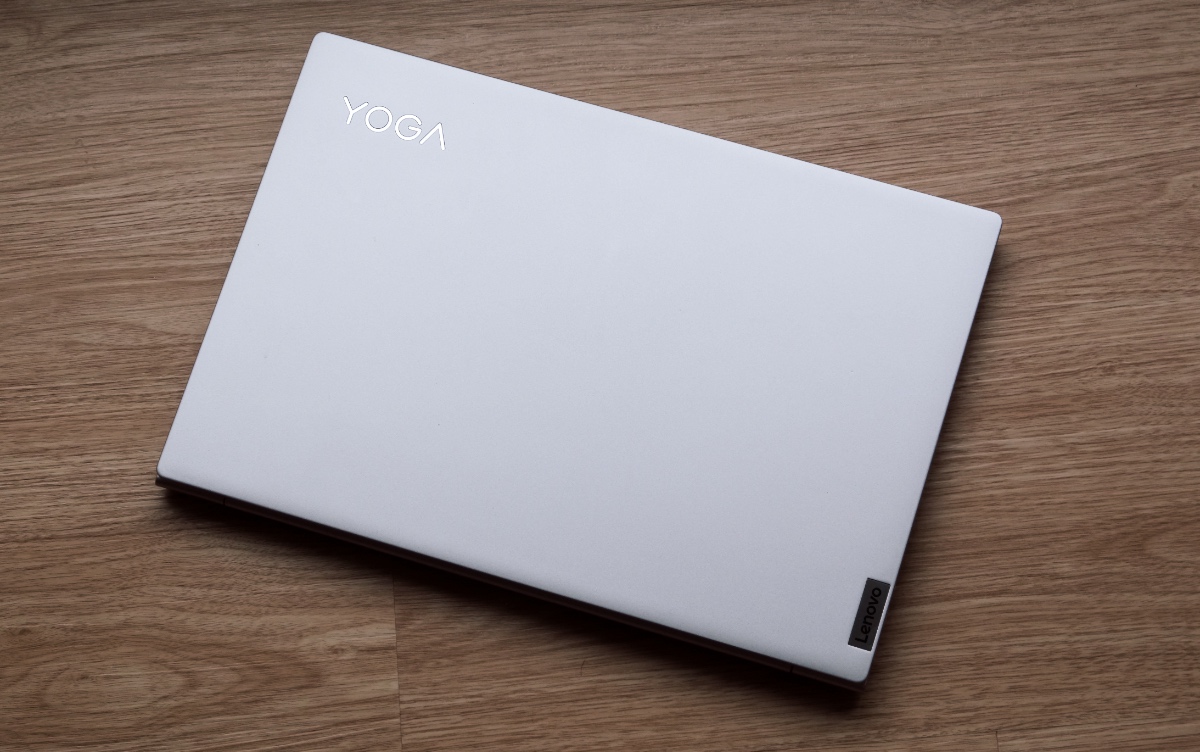 An interesting thing about the Yoga Slim 7 Carbon is that it’s powered by AMD’s Ryzen 5000 series processors. To be honest, these processors aren’t exactly new. They were announced earlier this year at CES 2021, but it is only now that they are popping up in more notebooks. You can blame that on the global chip shortage situation that’s affecting everything from notebooks to phones, networking devices, and even cars.

Four variants will be offered with prices starting at S$1,699. Here they are:

The unit I have is the range-topper with the Ryzen 7 5800U processor, 16GB of memory, 512GB storage, and NVIDIA GeForce MX450 discrete graphics.

Considering the specifications, the Yoga Slim 7 Carbon is priced attractively. Regardless of the model you pick, you get a high-resolution OLED display, 16GB of memory, and 512GB of storage. Some users will be dismayed that there’s no 1TB storage option and I certainly empathise with that. However, with so much of our content residing in the cloud these days, it shouldn’t be an issue for most users.

The Yoga Slim 7 Carbon isn’t the prettiest looking notebook. It’s offered only in Cloud Grey which is really just a fancy name for silver. It’s doesn’t look terrible but neither does it look exciting or particularly expensive in the same way a Dell XPS 13 or HP Spectre 13 does. I guess this isn’t a bad thing if you intend to mostly use it outside since it won’t draw unwanted attention. 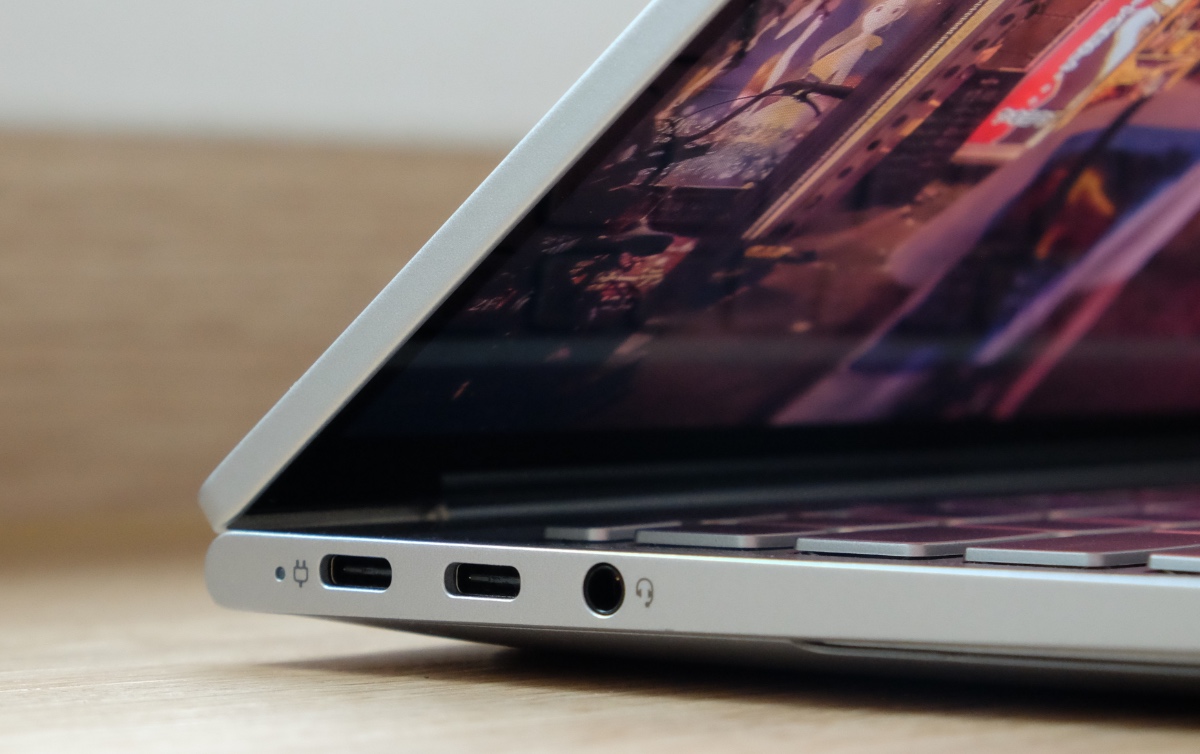 Lenovo claims this is the world’s lightest 14-inch OLED notebook. Thanks to a chassis made from aerospace-grade magnesium alloy and carbon fibre, the Yoga Slim 7 Carbon weighs just a smidge over a kilogram – 1.077kg, to be exact. That’s nearly over 300g less than the recently reviewed ASUS ZenBook 14X OLED which also has a 14-inch OLED display. Lenovo also says it meets the MIL-STD-810H standards of durability so it’s no fairy. The Yoga Slim 7 Carbon also lives up to its name of being slim, measuring just 14.9mm thick.

Its svelte dimensions does come with one major drawback and that’s ports. There are three USB-C ports and a 3.5mm audio combo jack. The problem here isn’t that there are only USB-C ports, it’s that they aren’t Thunderbolt ports. This means you can’t pair this notebook with fast Thunderbolt storage or docks, and you can’t use all three ports to charge. As it is, the ports support only the USB 3.2 Gen 2 standard, so you only get data transfer speeds of up to 10Gbps. Furthermore, only the two ports on the left support power charging and video output. The lone USB-C port on the right is only good for data transfer. It’s disappointing because last year’s Yoga Slim 7i Carbon had two Thunderbolt 4 ports, as do most rival premium and flagship-class ultraportable notebooks. Fortunately, wireless connectivity remains good as there’s support for Wi-Fi 6 (802.11ax) and Bluetooth 5.1. 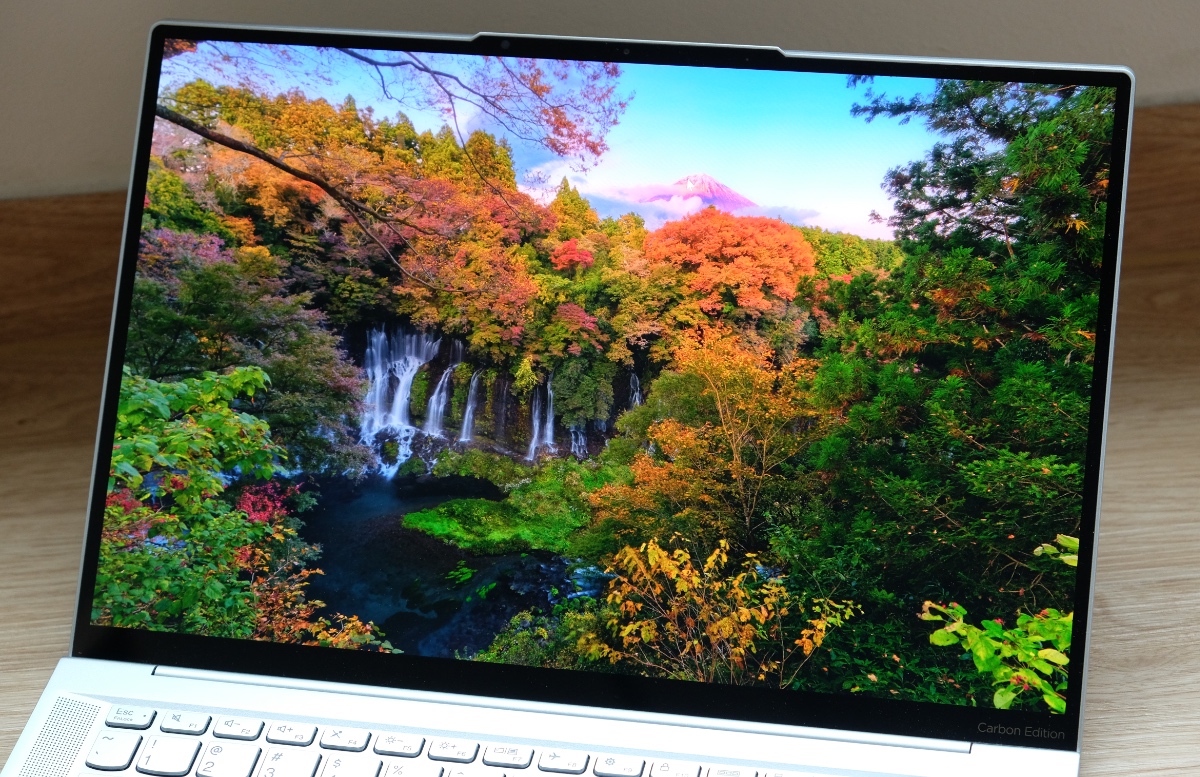 The display, however, is outstanding. It has an OLED panel with a 16:10 aspect ratio, 90Hz refresh rate, and a resolution of 2880 x 1800 pixels. It covers 100% of the P3 colour space and is Pantone-validated. It also meets VESA’s DisplayHDR 500 True Black specifications and has a peak brightness of 600 nits. If all of this sounds familiar, that’s because it’s exactly the same as the ASUS ZenBook 14X OLED. They must be using the same panel. However, unlike the ASUS, this doesn't support touch inputs. Without professional measuring tools, it’s hard to verify these claims but the display generally looks fantastic with crisp visuals and vivid colours. It gets bright and blacks are, well, inky black, as they should be.

Above the display is a 720p camera, which, like most notebook cameras, is quite hopeless. The images it produces are quite fuzzy and it gets even worse if the lighting is poor. On the upside, it has a ToF sensor and can be used for quick Windows Hello logins. 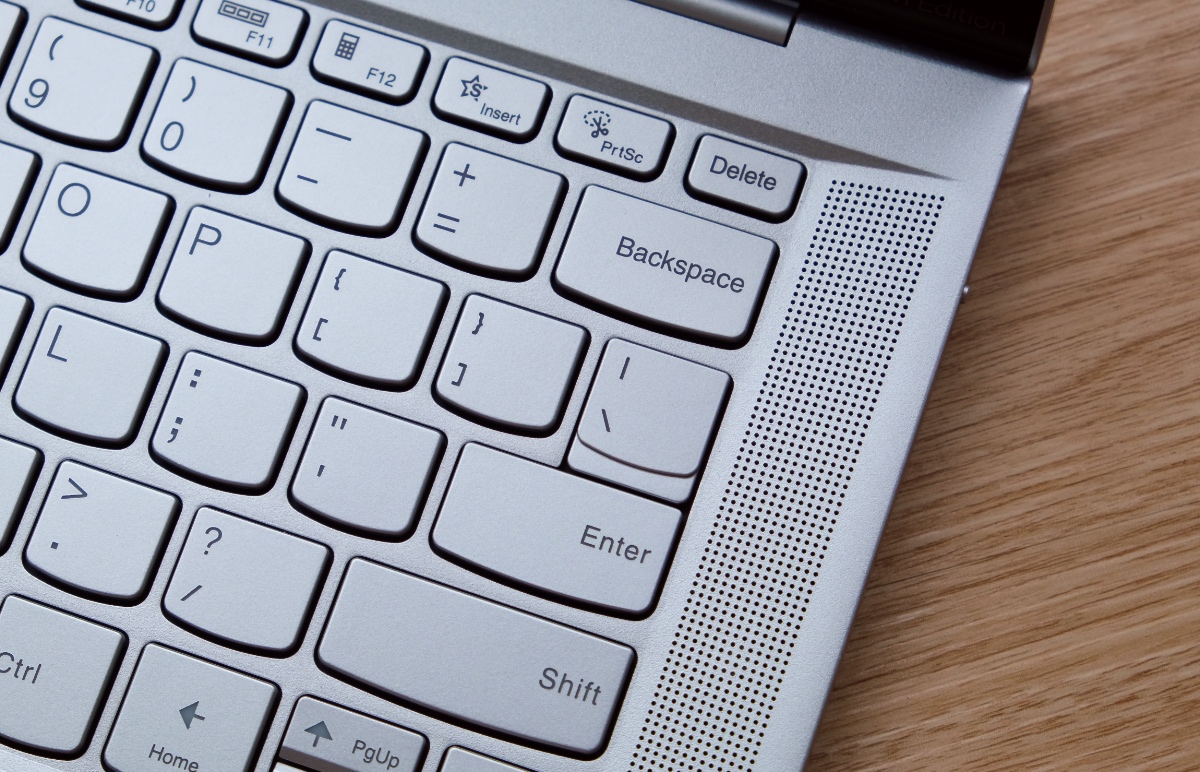 I don’t normally mention the speakers of notebooks because they are mostly dreadful. The speakers in the Yoga Slim 7 Carbon, however, are quite good. It has a two tweeter and woofer configuration and although it’s nowhere near as good as Apple’s new 14-inch MacBook Pro, its palpable sense of bass and ability to go loud without completely and utterly falling apart easily puts it in a class above its rivals. 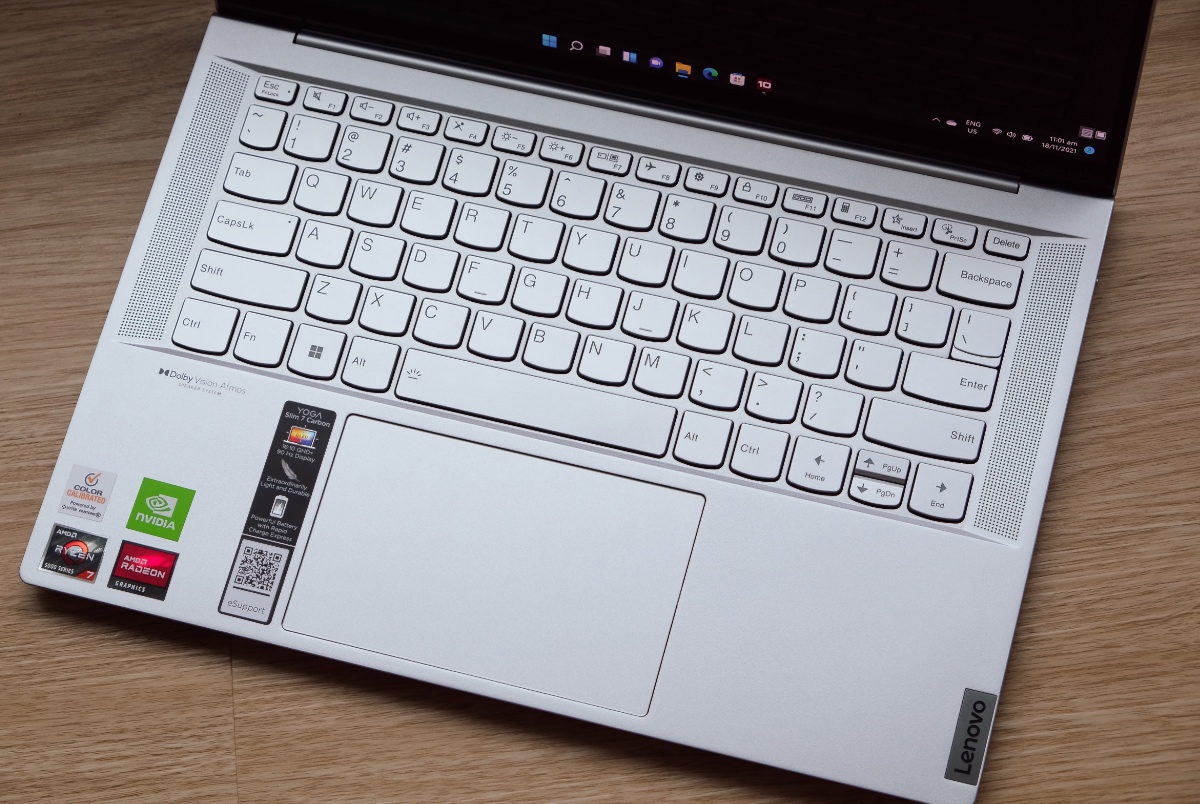 I’m always wary when a notebook manufacturer touts some newfangled keyboard switch. And in the Yoga Slim 7 Carbon, Lenovo says it has a TrueStrike keyboard with “a unique caterpillar mechanism and rubber dome switches.” I couldn’t find pictures of this mechanism to show you, but thankfully, it feels quite good and I haven’t had any issues with chatter or non-responsive keys. Though, admittedly, I have only been using it for the past week or so. Crucially, key feel is firm and positive, and it bottoms out with even pressure. The layout is standard but I think it could definitely do with larger “Enter” and “Backspace” keys.

The trackpad has been enlarged. It now measures 12cm by 7.5cm, which makes it one of the largest trackpads in its class. Tracking is faultless – it’s smooth, responsive, and accurate. The clicking mechanism, however, needs some work. Unlike the very best trackpads which can be clicked at any position, the top half of the trackpad isn’t too keen to register clicks.

Write a Review
Compare This | Specifications
Excellent performance
Gorgeous OLED display
Thin and light
Attractively priced
Nice keyboard & large trackpad
Above average speakers
USB-C ports don't support Thunderbolt
No touchscreen
Dismal webcam
Only half the trackpad can be clicked
Our articles may contain affiliate links. If you buy through these links, we may earn a small commission.
Sponsored Links