Note: This review was first published on 30 November 2021. 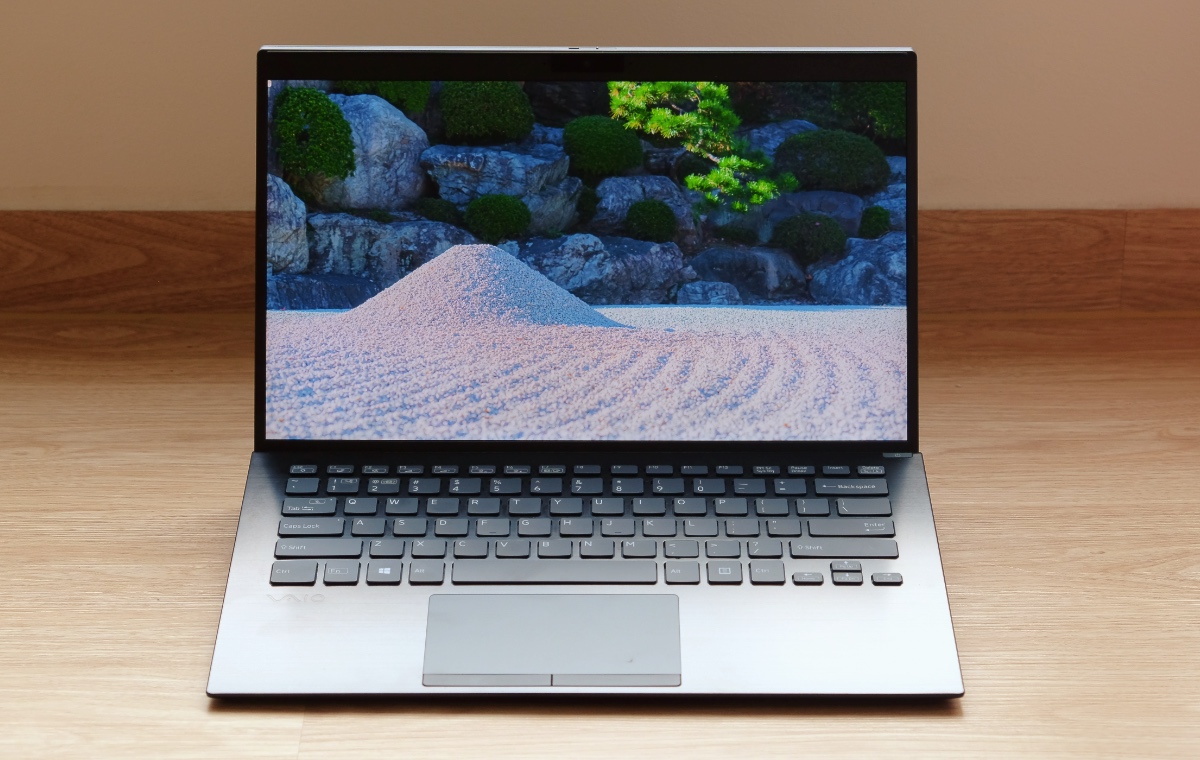 Does "Made in Japan" still count for anything?

If you are of a certain age, it’s impossible not to think of Sony when you see Vaio. For so long, Vaio has been Sony’s computer brand. It wasn’t a bad one either. They were pushing boundaries and were dabbling in convertible notebooks that melded the lines between tablets and notebooks even before Microsoft made its first Surface Pro. Want proof? Just look at the Tap 11 and Duo 11. Sadly, Sony couldn’t turn a profit and was forced to sell the Vaio business.

Now, Vaio notebooks are more conventional. They are built with a focus on performance, functionality, and portability – arguably the three most important aspects of any notebook. Some are still made in Japan, which is a rarity in today’s world where just about every notebook (or thing for that matter) is made in China. But does that label still carry any cachet? Let’s take a closer look at the Vaio SX14. 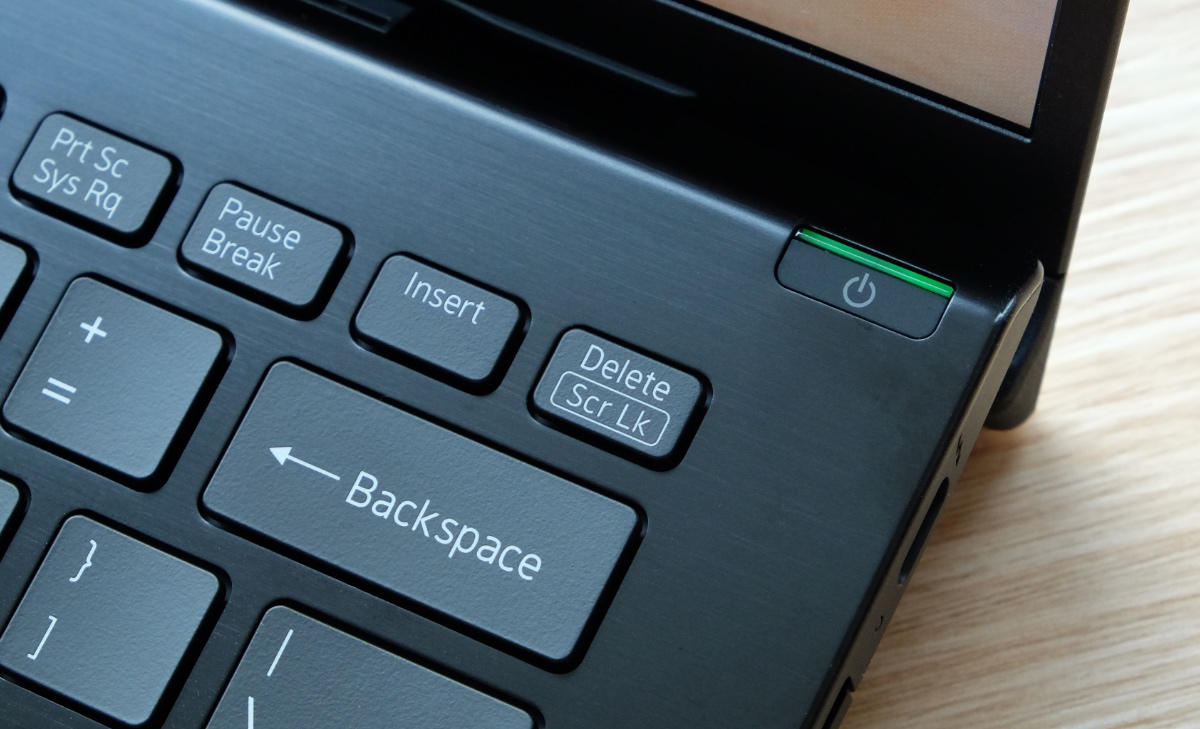 The Vaio SX14 will be available in two configurations with prices starting at S$2,999 (that “Made in Japan” label comes at a price). Both will feature Intel’s new “Tiger Lake-U Refresh” processors that come with slightly higher clock speeds. Here are the two configurations available.

The SX14 is one of the few notebooks that is still made in Vaio’s headquarters in Azumino City in Japan’s Nagano prefecture. The “Made in Japan” label used to mean a certain level of quality but with Chinese-made devices so good these days, it’s hard to say if “Made in Japan” still counts for something. But, since I’m a bit of a Japanophile myself, I can understand the appeal of having those magical three words on something you own. Certainly, the Vaio SX14 appears to be a well-made notebook. It doesn’t feel plasticky, and crucially, it feels solid and doesn’t flex unnervingly like some other carbon fibre notebooks do. 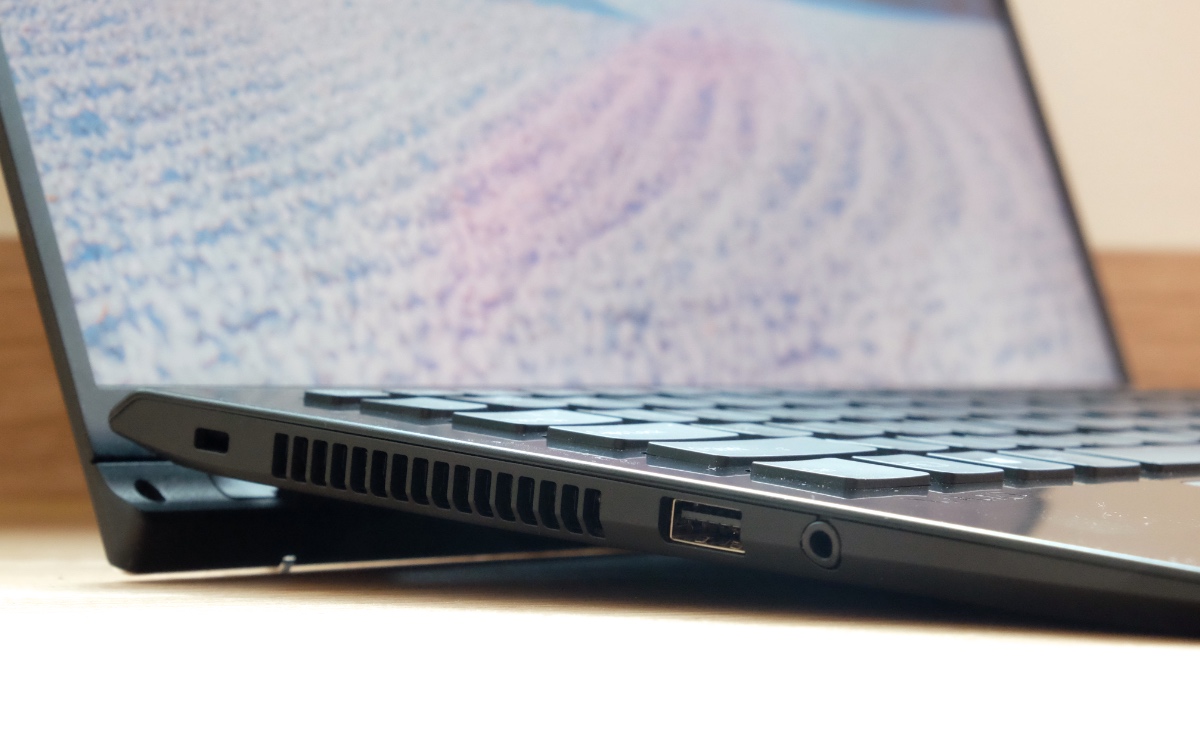 The SX14 has an all-new design that more closely resembles its pricier Vaio Z sibling. Japanese design can sometimes be quirky and it’s definitely the case here. Though the SX14 looks mostly like any other modern ultraportable notebook – that is to say slim and sleek – it does have some design elements from another era. Mainly, it’s the prominent vents on the side and rear. I can’t remember the last time I saw a notebook with vents like that. I also cannot remember the last time I saw any device that had a bright green power LED indicator.

The Vaio name was mostly built upon impossibly slim notebooks. The SX14 upholds this tradition. On paper, its maximum girth of 17.9mm sounds chunky but that’s because of its unusual hinge mechanism (more on this later). It tapers down to just 13.3mm and that number better represents its size. And because the chassis is made with a blend of resin and carbon fibre moulded components, the SX14 weighs just 1.086kg. And yet despite its petite form factor, it’s built to meet MIL-STD-810H standards so it’ll more than stand up to the rigours of normal daily use. 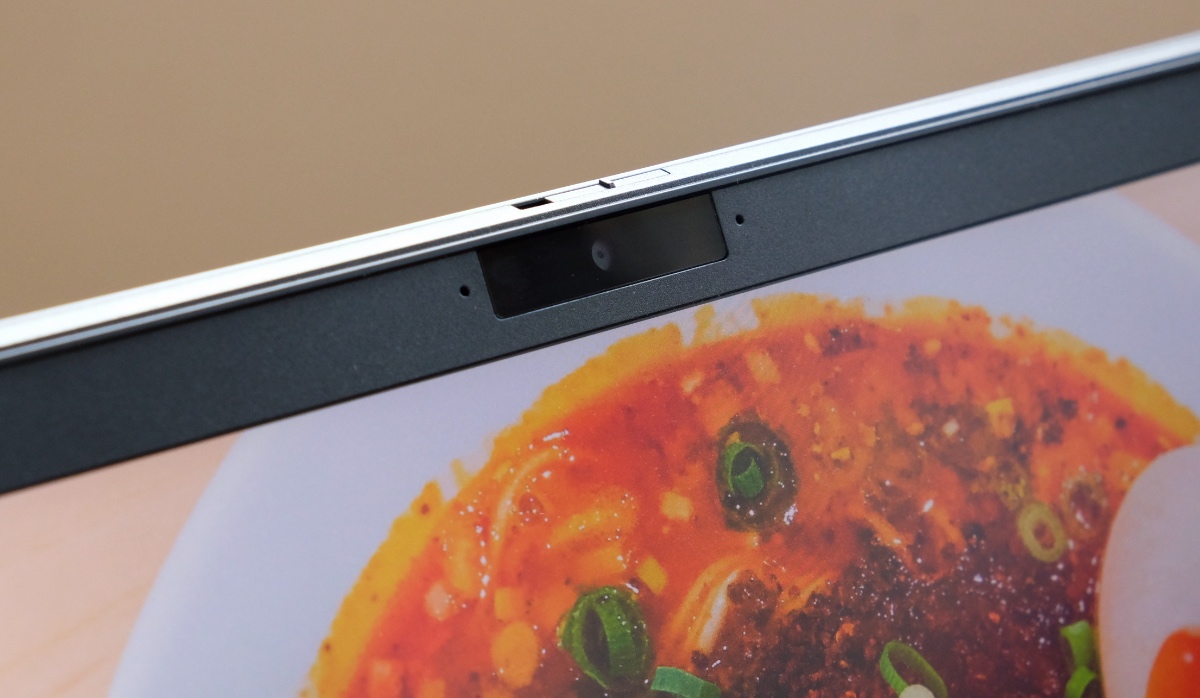 Another odd design quirk is the large bezel above the display. It looks out of place on a notebook in 2021 and it’s not as if it houses a particularly advanced webcam. Sure, it may be Full-HD, but the footage it captures still looks fuzzy. The only nice thing about is that it has a physical privacy shutter and that it supports Windows Hello logins. Speaking of Windows Hello, the power button doubles up as a fingerprint scanner. 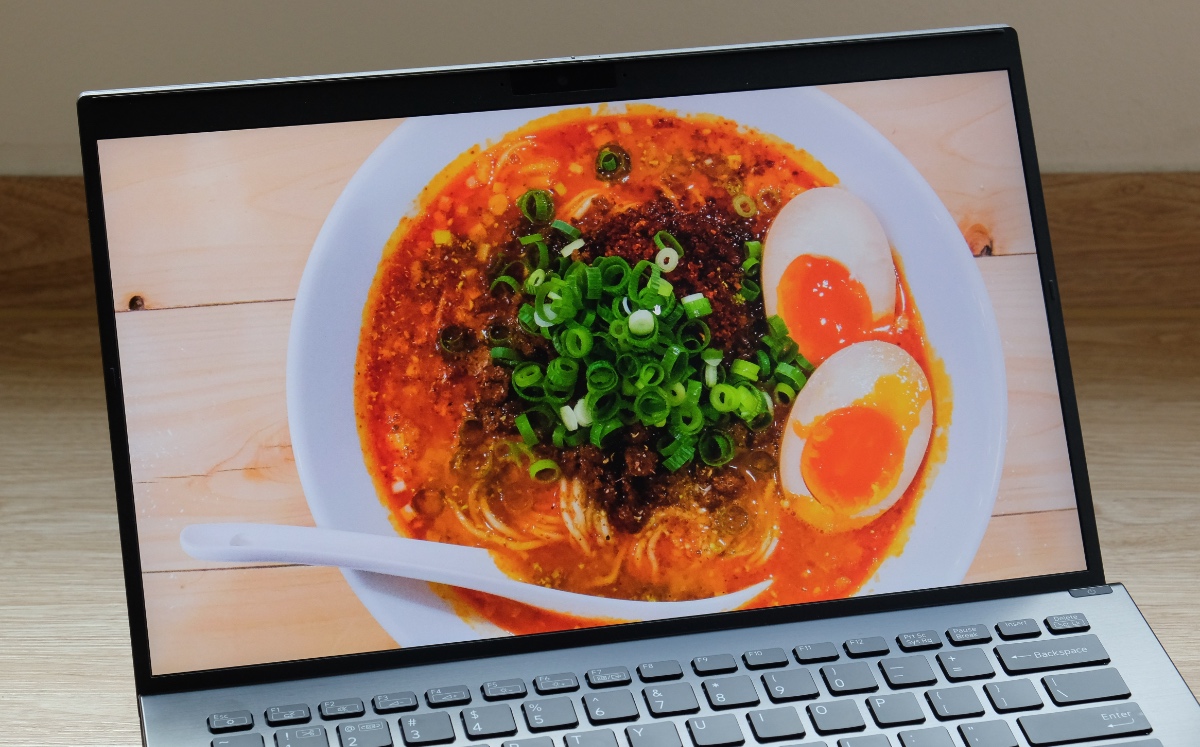 The 14-inch display on my unit supports 4K resolution and has a matte finish that resists glare and reflection well. It doesn’t support touch inputs. However, I’ve been told that initial units in Singapore will only be available with a non-touch Full-HD panel at first, with the possibility of touchscreen and 4K versions coming later. I can’t speak to the quality of those displays but this 4K one looks nice. It’s sharp, colours look natural, and it gets bright. Matte displays have the tendency to look washed out and less vibrant but not this one.

When you open the display, the display cover props the back of the notebook up by a couple of degrees. If this sounds familiar, it’s because ASUS’ notebooks have a similar feature which they call ErgoLift. Vaio’s implementation is more aggressive and my measurements indicate that it lifts the notebook up by about 2cm. The downside to this is that the SX14 is chunkier at the rear. The upside, however, is that there’s a greater lift angle so typing is more comfortable. Plus, it creates more space under the notebook so air ventilation is better, which may improve performance. 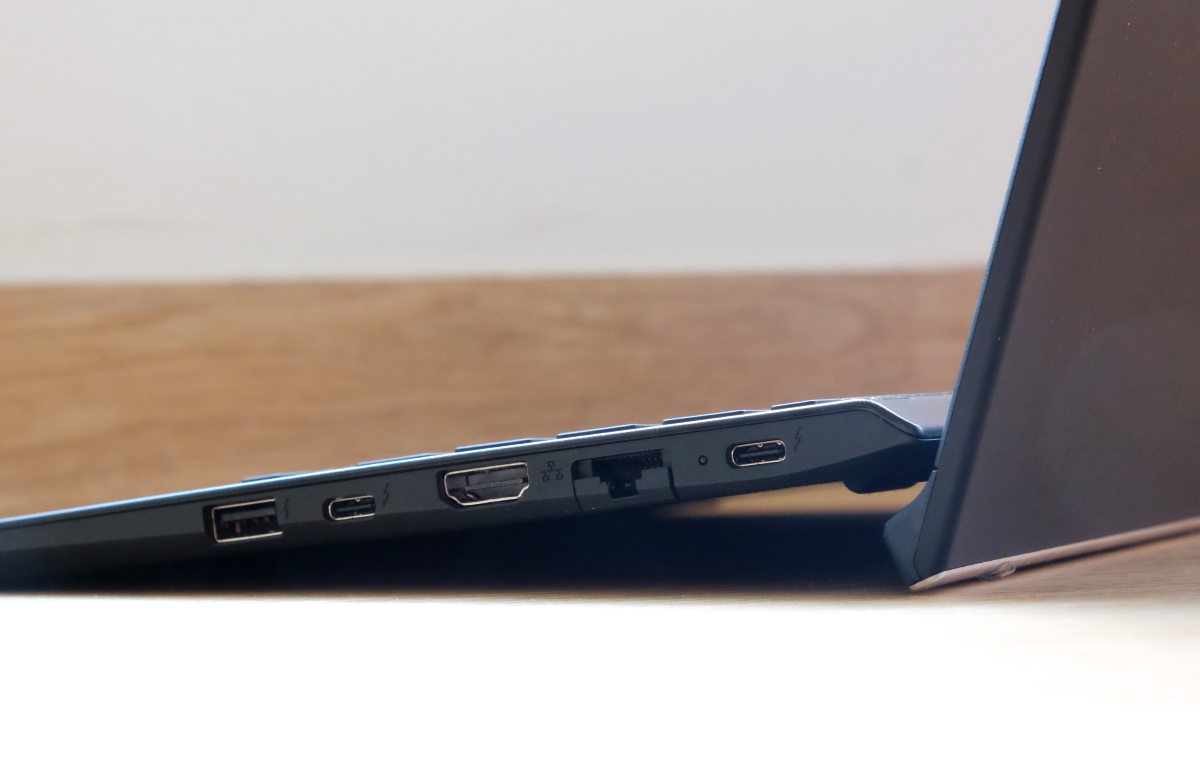 Amazingly, despite the SX14’s svelte dimensions, Vaio has managed to cram an impressive array of ports. On the right, there’s two USB-C Thunderbolt 4 ports, a single USB 3.1 USB-A port, a full-size HDMI port, and even a Gigabit Ethernet port. On the opposite side, there’s another USB 3.1 USB-A port and a 3.5mm headphone jack. Curiously missing is a memory card reader of some sort. Seeing that most ultraportable notebooks don’t have memory card readers, this isn’t a big loss. But if it were me, I would happily swap one of the USB-A ports or even the HDMI or Gigabit Ethernet port for a memory card reader.

Vaio has given the keyboard some nice touches. It’s slightly dished to guide your fingers and the keycaps are coated with a special coating that resists unsightly fingerprints and smudges. Additionally, the keycaps feature what Vaio says it is an exclusive typeface that’s more aesthetically pleasing and legible. The layout is conventional, the size of the keycaps is good, and there’s a good amount of key travel. The only minor letdown is that the key feel could be firmer and more positive. 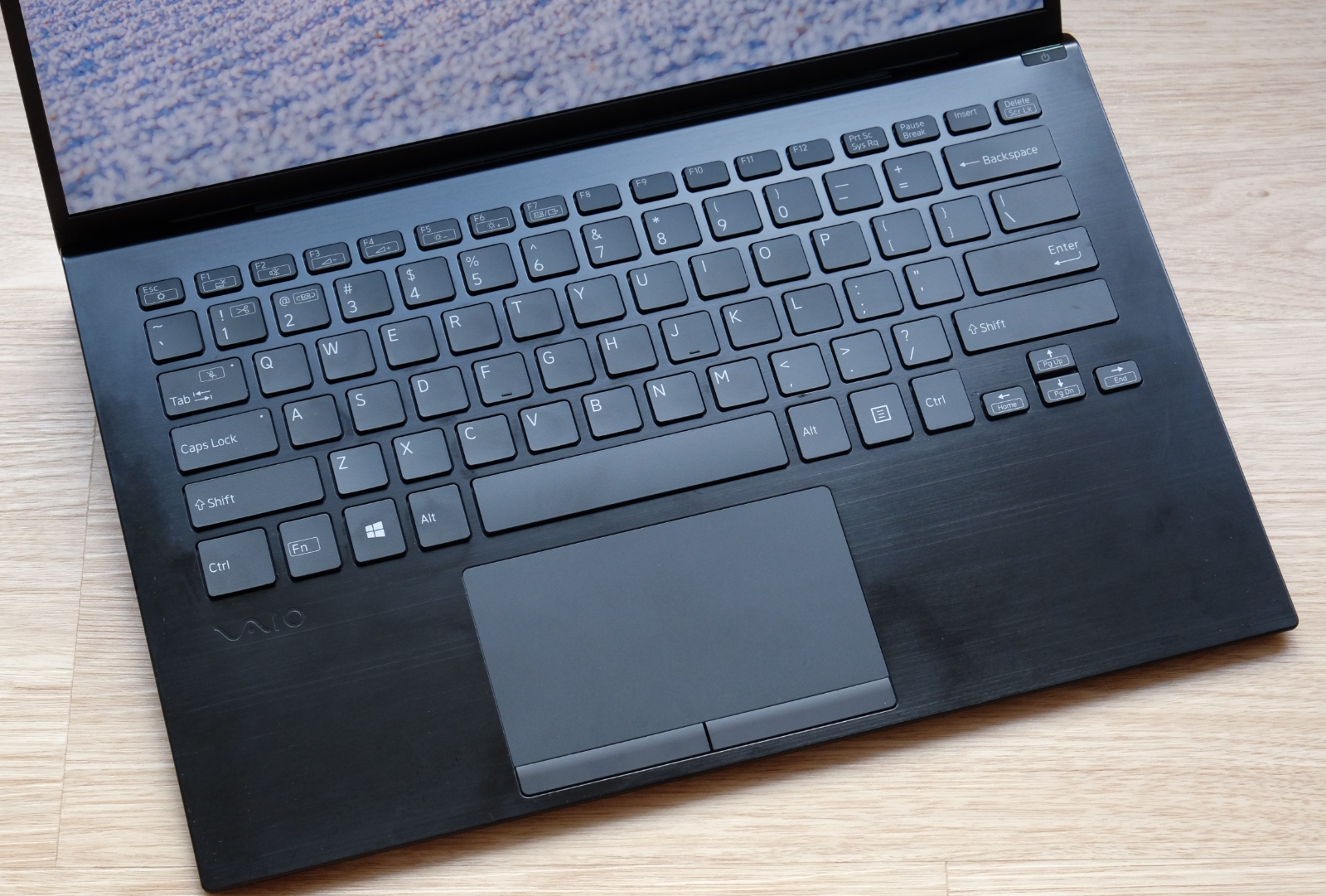 The trackpad is a real oddity because it is not clickable. Instead, it has dedicated left and right buttons. The buttons do impinge on the overall size of the trackpad somewhat, but it isn’t too bad. What’s more disconcerting is every time you try to click only to find that the trackpad doesn’t budge. Fortunately, it’s something you will probably get used to over time. And even if you don’t, you can configure the trackpad to recognise taps with a single finger as clicks. The trackpad itself is smooth and responsive enough, though it has the tendency to feel jumpy intermittently.

Write a Review
Compare This | Specifications
Incredibly light
Good performance & battery life
USB-C Thunderbolt 4 ports
USB-A and full-size HDMI, Ethernet ports
Camera has physical privacy shutter
Made in Japan
Expensive
Display only Full-HD (for now)
Non-clickable trackpad
Can be loud and warm
Our articles may contain affiliate links. If you buy through these links, we may earn a small commission.
Sponsored Links