Motherboards based on the X79 chipset had been making sneak previews on computer expositions worldwide since May of this year. Codenamed Patsburg, this highly anticipated chipset would finally replace the aging Intel X58 platform that now support high-end Nehalem and Westmere processors such as the Intel Core i7-980X and 990X.

The new Intel X79 platform will support the upcoming Sandy Bridge-E processors and it utilizes a massive LGA2011 CPU socket. These new processors should be available by late November, which will coincide with the availability of these new motherboards in retail. There's also the possibility that the Sandy Bridge-E processors may ship without any stock CPU coolers as Intel may be offering its own retail CPU coolers aimed at enthusiasts and overclockers. To us, that sounds logical enough since only high-end enthusiasts would be interested in a CPU this powerful and these folks are likely to purchase their own preferred third-party coolers.

While we've seen a number X79 motherboards on display while trawling through Computex 2011 and more recently in Intel's Developer Forum 2011, it wasn't until recently when we started getting motherboards to inspect up-close. The first to touch base in our lab is MSI’s X79A-GD65 (8D). With claims that it is the first board to support PCIe Gen 3, it has some interesting features which we will showcase in this pictorial.

If you've been following MSI's motherboard line-up in recent times, you would easily notice the familiar facade and color scheme used on the X79-GD65 (8D). Most of the board's layout also follows much of the tried and tested structure to maintain familiarity among enthusiasts.

On the X79 boards, the LGA2011 CPU socket occupies a good deal of real estate and is flanked by DIMM slots. Specific to the X79-GD65 (8D), you'll find not four, but a total of 8 DIMM slots - two pairs of DIMM slots on each side of the CPU socket. This interesting DIMM array separation is due to the fact that Sandy Bridge-E processors support quad-channel DDR3 memory. With eight DIMM slots on this board, it would mean each memory channel interfaces with two DIMM slots.

This unique layout seems to be a ubiquitous feature amongst the X79 motherboards we have seen to-date. The most recent being the boards we have seen at IDF 2011 in San Francisco, USA. It was also the first time we laid our eyes on the X79A-GD65 (8D), as well as other MSI variants such as the GD65 and GD45 (which these latter two sport only a total of four DIMM slots). We also highlighted boards from Gigabyte and Sapphire.

Further touching on the memory aspects, according to MSI's manual, the X79A-GD65 (8D) supports up to a maximum of 128GB of memory when installed with 16GB DIMMs. However, due to an issue with the chipset resource usage, the system will only detect 127+ GB of memory. We reckon that's more than enough memory most people would ever need, but we thought it would be an interesting note for you readers to . 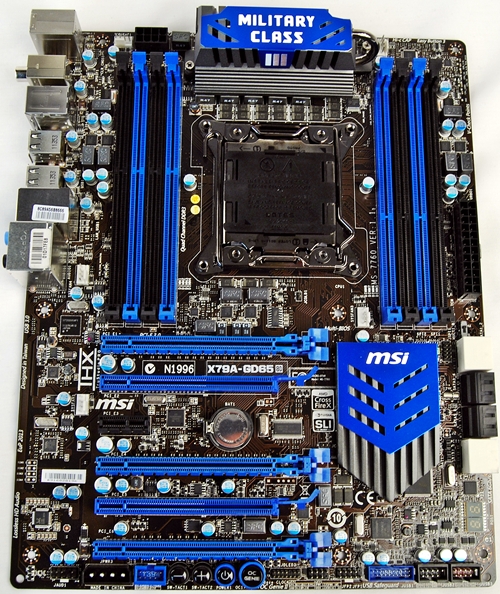 A Promotion to Military Class III

Until now, most of the top tier MSI motherboards boasted of Military Class II components, which comprise of using SFC (super ferrite chokes, first discussed here), Hi-c capacitors (first featured here) and the use of solid capacitors (which has become a norm in most boards). The new MSI X79A-GD65 (8D) is probably the first board to upgrade its Military Class status to version III by building on its existing suite of features and obtaining MIL-STD-810G certification that ensures components have been tested rigorously to meet US Department of Defense standards.

Further to that, MSI Military Class III standard also requires the use of the next generation of DrMOS - DrMOS II. To recall, DrMOS or otherwise known as Doctor MOS was the feature name to describe an integrated Driver-MOSFET package that combines three chips together: a driver IC, a high MOSFET and a low MOSFET. These components are vital components that regulate power to the processor, memory and a few other key components. Obviously, combining their functions to one packaged IC greatly increases power efficiency and increases performance as it can react to changes to power needs much more swiftly. All of these characteristics and vital functions are brought forward to DrMOS II, but this version integrates double thermal protection control. An LED warning will signal a 115 degrees Celsius temperature point for the integrated Driver-MOSFET chips and if it should increase any higher, auto shut down will be initiated at 130 degrees Celsius.

Taking a Leaf from the Competition

This motherboard has two independent BIOS ROMs, labelled A and B. The default BIOS is A, if it crashes due to a faulty flash operation, a toggle of this switch will allow the motherboard to boot from BIOS ROM B. Both sets of BIOS ROM need to be maintained manually and the switch must not be used when the system is powered. Users are warned only to toggle the switch when the system is switched off. 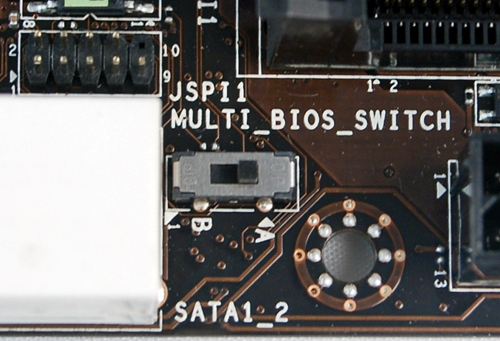 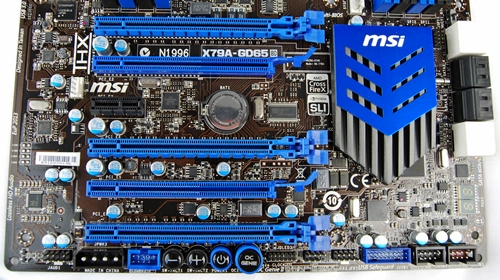