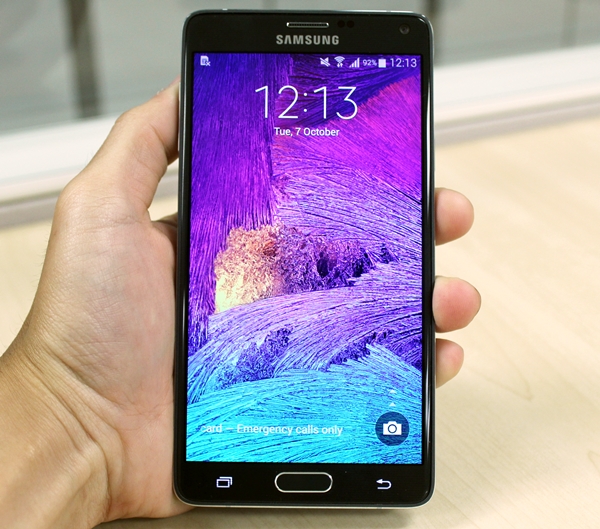 It has been three years since Samsung carved out the phablet category with its first Galaxy Note. Even though many phone makers (ASUS, HTC, Huawei, Nokia, Oppo, Sony and Xiaomi) have since jumped onto the bandwagon to deliver similar offerings, Samsung's Galaxy Note series continue to be the more popular choice, and more units are sold with every new generation.

However, this year, the playing field changes as Apple entered the fray with its 5.5-inch iPhone 6 Plus. Apple's new iPhone 6 models have had record breaking pre-orders and weekend sales, potentially putting a damper on Samsung's sales figured for the Galaxy Note 4. They need the Galaxy Note 4 to be a mega success to reverse falling profits and stay ahead of the competition.

Can the Galaxy Note 4 fend off the iPhone 6 Plus and bring up profits for Samsung? We'll soon find out, but before that, here's a quick look at four generations of Samsung Galaxy Notes:

(Note: We've done a hands-on article with the Note 4, so we'll only summarize the key points and additional observations here.)

The Galaxy Note 4 is among the new devices from Samsung that finally embraces a new design language that includes the use of metal. This concept was first introduced in the 4.7-inch Galaxy Alpha, believed by many to be an alternative to the 4.7-inch iPhone 6.

With the Note 4, the metal frame lends a premium look and feel. While it may not be fully clad in metal like the competition such as the HTC One (M8), the move will definitely please consumers wanting more from Samsung's flagship phones and is something we can definitely agree upon. 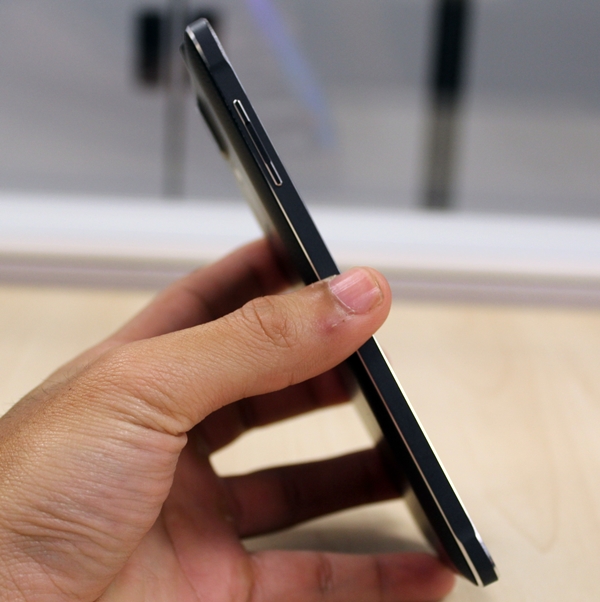 Another area of improvement is its rear cover. The Note 4 retains a soft-textured back design, but Samsung has done away with the faux leather feel and fake stitching along the rims. While initially incorporated as a touch of luxury, some have found it to be tacky. This new cover on the Note 4 solves that concern and while it may look like a minor change, it does make it more professional and business-like. It also helps that it actually feels better to the touch. 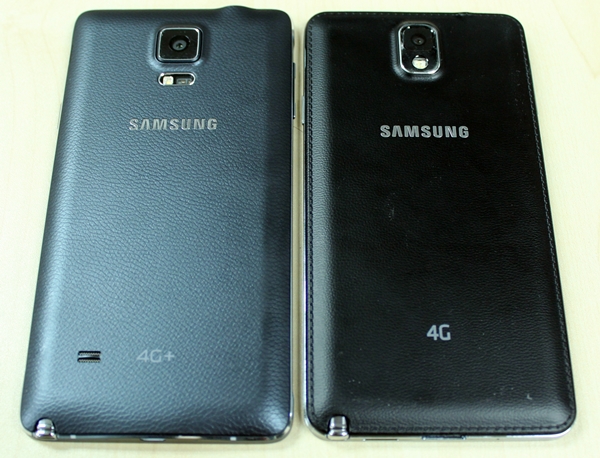 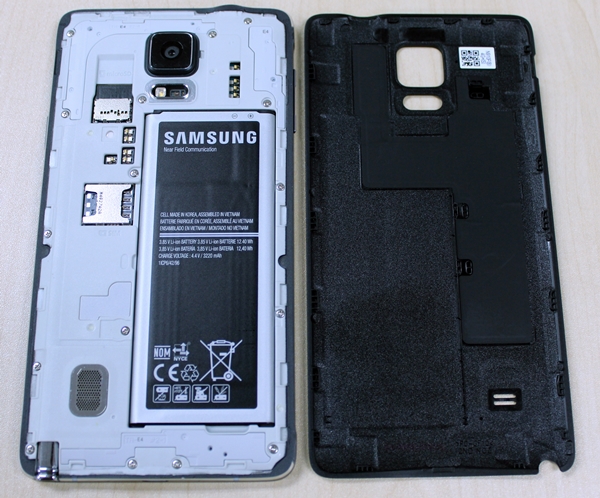 As with most Samsung's smartphones, the rear cover and battery are removable; there is a slit at the top left corner for you to easily pry open the cover. You'll get micro-SIM and microSD card slots to the left of the battery, and the Note 4 is able to support microSD cards up to 128GB in capacity, which means a maximum storage size of 160GB (inclusive of the 32GB internal storage). 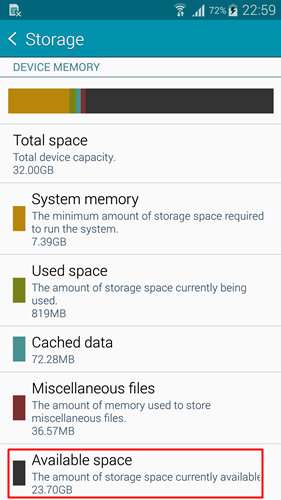 Besides this, there are three other physical hardware changes to the Note 4 that you should know of. The first is the addition of a heart rate sensor below the rear camera, while the second is a slightly bigger Home button due to the integration of an embedded fingerprint scanner. Lastly, Samsung has reverted to a standard micro-USB 2.0 port  on the Note 4 - the Note 3 came with a USB 3.0 port instead. We're not quite sure why they took a step backward as USB 3.0 is infinitely speedier when transferring larger media files, which you're bound to have on a premium device like the Note 4. 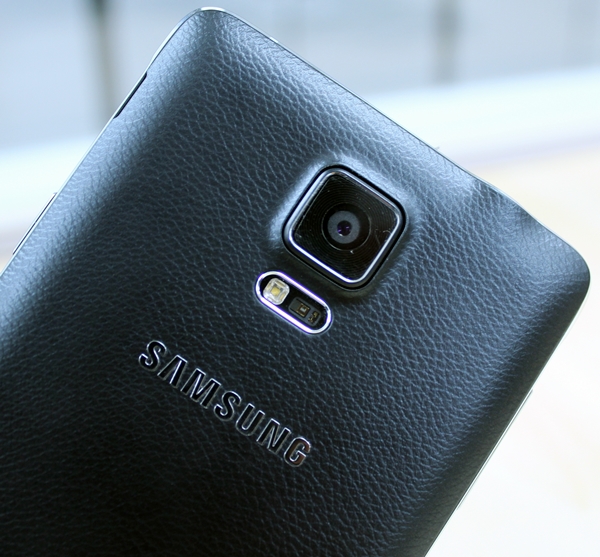 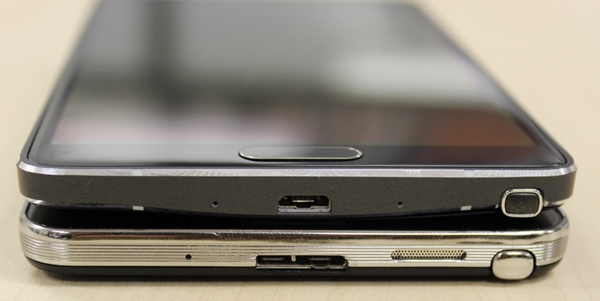 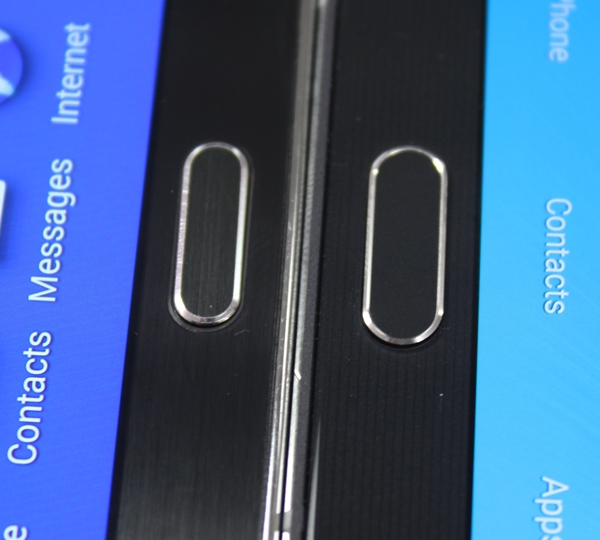 Physically, while Apple has been battling their #Bendgate issues on social media, Samsung's Note 4 has not escaped the scrutiny of internet sleuths. According to Korean publication iTToday, some Note 4 owners reported a gap between the screen and metal frame. Apparently, the gap is big enough to fit a business card. We did a check on our review unit of the Note 4 and these are our findings: 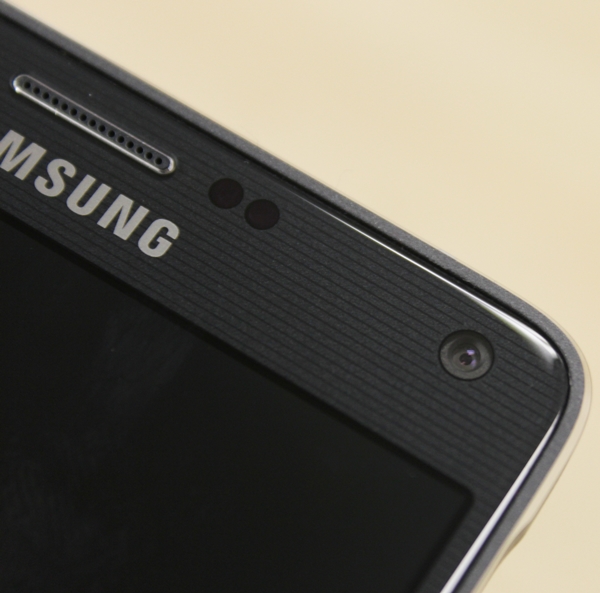 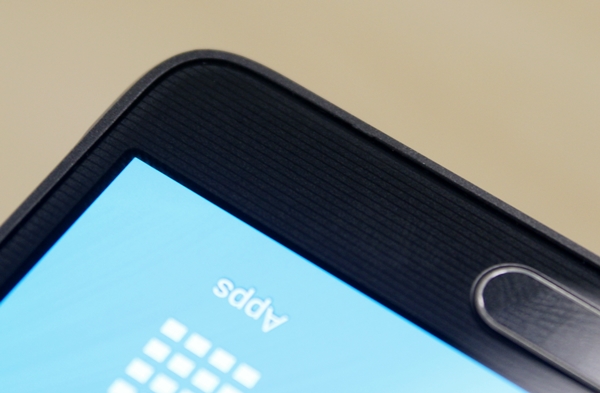 Before you jump to any conclusions about quality issues, it is noteworthy to mention that Samsung has acknowledged and even addressed this gap issue in its manual for the European Note 4. Thanks to Android Central, we have a glimpse of what the manual actually highlights:

This gap is a necessary manufacturing feature and some minor rocking or vibration of parts may occur. Over time, friction between parts may cause this gap to expand slightly.

A Samsung spokesperson told Android Central that the gap issue "does not impact the functionality or quality of the Galaxy Note 4". The Note 4 is not the only device facing such problems; the HTC One suffered from a gap issue between its cover and main body in 2013 while some local users of the Sony Xperia Z2 reported gaps between the front panel and frame of the device.

In terms of handling, the Note 4 fared pretty well against the 5.5-inch iPhone 6 Plus. We found the Note 4 easier to use in one hand thanks to a combination of hardware and software innovations. Despite having a larger 5.7-inch display, the Note 4 is approximately 5mm shorter and just a mere 0.8mm wider than its Apple counterpart. However, the Note 4 couldn't match the standards set by LG; its 5.5-inch G3 is 7mm shorter, 4mm narrower and 27g lighter. To date, the LG G3 still offers us the best large screen handling experience. 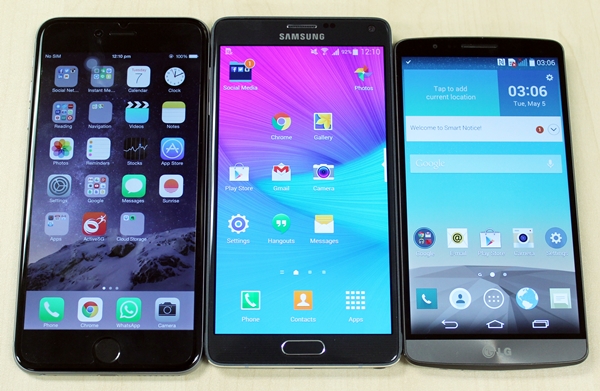 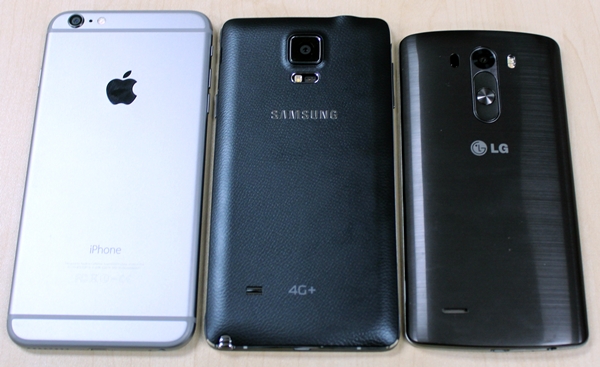 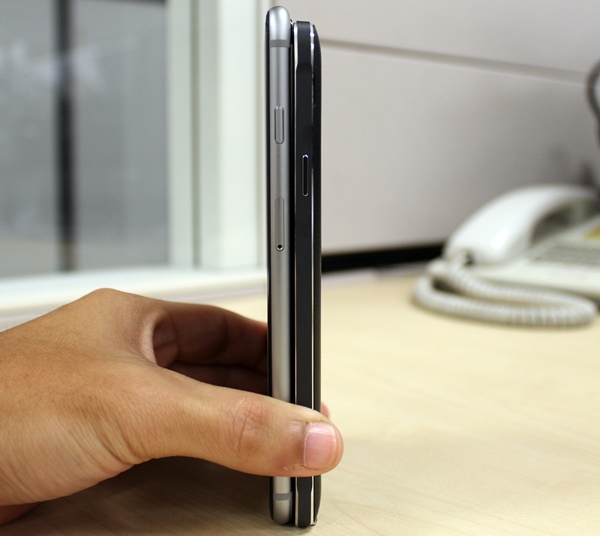 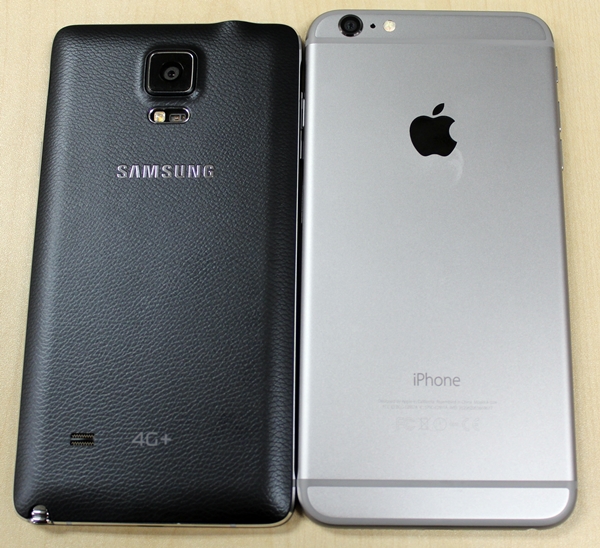 The Note 4 is the first Samsung's smartphone with a Quad-HD display to enter our market. Earlier this year, we had hopes that Samsung would bring in the Galaxy S5 LTE-A (SM-G906 SKU) model with a 5.1-inch QHD display. Unfortunately, only the Galaxy S5 4G+ (SM-G901) with a Full-HD display made it to our shores.

And it's one of the few times that Samsung has been late in the game; two other smartphones - the LG G3 and Oppo Find 7 - made it to our market with QHD displays a few months ahead of the Note 4. Better late than never, right? Still, as noted in our reviews or the LG G3 and Find 7, the bump in resolution doesn't necessarily equate to a noticeable improvement in viewing experience unless you place the Note 4 beside the Note 3. Even then, you have to look closely at the same content to discern the differences. 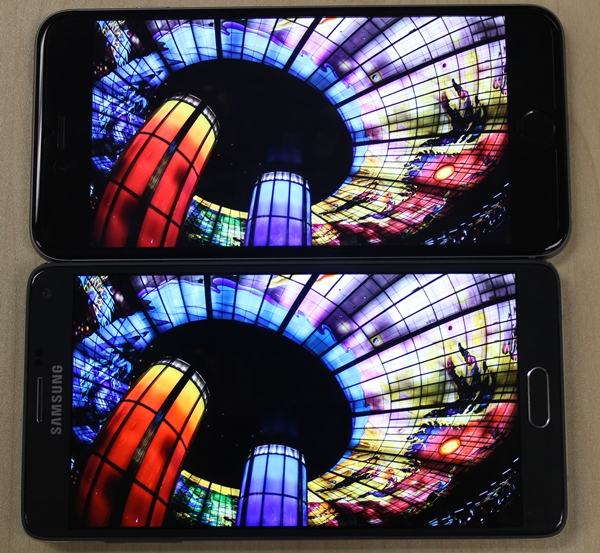 Pixels aside, there is an obvious improvement to the viewing experience and feel of the display that has nothing to do with resolution. Samsung decided to bring the 2.5D glass used on the Galaxy S III to the Note 4. As the glass is curved around the edges, swiping is smoother and gives a nicer feel compared to the Note 3. Unlike the iPhone 6 and 6 Plus where the glass panels seamlessly join the rounded edges of the aluminium chassis, the chamfered edges can feel a little sharp when you swipe to the edge. 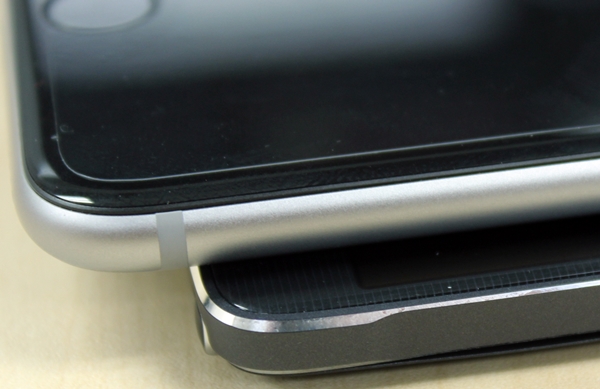 If you are concerned about over saturation on AMOLED displays, you can be well assured that the Note 4 gives you the option to select the best viewing mode to suit your usage. This is done through Adaptive Display, first found on Samsung's Galaxy Tab S tablets. Here's an excerpt from the review of the Galaxy Tab S 10.5 (LTE) on how Adaptive Display works:

Adaptive Display is developed by Samsung to automatically optimize the gamma, brightness, contrast and sharpness to suit different usage scenarios. You also have three other modes to select from: AMOLED Cinema, AMOLED Photo and Basic mode. AMOLED Photo mode is perhaps more suitable to attain a more balanced color saturation profile that some might prefer.