Another reason to go for the higher-end Surface Pro is that it comes with a full HD 1,920 x 1,080-pixel screen resolution, compared to the 1,366 x 768-pixel screen that’s on the Surface RT (both are of 16:9 aspect ratio). A capacitive touchscreen, it supports 10-point multi-touch (5-point for the Surface RT). This basically means that it’ll recognize each unique input from all ten fingers of your hands. While most people don’t need that for creating a PowerPoint slide or doing a pinch-to-zoom gesture, it can be useful in apps (piano apps, fruit-slicing games, sculpting apps, etc.) that require such multi-finger interaction. 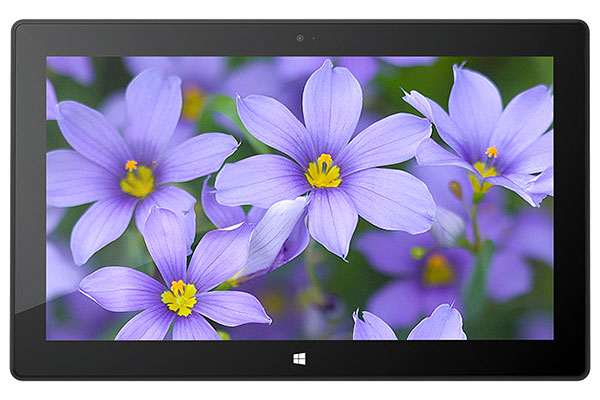 The Surface (both RT and Pro) has black bezels surrounding the LCD. At close to 2cm, it’s a necessary evil as it provides ample room for Windows 8 touch gestures whose starting point is at the edge of the screen (such as swiping in from the right to reveal the Charms bar). To make the transition from bezel to screen more seamless, a continuous sheet of glass (Gorilla Glass 2) that covers both Surface tablets is used as the topmost layer. In the middle of the bottom bezel is a Windows logo that also incorporates a capacitive touch sensor. This is a notch better than most other Windows 8 tablets or notebooks that come with a physical Windows button. It acts like the Start Charm: pressing it brings you to the Windows 8 Start screen wherever you are; pressing it again brings you back to where you came from.

Pen Input: Great, Depending on Who You Asked

Besides a capacitive touch layer, the Surface Pro also has an active digitizer layer that enables pen input (apparently based on Wacom’s Electro-Magnetic Resonance technology). For those who are confused, both the Surface RT and Surface Pro support a capacitive stylus, but only the latter has the EMR grid to support electromagnetic pen input. Besides higher accuracy (a digital pen has a tip just like a ballpoint, unlike a capacitive stylus where its tip typically mimics the shape of a fingertip), the US$30 Surface Pen that comes free with the Surface Pro supports 1,024 levels of pressure sensitivity, and this is sweet music to the ears of digital artists. Simply put, you can use the digital pen the same way as you would with real pens, where thickness/darkness of a line depends on how hard you press the pen on the screen, for example. The pen also has a ‘eraser’ top that works like a pencil eraser, allowing you to delete pen strokes, and a single button near the bottom of the barrel for simulating a right-click. When you’re using the pen, a very effective palm block technology also kicks in to reject unwanted hand touches on the screen. And if you so desire, you can use Windows 8's Second Screen (also known as Display Switch) function to project the image on a connected monitor. Because you can continue to write on the Surface Pro's screen even when it's turned off, it effectively becomes a pen tablet. 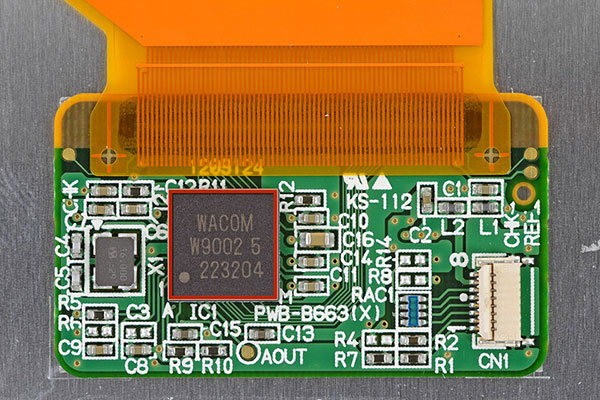 But here comes the bad news. Unless an app supports the new Windows Inbox drivers (that is, drivers that come with the OS) and Ink APIs (application programming interfaces), advanced features like pen pressure and eraser don’t work, let alone things like tilt, rotation, touch pan and zoom that many professional digital artists rely on. For pressure sensitivity, Autodesk’s SketchBook Pro 6 works, so does AmbientDesign’s Artrage 4. But it doesn’t work in - drum roll - Adobe’s Photoshop, Pixologic’s ZBrush, or any of Toon Boom Animation’s software.

Of course, the list of what works and what doesn’t is longer than what we’ve mentioned here - so if the digital pen is your number one reason for buying the Surface Pro, our advice is to do a bit of research to find out if your software of choice works first.

Fortunately, there’s light at the end of the tunnel. Microsoft has gone on record (here, and more recently, here) to say that it’s working with Wacom to provide a Wintab driver for the Surface Pro. When that happens, the Surface Pro will regain the pressure feature on apps that rely on the Wintab APIs, and maybe other advanced features like touch pan and zoom. Another scenario that could pan out is that Microsoft successfully persuades app developers to use its new APIs, but we feel that’s quite unlikely.

Update: Wacom has on May 9 released a new Windows 8 driver for systems that use Wacom's Feel IT technology. While it doesn't mention anything about the Surface Pro, we've verified that it does indeed work on the tablet, and it brings pen pressure sensitivity for apps like Photoshop. At the moment, the driver isn't available over Windows Update. You can read more about this news here.

For non-digital artists though, this is of course a non-issue, and the presence of the digital pen should be chalked up as a plus. You can use it to select small screen elements, navigate the UI, and the like. For writing of notes and sketching of ideas in apps like OneNote, the Surface Pen performs brilliantly, and that's great news for students and business users alike.

Protip: Misplaced your Surface Pen? If you've a Samsung Galaxy Note (which also uses a Wacom digitizer), its stylus is a good stop gap.

The Issue with 150% DPI Desktop Scaling

Remember that at the beginning of this section, we said that one huge advantage the Surface Pro has over the Surface RT is its full HD 1,920 x 1,080-pixel screen? Generally, a higher-res screen means more screen real estate, which in turn means you can fit more stuff (data, controls, toolbars, windows - you get the idea) on the screen at any one time. However, to maintain good usability, screen size should also be taken into account. So, it doesn’t make sense to shrink the physical size of UI elements on a small screen to fit more data just because it has a high PPI (pixels per inch) spec, because that will make touch elements hard to hit and text too small to read.

But that’s not to say there’s no point having the full HD screen. Up close, the pixel structure of the Surface RT’s 1,366 x 768-pixel screen is more evident, and text certainly looks sharper on the Surface Pro. Notice we said ‘up close’, and that’s coming from a reviewer with 20/20 vision.

Interestingly, at the desktop environment, the Surface Pro also looks remarkably similar to the Surface RT. And that’s because the former ships with desktop scaling set at 150%. The reason for not doing 100% is because that will make text and other on-screen elements too tiny (to read and to tap) on a 10.6-inch screen.

(For those interested, Apple uses 200% for its products that use a ‘Retina display’, such as the 13.3-inch MacBook Pro with Retina Display. Even though it has an insane native resolution of 2,560 x 1600 pixels, the default screen estate is the same as what you get on a regular MacBook Pro with a 1,280 x 800-pixel screen. Of course, the former still looks sharper, provided matching high-res assets are used.) 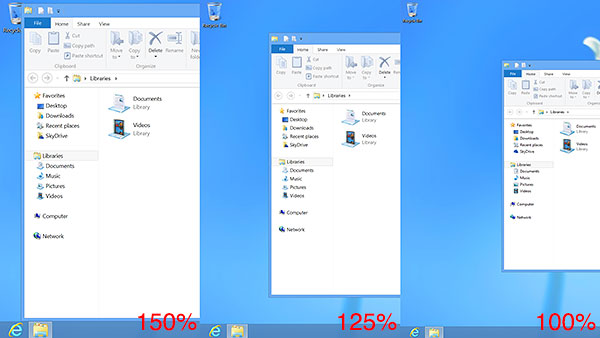 But a 100% scaling is exactly what you want when you hook up the Surface Pro to an external large-screen monitor. However, such desktop scaling can’t be done on the fly; after selecting the scale factor (100%, 125%, or 150%), you need to sign out and sign in again for the change to take effect. But that’s a minor inconvenience that we can live with.

The bigger problem is that not all desktop apps resize well. Some apps (like Photoshop) totally ignore the scale factor, while some apps (like Spotify) obey it, but ends up with blurry text and icons. 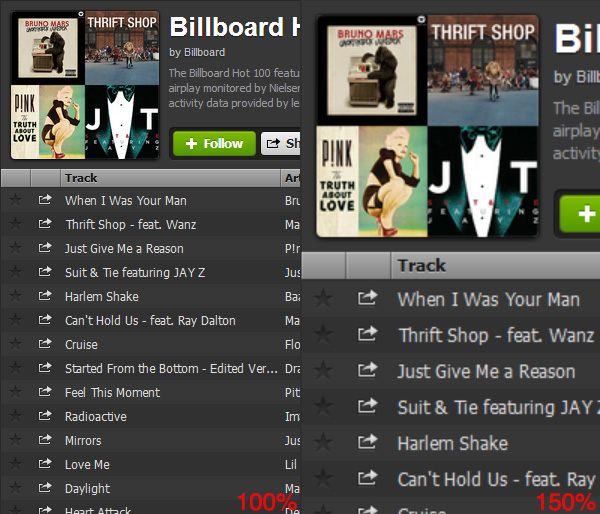 There’s also trouble brewing in multi-monitor land. If you aren’t using the Surface Pro’s screen (the Screen Resolution control panel allows you to project on only one display), switching the desktop scaling to 100% makes sense, as this allows for the maximum amount of content to be shown on the external monitor. Readability isn’t sacrificed because of the larger physical size of this display. Furthermore, the Modern environment now takes into account of the larger display. For example, on our 23-inch 1080p monitor, the Start screen now shows six rows of tiles.

But what if you want to use the external monitor in an extended desktop mode? Sadly, there’s no way as of now for each display to have its own scale factor. That means, if the Surface Pro’s desktop scaling is set at 150%, the external monitor will have to use that too. On our 23-inch monitor, the larger on-screen elements still looked okay, but they became comically oversized as the monitor got larger. To make best use of the larger display’s real estate, we had to switch to 100%; but now, the on-screen elements on the Surface Pro’s desktop became woefully small. There’s a 125% setting which can be used as a middle ground, but what’s really needed is a feature that lets the user set the scaling factor of the built-in and external displays independently.

The good news is, Microsoft’s Panos Panay, who is in charge of the Surface team, has acknowledged this and said that they’re working on a fix during a Reddit chat in February. During the chat, he also shared how he uses the Surface Pro with an external monitor, so check it out for more tips. 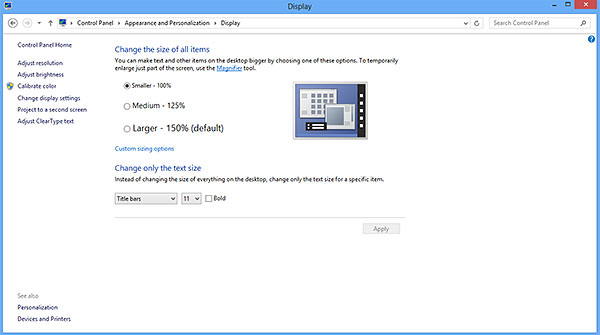