Despite being difficult to buy, Sony has sold over 10 million PS5 consoles
Event Coverage

When Ultrabooks came onto the scene in late 2011, they seemed to be perfect laptops. They're thin, sexy notebooks that are so portable that you’d think nothing of simply chucking them into your bag. The new Intel third generation 'Ivy Bridge' consumer ultra-low-voltage processors (compulsory in Ultrabooks) in the machines are also powerful enough to handle all the daily productivity and content creation tasks you can throw at it.

These premium machines even have SSDs that supercharge the read and write speeds over the conventional hard drive, resulting in faster boot, resume, and file transfer times. So instead of waiting for business executives to bring their own Ultrabooks into the office, manufacturers decided to bring all the goodness of Ultrabooks, into the enterprise environment - hence this Business Ultrabook category. The average business Ultrabook looks and behaves like regular Ultrabooks, but they offer increased security functions necessary for the enterprise environment.

Last year’s Best Enterprise Notebook award recipient, the Toshiba Portege R830, had one major quality that was essential for road warriors - superb battery life. However, because the 13-inch enterprise ready machines in this lineup are all Ultrabooks, just having a good battery life isn't enough anymore. The build quality, durability, portability, and other additional features also play important roles in determining the winner.

The Lenovo ThinkPad X1 Carbon is a solidly built, thin and light (1.36kg) machine. It’s so well built that if we didn’t factor in battery life, it would have won the category hands down. It’s got a much smaller 45.8Wh battery, which under the Powermark benchmark, lasted for 3 hours and 41 minutes. Luckily for the X1 Carbon, its patented charging technology (Lenovo Rapid Charge) lets you fill it up to 80% in around half an hour. The benefit of this technology might not be immediately obvious to users, but it will come in extremely handy when you need it, especially if you travel often.

Thankfully, that’s not where Lenovo stopped at for the X1 Carbon. Open up the machine and you will see the Accutype backlit keyboard. This keyboard is not as comfortable as the one on the Dell 6430u, but it’s not far off. Keys are not too shallow for an Ultrabook, and offer plenty of feedback. They are also slightly indented, which allows for a better feel, thus improving accuracy of typing. And unlike some of the other enterprise notebooks, the X1 Carbon also comes with a large clickable trackpad. All of these small design aspects add up to providing a good user experience.

If you compare it against consumer Ultrabooks with similar components, the Lenovo Thinkpad X1 Carbon might seem a bit pricey (S$2,349) and it's not a top performer across the board. However, if you pit it against other enterprise notebooks, its value comes through. Robust build, premium materials, security features, and a high-res (1600 x 900 pixels) display. All-in-all, every aspect of X1 Carbon suggests that it would cost much more, but Lenovo managed to suppress the price of the X1 to a level that’s more palatable. The only thing that the Lenovo ThinkPad X1 Carbon needs are more connectivity ports. It’s only got one DisplayPort and two USB ports, and which only one of them is a USB 3.0 port. Here are a few select benchmarks to pinpoint some of its performance aspects:- 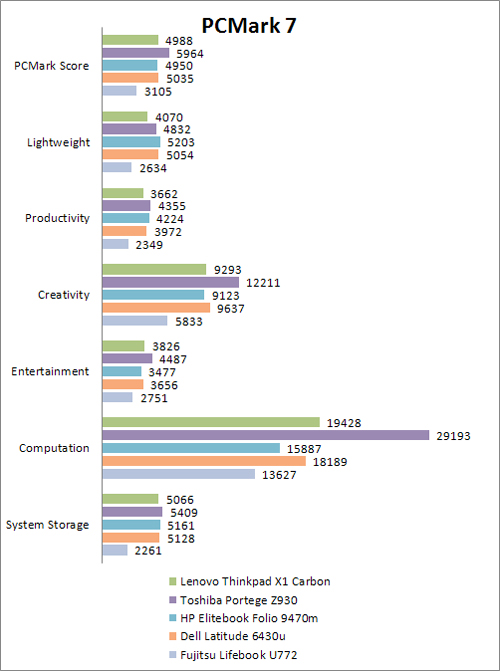