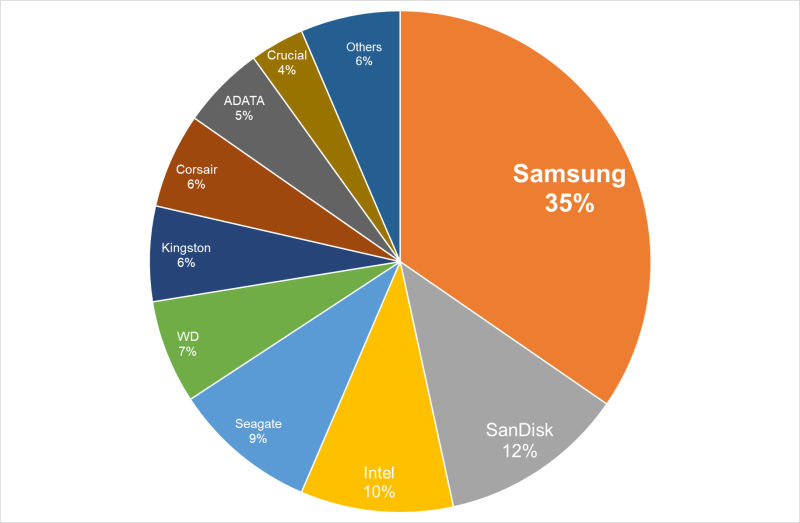 This year’s Readers’ Choice results see Samsung gaining even more mind share from our readers. A total of 35% of you voted Samsung as the Best SSD Brand, an award they’ve note won seven years in a row. This is an increase from last year’s result of 27%. With prices of SSDs dropping enough for it to become a mainstream storage solution for many, Samsung’s focus towards speed and capacity allowed the company to remain relevant. The 980 Pro was 2020’s speed king, marketed at professionals and gamers, while the 870 QVO brought SSD capacities in line with traditional HDDs, boasting up to 8TB of storage. 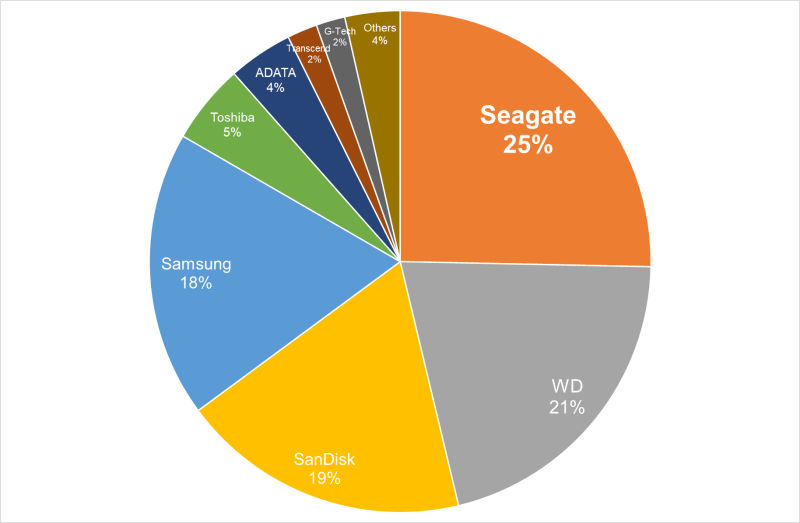 With 25% of the votes, this would be the third consecutive year Seagate has won the award of Best External Storage Brand in the Readers’ Choice category. The brand increased their vote share from last year by 3%. The next three spots go to WD (21%), SanDisk (19%) and Samsung (18%). These top four positions remain the same as last year, with everyone gaining a little more vote share, eating into the positions of the rest of the market. We believe Seagate’s continued leadership here is due to its wide range of products, and constant innovation that helps improve performance as well as lower costs. that cater to more than just portable personal storage. While you can still have an affordable and efficient pocket drive in the likes of the Seagate Backup Plus series, they also have niche offerings for dedicated use cases such as the Firecuda Gaming Dock, which acts as a multi-functional Thunderbolt 3 hub with a 4TB storage that’s further expandable via M.2 NVMe. 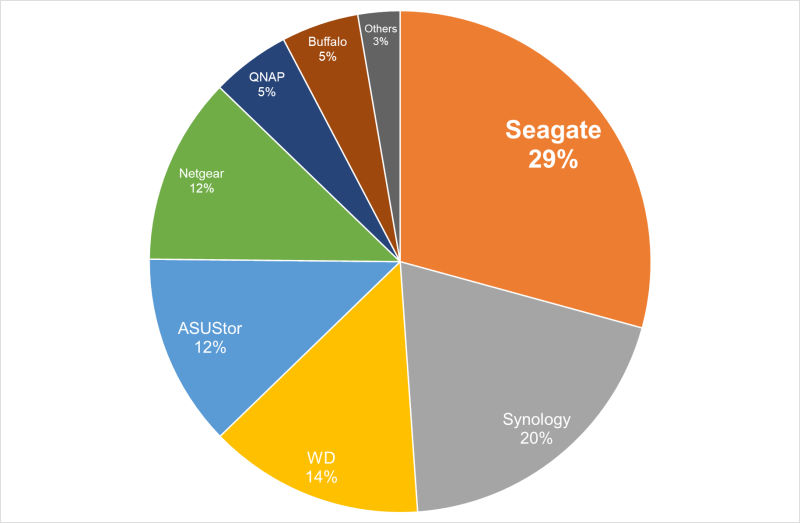 It was a tight race in last year’s tech awards, with Synology winning by a slim margin of 19% of the votes with Seagate closing in at 17% of the votes. This year’s voting results show Seagate pulling ahead by a wider margin of 29% over Synology’s 20% in total vote share to win the Readers’ Choice Best NAS Brand award. Now, these results are pretty interesting when you consider Seagate doesn’t actually sell NAS devices. They only sell the drives used in a NAS under the IronWolf branding. They’re actually a close partner with Synology, and if you visit Seagate’s website, Synology’s NAS devices are featured with Seagate’s IronWolf drives. What we can possibly gather from this is that while Synology still has a comfortable lead (third place WD has 14% of votes) for NAS offerings, having a good, dedicated HDD/SDD product designed for NAS usage may be a more important factor for our readers. 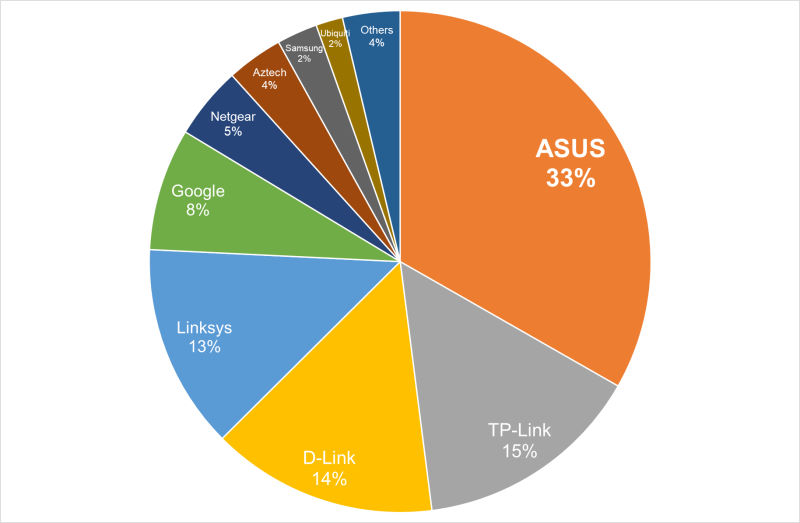 For the 8th year running, you have voted ASUS as the Best Wireless Networking Brand in the Readers’ Choice category with 33% of total votes. ASUS’ popularity is most likely due to their focus on powerful hardware with cutting edge networking features across their Wi-Fi 6 range from the flagship ROG Rapture GT-AX11000 to the RT-AX86U. Not only that, ASUS also had a successful collaboration with GUNDAM in late 2020, which also included GUNDAM editions of the RT-AX82U and RT-AX86U. With everyone stuck at home in 2020, it’s not as important to just have fast wireless speeds, but a robust one too that’s capable of supporting an increasingly large number of simultaneous connected devices, which is why  it’s no surprise that the ZenWiFi AX (XT8) is also our Editor’s Choice winner for Best Wi-Fi 6 Mesh Networking System. In second place, TP-Link (15%) actually edged past networking stalwarts D-Link (14%) and linksys (13%) this year, most likely due to their positioning of affordable Wi-Fi 6 routers such as the Deco X20 mesh system and Archer AX11000 router. 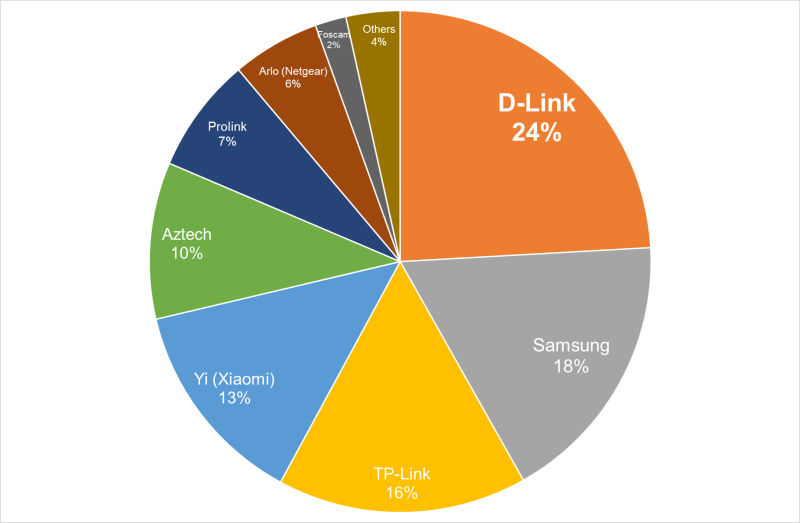 D-Link continues to be a strong presence in the IP camera market. Last year, they garnered 19% of the vote, which has now grown to 24%. This makes D-Link the winner of our Readers’ Choice Best IP Camera Brand Award for five consecutive years. IP cameras have gotten a lot more popular in recent years due to improvements in image quality and connectivity speeds as well as price point and AI assisted alerts to reduce false alarms. Last year’s Wi-Fi IP camera models like the indoor DCS-8526LH and outdoor DCS-8630LH offer Full HD recording, cloud storage and smart assistant integration with Amazon Alexa and Google Assistant. The DCS-8526LH also has improved AI-assisted motion detection to reduce false alerts, while the DCS-8630LH has a 400-lumen spotlight and has intelligent glass break detection. Samsung remains at second place with 18% of votes, while TP-Link overtook Xiaomi’s Yi for third spot at 16%.