Note: This feature was first published on 8 April 2022. 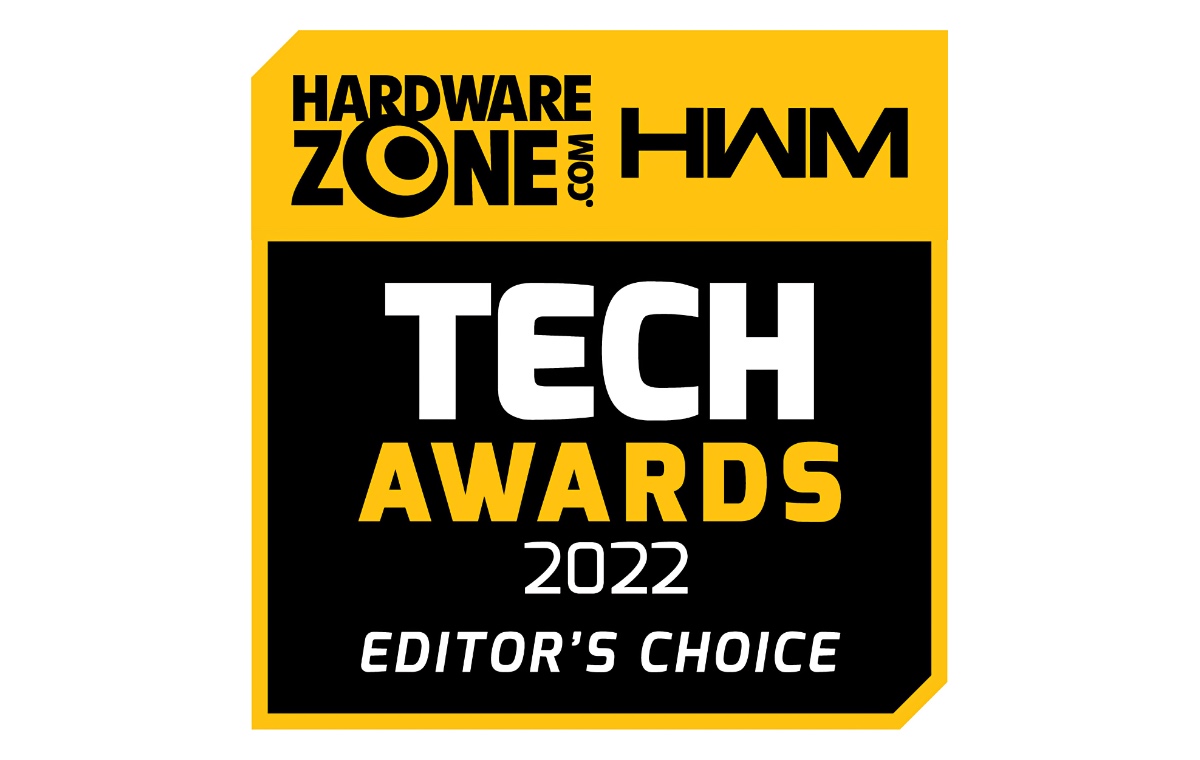 Though the world is steadily reopening and we are spending more time outside now, home is still where the heart is. And for most of us, it is still the place where we spend most of our time. Therefore, it makes sense to invest in the absolute best gadgets that we can afford. Can you imagine coming home after a long day at work to a crummy TV and intermittent Wi-Fi? Yeah, neither can we.

Luckily for you, for Tech Awards 2022, we have gathered and tested all the major devices you'd need to make your home a comfortable living space.

Other segments include the Best devices for the Home (this article), Best of Mobile Gadgets, Best Devices for Office and Work, and Gaming. Not to forget, our Readers' Choice results for the Best Tech Brands. Watch out for our further coverage over the coming weeks.

Read on and find out who the winners are in each category! For this segment, we begin with the centrepiece of all living rooms – TVs.

Over the last year, almost all new TVs launched focused on improving a few core areas. Notably, they are user interface and interaction aspects, bringing more HDMI 2.1-centric features across more TV models, and beefing up the AI processing capabilities to bring forth more tangible improvement in audio-visual experience.

The story of the Best TV is very much similar to what we laid out last year where it has to embody the very best standards across all aspects such as screen to audio performance, how it's designed to evoke a positive emotion, be it physically or via good UI and UX, and support the latest standards like the evolving gaming scene that has been vital to push TV design boundaries.

Noticing how our lead winner over the last few years has been an OLED TV, for this year, we've shifted our focus to consider only the very best OLED TV models that are readily available in retail. Unfortunately, at the top tier, only two brands are leading the field in Singapore where OLED TVs are concerned, so let us tell you which of them stands out as our best pick.

Side note: Though 2022 TV models will soon launch, it's unfortunate that we can't yet qualify 2022 TVs because they are not yet available for our testing at the point of concluding Tech Awards, and many more models will only arrive later in the year. 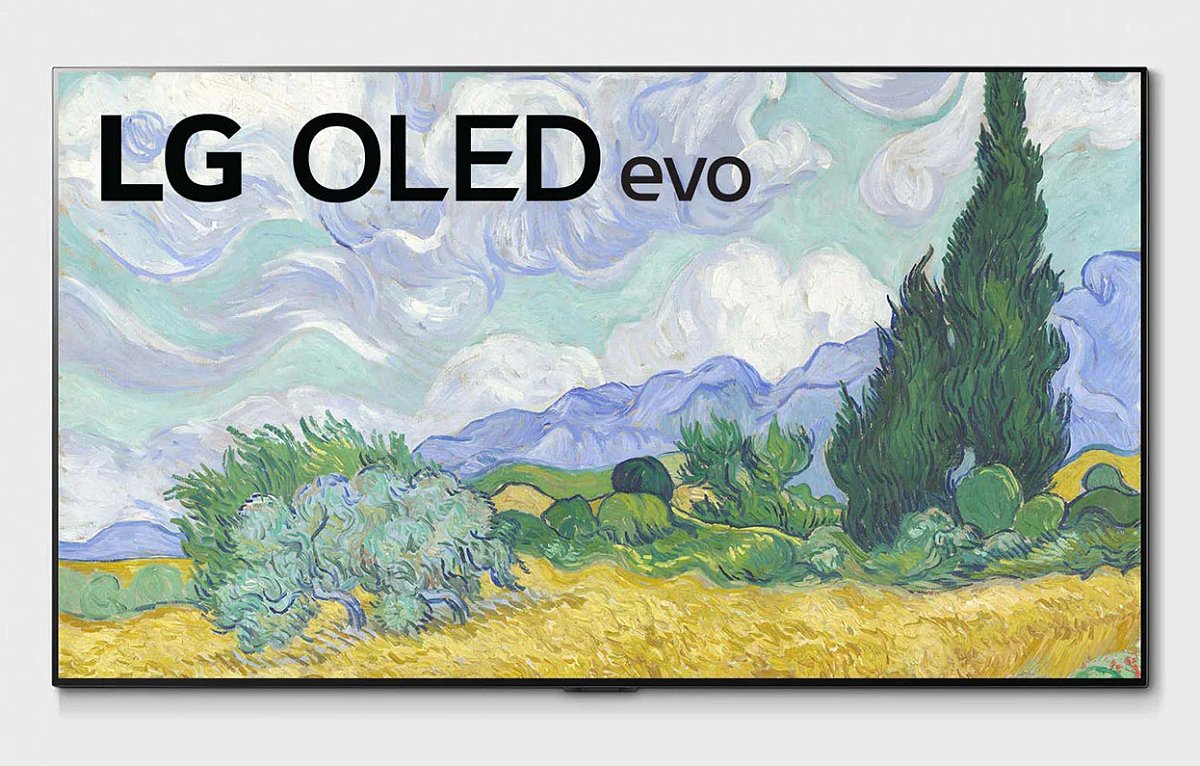 Honestly, testing against the best of the best sometimes involves splitting hairs and nowhere did we feel it was as close as pitting two of the very best TVs money can buy. Both LG and Sony utilise similarly new OLED panels that transmit more light than the usual crop of OLED TVs, with newer processors (LG's Alpha 9 Gen 4 AI processor and Sony's Cognitive Processor XR, respectively) backing the new displays for next-gen processing capabilities. Both LG G1 and Sony A90J put up a brilliant performance show with marvellously deep inky blacks, fantastic contrast, and excellent expression of HDR highlights in Dolby Vision and HDR10 content. As a TV, you want the screen to excel well, and both score highly in this aspect. 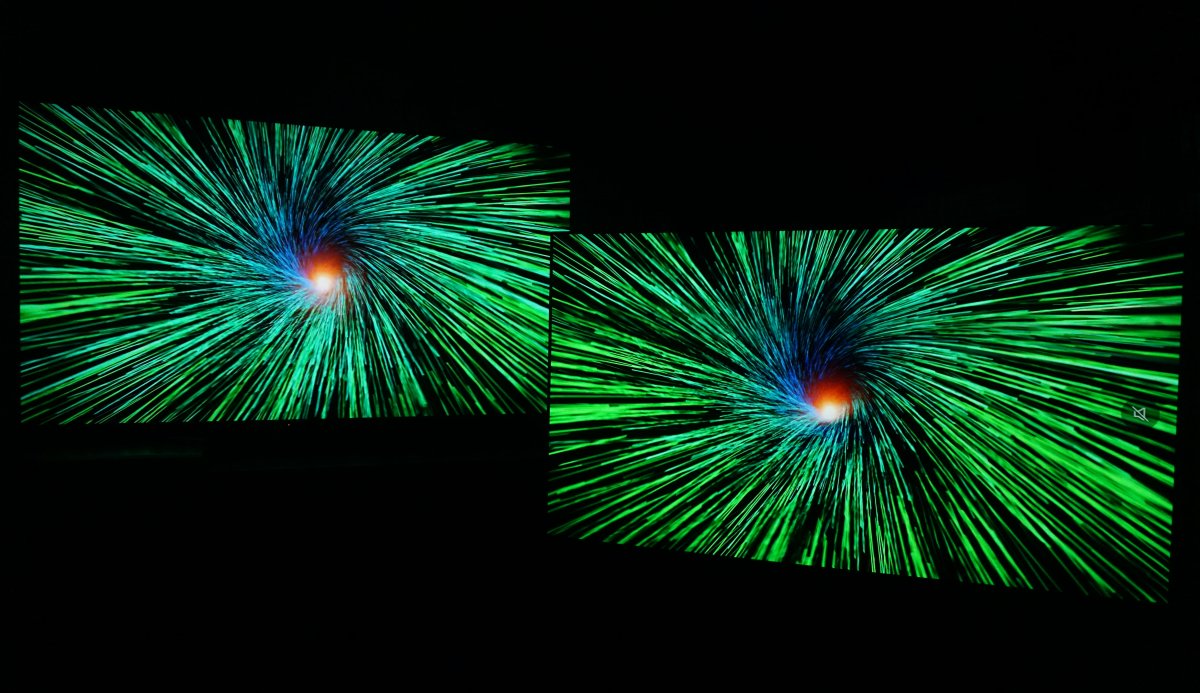 Closer scrutiny would reveal that Sony's Cognitive XR processor's careful processing to consider how human vision perceives and reacts to content seems to have come through with colours and shades that tend to feel a tad more natural. On the other hand, LG is no less competent, but it looks ever slightly more saturated, and as a result, a minor tendency to hide details as your eyes are more focused on the overall punchiness of the scene. Without a side-by-side comparison, you would be pleased with either set. 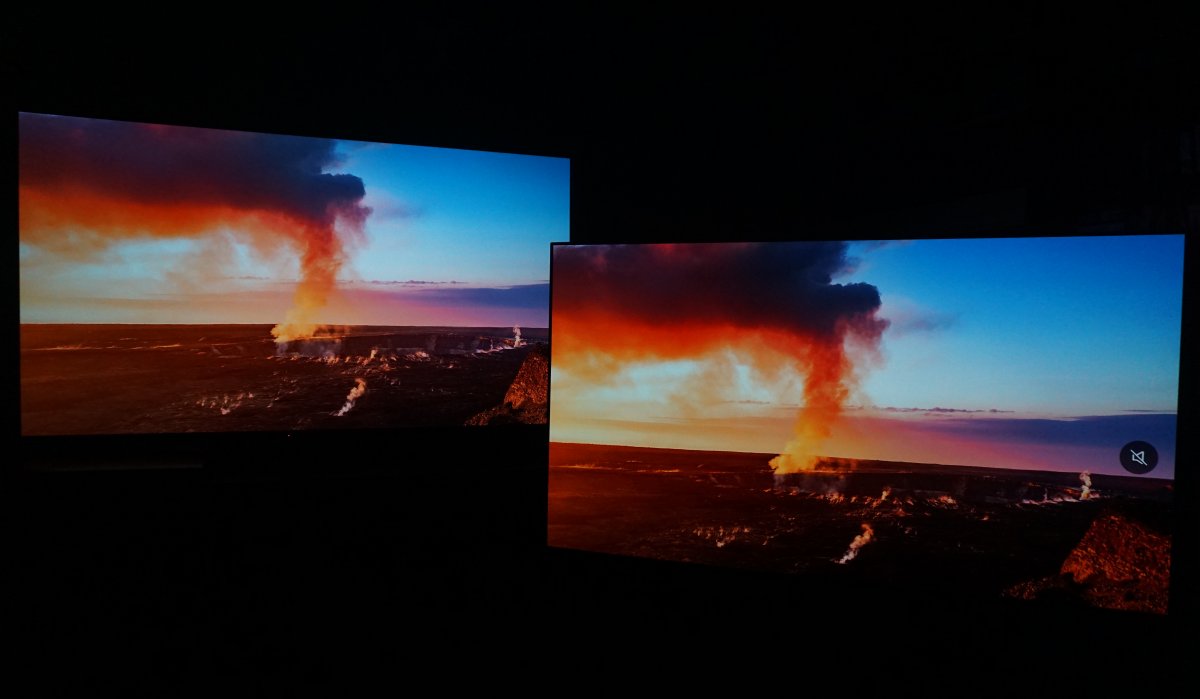 At other times, the only difference discernable is that LG seems to prefer a slightly warmer colour tone than Sony.  Strictly speaking, this is treading the boundaries of personal preferences that are easily tweaked in custom colour options than using it as a basis for choosing one screen over another. Plus, these minute differences are easily tweakable in the respective TV's colour control options to your preference. Both are stellar screens in rooms with little to no ambient lighting and is impossible to differentiate them apart without a controlled comparison like in our test lab.

There's very little to differentiate them, and anyone would be equally content with both options. Below, we fired up a 4K Blu-ray title that is Dolby Vision certified. Once again, we noticed LG being rendering the scene a tad more saturated in the reds, while the Sony appeared a tad brighter and more natural. 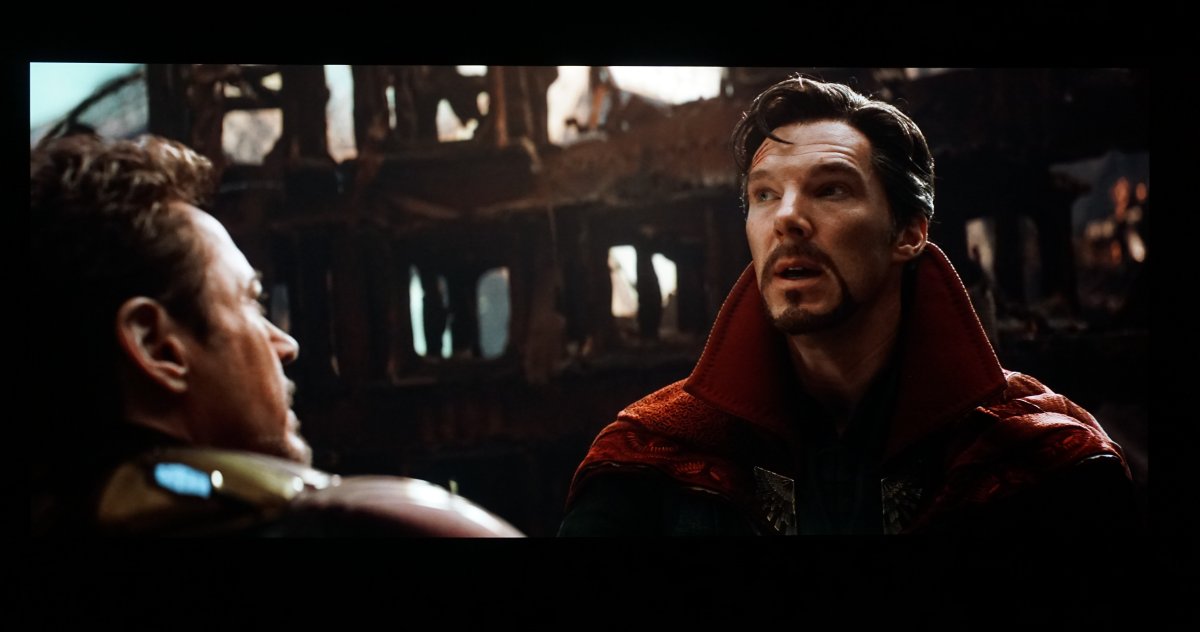 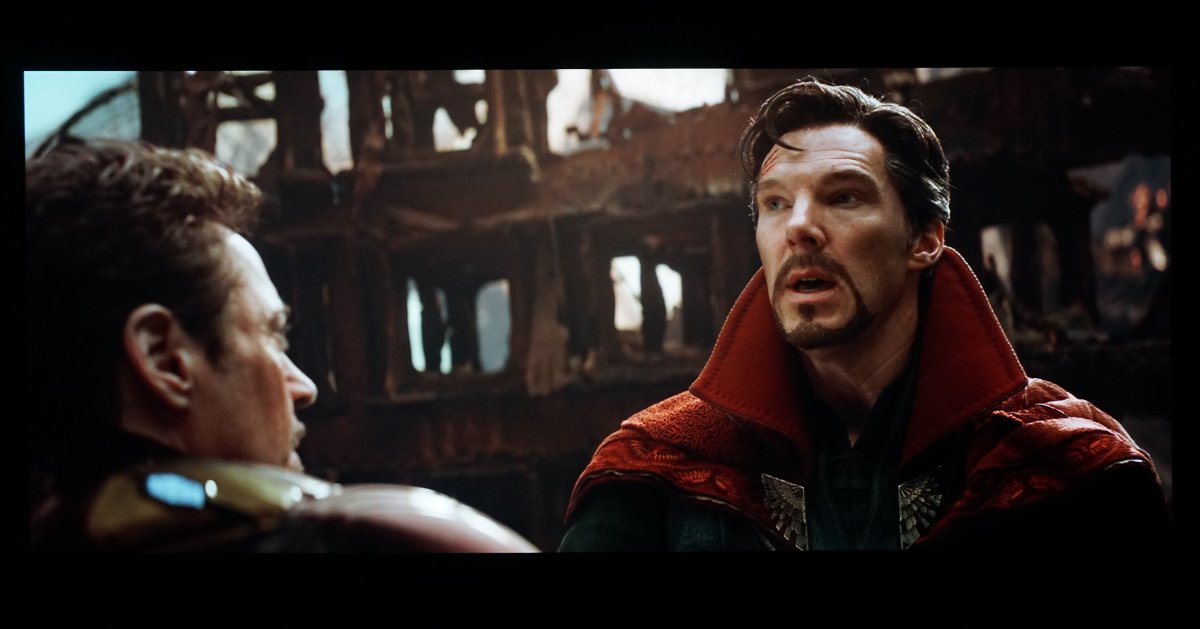 So there we have it, Sony and LG are quite fairly matched visually. Sonically, the Sony A90J Master is hands down the best you'll get to experience from a TV. The Acoustic Surface Audio+ has excellent audio delivery and presence and can even accord you some virtual surround sound through its 60W of audio power delivered via the entire screen to you. You can read more about our in-depth experience with Acoustic Surface Audio+ from an older model. The LG however, sounds ordinary, even with its AI Sound Pro processing.

The bigger question to ask is if the Sony A90J Master is worth two grand more than the LG TV by virtue of its excellent built-in sound system. While value is debatable and having the best integrated experience is always a premium, the simple counter answer is the LG G1 with a stand-alone audio system worth two grand will sound tremendously better than the Sony A90J Master.

Changing gears to gaming, this is a domain that LG is fiercely guarding and is leading the field. The G1 (as well as the C1 and B1 series) is still the only TV that offers quad HDMI 2.1-compliant ports, which means they support 4K gaming at 120Hz with variable refresher rate (VRR) support on all of them. If you have a few gaming consoles/systems and an external audio subsystem, you don't have to pick and choose who gets to use the HDMI 2.1 port for the best gaming experiences on the Xbox Series X, the Playstation 5, and even on your gaming PC connected to the big screen. Sony's top TV only has two such ports, meaning if you do use an external sound system to pipe audio from your streamed shows on Netflix, you're only left with one other HDMI 2.1 port to be shared among your high-end gaming consoles/systems. LG is also the only TV model consistently featured on NVIDIA's G-Sync compatible list, plus it's also the only screen to support Dolby Vision HDR gaming on 4K120 with supported gaming titles, which is a considerable feat. Let's not forget the Game Dashboard where you can dial up features and makes adjustments while you're in-game.

What about from a TV usability perspective? Even though Sony's Google TV has had a makeover, LG's webOS 6 simply trumps the Japanese counterpart. From having a central pool of movie and show recommendations across different video streaming options, to having quick access to your connected smart home appliances and even jumping to a preferred input device, LG's new home screen is a winner. 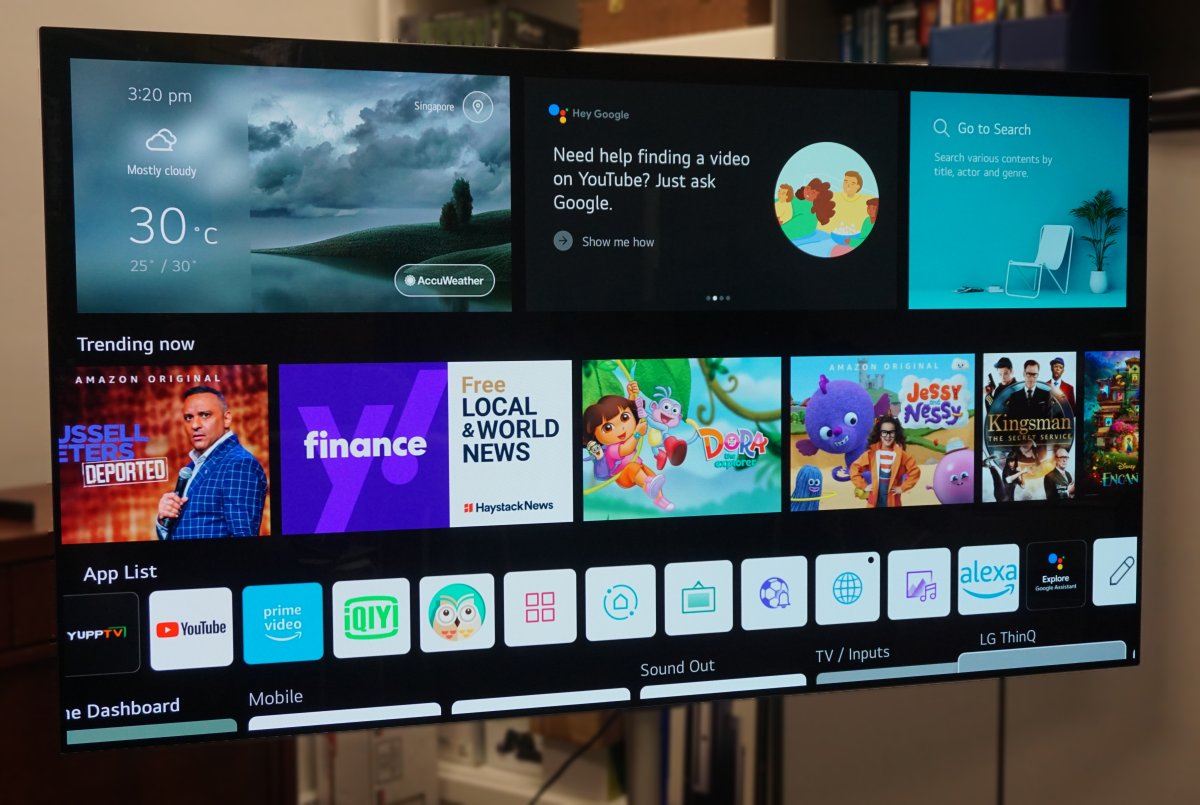 Let's not forget LG's revamped remote that's so friendly to use in conventional mode, or via its magic wand feature. The immediate usability is simply much better than Sony's attempt. While we love Sony's backlit motion-sensor enhanced remote, the stick is too long and unwieldy, while some buttons are harder to discern and engage comfortably. While we're on the topic of ease of use, LG's 2021 TV models are Bluetooth Surround Ready whereby you can throw in just about any Bluetooth speakers you've at hand, pair them with the TV and set them up to the sides or rear of your sitting position to enjoy true surround sound with your TV's main speakers. Now that's a quick and affordable fix for any show, anytime without having to own a multi-channel speaker system. 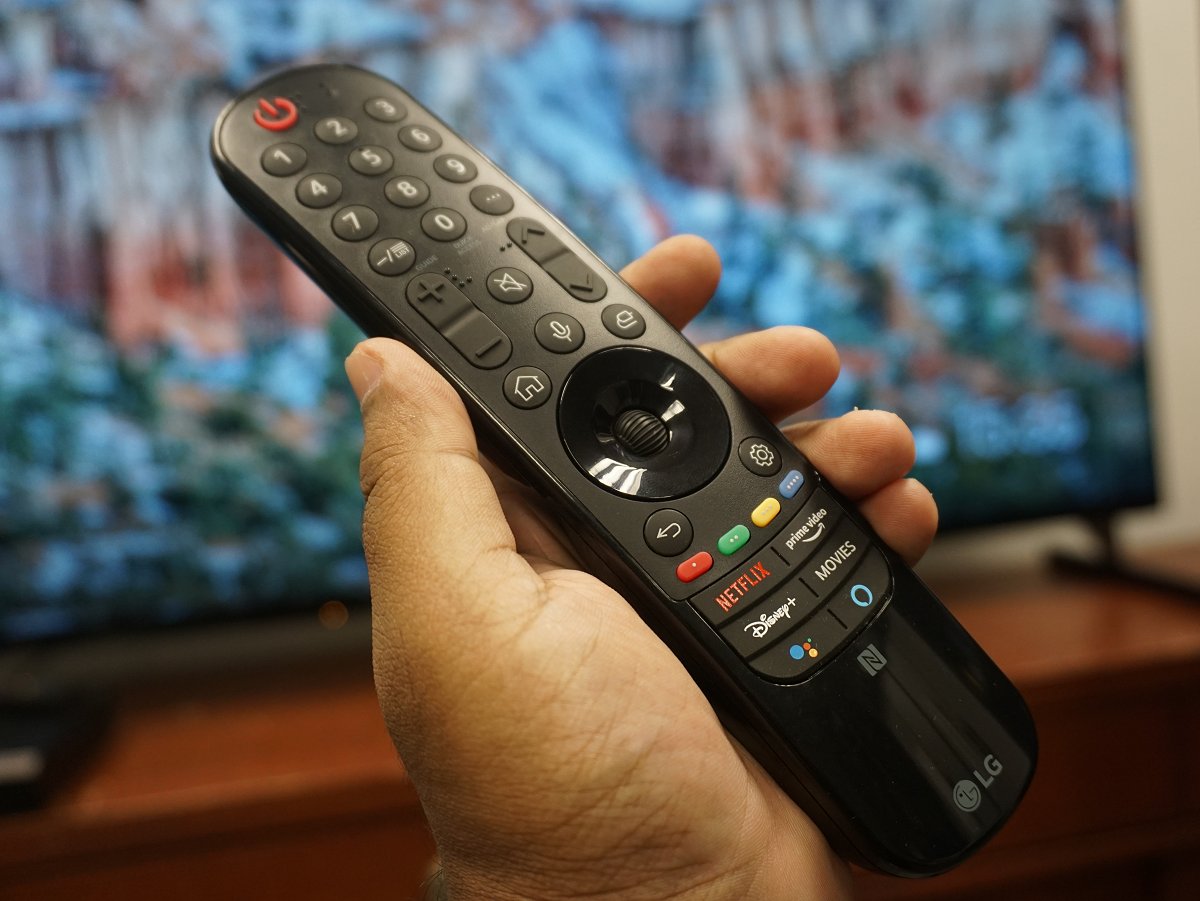 In summary, LG has a lot of things right going for it that make it an easy choice for anyone wanting the best OLED TV model. It's got great performance, not overly expensive, yet has a better feature set appreciated by more people and is a friendlier TV from a UI and UX perspective.

That's not to say we won't recommend the Sony A90J Master Series. It does, after all, have a tad brighter screen and a built-in sound system that's unbeatable by any other TV. In fact, its sonic performance is so good, Sony has speaker posts integrated at its back to allow you to integrate the TV as part of your home theatre's centre-channel speaker. This does mean the Sony A90J Master Series is really only for discerning folks who've deep pockets and appreciate either not having to buy a standalone soundbar or folks who already have a good sound system. Ironically, Sony seems to be catering to those with niche demands, and it accomplishes its mission.

In the end, LG's G1 Gallery OLED is an easier choice most can agree upon and has a winning combo to get our nod as the overall Best OLED TV recommendation. You can also get most of what the G1 series offers in even the C1 and B1 series, further making the LG OLED lineup an appealing option.