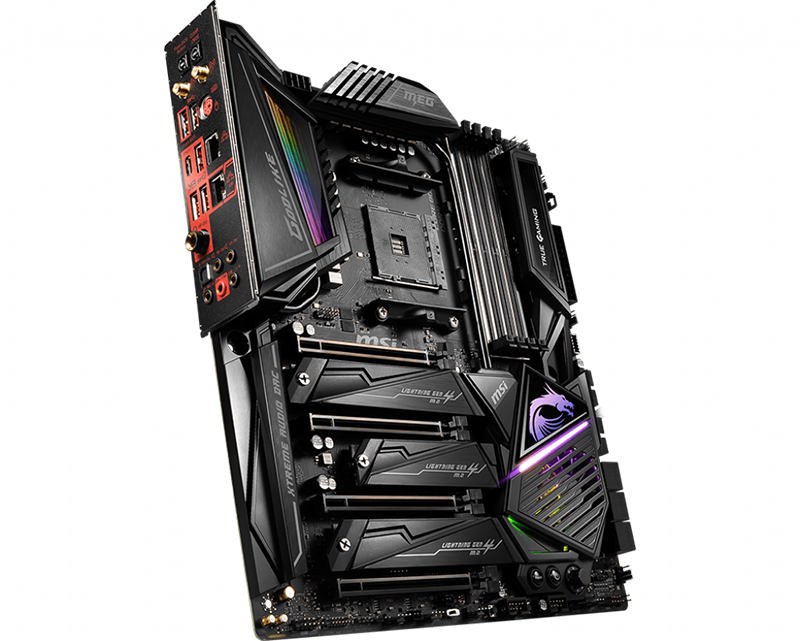 Just like the other motherboard manufacturers, MSI is stepping up its game in terms of its X570 offerings. It's shooting higher than ever before, and the MEG X570 Godlike marks the first time that it's bringing its flagship Godlike model to an AMD Ryzen chipset.

In addition, it is equipped with dual 8-pin CPU power connectors and an eight-layer PCB, the latter of which helps accommodate the additional trace paths required to sustain the greater amount of power. According to MSI, it's actually using a server-grade PCB here in order to ensure PCIe 4.0 performance and better stability. 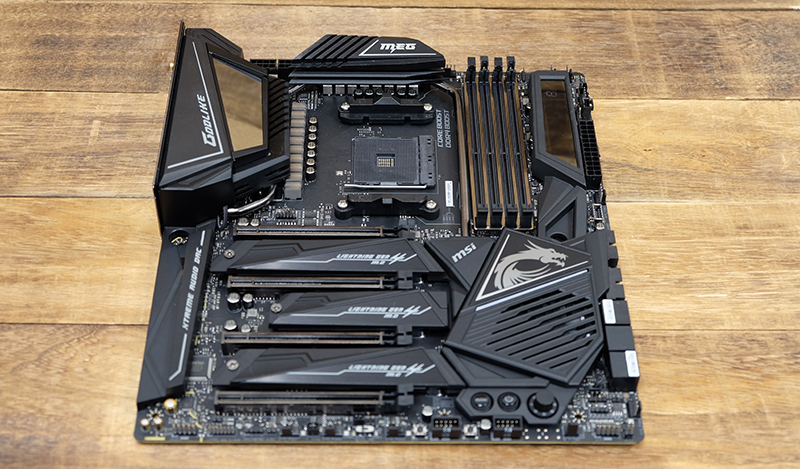 The X570 chipset is also expected to generate more heat and pull more power than its predecessor, to the tune of 11W compared to roughly 6W on X470. That's a big part of why you're suddenly seeing fans integrated into the chipset heat sinks of so many high-end X570 motherboards, and the MEG X570 Godlike is no different. Its integrated double ball-bearing fan works to keep to chipset cool, and it is also linked to the VRM heat sink via a single heat pipe to increase the surface area available for heat dissipation.

And speaking of cooling, one potentially useful feature is MSI's Zero Frozr technology, which you may recognize from the company's graphics cards. This is a smart tuning system that can automatically adjust fan speeds based on the chipset temperature, but it can also completely turn down the fans when system loads are low.

Another nifty feature is the Dynamic Dashboard OLED display on the right. This can display system information like CPU temperature or be set to show off your own custom GIFs. The special mirror reflection effect you get on the I/O shroud is also pretty fantastic, and it's sure to be a nice fixture in your case.

The board costs a whopping S$1,269, and MSI has just about thrown the kitchen sink at it. However, there's still one glaring omission, and that's the metal backplate, or lack thereof. It's not that important a feature, but I'd expect a board that costs this much to include it anyway, since the ASRock X570 Taichi, which costs less than half its price, also has one. 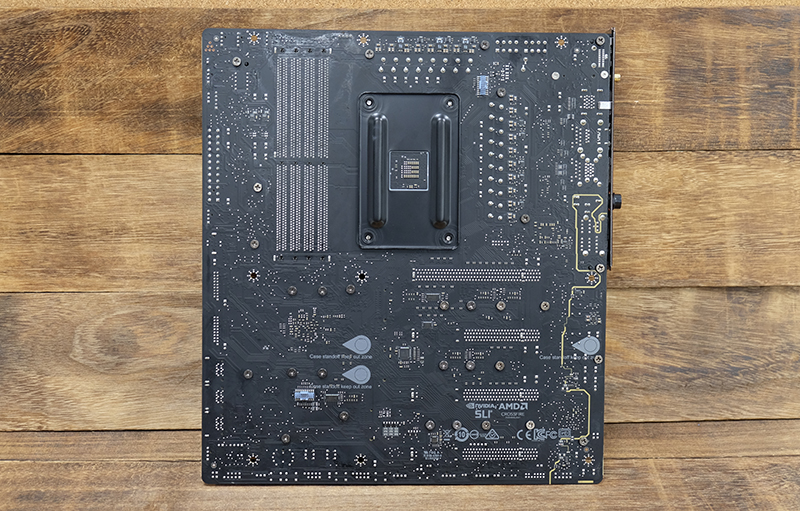 It feels like a big focus of the Godlike's design is on expandability. It features four PCIe 4.0 x16 slots, three M.2 sockets, and six SATA 6Gbps. On top of that, it also ships with a couple of expansion cards, including a 10G Super LAN card for ultra-fast connections if your network supports it and an M.2 Xpander-Z Gen 4 card that can hold two more M.2 PCIe 4.0 drives. The latter even has its own heat sink and fan to keep your drives running cool. Each of the motherboard's built-in M.2 sockets have MSI's Shield Frozr heat sinks as well to reduce thermal throttling. 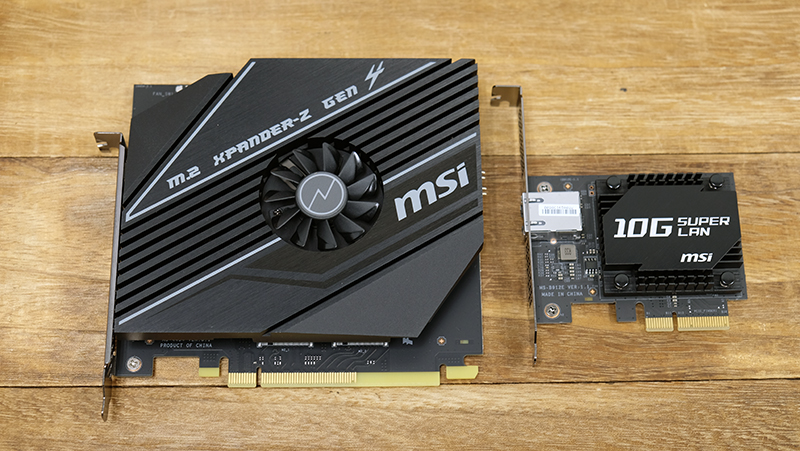 Three of the PCIe 4.0 x16 slots draw lanes from the CPU, while the last one takes lanes from the chipset and only runs in x4 mode. Both the PCIe and DIMM slots also come with metal reinforcements to make them more robust. 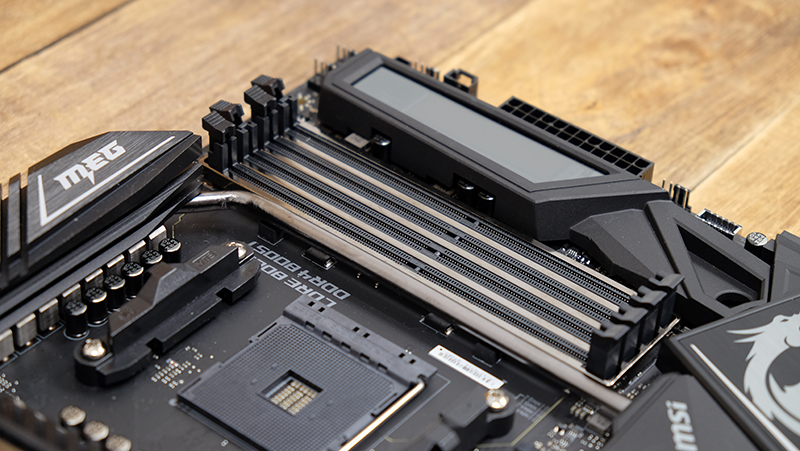 On the storage front, only four of the six SATA 6Gbps are provided directly by the chipset. The remaining two are actually provided for by an ASMedia ASM1061 chip. The three M.2 sockets come from the chipset, where two of them support both PCIe and SATA drivers and the third supports just PCIe devices. 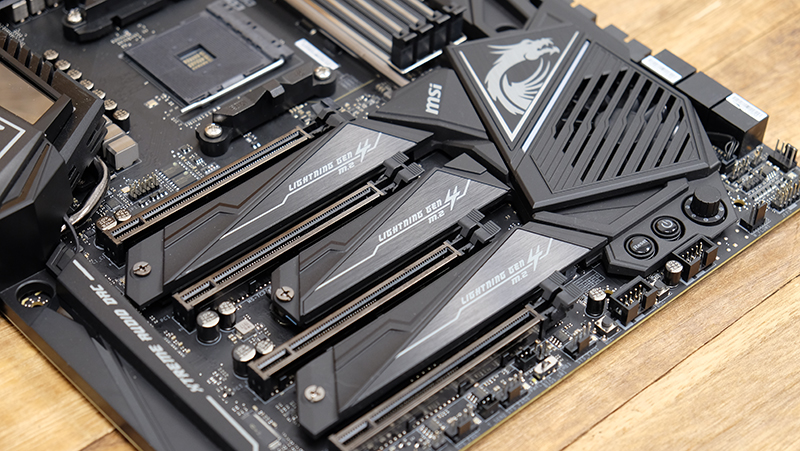 To further add value, MSI has also included some sleeved black and red SATA cables to go with the board. 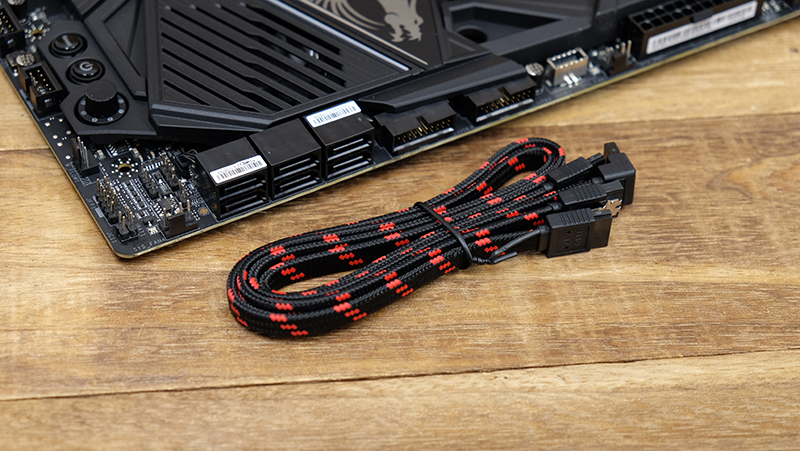 The rear I/O panel also features an integrated I/O shield for easier installation, and you'll find one USB 3.2 (Gen 2) Type-C, three USB 3.2 (Gen 2) Type-A, two USB 3.2 (Gen 1) Type-A, and a PS/2 connector for legacy devices. There are also two RJ-45 jacks, both powered by Killer LAN controllers. One of them supports speeds up to 2.5Gbps in case your internet plan supports that. There's also a 6.3mm headphone jack that will take higher end headphones without the need of an adapter.

Compared to the other boards though, the selection of USB ports feels a little sparse, and I definitely think a board that costs this much could use additional USB 3.2 (Gen 2) connectors.

Like the other boards, there are also buttons for updating the BIOS and clearing CMOS at the back. 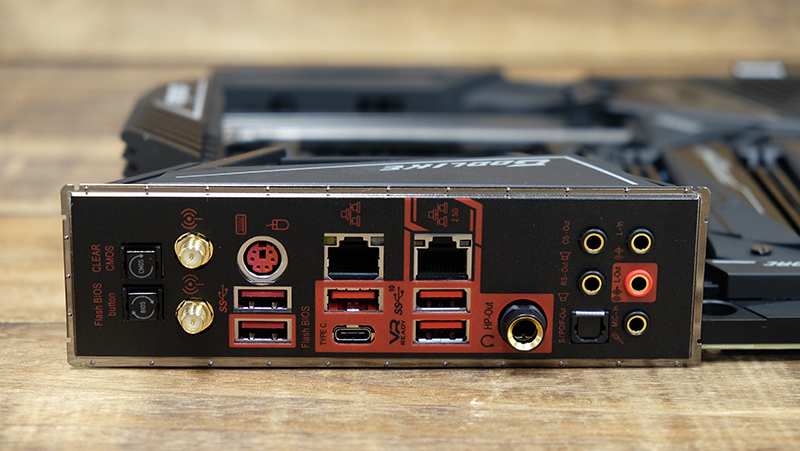 The latest Wi-Fi 6 standard is supported as well, but MSI has opted for the Killer Wi-Fi 6 AX1650 module instead of the equivalent Intel solution. 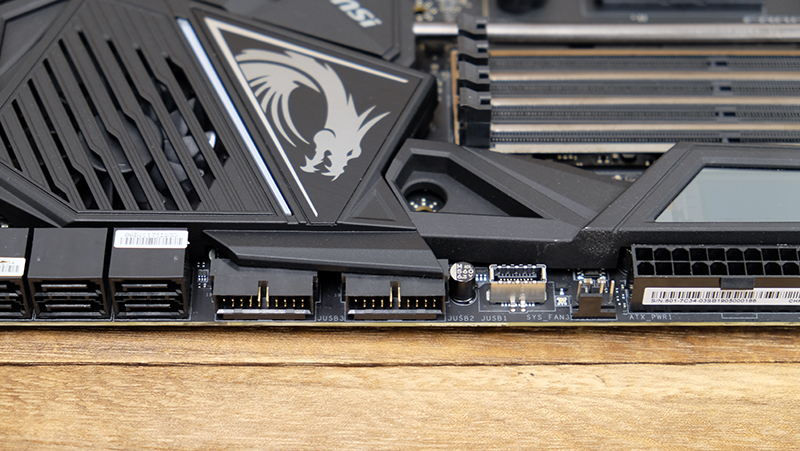 There is no shortage of fan headers available, and the Godlike comes with separate headers for the CPU fan and water pump  and seven other headers for chassis fans. There's also a 3-pin header for measuring water flow, in case you want to set up a custom loop. There is no support for fans that pull more than 1A though, so don't go installing a high amperage fan on one of the onboard headers.

If you want to add third-party LED strips to your case, you can hook them up to the 4-pin RGB LED connector, two 3-pin addressable LED connectors, or the 3-pin Corsair LED header. As the name suggests, the latter will only work with Corsair products, which you can then control using MSI's Mystic Light software.

This JCORSAIR1 connector is actually more useful than it seems. After all, Corsair does make some popular accessories, including excellent RGB fans. However, fans like the LL120 RGB can be quite a pain to manage, since you need to connect them to a fan hub and then to the Corsair Lighting Node Pro to control the lighting effects. The JCORSAIR1 header eliminates the need for the Lightning Node Pro, and you can connect the Corsair fan hub directly to the motherboard and control the effects using Mystic Light. 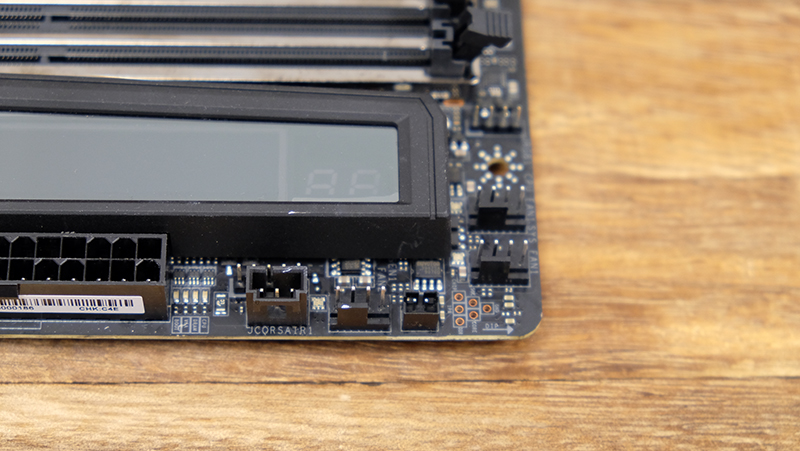 Finally, the board comes with power and reset buttons at the bottom, in addition to the Game Boost knob and BCLK adjustment buttons. Each stage on the Game Boost knob corresponds to a preset frequency and voltage, and it can be thought of as a quick way to overclock your processor without fiddling with the BIOS. However, it's by no means a guarantee of achieving any specific overclock, and I expect that enthusiasts will prefer to get their hands dirty with manual adjustments anyway. You can also quite easily adjust the BCLK in the BIOS itself, so the hardware buttons don't solve a super pressing need either. 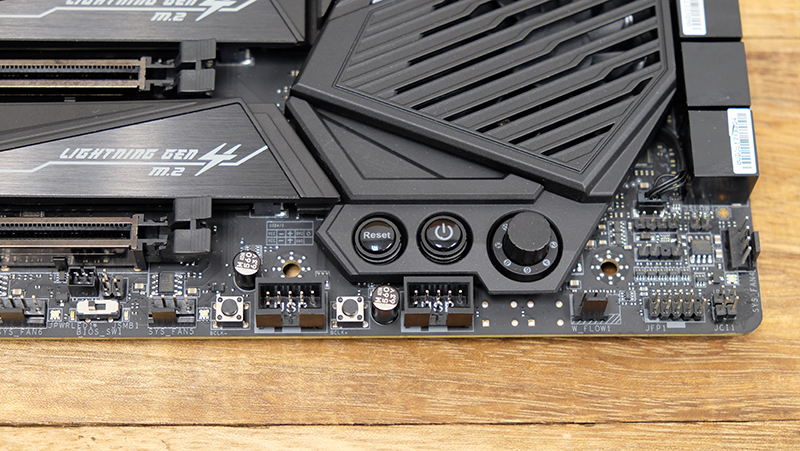 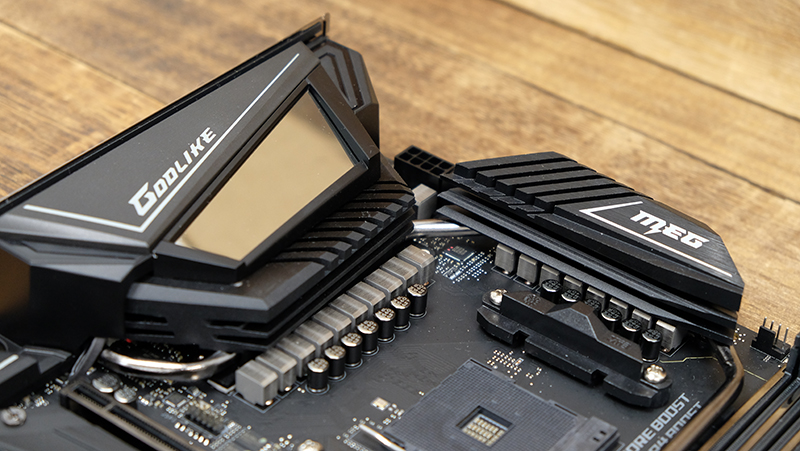 MSI has gone with a 14+4 design, but it still doesn't quite match Gigabyte's implementation. The PWM controller is an IR35201 that supports up to eight phases. There are in fact eight true phases, relying on seven Infineon IR3599 phase doublers for the CPU VCore. It also features 14 Infineon Smart Power Stage TDA21472 MOSFETs that are rated for up to 70A and 14 titanium chokes. 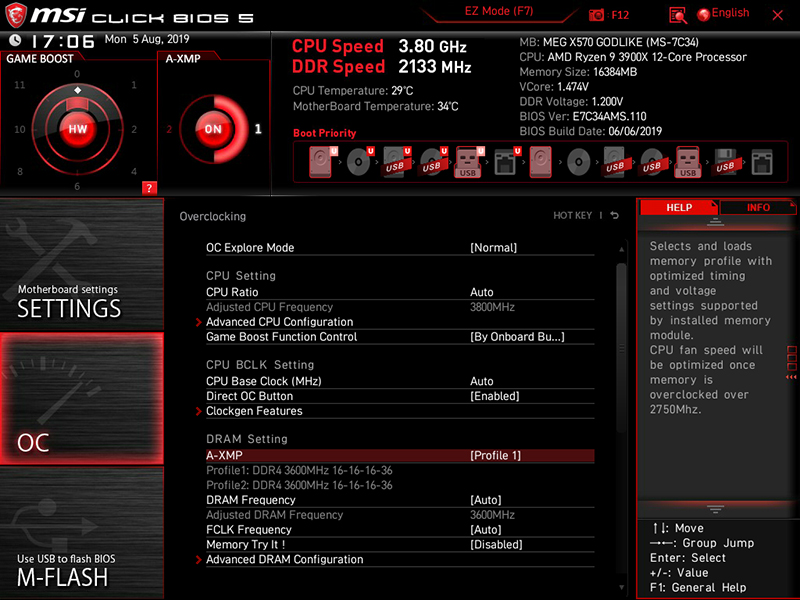 MSI has placed a greater focus on the visual arrangement of its menu items, and the Advanced Mode sees key settings grouped into large tiles. You can see Settings, OC, and M-Flash in the image above, but deselecting OC will also reveal tiles for OC Profile, Hardware Monitor, and Board Explorer on the right. The latter doesn't really do anything, but it's a quick way to view information on the motherboard without having to refer to the manual.