Microsoft Surface with Windows RT - A Window of Opportunity?

*Update 1 - The review was first published on 13th February 2013, but we've now updated the conclusion to include local price points and related notes. If you've read our review previously, jump straight to the conclusion page or find out more about the local updates/support matters in our news piece.

Although Microsoft is primarily involved in the software business, the company has had an active hardware division ever since 1982 that focused on input devices for its software ecosystem. The first of them is the Microsoft Mouse in 1983. However, it wasn't until the Xbox arrived in 2001 that Microsoft was involved in the hardware business in a big way that it affected an ecosystem - in effect, the video games industry. The company is also a dominant force in computing and mobile devices, though it preferred to work with the extensive support of vendors to build the necessary hardware devices while Microsoft supplied the software and necessary applications/games.

However the playing field has forever changed when Microsoft announced in 18 June 2012 that it would be building its own PC computing hardware via two tablets under the brand name Surface, thus catching some of its manufacturing partners off-guard. To its partners, Microsoft's decision will have a negative impact on the "ecosystem" and increase unnecessary competition.

The Microsoft Surface tablets come in two variants: Surface Windows 8 Pro is the latest version that's Intel-powered with Windows 8 Pro, while the Surface Windows RT is ARM-powered with Windows RT operating system. For starters, the single most important difference between the two operating systems is that Windows RT can only run on devices powered by ARM processors, while Windows 8 Pro runs only on x86 devices. While both systems sport the "Modern UI" (previously known as Metro) and are able to run the modern Windows apps obtained from the Windows Store, Windows 8 Pro devices can also revert to the traditional desktop interface to run older applications used in previous Windows versions. Windows RT however, can only execute the modern apps obtained from the online Windows Store (more differences between Windows 8 variants are compared here)

In terms of availability, the Surface with Windows RT has been available for purchase since 26th October 2012 at all Microsoft Store locations in the U.S and Canada. Consumers can also get the tablets online in Australia, Canada, China, France, Germany, Hong Kong, the U.K, and the U.S. The Surface with Windows 8 Pro currently retails only in the U.S since 9th February.

How does a company make its products stand out from the rest? Well, the hardware plays a critical role in shaping consumers' first impressions of the product and Microsoft certainly spent a great deal of effort to ensure its Surface tablets exude excellent build quality. The Surface tablet uses a magnesium alloy called VaporMg, which Microsoft touts it being three time lighter than aluminum. Despite that, the Surface at 680 grams is oddly heavier than most of its counterparts. In its defense, we have to point out that the Microsoft Surface comes with the largest screen size at 10.6 inches across for a tablet, which is bordering that of hybrid/convertible notebooks. Furthermore, the screen is protected by a layer of Gorilla Glass 2, which while adding some heft, makes the screen really tough and durable. With the kind of materials used, the Microsoft Surface is one of the hardier tablets around. Below is a quick comparison with the tablets from within its camp and competing platforms:-

Nonetheless, the Surface is a beautiful piece of hardware that stands shoulder to shoulder with the Apple iPad and ASUS Transformer Pad Prime, two of the best tablets around. Despite the flood of Android tablets in the past two years, we dare say most of the tablets are inferior in terms of design, feel and handling. Microsoft also incorporates anti-fingerprint coating on the Surface, which keeps fingerprints at bay most of the time.

While we've seen vendors experiment with sliding mechanisms on the ASUS Eee Pad Slider and Sony Vaio Duo 11 notebook, the concept of an integrated kickstand hasn't been implemented before on any tablet. For that, we feel Microsoft's design and engineering teams deserve some credit for coming up with something functional, seamless and appreciable. For those interested, you can read up more to find out some of the design and thought processes that were put in place in creating the Surface tablet, including the creation of hundreds of custom parts such as the kickstand mechanism.

Popping out the kickstand is simple via the groove on the right profile(when the tablet is on its back) or via the two tabs on each side of the tablet. Although the kickstand is thin, it seems sturdy enough to withstand daily usage conditions.

The front of the Surface with Windows RT has a 10.6-inch display (1366 x 768 pixels resolution) on the front, with a 1-megapixel front-facing camera at the top center and a touch-sensitive Windows home button at the bottom center. With just one button for navigation, how do one go about using the Windows interface on the Surface? Well, we detail more in the next section as we touch upon Windows RT OS, navigation and app matters.

Judging by the location of the front facing camera and Start button, it's obvious that the Surface tablet is designed for landscape usage. Given its size and weight, portrait usage isn't ideal. Thus if you intend to read a lot eBooks, the Surface isn't an ideal one-handed tablet for this purpose. This shouldn't be too much of a concern since most Android tablets are designed for landscape use as well. However, compared to the Apple iPad whose size lends it well for both portrait and landscape usage, the Surface is at a slight disadvantage.

The Surface has two important keyboard accessories, the Touch Cover and Type Cover. The Touch Cover is a dual-purpose pressure-sensitive keyboard and tablet cover that is spill-resistant and comes in five different colors (black, white, cyan, magenta, red). The Type Cover, on the other hand, is one of the slimmest mechanical keyboards we've come across. It's also rather light at less than 250 grams. 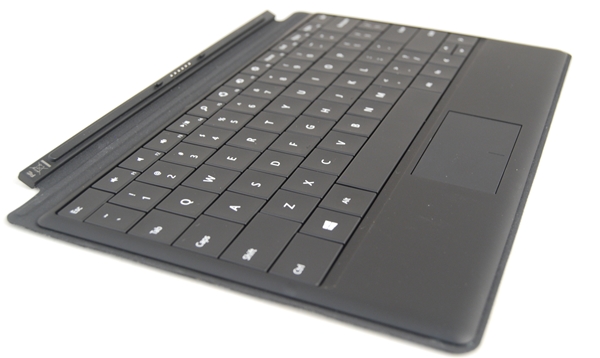 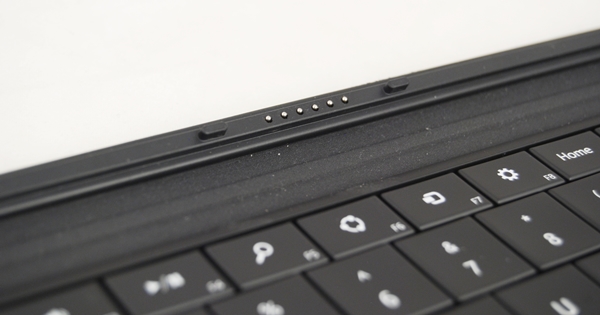 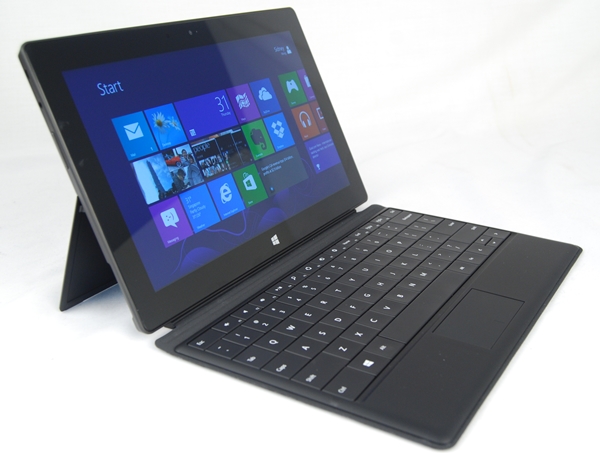 The concept of a keyboard dock accessory is not new as ASUS is famously known for introducing it in 2011 with the Eee Pad Transformer. Since then, the Taiwanese company has followed up with several tablet devices such as the Transformer Pad Prime, Transformer Pad TF300 and Transformer Pad Infinity TF700. Lenovo also equips its Android-powered ThinkPad Tablet with the optional Keyboard Folio Case. 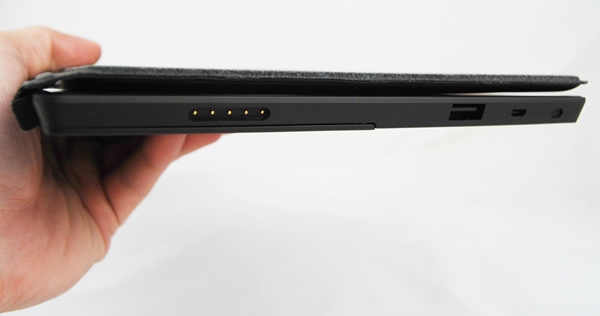 The Type Cover not only scores points in the design department, it also won us over with its functionality. It has a full row of function keys and Windows shortcut keys, which mimics the typing experience on a traditional laptop or desktop keyboard. Hence, we had no problems typing on the Type Cover as the keys provide excellent tactile feedback. Left and right clicks on the trackpad also felt natural. On the bottom side of the Type Cover is a velvet-like material which feels good. However, we have concerns over the material picking up dust and dirt over time.

Overall, the Type Cover is as good, if not better than the bulky Keyboard Folio Case of the Lenovo ThinkPad Tablet. If you are looking forward to get some serious work done on the Surface, the US$129.99 Type Cover will not disappoint and we highly recommend it. On the other hand, do give the US$119 Touch Cover a miss due to its poor typing experience and issues of its durability that have been reported to-date. The Touch Cover's only advantage is its ultra thin 3.25mm profile and light weight, but given that the keyboard cannot be relied upon, you could have gotten a tablet cover that's at a fraction of the cost.

Note that both covers do not have an integrated battery to boost battery life as it did for the ASUS Eee Pad Transformer series. However, that shouldn't matter much as you'll soon see in our performance section. That's not all as both these Surface accessories have an integrated circuit at its folding seam that can either shut down the screen to save power (when the cover is folded over the screen) or power up the screen for immediate interaction without reaching out to fiddle with the power button. Clever indeed.

Write a Review
Compare This | Specifications
Great design and handling
Good overall performance
One of the best optional portable keyboard add-on units
Hefty
Slight learning curve for Windows UI
Limited apps on Windows Store
Our articles may contain affiliate links. If you buy through these links, we may earn a small commission.
Sponsored Links