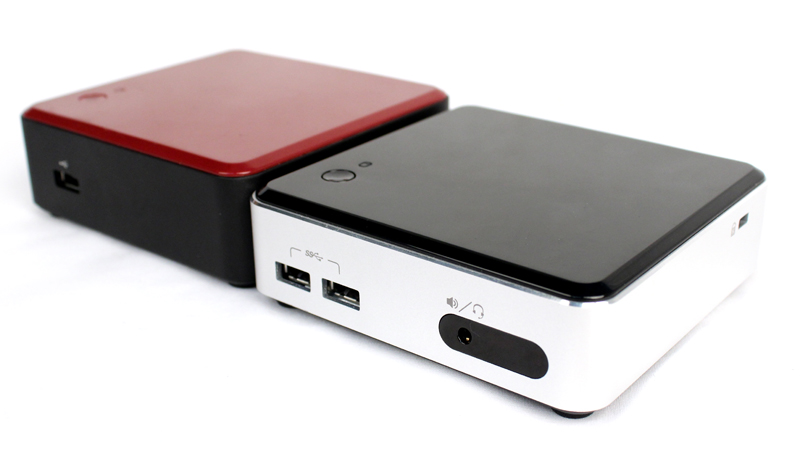 Intel introduced its Next Unit of Computing (NUC) concept in Computex 2012 and released it in retail end of last year. However it wasn't until early this year that Intel managed to release the Core i3-3217U-equipped DC3217BY, a bare bones kit PC in a tiny 4-by-4-inch enclosure to our local market. In our review, we found it to be a pretty decent performer for basic computing workloads, but not the best for more intensive tasks like gaming. Intel has now updated the NUC lineup with the release of two new models armed with 4th generation Intel Haswell processors, Intel HD Graphics 5000 and incredibly, an even smaller form factor. With the right components, could this mini PC be the ideal space saving solution for both work and play?

Two versions of the new Haswell NUC kit are available, one with a more powerful Core i5 processor, and another with a Core i3:

As with the previous NUC kit, the D54250WYB is a bare bones system which only includes the enclosure, a 4-by-4-inch (approximately 11-by-11cm) motherboard with a Core i5-4250U processor soldered to the board (and therefore not upgradable), a heat sink and fan, and an external power brick. You'll need to supply your own memory, storage, wireless connectivity card, and power cord as well as install an OS to get the system running. 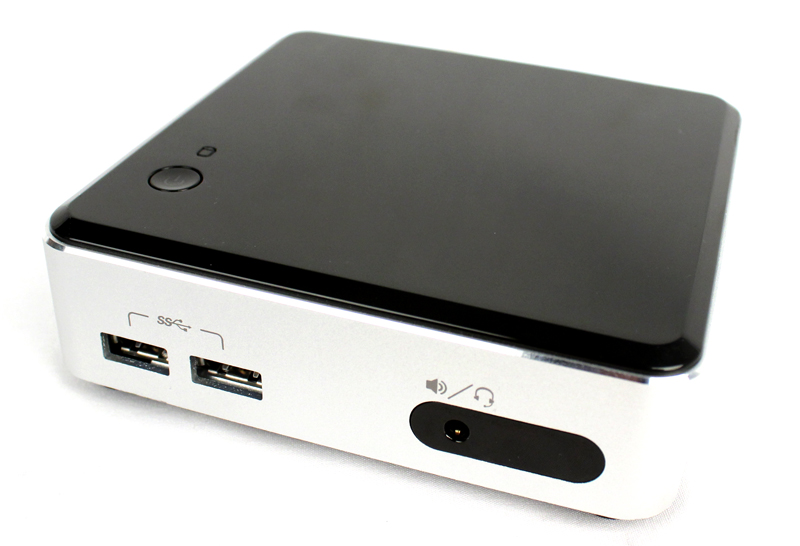 The enclosure remains the same basic 4-by-4 inch form factor, although the new version is actually slightly shorter, measuring just 35mm from bottom to top. Build quality has also been upgraded, with the previously plastic enclosure replaced with a nice aluminum outer shell. The dark red glossy top has also been replaced with a handsome glossy black finish. As with the previous kits, a VESA mount is included so users can attach the system to the back of their display. 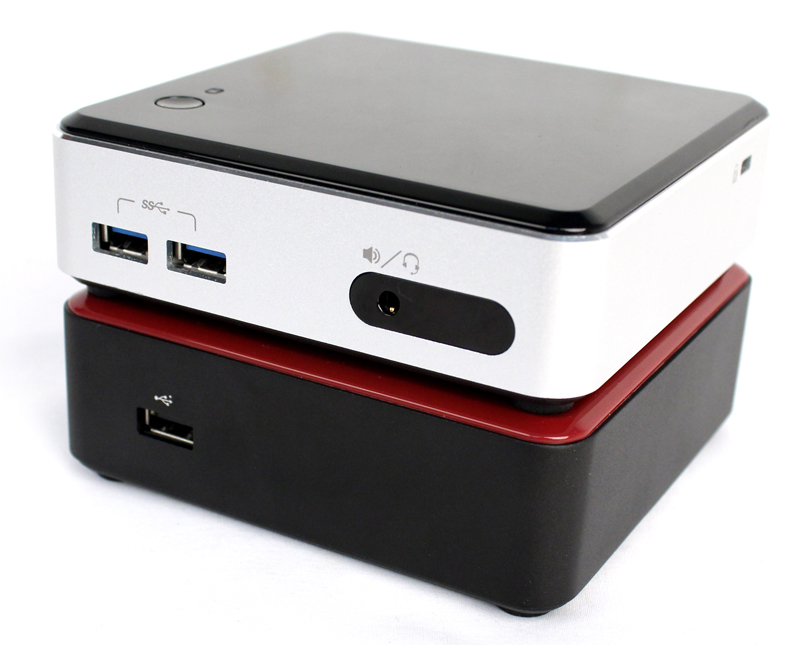 On the front of the system, an extra USB port has been added, and you'll also find a new headphone/microphone jack here. What's more, both the USB ports upfront are the newer version 3.0 variant (the previous kit only had a single USB 2.0 port).

More ports are also crammed into the rear, where you'll find two USB 3.0 ports, an Intel 10/100/1000 Ethernet port, a mini-Display port, mini-HDMI port and the power connector for the external power brick. The mini-HDMI port may prove troublesome for some as you'll likely need an adapter to connect it to your monitor. We would have preferred if it was a standard sized HDMI port.

Opening up the kit requires the same process as before with four screws located at each corner of the bottom panel. Inside, the layout is much the same as the previous kits. One notable new addition to the motherboard is a 6.0Gbps SATA port and the header required to power it, although it should be noted that it does not have the necessary 12V required for 3.5-inch HDDs. However the availability of this port is more for ODMs to integrate Intel's board within their designs rather than of practical use for the NUC Kit. 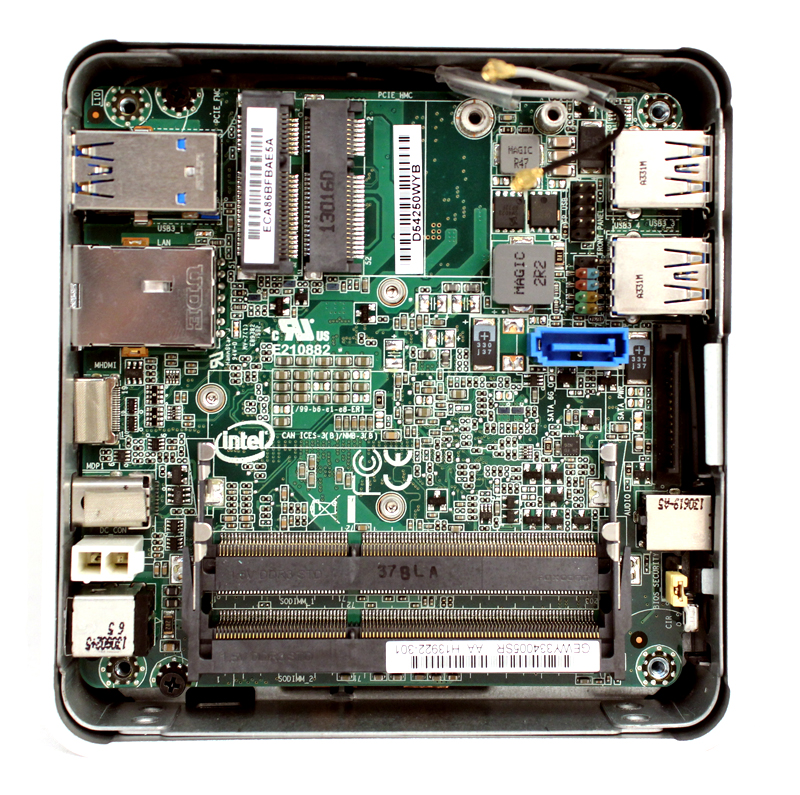 As before, there are two SO-DIMM memory slots, an mSATA slot for your storage, and a Mini-PCIe slot for the wireless card. Helpfully, our review unit came pre-installed with the necessary components as seen installed in the following photo. However, if you purchase the NUC kit in a retail shop, keep in mind to also shop or hunt for these components as they're not as readily available as desktop components. 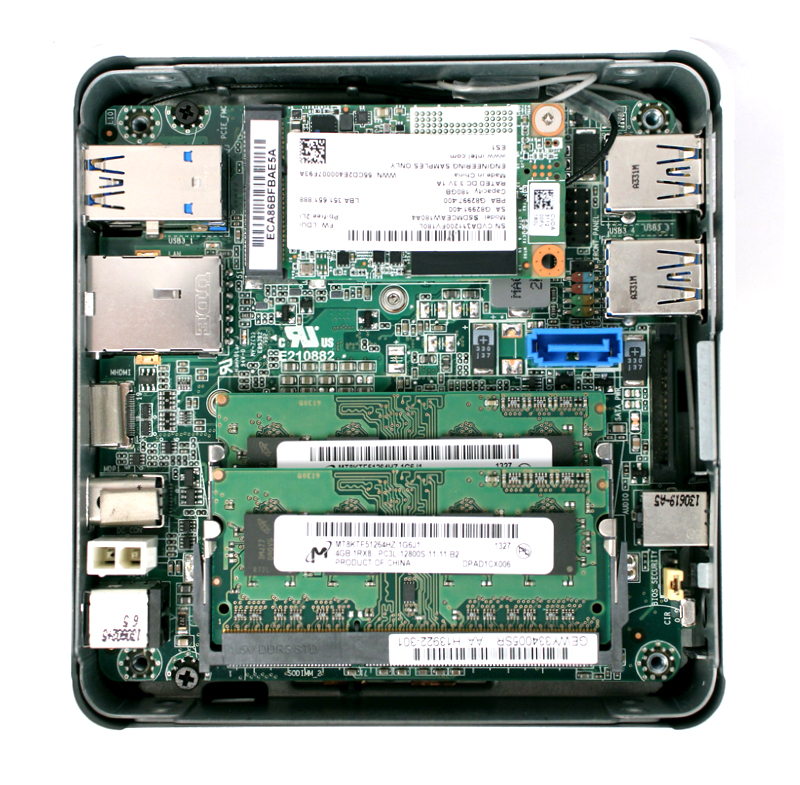 Here's the full specifications of our review unit: