We've gone through what the Huawei P40 Pro+'s chipset (Kirin 990 5G) is in detail over at the Huawei P40 Pro review, so we'll spare you from the ribbon-cutting introduction. The P40 Pro+ has the same chipset, so, phones that compete with the P40 series are also competing with the P40 Pro+. That said, we're definitely interested to know how the Huawei premium device holds up against other premium flagship phone models from this year, such as the Oppo Find X2 Pro and Samsung Galaxy S20 Ultra.

While the chipset is identical to the regular Pro's, the Huawei P40 Pro+ uses different and more intricate cooling technology. Dubbed as 4-in-1 Supercool System, it contains a "highly thermal" conductive graphene film called Graphene 2.0, an ultra-thin vapour chamber, a heat pipe, and some graphite. Huawei claims this setup is their best cooling technique available to the P40 series, and where it shines is the ability to keep the phone cool even when running high-performance apps or benchmarks.

Finally, it's also worth reiterating that the P40 Pro+'s chipset is compatible with 5G networks, with support for both NSA and SA (non-standalone, standalone) modes and a wide range of 5G frequency bands. For 5G, the phone is well-prepared for the eventual proliferation of consumer 5G telco networks in Singapore.

Geekbench CPU is a cross-platform processor benchmark that tests both single-core and multi-core performance with workloads that simulate real-world usage. Geekbench 5 scores are calibrated against a baseline score of 1000, which is the score of an Intel Core i3-8100. As a result, Geekbench 5 scores are not comparable against those of Geekbench 4, whose baseline score is derived from an Intel Core i7-6600 processor. The higher the score, the better. The Geekbench results clearly indicate that the P40 Pro+ doesn't differ significantly from the P40 Pro. It's certainly flagship-tier and on-par with the Samsung Galaxy S20 Ultra, even though it's not as powerful as phones with Qualcomm's flagship chipset, such as the OnePlus 8 series or the Oppo Find X2 Pro. In real-world use, the difference is also indistinguishable between these devices.

JetStream 2 is a combination of a variety of JavaScript and Web Assembly benchmarks, including benchmarks that came before like SunSpider and Octane. It primarily tests for a system's and browser's ability in delivering a good web experience. It runs a total of 64 subtests, each weighted equally, with multiple iterations, and takes the geometric mean to compute the overall score. The higher the score, the better. The Huawei P40 Pro+ leads in this benchmark among all Android-base devices. This is particularly useful, considering that the lack of GMS means that we rely on the default web browser to do most of the heavy lifting.

AnTuTu is an all-in-one benchmark that tests CPU, GPU, memory, and storage. The CPU benchmark evaluates both integer and floating-point performance. The GPU tests assess 2D and 3D performance, the memory test measures available memory bandwidth and latency, and the storage tests gauge the read and write speeds of a device's flash memory. The higher the score, the better. As an all-in-one benchmark, AnTuTu isn't partial to a specific aspect of a phone's performance. Again, it's on-par with the P40 Pro, but that's not ideal considering the improved cooling techniques and the higher sticker price for the P40 Pro+. Perhaps the cooling system is truly designed more for manageable phone use (i.e. consistent performance via reduced overheating), and not for milking every ounce of performance from their flagship chipset. Again, similar to P40 Pro, which offers flagship-tier performance while not quite measuring up to its competitors. However, we'd also imagine that P40 Pro+ owners would not prioritise mobile gaming, given that it's the cameras and photography features that P series is better known for. 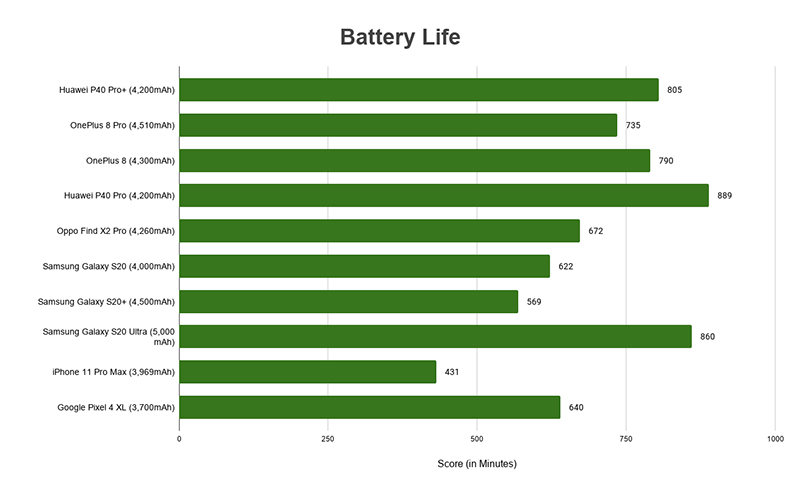 The Huawei P40 Pro+ has the same battery capacity as the regular Pro variant, capping out at 4,200mAh. As mentioned before, the capacity is slightly lower than most alternatives, as you can see from the chart above. The long battery uptime of the Pro+ is yet again a testament to the Kirin 990 5G chipset's ability to balance flagship-tier performance with uptime. It comes in behind the Galaxy S20 Ultra, which has an even larger screen and a whopping 5,000mAh battery pack. Ultimately, it's a combination of efficiency and max capacity that makes a phone long-lasting during the day, and the Huawei P40 Pro+ certainly is battery-efficient, if not one of the most efficient devices on this list (though the P40 Pro is better).

A key difference between the Pro+ and Pro lies in the charging department, with the P40 Pro+ supporting up to 40W wireless Huawei SuperCharge. The regular Pro supports 'only' up to 27W wirelessly. Both models can handle 40W wired charging. If you are a frequent, regular user of wireless charging, it's hard to look away from the 40W wireless option on the Pro+. To get fast-charging wirelessly, it helps if you get ahold of compatible fast-chargers and cables. In our case, they've kindly sent us the SuperCharge Wireless Charger Stand (40W), which is a wireless, dock charger that has a wall-plug that supports 10W, 18W, 36W, 40W, and even 65W (20V, 3.25A) charging.

Using the 40W wireless charger, it takes about 80 minutes to go from 0% to 100%. The charging speed is regulated based on how much battery charge it holds, reaching 20% in just a short 10 minutes and 50% charge in half an hour. Charging is fastest when the phone is 7% and under, and it's at its slowest after the 85% mark. For a full charge, the P40 Pro+ takes roughly the same time as it did to charge OnePlus 8 series phones (wired) fully. It's also slightly longer than Samsung Galaxy S20 Ultra's 60 minutes and Oppo Find X2 Pro's hour-or-less full charging (wired).

For wired charging performance on the P40 Pro+, you can refer to the P40 Pro review, since both devices have an identical wired charging profile and battery capacities. In brief, it took 50 minutes for the regular P40 Pro to reach full charge. On all technical counts, the Huawei P40 Pro+ is an amazing flagship phone. It delivers flagship performance. The faster wireless charging and marble-like ceramic rear make a convincing case for its premium-flagship positioning. Its photography capabilities are certainly a cut above many. If you judge a phone solely on its camera performance, the Huawei P40 Pro+ should rank highly (if not the top few) among all other photography-oriented smartphones.

That said, no phone exists in a vacuum. The flagship smartphone space has always been infamously competitive, with manufacturers and brands competing beyond camera performance, beyond fast-charging, and definitely beyond price points. It doesn't help that the P40 Pro+ also has a starting point behind other Android phones, no thanks to the lack of GMS and workarounds needed to get a similar Android experience. Also, this is coming from someone who's comfortable with sideloading Android apps and finding workarounds - I'm not sure if others might have the same level of patience for smartphones as I do.

In that regard, we do feel a little for the P40 Pro+ given that it's a nice phone, but the market's offerings, my income, and my fraying wallet are less sympathetic. The Huawei P40 Pro+'s price tag at S$1,898 and premium positioning places it in direct competition against the Oppo Find X2 Pro (S$1,699) and the Samsung Galaxy S20 Ultra (S$1,898). To recap, both Samsung and Oppo's equivalent offer displays with higher resolution, deliver better viewing and audio experiences, and are comparatively less finicky at delivering high framerate content. Both Samsung and Oppo premium devices are also more agreeable with mobile gaming (and chalk in better gaming performance as pointed by 3DMark results). Huawei's premium device definitely trumps these alternatives at photography, marginally. However, everything else - from benchmarks, to display, to battery uptime (in the case of going up against Samsung) and the user experience - all fell a little short to the competition. Sure, P40 Pro+ offers expandable memory, but it's through a proprietary card.

Usually, it's quite challenging to decide between one premium flagship from another, but given my findings, I know I would first consider the Find X2 Pro or Galaxy S20 Ultra before the P40 Pro+. Again, it's not because the P40 Pro+ doesn't live up to its name; it just happens that the premium flagship market is simply so competitive, it's not only just the cameras I care about when choosing my next phone. So yes, usability out of the box does matter.

As said, if it's good cameras you want, go straight for the P40 Pro+, because it already exceeds other 2020 flagships in this regard. Second, if you want a phone that lasts long enough, the Pro+ would be your next option after you consider the regular Pro variant. Finally, if it's just overall flagship performance you're interested in, the P40 Pro+ doesn't match up against the OnePlus 8 series solely because it's a better benchmark and real-world performer for significantly less moolah (starts from just S$998). The P40 Pro+'s display also caps out at 1,200p resolution and 90Hz refresh, which is not the same league as the 1440p, 120Hz displays on the OnePlus 8 Pro (even the Samsung Galaxy S20 series can't run 120Hz refresh rates with 1440p quality, either).

There is one other area besides photography that the Huawei P40 Pro+ aces the competition - storage. Among the premium flagship tier, it is the only phone that offers a massive 512GB internal storage, plus offering expandable memory, albeit via its proprietary Nano Memory card. Comparatively, Oppo has no expandable memory, whereas Samsung Galaxy S20 Ultra in Singapore is only offered with 128GB internal storage! That's something to think about if you're looking for reasons to lean over to the Huawei camp and give the HMS system a shot (and its great set of lenses). With all that said, we'd also like to reiterate that the P40 Pro+ clearly meets the mark as a premium flagship device, which is further bolstered by the tremendous effort Huawei put into developing HMS and AppGallery. It's really shaping up properly with visible thoughtfulness and consideration. There truly is a plethora of local-specific apps in Huawei's app store for all your core daily living needs, and it's still growing even as we publish this review. I could also sideload my preferred Android gaming and messaging apps, and it's easier now with the inclusion of Petal Search. Pair it with the excellent camera package, strong performance and massive storage capacity, and the Huawei P40 Pro+ can still be a premium flagship winner in your eyes.