ASUS ZenFone 5 - Going Beyond the PadFone 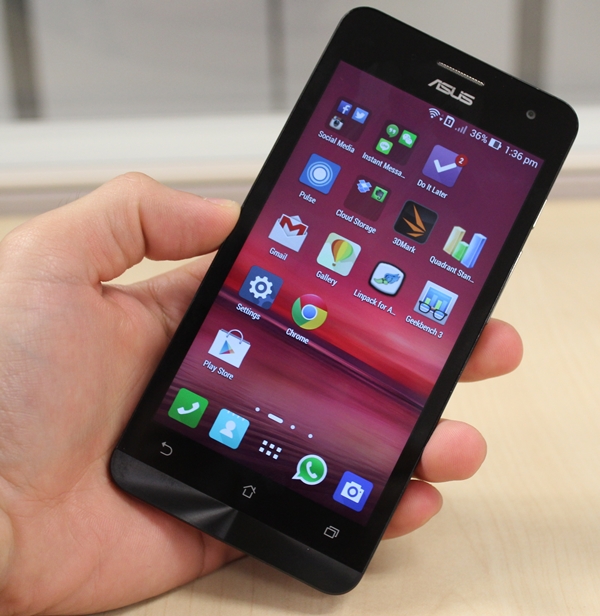 For the past two years, ASUS had been focusing its efforts in the high-end smartphone market with its PadFone series. However, the growing saturation at this segment is now forcing phone makers (including ASUS) to shift their focus to the entry and mid-range market segments. In addition, new players such as Oppo and Xiaomi are pressurizing the entire industry into a cut-throat price competition.

60 HardwareZone readers recently had the opportunity to test out the ZenFone 5 thanks to ASUS Singapore. Five participants got to bring back the phone to try for a week and gave their take on the ZenFone 5.

The ZenFone 5 is slated for a launch in Singapore later this month with a retail price of S$249, which puts it in the same league as the HTC Desire 610, Oppo Find 5 Mini, Motorola Moto G, and Xiaomi Redmi. But does the ZenFone 5 have what it takes to stand out among the stiff competition? That's what we're trying to find out in this review. Before we dive into the details, here's a quick overview of the ZenFone family:

From an ergonomics point of view, there's little to criticize about the design and handling of the ZenFone 5. It sports a slightly curved, soft-touch rear that feels great in the palm of our hands. Its matte texture also helps to give a better grip of the device, especially for consumers who find the 5-inch form factor a little too large to hold in one hand. 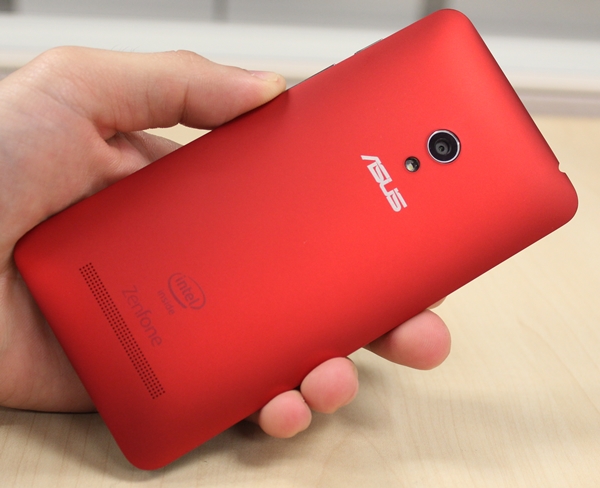 The ZenFone 5's rear shell is removable too, hence you can switch to other colored options, like red, purple, white. or black. Similar to the Xiaomi Redmi, there is a slit at the bottom corner (left side if the display is facing upwards) where you can easily slide your fingernail in to pry it open. 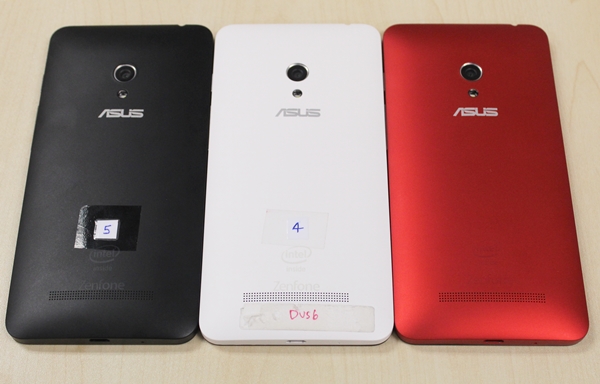 With the rear cover off, you will see three card slots - two in the center and one at the top right corner. The two slots in the center are reserved for micro-SIM cards and both support 3G Dual-Cell High-Speed Packet Access Plus (DC-HSPA+) network speeds of up to 42Mbps. Not all dual-SIM smartphones can support 3G speeds on both SIM cards due to power consumption issues. Having said that, the Motorola Moto G and Oppo Find 5 Mini are the two other dual-SIM phones that support 3G speeds on both slots. The remaining slot at the top right corner is the microSD card slot, and it supports up to 64GB. Out of the box, the ZenFone 5 has 4.33GB of available storage space after updating all the preloaded apps. 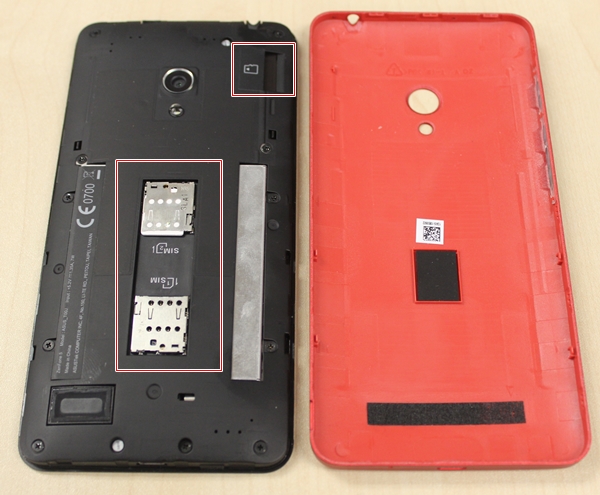 The front panel is dominated by a 5-inch display with three capacitive navigation buttons at the bottom. In line with most recent Android smartphones, ASUS has replaced the Menu key with Recent Apps. A tap on the Recent Apps key will bring you to the multitasking menu where you can easily close/quit apps by sliding them off screen left or right, while pressing and holding the same key will give you an overview of the home screen panels. As there is no backlight for the buttons, your thumb may have to wander around the deck to find the correct key in dark environments. 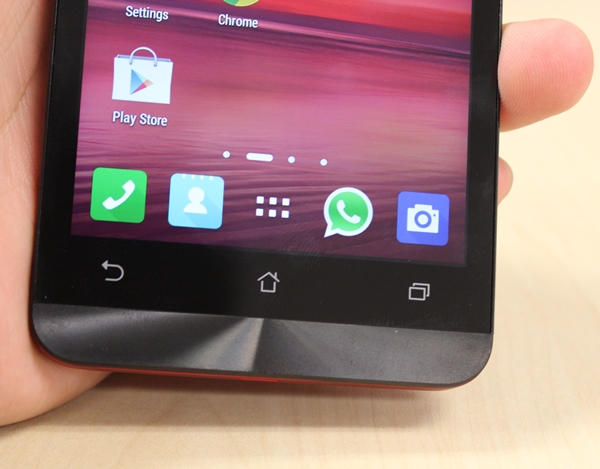 Below the navigation keys is an accent with the iconic concentric circle finish that is inspired from the ASUS ZenBook. To achieve that fine texture and premium look, ASUS claims that it has to carry out precise CNC milling with 45-degree diamond cuts at an exactly 0.13mm pitch. If this is not a strong testament to ASUS's focus on design and build quality in the ZenFone series, we don't know what is.

The ZenFone 5 comes with a 5-inch HD (1,280 x 720 pixels) IPS+ display which has a layer of Corning Gorilla Glass 3 for extra protection against scratches. As expected, the display delivers great clarity, lively colors, and excellent viewing angles. You should not worry about accidental touches to the display as the bezel provides ample space to rest your fingers when holding the phone.

ASUS touts the display has a super-fast response time of 60ms. According to ASUS' internal lab testing report, this is faster than the Samsung Galaxy Note 3 (65ms), Apple iPhone 5 (73ms), and Sony Xperia Z (105ms). In reality, we couldn't really tell whether the ZenFone 5 is faster in everyday operation than the other phones we've used. We reckon that ASUS merely wants you to know that the midrange ZenFone 5 is comparable to some Android flagship smartphones of 2013. 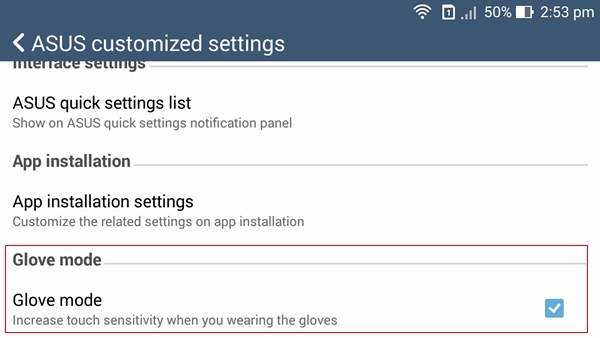 ASUS finally took the leap and developed a customized interface from scratch with its new ZenFone series. Previously, its PadFone smartphones run on an almost-stock Android interface with minimal customizations, while competing smartphones from HTC, LG, and Samsung went all out to modify the Android interface.

We've explored the five notable features of ZenUI in a dedicated article, hence we will not discuss about them again. Instead, we will focus on the relevance of these features and whether they are practical in our daily usage.

One of the minor yet useful features of What's Next that got our thumbs up is the countdown timer to the next event. As shown in the screenshots above, What's Next does a real-time countdown to the Parallels Access Launch Event. We can imagine this countdown timer feature to be very handy for consumers who are too busy to take note of the time.

As the name of the app suggests, this feature will help you remember the important things. In the first screenshot above, notice that you can add a missed call, an unread text message, and email to Do It Later. There is an option to respond to the particular item recorded in the app, which is pretty useful as you do not need to exit Do It Later to call back, read the email, or reply to the text message.

Do It Later has its limitation though; it is only supported in certain apps such as the stock browser (not Google Chrome), stock email app (not Gmail), and text messages. Unread messages from other instant messaging (IM) apps such as WhatsApp cannot be placed in Do It Later. With consumers relying more on third party IM apps to communicate, Do It Later may not be as useful. As someone who uses Tasks from Team Tasks to sync with Google Tasks as my to-do-list, I wasn't sold on the concept of Do It Later as it does not offer anything better than what Tasks currently provide.

Left and Right Swipe for System Notifications and Quick Settings

The stock Android interface typically has a swipe-down notification panel where you can view the notifications and also access quick settings. ASUS decided to derail from that standard and implemented a different method: a swipe-down gesture closer to the left will give you access to System Notifications, and a similar action on the right will jump to Quick Settings.

By default, a swipe-down in the center will still bring you to System Notifications. You can easily switch between the two panels by tapping on the third icon to the right. To be fair, this method is also used by HTC, Oppo, and Sony in their phones. If you are using an Android phone other than these three brands, this is one of the first things that you have to get used to.