Remember months ago when we reported the founder of Oculus VR saying that the Oculus Rift would be in the ballpark of around US$350? We found out today that his ballpark is obviously a very different one than most of us were expecting.

When Oculus VR made news earlier in the week when they announced that the Oculus Rift VR headset would go on sale today, many were puzzled why the company didn't disclose the pricing of the anticipated headset. Now we know why.

The Oculus Rift will cost US$599 (~$862). Interest parties can pre-order the headset now, with March 28th being the expect ship date for the product.

It's safe to say nobody expected this. We'd pegged the headset being under US$500, with US$399 - $499 being what most people figured it would cost. Imagine the horror when the Oculus Rift's pre-order countdown ran out and the price became available. Response online regarding the pricing seems to be mixed, with most gamers opting to a wait and see approach to see if HTC's Vive headset will be as costly.

So what do you get for US$599? You get the Oculus Rift headset, a sensor unit with the stand, the Oculus Remote (not to be confused with the Oculus Touch controllers, which have been delayed till later this year) and an Xbox One controller. The Oculus Remote is a new device that's meant for navigation and gaming, and it looks incredibly similar to Sony's PS Move motion controller. It's described by Oculus VR as the easiest way to introduce non-gamers to VR. Yes, we have no idea by what they mean by that either.

To coincide with the opening of pre-orders, Oculus VR has also released an Oculus Rift compatibility tool that people can download to see if their machines can run the Oculus Rift headset and games. If you don't want to download the tool, here are the recommended specs for the Oculus Rift. 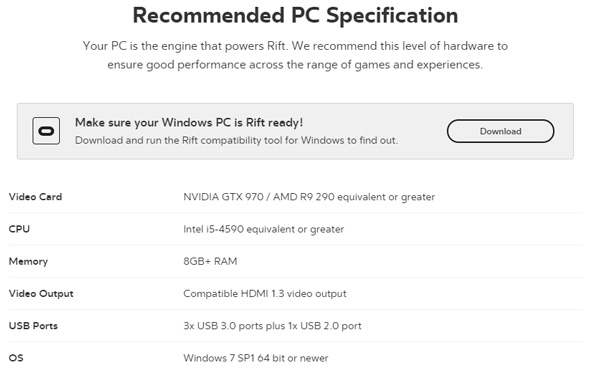 On top of that, Oculus VR has gone the extra mile and have tied up with PC manufacturers like Alienware and ASUS to create their own Oculus Ready label, to signify that the machine carrying the label is adequate to run the Oculus Rift headset and games. GPU manufacturer NVIDIA Is also doing the same thing, though theirs is a more generic VR Ready label.

While Singapore isn't on the list of countries where you can pre-order the Oculus Rift, that shouldn't be a problem nowadays with the proliferation of freight forwarders like Comgateway or V-Post. While getting it might not be an issue, one wonders, at the current asking price of the Oculus Rift, is it worth it to be an early adopter for technology that might not be around in the next few years?

Needless to say, if the HTC Vive and Sony's PS VR are priced much lower, the Oculus Rift might be in trouble with its pricing.

Join HWZ's Telegram channel here and catch all the latest tech news!
Our articles may contain affiliate links. If you buy through these links, we may earn a small commission.
Previous Story
Dummy unit of Apple iPhone 7c surfaces, looks exactly like a smaller iPhone 6
Next Story
The Touchjet Wave converts any TV to a giant touch-enabled Android tablet!