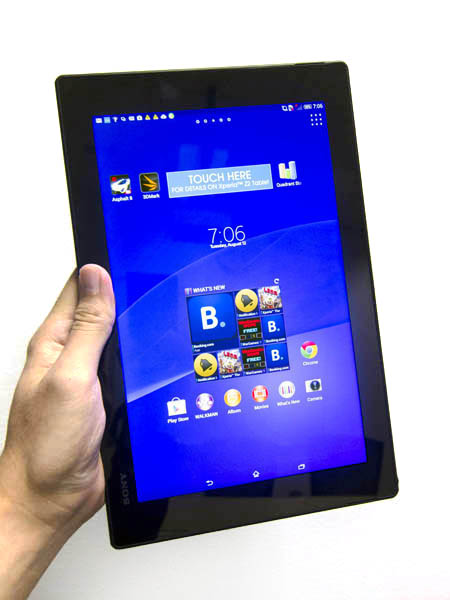 For the past few years, Sony has been attempting to break into the tablet market. In 2011, it released the Tablet S, which had a unique asymmetrical design, but failed to gain much traction, largely due to its bulkiness and weight. Sony followed that up in 2012 with an even more unusual design in the dual-screen Tablet P, which remains the world’s first and only clam shell form factor tablet, but it too was a major flop. in 2013, Sony wisely decided to ditch the unusual form factors, launching the more normal-looking Xperia Tablet series: The Xperia Tablet S and its successor, the Xperia Tablet Z, both of which finally brought the company some mainstream success.

Now that Sony has the formula worked out, it's sticking to it; and this year, it released the Xperia Z2 Tablet, an updated version of the Tablet Z aimed at taking down the likes of the Apple iPad Air and the Samsung Galaxy Tab S 10.5. The followup to the Tablet Z gets a big boost in performance, with the Z2 now sporting a 2.3GHz Qualcomm Snapdragon 801 processor, and 3GB RAM. It's also more water resistant than the old Tablet Z, and is rated IP58 (compared to IP57 for its predecessor). Even with these improvements, the already slim tablet has somehow shed some weight, and is even thinner than before - measuring just 6.4mm and weighing a mere 439g. Both stats once again make Sony's flagship tablet the lightest and thinnest 10-inch tablet on the market today. But is this the best high-end tablet around? 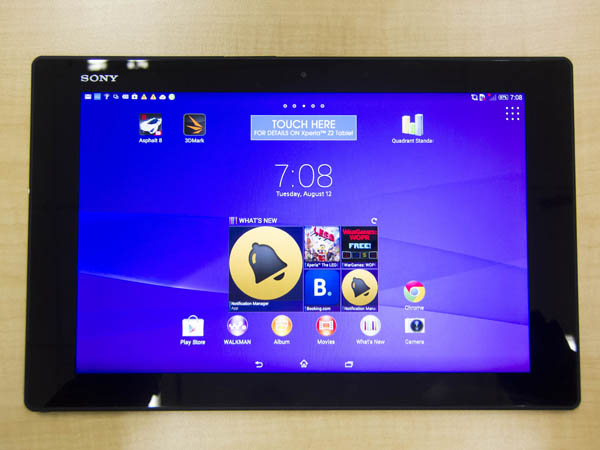 As mentioned, the Xperia Z2 Tablet is the thinnest 10-inch tablet on the market. Measuring just 6.4mm, it's slightly thinner than the Tab S (6.6mm) and much thinner than the iPad Air (7.5mm). Sony has once again utilized the OmniBalance design first seen on the Xperia Z smartphone (and later on the Z1, Z2, Z Ultra, and Tablet Z), and the front of the tablet is completely flat, lacking any hard or capacitive buttons. At the back, the Z2 Tablet is made of grey matte plastic, instead of the glass panel installed on Sony’s phones. The sides of the tablet are aluminum, with all the ports (except the audio jack) covered by pull out flaps to ensure a watertight seal. While the Z2's design looks almost identical to the Tablet Z, we were still amazed by how sleek and thin it looks. In fact, when first comparing it to the Tab S, we had the initial impression that the Z2 was a lot thinner, despite both devices actually being quite similar in this department. 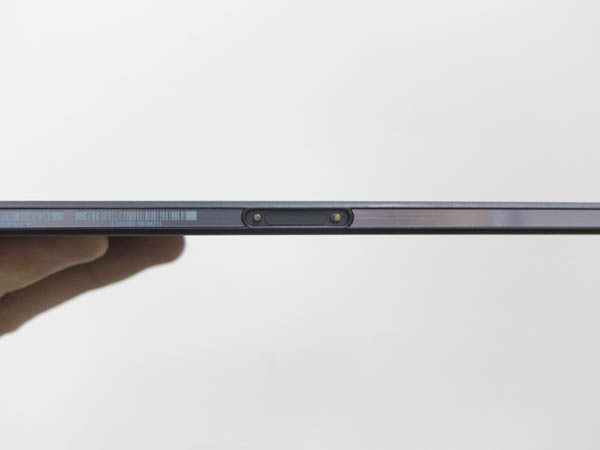 In landscape orientation, the power and volume buttons are situated on the left side of the tablet, and its microSD, microSIM, and microUSB slots and ports situated on the top. There is also an infrared sensor at the top middle of the tablet. This enables the tablet to be turned into a huge remote control - more on that in the software section.

The Z2 isn't just thin, it feels incredibly light too. At 435g, it is 30g lighter than the Tab S 10.5, and 32g lighter than the iPad Air. Holding it with one hand is not only possible, but feels very natural. It's like holding a magazine; in fact, at one point this reviewer unconsciously used the Tablet Z2 to fan himself under the hot weather.

One area which hasn't received an upgrade is the display. The Z2 utilizes the same display as its predecessor, a 10.1-inch TFT IPS touchscreen panel with a 1,920 x 1,200-pixel resolution (a pixel density of 224 ppi). This pixel density is lower than that of the Tab S (288 ppi) and iPad Air (264 ppi); and while it's still good enough for everyday reading, the drop in clarity is discernible, especially on a large 10-inch device.

While the screen is an LCD, it is powered by Sony’s Trilluminous display technology, which allows for a richer amount of colors to be displayed on the screen, letting it compete with other display technologies like Samsung's Super AMOLED screens. Comparing photos on the Z2 Tablet with the Tab S, night scenes appear to be slightly washed out, but most photos look natural and colorful, without being overly saturated. Viewing angles are good too and there is no noticeable color distortion even at extreme angles. Of course, blacks still go deeper on the Tab S, thanks to its AMOLED display. 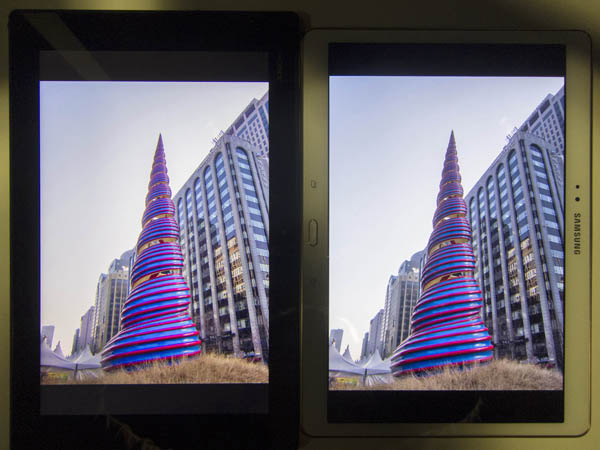 The screen itself is surrounded by thick, black bezels, which unfortunately make the Z2 Tablet slightly larger than it needs to be - it's actually bigger than the 10.5-inch Tab S, despite its smaller screen. On the upside, the big bezels do make the tablet easier to hold without accidentally touching the screen.

It was previously rumored that you could use a pencil to write on the Z2 Tablet, much like the Z Ultra. However, after a brief test, it seems that Sony did not include this feature in the final production of the Z2 Tablet.

Audio on the Z2 is supplied via dual front-facing stereo speakers. Its predecessor, the Xperia Tablet Z, also boasted dual stereo speakers, however they were oddly positioned on the sides of the tablet, which caused noticeable audio dispersion. For the Z2, Sony has corrected this mistake by putting the speakers on the front. Audio is loud and clear and, thanks to Sony's S-Force Front Surround 3D technology, the tablet delivers a rather impressive movie watching experience. 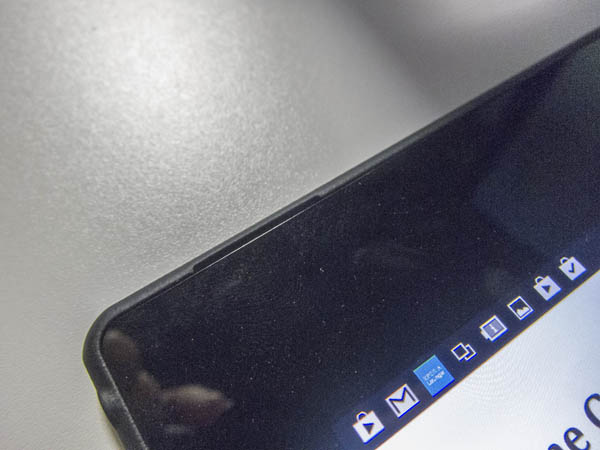 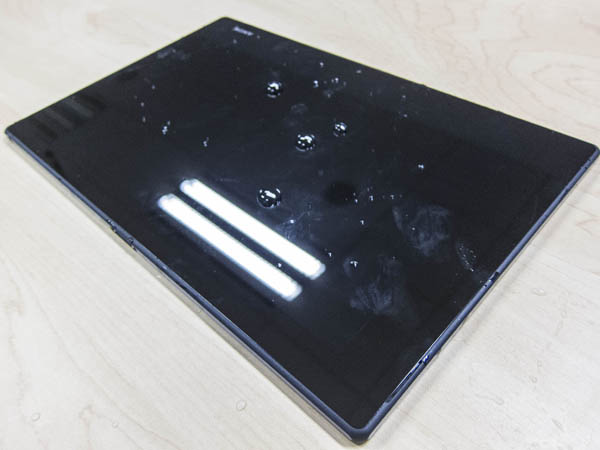 Like the Tablet Z, the Z2 is fully dust and water resistant, and is certified IP58, which actually makes it slightly more resistant to water than the IP57 Tablet Z. Sony has certified that the Z2 can be submersed underwater up to a depth of 1.5m for a maximum of 30 minutes without damage. To test this claim, we first took the Z2 for a wash, once a day, each lasting a minute, and indeed, it came away unscathed.

Next, we took the tablet out for a swim, and once again, the Z2 was up to the task and continued to work despite submersion to about 1m for about 10 minutes. It's worth noting that, like other waterproof devices, the touchscreen won't work underwater, and without a dedicated camera shutter button, it's tricky to take a photo with the Z2 underwater - you'll have to set a timer in the Camera app beforehand. 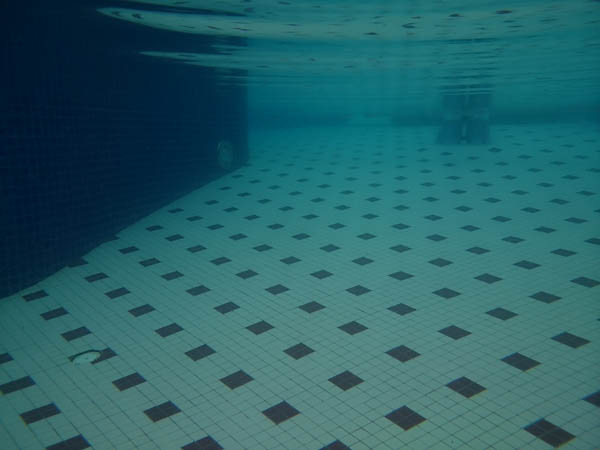 While complete water submersion may seem of questionable use for a tablet, it is of immense benefit to those who enjoy reading at the poolside or like to bring their gadgets into the bathroom.

A warning however: for the waterproof feature to work, please ensure that the port flaps are tightly closed. Also, waterproof does not mean it is waterproof against heavy jets of water. As such, please do not use the Z2 Tablet as a “swimming board” or push it against a jacuzzi jet outlet. 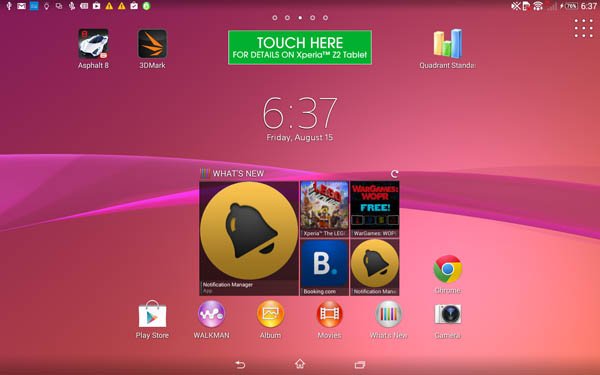 The Sony Xperia Z2 Tablet runs on Android 4.4.4, with Sony's Xperia UI as an overlay. The design of the Xperia UI is very closely aligned to that of stock Android. As mentioned earlier, there are no hard buttons, with all system buttons being on-screen, and always located at the bottom of the screen, much like stock Android. Such a design makes a lot of sense, keeping the buttons within easy reach regardless of orientation, and avoiding accidental button presses when holding the tablet by its sides. 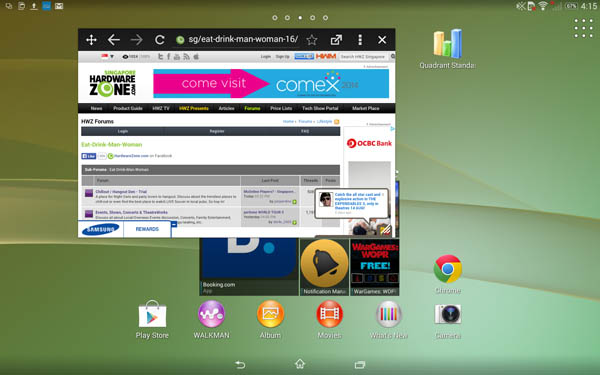 One interesting feature of the Xperia UI is the Xperia small apps. These apps can run as a pop-out window in the screen, much like a window in desktop when not maximized. Stock “small apps” include Browser, Calculator, Remote Control, and Gmail. You can also get more extensions in the Play Store; however, there are very few useful extensions available as of now.

One very good aspect of the Xperia UI is its photo and video gallery apps. Thumbnail previews are rendered and laid out very beautifully. There is also a SenseME slideshow function baked into the Gallery app, whereby it renders all photos in the album in a very aesthetically pleasing and smooth slideshow.

The Z2 Tablet comes with a Remote Control software, which lets you use the tablet’s infrared sensor to control a variety of household appliances, like your TV. It is also the only high-end tablet that comes with an FM radio. While seemingly obsolete, it is still of great use, particularly when listening to radio via mobile data is still not very reliable.

As a complement to music recognition apps such as SoundHound and Shazam, Sony has TrackID baked into the Xperia UI, although, while it managed to identify most songs, there were some Korean songs that returned a Japanese description.

Interestingly, one can actually make calls with the Z2 Tablet, although you will need to have a headset attached or paired, or use the loudspeaker, as the tablet itself does not have an earpiece.

Like the Z Tablet, the Xperia Z2 Tablet supports NFC, which lets it pair with various NFC-capable devices, such as the Creative Sound Blaster Roar or Sony Wireless Speakers, or headsets, such as the Sony SBH-80. It can also be used to make NFC payments, subjected to the support provided by telcos. However, as of now, only SingTel mWallet is supported on the Z2 Tablet.

Write a Review
Compare This | Specifications
Ultra-slim and light build
IP58 dust and water resistant
Smooth UI
Thick bezels
Average battery life
Our articles may contain affiliate links. If you buy through these links, we may earn a small commission.