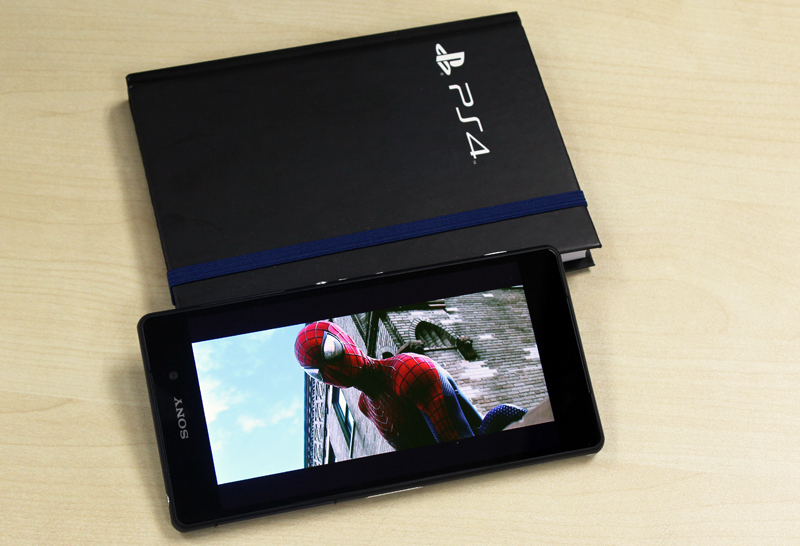 The Xperia Z2 is the third iteration of Sony's flagship Xperia Z line of smartphones. Known for their sleek designs and dust and water resistant builds, the Xperia Z series has done a great deal to put Sony back on the smartphone map. So with two top tier handsets already under its belt in the Z range, and with tough competition from Samsung's Galaxy S5, and HTC's new One M8, expectations are certainly high for the Z2. But with only slightly over a year since the original Xperia Z launched, and just six months since the launch of the Z1, can the Z2 prove itself as more than just a marginal upgrade over previous devices? Let's find out.

As usual, we'll start with the Z2's spec sheet, and for reference, we've also included the Z1 and Z.

Once again available in black, white or purple, at first glance the Xperia Z2 looks much the same as its predecessor. It utilizes the same rectangular OmniBalance design with a one-piece aluminum frame and tempered glass front and back panels. Sony's signature round metallic power button, located as usual, halfway down the right-side of the phone, is also present and accounted for, as are the tightly sealed micro-SIM/micro-USB and microSD card slot port covers, which help give the phone its dust and water resistance. Like the Z1, the Z2 is IP58 rated, which means it can be dunked in up to 1.5m of water for up to 30 minutes, with no risk of damaging the internals.

Visually, the most obvious bit of differentiation from the Z1 are the side panels, which are reversed on the Z2, with the silver accent in the middle instead of around the edges.

Scrutinize a bit further and you'll also spot that the thin glossy plastic bezels seen on the Z1 between the frame and the glass panels have disappeared, resulting in a cleaner overall aesthetic. 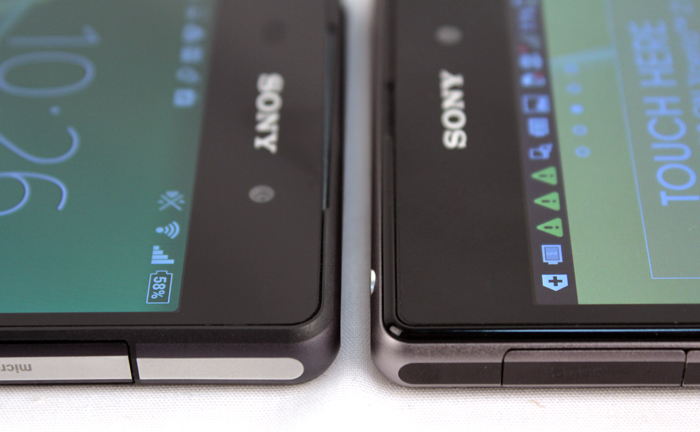 Pick up both a Z2 and a Z1 and you'll discover that the Z2 is actually slightly thinner and lighter than its predecessor. It is however, a fraction longer, although this can be forgiven considering that its display is also 0.2-inches bigger - all of which is additional vertical screen space. Best of all, we're pleased to see that Sony has finally ditched the awful anti-shatter film it laid over the Z and Z1 screens, which ended up scratching far easier than the glass beneath it and also gave the displays a plasticky feel. The Z2 display is raw, naked glass - the way it was meant to be. Still a major fingerprint magnet though. 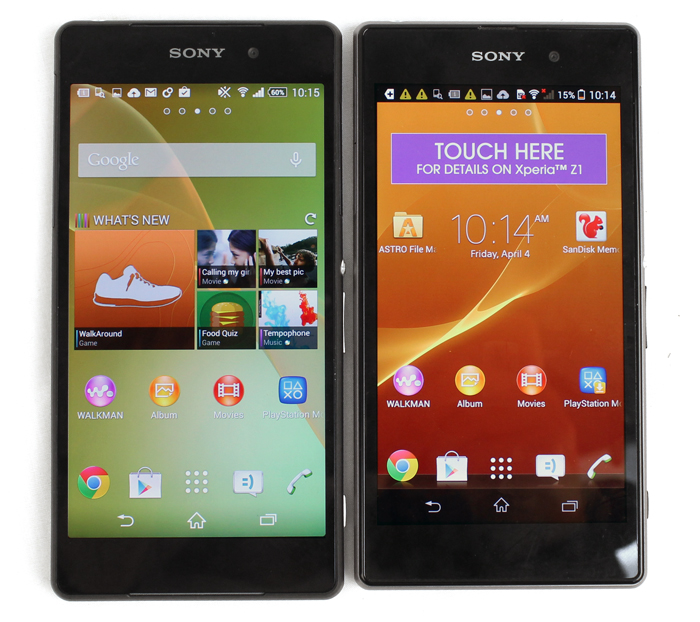 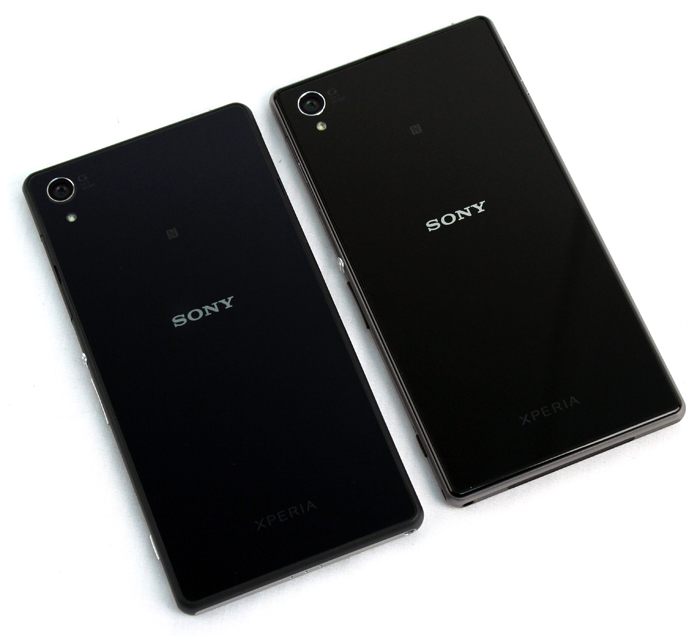 Upon closer inspection, you'll also notice a slightly longer camera shutter button, a neat, front facing stereo speaker setup - you can barely see the thin speaker grilles at the top and bottom of the phone - and the relocation of the lanyard hole from the bottom right to the bottom left - in its old position, lanyards had a tendency to get in the way or awkwardly jut into the palm of right-handed users.

The Z2's Triluminos mobile display is not only slightly larger, it's also the first IPS display in the Xperia Z range, making its viewing angles far superior to that of the Z and Z1. The Z2 is also the first phone to utilize Sony's new Live Color LED imaging technology. While Sony hasn't gone into complete detail on how Live Color LED works, it's described as "the use of red and green phosphor with blue LEDs and customized color filters to produce a brighter and more uniform light". Compared to the Z1's display, colors on the Z2 look more vibrant, but thankfully without the accompanying oversaturation often seen on OLED displays. 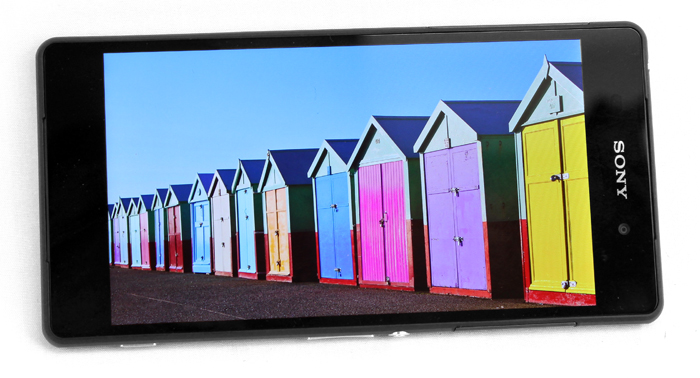 Pixel resolution remains the same on the Z2 at 1920 x 1080 pixels, while the screen size has increased, resulting in a slightly lower pixel density of 423 pixels per inch - the Z1's is 441 - but the entire screen remains pin sharp. Like the Z1, the Z2's display is very bright with good contrast and deep blacks.

Some of the best audio we've heard from a smartphone came from the HTC One, thanks in large part due to its extra loud front-facing BoomSound stereo speakers. Sony seems to have had a similar idea with the Z2, which also boasts two front-facing stereo speakers, neatly positioned as narrow slits at the top and bottom of the screen. 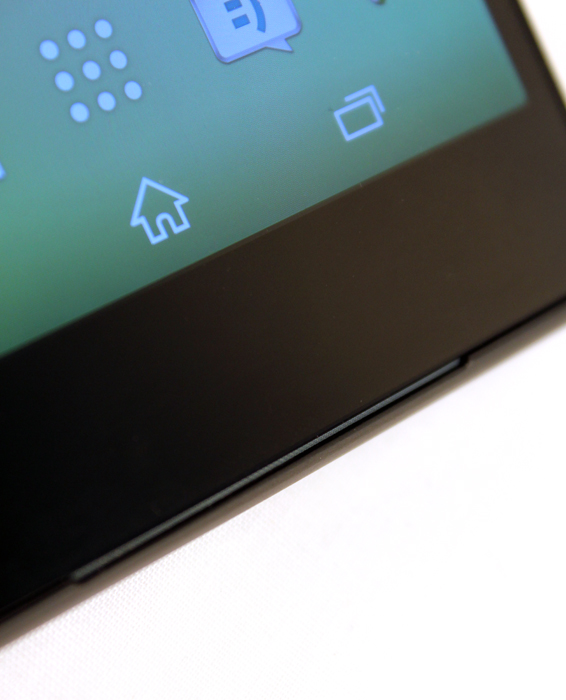 Compared to the Z1, sound on the Z2 was noticeable louder and clearer. We also found the Z2 much better for watching content in landscape orientation as the dual speaker positioning no longer results in one-directional sound. Compared to HTC's new One M8, which boasts improved BoomSound stereo speakers, we found both phones to be about equal in terms of volume and clarity, but we felt that the One M8 produced a slightly wider sound, with a bit more bass and tonal range. Having said that, both the One M8 and Z2 are fantastic devices for listening to music or watching content, and are far better than anything else currently available, although the slightly larger screen of the Z2 probably makes it the better choice for movie watching. 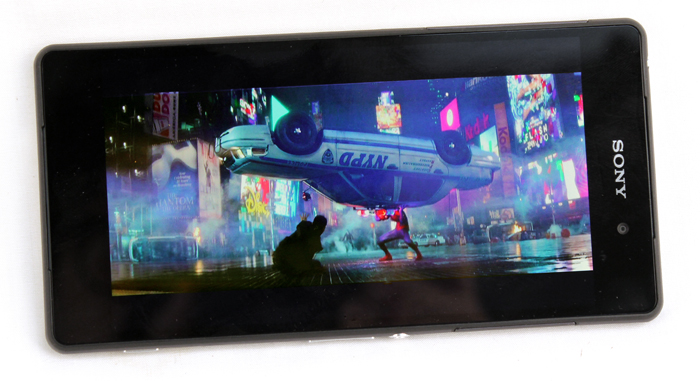 For those that prefer listening to music through their headphones, the Z2 also features digital noise-cancelling technology. But before you get too excited, know that the technology in question only works when specifically paired with Sony's new MDR-NC31EM earphones. In some countries these earphones are bundled for free with the Z2 - unfortunately, Singapore is not one of them, and we're stuck with the regular old earphones in the box. The MDR-NC31EM set is available as a separate accessory, and can be purchased for S$79. Unfortunately, as we don't have a set available, we're unable to comment on the effectiveness of the noise cancellation.

And finally, while it will likely only appeal to audiophiles, as a nice touch, the Z2 also features USB DAC support out of the box.

With the upgrade to Android KitKat 4.4, the Xperia Z2 finally has an OS to match its clean, minimalist aesthetic. As usual Sony has also included a number of its own optimizations and apps to enhance your user experience - a number of which seem to be 'inspired' by the competition. For example, the new Smart Backlight feature will keep the backlight on as long as you're looking at the phone, just like Samsung's Smart Stay Function. 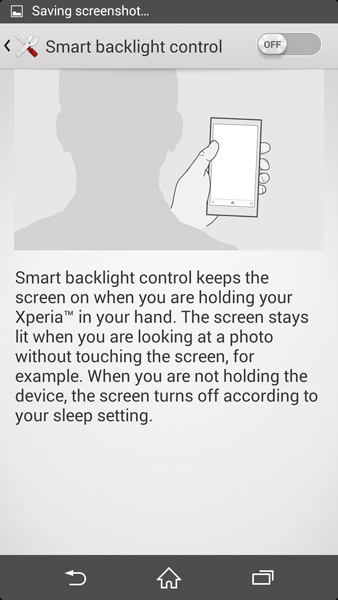 The Z2 also includes one of our favorite features from LG's G2 and G Pro 2 smartphones, KnockOn, or in this case, the less creatively named "Tap to wake up", which lets you double tap the screen to wake it up. Surprisingly - or perhaps deliberately - these functions are turned off by default, and are buried deep within the Z2's settings menu (both can be found in the Display submenu). 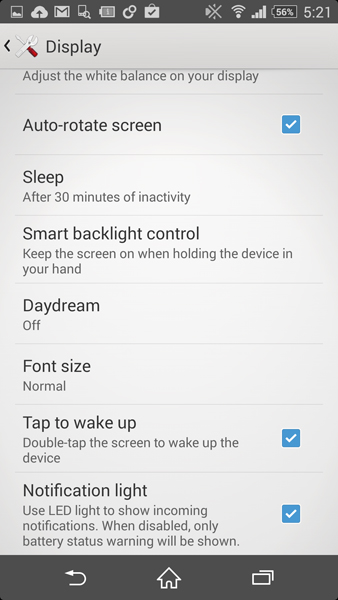 Like a few other flagship smartphones, the Z2 also includes a motion gesture call answer/reject feature, which lets you simply bring the phone to your ear to answer a call, or shake it to reject. 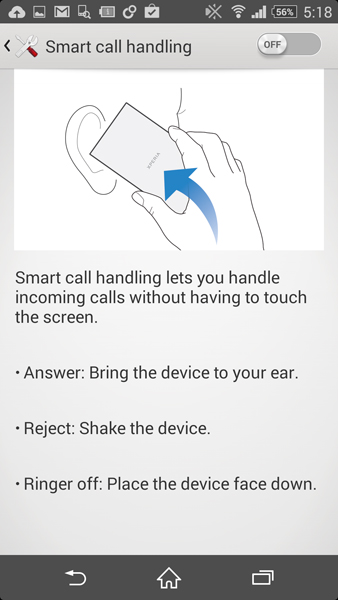