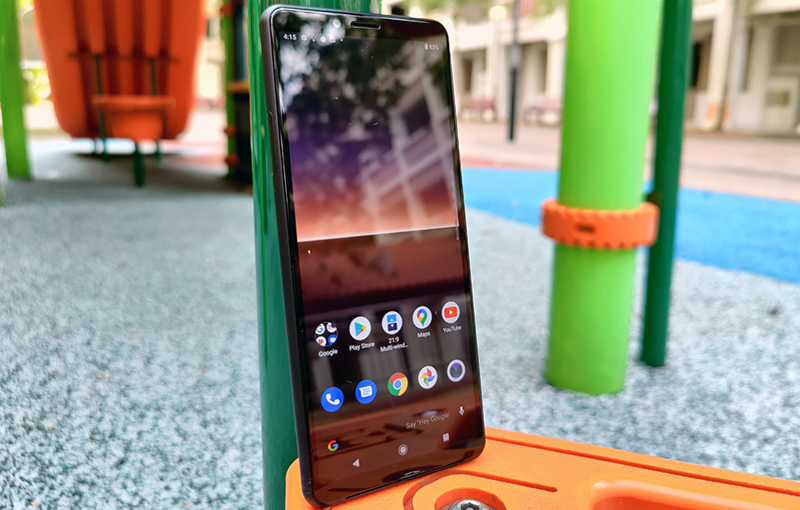 It’s been a while since Sony Mobile last brought a mid-range device to Singapore, especially ever since they’ve announced the ‘defocusing’ of markets around the world. The last big splash they made here was through its flagship Sony Xperia 1 last year, which packed a 4K OLED display and a top-tier processor of its time.

Fast forward to date, and we have the mid-range Sony Xperia 10 II, which is the second version of the Sony Xperia 10 smartphone range. Fundamentally, it’s the same phone like its predecessor since Sony believes its got the user experience down pat, but it comes with some upgraded parts.

Returning features include the 6-inch, 21:9 display ratio, OLED panel at Full HD+ resolution which follows the aspect ratio of most movies while fitting more vertical content at one glance. More vertical viewing space is great for emails, reading documents and viewing more of your social media feeds easily. The display also has Multi-Window, a feature that lets you fire up two apps simultaneously for multi-tasking. Underneath the screen is a Qualcomm Snapdragon 665 chipset and a 3,600mAh battery powering its cinematic panel.

Despite its mid-range positioning and already touting a crisp display, the Sony Xperia 10 II also packs several other flagship smartphone traits. For example, it uses Gorilla Glass 6, which has 1.5 times better drop resistance than the preceding glassware and is the same glass type as the premium Samsung Galaxy S20 series. Adding to that durability is its IP65/68-certified water resistance rating, a marked improvement from its preceding model which had unrated resistance. It also has a triple camera system on the rear, which is one more lens than its predecessor.

At S$569, will this be the mid-range smartphone to beat, or is it just another mid-range phone with some bells and whistles? Let’s find out right after the unboxing jump:- 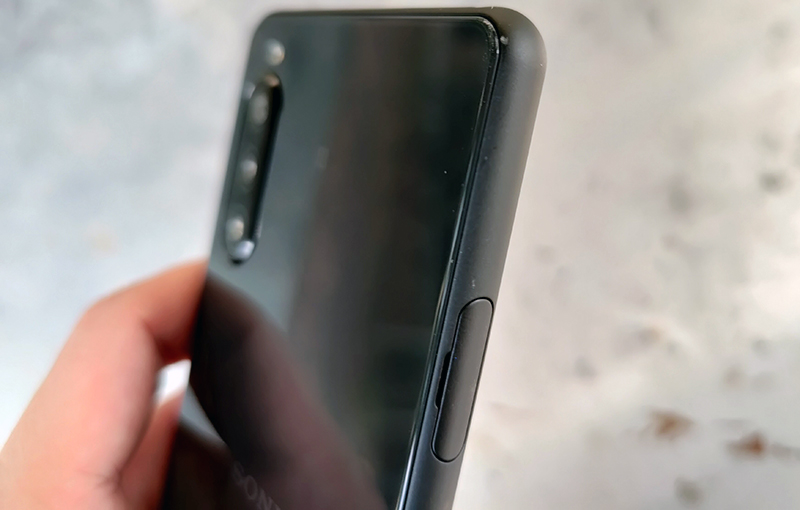 After checking the official website, we realised that Sony doesn’t have a fancy name for the design language used on the Xperia 10 II. Nonetheless, it’s easy to fall in love with their aesthetic as they opted for a clean, elegant look, which is a staple in Sony Mobile's design identity. 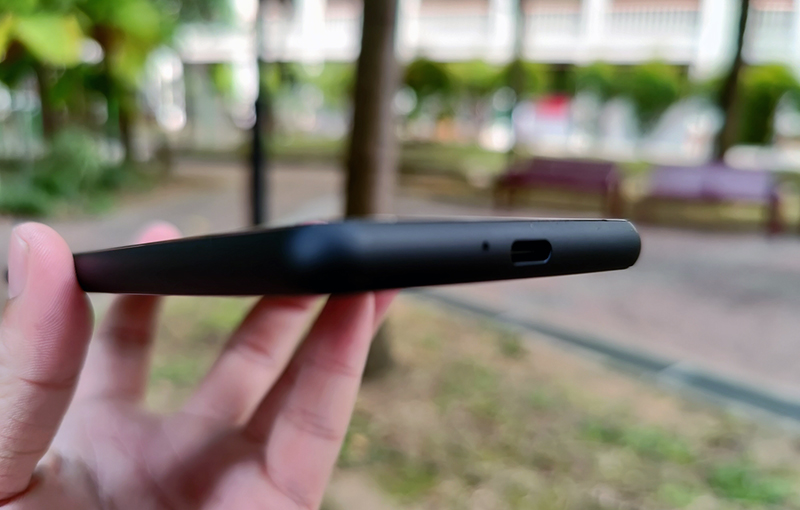 By itself, it features a tall, somewhat narrow body with the display housed around thin bezels on every side of the phone. There’s little to speak of, visually. With the device facing you, the power button on its right doubles as a fingerprint sensor and it sits below the volume rocker. At the top ‘chin’ is a call speaker, with its front camera adjacent to it. A 3.5mm audio jack port is nestled on the top-left of the device, and the left rim is a flap for the dual nano-SIM card tray with a hybrid second slot that can take in a microSD card when needed. The standard USB Type-C port rests dead-centre at the bottom rim with a very well-hidden single-firing speaker. 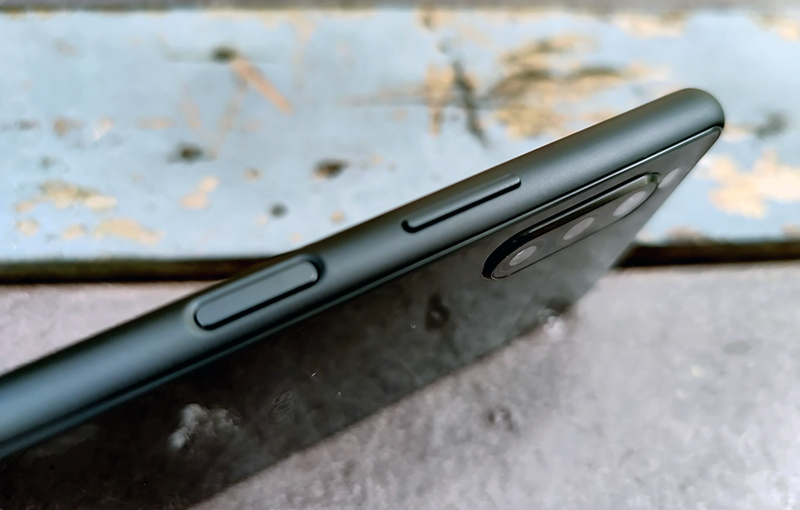 The back is a slate of glass that melds nicely with its metal sides. Despite a glass rear, the colourisation of the device makes it hard to spot any fingerprint smudges. While there’s a slight bump for the rear cameras’ housing, it’s barely noticeable - at least, when you compare it to the Huawei P40 Pro+.

Despite its generic aesthetic, the choice to make a muted-looking smartphone plays very well into the Xperia 10 II’s look and feel. Besides the practical look, it sells itself on durability with its Gorilla Glass 6 and IP65/68-certified water resistance. 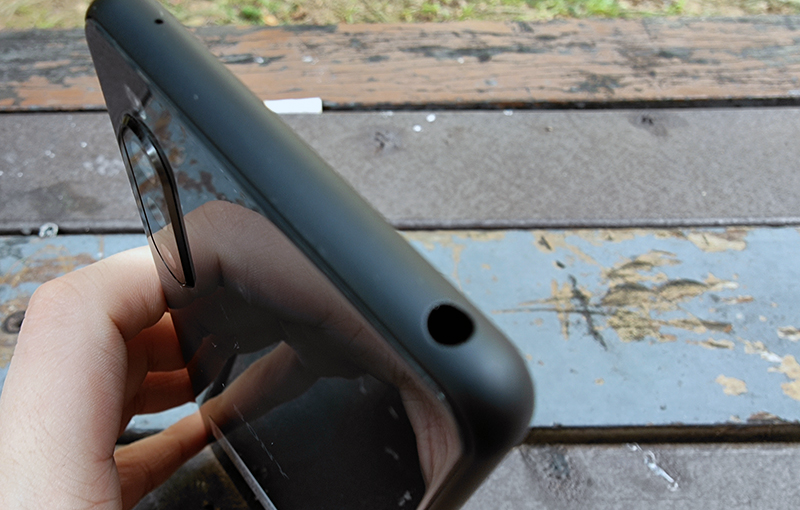 Handling is a breeze even with one hand, given its narrow-body (and a handy feature besides Multi-Window which we’ll get to that later). 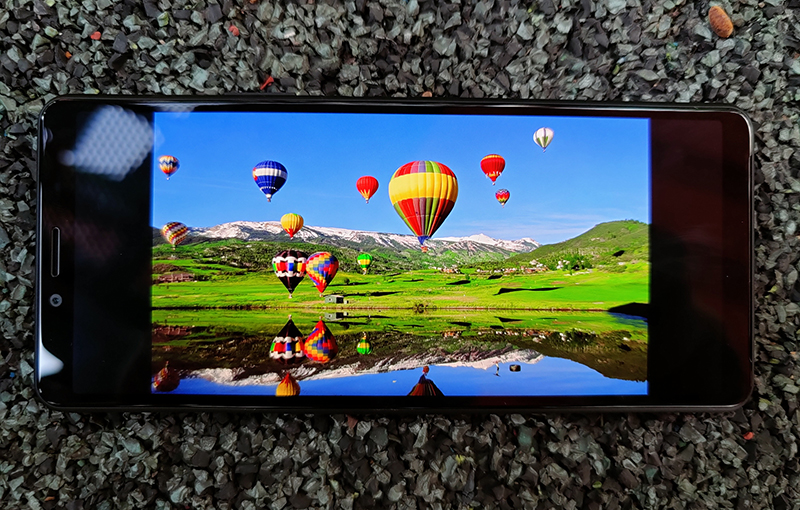 The display is a 6.0-inch OLED panel rated at Full HD+ (2,520 x 1,080 pixels resolution), with a super-tall 21:9 aspect ratio. The ratio is identical to the flagship Xperia 1 and Xperia 1 II, falling in line with Sony’s desire to deliver a cinema-like viewing experience through their phones. From the test image, you can tell that it’s sharp with excellent colourisation and contrast handling. The only gripe is the relatively low maximum brightness of the panel, making it tough to browse under direct sunlight even in the late afternoon.

The display felt luxurious despite the 1080p vertical resolution (when held in landscape mode). It was able to play 60 FPS content on YouTube with no issues too. If you spend a bulk of your phone time watching videos from downloaded or online sources, the Xperia 10 II would be an excellent choice to have. However, we’d recommend plugging into your preferred headphones for audio, since the speaker’s bloated signature betrays the phone’s visual quality. 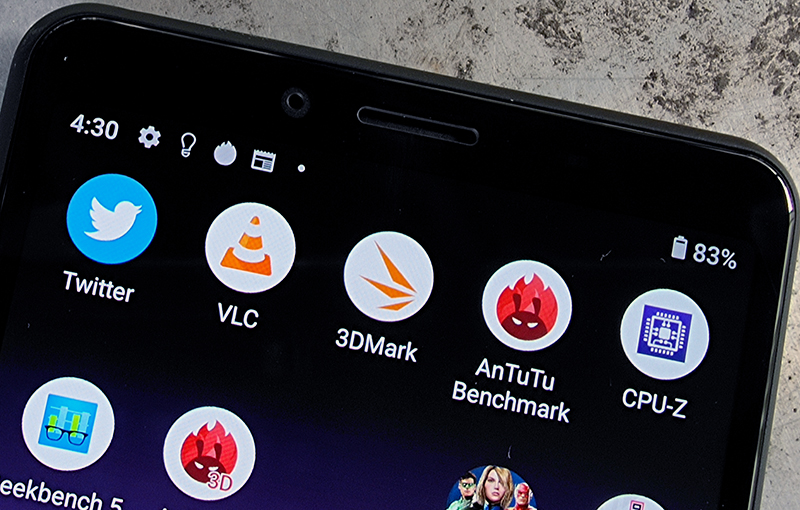 The Sony Xperia 10 II runs on Android 10 using Sony’s reskin. Sony’s interface choices are intimately tied to how they arrange and present information. Fundamentally, there isn’t too big a difference between Sony’s preferred look versus stock Android. Notably, it uses a customised font with its customised menus, as well as its own notifications and drop-down menu. 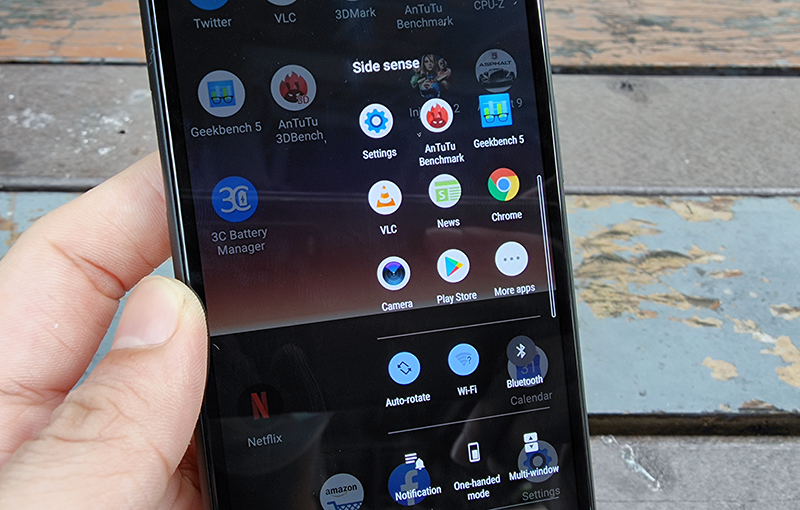 A neat Sony customisation is Side Sense, which makes it even easier for one-handed use. Side Sense is an editable, miniature app drawer of sorts that can be summoned with a double-tap along the side of the device. This will quickly let a user jump into their preferred app with just one hand. You could select, and browse through your social media feeds with only one hand, or start responding to messages by single-handedly opening the messaging app before you begin writing replies (with both thumbs).

Another neat feature is Multi-Window, where Xperia 10 II fully utilises the 21:9 aspect ratio of the display by placing two apps, top-and-bottom of each other. One only needs to start the Multi-Window app to select the two apps and their orientation. It's especially handy if you need to quickly refer to your email inbox while messaging another person, or if you want to multi-task between watching a video and sending replies to others. 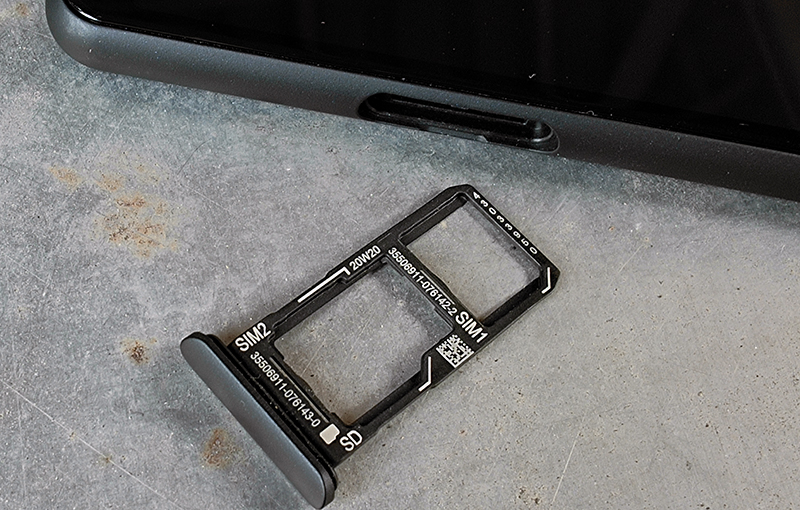 Adding on to its list of user experience features, the phone has a dual nano-SIM card tray with a second slot that can take in expandable storage media (microSD card), and there's even a 3.5mm audio jack which is now increasingly uncommon on mid-range and high-end phones. These features mean the phone accommodates to your needs (wired headphones, more storage), and not the other way around (wireless only and cloud storage option for expansion).

However, not everything about the Sony Xperia 10 II’s user experience is fine and dandy. When unlocking the phone with a PIN, the phone still requires you to hit the ‘enter’ key even if you’re done putting in the correct combination (this step always gets me).

Fingerprint unlocking makes a lot more sense since you don’t need to power on the display to start up your Home Screen. However, prints detection can be a little iffy, with a good 50-50 chance where the phone does not recognise any of my recorded fingerprints at times. This is baffling as we're in 2020 where many phones have mastered traditional fingerprint sensory and have moved on to in-display fingerprint sensors, which are now pegged back against the success rates of unlocking the device with a traditional fingerprint sensor. More amusing is that Sony was one of the pioneers to incorporate a fingerprint sensor with the power button and has served them well in the past. As such, you can see why we're taken aback by how the Xperia 10 II manages phone unlocking. 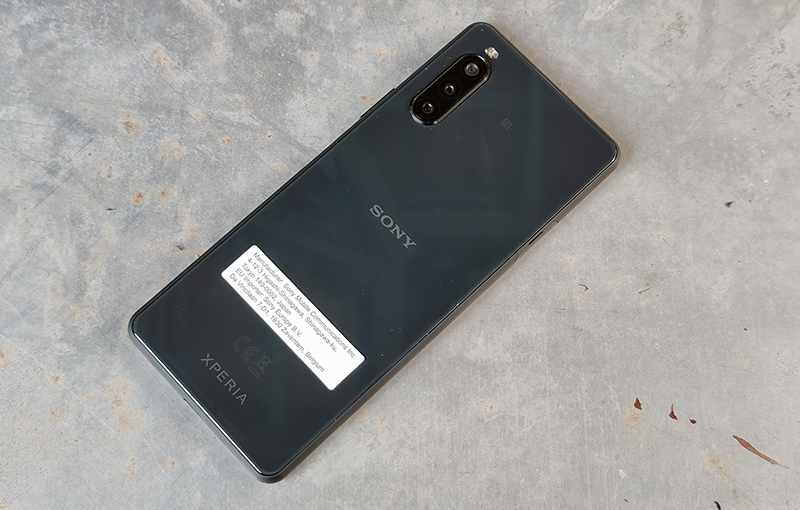 The Xperia 10 II doesn’t have the always-on display feature nor does it have a wake-up function. When you fish it out of your pocket or lift it off a desk to check the time or your notifications, you're required to hit the power button once. The annoying bit? It also counts as one fingerprint unlocking attempt, taking away one of your three tries before it locks you out for 30 seconds (if you fail).

Finally, there’s a noticeable lag time when firing up apps, loading websites and booting up social media feeds for browsing. Games have longer load times with occasional dips in framerates. While we aren’t expecting it to have a buttery smooth performance like the flagships phones of 2020, these bits are enough to feel noticeable in day-to-day use.