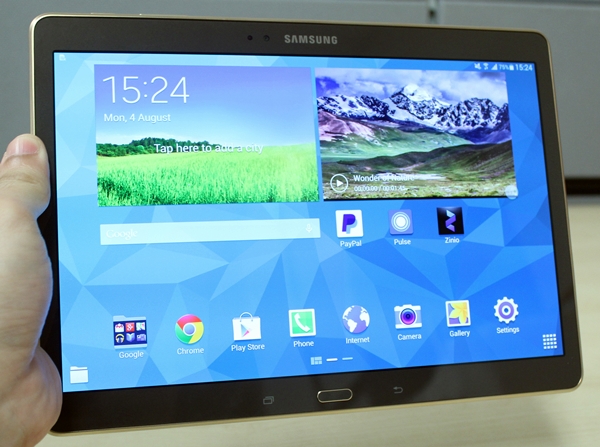 Earlier this year, Samsung told analysts that more phablet and tablet devices will be released this year. Keeping to its promise, we've seen a flood of tablet devices from Samsung in the first six months of 2014.

Aiming to set a new benchmark for the tablet industry, the Galaxy Tab S range is designed to provide an unrivaled visual and entertainment experience on the go. This is made possible by the implementation of Super AMOLED display panels - its first since the Galaxy Tab 7.7 in 2011 - and ultra portable form factors. HardwareZone members who managed to sign-up for our Tablet Revolution PlayTest event were privileged to be the first in Singapore to test drive the Galaxy Tab S and other tablet devices. While that was a month ago, HardwareZone has since compared the Galaxy Tab S (8.4) edition in our 8-inch tablet shootout.

Meanwhile, the HardwareZone team spent more time to use the 10.5-inch version intimately, put it through its paces and see whether it is able to fulfill lofty expectations set for itself. Below is a quick overview of the Galaxy Tab S family before we head into more details:-

(Note: We've done a hands-on article with the Tab S tablets, so we'll summarize the key points here instead of going into great length again.)

In a nutshell, Samsung brings the design language of its flagship Galaxy S5 smartphone over to the Galaxy Tab S (but without the dust and water protection IP67 rating of their Galaxy S5). While Samsung revealed that an upcoming high-end smartphone will be using "new materials" for its construction, we have yet to see the company take a similar approach for its recent tablets. In case you don't know, the Galaxy Tab 7.7 has a brushed aluminum finish on its rear and that's as close to metal as you can get on a Samsung tablet. 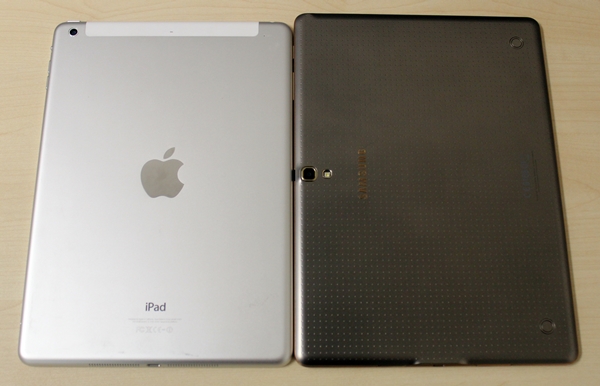 Nonetheless, using plastic has its pros too as it keeps the form factor lightweight, is resistant to fingerprints, smudges and scratches. The Tab S (10.5) is the second lightest tablet of its class with a weight of 467g. In comparison, the Sony Xperia Z2 Tablet (LTE) weighs only 439g. The Tab S (10.5) is also a hairline thicker than the Sony slate (6.4mm) at 6.6mm.

Infighting among the Android camp is not Samsung's objective; it wants to be better than the Apple iPad Air on paper and in reality. During our past few weeks of usage, this is indeed true. We had no qualms about bringing the Tab S (10.5) wherever we went as it was really thin and lightweight. For once, a 10-inch tablet feels good for one-handed operation. It is impressive to see how far Samsung has come from its first generation of Galaxy Tab 10.1, which now feels like a brick with its 8.6mm thick chassis and weight of 565g. 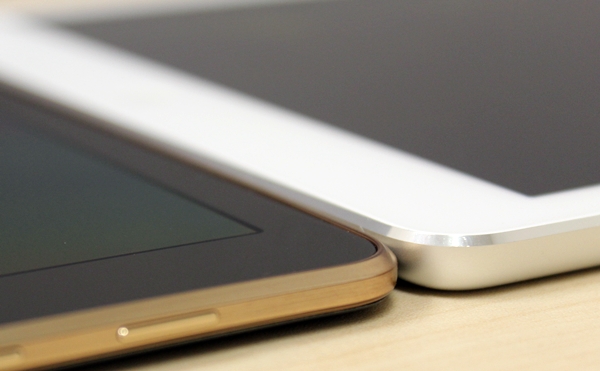 The rear of the Tab S has two button points at each side, allowing you to attach the official Book Cover accessory to the tablet. The Book Cover has two buttons - dubbed Simple Clickers - which you attach directly to the two points on the tablet. The attachment is similar to how you button up a shirt. While it is generally more secure than the magnetic covers used by the Apple Smart Covers for its iPads, it is slightly more troublesome to take it out.

If you are interested to get the Book Cover, it can be yours at a rather hefty price tag of S$98 for the Tab S (10.5). In comparison, Apple's Smart Case for the iPad Air costs a whopping S$118. You get a more premium leather design and the same full protection coverage, but you are limited to two positions (keyboard stand and FaceTime/Film stand). The Super AMOLED display is no doubt the main highlight of the show on the Galaxy Tab S. Samsung has been using this display technology for its flagship smartphones since the Galaxy S in 2010. It made a brief appearance on the Galaxy Tab 7.7 in 2011 and was used by Toshiba for its Regza Tablet AT270 in 2012.

Why wasn't the AMOLED panel used on a wider scale for tablets? If you haven't noticed, both the Galaxy Tab 7.7 and Regza Tablet AT270 cost a bomb at S$898 and S$899 respectively. We believed the cost of developing and manufacturing larger AMOLED displays was the main deterrence back then. After three years, Samsung might have found a more cost effective way of making these panels since the technology is more matured now.

Focusing back on the Galaxy Tab S, Samsung totally nailed it with its choice of using AMOLED on the Tab S (10.5). We've not experienced such a vibrant and eye-popping display on a tablet some time now. The blacks look really black and colors are really rich albeit a little oversaturated. Photos and movies look more alive on the Tab S (10.5) when compared to other tablets such as the Apple iPad Air. 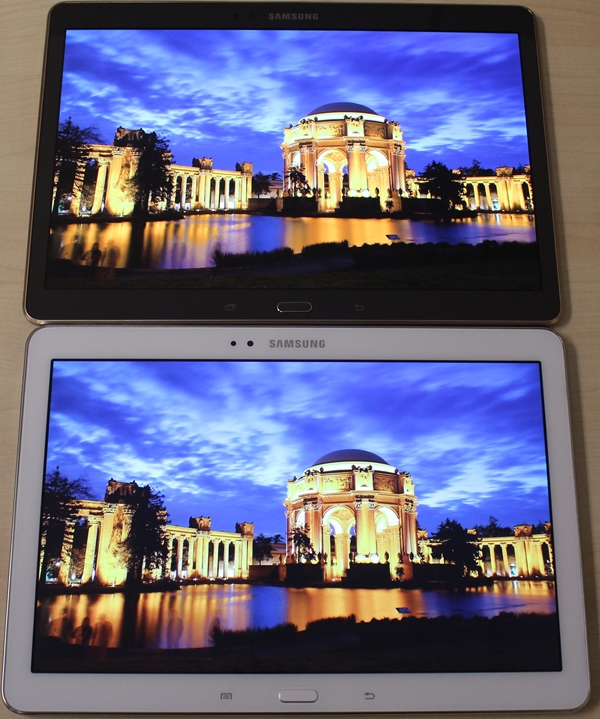 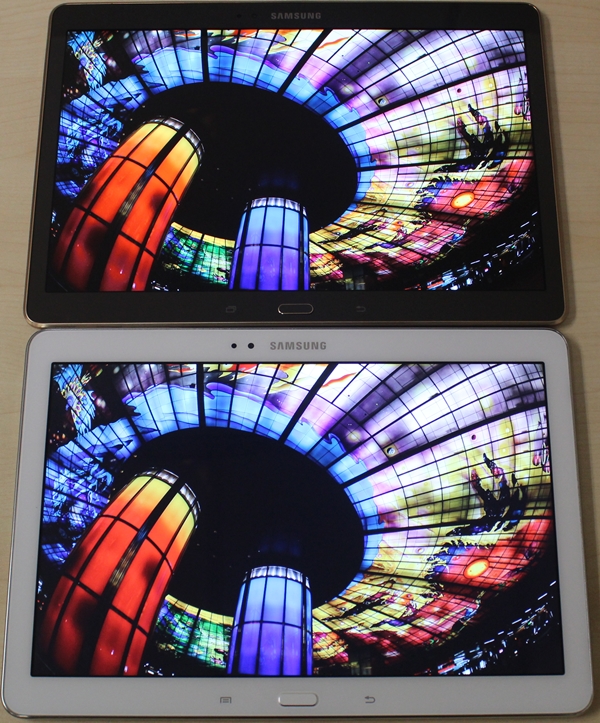 Our observations were confirmed by participants in the recent HardwareZone's PlayTest event where the Tab S devices were showcased alongside its ASUS, Huawei, LG, Lenovo and Microsoft counterparts. The most common feedback we received from the participants was that the Tab S devices looked really better than any of its competitors, including Samsung's own Tab Pro devices. It also helps that the display resolution is rather higher at 2,560 x 1,600 pixels, which translates to a pixel density of 287ppi. This is slightly higher than the Apple iPad Air's pixel density of 264ppi. Without going through the technicalities of the AMOLED technology, here's the list of its key benefits to consumers:-

If you dislike the oversaturated colors of the display or want to adjust the screen temperature/color to your preferences, you can do so via Settings > Display > Screen Mode or simply swipe down from the top to access Adaptive Display from the Quick Settings.

Adaptive Display is developed by Samsung to automatically optimize the gamma, brightness, contrast and sharpness to suit different usage scenarios. You also have three other modes to select from: AMOLED Cinema, AMOLED Photo and Basic mode. AMOLED Photo mode is perhaps more suitable to attain a more balanced color saturation profile that some might prefer. 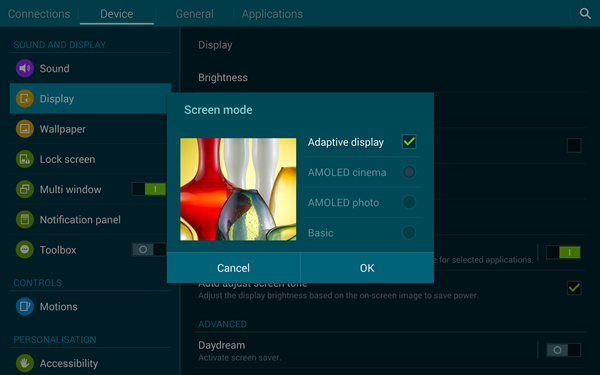 If you haven't known by now, Samsung usually packs everything but the kitchen sink into its flagship devices. The Galaxy Tab S is no exception; not only do you get Android 4.4.2 KitKat, you also get a truckload of Samsung's apps and services which include: 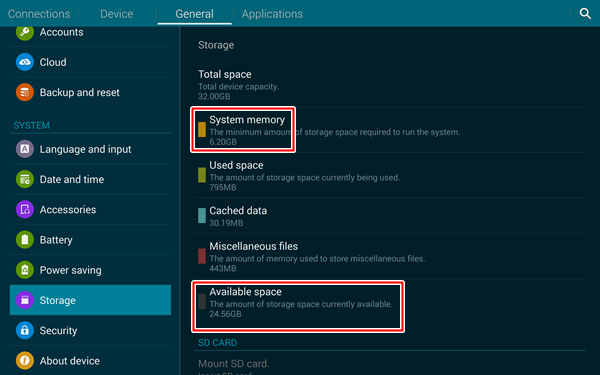 Having said that, you get about 24.56GB of available storage space out of the box and after updating all the preloaded apps. So if the built-in 32GB storage isn't sufficient, there is a microSD memory card slot that supports cards up to 128GB in capacity. Now, let's take a look at some software features: SideSync is not a new feature; it was introduced in 2013 as a PC-Mobile syncing and file management tool between select Samsung Ativ PCs and Galaxy phones. It has been updated to version 3.0 on the Galaxy Tab S devices to accept or reject incoming calls on the tablet if the phone is not within reach. Do note that this call-forwarding function is only supported on the Galaxy Tab S tablets (Wi-Fi only and LTE models), the Galaxy S5 and Note 3 smartphones. Both devices also need to be connected on the same Wi-Fi network. In the absence of a Wi-Fi network, both devices can connect using Wi-Fi Direct.

Besides forwarding calls and text messages, SideSync 3.0 also supports file transfers between the paired devices. File transfer is as easy as dragging a file from the virtual smartphone screen to the tablet's screen. Likewise, you transfer files from the tablet by dragging and dropping them into the virtual smartphone screen. SideSync 3.0 also supports playing music or video files stored in the smartphone via the display and speaker of the tablet. Simply put, if you have a compatible Samsung smartphone, SideSync is a very handy feature. Below is a video explaining some of the SideSync 3.0's features:

The Galaxy Tab S is the first mass market Android tablet to incorporate a fingerprint sensor. Similar to the Galaxy S5, you need to execute a downwards swiping motion over the home button. Setting it up requires you to swipe 8 times for the sensor to recognize your fingerprint.

The fingerprint sensor is also integrated with PayPal, where you can make online payments "securely" with your fingerprint. However, there are two issues that you should take note. First, the PayPal app is designed for smartphones, which means that you have to contend with the portrait orientation of the interface. While this is a minor issue, it bugs us that the user experience is not optimized for tablet usage.

Second, the fingerprint sensor of the Galaxy S5 is reported to be vulnerable to spoofing hacks. To make matter worse, researchers from Germany-based Security Research Labs who performed the hack were able to take over the Paypal account with the duplicated fingerprint. If the Tab S uses the same fingerprint sensor, it will suffer from the same vulnerability and symbolizes a huge setback for the partnership between Samsung and PayPal.

After using for a few days, the user experience is a hit-and-miss affair. As you need to swipe down over the home button, the usage experience is not as convenient as the iPhone 5S' fingerprint scanner. It took us an average of three tries to get it right on the Tab S. 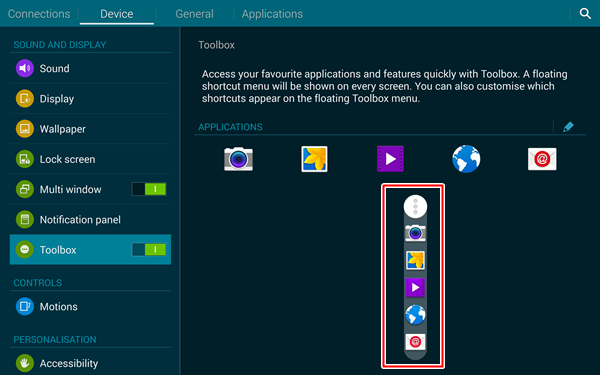 Designed to give you quicker access to a maximum of five apps, Toolbox appears as a floating shortcut menu on every screen. It exists as a circular icon with three dots and when you tap on it, it expands into a drop-down menu. We initially thought the Toolbox was a redundant feature as it seemed to be duplicating the Multi-Window feature, but we realized that it supports more third party apps such as Businessweek+.