A study in excess

The camera is the most significant change to arrive on the Galaxy S20 Ultra, both visually and under the hood. It manifests as a very large and thick camera bump, which houses four rear cameras and the LED flash.

Here's what the camera setup on the phone is like: 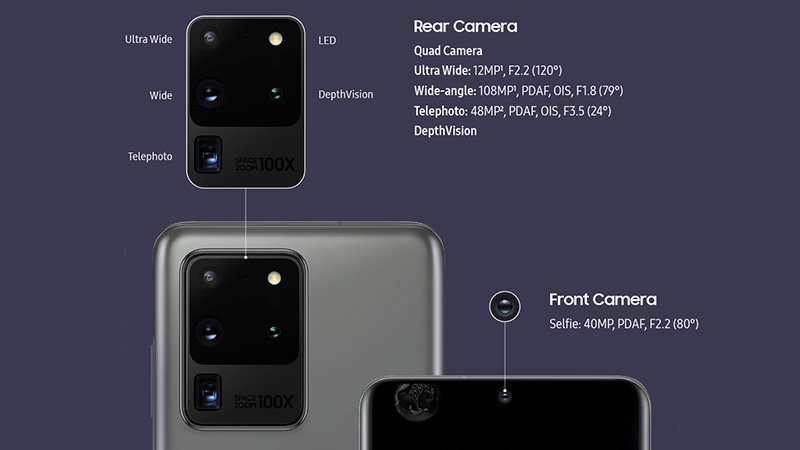 At first glance, this configuration is already nothing short of excessive. Highlights include the 103mm telephoto lens with its 100X Space Zoom, the super high resolution 108MP shooter, and the 40MP front camera. The fact that Samsung has included a 40MP shooter just for selfies says a lot, and the company is clearly making no compromises with the S20 Ultra.

It's debatable what exactly is the headlining feature of this camera though. Is it the 108MP camera, or is it the fact that you can zoom in on faraway objects and pick out details you wouldn't otherwise be able to see with a naked eye? I'm going to have to go with the latter, even if I have my doubts about its actual utility in real world use.

Those of you who love to pore over spec sheets will have noticed that the telephoto lens on the S20 Ultra is seemingly inferior to the one on the S20 and S20+. It is "only" 48MP, versus 64MP on the smaller S20 phones, but the both of them still have 0.8µm pixels. However, the S20 Ultra is the only one that has a 102mm focal length, which lets it focus on objects that are insanely far away.

But phones are very thin devices, and the focal length is limited by how close the sensor is to the lens. To get around this, Samsung uses a lens that resembles a periscope, where a prism is used to refract light from the lens to the sensor at a 90° angle. The sensor and lens array lie flat, instead of being stacked atop each other. By laying out the hardware horizontally, manufacturers have more space available to them and are not limited by how thin the phone needs to be.

This is also referred to as a "folded" lens, and companies like Huawei and Oppo have employed this approach as well. Huawei most notably did so on the P30 Pro, which offers 50X zoom. The S20 Ultra is now topping that with its 100X Space Zoom, making it the first smartphone to do so.

You'll get 4X optical zoom on the S20 Ultra, and up to 10X "Hybrid Optic Zoom", which is still apparently lossless, according to Samsung. Beyond that point, things start to become more and more unforgiving as the slightest movements of your hand make it difficult to frame your subject and get it a clear shot. I was able to get some useable shots at up to 30X zoom though, but anything beyond that is a hit-and-miss.

Then there's the 108MP shooter, which uses Samsung's ISOCELL Bright HM1 sensor. A variant of this sensor is used in Xiaomi's Mi Note 10 phones, so Samsung isn't the first to trot out such a high resolution sensor. But while this is the main camera sensor, the S20 Ultra doesn't shoot at 108MP all the time. For one, these photos would be a lot bigger than usual and take up a lot of storage space. Another reason is the tiny 0.8µm pixels, which can collect less light and could possibly end up introducing more noise to the picture, which would then just obscure all the extra detail collected by having so many of them.

Samsung's sensor attempts to circumvent this problem with a process called pixel binning, and its default mode is to actually shoot 12MP photos. This involves combining 3x3 grids of nine pixels into a single big 2.4µm pixel, which is in turn bigger than those in many other smartphones. This is an evolution of Samsung's Tetracell technology, which turned four pixels into one big one. Samsung now refers to this as nona-binning, and the resulting larger pixels can capture more light more improved clarity.

But in well-lit conditions, you can switch to the 108MP mode if you want that extra detail. Obviously, few of us require such detailed photos, but the idea is that you'll be able to crop these pictures and, well, make photos from photos without reducing the picture quality. In these cases, Samsung applies some re-mosaic tech that rearranges the colour pixels to bring out even more detail. The re-mosaic algorithm remaps pixels into a conventional RGB pattern, which Samsung says produces more detailed images in bright lighting.

This offers you a nice bit of flexibility, where you can take regular 12MP pictures while still getting the option to scale up to 108MP when you need it.

Finally, Samsung is really leaning into software features to bolster its camera as well. A new addition called Single Take can throw up suggestions for photos and videos you take. It's pretty nifty actually, especially when applied to video, as the software will pick out objects that might possibly make a good picture, apply filters to it, and also create boomerang videos. Samsung says it can make up to 14 such suggestions, comprising 10 pictures and four videos, all snapped at one go. The main idea is that you don't have to choose what mode or filters to use, or if you should shoot a video or a still shot. Ultimately, Single Take removes the guesswork from capturing special moments so you don't miss them.

To use it, you just switch to the Single Take tab while in the camera app and pan the camera around. It's been a little hit-and-miss for me, but I could see it being a fun party trick. You never know when it might capture something good. It can also apparently recognise cats, because when I pointed it at the furry brown critter above, text popped up informing me that it was "capturing cat pics and clips".