Note: This review was first published on 11 October 2022. 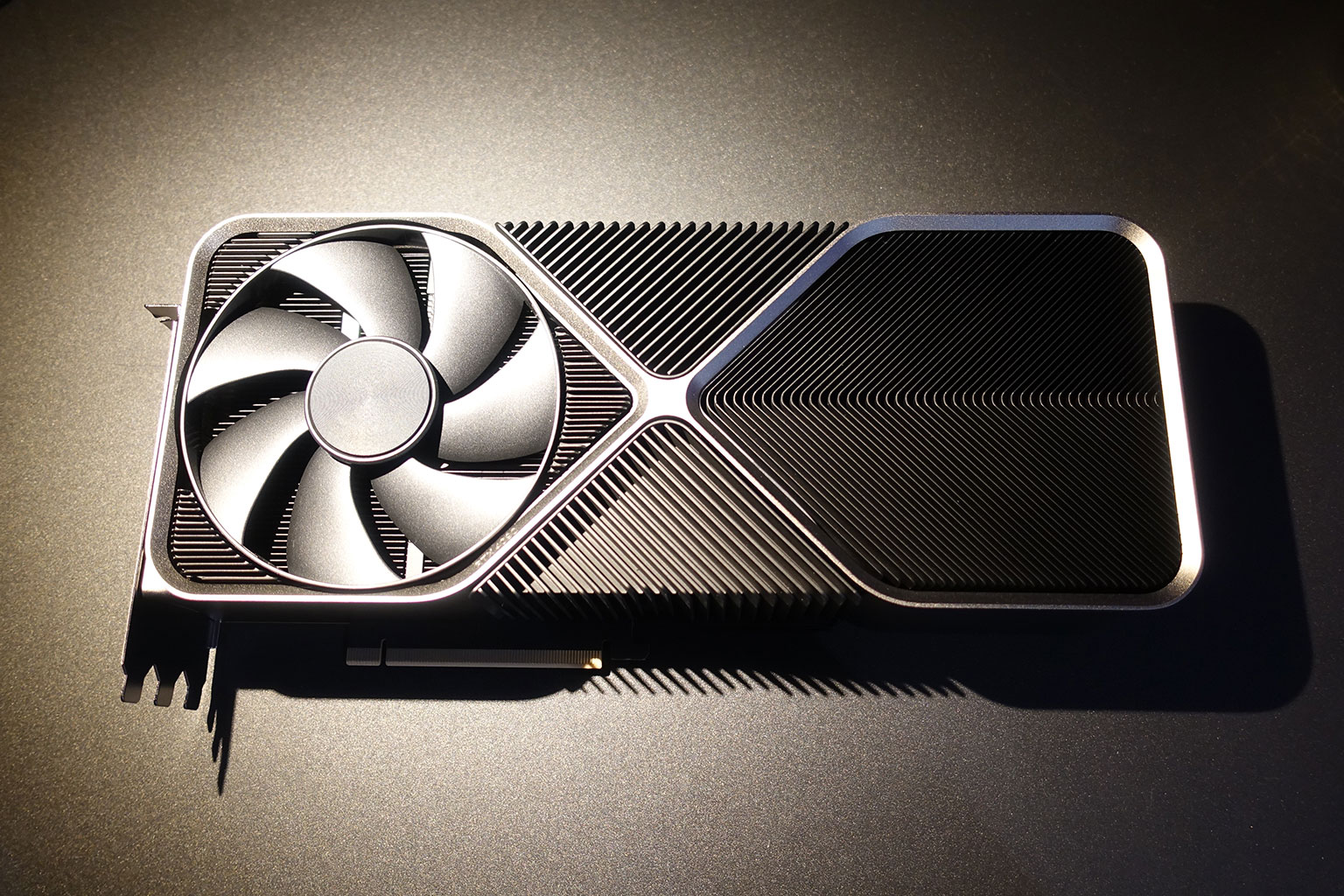 NVIDIA has been swarming us with details about its latest and greatest graphics card, the GeForce RTX 4090 Founders Edition (FE), for a while now. We now know the full specifications as well as the initial line-up of cards at launch; we know what makes the Ada Lovelace GPU powering it, well, so powerful; and we also have seen how large the RTX 4090 FE card is.

Well, over the past week we have been running quite a lot of benchmarks and tests on the RTX 4090 FE and we can now finally reveal the card’s – and its GPU class – potential and power. So I will jump straight to our performance review.

If you have not read our NVIDIA GeForce 40 series primers above, then you really ought to do so before reading on.

Spoiler: NVIDIA was not kidding when they claimed the RTX 4090 to be almost twice as fast as the RTX 3090 Ti.

Our graphics card test rig comes with the following specifications:

In case you’re wondering how the RTX 4090 will fare with AMD’s flagship Ryzen 9 7950X and Intel’s incoming Core i9-13900K, well you will just have to wait for a bit longer as I get through another round of benchmarks with those. In the interest of time, I had to stick with our tried and tested rig as above – with consideration that I also updated our RTX 30 series of Founders Editions cards for some of the benchmarks below and were then compared with the RTX 4090 FE. These include:

The Gigabyte’s card is arguably the oddest of the lot, but no Founders Edition of the 3090 Ti were sent to us. So, we’ll stick with that card as a gauge of how a 3090 Ti GPU fares against the RTX 4090.

Let’s look at the specifications of the RTX 4090 FE versus the rest of the flagship RTX 30 series cards:

The following synthetic benchmark and games were run, with the games chosen from a wide range of genres to give a better indication of performance across different segments:

We have even added Cyberpunk 2077, Microsoft Flight Simulator and F1 22 to benchmark the RTX 4090’s DLSS 3.0 performance. 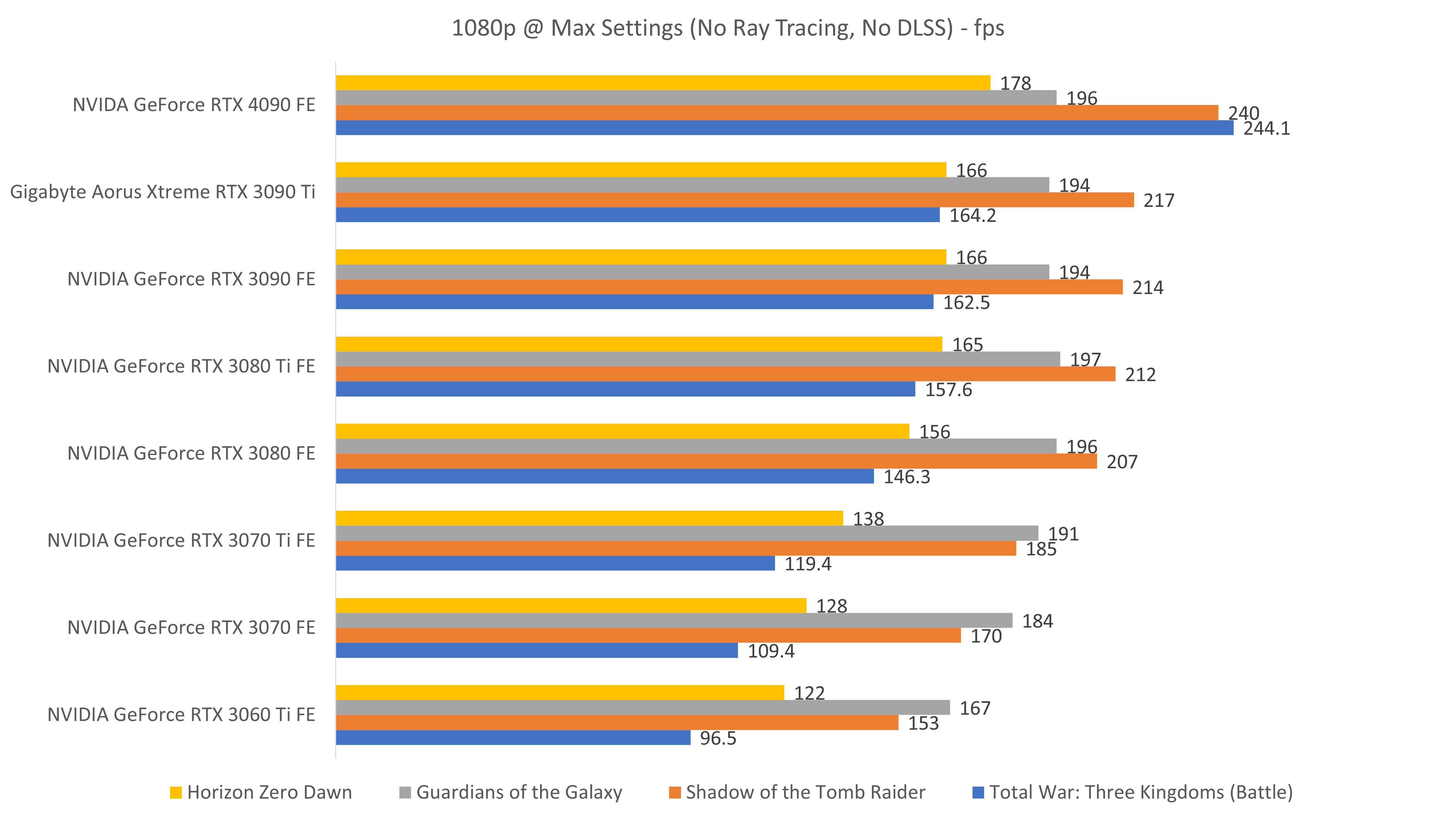 Unsurprisingly, the GeForce RTX 4090 trumps here. But remember, at lower resolutions like 1080p, the bottleneck lies with the CPU more than the GPU – we can observe that the performance gap between the RTX 4090 and the rest of the cards aren’t that wide. Essentially, if you are sticking with 1080p gaming, there’s absolutely no reason to waste your money on any cards that are above the RTX 3070, in my opinion. 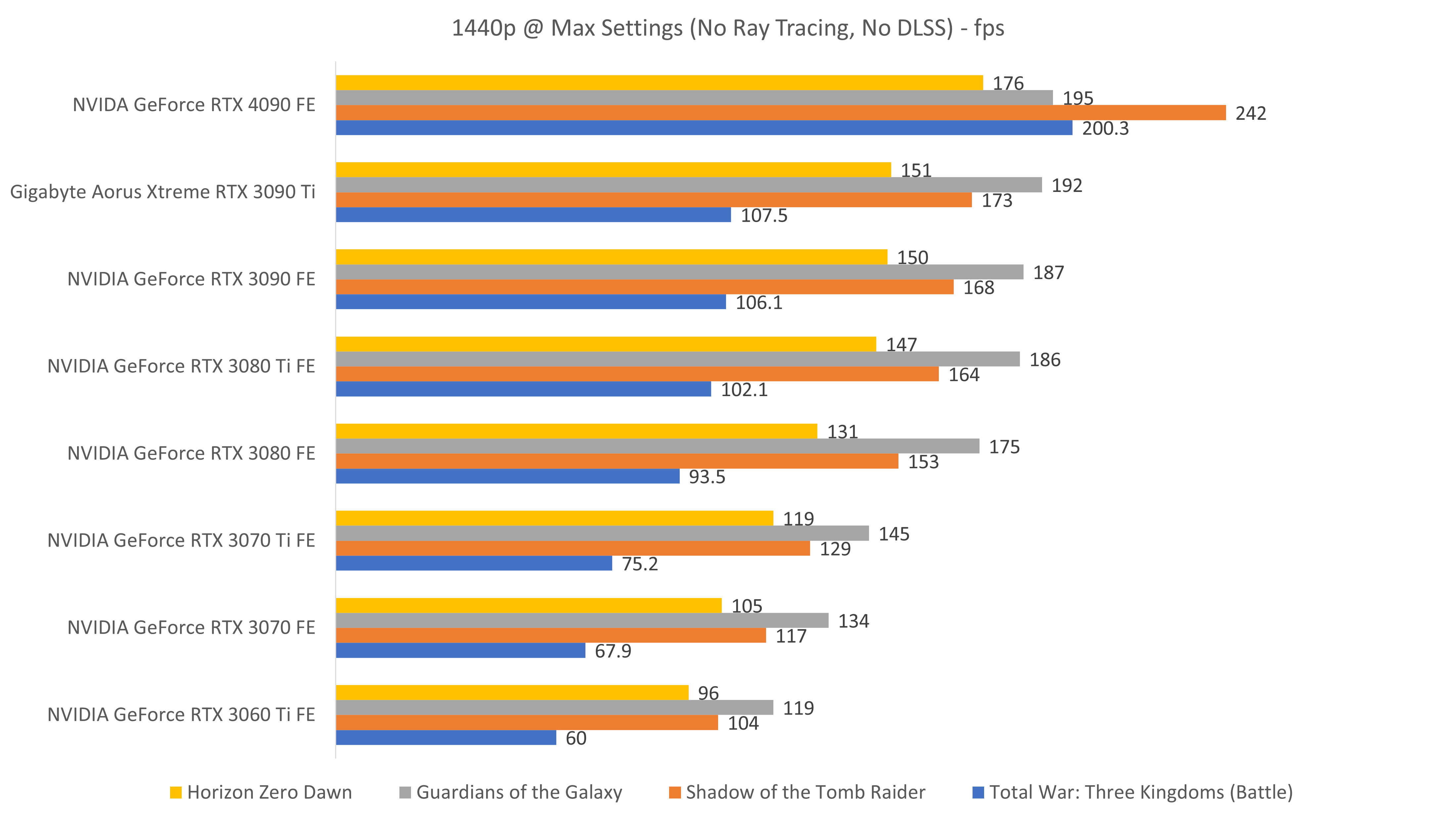 At 1440p, frame rates are more dependent on the GPU’s power and we can see gaps widening between each cards. It’s worth noting that Total War: Three Kingdom is a notoriously GPU-intensive game and the RTX 4090 has almost double the performance over the RTX 3090 Ti. 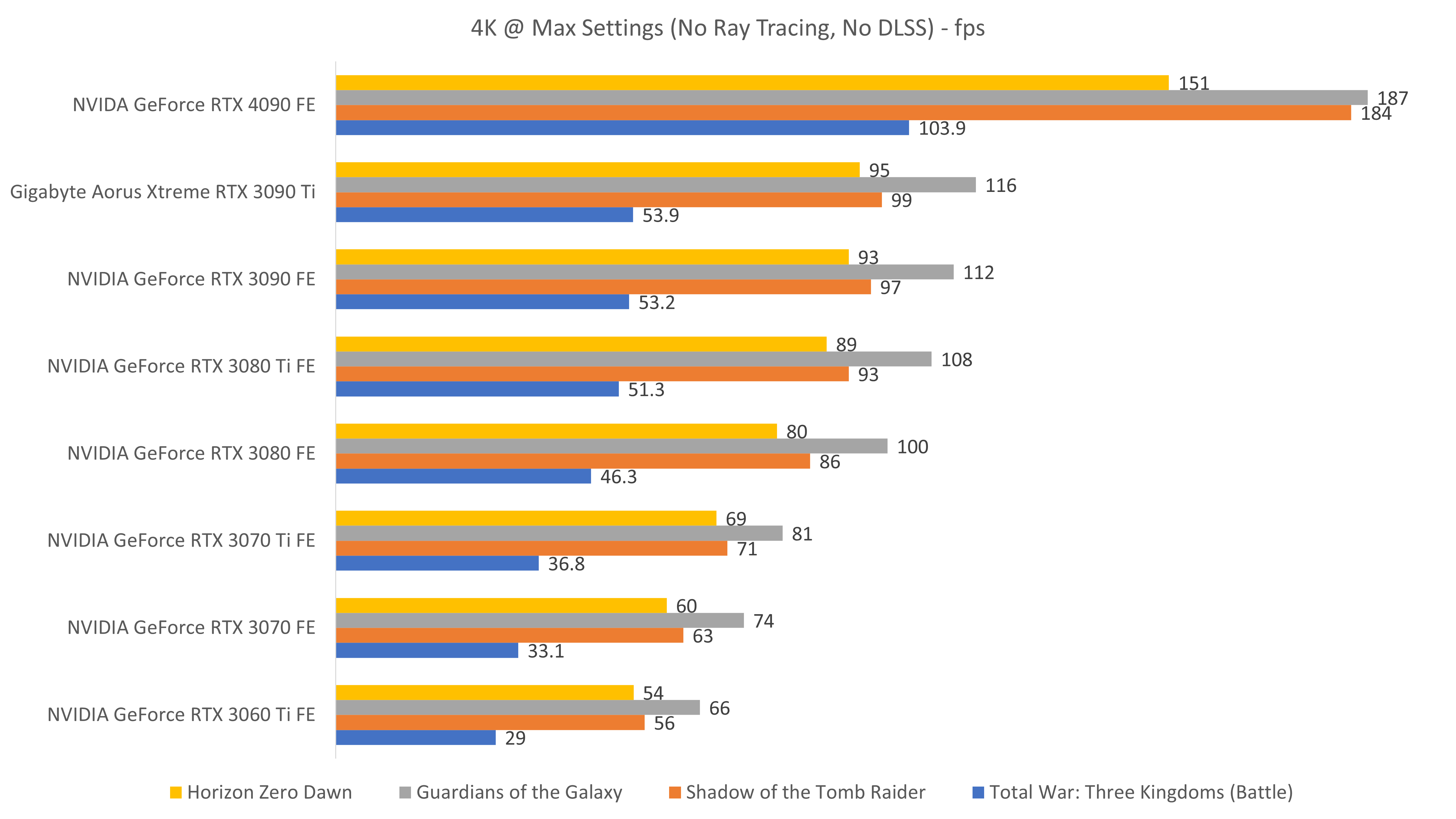 The RTX 4090 is a true 4K gaming GPU. Even with graphics settings set to maximum, the card still easily bested the second fastest card by a wide, wide margin. It’s very impressive what NVIDIA has done here. 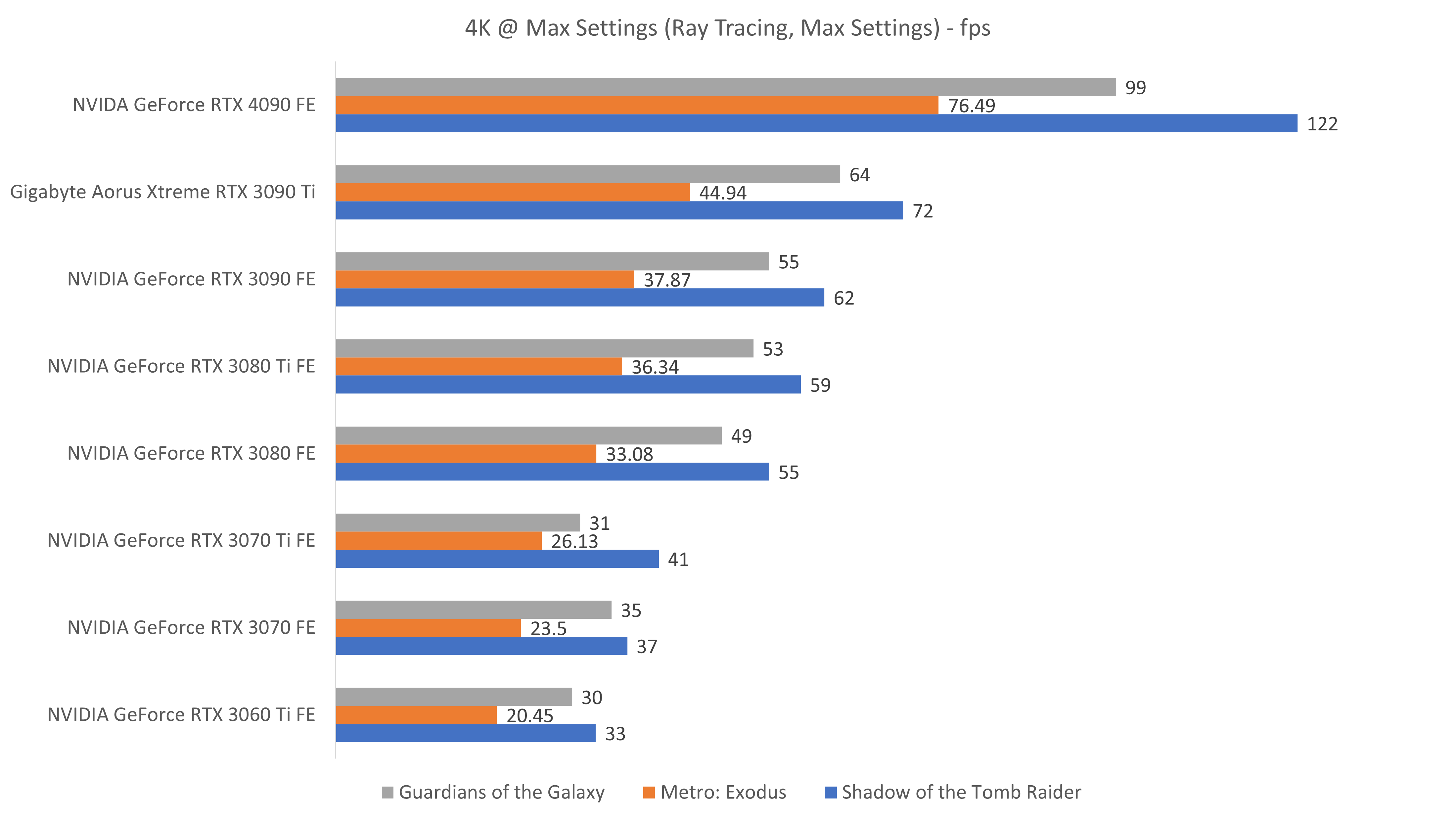 Ray tracing will kill most cards when running it at 4K. Well, but then we can see that the RTX 4090 isn’t quite like RTX cards from yesteryears. It’s the first time I’ve ever seen a card that could run Metro: Exodus at this setting beyond 60fps. There are other newer, and more graphics-intensive games, of course, that could even slow the RTX 4090 down to a crawl with ray tracing turned on.

But here’s where DLSS 3.0 comes in – it’s a huge upgrade over the previous-generation DLSS 2.0, which was already impressive. 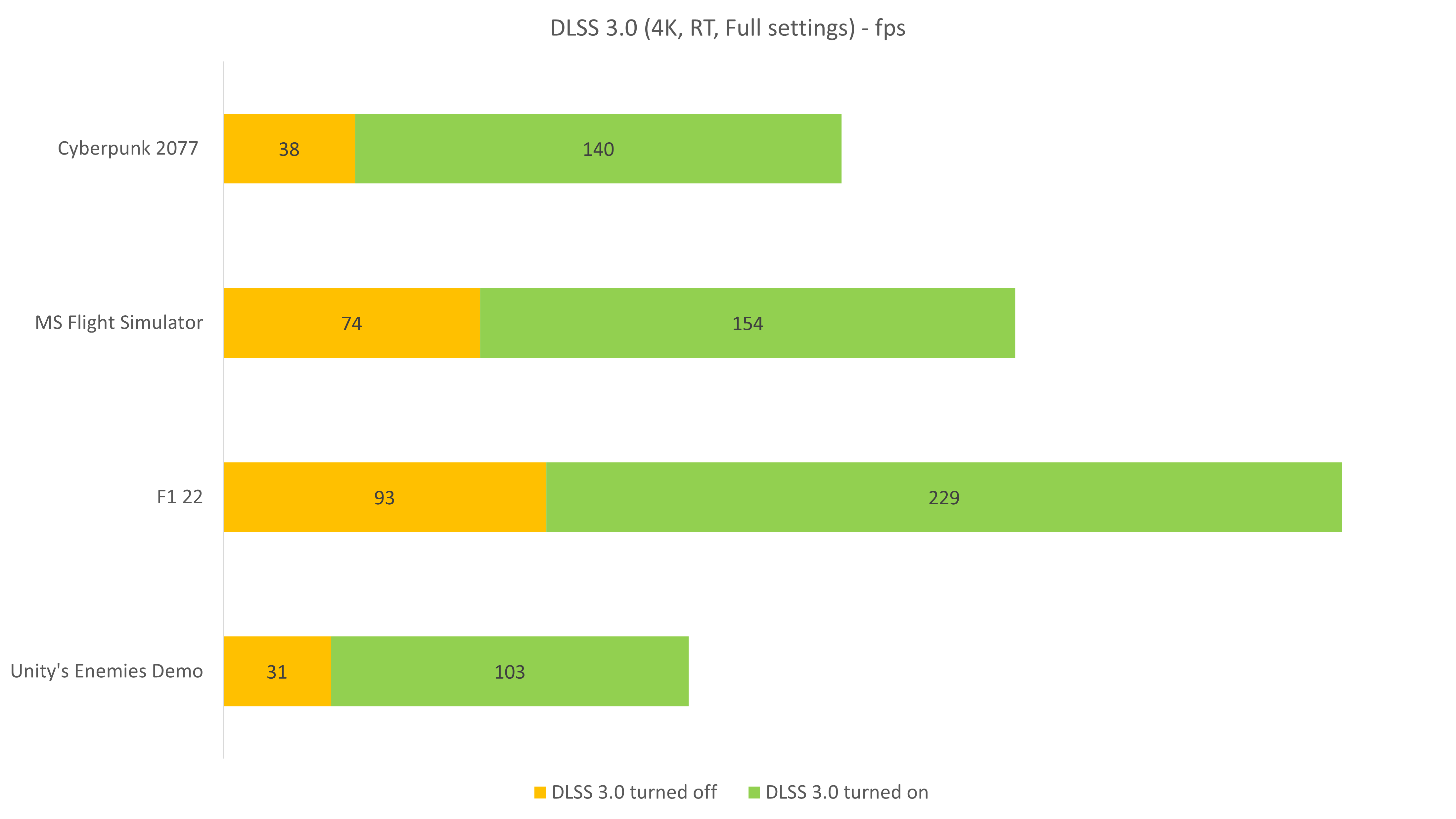 The problem with turning on ray tracing in games that support the feature is the performance hit, especially at higher resolutions. And as you can see above, Cyberpunk 2077 and even Unity’s Enemies Demo are quite brutal with 4K at maximum settings for ray tracing. But the performance uplift with DLSS 3.0 switched on is quite jaw-dropping, to say the least. 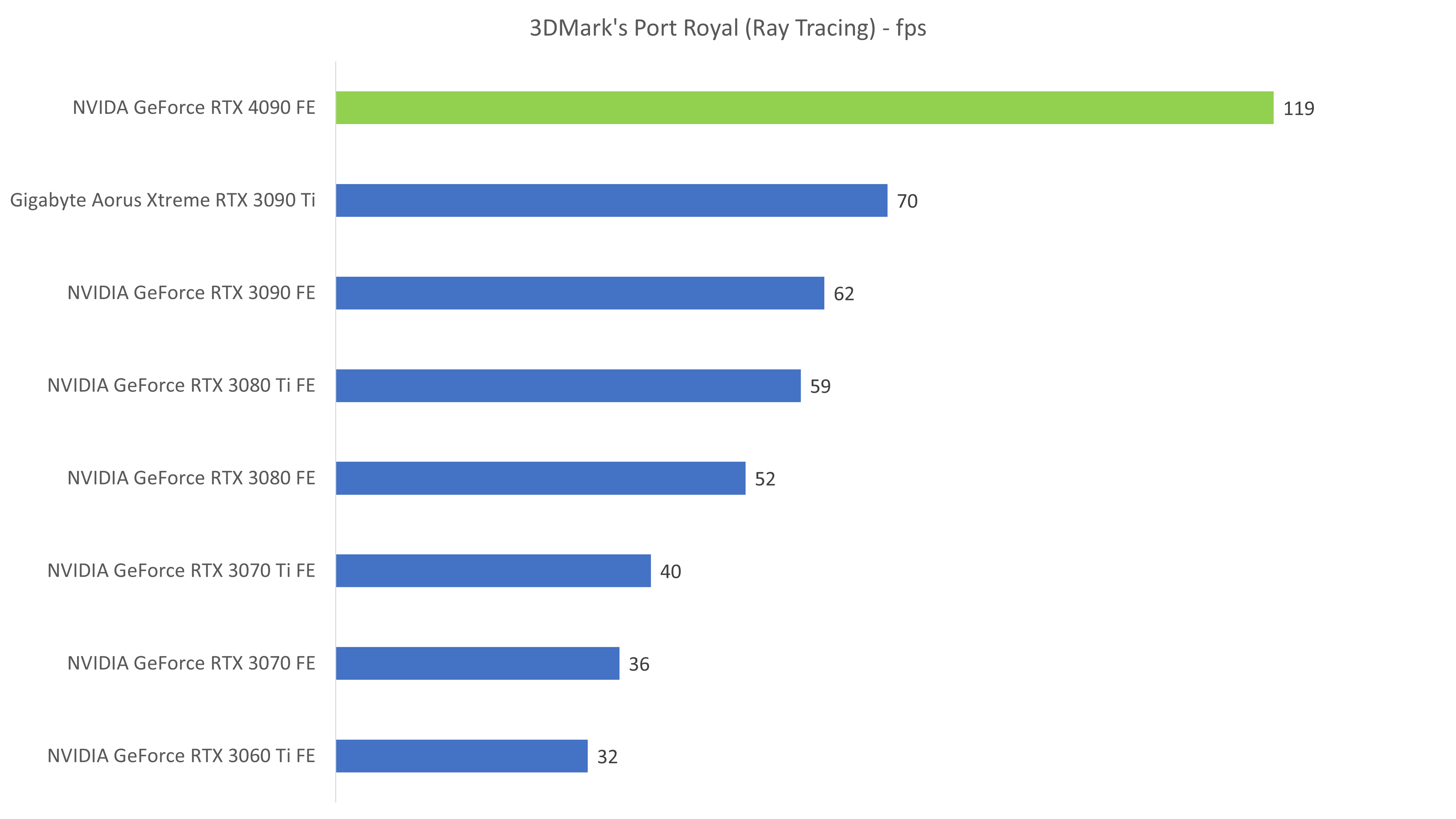 While DLSS 3.0 is only available on RTX 40 series cards, these same cards can run games that support DLSS 2.0 just fine too. Here’s a look at how the RTX 4090 fares when compared to the RTX 30 series card in 3Dmark’s ray tracing benchmark, Port Royal. 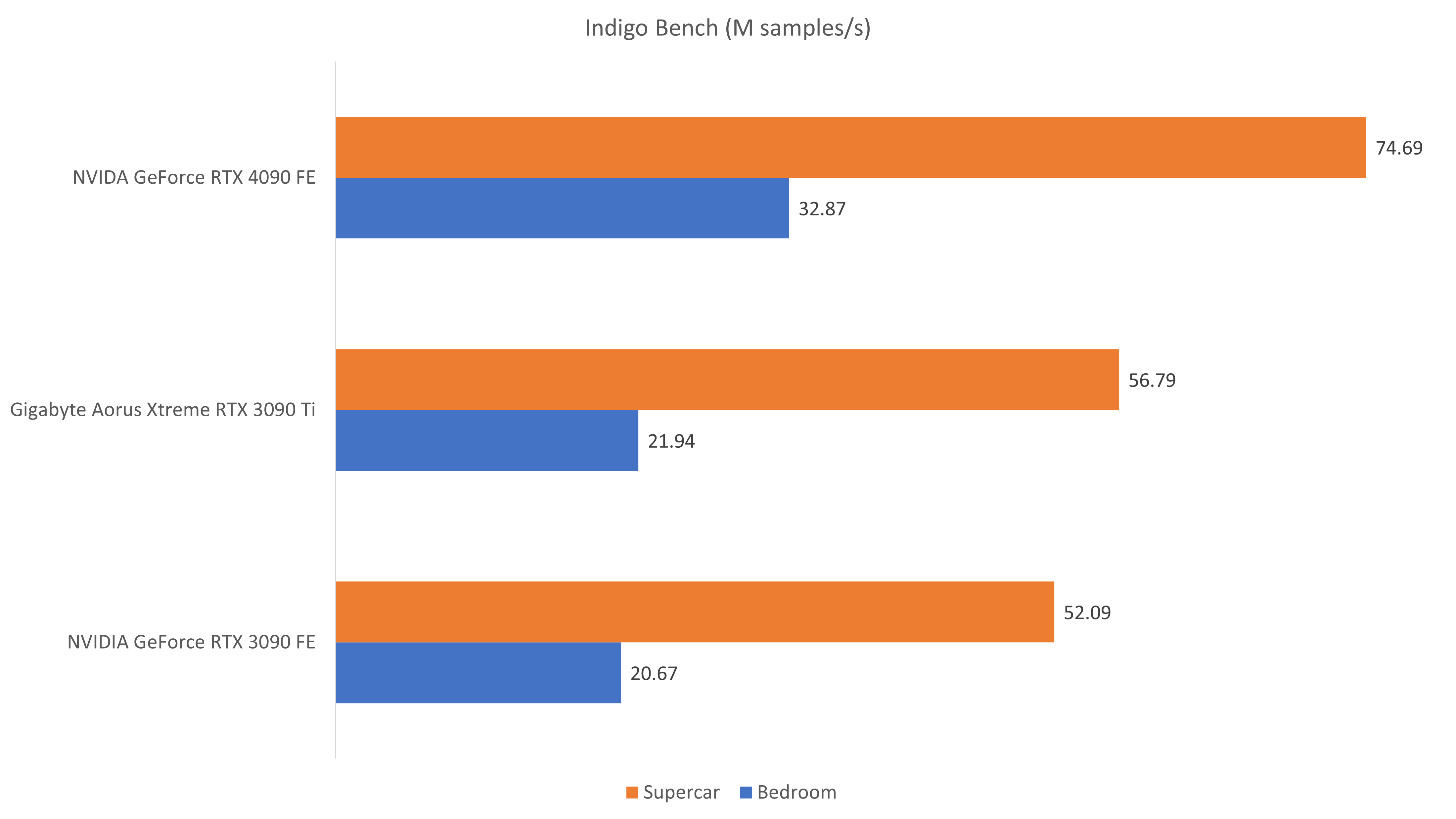 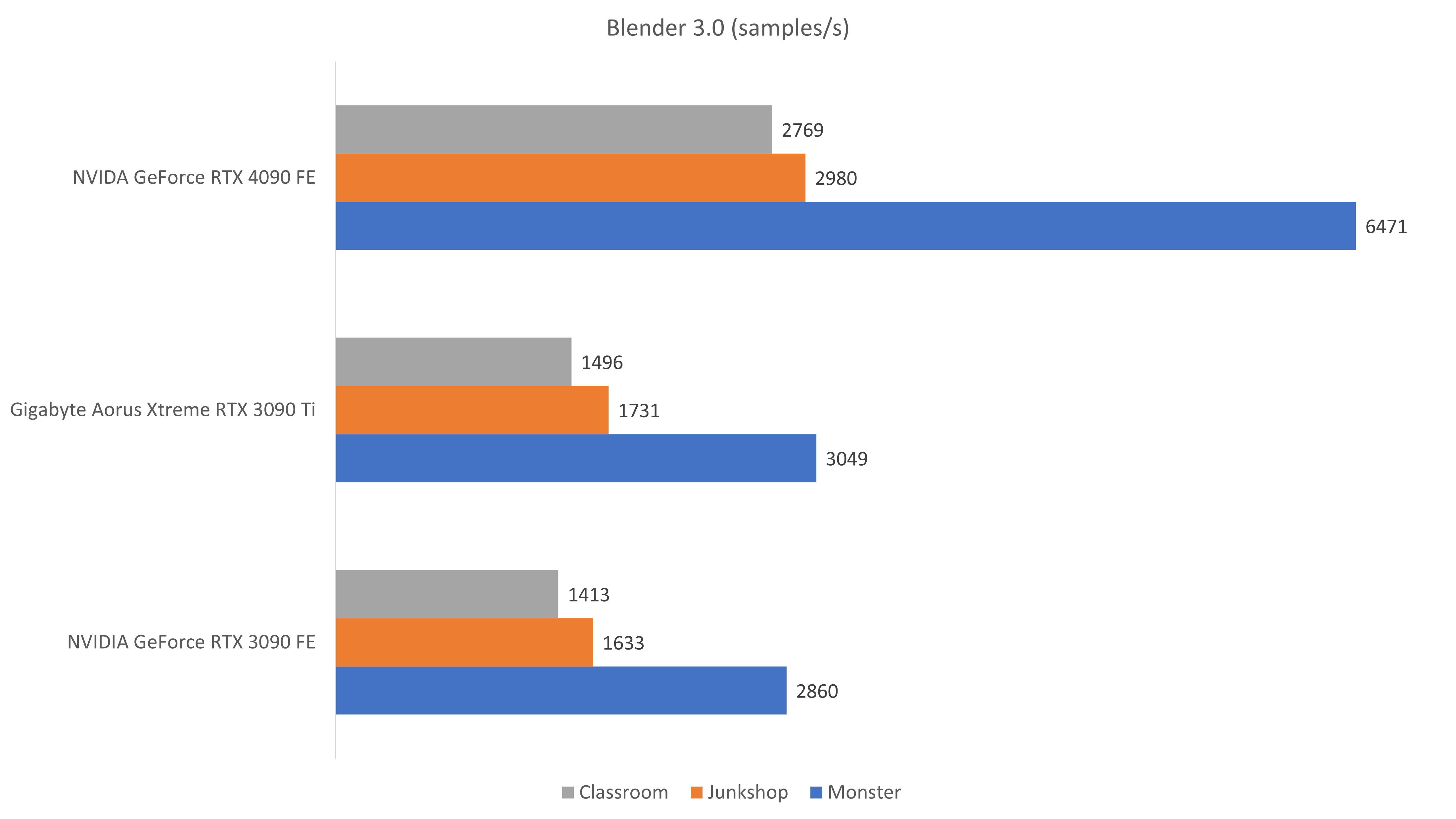 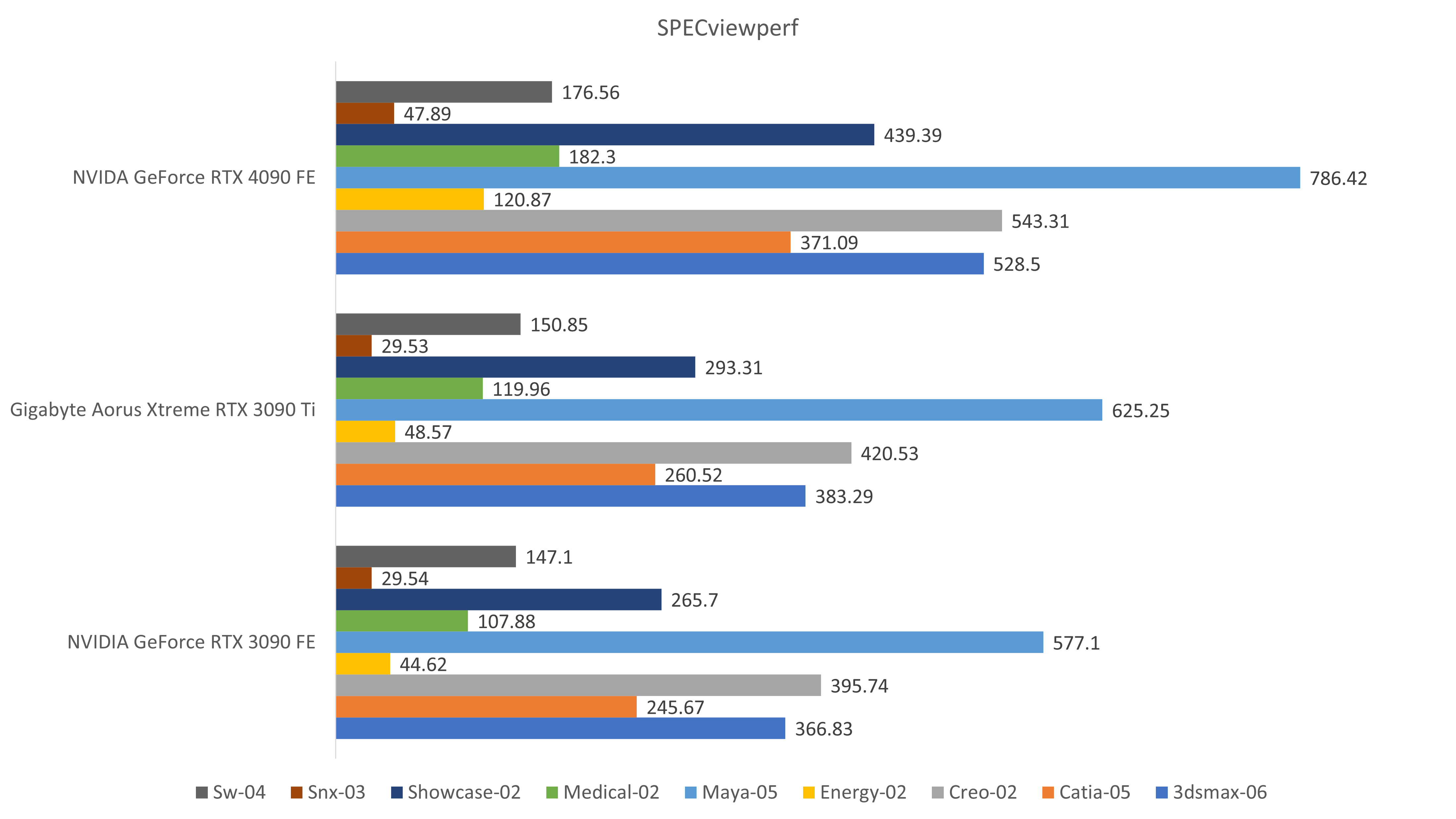 The RTX 4090 might have been flagged as a high-end PC gaming graphics card, but it’s more than that. For content creators and editors – such as streamers, video editors and even 3D artists – the GPU also offers the same generational leap in performance over the RTX 3090 and RTX 3090 Ti. 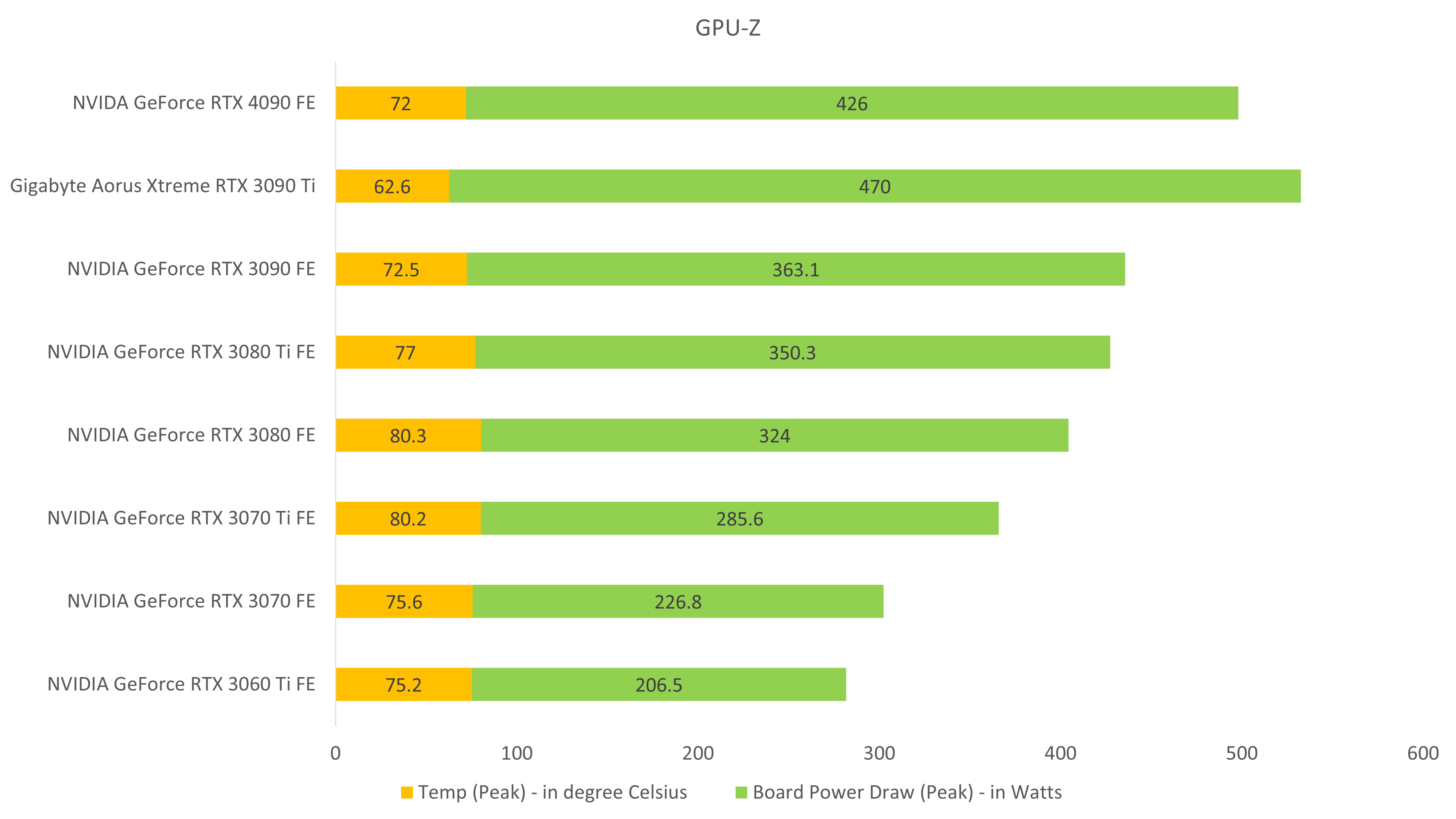 The RTX 4090 has gotten a lot of fuss about its power draw and temperature, and for right reasons too. NVIDIA has recommended a minimum 850W PSU and chances are many of you who are looking to upgrade to the RTX 4090 will ultimately have to fork out cash for a 1000W or 1200W PSU – especially if you are going to pair it with an AMD Ryzen 7000 series or Intel 12th/13th Gen flagship processor.

Let’s take a look at the temperature and power chart above – taken while running 3DMark’s Extreme Stress Test for 20 loops. A couple of facts to consider first: The Gigabyte’s RTX 3090 Ti also has to power its own AIO cooler and fans, and AIB partners’ RTX 4090 cards will undoubtedly run at higher power than the Founders Edition.

Yet, it’s very interesting to see the RTX 4090 FE running at a higher performance but with a much lower board power draw. 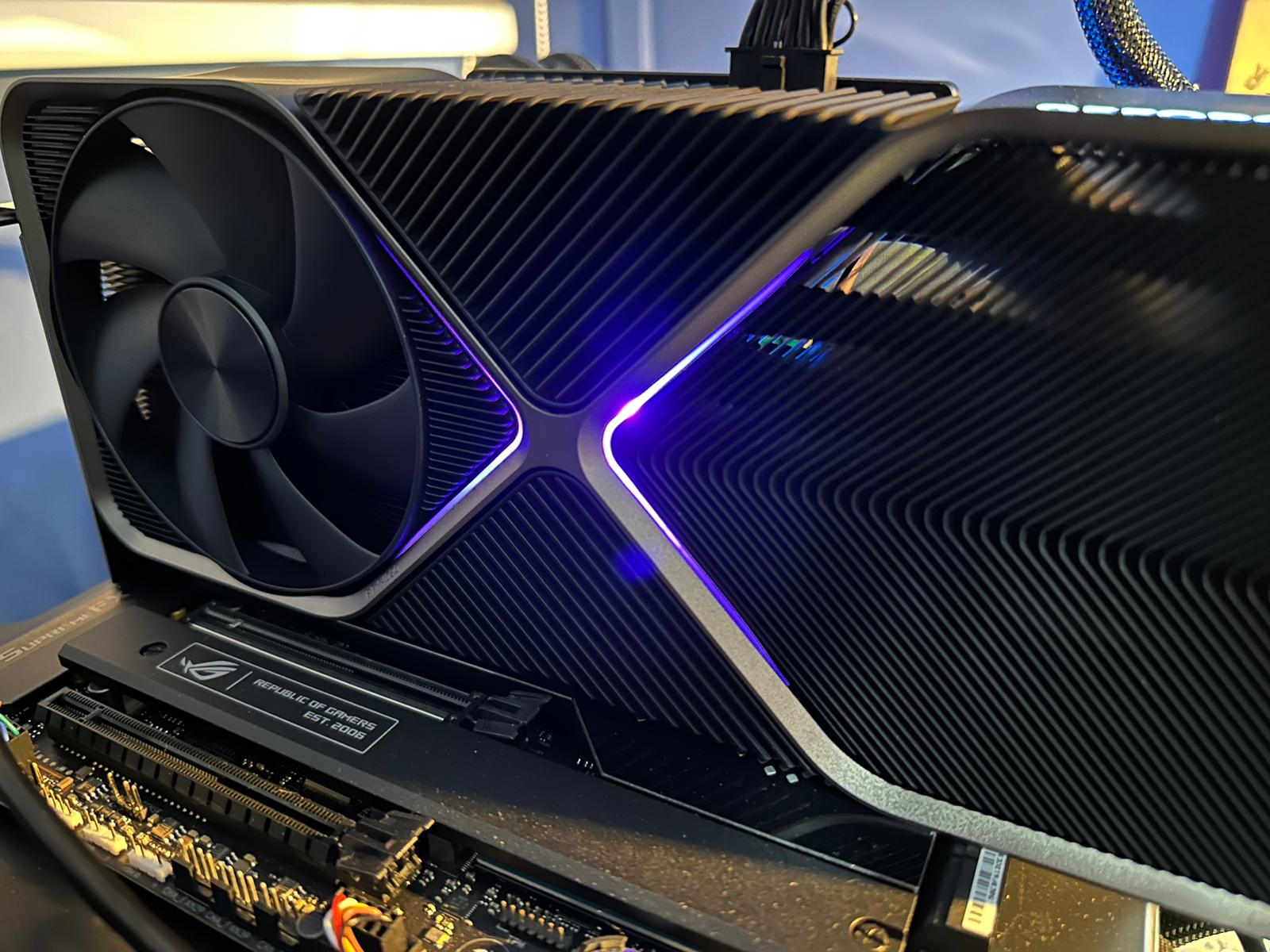 If you have been waiting to upgrade any of your existing RTX 30 series cards – yes, even the RTX 3090 Ti (which only offers a trickle performance gain over the vanilla RTX 3090), the GeForce RTX 4090, Founders Edition or AIB partners' cards, is the one that will be coveted by many. The GPU does not just offer a generational leap in performance, but also for the first time since NVIDIA touted ray tracing with the RTX 20 series way back in 2018, the RTX 4090 can finally offer gamers and content creators 4K gaming with uncompromised ray tracing performance.

The GeForce RTX 4090 is easy to recommend, but only if you have at least S$2,500 to spend on the best graphics card available today. It's easy to justify the worth of the RTX 4090 with our benchmark results above, but no matter how you sugarcoat it, that's A LOT of money – and worth more than many full gaming PCs cost these days.

Another crucial note is we are still not seeing the full picture of the next generation of cards yet. There's still the RTX 4080 that NVIDIA is saying will arrive in November, and AMD's new RX 7000 GPUs are slated to be revealed in the same month too. So unless you truly have the need or just want an exceptional card, the best option is to play the waiting game (pun intended) first.

But I'll be damn, the GeForce RTX 4090 is one truly exceptional card.

Write a Review
Compare This | Specifications
Exceptional generational performance gains
Uncompromised ray tracing performance
Solid and classy design
The card for gamers and content creators
Unlikely to see the same scarcity as last generation
Hey, RGB!
Not sugarcoating it - it's expensive
You are likely going to need a new PSU
Your electrical bills are going to go up as well
Our articles may contain affiliate links. If you buy through these links, we may earn a small commission.
Sponsored Links