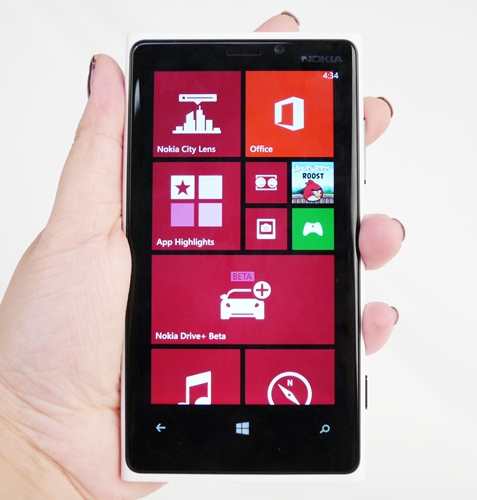 The Nokia Lumia 920 comes nearly a year after its predecessor Lumia 800 marked the start of the Finnish company and tech giant, Microsoft's renewed smartphone vows. Now coupled with the brand-new Windows Phone 8 OS and its PureView technology (and some unfortunate marketing hiccups), the flagship device sets out to be the definitive WP8 smartphone to have this Christmas. Not only that, the Lumia 920 comes with a top-notch Pure Motion HD+ IPS display and integrated wireless charging. All in all, the 920 will pose quite the challenge to the other Windows Phone 8 devices, including HTC's flagship Windows Phone 8X by HTC and Samsung's Ativ S.

Hardware aside, Nokia did the job pretty well with the 920's exterior, with many online clamoring to get their hands on the rather sleek polycarbonate-clad unibody smartphone. Can Nokia's latest and brightest star be a game changer while maintaining prime position in the sphere of WP8 devices? Will its shiny innards and exterior pry those away from the Android and iOS camp? First, let's take a quick look at how it compares across the upcoming WP8 artillery.

If the Lumia 920 looks downright familiar, well, it sure is. You have seen the iconic unibody design on Nokia's first and only MeeGo device, the N9, and then later on the Lumia 800. However, that does not in any way play down the beauty of the Lumia 920 - it is unique and classy-looking enough to hold its own fort in a sea of cut-and-dried devices. There are some changes to its design of course due to the its bigger 4.5-inch screen but otherwise, it looks very much like a longer, wider but thinner version of its predecessors. 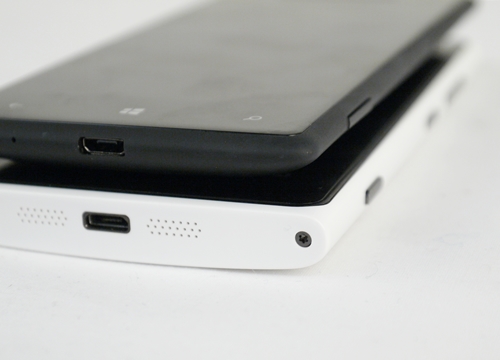 Given the fact that manufacturers are flocking to lighter and thinner smartphones, the girth and heft of the Lumia 920 is an oddity. With its rather angular build and 185g, it certainly towers over the rest of the Android and iOS devices in the market right now. As a point of reference, smartphones these days come with an average of 130 to 140g. Is it a Windows Phone 8 specific trait then? Nah, given that the other WP8 devices listed above still remain within the 130g range. We partially attribute the extra weight to the integrated wireless "Qi" charging component - these things take up space but in all things considered, is a small price to pay for extra innovation.

On the flip side, the device is extremely sturdy and well-constructed, giving us the impression that it will be more impervious to knocks and hits. Man-handling the phone lends a positive experience despite its girth, due in part to a tapered and slightly curved back that allows the device to sit cozily in our hands. One-handed operation is most certainly possible, if you come equipped with regular-sized or larger hands. 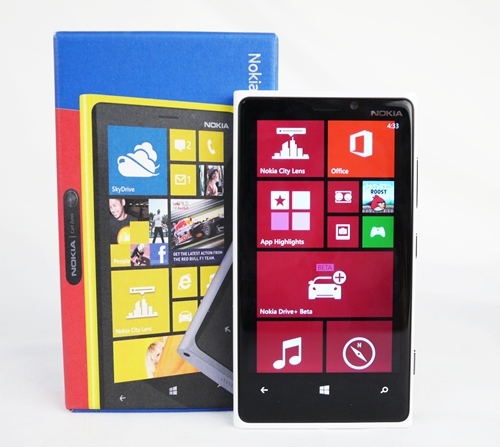 The Lumia 920 comes in a variety of colors beyond the usual monochrome shades, including a rather dashing shade of canary yellow, red and grey. What we had on hand is the white variant that comes with a glossy finish, which is unfortunately a major fingerprint magnet. The other shades will equally be as smudged as the former without a cover and if that's a big issue for you, our advice would be to go for the one with a black matte finish. 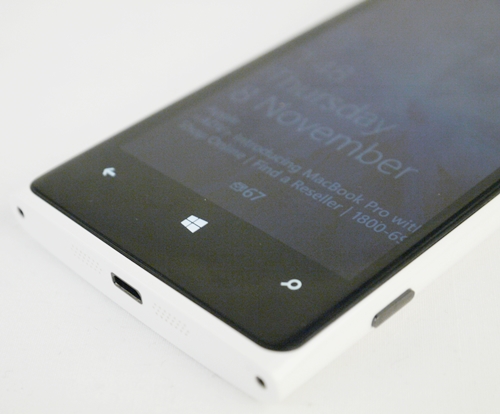 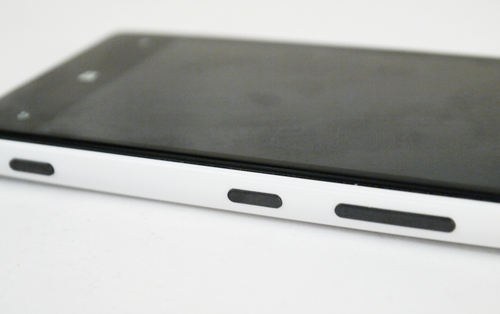 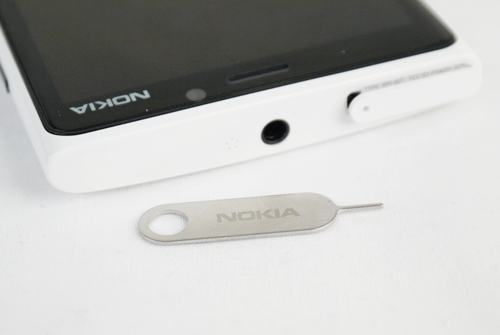 Small design touches extend to the buttons on the device as well, with silver-accented touch buttons framing the front when unlit. The black hardware buttons are all aligned on the right, which includes the volume rocker, power on and camera functions, which makes for simpler operation. These ceramic (hint: better-protected) buttons are not small by industry standard and present extremely good tactile feedback. 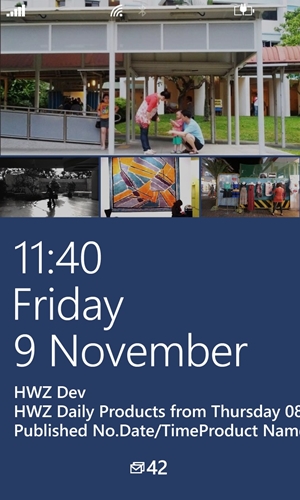 If you haven't already realized, the Nokia Lumia 920 ships with the latest Windows Phone 8 operating system. First unveiled at the Windows Phone Summit in June, we got a taste of what to expect from the new OS, including the introduction of multi-core support, NFC technology, microSD card support and new screen resolutions. However, aside from the newly-introduced Smart Screen and inclusion of the new IE10, the new software was virtually a mystery to tech pundits and publications alike. 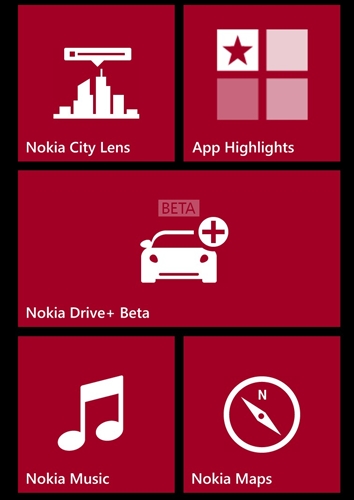 With the year closing to a close and Windows 8 unveiled for all of the world to see, the Windows Phone 8 finally made its first official appearance late last month. We will leave the final details of the OS to our article here, where we highlighted what we felt was the top eight new features on WP8. Instead, we will focus on what Nokia has to offer through its software additions like Nokia City Lens, Nokia Maps and App Highlights. Do note that some of these apps were previously available on the Lumia 800 and 900. 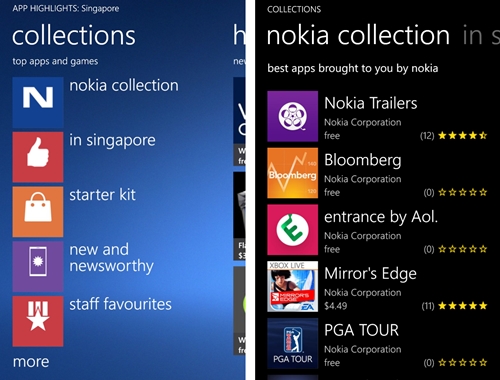 Nokia has a pretty extensive range of apps that are already downloaded on the Nokia 920. If you are looking for more, you can head Nokia's own Apps Highlights app for a couple of choice recommendation. 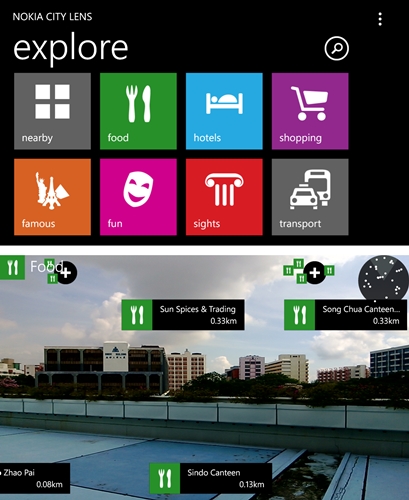 If you are looking specifically for something to do around your location, the Nokia City Lens app is probably your best bet. The app utilizes Augmented Reality to display nearby businesses and landmarks in real-time, allowing for a quick glance of possible places to drop by. It's pretty accurate in our opinion, and will prove useful in unveiling hard-to-find attractions you would have probably missed out otherwise. 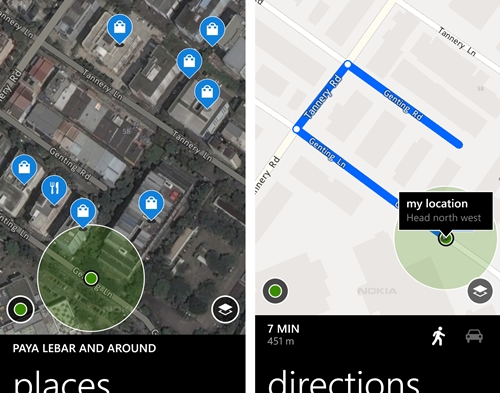 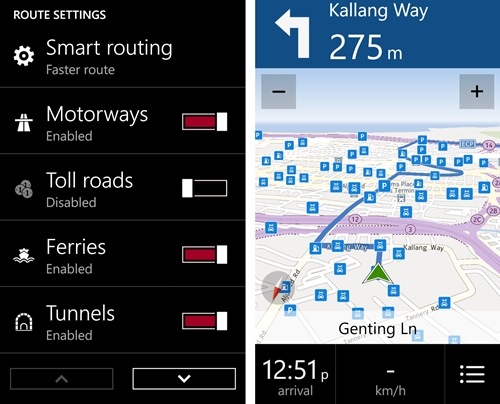 Where Apple has failed, Nokia has succeeded with its own Maps and Drive+ (Beta) apps. Nokia Maps works almost like Google Maps, allowing users to seek out popular places as well as get directions to a proposed destination. Unlike Apple's Maps application, Nokia Maps provide accurate transit and landmark information. There's the option to view in satellite version as well, if you don't find it too distracting. 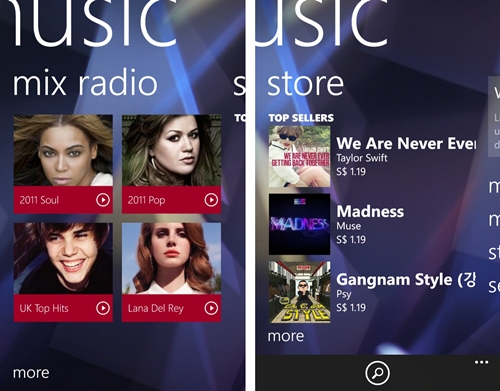 If you'd rather enjoy your music through streaming services, the Mix Radio feature within Nokia Music gives you a wide genre of songs (mainstream or otherwise). And if a particular mix catches your fancy, you can make it available offline through the Nokia Music Store - the feature is a great way to expand your collection without having to fork out a single cent. Otherwise, you can purchase specific tracks via the Nokia Music app as well. 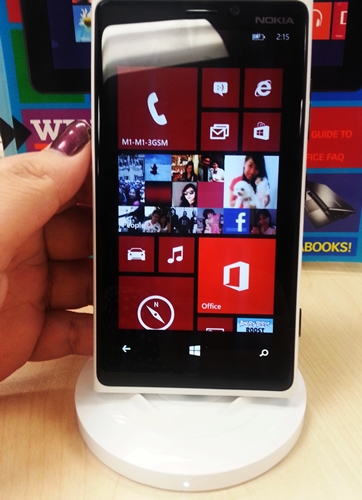 With embedded wireless charging, Nokia has taken innovation up a notch by creating a space for a suite of useful accessories. Now, we know that the technology is not necessarily new but Nokia is definitely a pioneer in terms of marketing it as a viable feature. The accessories that make use of the device's integrated Qi wireless charging capability include a wireless charging plate, Fatboy charging pillow, JBL PlayUp/PowerUp speakers, Nokia Luna Bluetooth Headset with wireless charging and more (prices for the mentioned products are not out yet). We managed to get our hands on the funky JBL PowerUp Wireless Charging Speaker which not only allows you to pair your device via NFC or Bluetooth to share music but also charge your Lumia 920 or 820. Check it in action in the video below: 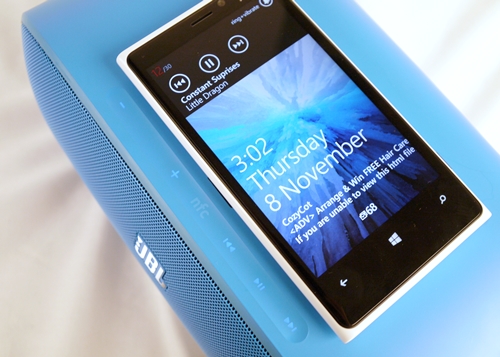 We shall expect the choices to grow in numbers once the phone has gotten enough traction, but these products will definitely be a plus point for people who are looking to detract from the usual Android and iOS devices. To add on, we applaud Nokia's efforts in adding more value to the phone with its variety of functional apps, in which the WP8 platform sorely needs to chase up with its iOS and Android counterparts. Aside that, the Windows Phone 8 is an acquired taste - while everything feels smooth and buttery, it takes time getting used to a rather radically different UI. If you find yourself frustrated with the Windows Phone 7/7.5 platform and its somewhat confusing interface, you are likely to feel the same way on the Windows Phone 8. While there's certainly order within the operating system, it's not quite the same as what you're traditionally used to - hence the confusion. Just like Windows 8, the Windows Phone operating system is hoping to intrigue and entice users open to change and differentiate itself from the competition.