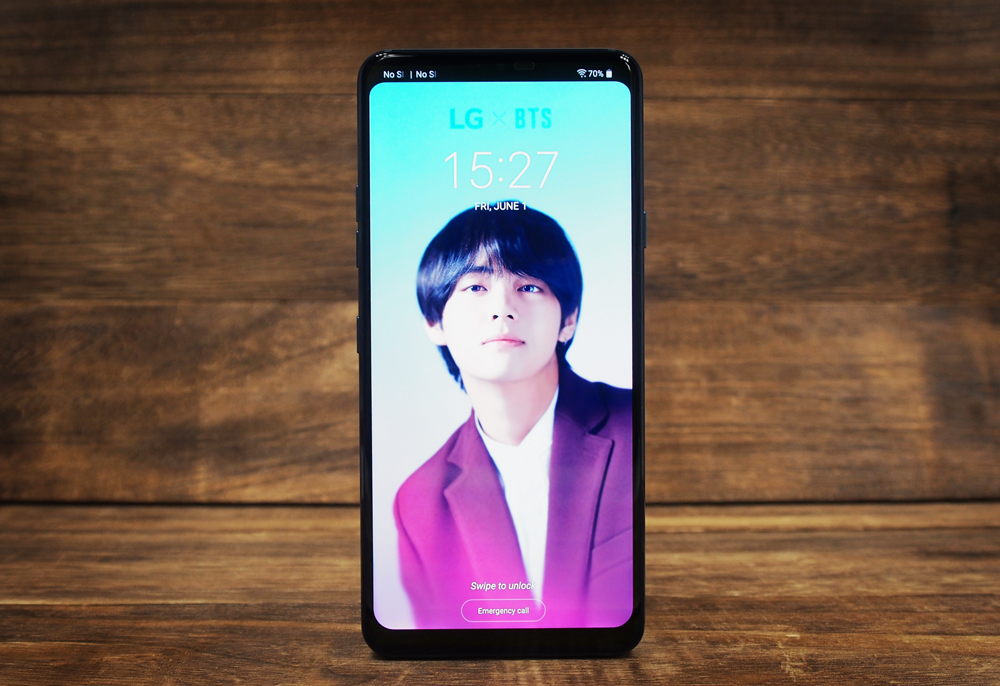 In years past, LG has been experimenting with some oddball features that didn't always work out. There was the curved LG G Flex, the leather-backed LG G4, and the modular LG G5. Last year, LG ditched the gimmicky features and the result was its best phone in years, the LG G6, an attractive bezel-less smartphone with a great display, an IP68 build and a useful dual camera setup. Unfortunately, it also had an outdated year-old processor and was overshadowed by Samsung's own bezel-less Galaxy S8, which was announced just a month after the G6.

This year, LG has made sure its latest phone, the daftly-named G7+ ThinQ is armed with Qualcomm's latest Snapdragon 845 processor and has once again kept things simple, with only modest upgrades over last year's model, including a slightly larger 6.1-inch notched display, AI-enhanced cameras, and better audio which includes a louder ‘Boombox Speaker’.

But with LG's new safer approach to phone design it does mean that the G7+ doesn't have any standout unique features, like the curved Infinity Display of the Samsung Galaxy S9, the futuristic 3D TrueDepth camera on the iPhone X, or the triple-lens rear camera of the Huawei P20 Pro.

N.B. Like the V30+ the '+' in the G7+ ThinQ's name merely refers to its 128GB internal storage capacity and increased RAM at 6GB. It is otherwise identical to the standard G7 ThinQ with 64GB/4GB respectively (which isn't officially available in Singapore).

You can't escape notches this year, with everyone from ASUS to Oppo releasing iPhone X-lookalikes. Don't expect that trend to go away anytime soon either, as Google has recently announced notch support for Android P.

The notch on the G7+ is fairly small and houses the earpiece, 8-megapixel front-facing camera (an update over the 5MP camera on its predecessors), and some sensors. Below the display, there's a small chin that's about the same size as the ones on the ASUS ZenFone 5 and Samsung Galaxy S9. Once again, no Android phone today even comes close to the completely chinless look of the iPhone X.

On the back of the phone, the G7+ has an easy-to-reach fingerprint scanner that sits below the vertically oriented dual rear camera setup. Unlike every other LG device in recent memory, the fingerprint scanner doesn't click to double up as a sleep/wake/power button. Instead, LG has returned the power button to the right side of the phone. Personally, I actually prefer it here as it feels more familiar to me, but longtime LG users might take a few days to adjust. Thankfully, you can still wake the phone by tapping on the fingerprint sensor and unlock the phone thereafter, so it's not a big change. 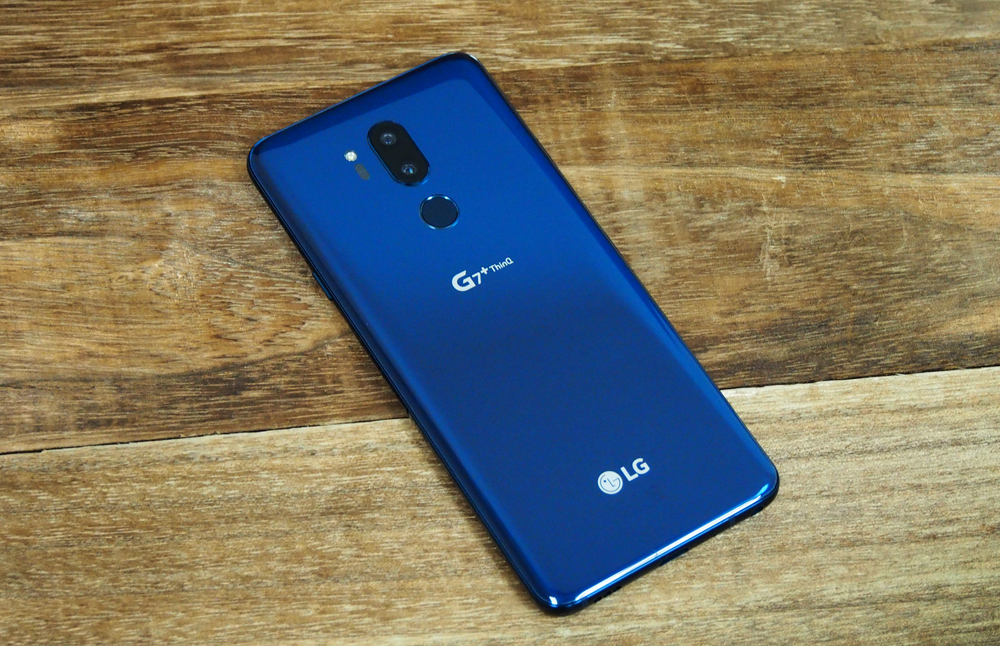 Towards the bottom of the rear there's an LG logo, and higher up there's a secondary 'G7+ ThinQ' logo that I could definitely do without - a simple G7, or preferably no secondary logo at all, would have looked much cleaner. By the way, while I get that LG is really pushing AI this year by putting its ThinQ branding on everything, could they not come up with a better name? LG says ThinQ (pronounced thin-que by the way, not Think, which would have been infinitely better) was chosen because the AI "thinks of you." Groan.

Like the G6, there are individual volume up/down buttons on the left side of the phone. There's also a new dedicated Google Assistant button here below the volume controls. It's very similar to Samsung's dedicated Bixby button, and just like the Bixby button, you unfortunately can't remap it - although you can disable it entirely. 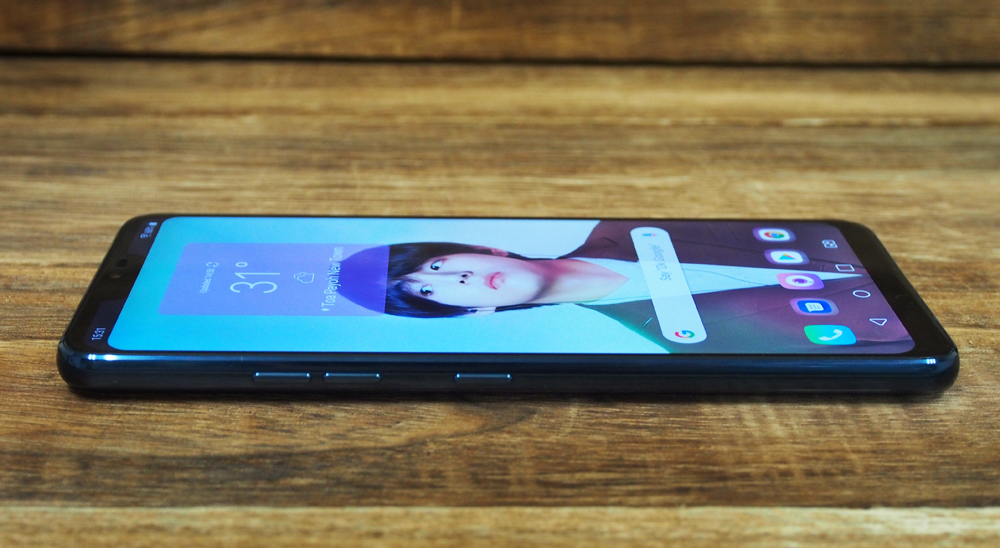 On the bottom of the phone, there's a single downward firing speaker, a USB type-C port, and a 3.5mm headphone port. 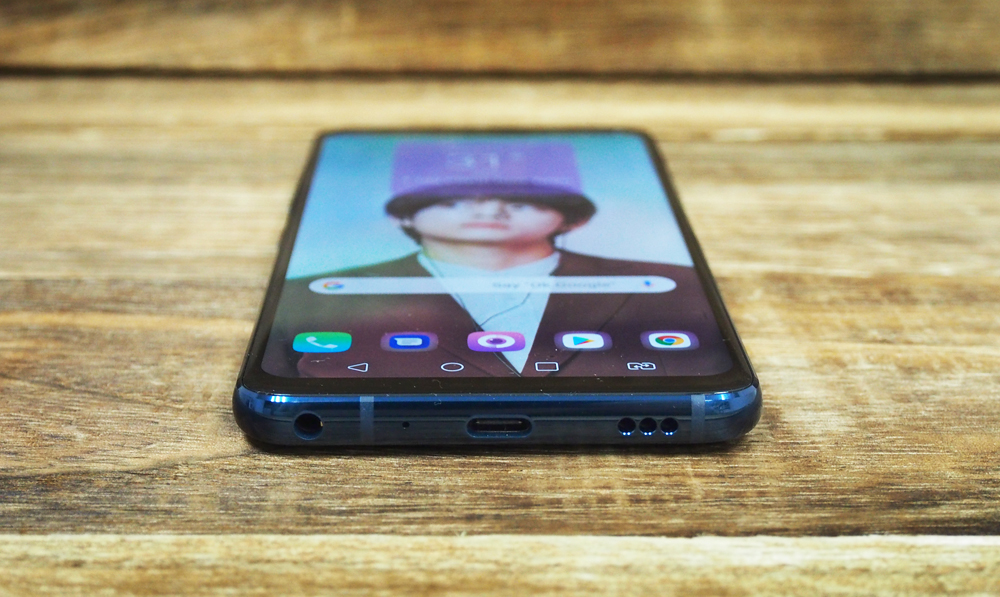 The G7+ ThinQ is available in a bunch of colors: New Moroccan Blue, New Aurora Black, New Platinum Gray, and Raspberry Rose, which unfortunately will not be launching in Singapore. 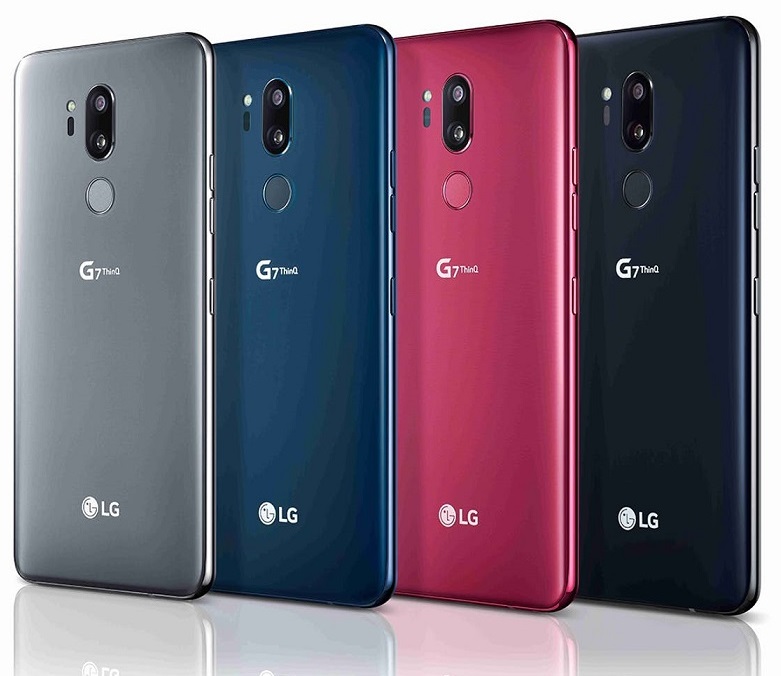 The G7's display is a 6.1-inch IPS LCD panel with a 3,120 x 1,440 pixels resolution (~564 ppi) and 19.5:9 aspect ratio. It doesn’t have the same perfect blacks and contrasts you'll find on an OLED display, but it still manages vivid colors. However, unlike last year's LG G6, the G7+ ThinQ isn't Dolby Vision HDR certified. Perhaps the loyalties weren't worth to further increase the price of the phone. Despite that, the phone does support HDR10 content, just not Dolby Vision HDR standard. By default, the screen is a little cold, but you can fix this by manually adjusting the color temperature in the settings menu. 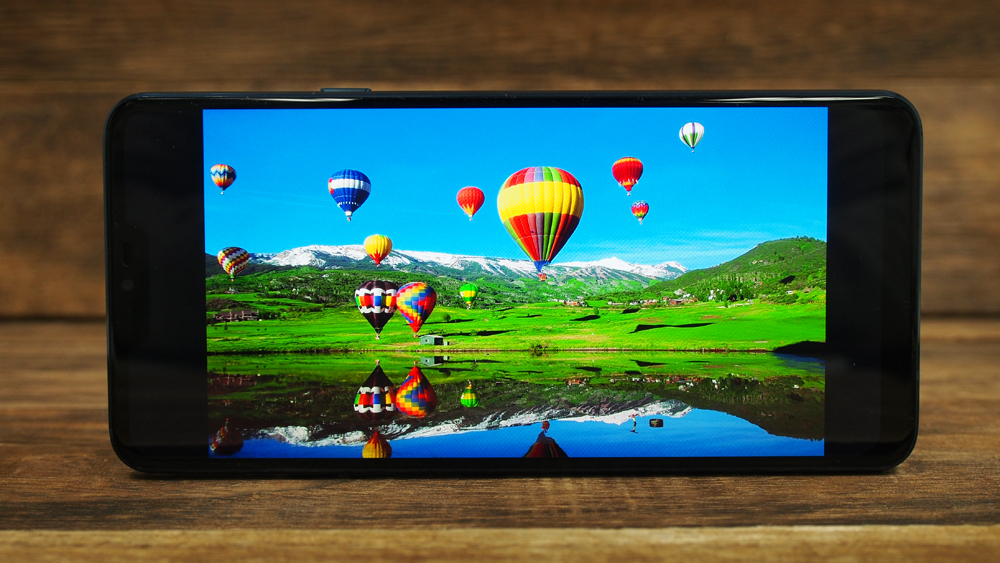 Without any standout unique features, LG has fallen back to promoting features like screen brightness for the G7+, which, let's be honest, isn't tremendously exciting. To be fair, the G7+ can get very bright - maxing out at 1,000 nits, but only when you activate the appropriately named "Super Bright Display" feature.

You do this by tapping the little 'Circle and Sun' icon to the left of the brightness bar in the Quick Settings tray. The icon probably should have been on the right side of the bar, since the slider goes from low on the left to high on the right, and the icon itself is a little confusing since it seems to show a sun behind something, and you're most likely to use this mode when the sun isn't behind something, but whatever. 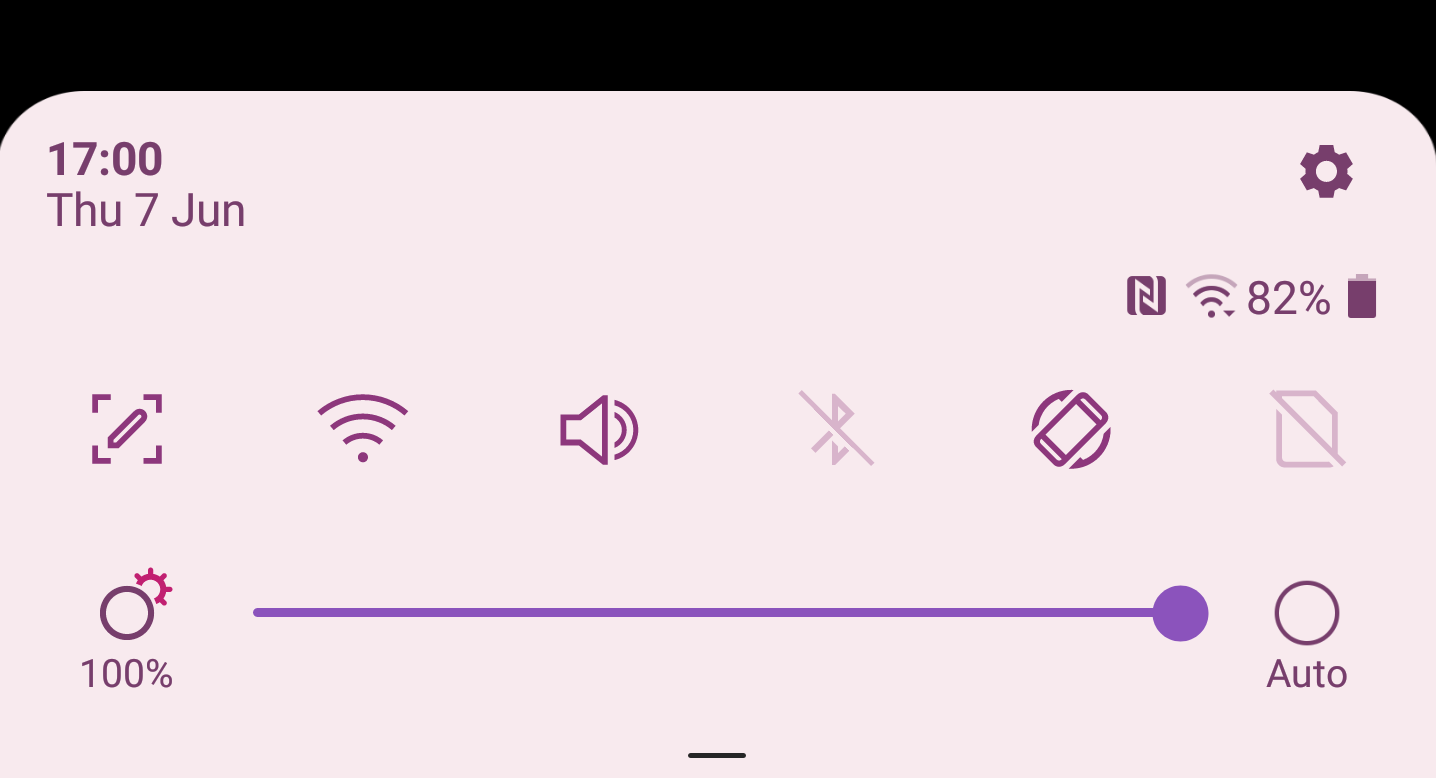 According to LG, the Super Bright Display is 30% more power efficient than the G6 was at peak brightness. Super Bright Display can be activated for three minutes at a time - the restriction is in place to preserve battery life and to avoid overheating. This is just about enough time for you to check and read any messages you might have if you're forced out into the blinding midday sun while you're walking from one place to another.

One thing to note about the display is that, for some reason, by default all videos play in an extremely boxed-in format with big black bars on all sides - this is true of both videos and apps like YouTube. 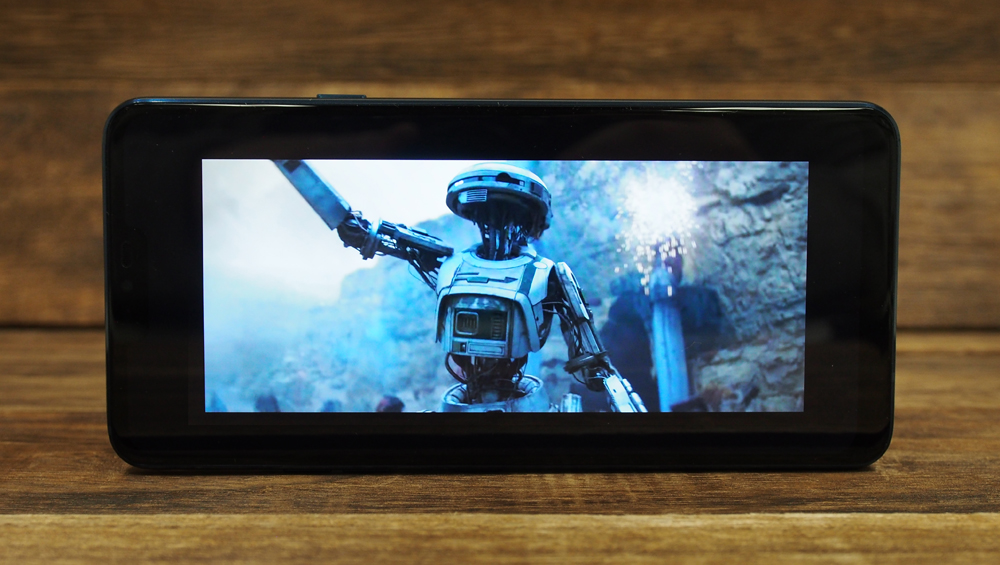 However, you can just pinch zoom the video to fill the screen, and fortunately the zoom stops right before the notch, so you'll never get obscured content. Why this isn't just the default viewing mode is simply baffling. 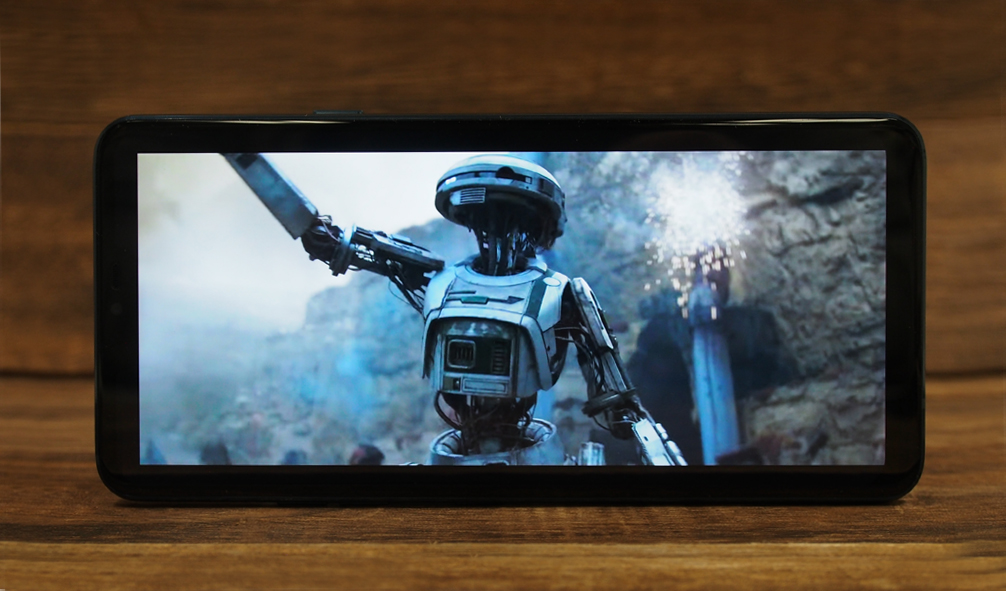 The G7+ features a new speaker technology LG is calling a Boombox speaker, which, if you're old enough, probably just conjures up images of the 1980s and John Cusack in 'Say Anything'. LG's Boombox speaker has nothing to do with retro tape decks, but it is plenty loud. The technology utilizes the internal space of the phone as a resonance chamber to deliver more bass than conventional smartphones. If this sounds familiar, it's because HTC's BoomSound speakers also use the same technology. 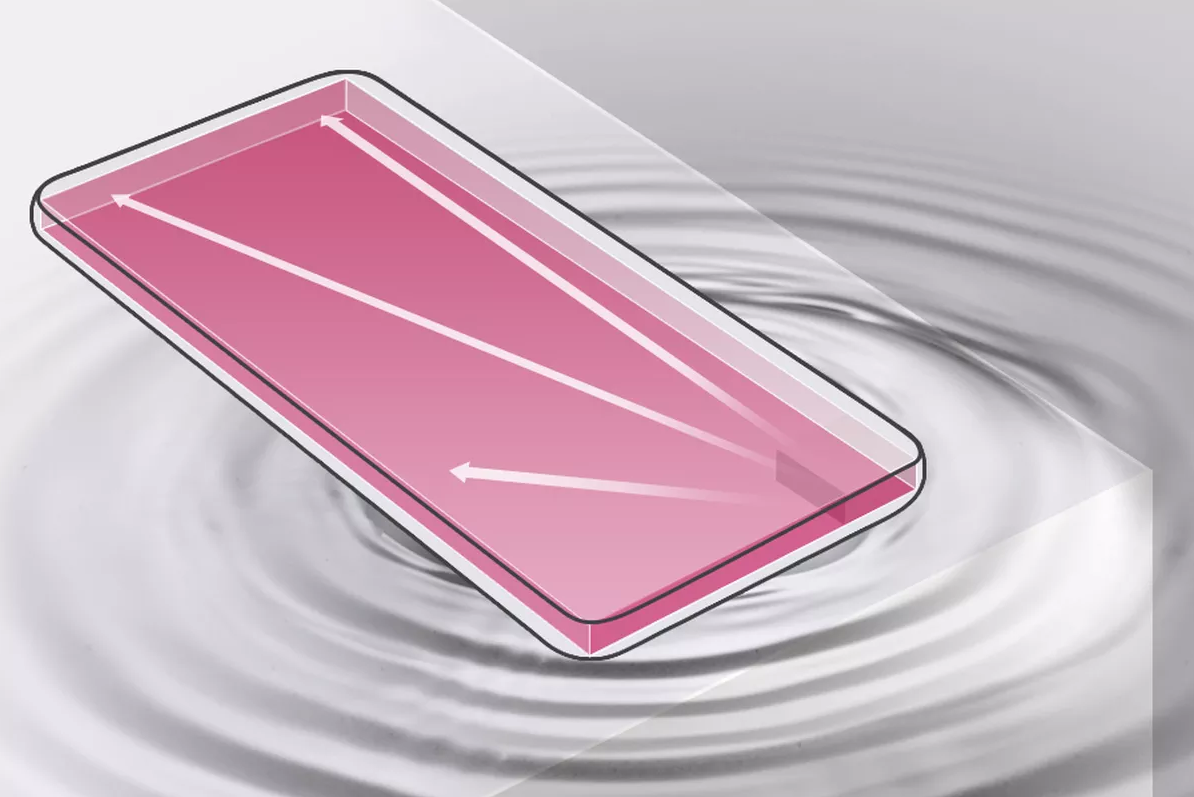 Additionally, when placed on a solid surface, the G7+ will utilize its resonance chamber as a woofer to amplify the bass effect even more. While this works quite well, what's really missing from the G7+ is a stereo speaker setup. Single downward-firing speakers never sound as good as stereo setups, and there's always the risk of muffling the speaker by covering it with your hand. While the G7+ does get quite loud (even more so when you put it on a flat surface), and has a reasonable amount of bass, this is only really useful if you're using it to blast music (and even then, you're better off with a Bluetooth speaker). If you're watching videos, you're holding the phone in your hand and you don't need maximum volume.

As with all of LG's recent smartphones, the G7+ also caters to the audiophile market, with a 32-bit HiFi Quad DAC built-in. The DAC appears to be the same Sabre ES9218P model found in the V30+. It's worth noting that the DAC is only active when using the 3.5mm headphone jack. If you have a pair of USB Type-C headphones, or you're using wireless Bluetooth headphones, your audio quality will depend entirely on the quality of the DAC inside those devices.

A new addition this year is support for DTS:X 3D surround sound, which simulates a surround sound system when you have earphones connected. You can choose between the sound coming from in front of you, side-to-side, or a “wide” option. The separation effect is quite good, although personally I thought the Dolby Atmos surround sound on the Samsung Galaxy S9 was a little better.

The G7+ runs on Android 8.0 Oreo with LG's own UX 6.0 interface on top. UX 6.0 hasn't changed much from the V30+ and G6 and still favors an iOS style app-filled home screen over Android's standard app drawer. Fortunately, you can restore the app drawer by going to Settings > Home Screen > Select Home > and picking Home & app drawer.

Like before, LG has also re-skinned the icons themselves to look more like iOS icons with rounded square backgrounds applied to every app. This isn't really a problem except with Google's default apps like Chrome and the Play Store, because these can't be skinned to follow LG's re-design, so they just look like folders with the app icon sitting on a grey square background. Even the app folders use an iOS-style full-screen display rather than Android's superior in-place folder popup.

The Floating Bar we first saw on the V30+ is back, and gives you quick access to shortcuts and controls. It lives on the edge of the screen and you can move it anywhere you want, tapping it to show app shortcuts, a set of screen capture tools, contacts, and music controls. I still don't find it to be particularly useful, and it was more distracting than helpful, so I left it turned off (though your personal mileage may vary).

If you're a fan of Korean boy band BTS, LG has collaborated with the group to provide exclusive themes for the G7+, but you can only download them if you have the premium LG x BTS G7+ smartphone case, which costs S$118 but honestly looks just like a S$10 plastic case from Aliexpress. Fortunately, if you purchase the G7+ from an authorized LG retailer, you'll get the case for free, or if you're not a BTS fan, you can opt for a wireless charging pad instead. 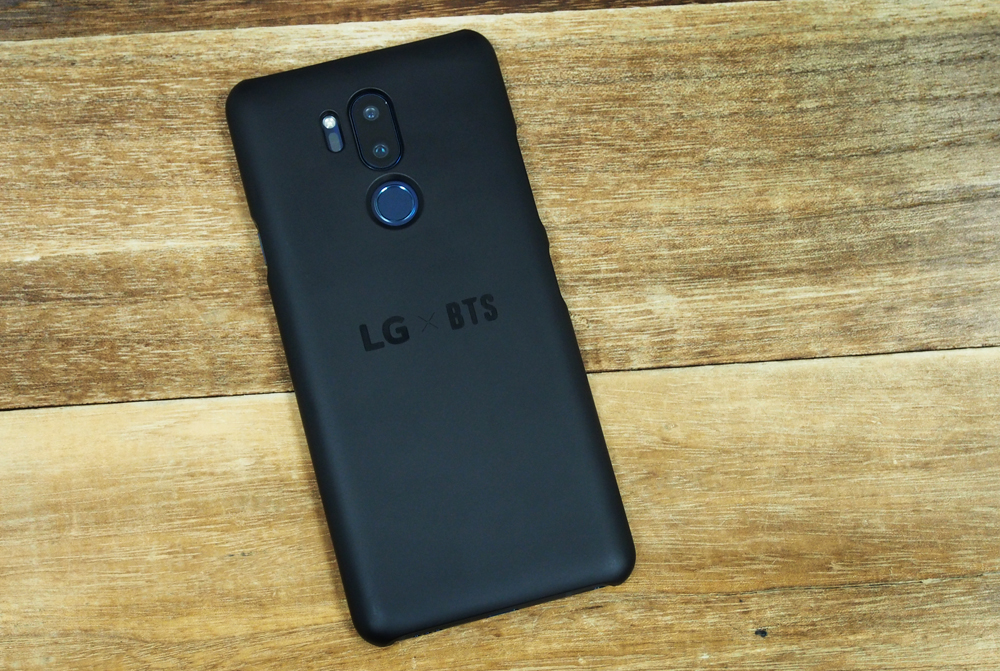 The case has an embedded NFC chip that will let you download BTS themes - there's one for each member of the group, as well as one that features the entire group. Once you've downloaded your theme, you can safely remove the case. The app that lets you download the BTS themes disables screenshots, so I had to take a photo of the phone itself: 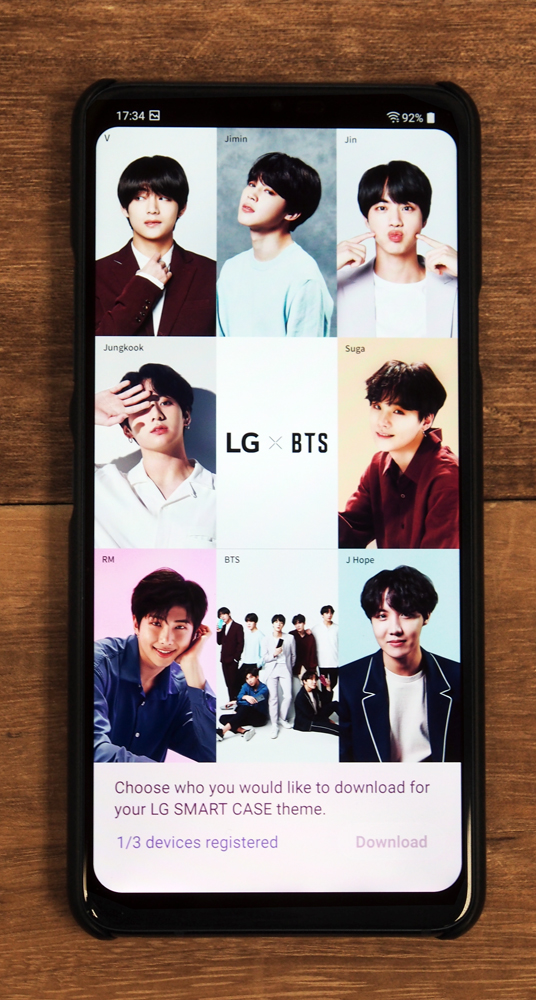 If you want to see the case in action, here's LG Singapore Marketing Manager, Bang Youn Hwang, demonstrating it:

It's worth noting that the themes actually "expire" in May next year (which is when BTS' contract with LG is over) so who knows what happens after that date. Even LG wasn't able to tell me.