*Updated as of 18th October 2013 - Originally published as a preliminary review on 15th October, we've since completed all our tests and updated the article to a full review, complete with ratings. For those who've read our article previously, you can jump direct to our Performance and Conclusion page.

The HTC One Max is no secret device in the making; rumors surfaced as early as May with more substantial reports coming in the past three months. Its arrival is somewhat late since the other phone vendors (Huawei, LG and Sony) have caught up with Samsung in the phablet race. So what new features does the One Max bring to the table and can it take on the big guys? Well, let's find out in this review. 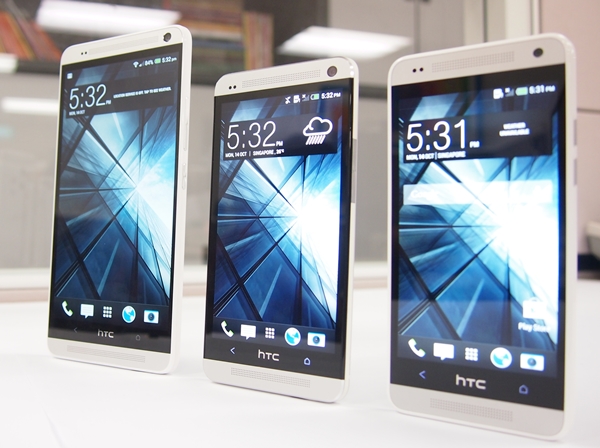 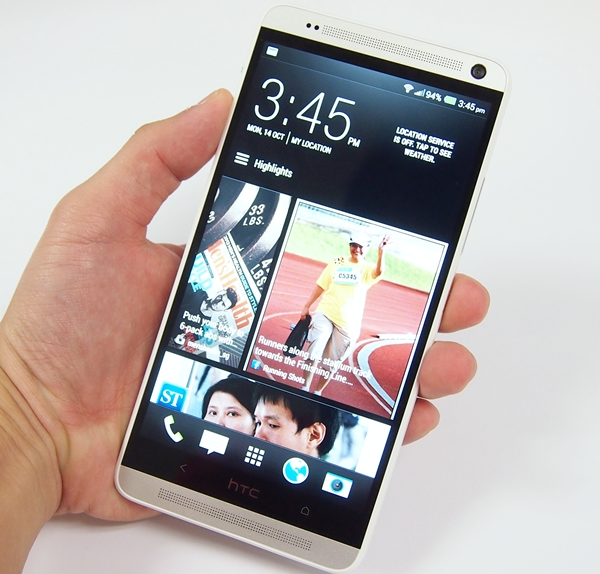 Consumers who find the 4.7-inch HTC One a tad too small for their liking have their prayers answered; the One Max is the larger version of the One with the same design language that has garnered rave reviews around the world including HardwareZone. For a better understanding of the design considerations and of HTC's signature design, do check out our review of the HTC One.

Like its mini counterpart, there are minor differences that you should take note of. The thickness of the polycarbonate strip that runs along the sides of the device is increased. As mentioned in the review of the One mini, this isn't exactly a negative design element as the sides of the One Max are no longer cold like the bare aluminium that comes in contact with your hand with the original One.

HTC finally shifts the power button, originally on the top left corner of the One and One mini, to the right side. Located just below the volume controls, the position of the power button midway along the side makes it convenient to access with your left index finger (for left-handers) or right thumb (for right-handers). 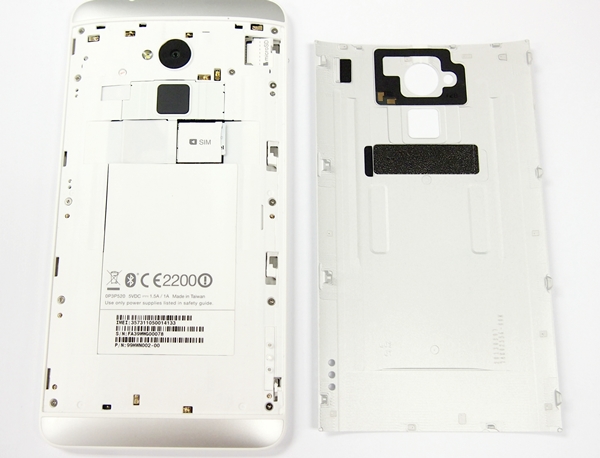 The rear cover is made up of anodized aluminum, which makes it feel very sturdy compared to the plasticky removable backs of its competitors such as the LG Optimus G Pro and Samsung Galaxy Note 3. When putting the rear cover back in its place, it is recommended that you slide the cover in from the left and press it down in a U-shape manner to ensure it is secured in place. This means that you press the plate down along the top section to the side of the device and then to the bottom section of the device. If not, there is a tendency to miss out an area and that would mean the rear cover might not be secure enough.

Weighing at 217g and measuring 10.29mm thick, the One Max is the heaviest and thickest phablet in the market despite not having the biggest display or battery. To put things in perspective, here are the physical dimensions of the other phablets:

However, it is important to note the One Max is the only phablet of the lot to use aluminum as part of its chassis while the other phablets use plastic which is lighter. In addition, the One Max features dual font-facing speakers with dedicated amplifiers which also contributed to its weight slightly.

Nonetheless, the One Max is undeniably bulky for its form factor. While the contoured back makes the One Max rest solidly and comfortably in the hand, it also centralizes the weight to the middle of the device. Most other smartphones have their weights distributed evenly. As such, if you don't support its center of gravity, it might feel like the One Max will topple right out of your hands.

The One Max inherits the same two-button layout as the One and One mini which annoys us. The HTC logo is placed at a spot that has been effectively standardized as the location for the home button across the majority of Android phones. Shoving the home button to the right of the logo goes against what is intuitive and ingrained in most users, which is never a good thing. Even after repetitive use of the device over the past few days, we still found ourselves tapping the HTC logo subconsciously expecting it to take us back to the home screen. As such, we found this design choice unacceptable. More so because it doesn't have any function other than to annoy its users. 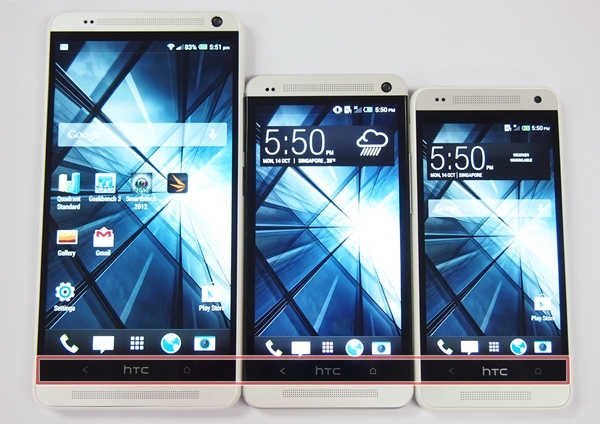 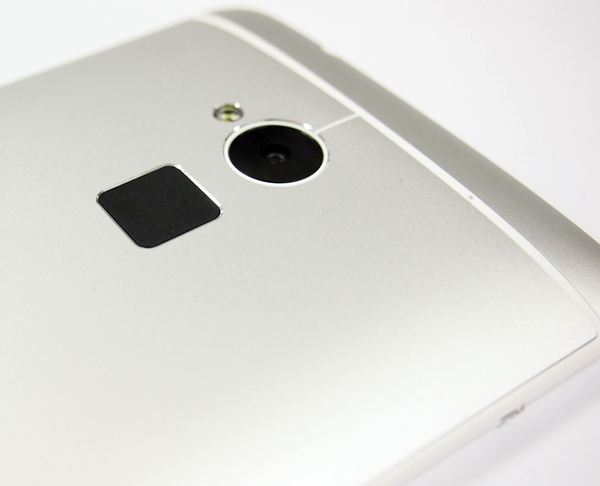 Touted as the most convenient security on Android, the One Max has a fingerprint sensor located just below the rear camera. Before you start to brand it as a copycat to the Apple iPhone 5S, it is good to set the record straight that Apple is also not the first to implement a fingerprint sensor on a phone.

Based on our research, there are four phones before the iPhone 5S which have fingerprint scanners. The four phones are the Windows Mobile 6-powered Toshiba G900, Windows Mobile 6.1-powered Acer M900, Android 2.2-powered Motorola Atrix and the Pantech Vega LTE-A. Of the four devices, only the G900 goes beyond the security feature of a fingerprint scanner to include a quick launch function and navigate the interface. 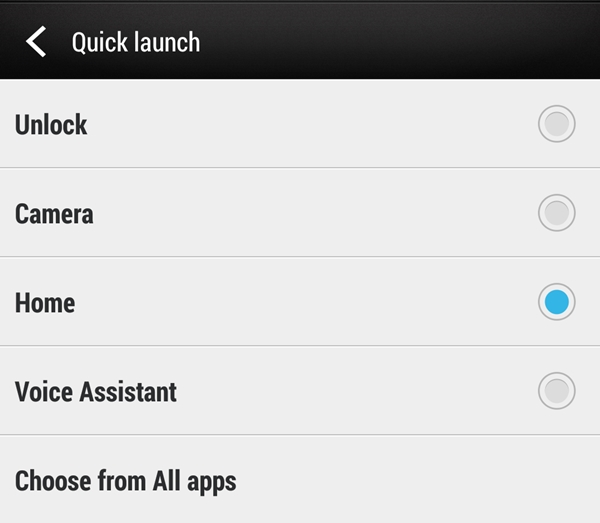 Overall, HTC's implementation of the fingerprint scanner is decent, especially with the added functionality of quick launching up to three apps. However, there is certainly room for improvement for HTC in terms of user experience since the most obvious comparison will be with the iPhone 5S, which in all honesty, sets the benchmark.

If you haven't noticed by now, the One Max is HTC's first foray into the phablet segment. The One Max sports a 5.9-inch Super LCD 3 display with a resolution of 1,920 x 1,080 pixels. In terms of screen quality, the One Max is top notch.

Similar to the 4.7-inch One, we find the display on the One Max to be one of the sharpest if not the sharpest we've ever seen. It delivers natural and balanced color reproduction in contrast to the slightly oversaturated Super AMOLED display of the Galaxy Note 3. Viewing angles are excellent too, and does not suffer from a washed out appearance. In direct sunlight, with brightness set to maximum, we experienced slight problems in viewing content on the display, but that's understandable given the LCD technology used.

We were shown two new accessories by HTC for the One Max - the Power Flip Case and HTC BoomBass. Now, let's take a look at the two accessories and what they have to offer:

As the name suggests, the flip case not only protects the One Max from scratches and bumps, it also provides extra battery juice to the One Max. According to HTC, the Power Flip Case is able to provide 30% more battery for the One Max thanks to its embedded 1,210mAh battery.

The 1,210mAh battery is actually integrated as part of the flip case (red cover). Charging is done via the three pogo pins located at the bottom left corner of the black case. Due to the embedded battery, do not expect the Power Flip Case to be light. In fact, it is heavy on its own and if you are planning to use it with the One Max, the combined weight will certainly weigh your pocket down.

The HTC BoomBass is a mini subwoofer with a built-in amplifier and it goes hand-in-hand with the phone's dual front-facing speakers to form a 2.1-channel sound system. According to HTC, the BoomBass will deliver clear/strong bass for better music and gaming experience. It has Apt-X support (Apt-X is a real-time digital audio data reduction system which offers linear compression of audio samples by a factor of 4:1, and hence mitigates some of the drop in quality due to Bluetooth transmissions), for better wireless audio transmission support and pairs with your One Max via NFC.

Pairing of the One Max and BoomBass is easy. You just need to enable NFC on the One Max and tap the upper portion of the device on the top of the BoomBass. During our trials, we found the audio experience to be significantly better thanks to the extra bass delivered by the BoomBass. To maximize the output of the BoomBass, you will need to put the volume of the One Max close to maximum. Be warned though, the combined 2.1-channel sound system is quite impressive for a mobile device, but it's also fairly loud at the same time (we drew in a lot of stares from across our office). The only drawback is when you're using it at lower volumes, as BoomBass will not be loud enough to give you any significant boost in bass. In terms of loudness, we feel that the BoomBass volume isn't quite synced with the phone's speakers.