A touch of Voodoo 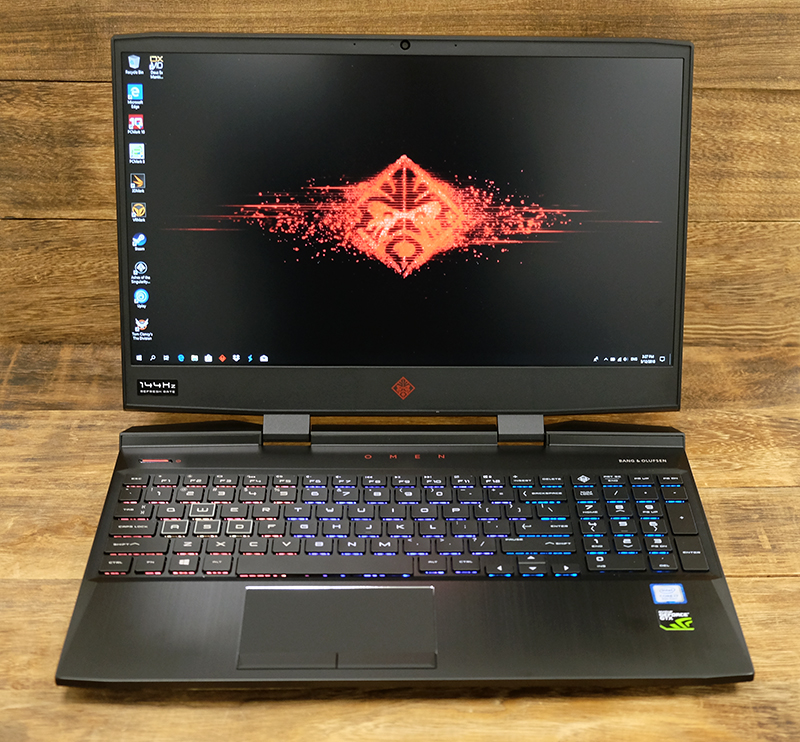 Like most of the gaming laptops we’ve reviewed this year, HP’s latest version of the Omen 15 is very much an iterative upgrade over its predecessor. That’s not necessarily a bad thing, as it’s less risky and allows for small refinements and improvements that can go a long way toward creating an all-around better product.

The crimson tribal logo and red accents make an appearance again, and the lid boasts distinctive carbon fiber detailing and an X-shaped pattern. The Omen 15 is a laptop for gamers, and it’s built specifically to appeal to them with an aggressive, eye-catching design. 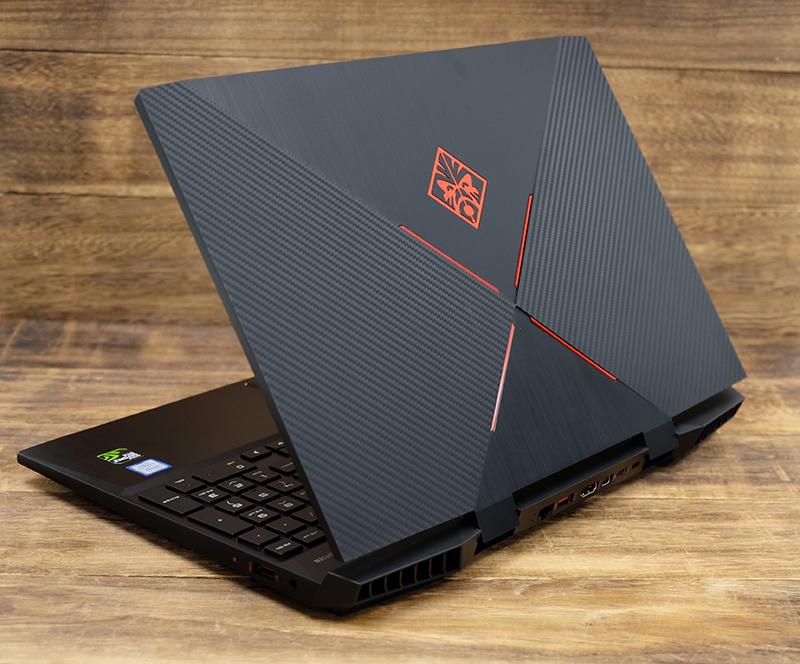 I like the look of the Omen 15, and I think it expresses the brand’s character without being too gaudy or over-the-top. This is also a laptop with a Max-Q design, which means it consumes less power than your average gaming notebook.

However, compared to some of the other laptops we’ve reviewed in this space, such as the Razer Blade and MSI GS65 Stealth Thin, the Omen 15 is still a little chunky. It’s noticeably thicker and heavier, measuring 26mm thick compared to the Blade’s 17.3mm and weighing 2.4kg to the latter’s 2.1kg. These may seem like small differences, but they’re pretty obvious when you’re handling the laptop and have to carry it around with you.

The Omen 15 may be cheaper than its competitors, but it looks like its paying for that in terms of added bulk. Fortunately, the laptop has pretty good build quality. The metal chassis feels solid and well-built, and there’s little to no discernible flex anywhere. It also has a brushed metal finish, which makes for quite a nice look overall. There’s some flexing to the lid, but since you’re not going to be fiddling with that most of the time anyway, I don’t think it poses much of a problem.

One of the biggest improvements over the previous generation is also the slimmer bezels. The bezels at the side have been lopped off, and in addition to looking way better, it also helps to reduce the footprint of the laptop. The bezel at the bottom of the screen is still quite thick however, and I’m not quite sure how I feel about the hinge design, which creates the impression that the display is floating free from the body of the laptop.

That said, the 1080p IPS display is sufficiently bright and has good viewing angles and contrast. The matte panel helps reduce reflections and glare from overhead lighting, and the 144Hz refresh rate means that everything, even dragging windows around on the desktop, feels super smooth and fluid. G-Sync is supported as well, so you shouldn’t experience any stuttering or tearing in games.

The dual bottom-firing speakers are pretty good as well, and it looks like the Bang & Olufsen tuning counts for something here. In fact, they may be one of the best speakers on a gaming laptop, and I found myself actually wanting to continue listening to the sound they pump out. For starters, they definitely get loud enough to fill a small room, and music comes through with decent clarity and minimal distortion. There was nice impact to the low-end of the audio spectrum as well, but I did notice some sibilance in the higher frequencies.

The laptop also comes equipped with a full-sized keyboard that offers decent key travel and tactile feedback. There’s no support for per-key customizations however, and you’re limited to four independent zones, including the WASD key cluster. 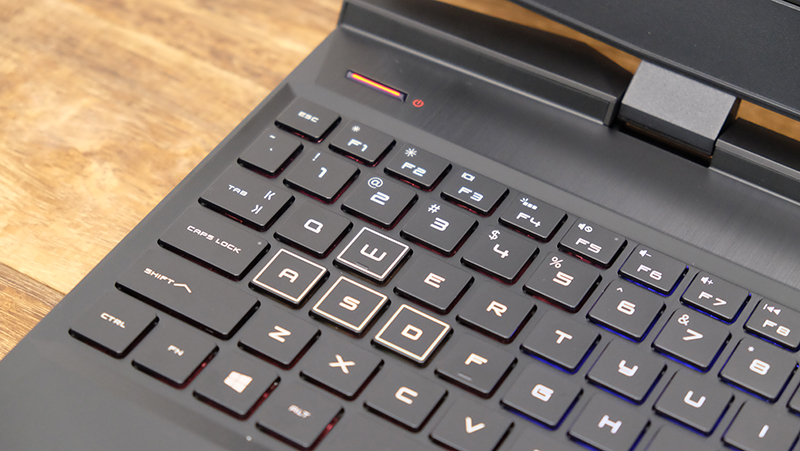 Unfortunately, both keyboard and trackpad were buggy, at least upon first impressions. The keyboard would repeatedly spam a single key whenever I clicked on any text field, and the trackpad, which incidentally is also not a Precision Touchpad, would stop working shortly after booting up. 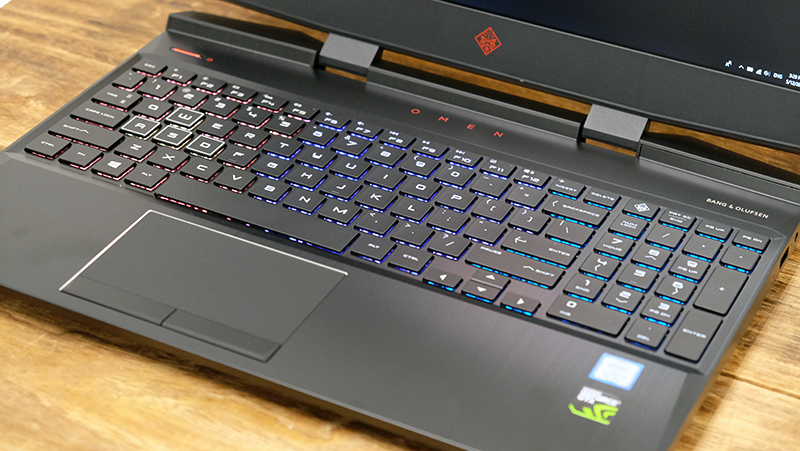 I managed to fix the issues by reinstalling the keyboard drivers, so it’s possible that this was just a one-off instance of bad luck. Still, I’d really have liked to see a Windows Precision Touchpad here, as it does make a difference in terms of responsiveness and accuracy.

Networking is handled by a 2x2 Intel Wireless-AC 9560 module, which supports a maximum throughput of up to 1.73Gbps and the latest 802.11ac Wave 2 routers.

Finally, there’s a decent selection of ports and connectors to choose from. You get one Thunderbolt 3 port, three USB 3.1 (Gen 1) Type-A, one Mini DisplayPort, one HDMI, and an Ethernet jack. There’s a dedicated SD card reader as well, which is a nice addition. 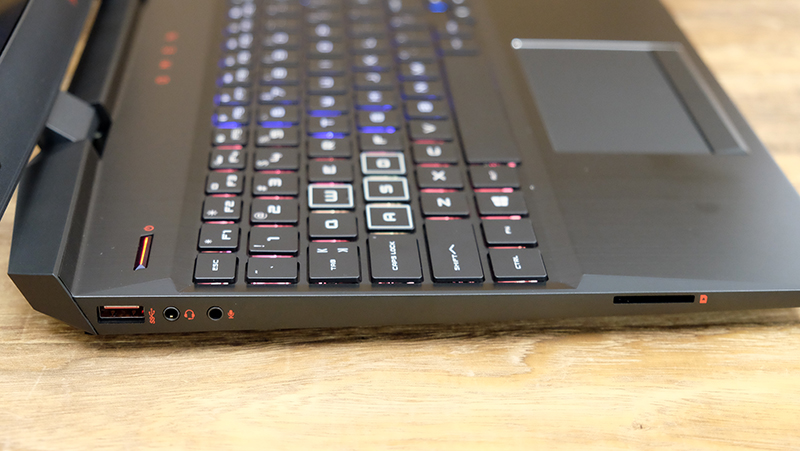 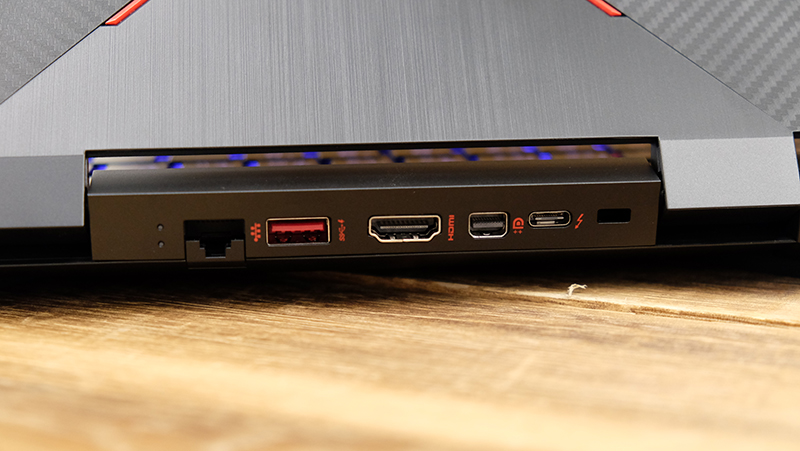 When it comes to performance, the long and short of it is that the Omen 15 and its GeForce GTX 1070 Max-Q GPU will run nearly any modern game at High to maximum settings. The good news is that it manages to stay quite cool as well, and the palm rests never became warm enough to cause discomfort. The dual fans also draw in cold air from the bottom and expel heat through large vents at the rear of the notebook, so you won’t have a stream of hot air disrupting your mousing hand when using the laptop.