Note: This review was first published on 17 November 2021. 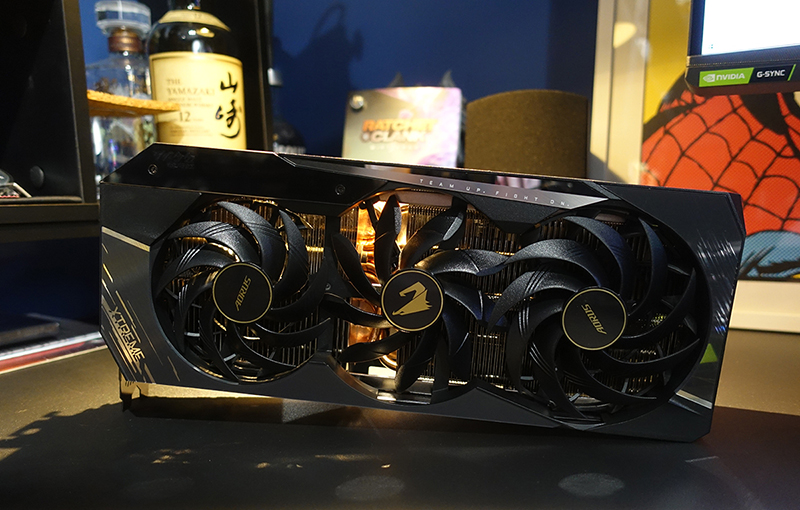 The Gigabyte Aorus GeForce RTX 3080 Ti Xtreme is a beast of a card. You'll need hefty hardware to keep that GA102 GPU cool, and Gigabyte has spared no expense to do that. It's a boxy, faceted design, requiring a good 3.5 slots in your case and measuring 319mm long. You'll only want this if you have a large, spacious case, and then some to spare.

Gigabyte's Max-covered cooling, as it's calling it, comprises two 115mm fans and one 100mm fan that spin in an alternate pattern, in order to reduce the turbulence of adjacent fans and increase air pressure. They also utilise so-called blade stack fans, where the airflow is split by a triangular fan edge and guided smoothly through the 3D stripe curve on the fan surface. The fans themselves are girded by what Gigabyte refers to as its wind claw design, and they have the appearance of sharp prongs or claws that reinforce each fan and help channel air towards the heat sink. 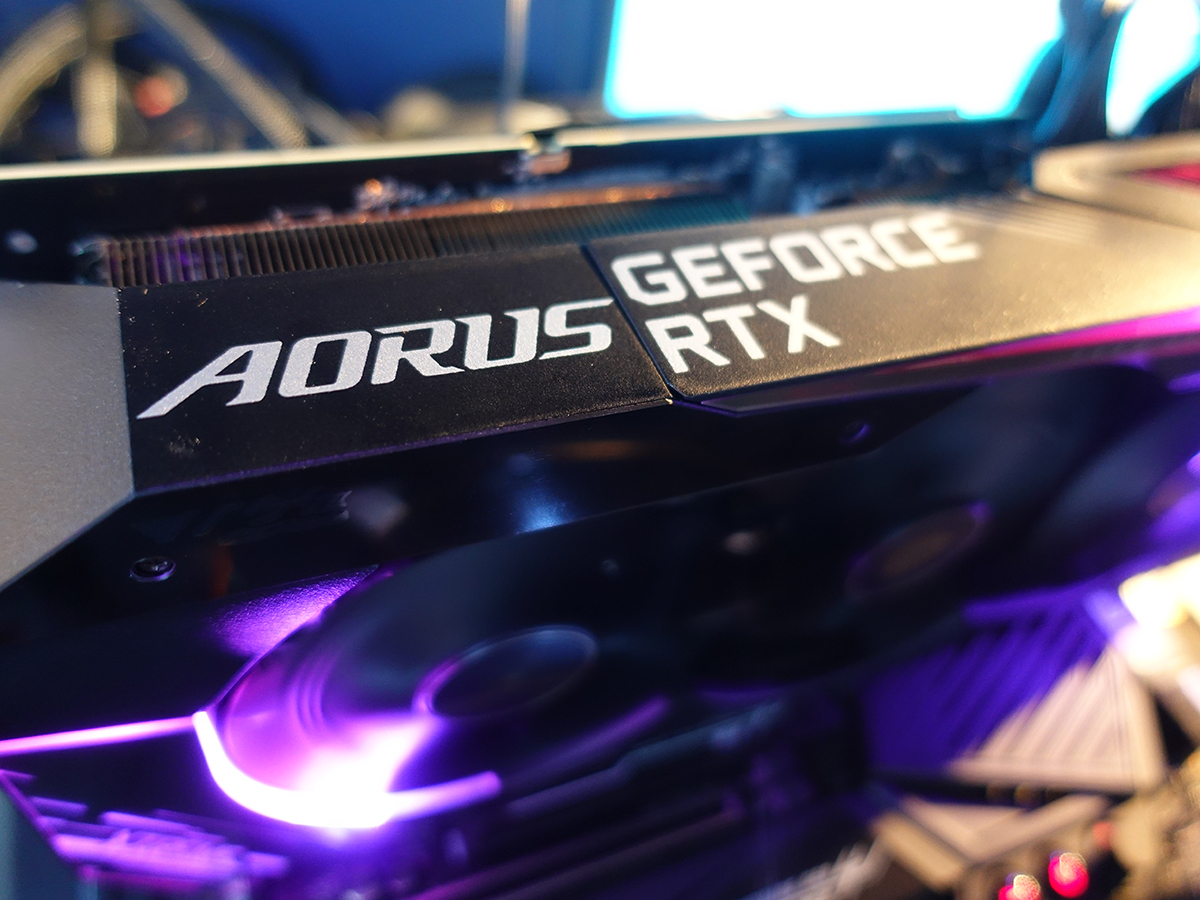 The double ball-bearing fans support semi-passive cooling, so they'll remain off when the card isn't working as hard.

A card this powerful requires an equally hefty heat sink, and Gigabyte has installed an extended heat sink that can soak up even more heat. The GPU die and VRAM components make direct contact with multiple heat pipes and a large vapour chamber to more efficiently transfer heat from the GPU to the heat sink. Finally, the heat sink fins adopt an angular and unequal fin height to help channel air through the fins and increase the contact surface. 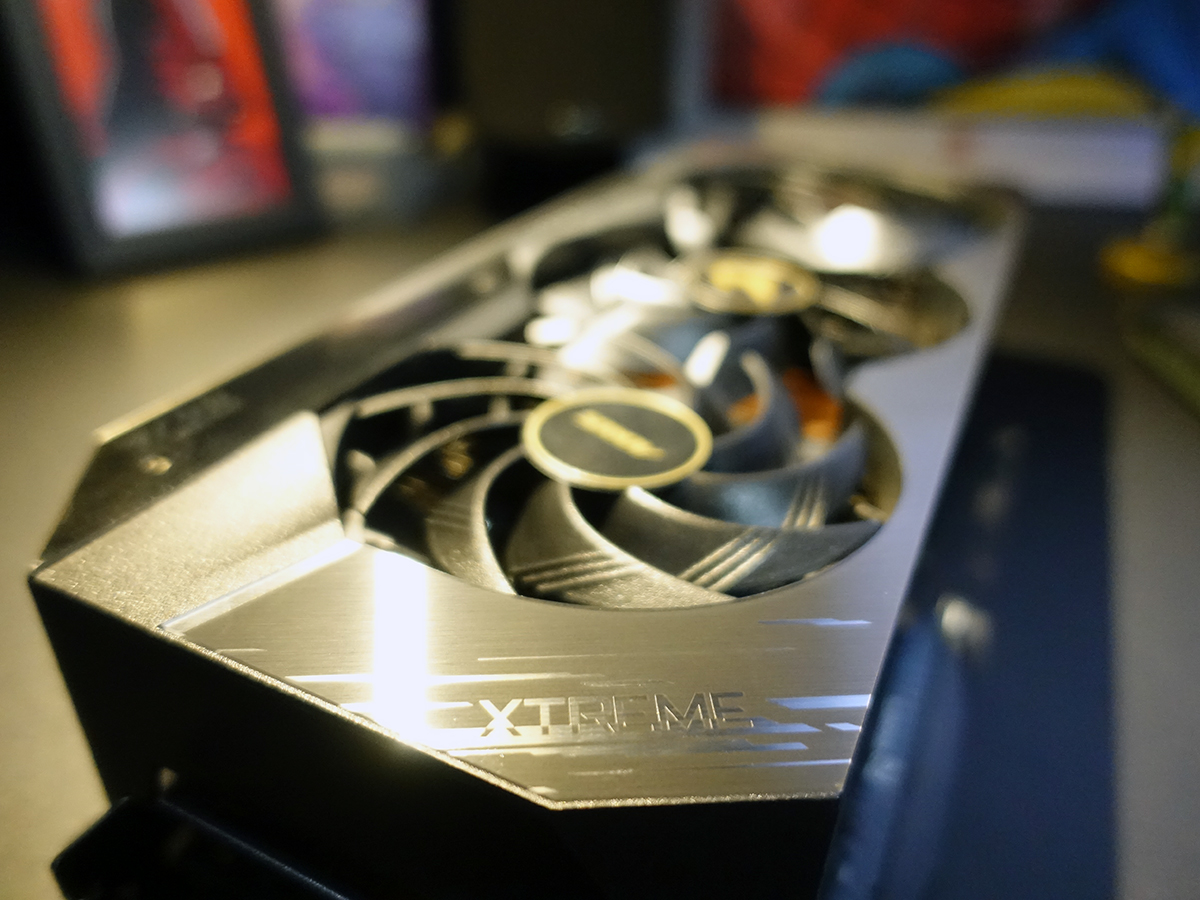 A cutout on the metal backplate helps provide ventilation for air to leave the card, further improving thermal performance. The backplate reinforces the card too and prevents the PCB from flexing, which is especially crucial in a card that is this big and heavy. 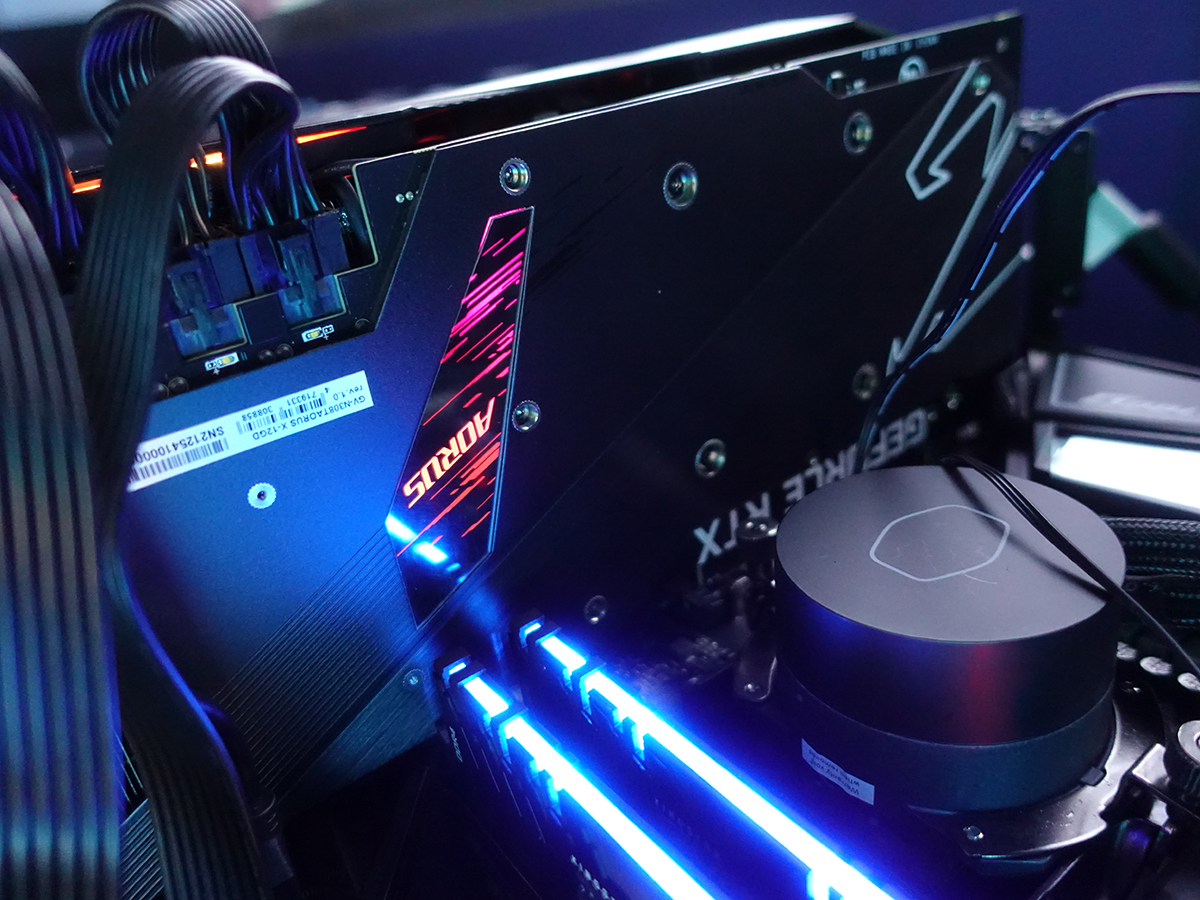 One unique feature is the LCD screen built into the edge of the card. It can display information about your GPU, such as the temperature and clock speeds, in addition to custom text, pictures, and GIFs. You can also adjust the lighting effects via Gigabyte's RGB Fusion 2.0 software. In a whimsical twist, the LCD display supports something called Chibi Time as well. It's a little falcon that lives in the screen and grows up the more time you spend with your graphics card. It eats, sleeps, and flies around, kind of like a little Tamagotchi inside your card. There's not much use for it, but it sure is cute. 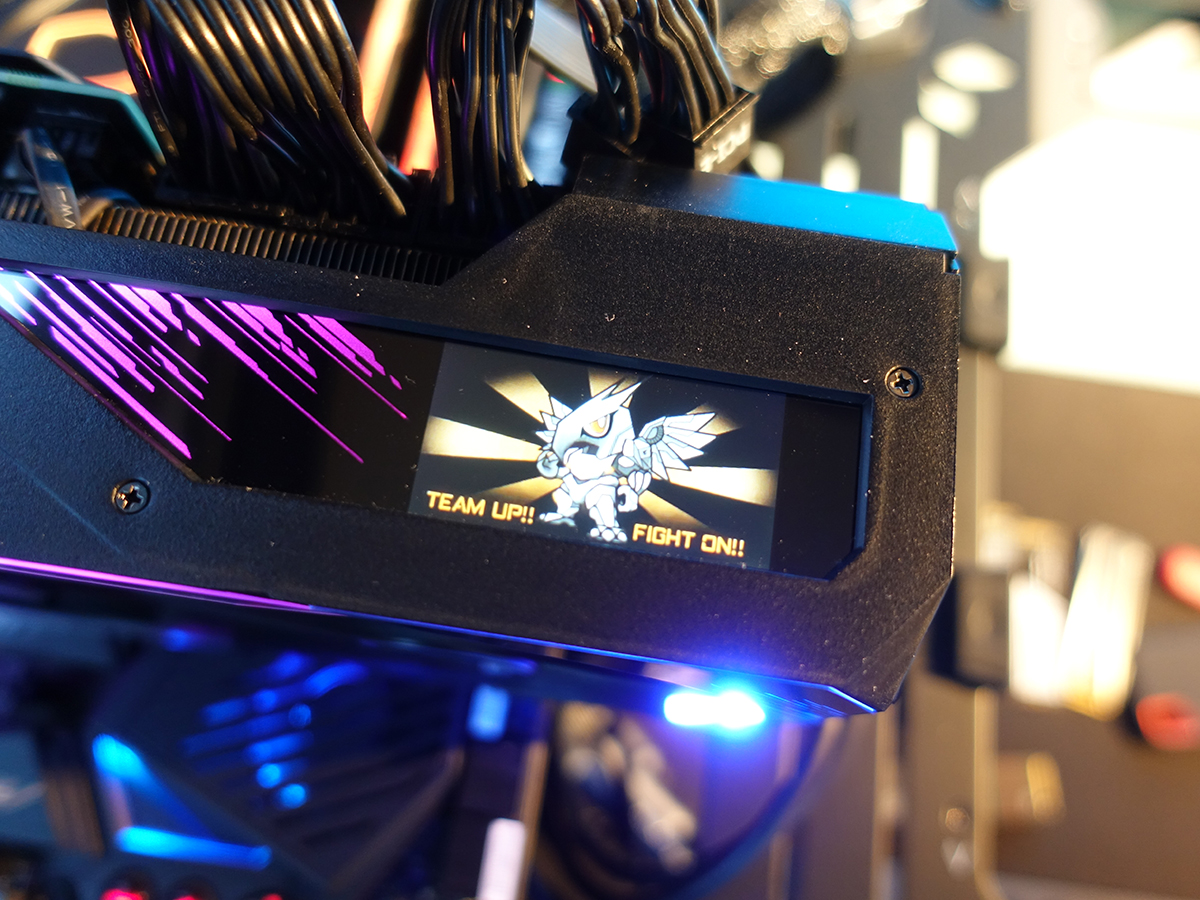 A dual BIOS switch on the edge lets you switch between the default OC mode and Silent mode without using the software. In OC mode, the boost clock goes up to 1,830MHz, up from a more modest 1,665MHz reference clock.

According to Gigabyte, it has redesigned the PCB with improved materials and top-grade circuitry for more stable operation. For instance, the card uses a better power phase design that supposedly allows the MOSFETs to operate at a lower temperature, in addition to built-in over-temperature protections and load balancing for each MOSFET. There is also a special PCB coating that confers dust, moisture, and corrosion resistance, which guards against corrosion in humid environments, among other things. 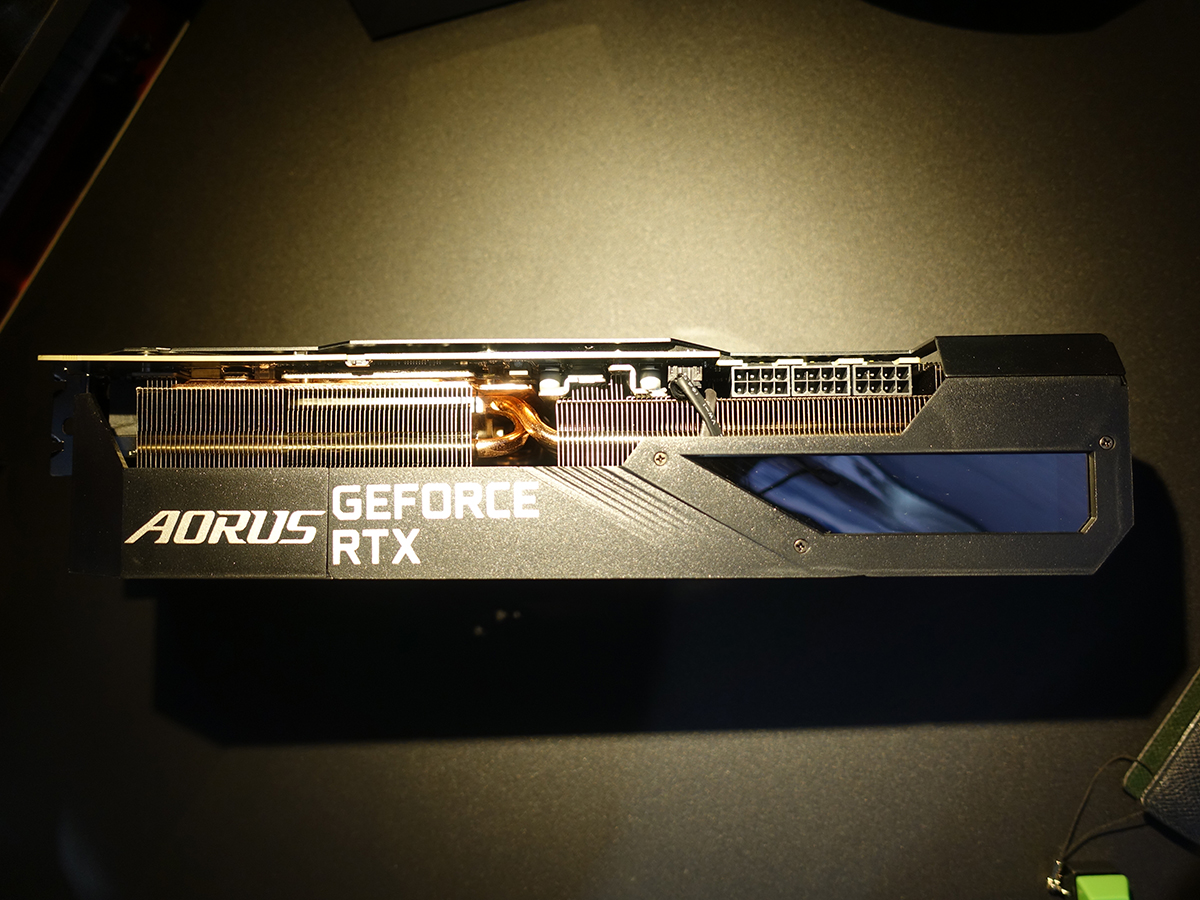 Round the back, you'll find a plethora of output options, including three HDMI and three DisplayPort connectors for a whopping total of six connectors. Finally, the card required three 8-pin PCIe connectors for power, so bear in mind that that's an additional cable you'll have to contend with.

Write a Review
Compare This | Specifications
Excellent 4K performance
Nifty LED display on the edge for additional customisation
A whopping total of six display outputs
Runs slightly hotter than competing cards
1080p performance lags the competition
Very expensive
Our articles may contain affiliate links. If you buy through these links, we may earn a small commission.