Sometime last year, NVIDIA's FXAA (fast approximate anti-aliasing) algorithm crept into games and offered massive performance gains over traditional multi-sampling anti-aliasing (MSAA). FXAA is actually a post-processing pixel shader program that is able to even run on DX9 compliant hardware and it doesn't require DirectCompute capable stream processors. Working on pixels on the final rendered scene instead of identifying polygons and line edges of other anti-aliasing techniques, FXAA attempts to analyze how much contrast there is between the brightest and darkest pixels nearby to determine the edges. Because of it simplicity, it is fast and used far less memory footprint and in general, a better alternative to MSAA.

For the new drivers with Keppler hardware, such as the GTX 680, FXAA is no longer a game-only option as the driver control panel will now allow you to enable FXAA to enjoy fast and efficient anti-aliasing on any game.

It seems like an act of not resting on one's laurel's as NVIDIA seems to have put that saying in action by introducing TXAA.  It is touted to be a new film-style anti-aliasing technique that is designed to make use the high texture performance of Kepler's improved Polymorph Engine. TXAA is a technology that is based on hardware anti-aliasing (AA) and software-based (Hollywood-style CG rendering) AA resolve. TXAA offers two modes and they are as shown:- 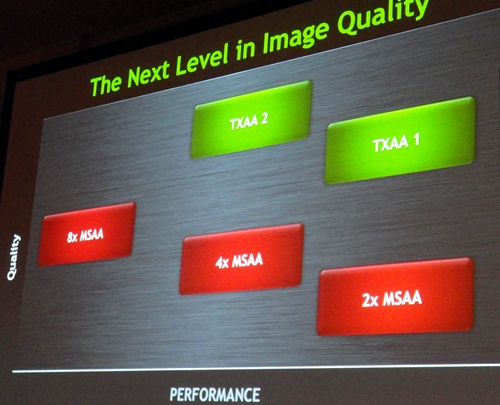 Besides smoothing over the jagged effects of aliasing, NVIDIA is attempting to tackle the visual effect of artifacts tearing with its adaptive VSync technology. Tearing occurs due to a mismatch with frame rates of rendered in-game scenes with that of the monitor. NVIDIA has implemented its adaptive VSync technology with its release of their Release 300 drivers that accompany the GeForce GTX 680. Once again, this is yet another feature that NVIDIA will eventually implement in the general driver stack to also enable it on Fermi based cards in time to come. 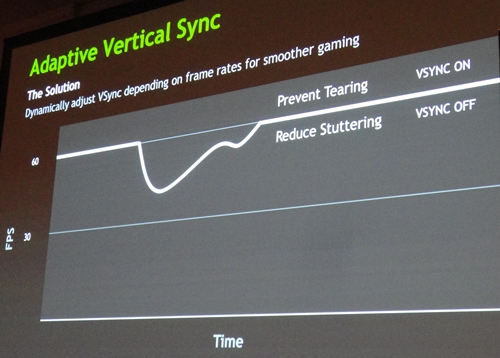 NIVIDA's adaptive VSync technology works by turning VSync on or off to make the frame display more in rhythm, thus reduces tear/stutter during gameplay. When frame rates drop below 60fps, VSync is disable, allowing frame rates to run unfettered to reduce stuttering. Once the frame rates are above the threshold, VSync is turned on to reduce tearing.

GeForce GTX 680 is marketed as capable of supporting 3D Vision Surround on up to three monitors natively on the new GPU due to its new display engine. According to our in-depth interview with NVIDIA engineers, Geforce GTX 680 is actually capable of supporting up to four monitors in 3D; however, the engineers did not see the practical usage of such a multi-display setup. If you think about it, what they say makes sense as the ideal setup comprises of three displays as incorporating a fourth display would prove disruptive for surround gaming purposes, no matter which way you stack those screens.

To prevent the fourth screen support from going to disuse, NVIDIA's drivers allows using a fourth screen for for general computing purposes. NVIDIA labels the fourth and crowning display as an accessory display. It allows the gamer some respite from the 3D Vision Surround visuals provided by the other three displays, to check his Facebook news feed or even his emails! 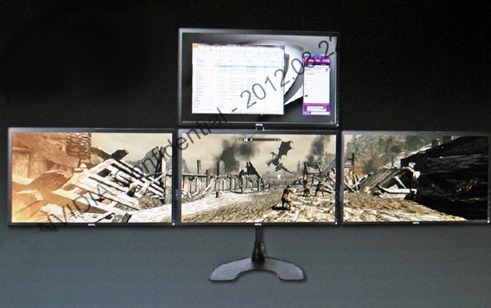 Finally, you don't require two NVIDIA GPUs to setup triple displays for 3D gaming and we can't tell you how much a relief this news is going to be for multi-monitor aficionados. From further querying the NVIDIA staff, they mentioned that the native display support for up to four monitors will extend to even the GeForce GT 640M mobile GPU. In essence, we can extrapolate this support to mean that all Keppler based GPUs can handle up to quad displays.