Introduction: A compact machine for the living room 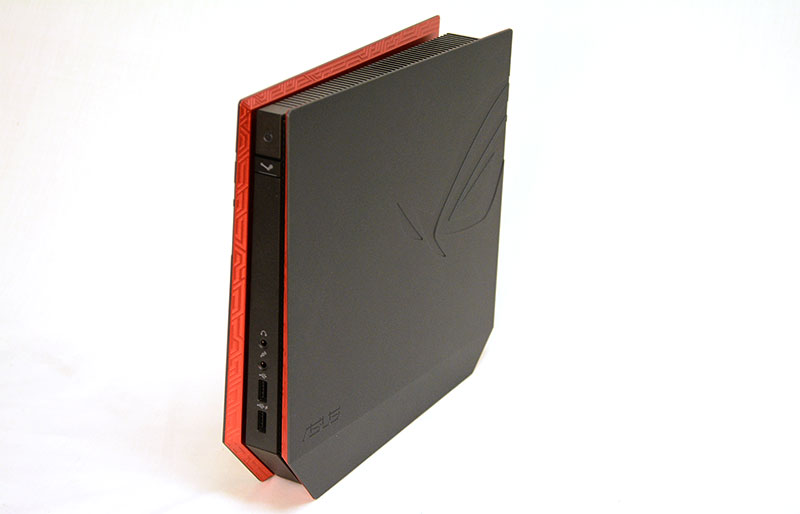 In the rarefied spheres of hardcore gamers and enthusiasts, size has sometimes become synonymous with performance and power. In the DIY market, huge tower cases like the Corsair Obsidian 900D and NZXT Switch 810 have been designed to tickle the fancy of system builders who want to go for multi-GPU setups and elaborate water-cooling loops.

However, it’s still often the case that a significant number of gamers demand something a lot smaller and compact. These gamers may not have the space to accommodate a full-sized tower PC, and they probably don’t even need one. When it comes to casual gamers, the amount of available space for water-cooling radiators, E-ATX motherboards, and quad-GPU setups doesn’t matter one jot.

Instead, they’d much prefer a easily accessible and stylish system that will deliver playable frame rates on most modern games. We recently reviewed the ASUS ROG G20AJ and Aftershock Tremor, both small form factor (SFF) PCs that managed to deliver attractive performance to gamers who prefer not to go the DIY route.

The ROG G20AJ in particular stood out because of its compact 12.5L chassis. The way we saw it, it would do fine on a cramped desk and fit just about anywhere. But what if you wanted something even smaller? That’s where the ROG GR6 comes in.

It sports the same signature red-and-black ROG color scheme and its design is very similar to the larger G20AJ. The narrow front panel is recessed, flanked by the two side panels that protrude beyond it. The front-facing edges of the panels even feature a vaguely futuristic design that is evocative of the Mayan-inspired mesh on the ROG G20AJ. 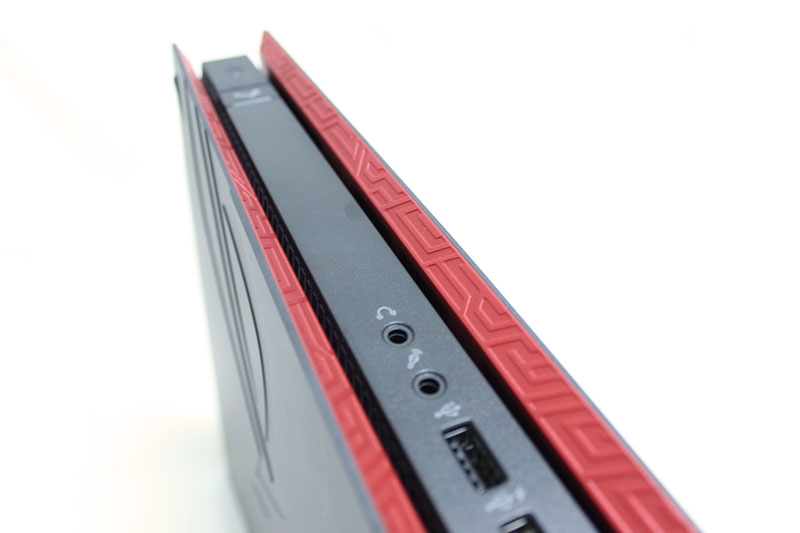 However, the design is overall a lot more restrained, and the front I/O ports and panel itself are colored black instead of the G20AJ’s striking red. There are two USB 2.0 ports at the front, along with separate jacks for a headphone and microphone.

The bottom USB port also has a tiny lightning icon next to it. It supports a useful USB Charger feature that allows the charging of mobile devices regardless of whether the GR6 is sleeping, hibernating, or even completely powered down. We actually really appreciate this feature and can see it coming in handy for those of you who just have one too many mobile devices to charge overnight.

The power button is located near the top, with a dedicated Steam Big Picture button located below it. This is actually quite interesting – pushing the latter button will launch Steam in Big Picture mode, providing a easier access to Steam’s interface designed for use with TVs and game controllers. Even if the machine is powered off, hitting the Big Picture button will cause the machine to boot up and launch Big Picture. Of course, do note that this isn't going to be an instantaneous launch. All it does is boot up your machine and then proceed to launch Big Picture from your desktop, so we were left waiting for at least a couple of minutes still (mostly because it's still running off a mechanical hard drive).

This feature is convenient for sure, but it also reveals quite a bit about ASUS’ intentions for the ROG GR6. The compact machine is intended to have a place in your living room and deliver a console-like gaming experience. This is further borne out by the fact that you can lay the GR6 quite comfortably on its side as well. In fact, there are four rubber base stands on the left side panel for just this purpose, so you don’t have to worry about the system sliding around on its side. 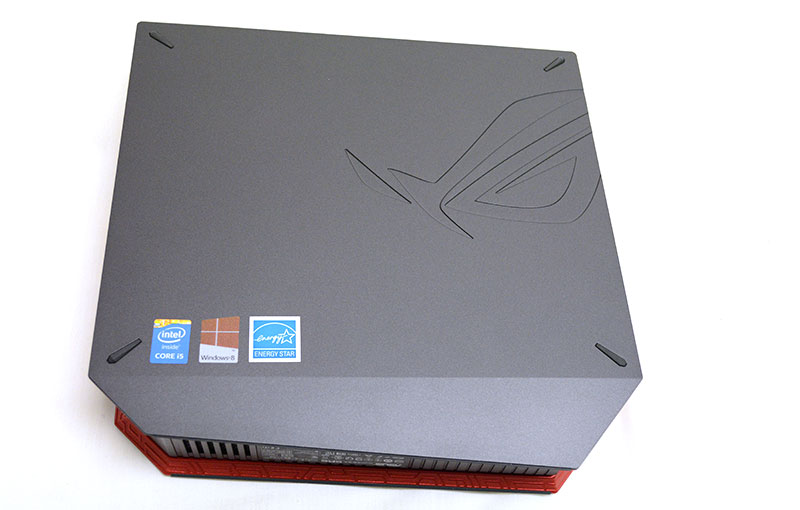 Heat is vented through air vents at the top and bottom of the chassis. When we put our hand close to the vent, we could palpably feel the steady stream of warm air exiting the chassis, so the cooling system is clearly keeping busy. 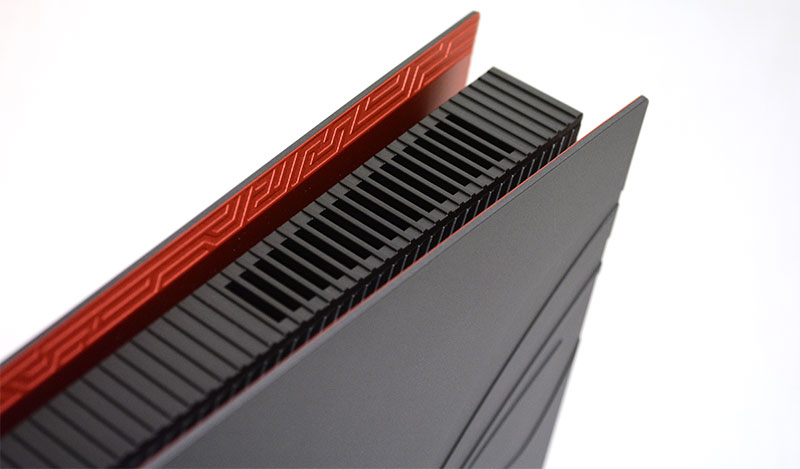 Round the back, the GR6 has four USB 3.0 ports, one HDMI output, a DisplayPort connector, one Intel Gigabit Ethernet port and one S/PDIF optical out. It’s lacking a DVI port so you’ll want to make sure that you have the right display cables on hand. There are also three audio jacks (Line in/Mic in/Speaker out) at the rear.

A Kensington Lock port sits at the bottom, so you can secure the machine with a compatible lock. This may seem a strange feature for a desktop PC, but the ROG GR6 is really more portable gaming machine than desktop. It’s the perfect size to take along to a LAN party, where you’ll definitely appreciate the ability to secure it.

The Kensington Lock port also doubles as a lock for the side cover. The lock works via a sliding cover – the side panel unlocks when you slide the tiny cover to right to reveal the “Unlock” text. Pushing the cover back in the other direction locks the side panel in place. 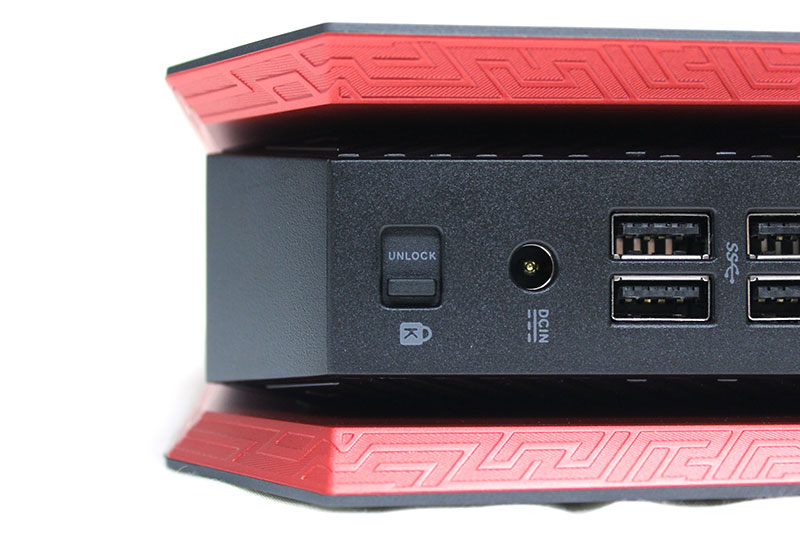 The removable side panel essentially means that the ROG GR6 is user upgradeable. You’ll have the freedom to add in more RAM, or replace the hard drive. We’ll cover more details of the upgrade process and options in the next section.

We can’t attest to the actual utility of these features, but they’re probably fun to play around with as you try to get the best possible in-game sound. 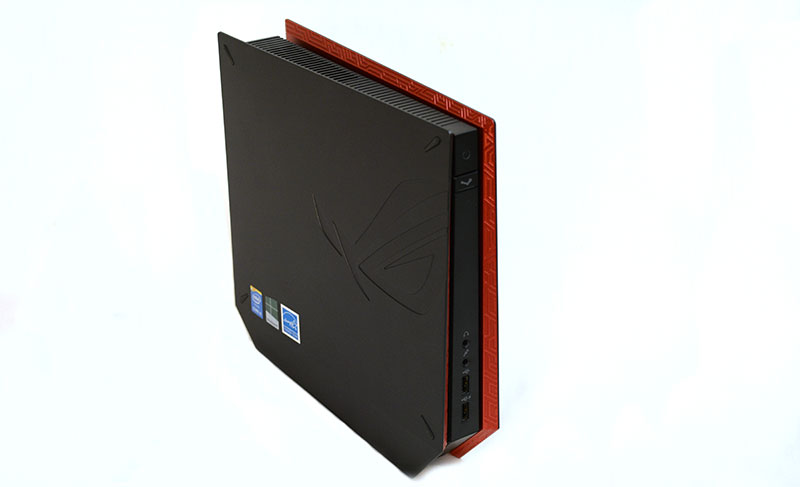 Now for the important part – what is the ROG GR6 really packing? First teased back in April, the GR6 is powered by a dual-core Intel Core i5-5200U fifth-generation Broadwell processor. The CPU has a base speed of 2.2GHz and a Turbo Boost speed of up to 2.7GHz. It also comes with 3MB of L3 cache.

The U suffix in the processor’s name marks it as a ultra-low power part, and indeed it has a Thermal Design Power (TDP) of just 15 watts. In comparison, the Core i7-5700HQ on the Gigabyte Aorus X5 has a TDP of 47 watts. In fact, the Intel Core i5-5200U is also found on many other non-gaming notebooks and 2-in-1 hybrids like the Dell XPS 13 and Lenovo Yoga 3.

It may seem a little strange that ASUS has included a processor that appears to be geared toward power-savings in gaming machine that can only run off power from a wall adapter. Potential performance issues aside, ASUS is actually aligning itself with Intel’s strategy for its Broadwell processors.

The Atom and Core M processors have been reserved for ultra-thin and ultra-portable devices like the 2015 MacBook and the ASUS Transformer Book T300 Chi. On the other hand, mobile processors like the Core i5-5200U with a TDP of between 15 and 28 watts are reserved for slightly more powerful portable notebooks and mini PCs. If we think of the ROG GR6 as less of a desktop and more of a mini PC or portable console, this decision starts to make more sense.

However, that doesn’t mean that we have no qualms about what this would mean for performance though, and we’ll take a closer look at that in our Benchmarks section.

The graphics module used is a Maxwell-based NVIDIA GeForce GTX 960M 2GB GDDR5 mobile GPU. This is actually quite a modest GPU (as found in our review of the ASUS ROG G501 slim gaming notebook) so don’t be expecting to be gaming at quad HD or 4K resolutions on it. However, you should be able to achieve playable framerates at 1080p resolutions.

Our review unit of the GR6 was also equipped with a single 8GB stick of DDR3L-1600MHz SO-DIMM. As we mentioned earlier, the right side panel can be removed – just unlock the side cover lock, slide the panel toward the back, and lift – so we were able to take a peek at some of the actual hardware. 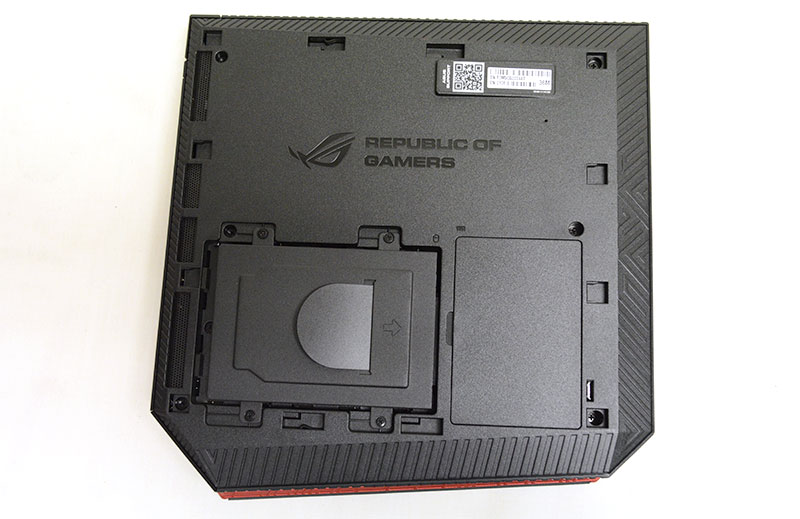 As you can see below, there’s space for an additional 8GB SO-DIMM module, so you’ll be able to upgrade your memory capacity to 16GB. 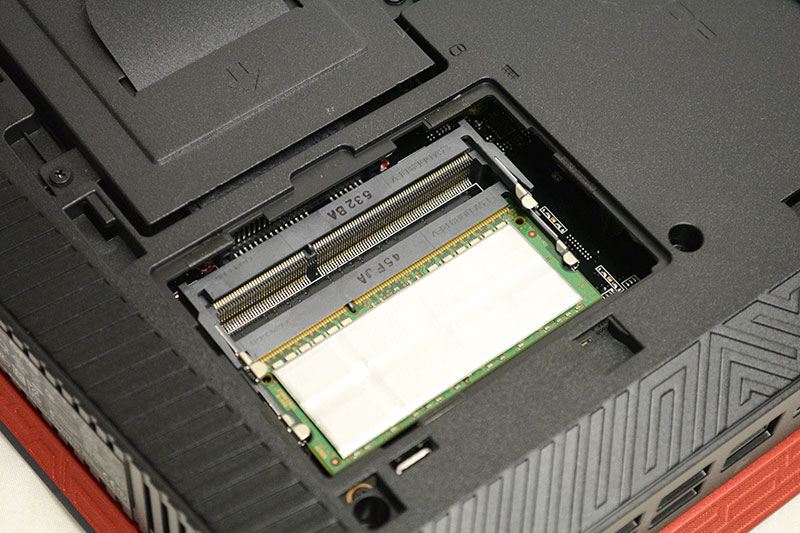 Our GR6 is also equipped with a 1TB mechanical hard drive for main storage. The GR6 supports an additional SATA based 2.5-inch SSD or HDD in the extension bay beside the SO-DIMM modules.

This drive is meant to be easily accessible, so you’ll be able to upgrade your storage configuration farther down the road. To access the extension drive bay, you’ll need to remove the four screws at the corners of the cover and pull on the flap to detach the lid. 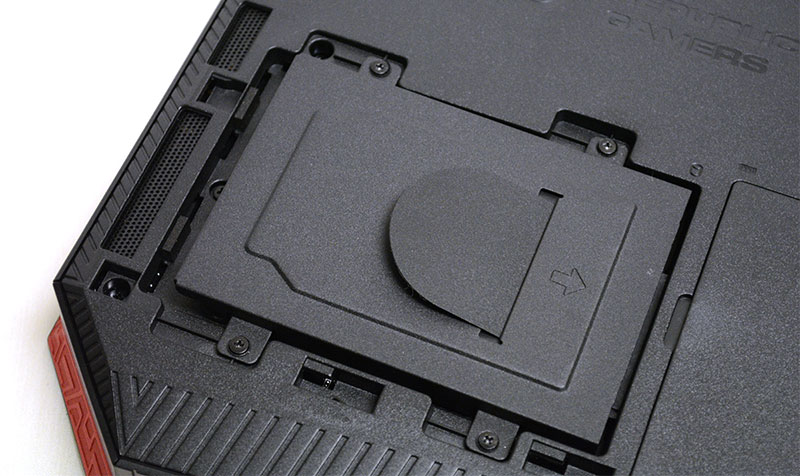 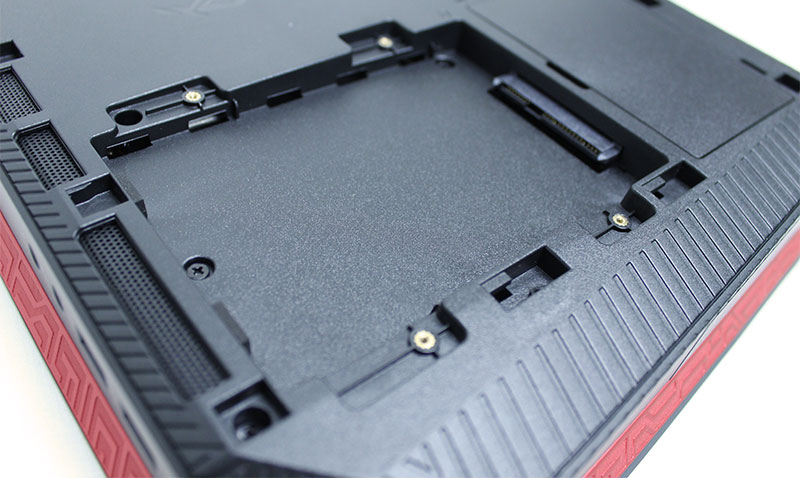 Finally, the ROG GR6 is powered by a 120-watt power adapter. The power brick itself is actually quite big, especially when compared to the diminutive GR6, so that’s something to consider if you’re planning to move around often with the machine. 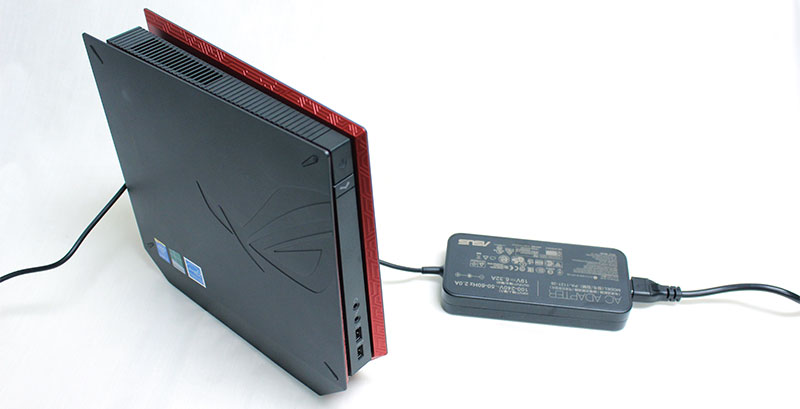 ASUS wraps things up with a bundle comprising an ROG Gladius 6400dpi optical gaming mouse and M801 gaming mechanical keyboard. The shape of the Gladius is reminiscent of the Razer Mamba, with a contoured side profile for a more ergonomic grip. We also really like the red Cherry MX switches on the M801 keyboard. This is quite a high-quality package, which adds good value to the entire system. 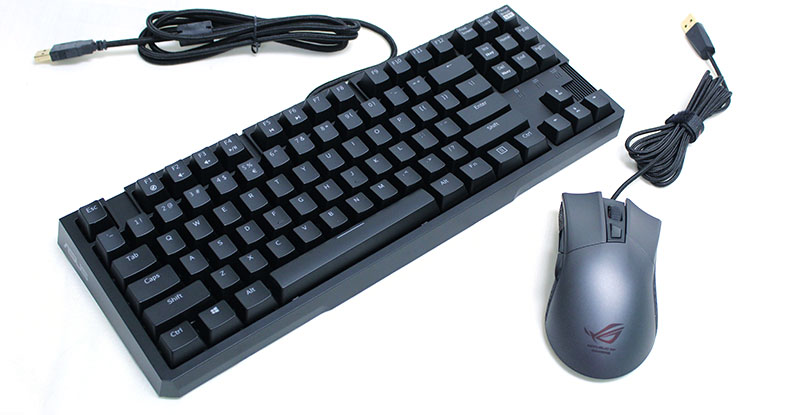