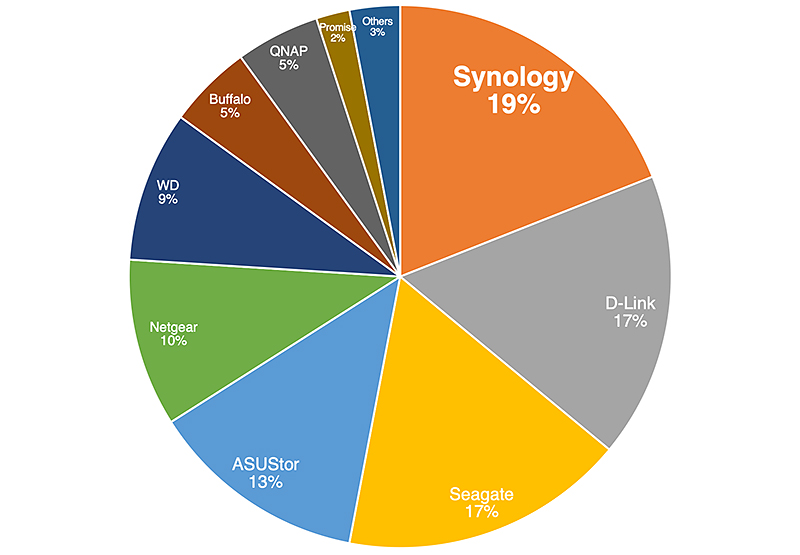 It’s a tight race here but Synology eventually emerged victorious in this Readers’ Choice category for Best NAS Brand, with 19% of the votes. Like clockwork, Synology announced a variety of NAS products in 2019 to satisfy different usage needs. Early in the year, we saw the DiskStation DS1019+ (5-bay) and DS2419+ (12-bay) for home users and growing businesses; and then months later, the DS419slim, a small 4-bay NAS, arrived to the delight of many home users and road warriors. After a few more data management products for IT pros came the DS120j, a compact 1-bay NAS for individuals with relatively simpler needs. Synology has wasted no time in 2020 either: the DiskStation DS420j, a 4-bay desktop NAS that supports cross-platform file syncing and sharing, was announced just this January. We expect the race to be tough again next year as D-Link (17%) and Seagate (17%) are not far behind in the vote count. 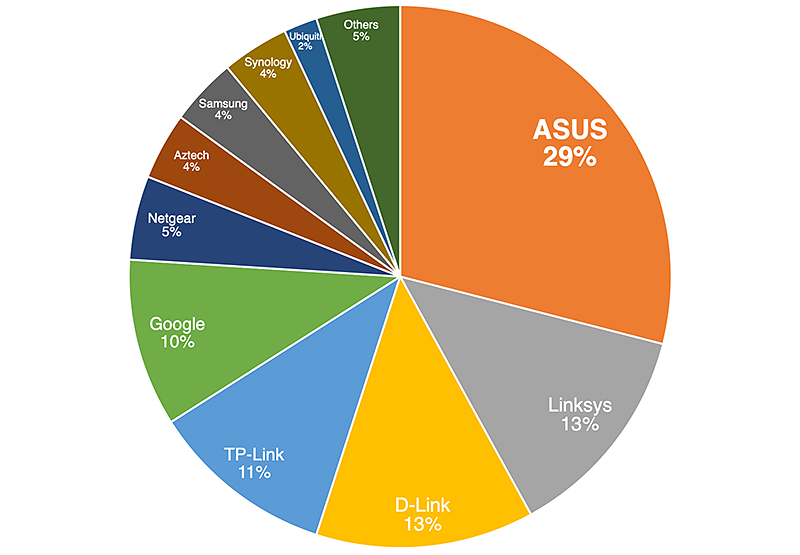 With 29% of the votes this year, ASUS has now captured this Readers' Choice award for Best Wireless Networking Brand for seven straight years. 2019 (and we expect 2020, too) was all about mesh networking and Wi-Fi 6 (802.11ax); and as a leader in this space, ASUS obviously has new products that incorporate all this new tech — and then some. If you’re in the hunt for a Wi-Fi 6 router (read our guides here and here), the obvious one is the RT-AX88U, which is a dual-band AX6000-class wireless router that delivers a maximum data transfer rate of 1,148Mbps and 4,804Mbps on its 2.4GHz and 5GHz networks respectively. For gamers who care about latency, check out the ROG Rapture GT-AC2900, which is ASUS’ most affordable gaming router to date. This router also works with ASUS’ AiMesh, which means you can use it with compatible ASUS routers to create a seamless whole-home Wi-Fi system. For something more powerful, check out the tri-band ROG Rapture GT-AX11000. Also a Wi-Fi 6 router, the GT-AX11000 serves up to 1,148Mbps on its 2.4GHz band and up to 4,804Mbps on each of its two 5GHz bands. In second place with 13% is Linksys and D-Link. 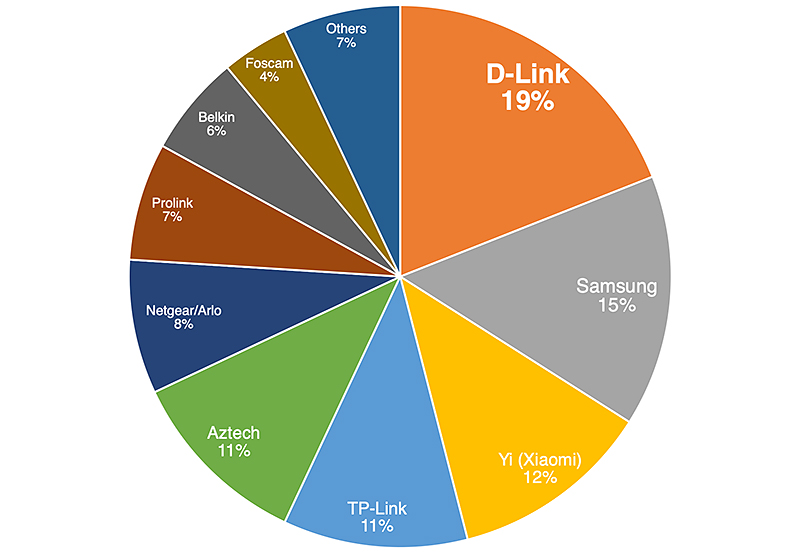 With 19% of the votes, this is the fourth straight year that D-Link has won our Readers’ Choice award for Best IP Camera Brand. After tackling the wire-free market with the premium DCS-2802KT kit earlier in the year, D-Link went on to launch the DCS-8515LH (720p) and DCS-8600LH (Full HD) cameras in 2019. A pan-and-tilt wireless camera, the DCS-8515LH supports auto motion tracking, has built-in mic and speaker for 2-way audio and works with Amazon Alexa, Google Assistant and IFTTT. On the other hand, the DCS-8600LH is an outdoor camera that’s IP65 rated and sees up to 7m at night. It too has 2-way audio and works with Amazon Alexa and Google Assistant. Followed not that far behind is Samsung, with 15% of the votes. 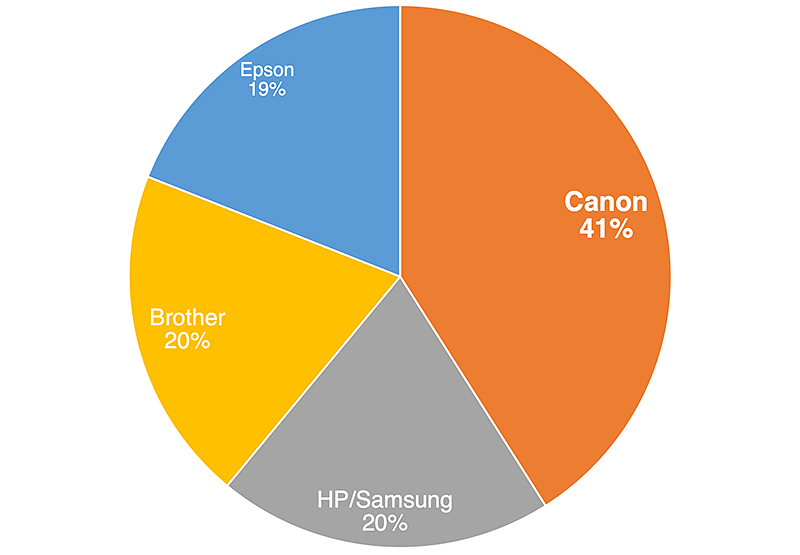 It looks like Canon’s printers have continued to delight our readers, as the Japanese printer and camera maker is the runaway winner of our Readers’ Choice award for Best Home Printer Brand, with 41% of the votes. Canon certainly launched a lot of printers last year, including the Pixma G7070, GM4070, G6070, G5070 and GM2070 ink tank all-in-ones and a slew of speedy Imageclass laser printers (both colour and monochrome models) that don’t break the bank. 2019 also saw the arrival of the iNSPiC series of pocketable instant camera and printer hybrids. 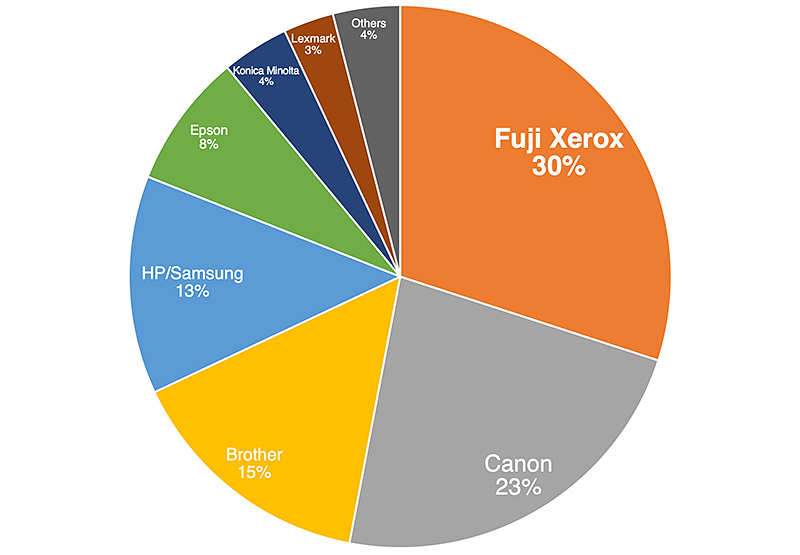 With 30% of the votes, our readers have chosen Fuji Xerox as their favourite office printer brand. In 2019, the company launched several monochrome printers designed for SMBs, including the DocuPrint M375 z multi-function model with a single-pass duplex scanner and the P375 dw single-function model that sports built-in Wi-Fi connectivity. Then there’s the DocuPrint 4405 series: consisting of three models, the 4405 is capable of A3 printing, can be connected to two separate networks and uses a Super EA-Eco Toner for reduced power consumption. Need to print in colour? There’s also the DocuPrint C5155 d, a high-end A3 colour printer with a super-fast 50ppm print speed. Of course, Fuji Xerox also makes high-end printers for enterprises that have very advanced needs or do very high-volume printing. Just this past November, the company launched no less than six new models in its ApeosPort/DocuCentre-VII C7788 multi-function printer series.