Note: This article was originally published on 15 April 2020. 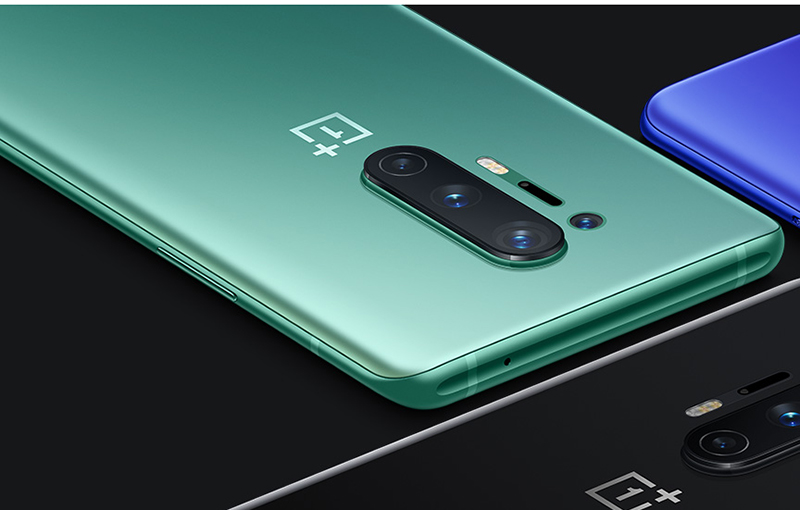 At the online launch on the evening of 14 April 2020, OnePlus wasted no time to introduce their new OnePlus 8 series mobile devices, which includes the OnePlus 8 and OnePlus 8 Pro. What stood out to us is how OnePlus stands ready to compete with other 5G-compatible smartphones even before the network takes off in earnest, having started and ended the online announcement with constant reminders about their 5G partnerships and two sharp-looking phones to boot. 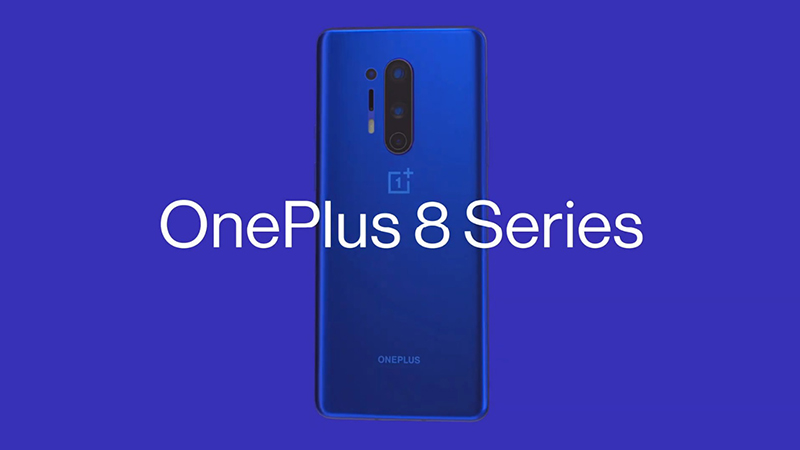 The OnePlus 8 Pro comes in a curved glass back, with the option of a matte-frosted look in new and bold Glacial Green (which looks like a cross between teal, aquamarine, and cyan), classic Onyx Black, and Ultramarine Blue.

It will have a 6.78-inch AMOLED display at an eye-melting 3,168 x 1,440 pixels resolution and 120Hz refresh rate, alongside its 1.07-billion colour reproduction - all significant improvements from the OnePlus 7 series. Sweetening the deal is its 240Hz touch sampling rate, giving the OnePlus 8 Pro its blazingly-fast responsiveness of just under 25 milliseconds. The OnePlus folks know that most online content isn't recorded at a native 120 frames per second, so they've built-in Motion Estimated Motion Compensated (MEMC) chip that'll help users get the most out of their 120Hz display. In essence, this is something better experienced with a phone on hand (hint hint, OnePlus).

The OnePlus 8 Pro will also have OnePlus's first-ever quad-camera system on the rear. In a nutshell, we're looking at a 48-megapixel primary camera, a 48-megapixel ultra-wide camera, a 3x zoom telephoto camera, and a colour filter sensor. In the video recording department, OnePlus packs the OnePlus 8 Pro with a hybrid stabilisation system (OIS and EIS), and three microphones for audio zoom capabilities (something that its rival flagships from Huawei and Samsung also have).

A special mention goes to the primary rear camera, as it uses a Sony IMX689 sensor that packs Sony's 2x2 OCL (on-chip lens) technology for Quad Bayer sensors, effectively a pixel-binning technique for higher quality images even in low-light situations. This is the same sensor found in the Oppo Find X2 Pro.

It's also 5G-ready thanks to the OnePlus 8 Pro's choice of mobile platform - the Qualcomm Snapdragon 865. As its premium flagship, it also packs a host of top-end components, such as UFS 3.0 built-in storage, Wi-Fi 6 compatibility, and dual stereo speaker with Dolby Atmos support. Truly new to OnePlus is the Warp Charge 30 Wireless, which makes it the first-ever wireless charging at 30W for the OnePlus. The company claimed that this wireless charging format enables the OnePlus 8 Pro to go from 0% to 50% in just 30 minutes of charging its 4,150mAh battery.

Over to the software: OxygenOS, the Android-based UI skin built by OnePlus, also received upgrades with 280 new optimisations altogether to make the phone feel smoother when browsing, a brand new dark theme, and dynamic wallpaper as a new feature.

We'll be honest - we thought we misheard when OnePlus said the OnePlus 8 model would also ship with a Qualcomm Snapdragon 865 chipset. Why create two models if they pack the same top-end processor? OnePlus wanted the OnePlus 8 to be huge on design while being as powerful as a 5G-ready flagship device with high-quality photography features built-in. This is unlike other phone makers where they ship phones with a mid-tier processor and hold their marketing department at knifepoint to carry the device across a proverbial finish line.

A key feature of the OnePlus 8's exclusive colourway - an iridescent, colour-changing rear called Interstellar Glow that makes the device eye-catching from all angles.

Hardware-wise, it packs a 6.55-inch display at just 8mm thickness and 180g, which OnePlus made a point to say how much slimmer and lighter the OnePlus 8 is next to the iPhone 11 Pro Max.

The front panel is a 90Hz AMOLED display rated at 2,400 x 1,080 pixels resolution with HDR support. A key difference from the Pro model is that the OnePlus 8 uses a triple rear camera system instead of of the Pro's four-camera system. The OnePlus 8 packs a 48-megapixel main camera backed by a Sony IMX586 sensor, with a 16-megapixel ultra-wide camera and a 2-megapixel macro shooting camera.

It's no slouch in the components side of things since it effectively shares the same 5G-ready processor as the Pro model. It also comes with UFS 3.0 storage, Wi-Fi 6 capabilities, and Warp Charge 30. What's noticeably different from the Pro version is the battery capacity (with the OnePlus 8 at a higher 4,300mAh), which is a likely tradeoff for no wireless charging on this device.

Update: Singapore pricing and availability of OnePlus 8 and OnePlus 8 Pro

The OnePlus 8 and OnePlus 8 Pro will be available exclusively on Lazada during its initial pre-order and launch period. From 24 April to 7 May 2020, interested buyers can pre-order the phones with a special pre-order gift bundle.

NEW: as of 22 April 2020, OnePlus will now bundle the following items pictured below with every pre-order of the OnePlus 8 or OnePlus 8 Pro. The bundle includes two phone cases, the 30W Warp Charge Adapter and cable, as well as the Bullets Wireless Z in-ear headphones that was also launched together with the phone. The pre-order bundle, together with the device, will come to users in a Pop-up Box. Stocks for the pre-order bundle are limited and are subject to availability.

Previously, the pre-order gift was just the charging adapter and cable, worth S$78. 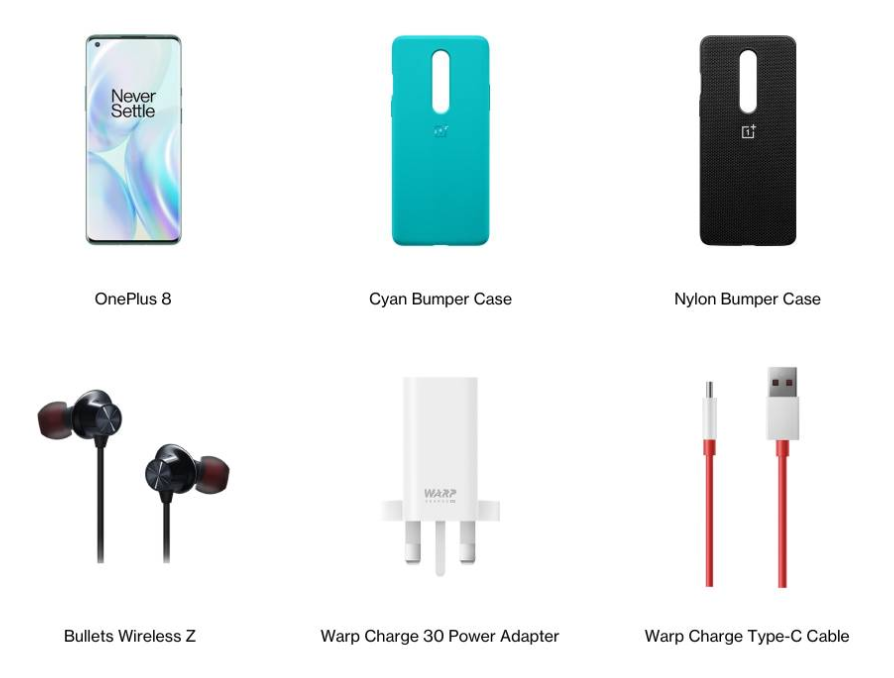 The OnePlus 8 and OnePlus 8 Pro will be available for retail from 8 May 2020 onwards. The smartphones are only available through Lazada for the first two weeks of launch.

The official OnePlus store on Lazada is here.

See below for the OnePlus 8 and OnePlus 8 Pro options and prices:

Join HWZ's Telegram channel here and catch all the latest tech news!
Our articles may contain affiliate links. If you buy through these links, we may earn a small commission.
Previous Story
Samsung launches Galaxy Tab S6 Lite in Singapore at S$598
Next Story
iPad app downloads and spending surged in Q1 2020 due to Covid-19 pandemic