Xiaomi is a four-year-old phone maker from China and its smartphones are immensely popular among consumers in China, Hong Kong and Taiwan. The company regularly organizes "flash sales" of its smartphones directly on its website or though partnerships with social networking sites/apps, where batches of 10,000 to 300,000 units are usually snapped up in minutes.

The company may not be known outside of China yet, but it made international headlines last year when it hired Hugo Barra to be in charge of its global expansion. Barra was the vice president of product development for Android at Google. This year, Xiaomi is making Singapore its first international stop where it will begin selling the Redmi smartphone and its accessories on its website from 21 February. The three telcos are also in discussion with the company to sell its phones.

In a market dominated by Apple iPhones and Samsung Galaxy smartphones, does Xiaomi stand a chance with the Redmi? Well, let's find out in this review. 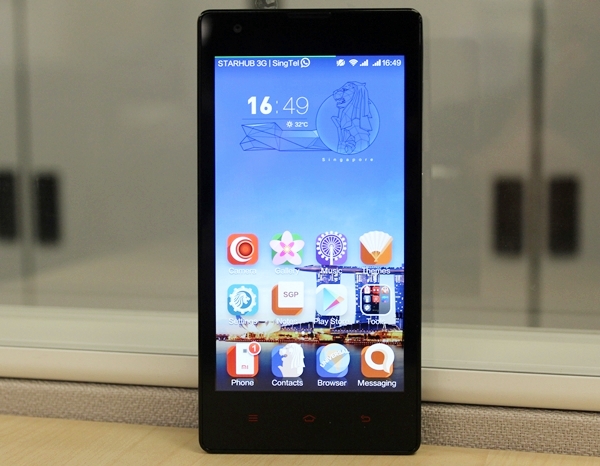 The Redmi looks like the typical Android smartphone with a rectangular design and rounded corners. Like the Motorola Moto G, the Redmi is built using two different plastic finishing- glossy and matte. The glossy material is used for the edges of the phone while the matte finish is actually on the removable back cover.

It's a wise decision on Xiaomi's part to use a matte material for the back cover since it helps in the handling of the Redmi and fingerprints/smudges do not look as obvious. There is a slit at the bottom right corner of the device where you can use your finger to pry open the back cover. Once the back cover is off, you will see three slots above the removable battery.

The first slot on the left is the microSD memory card slot which supports up to 32GB memory cards. The next two slots are the normal sized SIM card slots. Yes, this inexpensive Xiaomi Redmi is a dual-SIM smartphone. While both card slots accept SIM cards with data connectivity, only the left slot supports 3G mobile data while the right slot is rated for 2G data connectivity. According to Barra, this setup is designed for power efficiency since it's unlikely someone requires both SIM cards with high speed data connectivity. Often the secondary SIM card is relegated to making calls and as such, this design choice makes sense - more so for a phone of its price point.

The Redmi supports dual-standby, which means both SIM cards can receive calls and text messages at the same time. This dual-standby feature marginally consumes more power than if it only supports one SIM card at any point in time. Fortunately, the clever data connectivity speeds set for the left and right SIM cards as mentioned above, do help balance out power requirements. Note however that unlike more modern devices that use micro and nano sized SIM cards, that Redmi only accepts the traditional sized SIM cards for maximum compatibility no matter the market and geography. It's much easier to use an adapter to size-up the SIM card rather than having access to a cutting tool should you get a standard sized SIM card from emerging markets. 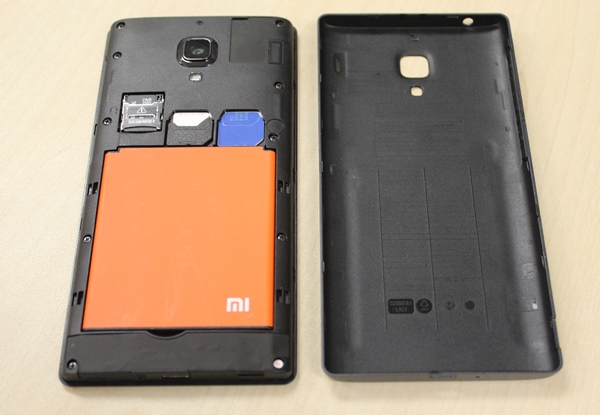 Like most Android smartphones, the Redmi uses the standard three capacitive navigation buttons. The phone will appeal to right-handed users as the back button is located on the right side. Considering that the Redmi isn't very big to begin with, left-handed users should have no problem stretching their left thumb across to reach for the back button.

It's odd that that there is no backlight for the buttons. This means that you probably need to rely on familiarity of the layout if you are using the Redmi in a poorly lit environment or in the dark. There is a small LED notification below the home button where you set it to light up in any of the 7 colors (blue, red, yellow, green, cyan, white and violet) for notifications, calls and messages. 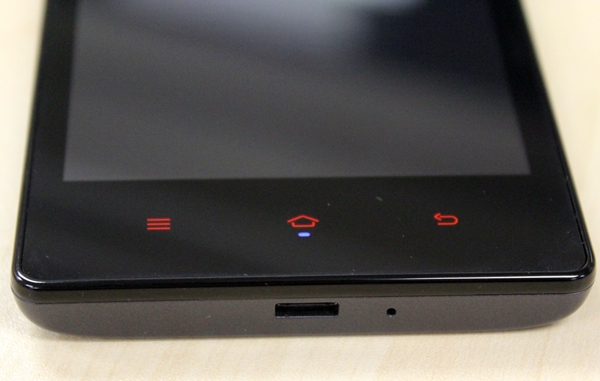 Xiaomi and other Android vendors should consider adopting LG's strategy of allowing users to customize the layout of the navigation buttons on the G2 and G Flex. However, they first have to ditch the concept of physical, capacitive buttons before embarking on this. Nonetheless, the lack of customized button layout is hardly a deal breaker as it depends on individual preferences.

When we held the Redmi in our hands for the first time, we were taken aback by the heft of the device. Weighing at 158g, the Redmi is heavier than most phones of its class. For example, the 4.5-inch Moto G weighs 143g while the 4.7-inch Lumia 625 weighs a tad heavier at 159g. Depending on how you see it, the Redmi can come across as giving a solid feel in the hands or being a little too dense for its size..

The Redmi comes with a 4.7-inch HD (1,280 x 720 pixels) display which is reinforced with Gorilla Glass 2. At this screen size, the Redmi has a pixel density of 312ppi. Here's a quick comparison of the screen size, display resolution and pixel density from the competition:

Although it didn't top the charts, the display of the Redmi is still splendid. Colors are bright with images and text appearing sharp. The bezel is a little thick, and we wonder if Xiaomi could have made use of the extra bezel to fit a bigger display. 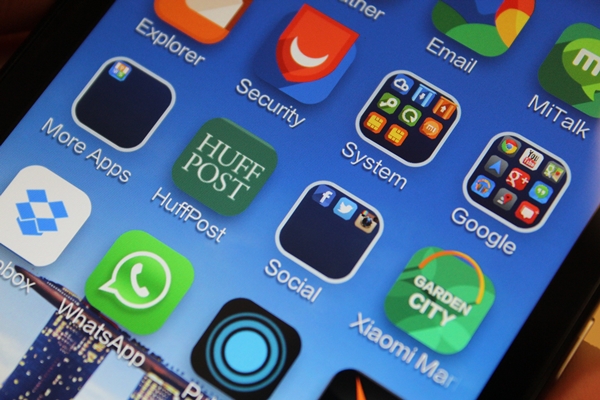 Xiaomi is offering a range of accessories for you to purchase at launch. They include a spare battery, battery charger, clear/matte screen protector, and soft gel protective case in five colors (yellow, black, rose, white and blue).

There is also an accessories bundle consisting of a clear or matte screen protector, a spare battery, a battery charger and a colored protective case of your choice, which costs just S$28.00. Here's a breakdown of the retail prices of the various accessories which are very affordable in our opinion: 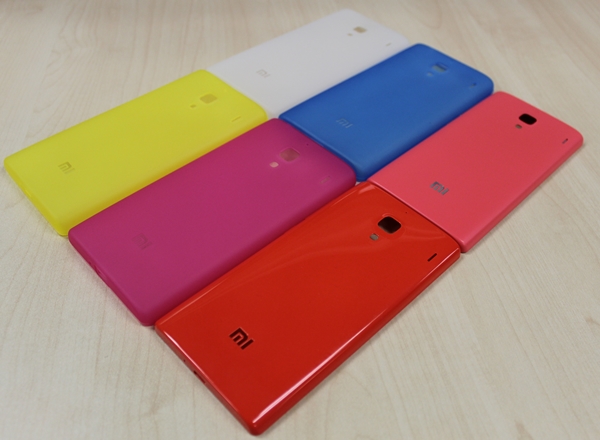 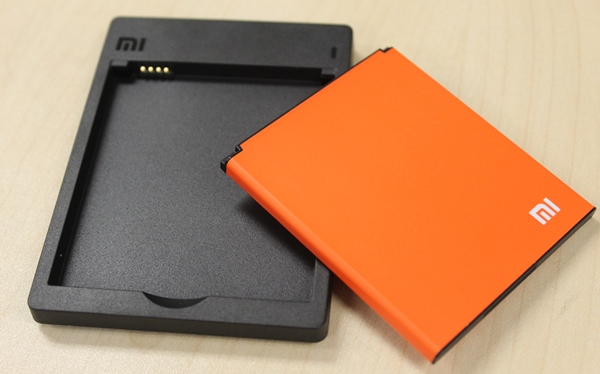 According to Barra, MIUI started as a pure software effort at Xiaomi to build an alternative ROM for Android. So, what is an Android ROM? ROM, also known as Read-Only Memory), is a firmware containing the operating system (OS) and basic applications to make a device work. To put this into context, let's use Apple iOS and Google Android as examples.

Apple controls the development of its ROMs for the iPhones and iPads, and it usually updates the ROM several times in a year to fix bugs and improve performance. On the other hand, Google Android is an open source platform where developers are free to develop custom ROMs based on the source code. This is why you see Android vendors coming up with different ROMS such as HTC Sense, Samsung TouchWiz and LG UX.

MIUI is one of the most popular Android ROMs in the world; the current MIUI V5 is based on Android 4.2.2 Jelly Bean and is used by over 35 million users worldwide. Xiaomi has added a lot of features to the framework, system interface and done a lot of work at the application level, which allows advanced users to have maximum control over their devices.

At this juncture, some of you may start to wonder what is the difference between customized Android ROMs and a third party launcher with themes. As mentioned earlier, the ROM encompasses everything from the OS to the apps to the services on a device. A third party launcher is basically an app that you can download from the Play Store to change the general look and feel of the device, but it usually has limits to the level of attention and detail that can be applied.

There are a handful of popular third party launchers such as Nova, GO Launcher EX, Apex and Buzz where you can change the looks of the icons, folders and the overall theme of your interface. There is even a launcher developed by Xiaomi for other Android users to try. It is called Mi Launcher and supports devices running Android 2.3 and above.

You can load a Sense ROM onto a Nexus device to give it the looks of a HTC phone. In addition, you will have the exclusive features of HTC Sense such as BlinkFeed. However, running a third party launcher on the Nexus device only allows you to customize its looks to be that of a HTC or Samsung phone and even an iPhone. Beyond the cosmetic modifications, it is still a Nexus device running a stock ROM. The device will not gain extra features such as Smart Stay and Multi-Window in the case of a Samsung TouchWiz ROM.

To get a good sense of the difference between a native custom ROM implementation and that allowed by a launcher app, we loaded some themes on the Redmi device and compared it to that of a Samsung Galaxy Note 3 running the Mi Launcher with the same theme:-

Xiaomi claims that there are over 200 features or functions in MIUI V5, and more features will be added in the near future. Its software engineers are encouraged to interact with MIUI users in forums to gather feedback. Based on the feedback, MIUI will incorporate the most requested or useful features into the next software update which is released every Friday.

We were told by Barra that the weekly updates are for "beta users" who need to opt-in. These users form about 10% of the MIUI community and they decide when a particular firmware is ready for release to the masses. Normal consumers are automatically opted into the "Release" track where they will receive system updates every one to two months.