Note: This review was first published on 15 November 2021. 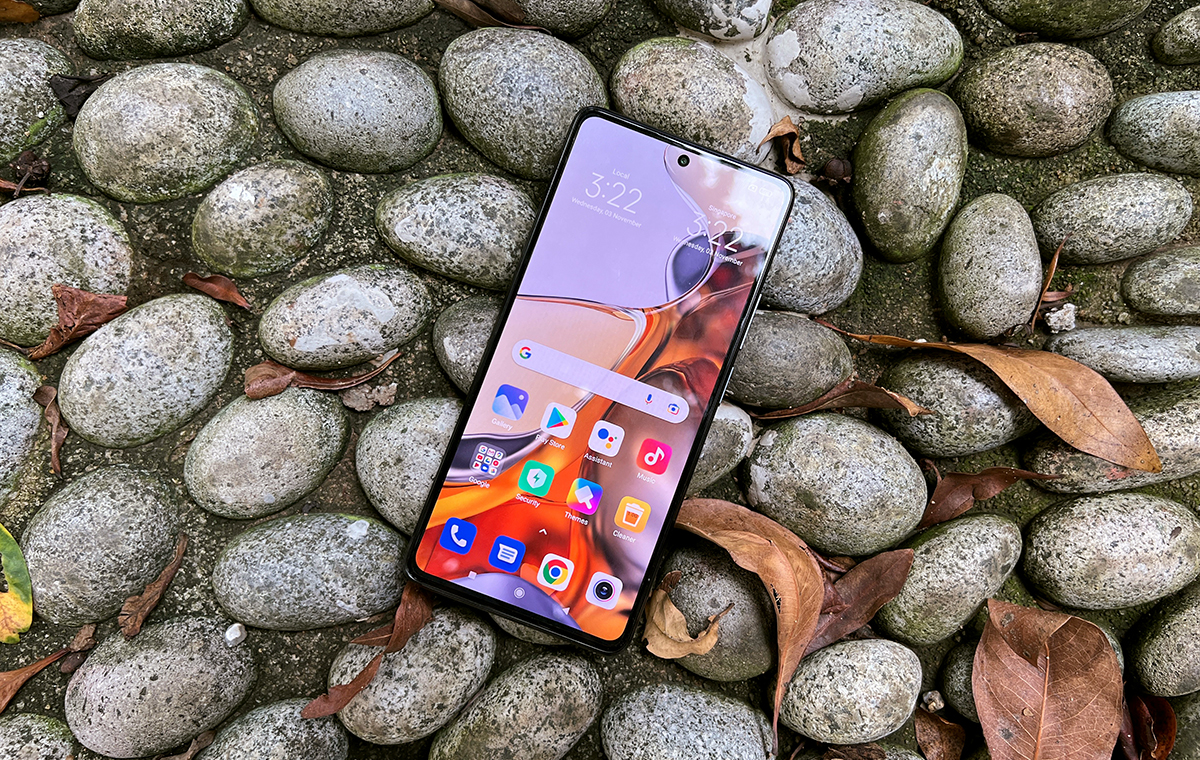 How cheap can a 'flagship' class phone go?

We start with its S$799 (12GB RAM + 256GB storage) retail price. That's already S$200 lower than the Mi 11's launch price, and yet the Xiaomi 11T Pro still comes with a Qualcomm Snapdragon 888 chipset. In return, you get a lower-rated 1080p display using the same 20:9 aspect ratio, you lose wireless charging, but you still get IP53 water resistance instead of the usual IP68 certification on flagship-grade handsets. Xiaomi also made sure you didn't feel shortchanged with a ton of perks.

The newer 11T Pro boasts a bigger battery (5,000mAh) and crazy-fast 120W wired fast-charging. It uses a slightly different triple rear camera configuration (108MP + 8MP + 5MP), but has the same functions (primary, ultra-wide, telemacro lens). The AMOLED display gets a bump of its touch sampling rate to 480Hz, on top of its 120Hz display refresh rate.

If that's not enough, the 11T Pro sets itself apart from its predecessors with its 'cinemagic' features, which Xiaomi says makes pro-grade-like filmmaking easier.

Would its aggressive price point help us forego the few specs it toned down from the previous Mi 11 model? Is it truly as 'cinemagical' as it claims to be? What else are we giving up to get one of the most affordable Snapdragon 888 powered phones in town? Let's find out. 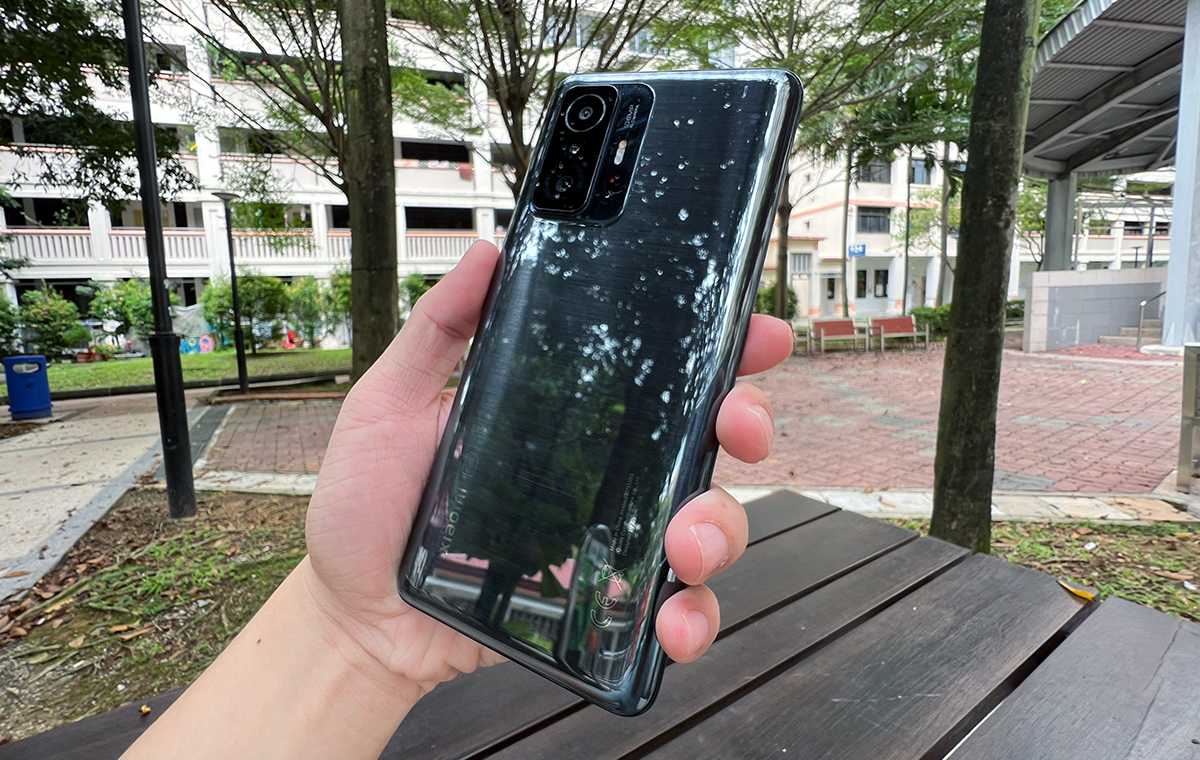 Xiaomi 11T Pro's design is a slight refinement from its predecessor, the Xiaomi Mi 11. In essence, Xiaomi kept the physical elements that worked for its flagship-grade handsets. It shares the same OnePlus-like rounded rear edges and sides, with a high-polish plastic back.

If we liked one improvement, that would be the 11T Pro's rear camera housing. In fact, it looks almost like a Huawei P40 Pro from behind. 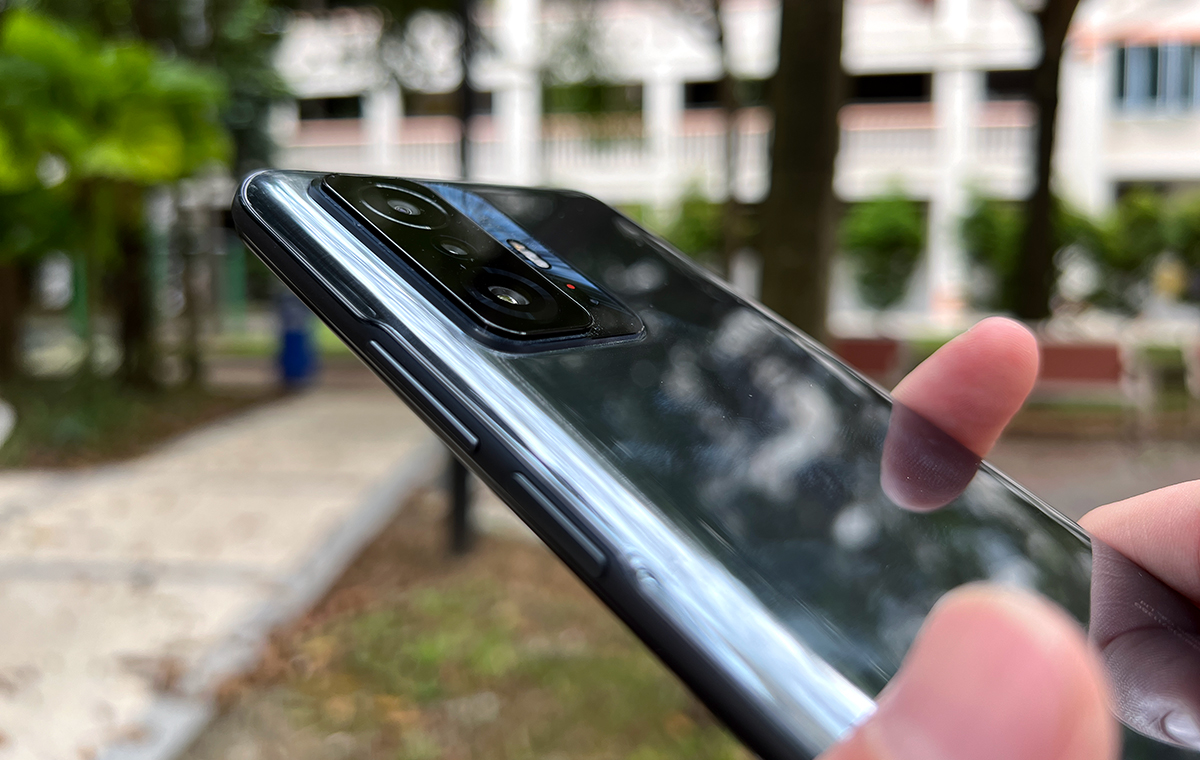 Both the Xiaomi Mi 11 and Mi 11 Ultra had distinct, yet unwieldy rear camera housings that did no justice to the phone's overall practicality. Instead of reusing their humpbacked look, Xiaomi 11T Pro's camera housing is slimmer than what you'd normally see on Huawei's earlier P series handsets. It's a clean nook, with cameras flushed, and it helps make the 11T Pro look a little less cobbled together. However, we do expect higher attention to detail for the best of what Xiaomi currently offers. 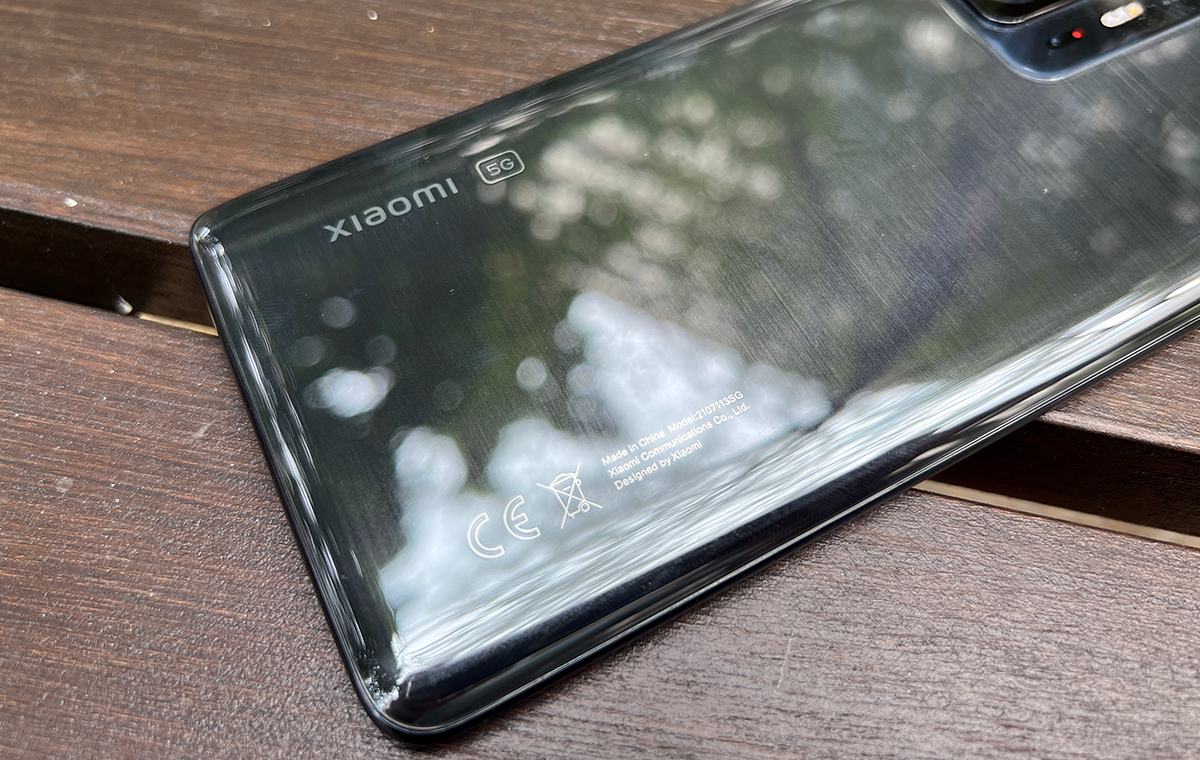 Unfortunately, the phone still comes with excessive regulatory and warning labels that can't be removed, which really made us wish that the provided phone case in the box was opaque, instead of its traditional transparent protector. 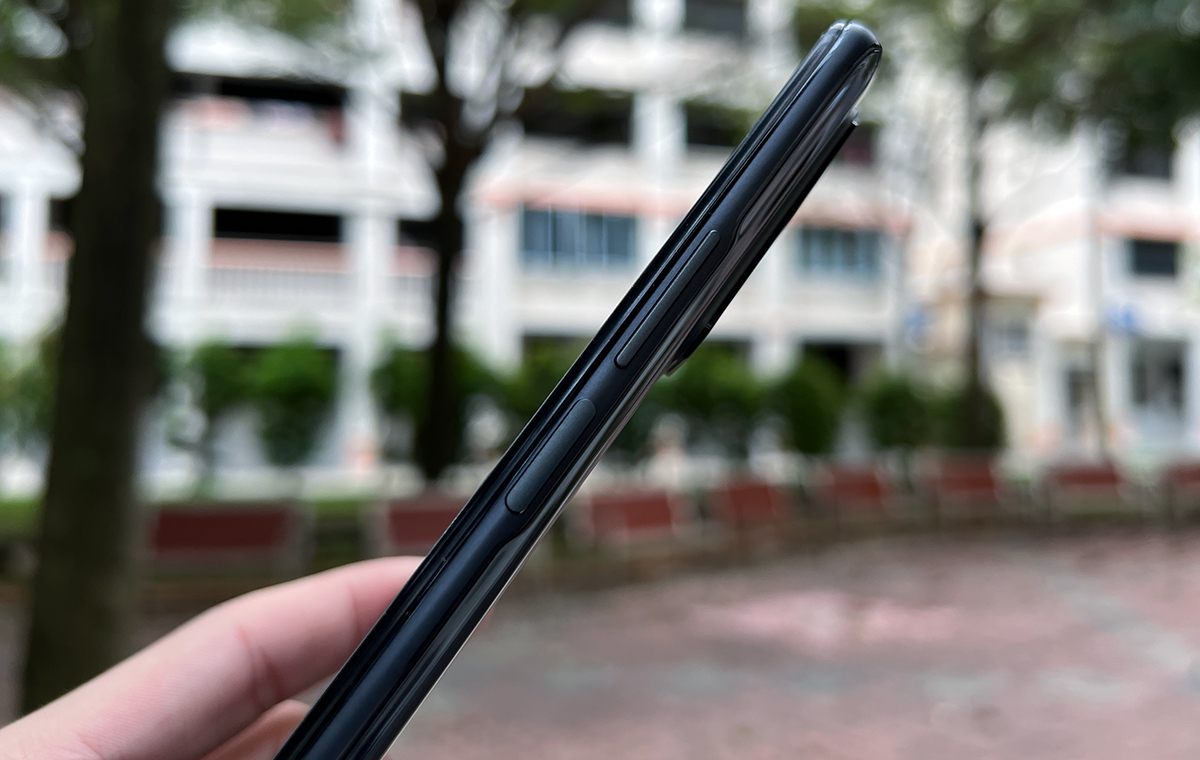 As a "Pro" Android phone, 11T Pro is 76.9mm wide and 164.1mm tall, falling within the 'standard' size for phones of its class. For reference, it's about the physical size of a Samsung Galaxy S21 Ultra, but with a 6.67-inch screen instead of a 6.8-inch panel. Xiaomi also opted for a rounded volume rocker and flat power button, so it's easy to tell where your keys are without needing to glance at them. Beyond that, the phone's ergonomics isn't better or worse than most other China-made alternatives. 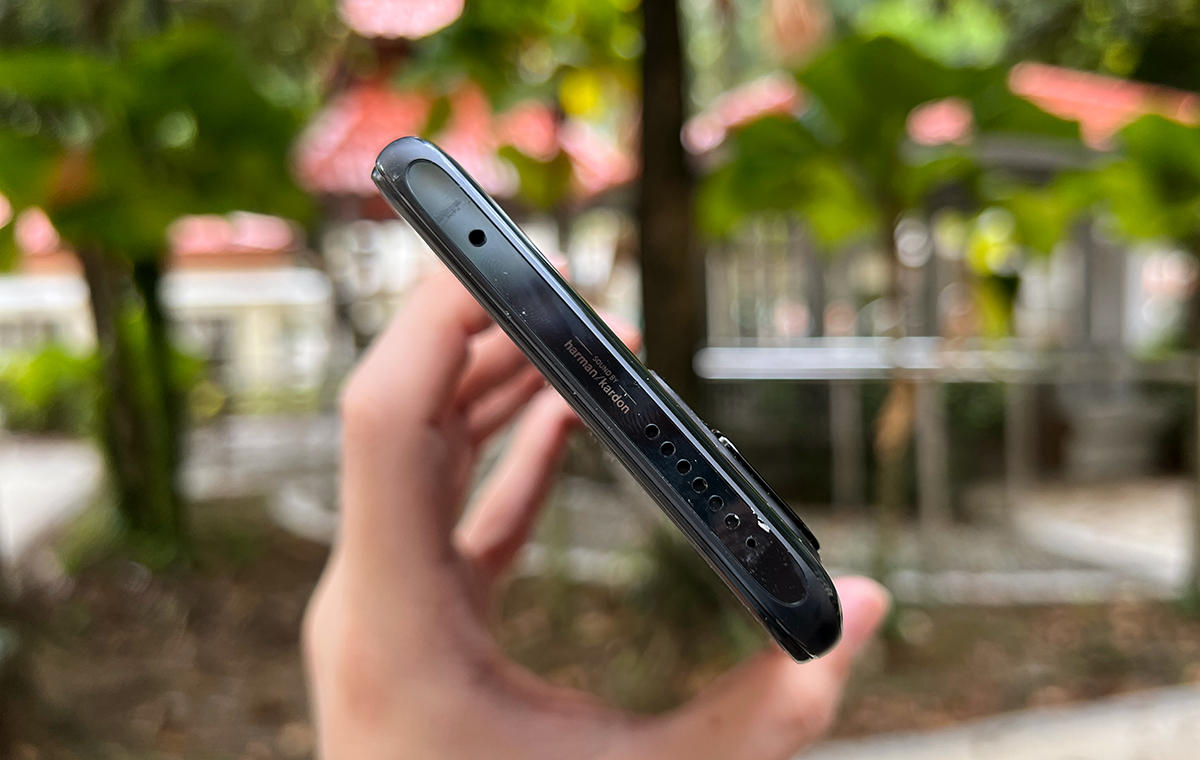 A subtle yet appreciated design point is the 11T Pro's built-in speaker placement. Xiaomi tried its best to ensure that both stereo speakers are placed on opposite ends of the phone, making it less lopsided than many other Chinese-designed handsets. 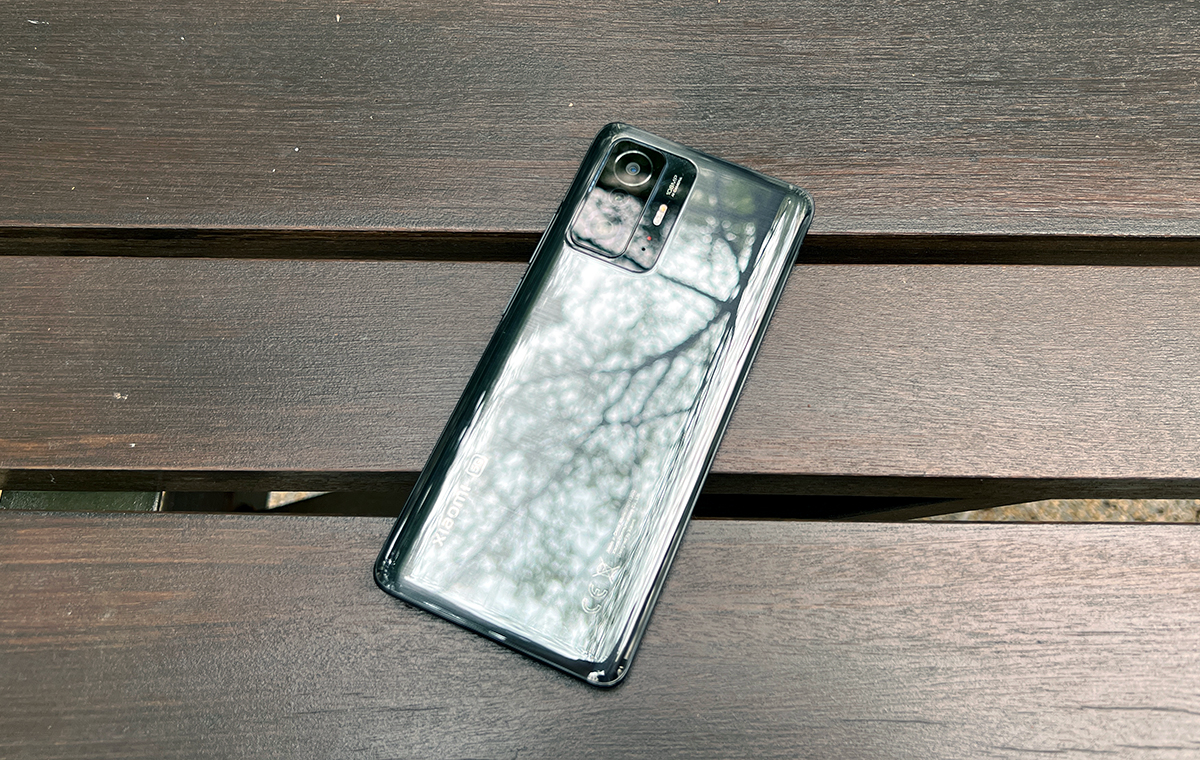 Surprisingly, the 11T Pro is not waterproof (only certified splashproof at IP53), which we felt was a much-needed feature that could've given its design and flagship positioning a little more weight. Nevertheless, it's still nice to know there's some water resistance for its reduced price point. 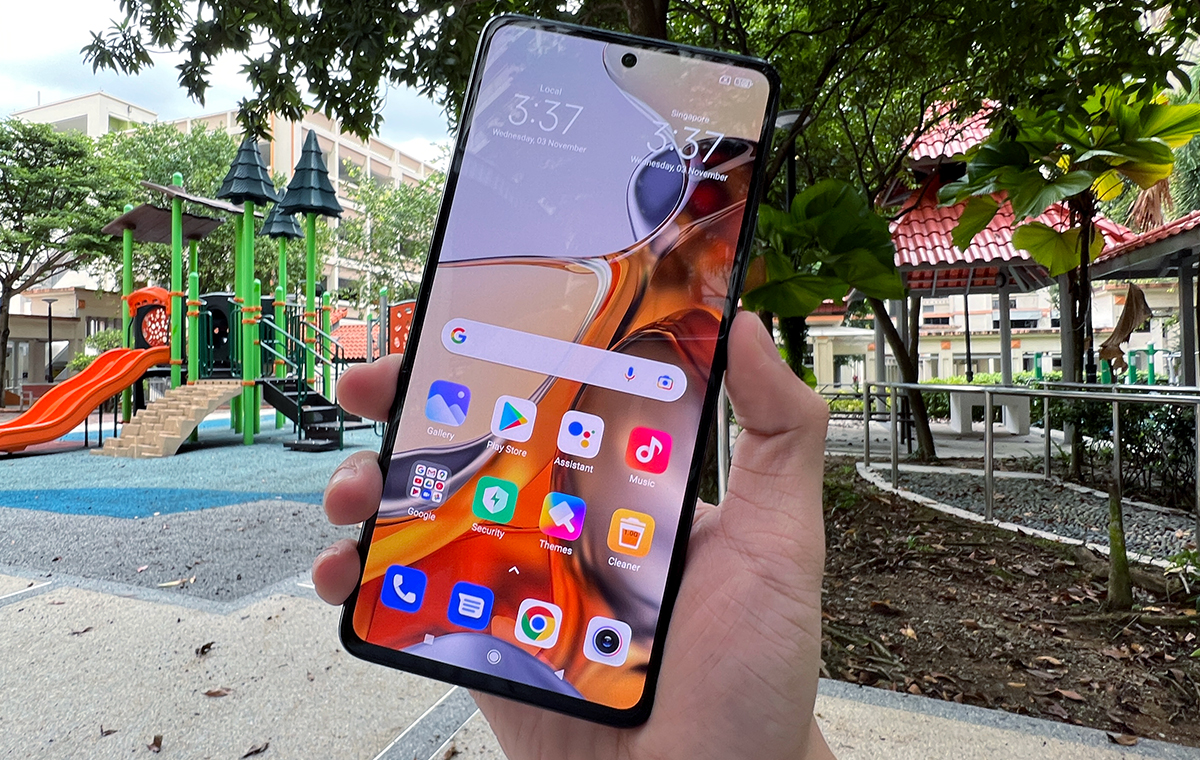 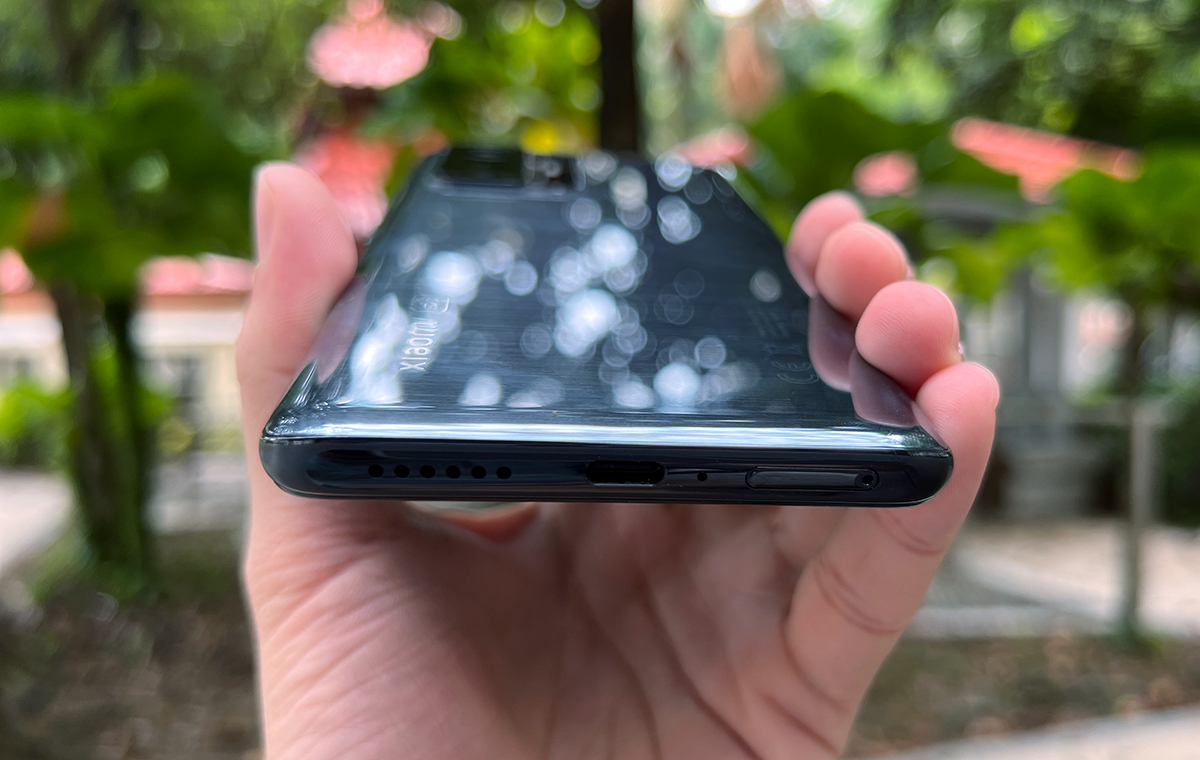 In the audio department, Xiaomi 11T Pro delivered unexpectedly impressive audio quality through its built-in speakers. With both speakers pointing in opposite directions, the 11T Pro offered a stereo sound stage and quality that exceeded not only most handsets but even some phones well above its price point. It's also one of Xiaomi's better-sounding mobile phones so far.

It offers a well-bodied sound signature leaning towards high mids and with punctuated basslines. Where it falls short is audio separation, trailing off at lower volume levels. The volume control does not sound uniform either, with the first 75% incremental, and any tweaks above the 75% mark being a massive step up in loudness. 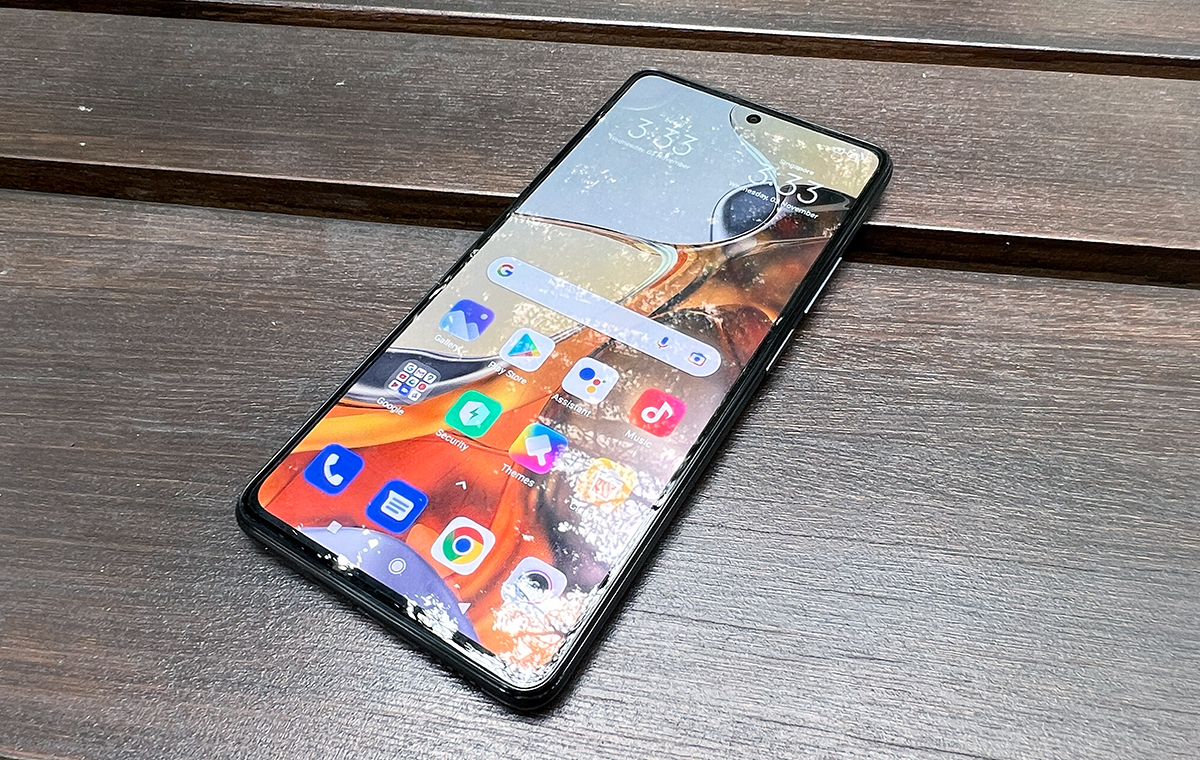 Xiaomi 11T Pro comes with MIUI 12 out of the box. The reskin is based on stock Android 11. So, you're not going to get new Android 12 features until a future firmware update (if it ever comes).

MIUI 12 can feel a little unintuitive initially since Xiaomi tucked related core settings in separate categories (e.g. not all display-related settings are under Settings > Display). Also, the phone's default settings don't take full advantage of its hardware and software features by default. You'll need to comb through your configuration to enjoy things like 120Hz refresh rate and its AI Image Engine.

We're in two minds about Control Centre's interface. The full-screen look makes it easy to check more notifications in one glance, but the extra swipe to find Airplane Mode, Bluetooth, and Brightness feels clumsy. Fortunately, Xiaomi still offers the old Control Centre style with both settings and notifications available in a single pane, but you'll need to enable it within Settings.

MIUI 12 (global version) is also the first MIUI to properly ship with an App Drawer on boot (no additional installation required). To find it, you need to head into Settings > Home Screen > Home Screen and pick "with App Drawer" - this gives you the feature with an app search function at the bottom and app categories at the top.

What's remarkable is the ability to create your own "category". You can easily group your apps based on your needs (e.g. a food delivery category lets you park Grab and Foodpanda together, and a ride-hailing category lets you group the same Grab app, but with ComfortDelgro).

A major drawback in Xiaomi's new UI is its touch-and-go attitude towards app permissions. It seeks your app permissions like any other Android phone looking to access features like storage and microphone. However, the interface doesn't actually confirm if you agree or disagree with the suggested settings. It's easy to accidentally dismiss the notification when your taps stray outside of the permissions pop-up. The downside is that it's never certain about allowing or prohibiting permissions - you'll have to go back and double-check what the phone chose for you.

We've lost count of the number of times where we went back to Settings to ensure the app received the permissions we're comfortable with. The lackadaisical approach to such privacy settings tells us that such basic protections on the 11T Pro are an afterthought, and it's not something we recommend on any handset - whether it's flagship-grade, Xiaomi-made, or not.