Sony refreshed their Bravia HDTV suite earlier this year in March, where models like the HX855, NX650, and EX series were showcased during the press event held at the Marina Club. Instead of making radical changes, we noticed that Sony has decided to craft out subtle modifications to their line-up, such as the reworked SU-B553S Bunchin Stand (minus a center groove this time), as well as making minor cosmetic changes to their premium Bravia HX series. Among them is a newly minted D-shaped stand which we'll take a closer look in a jiffy. To get you up to speed, Sony's existing full-array HX925 model will retain its flagship crown in 2012, while the HX855 will be the next in line among Sony's upper-end series of HDTVs. Unlike the HX925, however, the newer HX855 screen will be illuminated by Sony's Dynamic Edge LED backlights. In other words, instead of firing a direct array of LED lights, this 3D TV is actually fitted with edge LEDs with dynamic 'cluster' dimming. It won't match up to a full-array configuration since it's only able to dim general areas of the LCD panel, but we'd still like to see how Sony pulls this one off on the HX850 series. 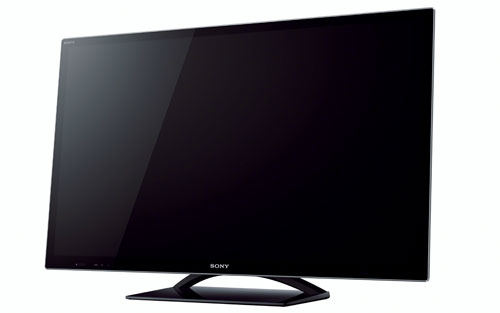 The HX855 is available in three display sizes - 40, 46, and 55 inches. And as you probably know by now, the 55-inch model is priced at a wallet-busting S$5,999. That's about S$3,400 more than the 40-inch variant! The mid-range 55-inch HX750 model, which costs S$4,699, is a much cheaper alternative, but do note that the HX750 does not carry a digital tuner or dynamic backlights. The HX750 also possesses a slower 400Hz MotionFlow rate (compared to the HX855's 800Hz rating), and isn't equipped with the HX855's contrast-boosting OptiContrast panel or toughened Corning Gorilla glass to withstand scratches and knocks. So, is Sony's swanky new HX855 worth paying the premium for? Will it give LG and Samsung a run for their money? Can it repeat the brilliant performance of its HX925 sibling, despite its design choice of using edge LEDs? These are big shoes to fill, but we hope that the Bravia HX855 wouldn't disappoint. After all, you'll be paying almost six grand for this Full-HD baby with 3D qualities, so it'd better be worth it. Read on for our detailed breakdown.