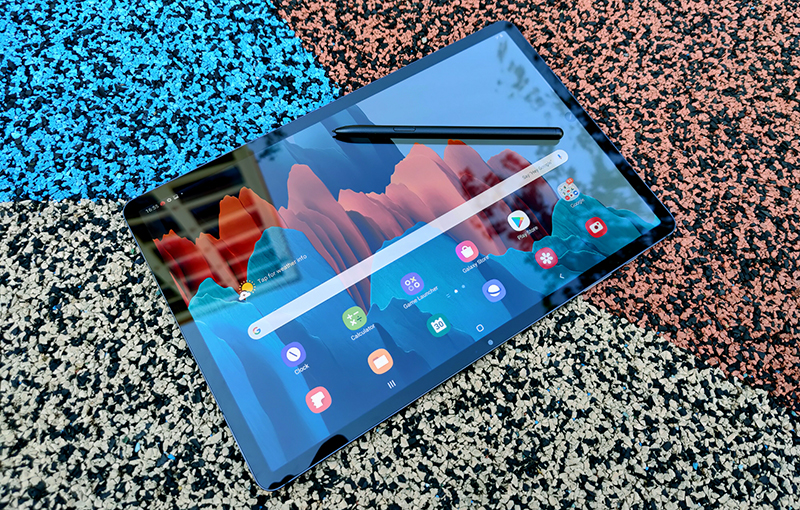 A productivity tool, or just a better Android tablet?

With Google abandoning tablet development and cancelling its future tablet releases, the Android ecosystem for tablets looks like it’s left to the wilderness. Any Android device maker will have to rely on their wits to create suitable workarounds and tools for the operating system to reimagine a coherent, seamless tablet for work and play.

Enter the Samsung Galaxy Tab S7+, which is the amalgamation of Android 10 on a tablet chock-full with Samsung’s iterative software that not only makes Android tablets a possibility, but further increases its value by making it a companion for productivity and personal use.

In essence, Samsung opted to hard-sell the Galaxy Tab S series’s productivity features, and the 12.4-inch Galaxy Tab S7+ is no different. Beneath this 5G-ready tablet is one of the latest flagship-tier processors (Qualcomm Snapdragon 865+), a massive five-figure 10,090mAh battery capacity, plus a stunning 120Hz Super AMOLED display paired with four AKG-tuned speakers. The Super AMOLED display isn't just for looks, as it also has in-display fingerprint sensor.

But Samsung didn’t stop there because they wanted the Tab S7+ to be a device that defines how we work on the go. The included S Pen got a huge latency reduction to 9ms for better response times. Multi-Active Window now supports three apps, instead of just two. Samsung Dex now works wirelessly with a Samsung smart TV. And these changes aren’t yet taking into account the several productivity partnerships Samsung has with note-taking and graphic design apps which we'll touch on later.

If the Tab S7+ feels too big for your needs, there's the lighter and smaller, 4G-ready Tab S7 model. It has an 11-inch LTPS TFT display with 120Hz refresh rate. They pretty much pack the same hardware and components, except for a smaller 8,000mAh battery and a fingerprint sensor built into its power button. Everything else, from the processor used, to the quad-speaker setup, down to its included S Pen, is on par with what the Tab S7+ offers. Samsung really wants you to have the full productivity and entertainment experience regardless of the tablet variant you choose.

It’s a lofty aspiration. We already know the Tab S6 couldn’t be a hardcore productivity tool because it’s an Android tablet, and we were totally fine with that. Still, as a tablet user who enjoys the display and form factor for entertainment and light work, I’m sure the Samsung Galaxy Tab S7+ still has a place. In our review, we’ll see how the Tab S7+ fares as an improvement over the last, how it holds up in benchmarks against Apple’s tablets, along with our general experience using the device. 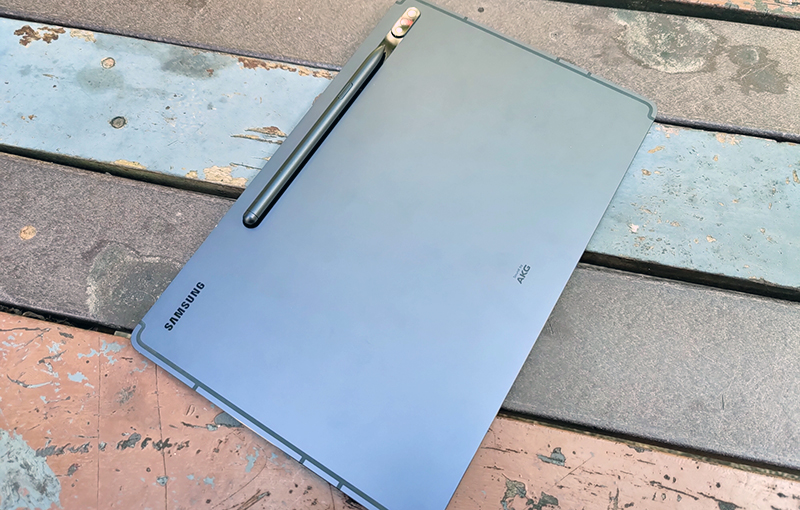 Samsung didn’t say very much about the Tab S7+’s design materials or choices, but the Tab S7+ is undoubtedly premium even at first glance. It uses a metallic finish on the rear, wrapped in an aluminium rim, and a uniform bezel around the display. It’s an industrial look with a modern stylisation that’s further expressed with a certain polish on an otherwise matte back. Evidently, it feels a lot more professional and sleek than Samsung tablets of old, which had rounded edges and curves.

What we liked most was how Samsung took the effort to make Tab S7+’s antenna lines pleasant yet generous. It stretches across both short sides, with the bands neatly framing the tablet to serve their purpose. 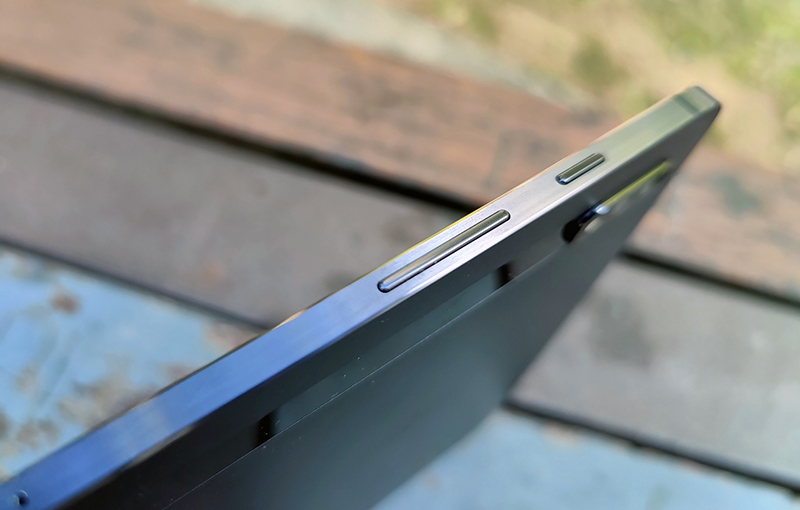 At 5.7mm in thickness, it’s just as slim as the previous Tab S6. The Tab S7+has considerable heft at 575g, thanks to a the larger 12.4-inch display, which is a first for Samsung's tablet lineup. It’s still lighter than the 12.9-inch iPad Pro (2020) by about 68g. If you liked how the bigger iPad Pro felt in your hands, the Tab S7+ would feel just at home. 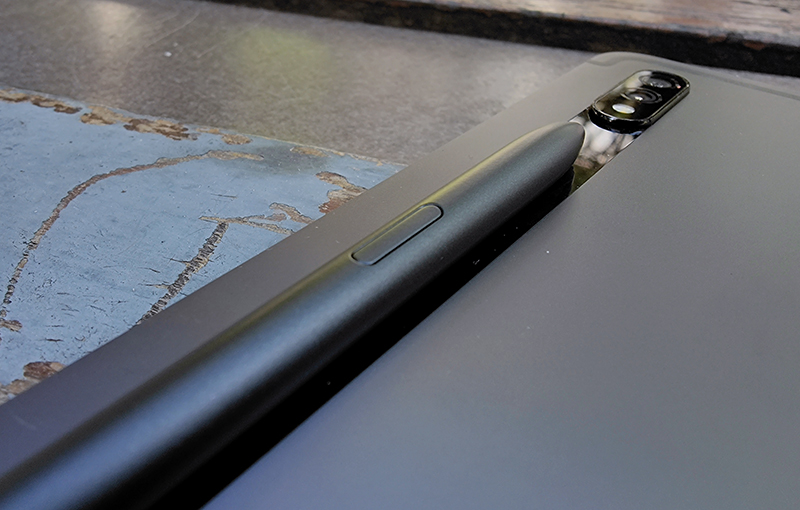 Is the design and handling perfect simply because it feels like a premium tablet? Not exactly. I question the location for the S Pen’s magnetic rest. It sits a little awkwardly below the rear camera, which introduced compromises in storing the S Pen securely and other handling constraints. We'll touch more on these in our S Pen section. 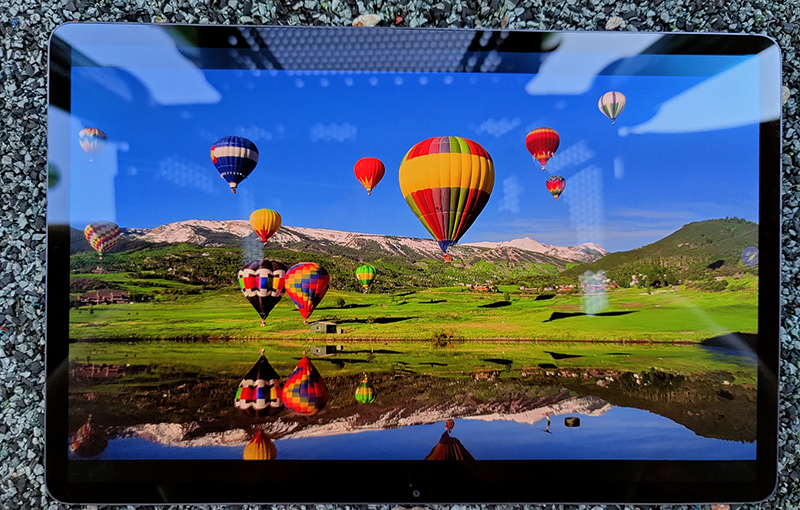 The main draw of the Samsung Galaxy Tab S7+ is its new 12.4-inch, 16:10 aspect ratio Super AMOLED display rated at 2,800 x 1,752 pixels resolution (WQXGA+) with 120Hz refresh rate. It works out to a pixel density of ~267 PPI. The display feels sharp and smooth despite its sub-300 PPI pixel density, largely due to the 120Hz refresh rate that makes for fluid scrolling and viewing. Super AMOLED panels, especially Samsung’s, tend to deviate towards warmer colour temperatures, especially when the Tab S7+ comes with Low Blue Light certification from SGS. We had no issues - the Tab S7+’s colour temperature is not overly saturated, and it was equally proficient in playing dark, gritty shows off Netflix or 1,440p @ 60 FPS music videos off YouTube. 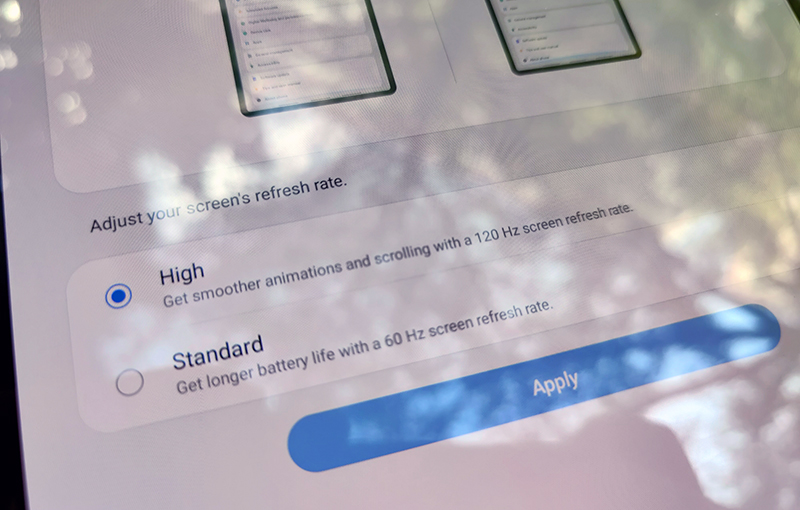 Sometimes, it’s not necessary to use the entire display real estate for content, which is why there’s Multi-Active Window on the Tab S7+. The ability to run multiple apps side-by-side simultaneously is not a new feature to tablets or phones. However, Multi-Active Window on the Tab S7+ supports up to three apps in a variety of orientations. While I personally have no use for more than two apps at once, making it work with three apps is a welcome addition nonetheless. It’s great for folks who are online shopping during a Zoom meeting with your email inbox open for any emergencies (you didn’t learn this here), among other niche-use scenarios. 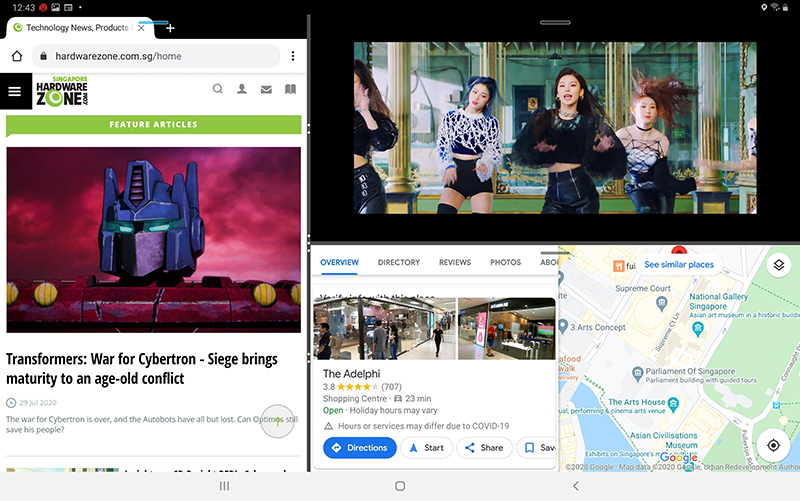 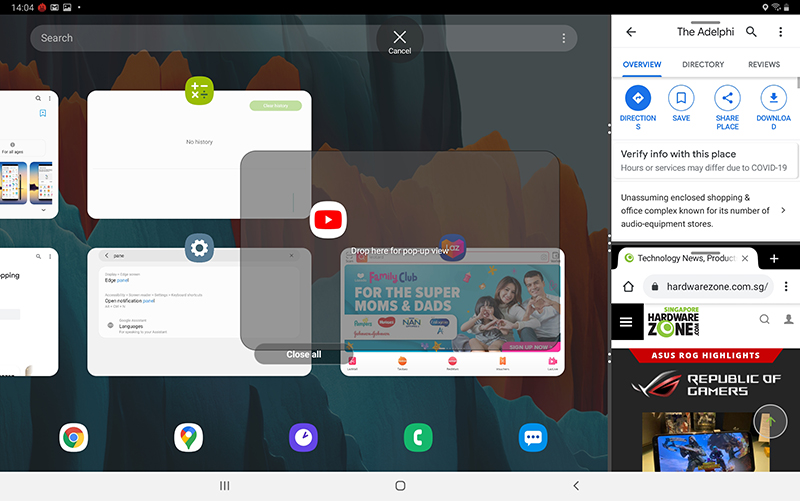 To get a new app combination going, you will first need to open all three apps as they are. After that, you’ll need to hit App Overview (that’s the standard Android button where you see all inactive apps at once). Using your finger, you need to hold down on an app until it pops out, allowing you to drag it to the middle of App Overview for a “drop here for pop-up view” option to appear. You will then need to tap on a thin blue line at the top of the app window to bring up a command that parks the app in a quadrant. Repeat that three times, and you’ll have three apps running simultaneously. 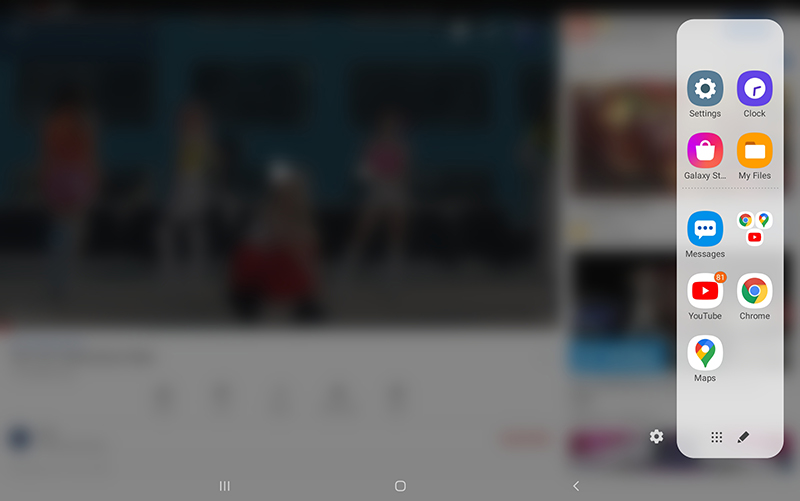 If you don’t wish to go through your entire App Drawer to look for apps, park them in the Edge Panel for easier access. With one app open, you’ll need need to hold and drag the app out into the quadrant where you wish to place the app window in. 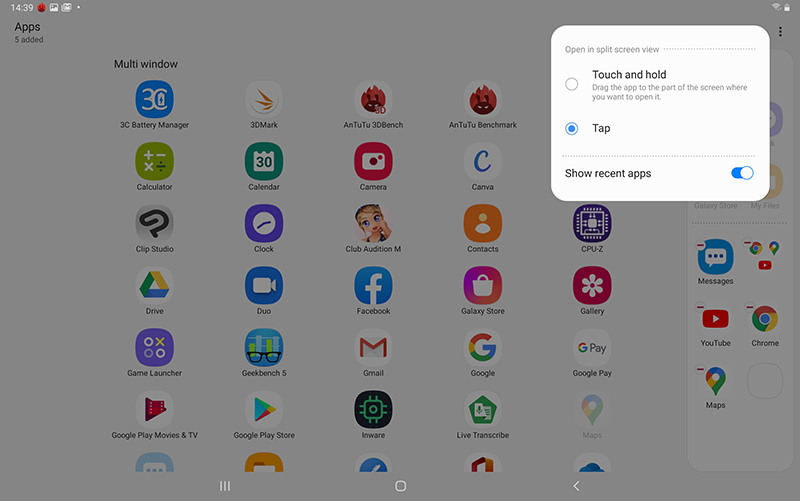 Finally, there is an option for you to ditch dragging altogether. You can opt to use tap to summon split-screen by changing the configuration via the pencil-like icon. This makes every subsequent tap on Edge Panel apps become a Multi-Active Window instantly. 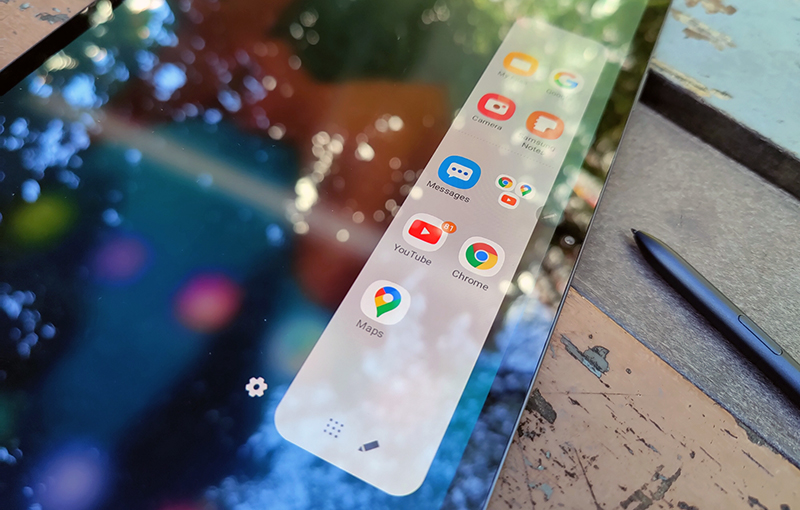 We highly recommend creating an App Pair, so there’s no need to go through that song and dance every time you want to bring up the same three apps. To do so, you’ll need to tap on the three-dot icon that sits along the borders of the windows and select the right-sided App Pair icon. That will prompt the tablet to save your current layout as an App Pair in the Edge Panel, allowing you to summon the combination in the future.

Finally, Multi-Active Window is only supported on select apps, which you can figure out by editing the Edge Panel (it shows ‘all apps’ and ‘multi-window apps’). Certain online shopping and productivity apps we’ve tried do not work, so it’s very much trial-and-error. 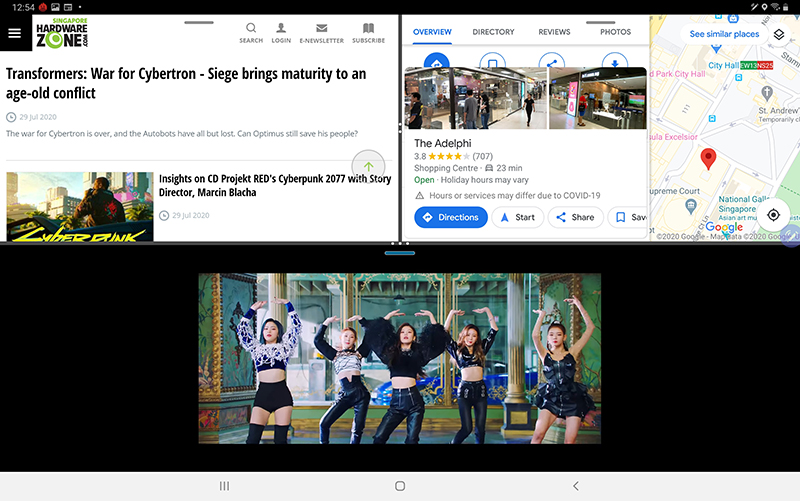 Apps that do support Multi-Active Window aren’t always optimised for the feature, as evident from the Google Maps window where the search bar is not easily accessible when compared to regular app mode. Multi-Active Window is also limited to a two-by-one configuration. You can’t have three apps vertically displayed at the same time - one of them will definitely take up half the screen, while the other two will share a quarter each.

Fortunately, I am not fond of using multiple apps simultaneously since the whole point of the tablet is to enjoy individual pieces of content in all its 12-inch glory. That said, my experience with Multi-Active Window is one I’d choose to keep to a minimum. It’s also a demerit to an otherwise helpful feature given its display, compatibility, and interface limitations. 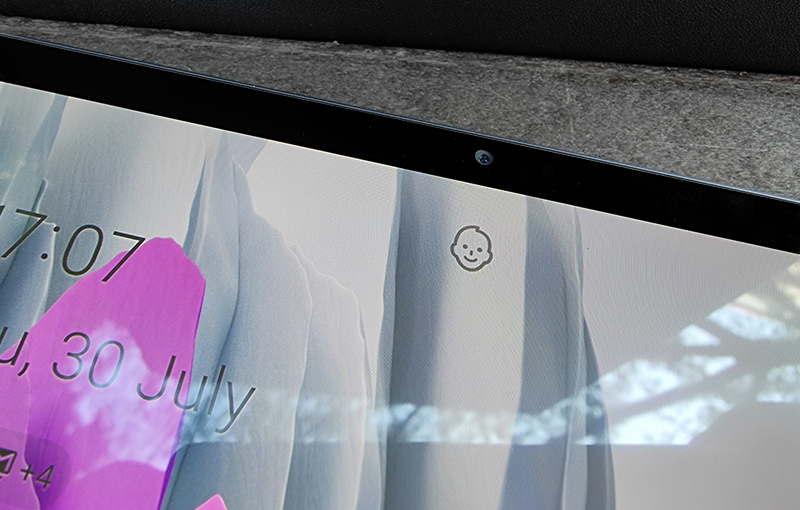 The Tab S7+’s screen unlocking options are mostly unchanged since the Tab S6. The under-display fingerprint sensor returns. It’s located towards the bottom half of the display, similar to where most in-display fingerprint sensors are usually found on smartphones. The Tab S7+ (or any tablet) is too wide for thumb-unlocking to be practical - I opted to use face recognition as the primary mode of unlocking, with the in-display fingerprint as a backup should face unlocking fail. Facial recognition unlocking is really fast, and it only flounders when I’m not viewing the tablet head-on. In such instances (e.g. checking emails and notifications from the desk), the fingerprint method comes in handy with its high accuracy and response time, no matter the orientation. 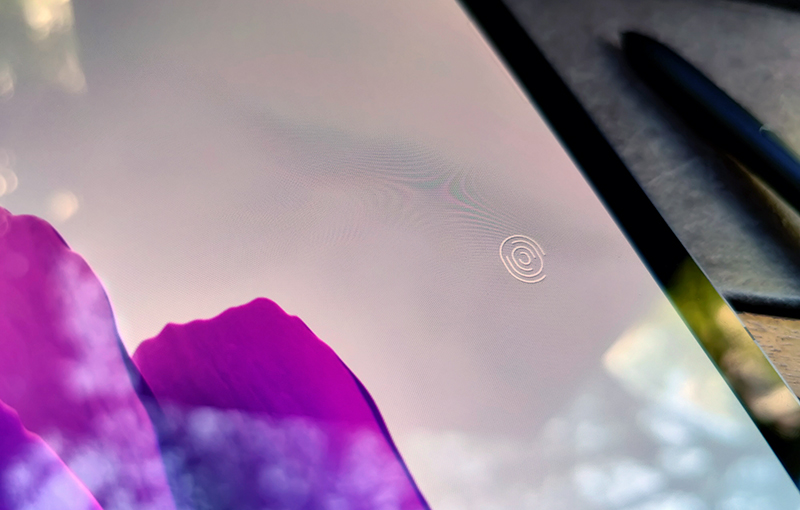 It’s worth noting that the regular Tab S7 uses a fingerprint sensor built into its power button. This makes the two models a different user experience altogether given the tablet’s dimensions and the button placement, so the configuration I chose for the Tab S7+ may not be as ideal on the regular Tab S7 variant.

On the audio front, playback experience on the Tab S7+ is amazing, and Samsung knows that too. They’ve brought back their quad-speaker configuration with AKG tuning and Dolby Atmos support. 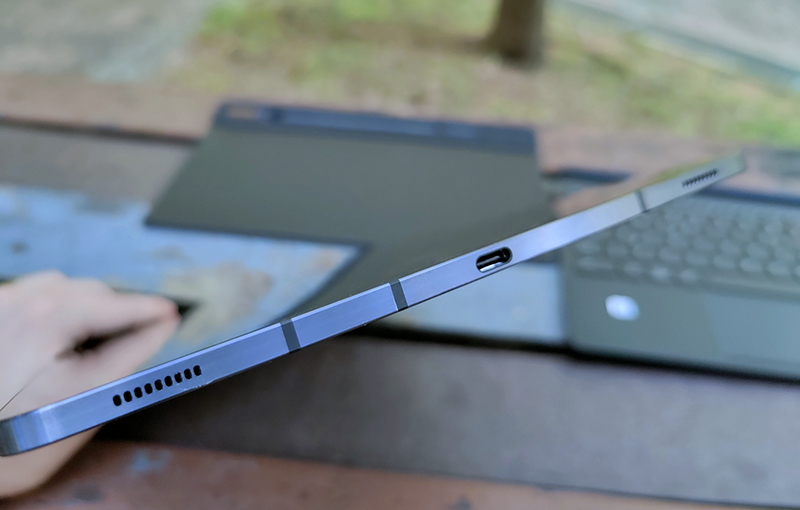 It’s clear, loud, and immersive when we tried it with YouTube, Netflix, and Spotify Premium content, which is basically what most people would ask for in a tablet. The sweet spot in the speaker’s soundstage comes to life when you hold the tablet squarely central to your gaze at approximately 30cm away. 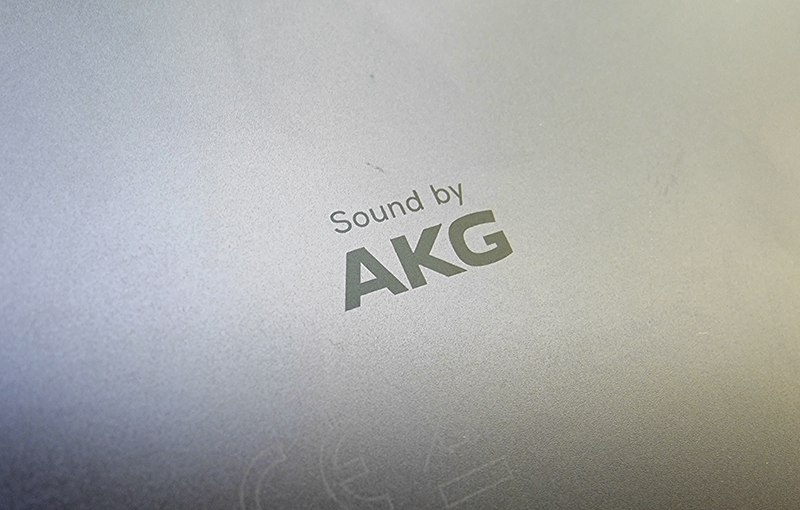 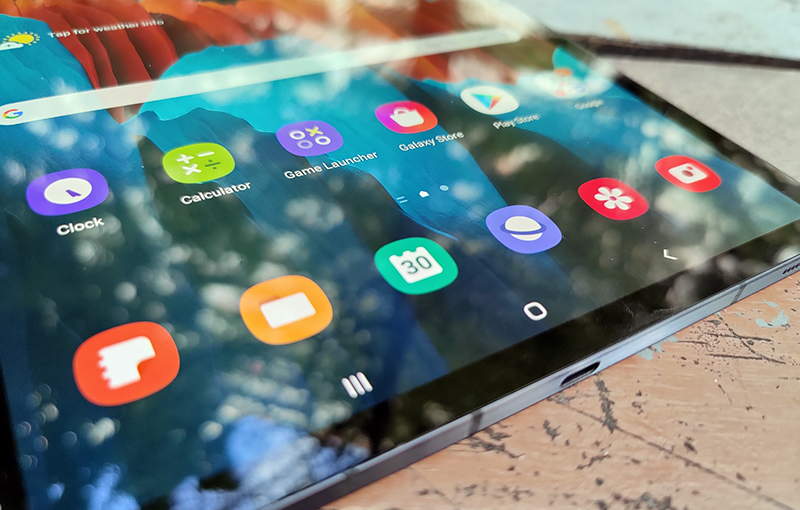 At this point, I was using 44GB of the 256GB available for all my core apps. It’s plenty, but the inclusion of a microSD card slot is still a nice touch. Fewer storage compromises mean higher productivity and reliability, and this is where iPads can’t match the Tab S7+. 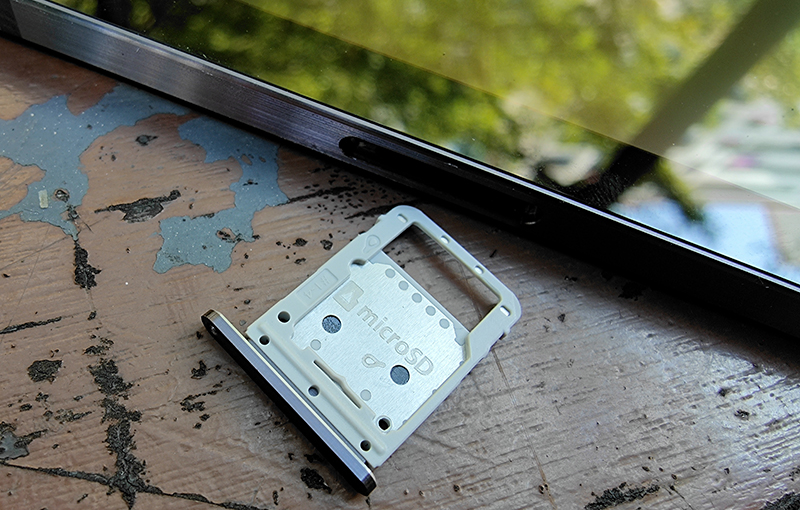 The other new software features on the Tab S7+ are important only if you are a heavily reliant on interoperability across your work and play devices. Samsung Notes now come with extended editing functions, such as importing and annotating directly on PDF documents, as well as an audio bookmarking feature to sync voice recordings and written notes. Samsung Dex now has wireless compatibility with Samsung smart TVs, and three new partnerships with productivity apps that will only go live after we publish this review.

The three partnerships are Noteshelf, a premium note-taking app which will be completely free to Tab S7+ users, six months of the premium version of Clip Studio Paint for artists and designers, on top of additional graphic creation templates and shapes for users of poster/presentation tool Canva (three major content updates for a year).