Looking back, the tablet's form and function has been experimental at best and it wasn't till Apple's debut of the iPad when consumers' preferred experience became more apparent. Even so, tablet screen sizes continued to evolve where 10-inch form factors were promoted in one end of the spectrum and 7-inch class in the other.

However, beginning with the Samsung Galaxy Tab 7.7 in 2012, it has spurred quite a bit of interest in the 8-inch "middle ground” category - the existence of the iPad Mini (7.9 inches across) is testament to that along with several brands now actively promoting this new form factor. This year, Samsung has released a record number of new tablet models with the Galaxy Tab 3 8.0 being one of them. Unlike Samsung’s premium range (such as the Note series), this tablet is geared towards the mid-range segment. More specifically, Samsung has targeted the Tab 3 series in general for the educational market. Just weeks ago, Samsung even launched the Galaxy Tab 3 Kids edition tablet for pre-schoolers (more photos of it here and here).

But back to the Galaxy Tab 3 8.0 (LTE) that we have here today, we intend to find out how it fares with other similar products of its class:- 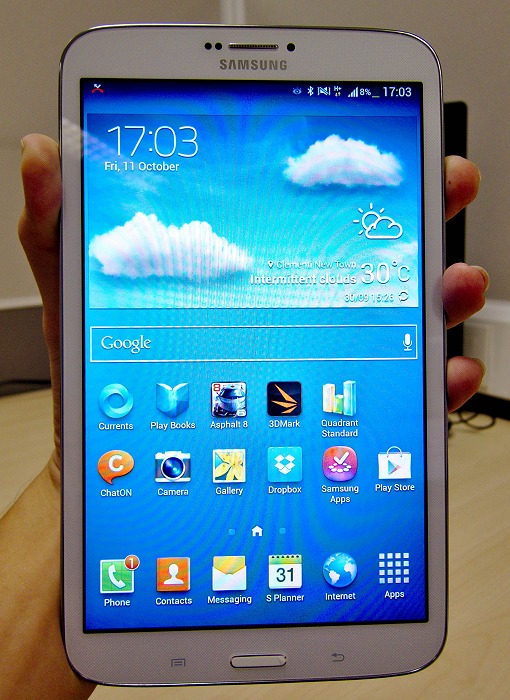 Starting from 2013, Samsung has adopted a uniform design across all its devices. The design language is mostly based on the Galaxy S III: a home button flanked by a menu and back keys, white plastic chassis and a chrome lining along its edges. The Galaxy Tab 3 8.0 is no exception and pretty much appears just as we’ve described it. For better or worse, this design uniformity makes the tablet feel like a phone, and in fact looks like an oversized phone. In fact, it even works as a phone! We’ll cover more about that aspect later.

The build feels a tad bulky, but still relatively fine compared to many other options in this mid-range tablet segment. The back, despite being a plastic shell, still feels good to hold, though one will reminisce the days of the Galaxy Tab 7.7 where the back was of brushed metallic finish and conveyed the tablet’s upper-tier positioning.

While on the topic of the rear of the device, take note that it’s not a removable cover and consequently, the Tab 3 8.0’s battery is not removable either. As such, all connectors and card slots are located on the edges of the tablet. You’ll find a micro-SIM and a microSD slot on the left edge of the tablet. The microSD card slot can read cards of up 64GB in capacity.

The stereo speakers are both situated at the bottom of the tablet, which is somewhat reasonable if portrait viewing is your default usage. However, this arrangement is not conducive to watching movies on a tablet, which are more often than not, viewed in landscape mode. For an optimal experience, we would expect the speakers to be placed, one at the top, and the other at the bottom of the tablet.

One major welcomed change from its past year’s iteration is the presence of a standard micro-USB port. Previously, Samsung tablets incorporate their own proprietary ports, making it impossible to share or utilize the ubiquitous micro-USB cables without an adapter or converter. Since the micro-USB port 2.0 port on the Galaxy Tab 3 8.0 supports both data transfer and charging, cable management is much simplified and is much more readily available (and not to mention, cheaper as well).

The display is an 8-inch TFT LCD, with a resolution of 1280 x 800 pixels. The colours are relatively rich, though nowhere as good as the older Tab 7.7’s Super AMOLED display. The resolution however is low, given today’s standards. Individual pixels are actually visible to the naked eye. As such, the Tab 3 8.0 is not suitable for artistic work or those who’ve high expectations of their device’s screen.

However, to address the concerns of the display appearing too pixelated, the Tab 3 8.0 comes with a "Reading Mode", in which it will adjust the white balance of the display, and render the text to have stronger anti-aliasing, i.e. softer edges. While it is a far cry from "Retina" or full HD resolution tablets, at least this mode makes reading e-books acceptable without much eye strain. As we’ve described, it doesn’t eliminate the presence of pixel visibility, but it tries its best to appear more pleasant for reading extended periods.

Unfortunately, reading mode only works with some apps, such as Samsung’s own Reading Hub, as well as Google Play Books and Amazon Kindle. To get an idea of the effectiveness of the Reading mode, check these photos from our Galaxy Note 8.0 review before and after enabling the mode.

Tablet as a Phone

Similar to its S-Pen enabled cousin Note 8, as well as the old Tab 7.7, the 4G/LTE version of this device (such as the one we reviewed) can make phone calls, without needing an earpiece. Whether would you actually hold the tablet to your face to answer phone calls is up to user preference and scenarios present. Nevertheless, it does come in handy as a backup “phone” especially when one subscribes to multi-sim plans and his or her phone runs out of battery.

A standard in all Samsung devices, the Tab 3 8.0 is powered by TouchWiz, Samsung’s UI overlay for the Android 4.2.2 OS underneath. It has its own implementation of lockscreen widgets, notification toggles and daydream mode.

One notable feature included in the Tab 3 8.0 is that it supports Multi-Window. First introduced in the Galaxy Note 2, this feature allows running of two apps, laid out side by side. With this, one can GTalk while actively updating status messages or commenting on Facebook simultaneously. You can also compose emails while referencing from Chrome, without having to continually toggle between apps.

Note that Samsung whitelists only certain apps that can be support Multi-Window. However, popular third party-apps, such as Whatsapp, are supported.

The Galaxy Tab 3 8.0 even has an IR transmitter. Using the built-in Smart Remote app, one can then turn this tablet into a remote control for TVs and other AV devices. And this works with any major TV brands, not just Samsung branded models. The app also has an accompanying channel guide, showing users the various programmes available for a particular timeslot.

The Tab 3 8.0 is powered by a Exynos dual-core 1.5 GHz processor, with 1.5GB RAM. While not a powerful processing platform, it still handles day to day needs adequately and we noticed it can cope with basic animations, transitions and video playback quite well. But let’s see how it stacks up against other tablets in the competitive playing field using more controlled benchmarks as a point of comparison.

Quadrant is one of the first few Android apps to measure the device’s calculation capabilities and speed considering its CPU, memory, I/O and 3D graphics performance. Given its hardware attributes and mid-range market segment, not surprisingly, it performed rather average.

To measure the device’s capability of processing 3D graphics and a mark of tackling complex mobile games, the cross-platform compliant 3DMark 2013 was used. As expected, Galaxy Tab 3 8.0 performed average. It is worthwhile to note that despite its cousin, the Galaxy Note 8, being a quad-core part, the 3D performance of the latter is roughly the same as the former. 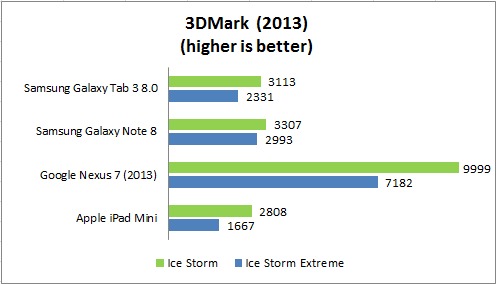 Sunspider Javascript measures the device’s performance in web browsing and rendering webpages, by measuring time taken to run a series of Javascript scripts. Not surprisingly, it performed average again.

The tablet sports a 5-megapixel rear facing camera and a 1.3-megapixel front facing camera. As it is with many other tablets that we’ve tested previously, you can expect basic quality from snapping photos on these devices, such as the Tab 3 8.0. For those interested in video recording, take note that the tablet can only record 720p videos; no full HD folks. Below are sample photos taken with the Galaxy Tab 3 8.0:- 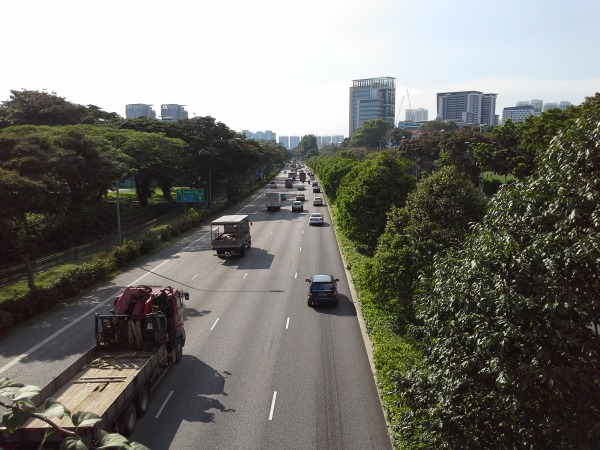 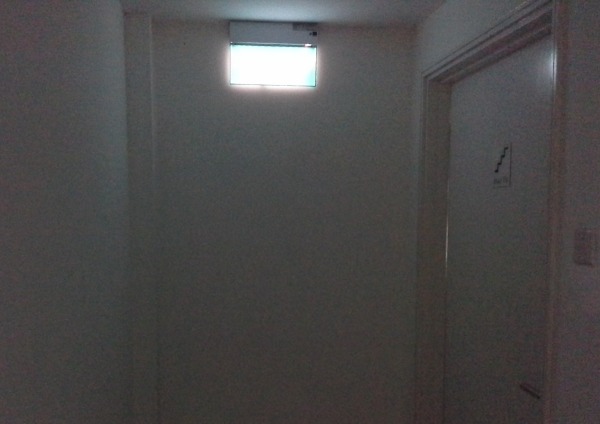 The Galaxy Tab 3 8.0 lasted rather well, making it past 7 hours and 49 minutes before shutting down. For some reason, despite the unit’s relatively low resolution (1280 x 800 pixels) compared to Google Nexus 7 (2013) and dual-core processor, its overall power consumption wasn’t the lowest. Despite that, the overall battery charge it can sustain is more than the competition and this easily allowed it outlast the comparison.

We measure the portability of a device by calculating its battery life to (weight x volume) ratio. Based on the Portability Index, you can see that the Galaxy Tab 3 8.0 comes out ahead. Its long battery life is its strongest ally as most of the other aspects match up similar to its competition.

Considering that the Galaxy Tab 3 8.0 is targeted at the mid-range tablet segment, it’s not too bad a device on its own. Once you start performing close comparisons, the proposition of the Galaxy Tab 3 8.0 diminishes somewhat. The Wi-Fi only edition officially goes for S$468 and the LTE model at S$668. For only less than S$100 more, you can get the better featured and better equipped Galaxy Note 8.0 (though it’s not a big improvement either). 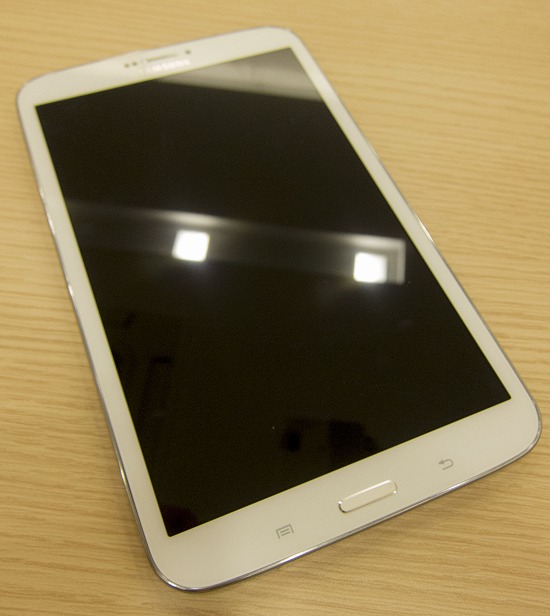 Its toughest competition however comes from Apple’s older iPad Mini (16GB) that retails for S$408 (Wi-Fi) and S$588 (cellular) respectively. While its specs aren’t superior, what Apple always delivers is user experience (tablet optimized apps) and the better quality and breadth of apps available in its ecosystem. The newer iPad Mini with Retina Display is an equally formidable option for not much more. Prices for the 16GB edition are S$548 (Wi-Fi) and S$728 (cellular) respectively, but as we’ve tested, it offers the best experience a compact tablet can offer today.

Then there’s also the smaller ASUS Nexus 7 (2013) edition where the 16GB Wi-Fi model starts from just S$379 and offers notably of better performance, features and value. Even the 32GB Wi-Fi model is only S$429, while the LTE equipped goes for S$529 - markedly more affordable than the Samsung Galaxy Tab 3 8.0 models.

Given the close competition and better value proposition of other models, we can only suggest the Samsung Galaxy Tab 3 series for those seeking the longest lasting 8-inch tablet. The Galaxy Tab 3 8.0 (LTE) is also as an option for consumers wanting an all-in-one device that doubles up as sizeable tablet and phone since it allows one to make calls without a Bluetooth headset. The long battery life of the device further bolsters its ability to function adequately long for both purposes. Sure it may appear odd to use it make calls, but that hasn't stopped others from doing so judging from observations on the street.

Apart from these aspects, for the best display, experience, overall features and value, there are other options to consider as listed earlier.