Samsung Galaxy S20 FE review: Is it only for Samsung fans?

Note: This review was originally published on 10 October 2020. 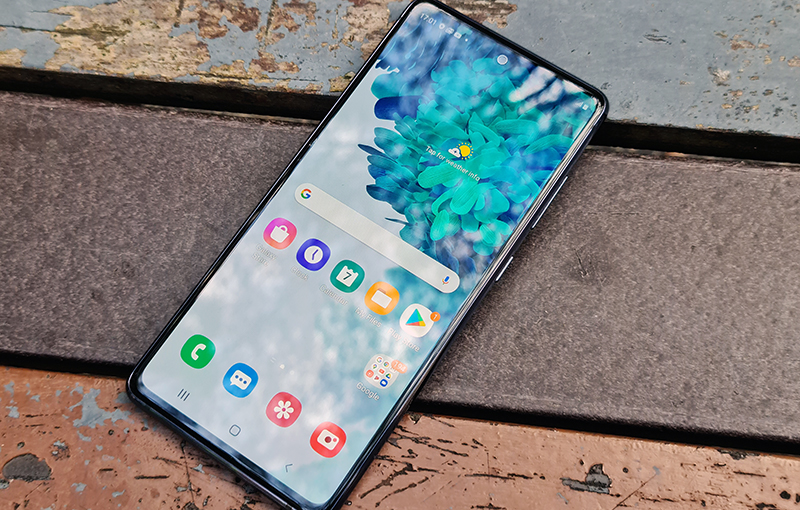 Fan Edition: for fans only?

Samsung brought forth many things from the Galaxy S20 series and plonked it into the FE variant. We say many, because a crucial aspect wasn’t brought over - in Singapore the Galaxy S20 FE comes with a Qualcomm Snapdragon 865 chipset, when we’d typically get Samsung phones with Exynos processors instead.

The phone itself sits somewhere between a regular S20 and S20+ with a 6.5-inch screen size, and the AMOLED display doesn’t come with HDR support nor 1440p resolution. S20 FE may share the same triple rear camera configuration, but the telephoto lens isn’t quite at 64MP - no, it’s actually 8MP. 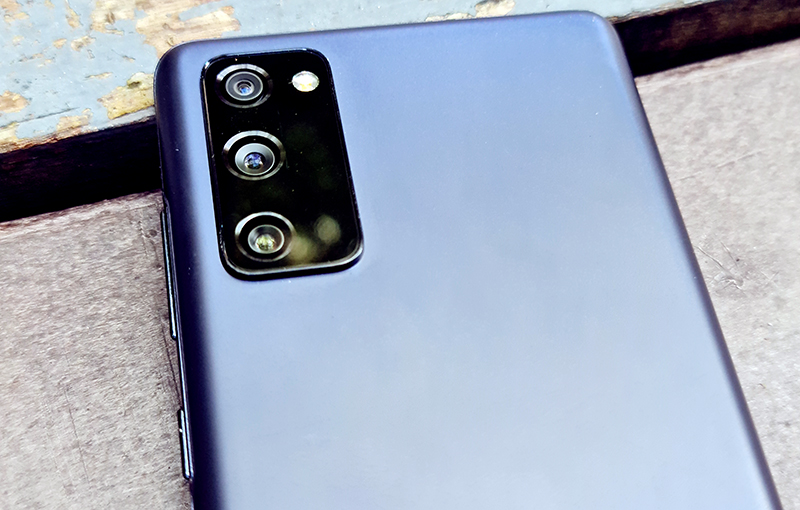 It does, however, retain its IP68 water resistance rating, comes with a slot for expandable storage, and has a battery capacity (4,500mAh) bigger than the normal S20’s, replete with fast-charging technologies for both wired and wireless replenishment. It also has 5G connectivity support, so the S20 FE is also 5G-ready.

The most unique selling point, however, is its price. At just S$1,068 and S$1,168 for the respective 128GB and 256GB models, this is Samsung’s most affordable flagship smartphone in a while. In fact, it reaches towards the budget flagship smartphone space, where the OnePlus 8 Pro resides.

In this review, we find out if Samsung really packed all the essentials into one device at an affordable price, or if the Galaxy S20 FE is a phone only its most hardcore fans would get. Let’s check it out. 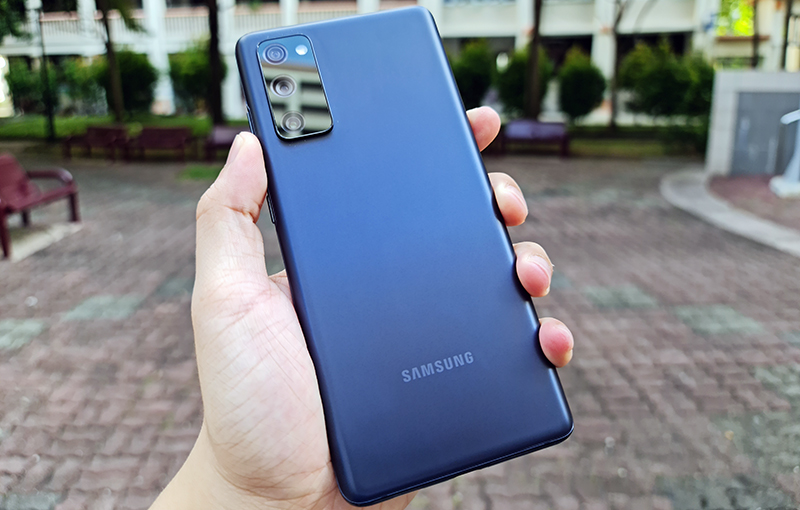 Some of the biggest modifications to the S20 devices are reflected in the appearance of the Galaxy S20 FE. In a bid to make the smartphone slightly more affordable than the regular versions, some stuff has to give.

The most noticeable difference is the use of a plastic rear on the S20 FE. While Samsung kept the Galaxy S20 design language on their Fan Edition device, the phone no longer uses the glass-and-aluminium mix found on its forebears. To keep up with the premium appearance, Samsung adopted what they call Haze finish on the S20 FE’s material, which gives the plastic device some sort of frosted glass look. This is great on two counts - one, it looks as if it’s glass, but it’s not as fragile. Two, frosted appearances are great at cutting back on fingerprint smudges, making the S20 FE lower maintenance in looks than its peers. Sure, it’s still not as sophisticated as a regular Galaxy S20 or Note20 device, but S20 FE does a good job in living up to the flagship reputation despite the materials used. 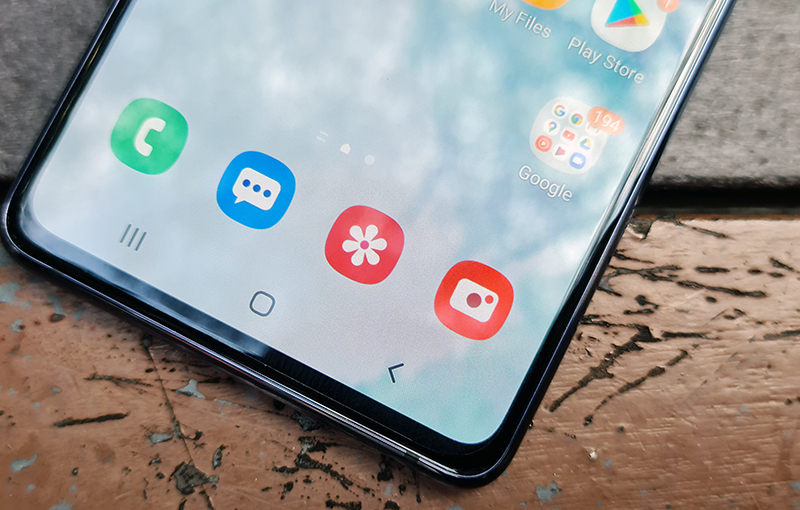 Next, would be the bezels. Yes, it’s odd that a flagship device still has bezels, but that’s the trade-off Samsung made when they opted for a flat display instead of the typical curved glass on the sides. As a result, the S20 FE has visible bezels on the sides. It frames the display neatly, but it’s still an obvious downgrade from the premium look-and-feel offered via its other flagship models. 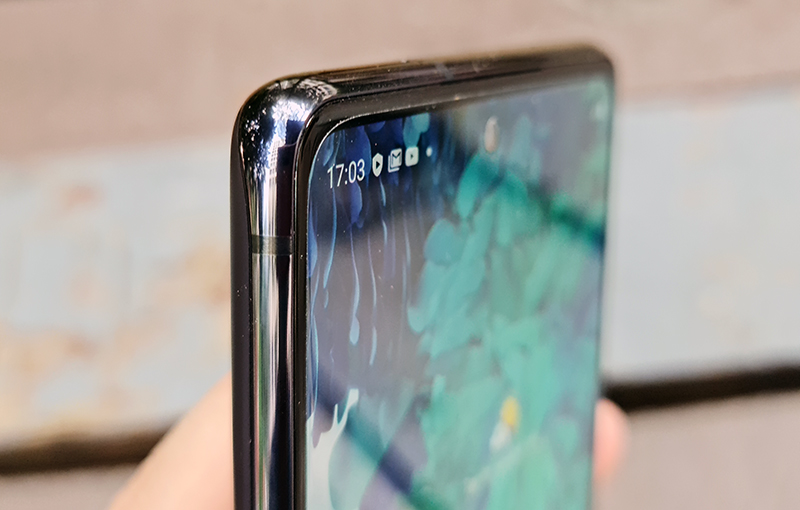 At 8.4mm, the S20 FE is also noticeably thicker than the regular S20 with 7.9mm thickness. While it doesn’t affect the phone’s handling, how slim a phone feels in hand also contribute to its overall premium positioning. With this, it’s clear that the S20 FE is here to perform, not to impress. 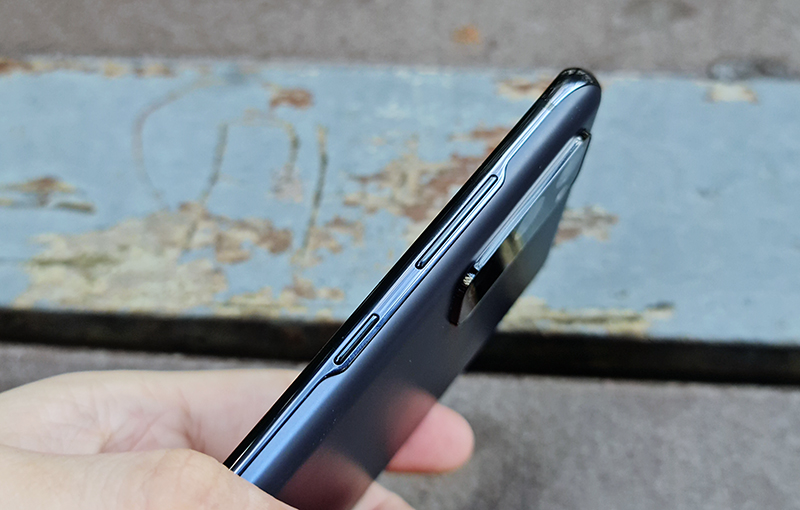 There are design differences where handling is affected, too. Where the S20 FE succeeds is in the slim rear camera housing. If you recall, most premium flagship and flagship devices this year have ridiculously thick housing for their rear lenses. Not the S20 FE - you could place the phone face-up on a desk and the tilt is hardly noticeable. 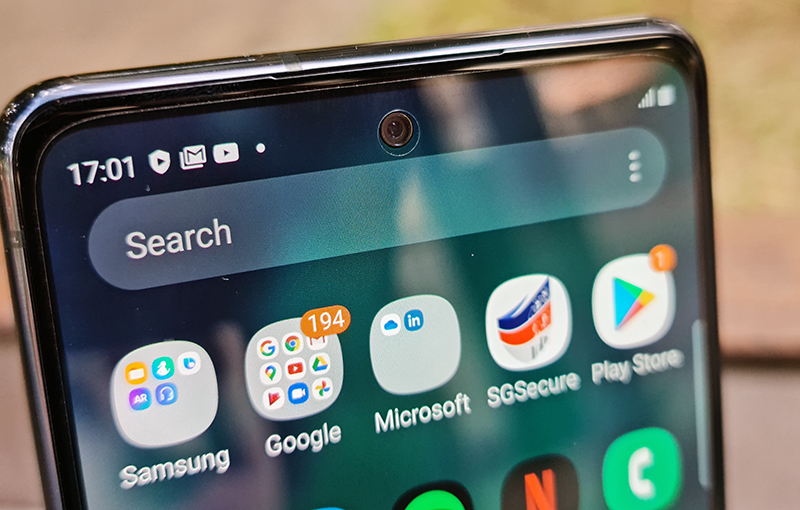 At the flagship tier, Samsung was wise to retain IP68 waterproofing on the S20 FE. The device cuts some corners for its design, but your features and handling experience won’t be compromised. 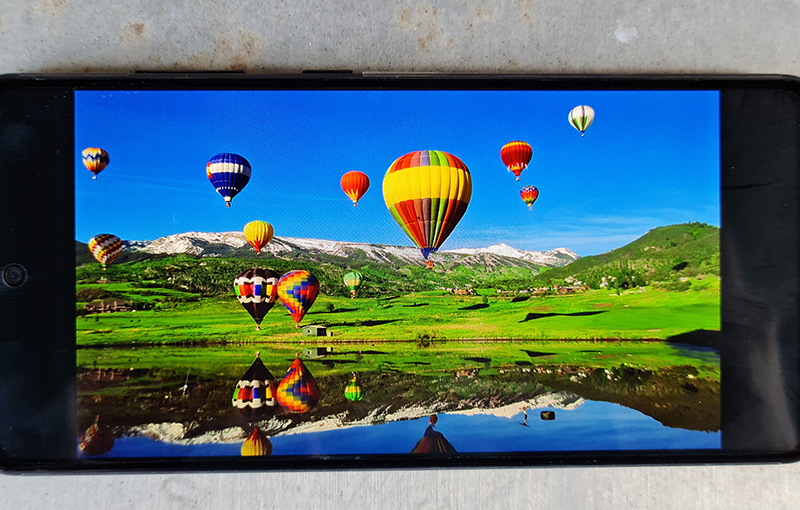 Besides the lower resolution, the S20 FE does not use Samsung’s Dynamic AMOLED 2X display. If you’ve been following our Samsung phone reviews, you’ll know that “Infinity-O” is a marketing term that denotes the O-shaped cut-out for the front camera on the panel, while Dynamic AMOLED refers to an HDR10+-certified AMOLED display. So, the Fan Edition display’s trade-offs are its resolution and support for HDR, even if the AMOLED panel quality is on par. 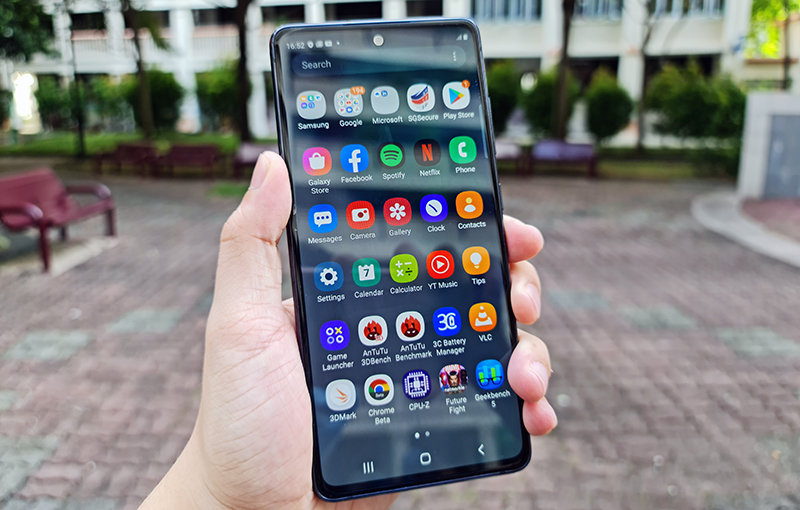 The lack of HDR on the S20 FE makes it slightly less vibrant and as colour-rich as the regular S20 models (which is also less vibrant than the Z Fold2 and Note20 Ultra we also have on hand). On the flip side, folks who do not like the over-saturated colours on typical Samsung phones might find the S20 FE colour space a little more pleasing on the eye. Despite this difference, the S20 FE’s panel is sharp and is highly capable of handling details.

What’s ‘fixed’, however, is how the S20 FE will run at 120Hz refresh rate whenever the phone’s adaptive display deems fit. In the older S20 phones, Samsung couldn’t get its phones to run at 120Hz when displaying content at 1440p. For the S20 FE, it’s not limited by this oversight, since it doesn’t have 1440p resolution. 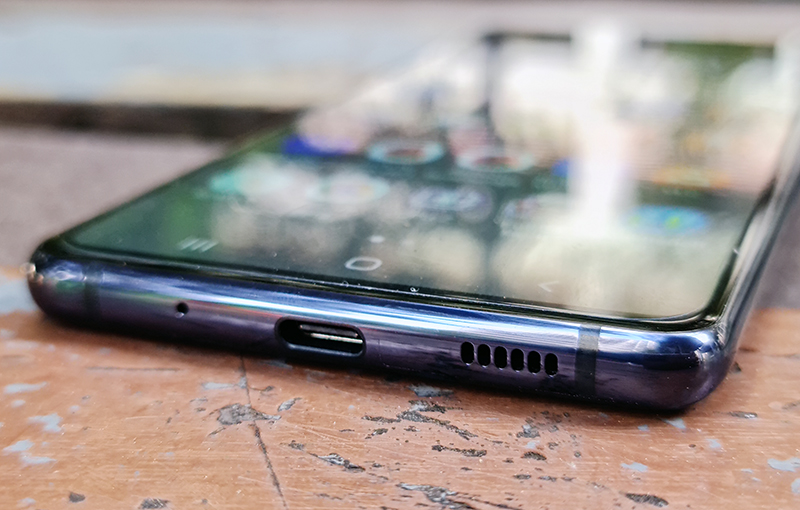 Audio-wise, the speaker quality and configuration remains unchanged. It’s a little annoying how the call speaker faces you and a second audio speaker at the bottom faces away when holding the phone in landscape mode. Still, it passes as stereo speakers. You’re not going to have any major issues with the soundstage or signature if the Galaxy S20 ones were acceptable. It adopts a mid-heavy profile with biases towards high-pitched percussion and vocals. 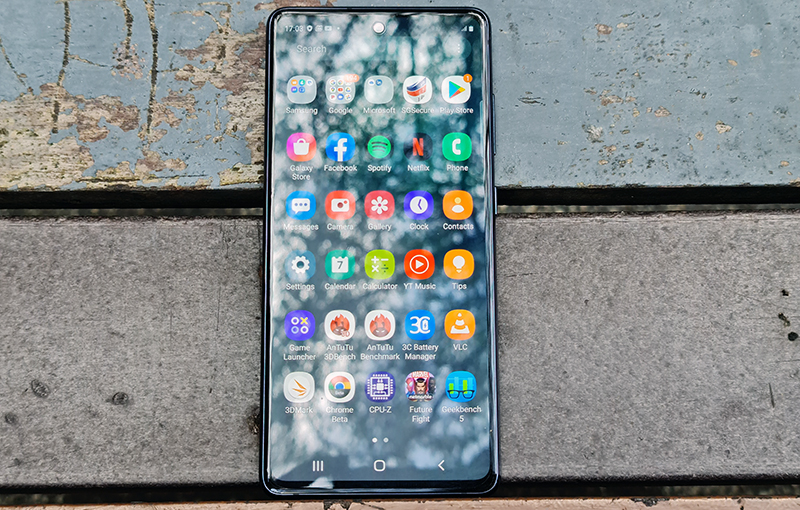 Granted that the S20 FE is supposed to be the ‘fan edition’ of the regular Galaxy S20 series, this would mean that the operating system and the software features are either identical to, or slightly better than before. If you flip through the USPs of the Galaxy S20 FE, you’ll know the enhancements lie in its chipset ‘change’, its wider selection of colourways, some returning photography features - all these are covered in other sections of the review.

Out of the box, the Galaxy S20 FE uses Android 10 reskinned with Samsung’s One UI 2. Reskinning is probably an understatement for Samsung devices - they go to great lengths to create software-based features, with some making a return to the S20 FE. For instance, Multi-Active Window and App Pair on the Galaxy Tab S7 tablets are on this phone. However, the S20 FE doesn’t have a display as wide as the Tab S7, so you’re looking at pairing only two apps for practical use.

Perhaps the most notable upgrade in user experience is the fluidity of using the device itself. Browsing and reading on the web felt so smooth to the extent where I had to check if I was still browsing online. The device runs like a dream, which flies in the face of the cheaper chassis.