A peek into the future of mobile gaming 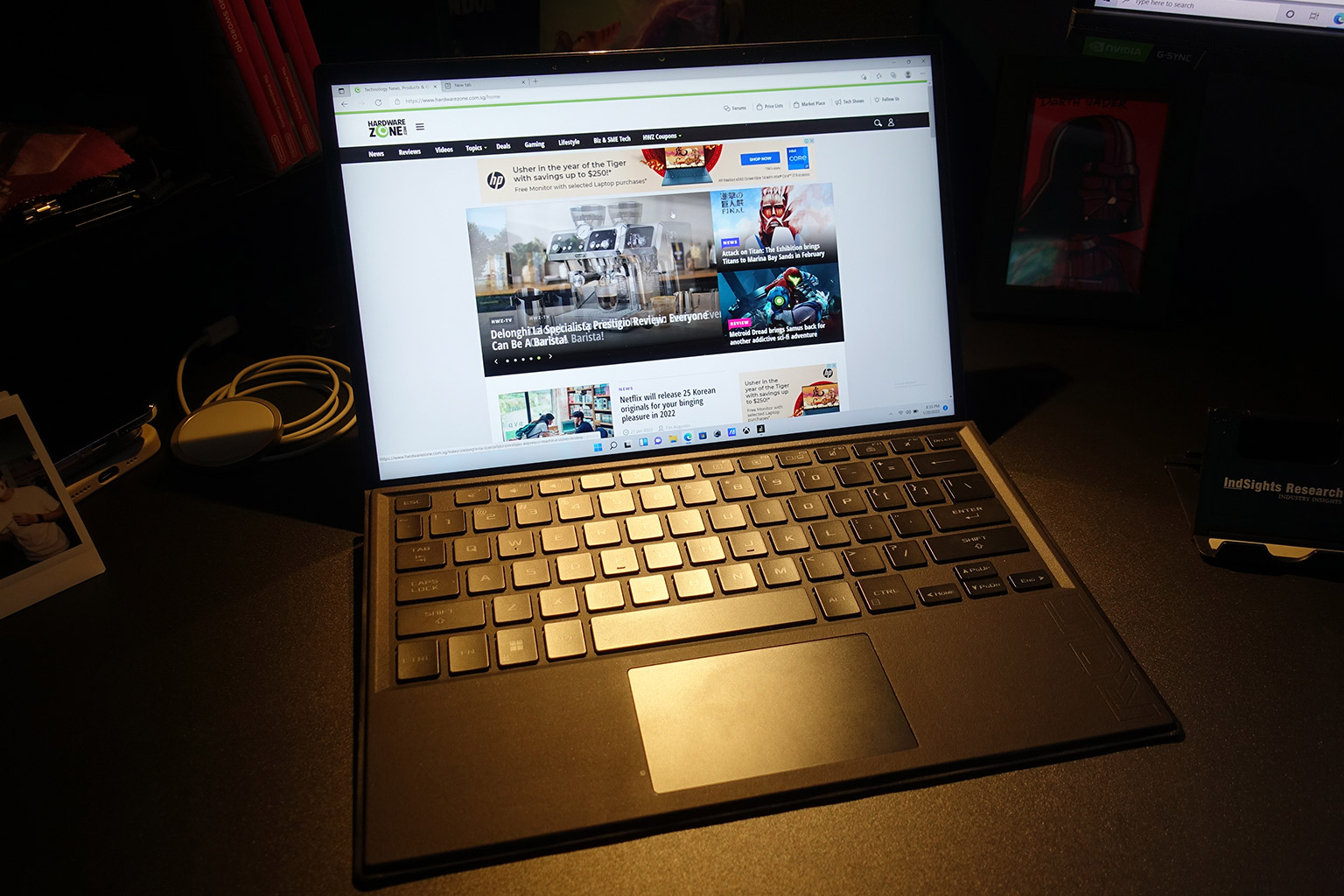 You got to give ASUS props for always upping the ante in their product design. It doesn’t always work – the confounding array of Zenbook models still confuses us at HardwareZone to no end. Zenbook 14? Zenbook 14X OLED? Zenbook 14 OLED? Yikes!

But their gaming sub-brand ROG, on the other hand, continues to surprise me and in a good way. This time, it’s the Flow Z13, which the company has touted as the “world’s most powerful gaming tablet”.

That’s right, a gaming tablet. I have spent plenty of time with it, first with an engineering sample that ROG sent over and then a proper retail unit (for Singapore) over the past month. So here's my take. 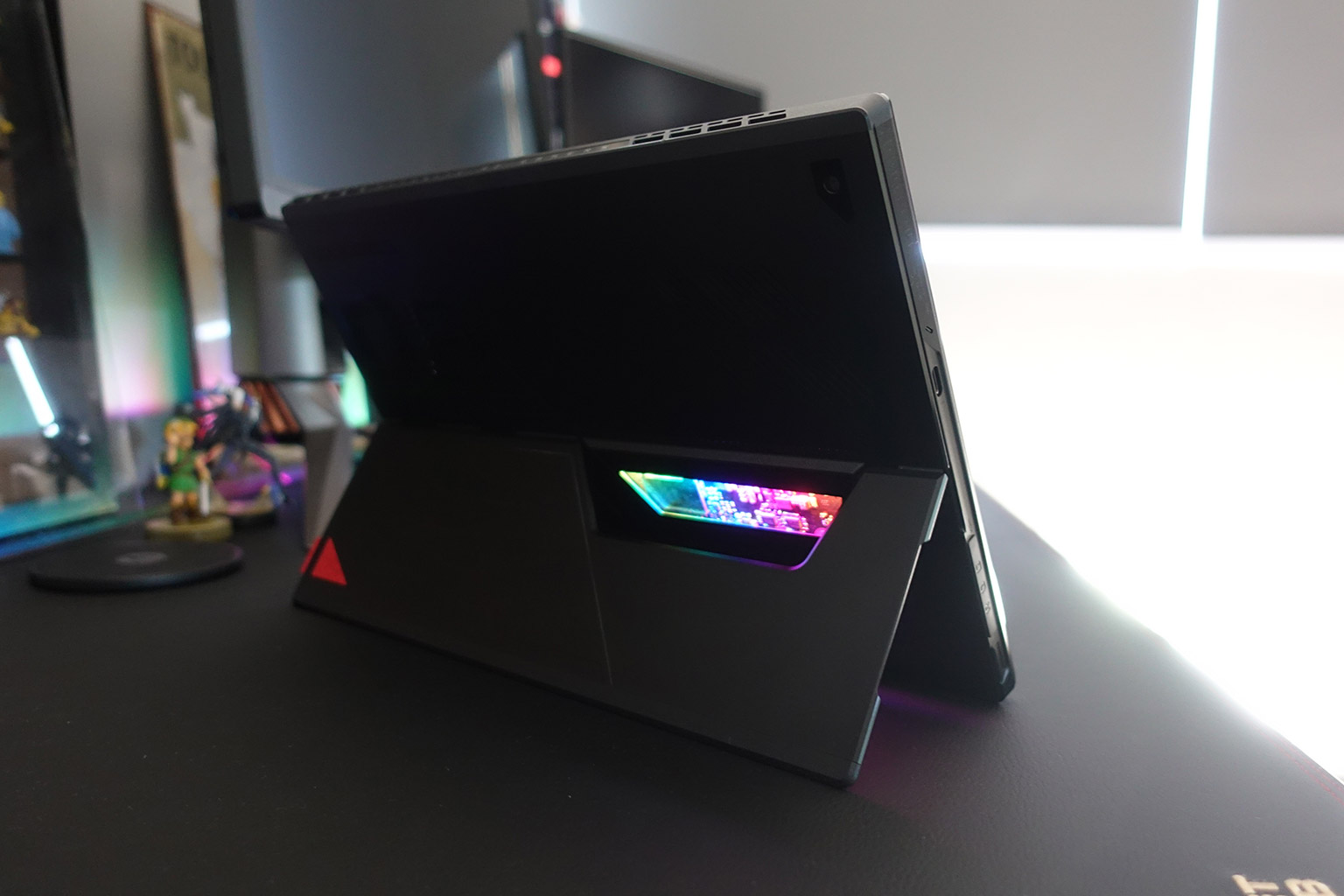 While the ROG Flow Z13 is essentially a 2-in-1 laptop-tablet hybrid that looks akin to a souped-up Microsoft Surface Pro (it’s got a kickstand and a detachable keyboard that comes on and off easily), in many ways, it’s built more like a notebook than a tablet. For one, it’s running on a full-fledged Windows 11 OS. My review unit also comes with an RTX 3050 discrete GPU inside (complete with MUX Switch and NVIDIA Optimus support) and has a capable 14-core Intel Core i7-12700H processor. Lastly, and here’s the best part: it can even be hooked up to the optional ROG XG Mobile external GPU (with an RTX 3080) – turning it into a mobile gaming powerhouse.

The downside? At S$2,998, it’s not exactly 'cheap' for an RTX 3050-based gaming device. But I will caveat that as with any hero ROG products, the Flow Z13 isn’t made for the gamer on the street. Like the ROG Mothership, the Flow Z13 feels like a niche, luxurious even, gaming product.

What may not be obvious from the pictures here is that unlike what you would expect from a tablet hybrid, the Flow Z13 is quite chunky (relatively speaking) at 1.2cm thick and almost 1.2kg. It’s certainly not meant to give you the same mobile experience as you would expect with a Surface Pro or an Apple iPad. But considering how ROG can cramp up both Intel and NVIDIA's processors inside a 13-inch slab of metal, and managing to keep it cool at the same time, is a modern engineering marvel.

In short, it’s a really great looking and well-made notebook (or a tablet, if you will) that’s powerful enough to not let you down for daily productivity and gaming.

The 13.4-inch display is worth mentioning for its FHD resolution (1,920 x 1,080 pixels) and 16:10 aspect ratio. The screen also supports touch inputs and stylus, Dolby Vision certified, and is Pantone Validated. Refresh rate is supported up to 120Hz. It’s a really gorgeous display. There's also a 4K display option, with a 60Hz refresh rate, which we saw with our earlier preview, although it does not look like ROG is bringing that model to Singapore.

Ports selections are pretty good on the Flow Z13 too, which you rarely see on similar products. This includes a USB-C that supports Thunderbolt 4 and DisplayPort, USB-A, 3.5mm combo audio jack, and a microSD slot at the back. Connecting the optional XG Mobile not only boosts the laptop’s graphic prowess but also adds additional ports including HDMI 2.1 and Ethernet. There are even volume keys on one side.

If I were to be nit-picky, I wished ROG had been a little more adventurous and added a micro-SIM slot as well, to give the Flow Z13 complete mobility.

The detachable keyboard comes in a soft base that makes it noticeably flexible and I found that to be a little bit disconcerting after prolong usage. That said, I found the keys on the Flow Z13 keyboard to be enjoyable to type on – thanks to the high key travel. It’s also got RGB, if that's important to you.

In terms of performance, how does the ROG Flow Z13 fare? Let's find out in our gaming, 3DMark and gruelling SYSmark 25 and MobileMark 25 tests. 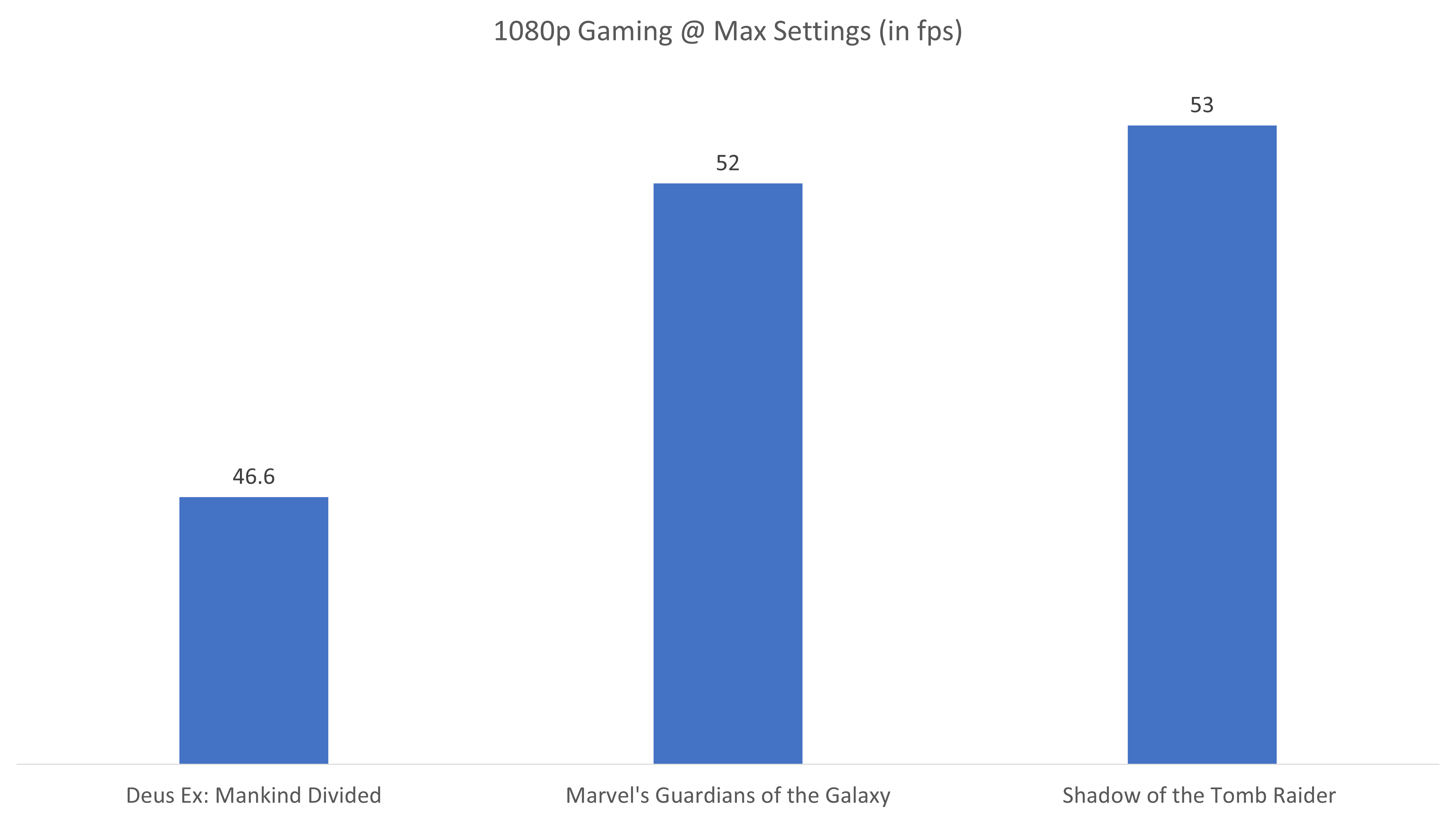 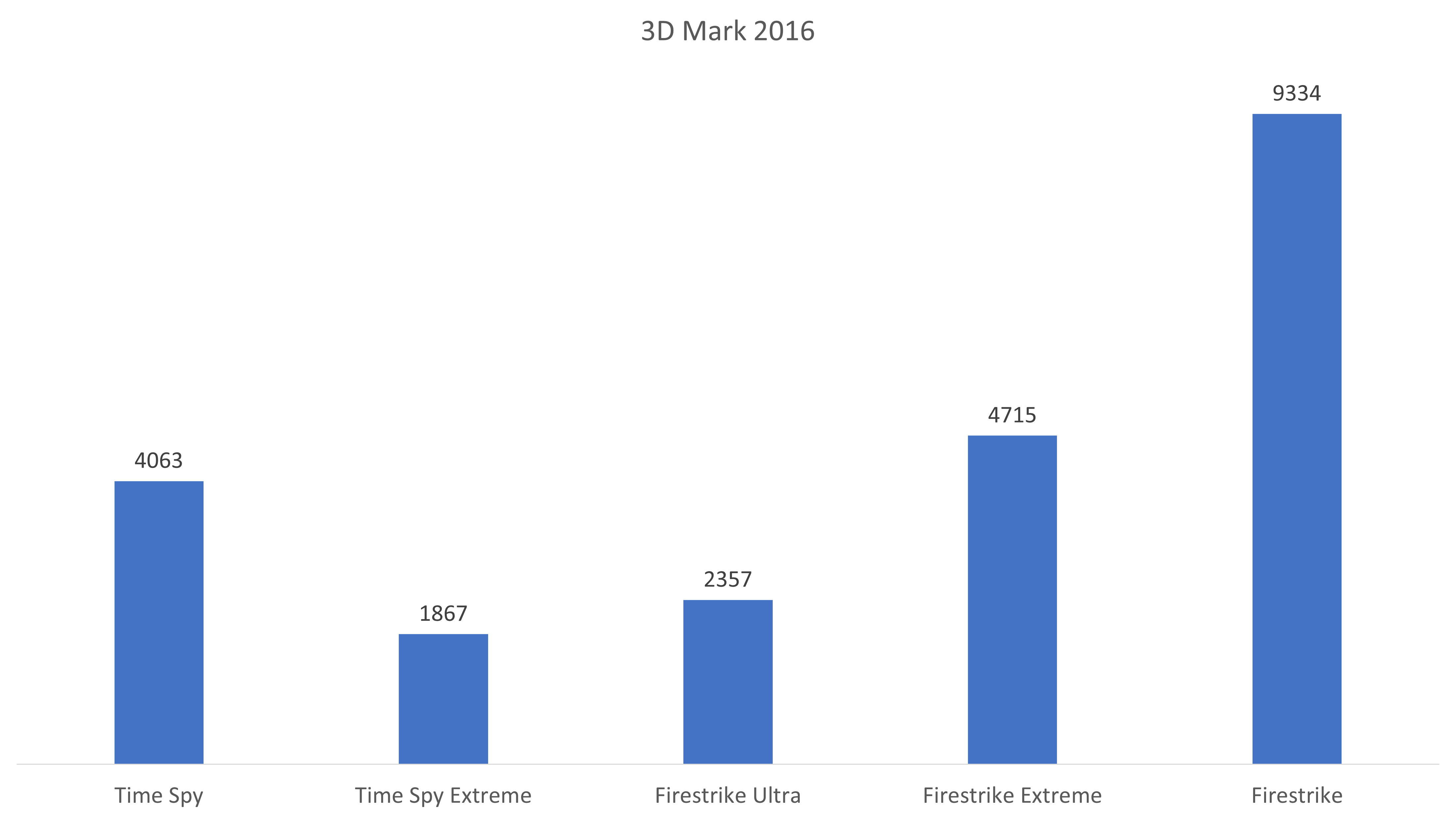 With a low-tier RTX 3050 Laptop GPU, the Flow Z13's mediocre gaming performance in titles like Deus Ex: Mankind Divided, Marvel's Guardians of the Galaxy and Shadow of the Tomb Raider is not unexpected. But it's worth noting that these tests were done with our usual maximum graphics settings, and playing them on lower settings will improve the gaming experience.

With SYSmark 25 and MobileMark 25 however, which tests the device's productivity and content creation performances in a wide range of real-world applications (in the case of MobileMark 25, the notebooks' performance while running on battery), the Flow Z13 showed some very strong numbers - thanks to its powerful Intel Core i7-12700H CPU. For comparison's sake, I put it head-to-head with the Dreamcore Fusion 15 (with an Intel 11th Gen Core i7-11800H processor). 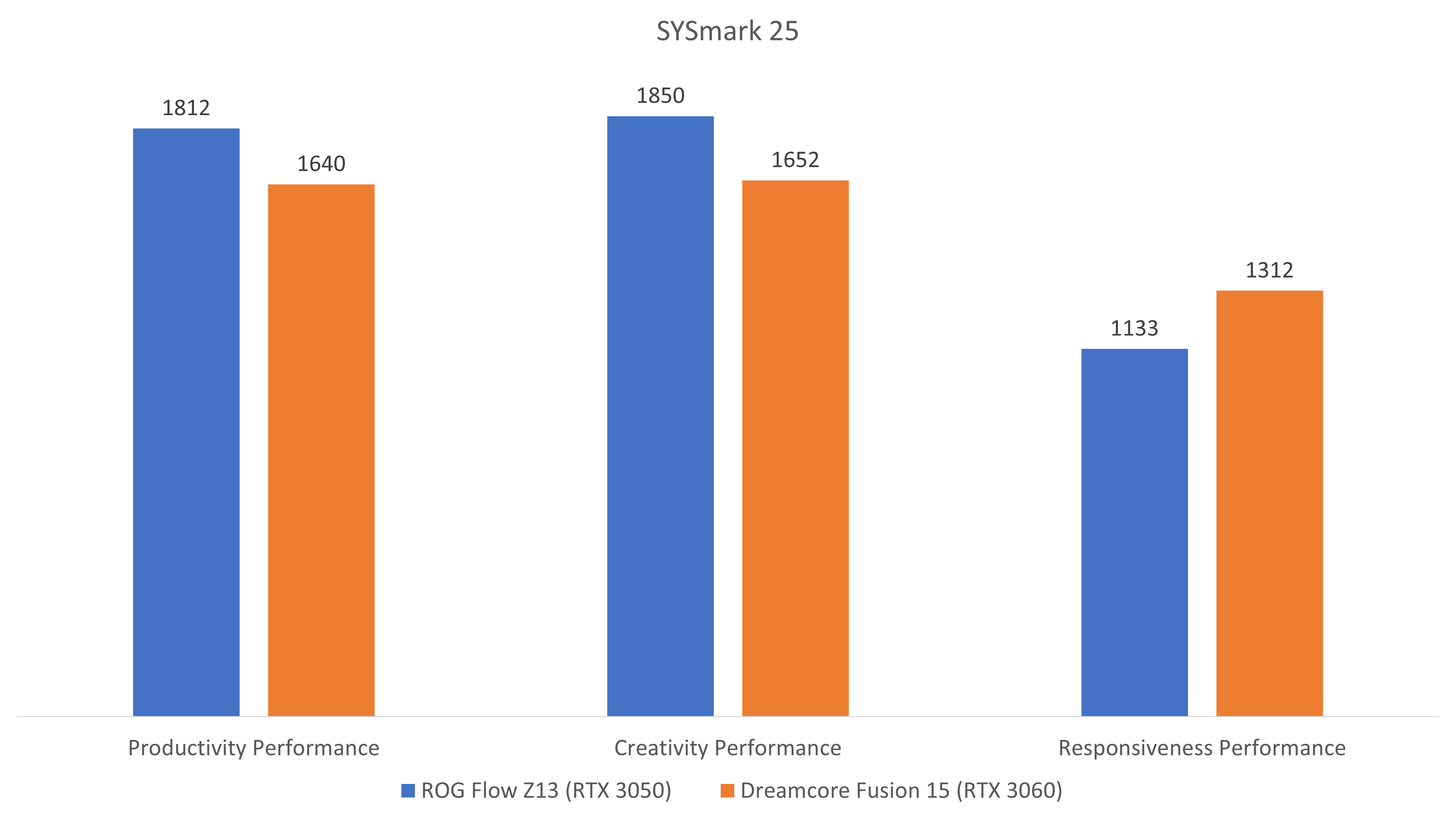 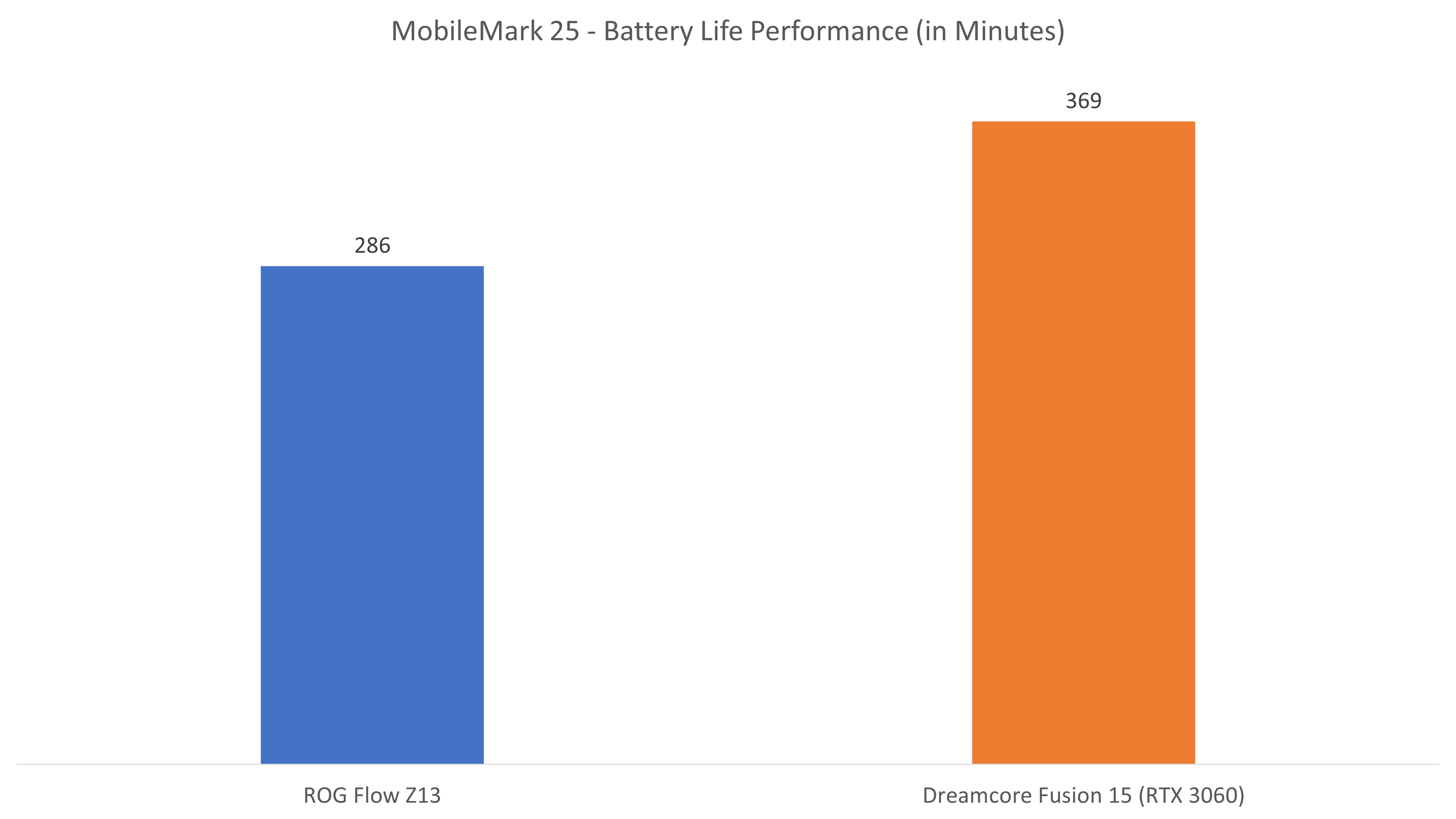 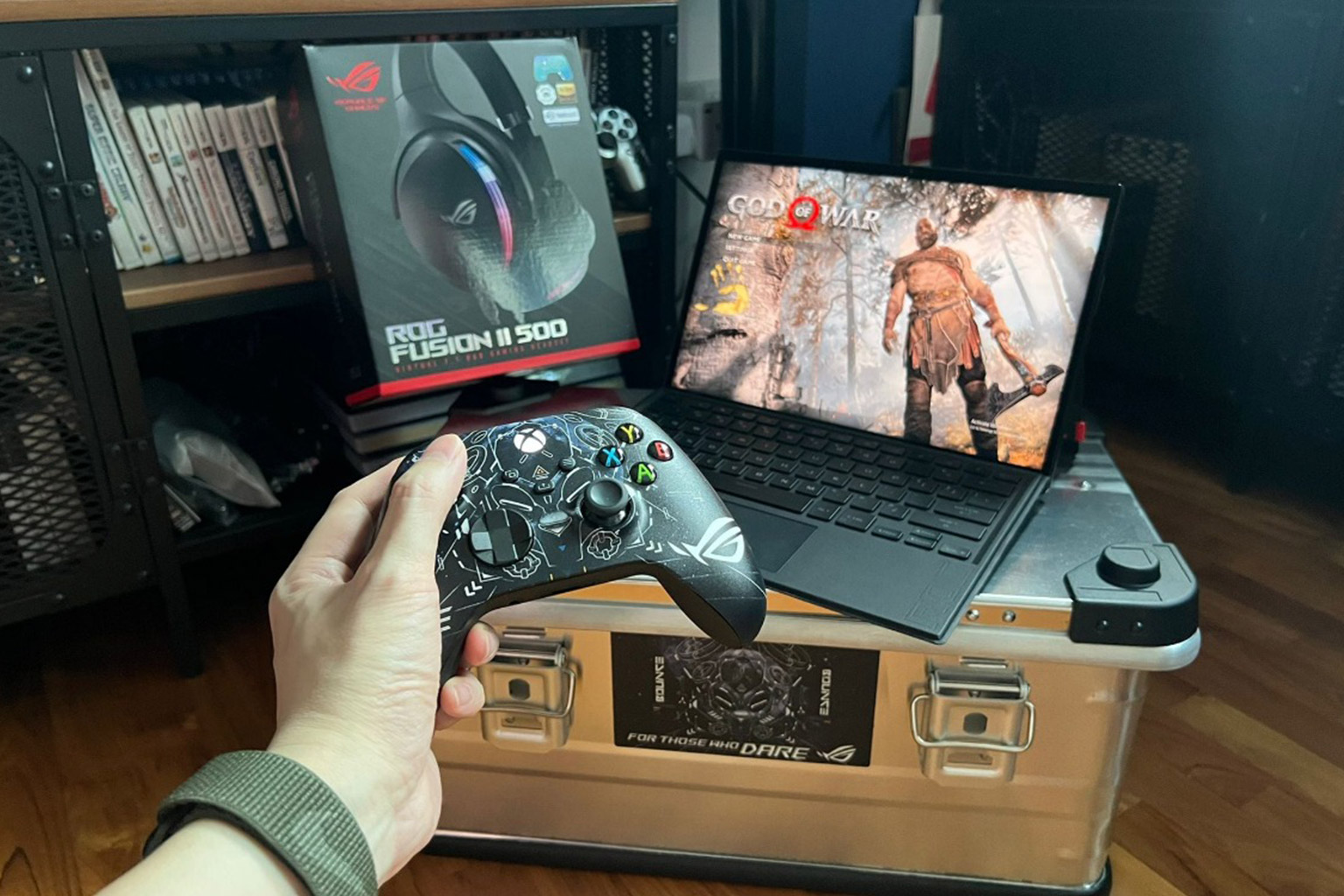 Mixing the lowest-tier discrete graphics processor from NVIDIA with a powerful Intel Core i7-12700H CPU seems like an odd decision, since the RTX 3050 may not offer a lot of gaming prowess. But it does allow for the Flow Z13 to retain its slim and mobile design since it does not require a large cooling system. It also meant that the notebook offers a lot more in terms of battery life than notebooks with more powerful GPUs.

I actually thought that's a great foresight by ROG from a design perspective.

Think about it: “Gamers” these days do not just play games on their devices. They want more possibilities, and the Flow Z13 offers that by virtue of its tablet form-factor.

Want to catch your favourite Netflix show on the couch? Fold the detachable keyboard to the back or remove it completely and place it on your lap. Do you love mixing EDM tracks? Connect a DJ controller to it and the Flow Z13’s touchscreen and kickstand allow you to turn it into a mixer. Oh, you really want to play high-end games too? Guess what, you can connect an ROG XG Mobile eGPU that’s powered by a GeForce RTX 3080 (the eGPU is sold separately) and turn it into a gaming powerhouse.

In fact, the Flow Z13 is a great device for cloud-gaming services (hello, StarHub's GeForceNow).

I truly considered the ROG Flow Z13 one of the gaming company’s best innovations yet. Granted, the ROG Flow Z13 is also arguably ahead of its time. But if anything, it offers a wondrous peek at what the future of “mobile” gaming could possibly look like. And I got to say I like what I am seeing.

That's also why the ROG Flow Z13 is one of our Tech Awards 2022 Editor's Choice Innovation Award winner.

Write a Review
Compare This | Specifications
Solid, versatile design
Fantastic display
Great productivity and content creation performances
A SIM-card addition would have turned this into a true mobile gaming device
Mediocre gaming performance
Flexy keyboard base
Our articles may contain affiliate links. If you buy through these links, we may earn a small commission.
Sponsored Links