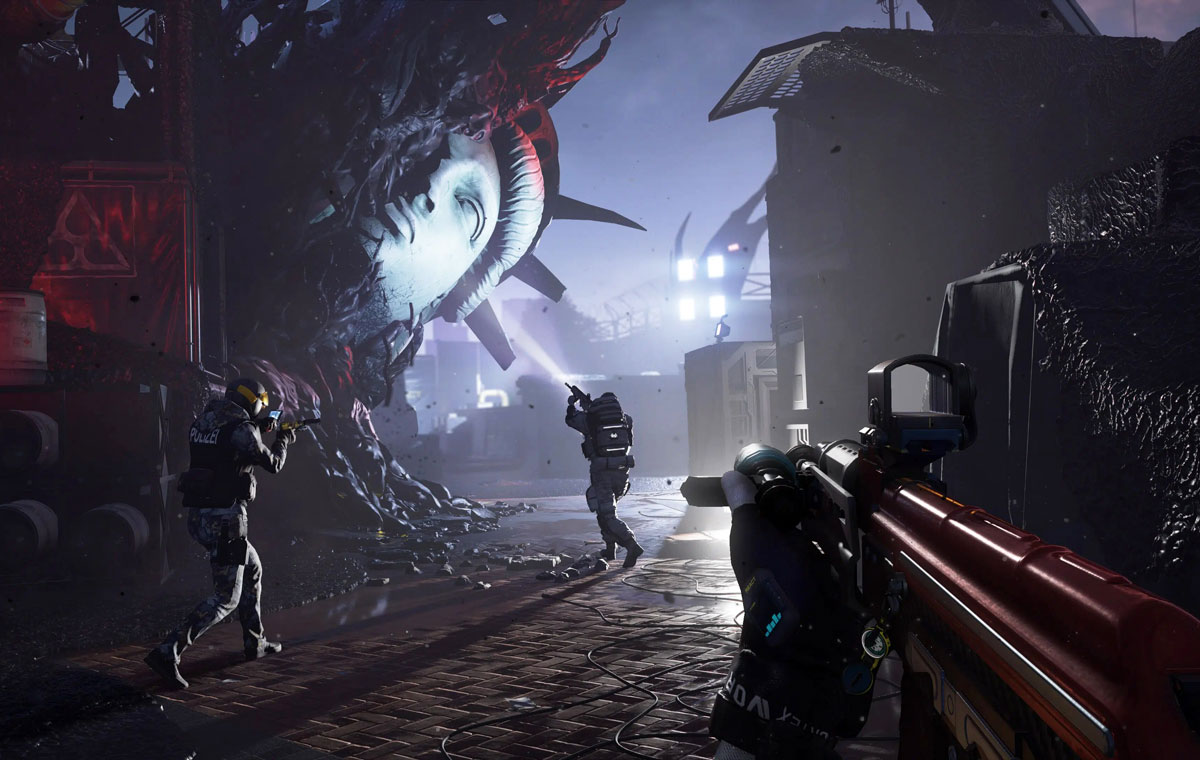 Remember when this game was called Rainbow Six Quarantine?

Ubisoft’s latest first-person shooter is built on the bones of Rainbow Six Siege’s Outbreak event, which threw its players into a sci-fi alien invasion. Siege is much better known for its PvP competitive gameplay, but Outbreak found success as a story-focused PvE mode too - so is it such a surprise that Ubisoft turned it into a full-blown videogame? Rainbow Six Extraction serves up a direct sequel to Outbreak, picking up where its story left off with the world suffering from an overwhelming alien invasion.

Extraction brings Operators from Siege back with most of their gear and abilities intact to deal with this new threat, only now they’ll have to work together against aliens instead of fighting each other. While we’re sure most Siege players will want to stick with the original game’s PvP gameplay, Extraction provides a compelling co-op experience that could keep you coming back for more. As long as you can forgive its uninspired presentation, that is. 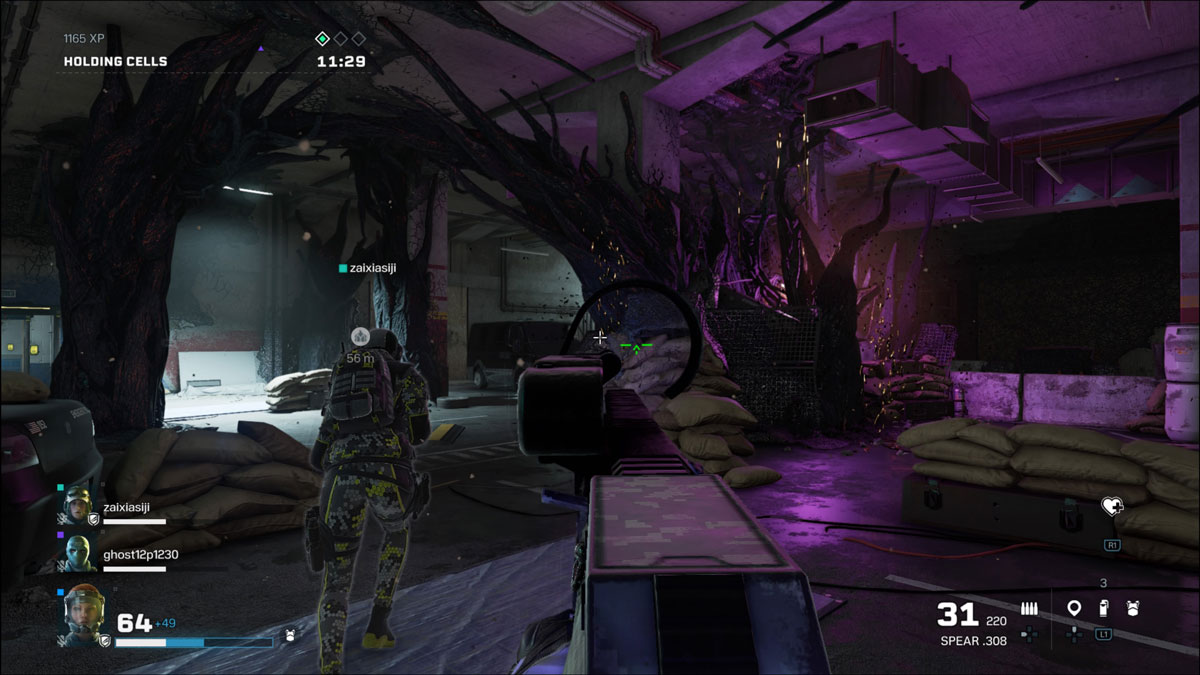 Rainbow Six Extraction’s story kicks off right after a hostile alien force known as the Archaeans invades Earth, infesting famous monuments and creating mysterious nests. To combat this threat, Operators from Siege form REACT, a group that infiltrates infested locations all around the world to extract information about these creepy aliens. While the game can be played solo, it’s best enjoyed in co-op multiplayer where Operators work together in teams of three.

Each incursion takes you to a map composed of three smaller locations. Each map has three objectives to complete in total, with each objective taking up one sub-map area. Once you complete a sub-map’s objective, you can choose to either extract early with all your XP, or keep going to the next area to complete more objectives for even more XP. The more objectives you complete, the more rewards you gain - but it’s a risky business going for 100% completion every time.

Extraction feels very purposefully oriented towards the survival genre, pushing a more methodical style of gameplay towards the player than Siege did. When Operators die in combat, you don’t simply fail an incursion - you lose access to that Operator. If you want to use them again, you'll have to complete special MIA missions and extract them from a map safely. During incursions, damaged Operators can never fully recover lost HP. Health pick-ups only temporarily boost your HP bar before the effect fades away. Hurt Operators are also unusable after incursions, and have to be left to heal in real-time. 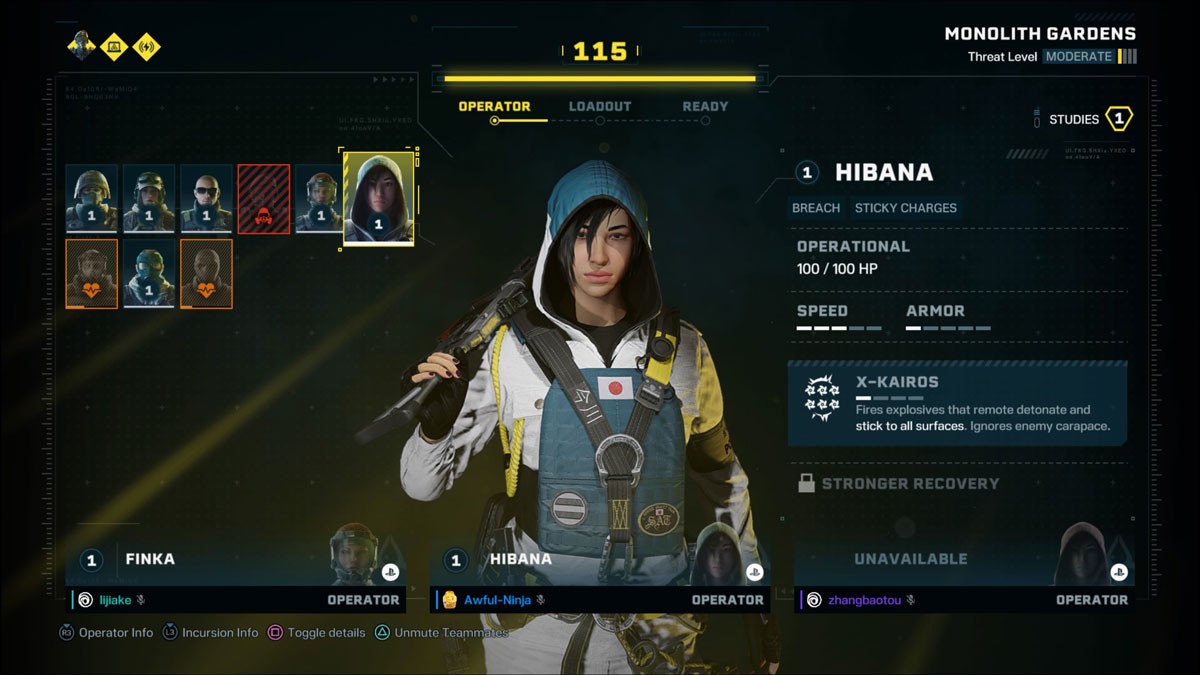 Operators also have unique abilities, so it's easy to get attached. For example, my go-to Operator Finka is a healer who can instantly revive teammates in tough spots. Special care has to be taken during missions to avoid getting mobbed by enemies, because even if you get out of a mission alive, you risk losing your Operator for extended periods of time. If you get hurt badly after completing your first objective, it's worth considering an early Extraction, rather than endangering your Operator further. Stealth is of the utmost importance then, especially on higher difficulties when enemies really pack a punch.

Anyone expecting Rainbow Six Extraction to be a Call of Duty-style action-packed shooter will be disappointed, because this game delivers its thrills very differently. In the early hours, where players still fumble over objectives, gear and enemy types, it has all the suspense of a horror game. The raspy sounds of nearby aliens and the pulsating, squishy noises that nests make before they’re popped are often the only clue that danger is afoot - keeping you on edge as you try to tick off objectives as efficiently as possible. Unfortunately, this feeling fades quickly as you unlock more gear, familiarise yourself with mission objectives and ultimately learn that these enemies are… really dumb.

Artificial intelligence of the third kind 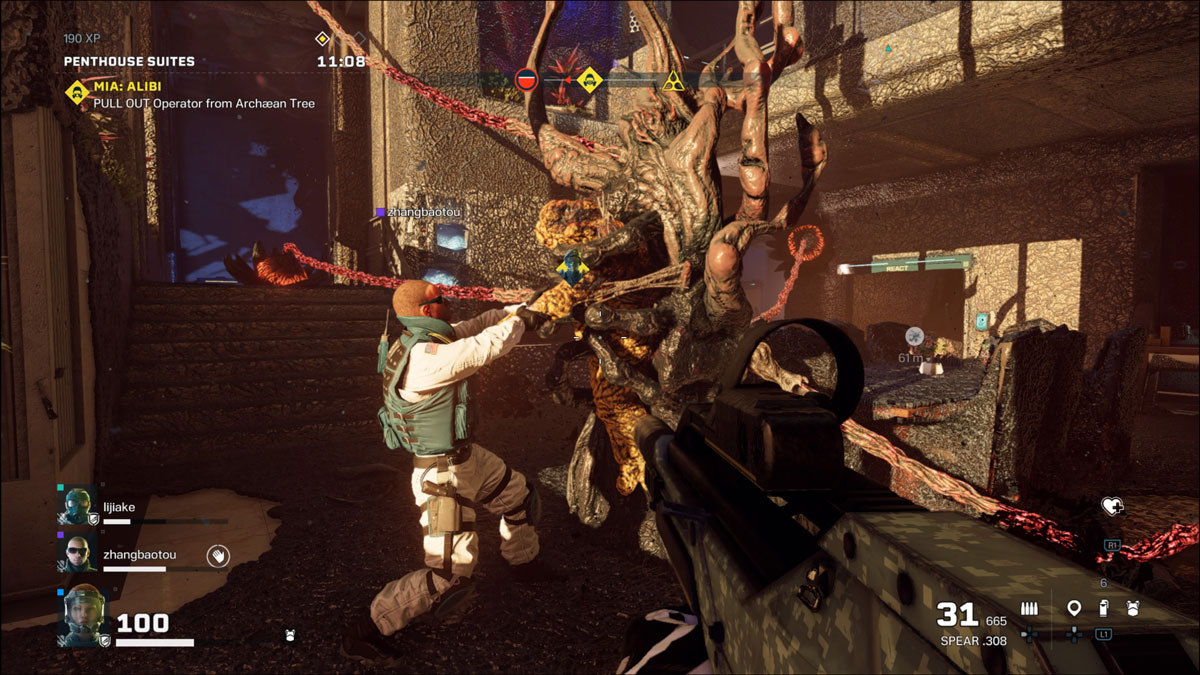 Rainbow Six Extraction’s main gameplay loop is a lot of fun, but it wears out its welcome in a few key ways. Firstly, if you’re going to fight the same creatures for hours on end, you’d want them to be as visually and mechanically interesting as possible. The Archeans don’t even come close to meeting these expectations. Fighting alien black goo is the most uninspired route a sci-fi game can take, and here Extraction takes it with gleeful abandon.

There is such a disappointing lack of creativity in these enemy designs. They don’t just look boring, but fight boring too. You have the standard humanoid goo shapes that attack you by throwing hands, and then other goo shapes that fire off blue bolts of energy at range. After that, you have goo bloaters that explode upon contact - how original. Combat encounters challenge you by filling areas with mobs of enemies, instead of a few especially intimidating creatures. This is because the aliens pose no threat on their own. They often run off in the opposite direction upon seeing you due to poor pathfinding, or stand in place even when alerted to your presence. 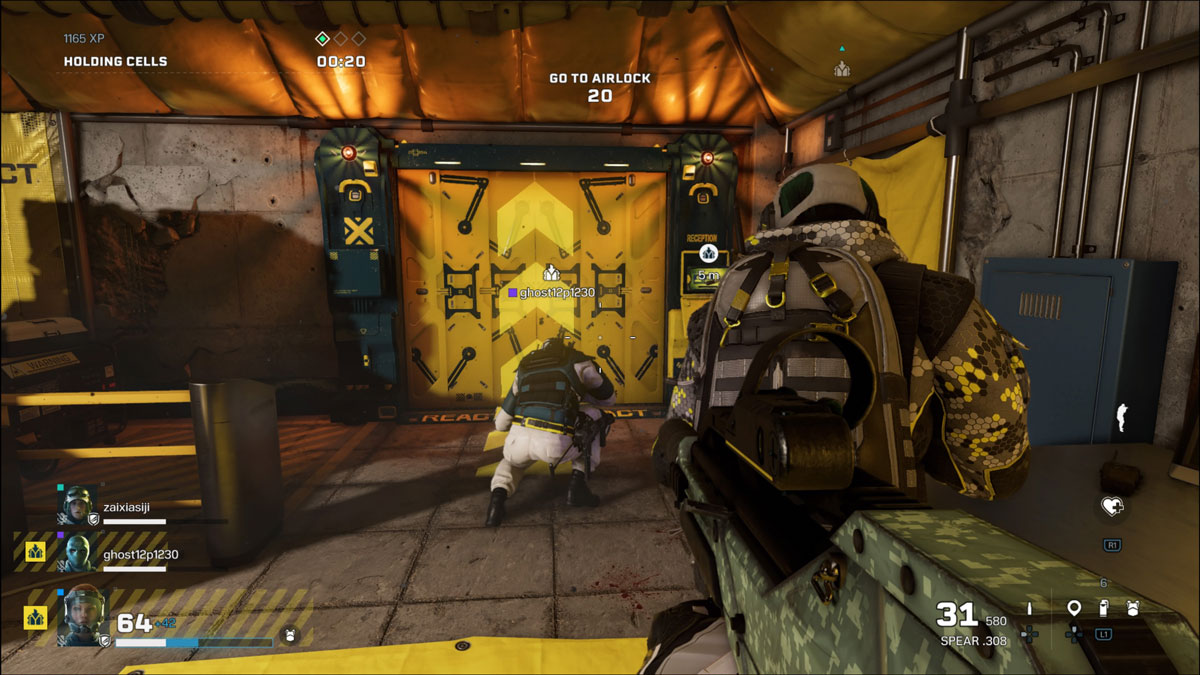 Rainbow Six Extraction is a sci-fi game, but it sure doesn’t act like one. You’re flung headfirst into a worldwide alien invasion, but there is no main cast or story to grip onto as you progress through the game. Lore is doled out via Codex entries that are tedious to read, instead of playing out via cutscenes. Seemingly, this is to keep players moving from one match to the next, without lengthy cutscenes or dramatic story beats bogging them down. While this works to keep the pace up, it does nothing to keep me invested. Ubisoft settled for the bare minimum amount of worldbuilding here, and it shows.

While it can be satisfying to unlock new locations and gear, progression clearly still needs some work. To level up in Rainbow Six Extraction, you have to complete a set of three challenges that usually boil down to pinging nests or eliminating specific enemy types. These battle pass-like challenges can quickly get annoying when you hit an RNG wall, and the game refuses to spawn the exact enemies needed to complete them.

Even when progression isn’t constantly coming to a frustrating halt because of this, it still feels far too slow at first. The majority of Extraction’s maps are locked behind higher levels, which makes the game’s early hours feel needlessly repetitive. There’s a large map pool here, but the game has the audacity to make you grind for it. Not the best system for multiplayer co-op. 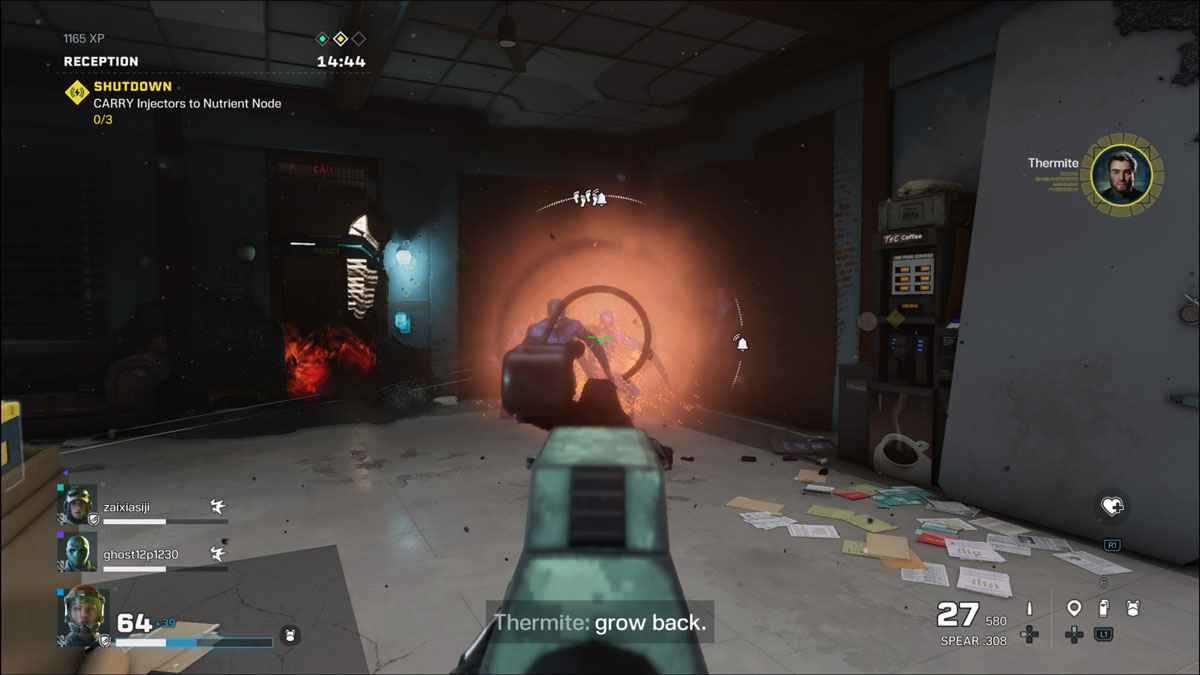 There’s a lot to like about Rainbow Six Extraction. It’s a technically sound multiplayer experience, with great gunplay, interesting map design and a unique focus on stealth gameplay. Unfortunately, it’s sci-fi aspects are utterly drab, its story is basically nonexistent and its enemies are incredibly dumb - all things that do not make for the best PvE experience. Still, if you’re willing to look past these issues and you have a group of friends looking for some multiplayer fun, I can see this game hitting the spot nicely.

Write a Review
Compare This | Specifications
Map design
Objective variety and constant intensity
MIA mechanic is great, low health mechanic too
Operators are cool
Party chat feels like a must in this game
Super bland sci-fi visuals
Boring enemies and lack of an overarching story
Dumb progression challenges
Our articles may contain affiliate links. If you buy through these links, we may earn a small commission.
Sponsored Links