With Intel's Ivy Bridge processors expected to be officially launched on the 29th April, it's time we geared up on more Intel Z77 motherboard previews to whet your appetite. The Intel Z77 Express chipset will be the main component of most DIY-class motherboards even though other variations of the 7-series chipsets exist like the H77 and B75 chipsets for system integrators. We've last showcased the ASUS P8Z77-V Deluxe sometime early last month along with the main highlights one can expect out of the Z77 chipset. Over the following week, we'll be continuing that momentum to showcase more motherboards.

Some of our more savvy readers might notice reviews published by some tech portals, but at this point of time, we're bound by Intel's NDA terms to not reveal any Ivy Bridge related performance matters. In fact, most of those reviews would be based on Sandy Bridge processors. Now who's going to be getting existing processors with new boards when every DIY user knows that new processors are arriving shortly to replace the existing Sandy Bridge CPUs at similar price points? For that reason, our 7-series chipset based reviews will be conducted on Ivy Bridge processors when they are officially available in retail.

Having established the basic details, today we'll be taking a closer look at the MSI Z77A-GD65. Since it is based on the Intel Z77 Express chipset and the same LGA1155 socket (thankfully there are no drastic changes in VRM requirements for the new processors), the board will support the upcoming Ivy Bridge processors using the 22nm fabrication process or the current Sandy Bridge processors fabricated from the 32nm process technology. The motherboard has a pleasant look due to its blue and black color scheme and it bears a striking resemblance to the MSI X79A-GD65 (8D). Besides looks, both boards share the fact that they feature Military Class III components which comprises SFC (super ferrite chokes), Hi-c capacitors and the use of solid capacitors (which has become a norm in most boards). 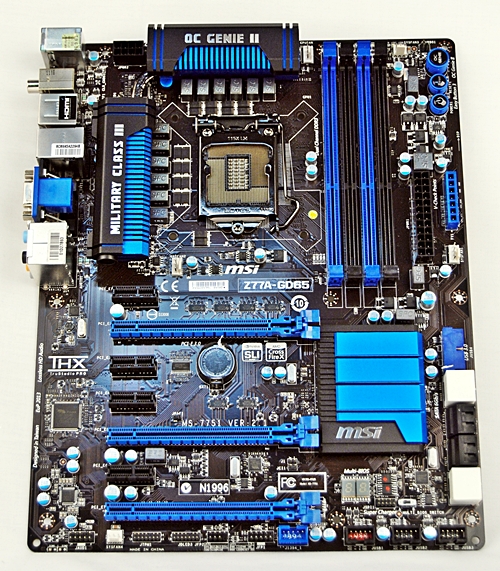 Further to that, MSI Military Class III standard also requires the use of the next generation of DrMOS - DrMOS II that provides an integrated double thermal protection to maximize the lifespan of components. To find out how the different MSI Military Class standards stack up, we've compared them in an earlier article when it was first introduced. Given the board's Military Class III components, MSI has implemented rather hefty heatsinks as parts of its cooling solutions for its VRM components as well as the board's Z77 chipset. 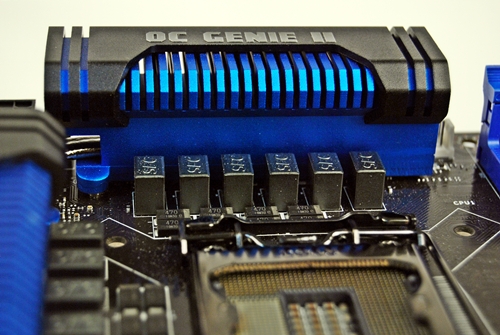 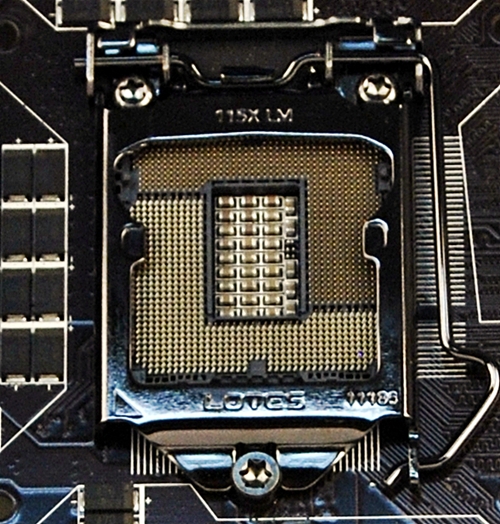 While MSI has retained their well recognized Easy Button 3 which consists of the power, reset and OC Genie buttons, for some odd reason, they've been shifted fro the usual lower half of the board to the upper corner. While it makes sense if the board is used an open environment without a casing, once the board is settled within a chassis and fully wired up, this corner becomes almost unusable. We're a bit disappointed with MSI's decision on this aspect, but this move has better allowed them to place all other onboard motherboard connectors on the bottom of the board. More on that later. 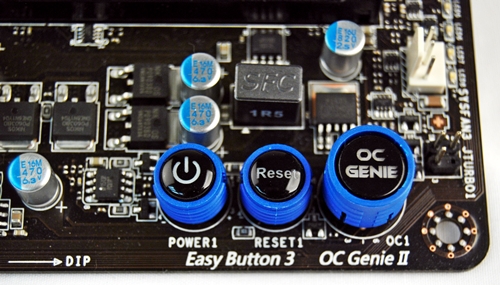