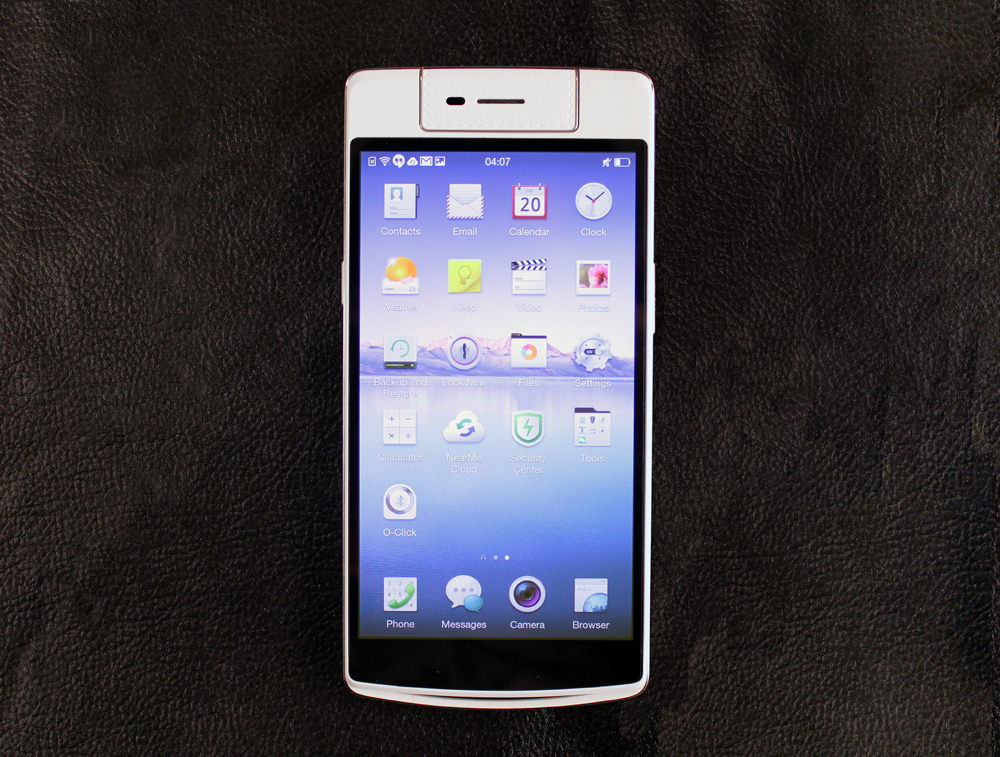 Last year, Oppo released the N1, an oddball phablet with a swiveling camera that can point in both directions, letting you take both regular photos and front-facing selfies with its single 13MP shooter. Now, Oppo has released a sequel, the N3. What happened to the N2? It doesn't exist - maybe Oppo just likes odd numbers?

What's new about the N3? It's a bit smaller now, with a 5.5-inch display instead of the N1's 5.9-inch screen, and its a bit more powerful too: you'll find a Qualcomm Snapdragon 801 (2.3GHz) processor inside it. The swiveling camera gimmick is back, but this time it's motorized so you can operate it with the touchscreen instead of having to manually move it into place like some kind of caveman.

The Oppo N3 is available now for S$849. Local tertiary-level students (university or polytechnic) can receive a $50 discount off the N3 by showing their valid student ID card at Oppo's Concept Store in Suntec City.

Here's a closer look at the N3's specs:

Despite shrinking in overall size, the N3 is still a big phone. Over the last couple of years, plus size phablets have shrunk in thickness and overall size as bezels have become smaller and batteries lighter and thinner. Unfortunately, the N3 is a throwback to the way things were with thick bezels and a hefty weight of 192g. Compared to other phablets, like the similarly 5.5-inch LG G3, it looks and feels positively obese, and it's noticeably heavier than the class-leading LG G3's light weight of 149g.

Most of the phone has a matte plastic finish, with an aluminum band running around the edge for added stability. Unfortunately, the metal frame also makes the N3 rather uncomfortable to hold, as its thin hard edge bites into your palm. 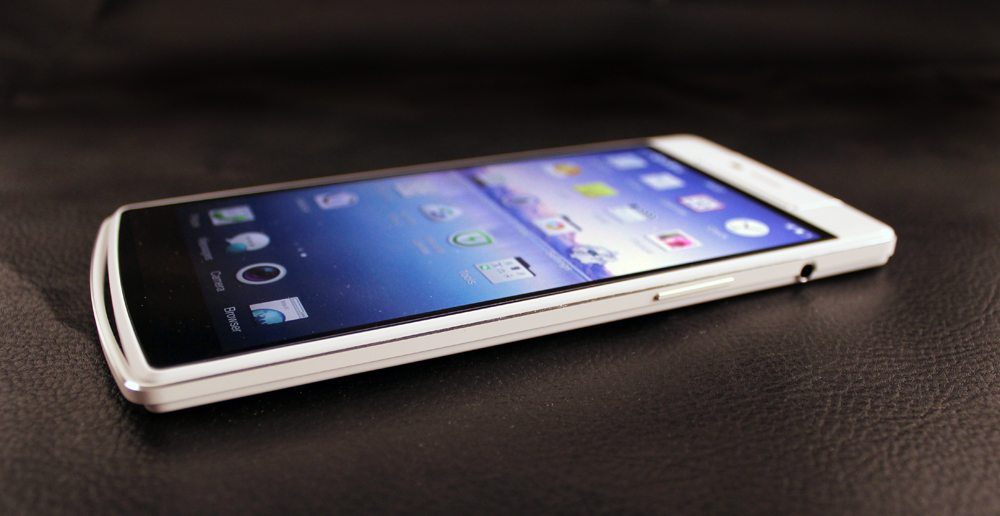 For some reason, the swiveling camera module has a completely different finish, and sports a faux leather that looks like it's been made from the leftovers of a Samsung Galaxy Note 4. There’s even fake stitching around the edge! 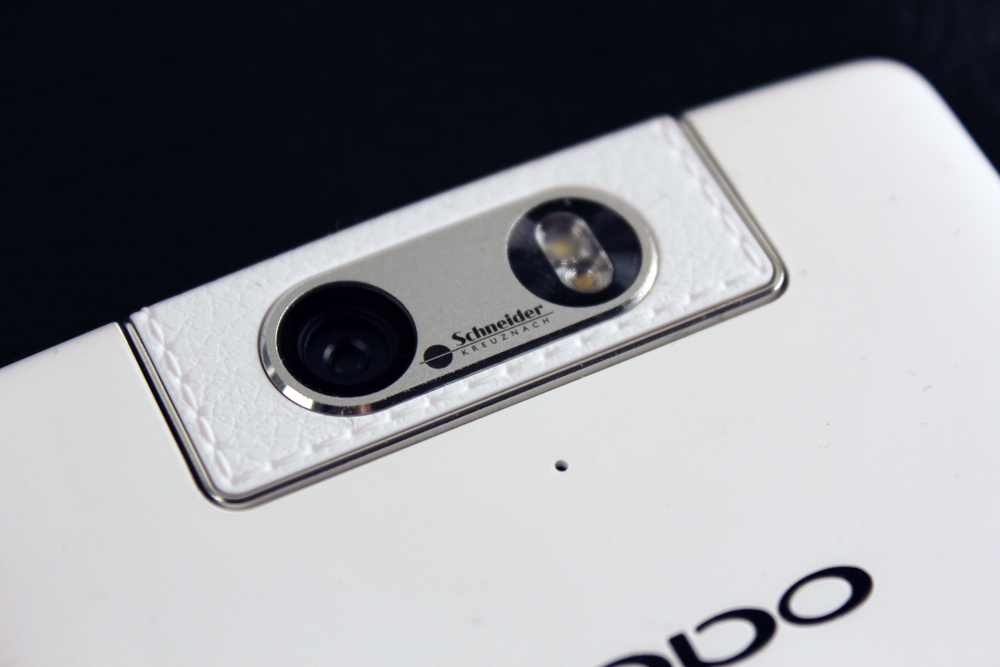 The power button can be found on the left side of the device, which is a fairly unusual location. Most phones have it located on the right, which is more natural for a right-hander to press. As mentioned, the phone is quite wide, so it never really feels natural stretching for the power button unless you hold the phone in your left hand.

On the back of the phone, you'll find a fingerprint scanner in a similar position as the back buttons on the LG G3. The scanner itself is a physical clicky button that you have to press to activate. Once pressed, just hold your finger down and it will scan, no swiping motion required. Surprisingly, the fingerprint scanner works really well, and is probably only second to Apple's Touch ID scanner in speed and usability. One minor annoyance is that the fingerprint button cannot be used to wake the phone up if you're not using fingerprint security (it does nothing on its own). If Oppo had just added this functionality it could have removed the awkwardly positioned left power button entirely. 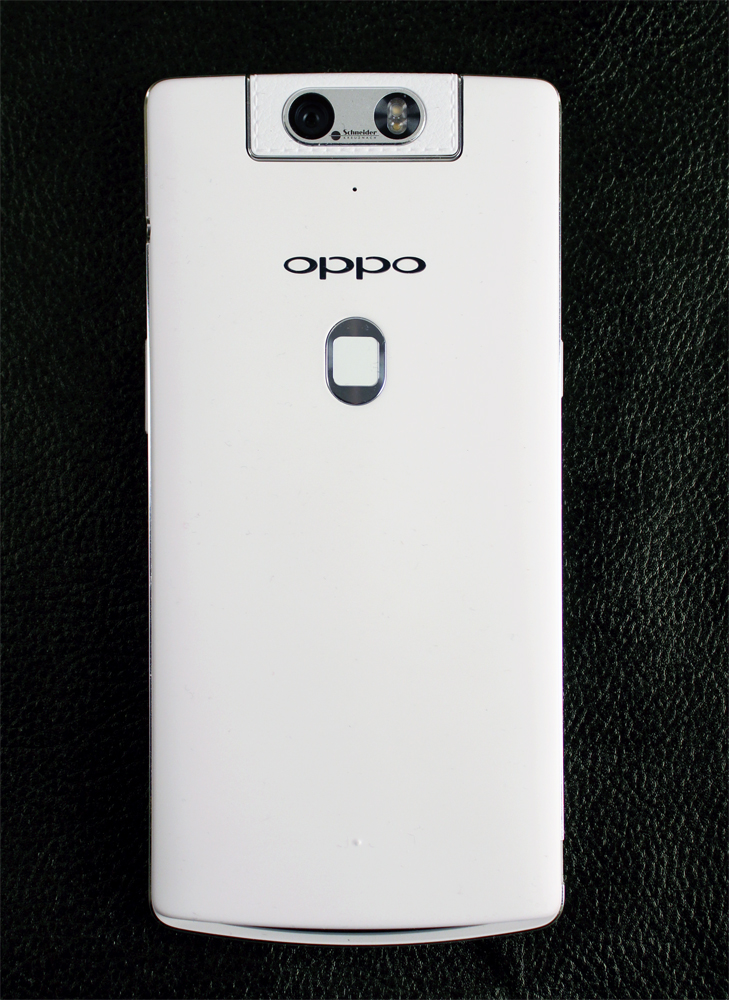 On the right side of the device, you'll find the volume rocker, and bizarrely, Oppo has also stuck the headphone port here. As the phone is already quite wide, it will barely fit into your pocket as it is. Now add a headphone jack sticking out the side and there's basically no chance of that happening. Generally speaking, headphone ports are located on either the top or bottom, which lets you leave the headphone jack sticking out of the top of your pocket. 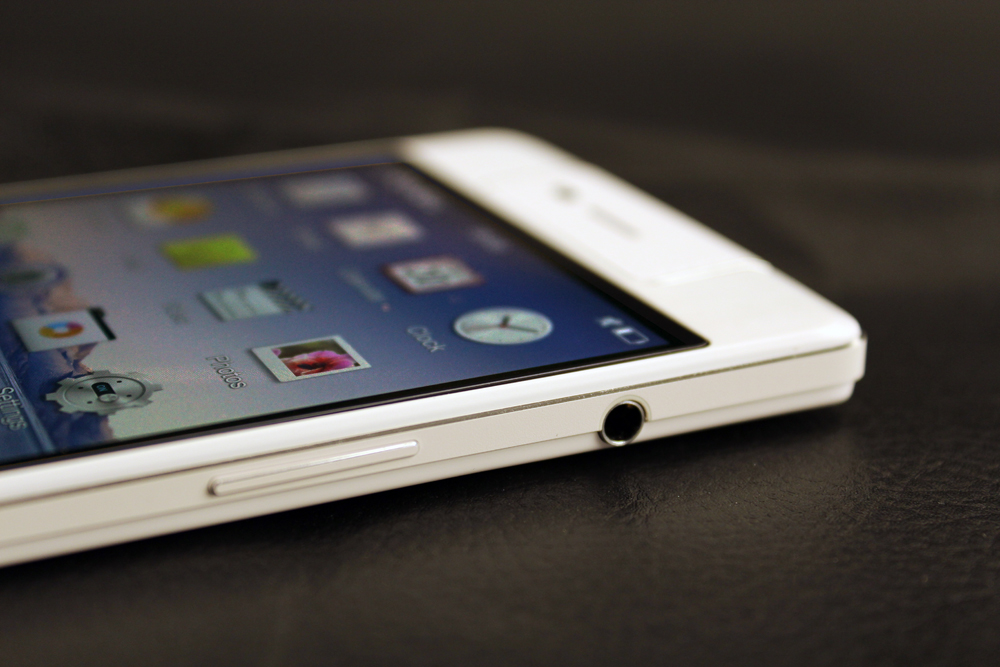 The micro-USB port is located on the left side at the bottom edge, which is fine, but it makes the phone annoying to use while charging. Speaking of charging, let me take a moment to praise the fantastic VOOC fast charger that comes with the N3. It will charge the phone from 0 to 75 percent in just 30 minutes. After that, it tails off a bit, and takes about an hour to get to full. Anyway, there's no room for the micro-USB port at the bottom of the phone because the aluminum frame curves away from the main body, leaving a gap with an LED notification light that glows whenever you have any new messages or unread emails, something Oppo calls the Skyline notification bar. Thanks to the gap, you can see the notification light whether the phone is face up or down, but unfortunately it's a bit dim and hard to spot unless you're sitting around in the dark. While seemingly useful, we can't help but feel that the design just adds more size to an already huge phone. 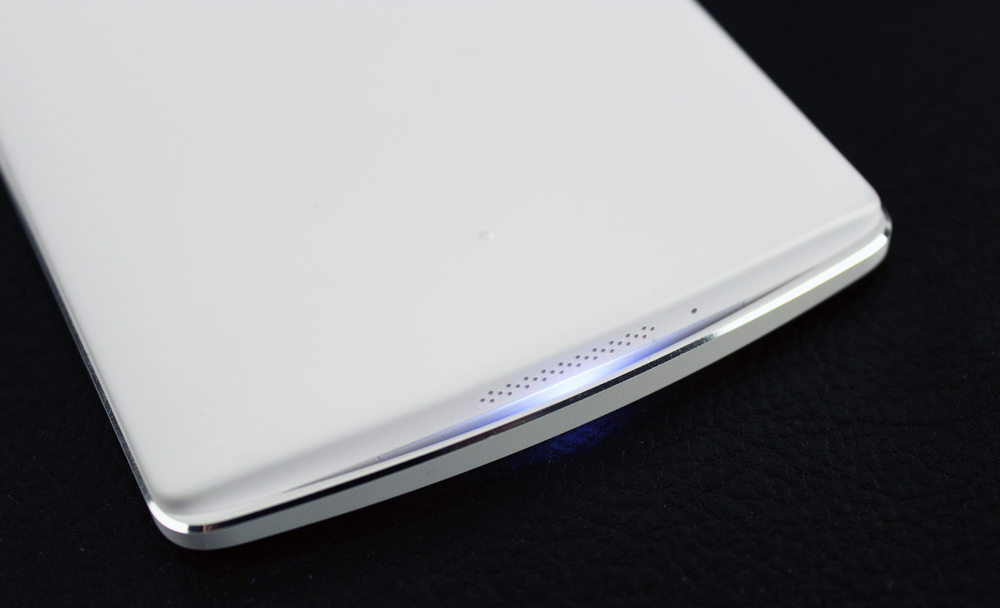 As with many smartphones from Chinese companies, the N3 has dual-SIM capability, with one micro-SIM slot and one nano-SIM slot, found in a single push pin tray on the left-hand side. It's worth noting that there is also an 'international model' that replaces the nano-SIM slot with a microSD slot, letting you expand the phone's 32GB internal storage up to 128GB. The model sold in Singapore has dual-SIM cards and no expandable storage.

The Oppo N3 has a 5.5-inch IPS LCD display with a 1,920 x 1,080 pixels resolution (403 ppi), making it on par with the Apple iPhone 6 Plus, but somewhat behind the QHD resolution of the LG G3 (538 ppi). Having said that, it certainly looks sharp enough, and you would be hard pressed to see any difference in clarity between the N3 and the G3. Colors are rendered naturally, and the screen is also very bright with great viewing angles. One area where it isn't quite as good is its contrast levels, which aren't as deep as they could be. Turn the lights off and watch a movie and you'll notice the black areas of the screen look a little bluish. 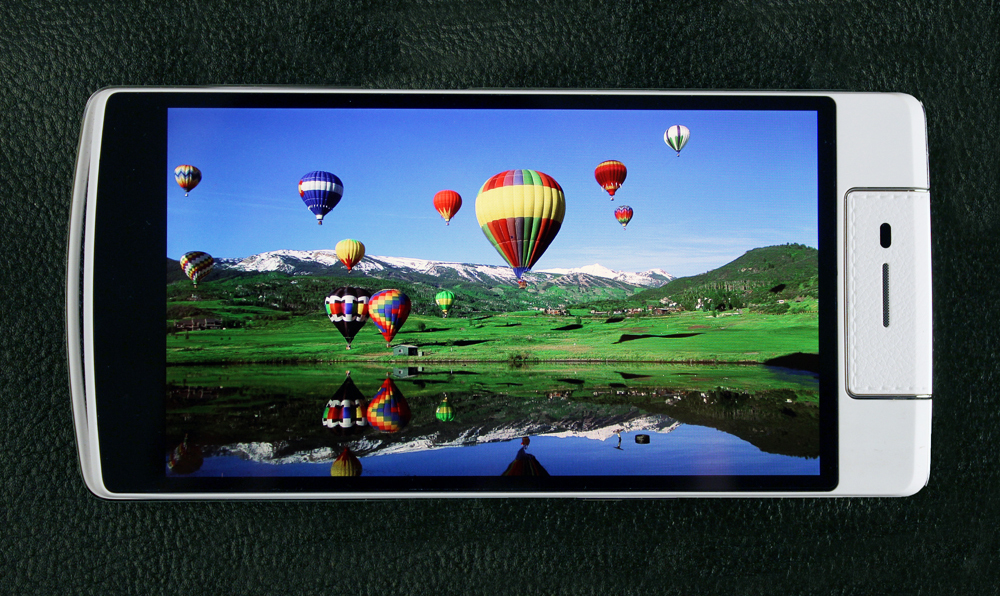 Audio on the N3 is provided via a single speaker, located at the bottom, behind the curvy part of its metal frame. While there's just one speaker, it's fairly loud and maintains decent clarity even at high volumes. The phone also comes equipped with MaxxAudio software which can be used to crank up the volume even louder. 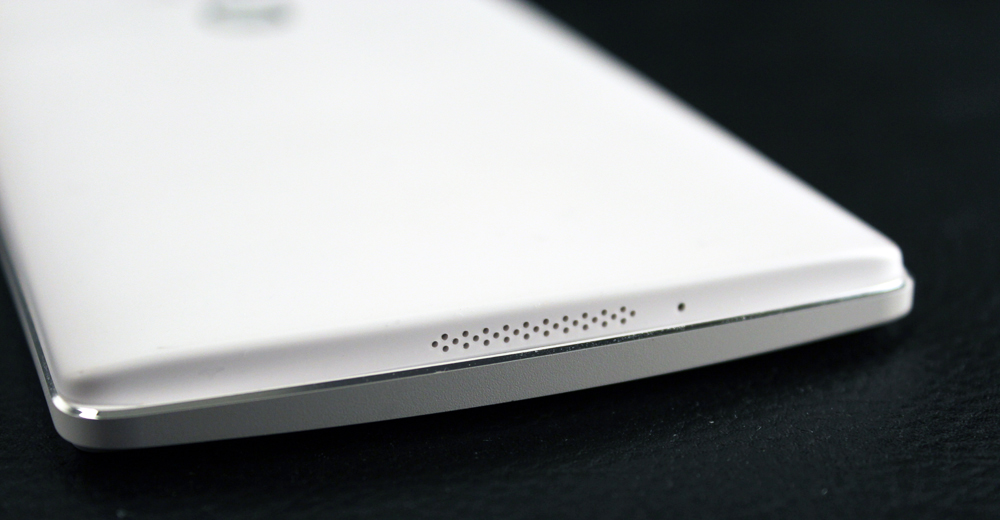 The N3 runs on Oppo's Color OS v2.0, which is a heavily skinned version of Android 4.4 KitKat. Unlike the N1, there's no option for a factory-installed Cyanogenmod this time around. Color OS is a pretty radical departure from stock Android, with the main difference being the complete removal of the app drawer. Instead, all of your apps are found on separate home screens, similar to iOS. Color OS also includes a custom lockscreen, homescreen, and settings menu, as well as support for custom themes. Interestingly, one of the pre-installed themes is called Jelly Bean, which gets you a bit closer to a stock Android UI (minus the apps drawer of course). 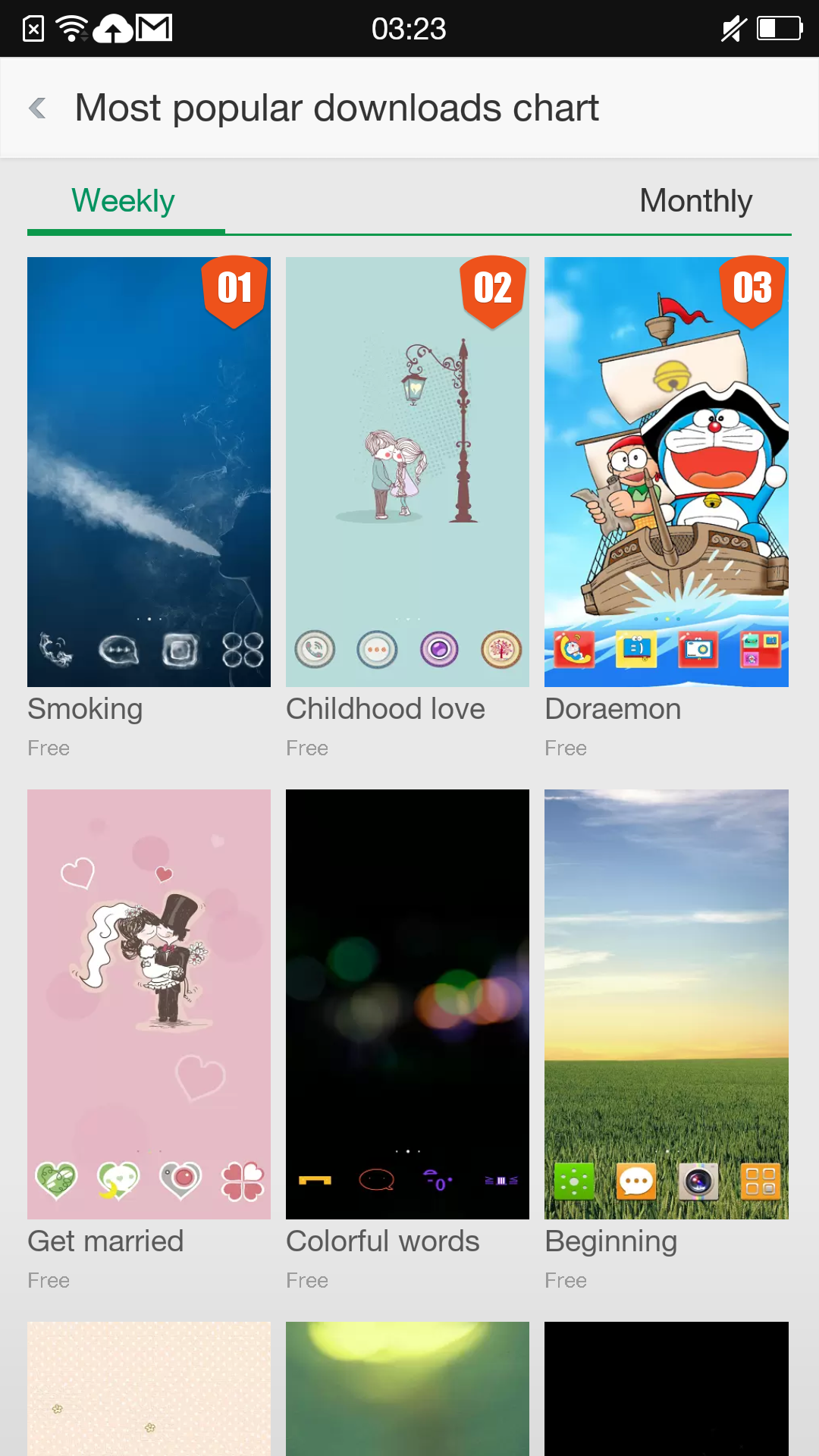 One of the more handy features of Color OS is the gesture board. You can access it by swiping up from the bottom of the screen. Once opened, you can perform various gestures to launch different apps. For example, drawing a circle opens the camera app. You can customize which apps you want to assign to specific gestures, and you can even create your own custom gestures. 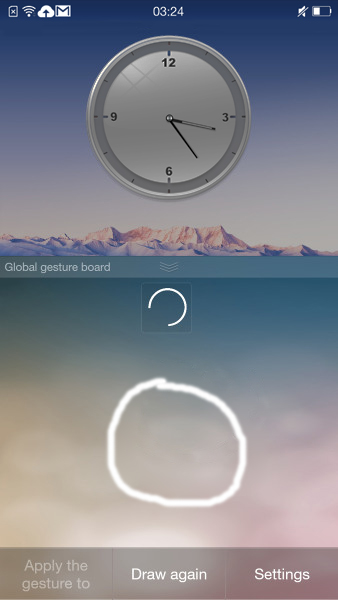 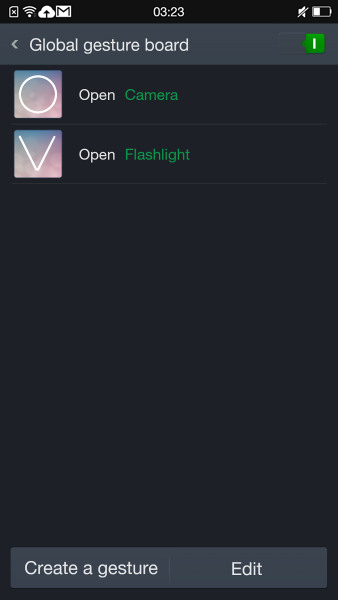 Slightly confusingly, there's also a different Gesture & motion menu. The difference is that these gestures are used for specific functions, whereas the gesture board is used for launching apps. For example, swiping with all three fingers across the screen will take a screenshot. The Motion options are quite useful too - flipping the device over will mute the ringer, and raising the phone to your ear will automatically answer an incoming call. 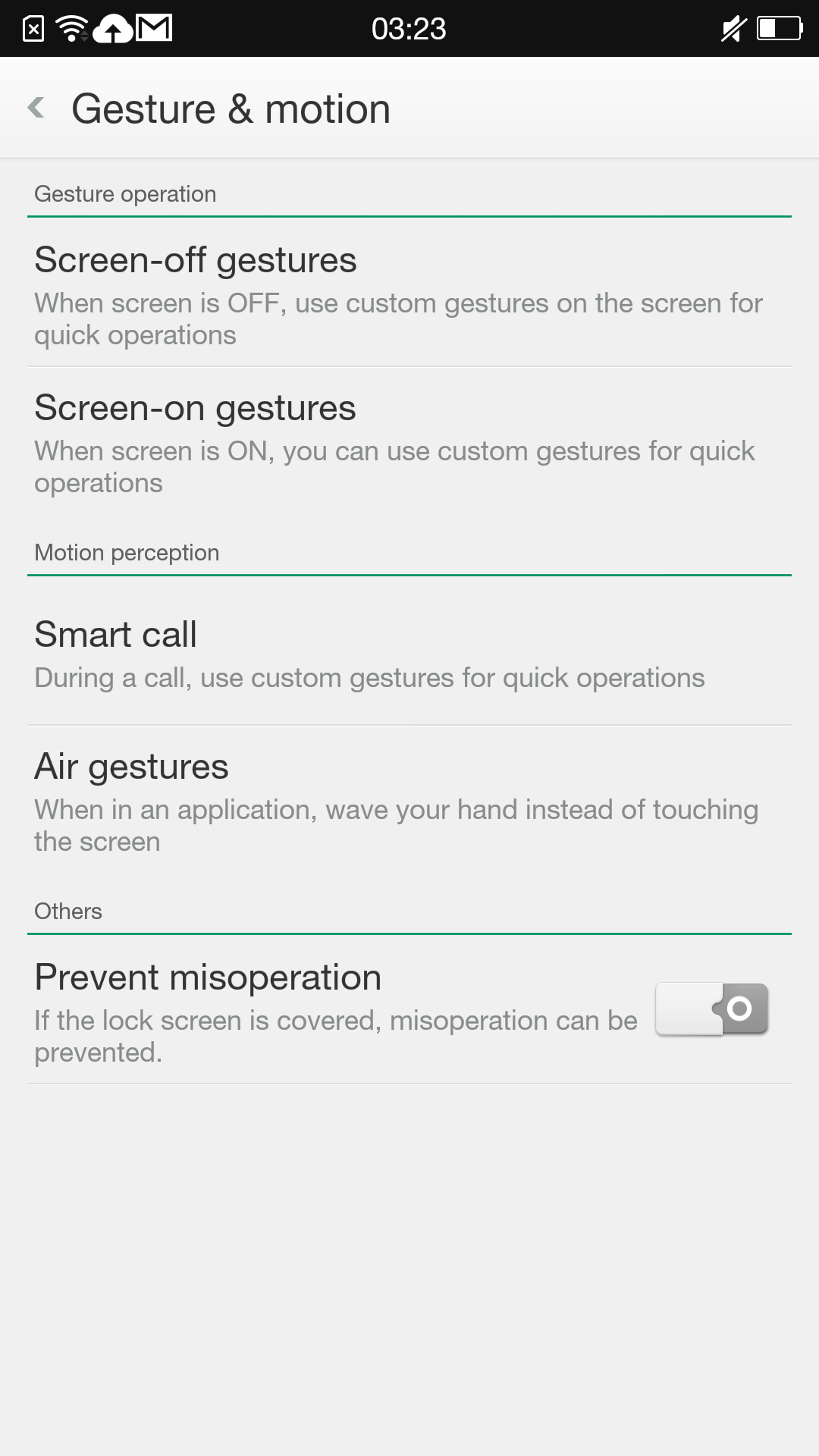 As with most phablets, the N3 has a one-handed operation mode. You can activate it with an upward swipe from the bottom left or right corner, which will shrink the UI down to that corner, making it easier to reach everything. 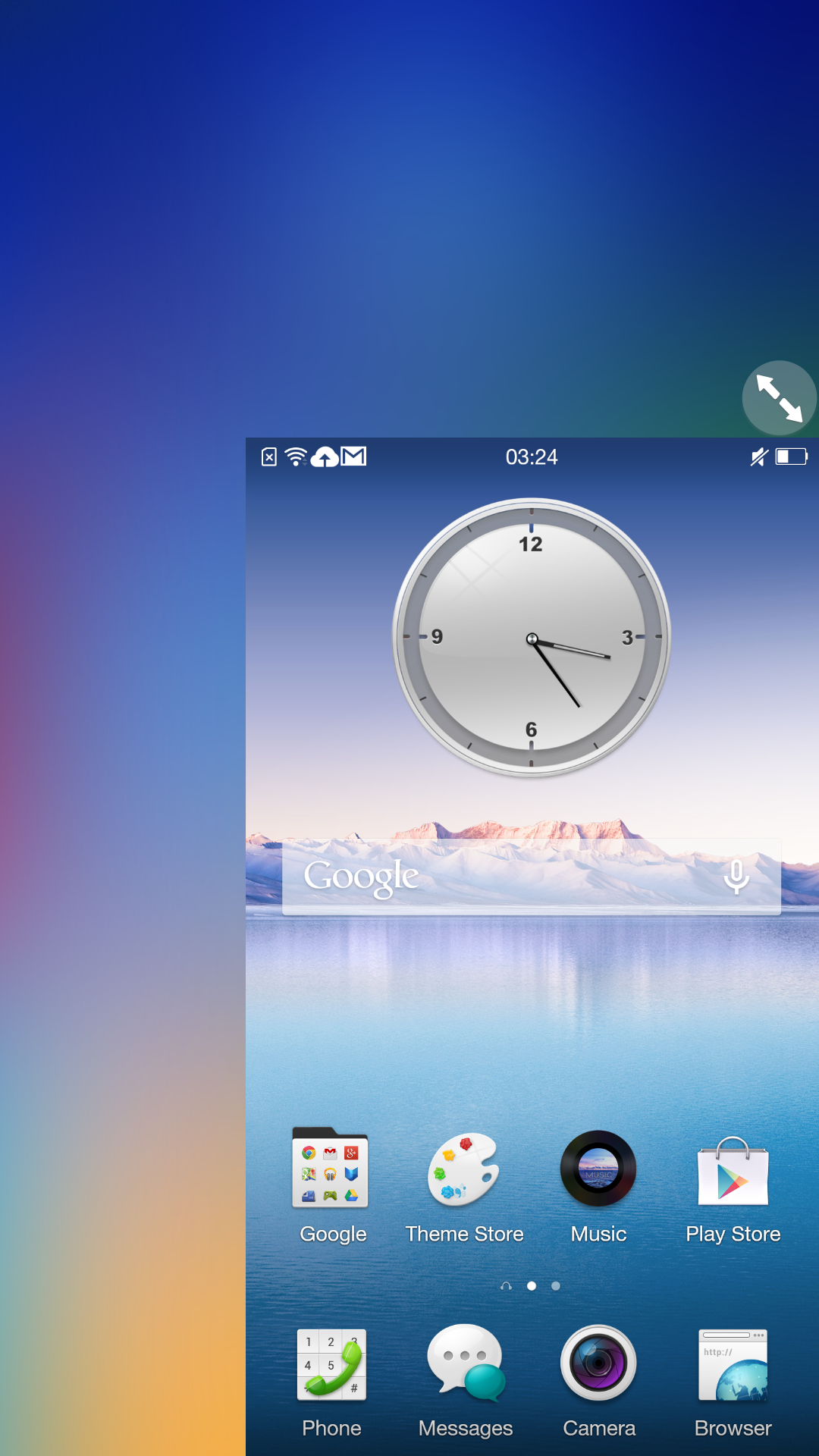 Write a Review
Compare This | Specifications
Motorized swiveling 16MP camera
Good camera performance
Useful gesture and motion controls
Dual SIM - micro and nano SIM slots
Large and heavy
Unconventional button and port placement
Benchmark performance could be a bit better
No expandable storage
Our articles may contain affiliate links. If you buy through these links, we may earn a small commission.