Nothing Ear (1) earbuds review: Nothing special or something worth considering?

Nothing Ear (1) earbuds review: Nothing special or something worth considering?

Note: This review was first published on 8 December 2021. 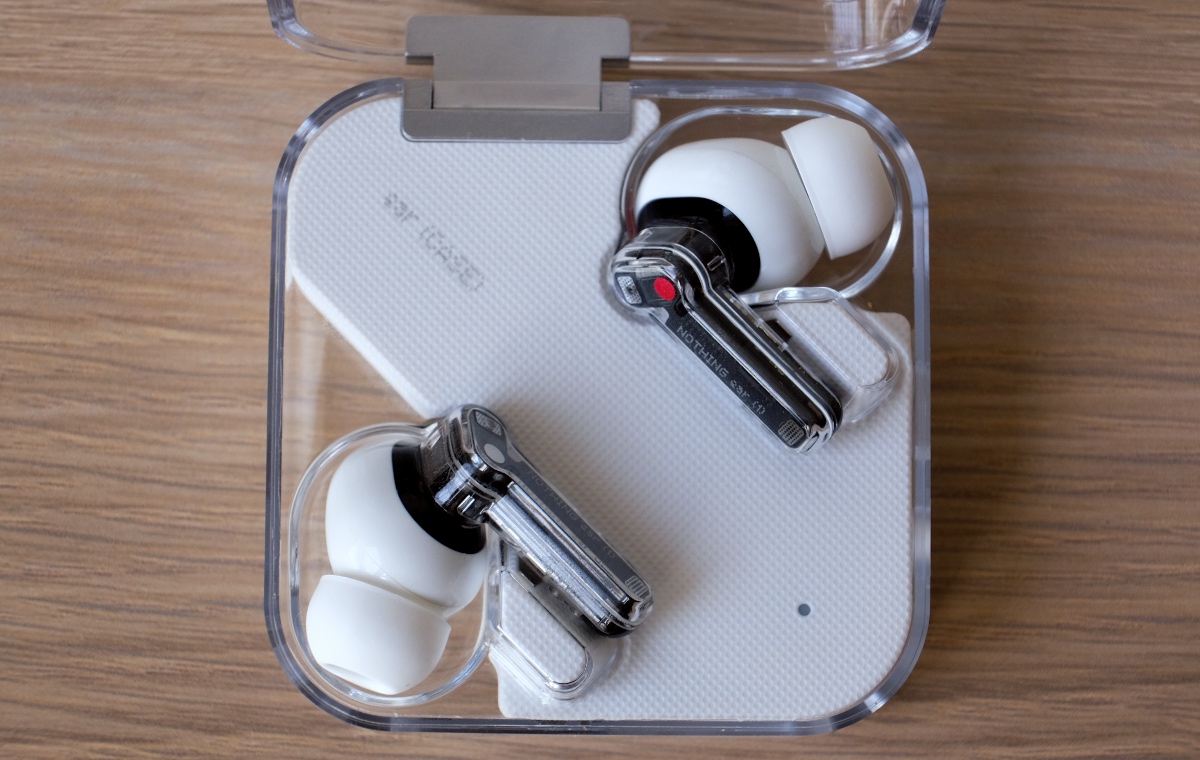 The Ear 1s from Nothing made quite the splash when they were announced earlier this year. There are a few reasons why. To start, they are Nothing’s first product. Nothing, in case it’s new to you, is Carl Pei’s latest venture. Who's Carl Pei? He is one of OnePlus’ co-founders. Nothing is backed by investors such as Tony Fadell, Steve Huffman, Kevin Lin, and Casey Neistat – all big names in the tech/internet/consumer electronics/entertainment industry. But most of all, the Ear 1 grabbed headlines because of its price and features. It costs US$99 and features active noise cancellation, a wireless charging case, and IPX4 water resistance. That’s a potent combination in the world of true wireless earbuds.

Let’s talk price first because, let’s face it, the main reason why people took notice is mostly that it was attractively priced. The Ear 1s will retail locally for S$179. Yes, that’s quite a fair bit more than what we were expecting compared to US pricing, even if you factor in shipping. That’s the 'Singapore tax' for you. But even so, S$179 isn’t so bad if it sounds good and its active noise cancellation feature worked well. Still, it does take some of the shine off of the Ear 1s. 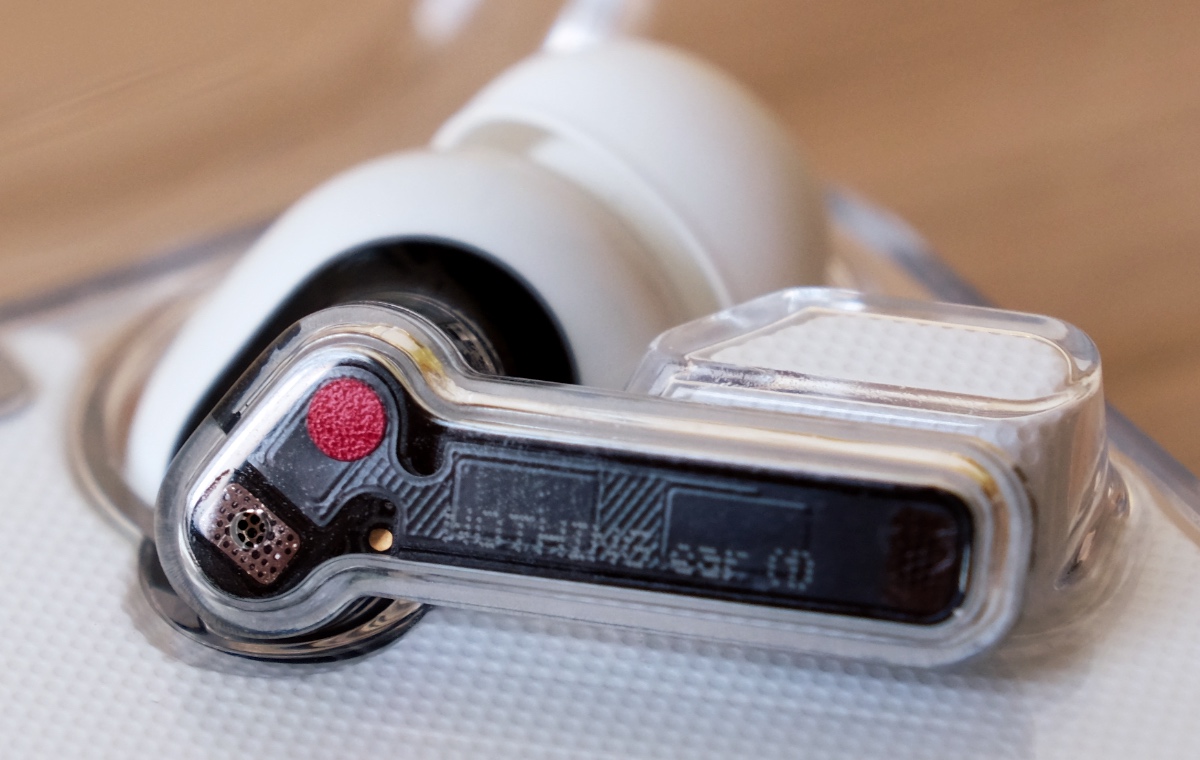 The Ear 1s have an unconventional transparent aesthetic. You can see through the stems and peek at the circuitry, sensors, and magnets. The buds themselves closely resemble Apple’s AirPods Pro. They have an in-ear design, a stubby rectangular stem, and a somewhat bulbous enclosure. Nothing provides three sizes of silicone ear tips to help owners get comfortable. Fit wasn’t an issue. I found them to be snug, comfy, and could easily wear them for hours. Of course, your mileage may vary. I like how the right earbud has a small red dot and the left earbud has a small white dot to help owners tell quickly which earbud should go into which ear. The buds are also IPX4 water-resistant which means they can withstand “water splashes from any direction.” Practically speaking, it just means that you can exercise with them, even in the rain. 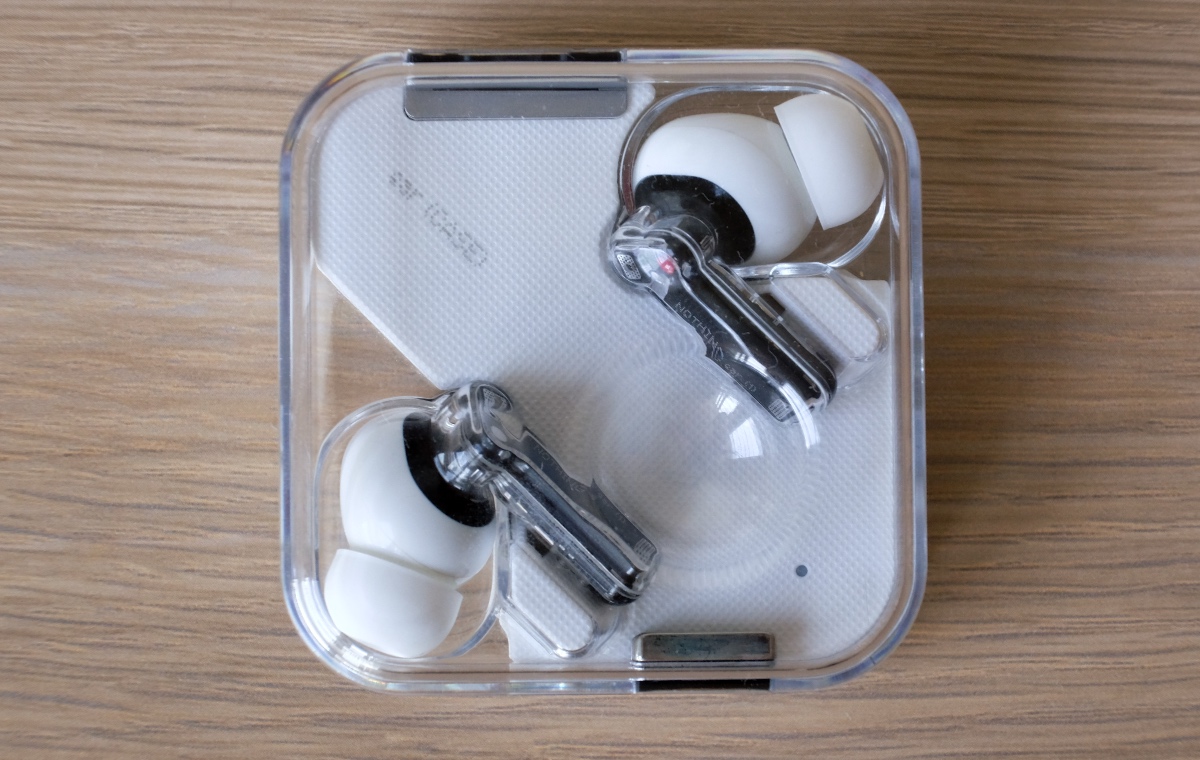 The charging case is the first I’ve come across to have a transparent cover. One upside to this is that you can instantly see if you have remembered to keep and charge your earbuds. It charges via USB-C and wireless charging, and it provides an additional 24 hours of listening time with ANC on or 34 hours with ANC off. The earbuds themselves last up to 4 hours with ANC on and 5.7 hours with ANC off. The case has a quick charging function that Nothing says will deliver up to 8 hours of listening time with a 10-minute charge – via wired USB-C charging, of course. I found that the Ear 1s could easily last a workday with on and off listening.

Considering its price, the Ear 1s have a surprising amount of features. The highlight is obviously active noise cancellation which works well enough. Combined with the passive isolation offered by the silicone tips, it blocks out a significant amount of noise, but it isn’t a match for luminaries like the AirPods Pro and Sony WF-1000XM4. It has a transparency mode that lets in outside noise and like most other earbuds’ implementation, it sounds highly digitised and unnatural. 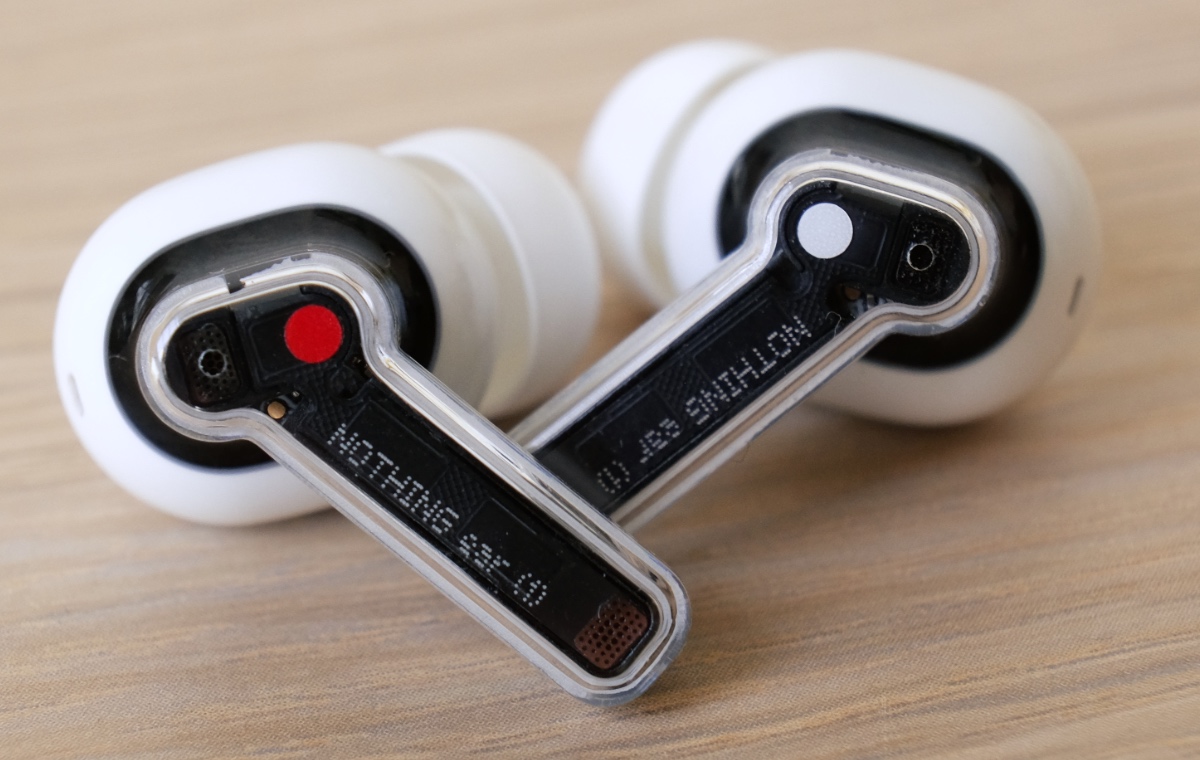 The mics are decent in a quiet environment though they can make the user sound muddled. However, they are not very good at blocking out noise so don’t use them to take a call with a fan pointing at you or in a noisy environment.

The Ear 1s redeem themselves somewhat with an array of neat tricks. There are sensors that enable auto-play and pause. And one cool thing that it does when you remove the earbuds in one ear is that the other automatically switches into transparency mode until you put both of them back in your ears. 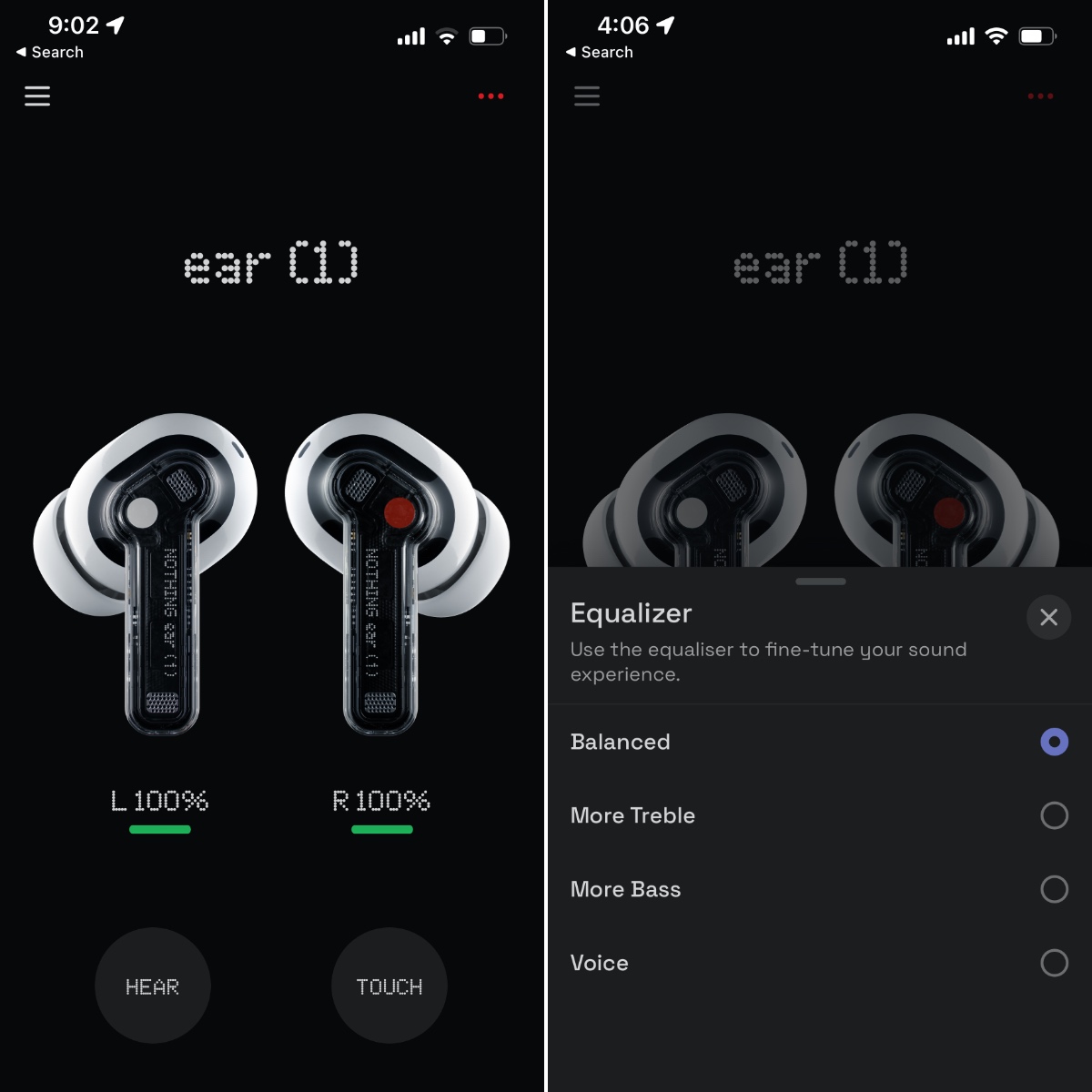 Like most earbuds, the Ear 1s have touch controls. And actually, it’s one of the better implementations, because right out of the box, the Ear 1s are configured to allow owners to switch between noise-cancelling modes, control playback, and adjust the volume. The controls are sensitive and work well enough. Furthermore, if you can customise them through the Ear (1) app. My only complaint is that it uses an ambiguous series of chimes to let you know when you are switching modes. I would prefer voice prompts like how Sony and Sennheiser do it. Speaking of the app, it's basic but sufficient. You can customise the touch controls, an equaliser to adjust the sound, the ability to update the buds' firmware, and that's about it. 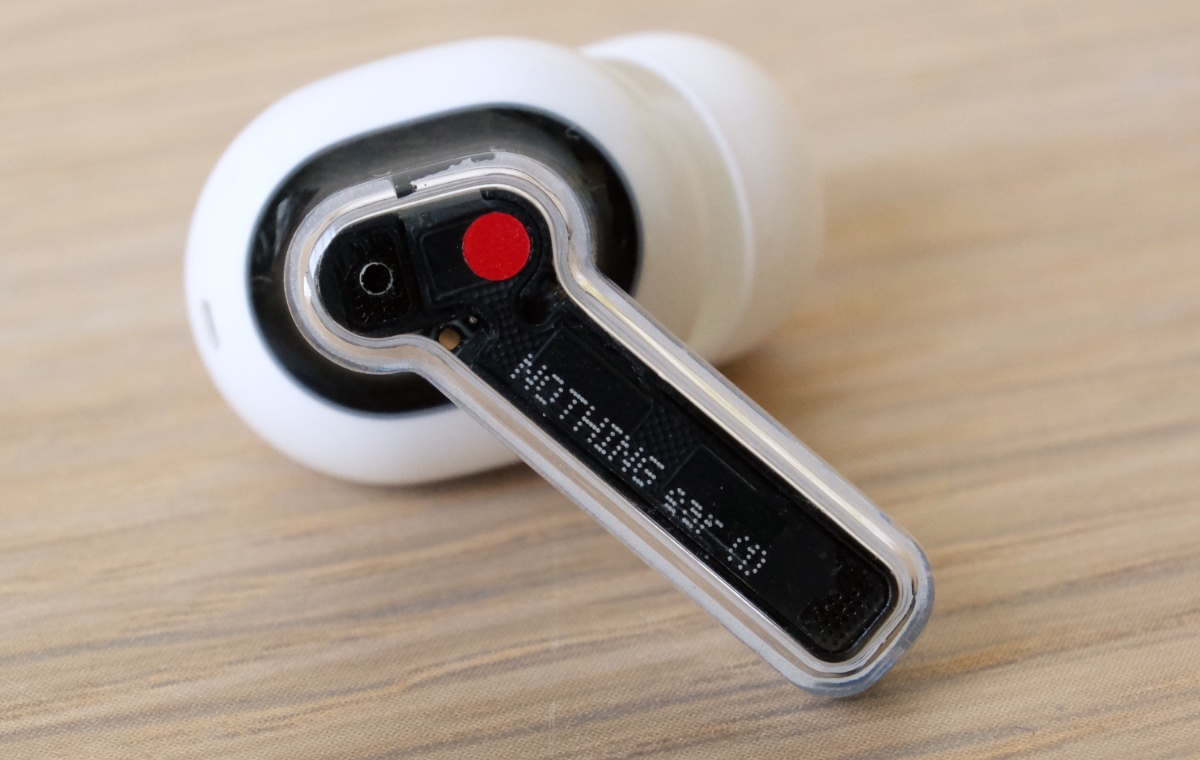 Pairing happens very quickly and the connection is very stable and I noticed almost no random dropouts during my time with it. However, I noticed that range was a bit poorer than other earbuds I’ve experienced. Also, latency can sometimes be an issue. This isn’t a problem nor is it apparent at all when you are listening to music but it can be distracting when watching videos (depending on the severity) because the audio is out of sync with what you are seeing on screen. Happily, this issue seems to have been rectified with a recent firmware fix.

Inside, the Ear 1s have fairly large 11.6mm dynamic drivers with graphene diaphragms. Graphene is a popular material because of its stiffness. Chambers within the buds are used to shape the frequency response which Nothing says has been tuned by Teenage Engineering, a Swedish consumer electronics company famous for its OP-1 synthesiser (Carl Pei, the founder of Nothing, grew up in Sweden).

The sound is decent but nothing special. Like so many other earbuds, the bass is emphasised and the overall tonality can be described as warm. Luckily, the bass is impactful but fairly clean. There’s some bloat that impedes on the mid-range but it’s acceptable. The issue with the Ear 1s is its uneven transition from the mids to the treble. Mids are very slightly recessed but it comes back up again in the upper mids, which gives most female vocals and some instruments like the piano an unusual presentation where it lacks body and sounds bright.

As for technical performance, the Ear 1s are decidedly average. It doesn’t sound particularly detailed but neither does it sound like a muddled mess. It’s quite easy to pick out various instruments in the mix and the headspace that these buds project is decent. It doesn’t sound cramped as if the sound is stuck in the head. Taken as a whole, the Ear 1s will sound pleasant enough for most people.

I know some people won’t be able to get over the fact that the Ear 1s’ local retail price (S$179) is much higher than the US$99 US price that made headlines all over the world. But considering what the Ear 1s offer, even at that elevated price, I’d argue that it still offers good value for money. 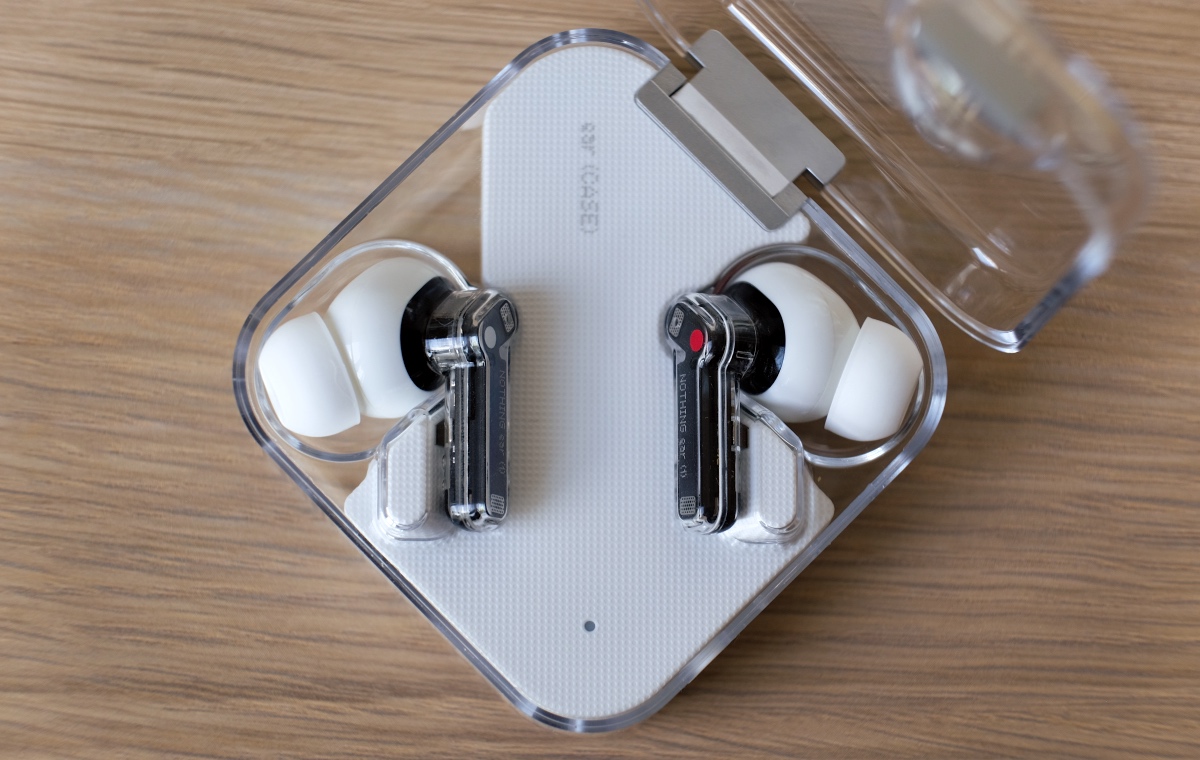 To wit, how many true wireless earbuds can you name at this price that has the following: active noise cancellation, wireless charging case, sensors in the earbuds, IPX4 water resistance, accompanying app management, and decent sound quality. Fact is, the Ear 1s’ rivals at this price point typically only cover one or two bases and not all of them.

Sure, one could make the argument that the Ear 1s’ performance is not class-leading. Active noise cancellation is only average and its audio performance is not only going to blow anyone’s socks off. But to do that would be missing the point. Nothing isn’t pitching this as flagship-class true wireless earbuds. It’s the earbuds that anyone can buy and be happy with. And to be fair, its overall performance is more than decent enough – especially at its price. Ultimately, the Ear 1s from Nothing are a great choice for anyone who is looking for full-featured, well-rounded true wireless earbuds that won’t leave a huge gaping hole in their pockets.

Priced at S$179, you can find them on the Nothing Flagship Store on Lazada.

Write a Review
Compare This | Specifications
Interesting, unique aesthetic
Loads of features
Comfortable fit
Pleasant sound
Value for money
Wireless charging is supported
Local pricing less attractive
Active noise cancellation is only so-so
No support for multipoint connection
Only support for AAC and SBC codecs
Our articles may contain affiliate links. If you buy through these links, we may earn a small commission.
Sponsored Links