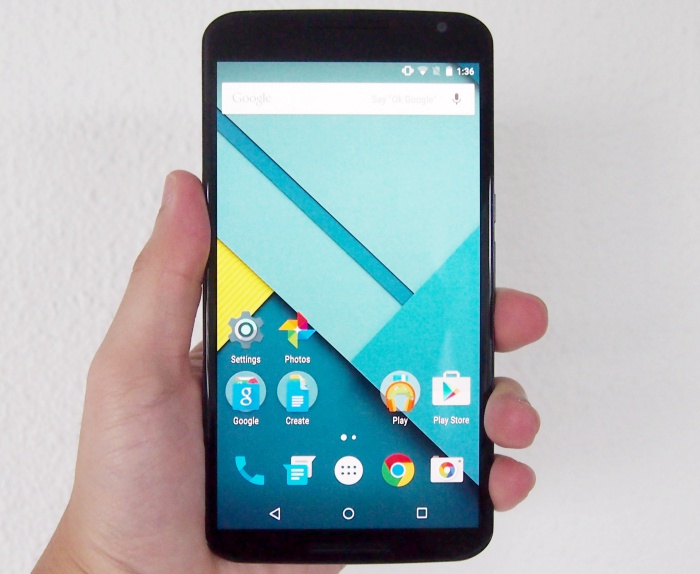 2014 was the year when phablets became mainstream; not only did Apple release two bigger iPhones - one of which is categorised as a phablet due to its 5.5-inch display -, Google also released its first Nexus phablet, the Nexus 6 which was manufactured by Motorola.

Google also broke away from its strategy of providing good hardware and specs at significantly lower prices than other Android flagship smartphones. The Nexus 6 is priced at a whopping US$649 (32GB) and US$699 (64GB). These prices work out to be about S$888 and S$956 respectively. By contrast, the previous Nexus 5 was priced at US$349 (16GB) and US$399 (32GB).

Nexus phones were largely absent in the local market and the last Nexus phone to be officially available in our market was the Nexus 4, which was priced very much higher than the heavily subsided counterpart on the Google Play Store. Therefore, many consumers in Singapore were pleasantly surprised to hear that the Nexus 6 was going to be available in the local channel market from February 28, thanks to local distributor BrightStar.

The official retail price of S$998 (32GB) places the Nexus 6 firmly in the space of Android flagship smartphones. While some may lament the higher retail price, it is important to note that the local set comes with one-year warranty which is something that you won't enjoy if you purchase an export set. With these factors in mind, let's kick start the review of the Nexus 6 and see how Google's first phablet fares against the other giants. Here's a quick overview of the Nexus phone family since its humble beginning:

With the exception of the LG Nexus 5, prior generations of Nexus phones look almost similar to the devices they were modelled after. The Nexus 6 is another fine example; it is essentially a bigger variant of the Motorola Moto X (2014) and it's hard to ignore the similarities. 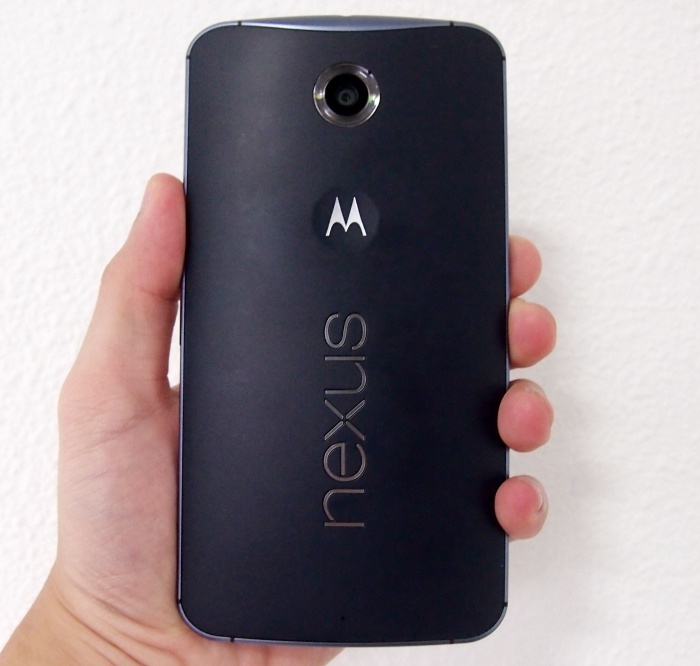 The Nexus 6 adopts the same curvy form factor as the Moto X (2014) although its bigger dimensions affect the usability of the device to a great extent. Due to the 0.76-inch difference in display size and bigger battery, the Nexus 6 is almost 20mm taller, 10mm wider and 40g heavier than the Moto X (2014). Compared to the other phablets, the Nexus 6 easily trumps the competition in size (with the exception of the rather bulky Oppo N3). What's surprising is that we felt it bulkier than even the 6-inch Huawei Ascend Mate 7, which was already one of the bigger phones around. Let's take a look at the figures:

While the figures might seem to suggest that the Motorola Nexus 6 is only slightly bulkier than most other phablets, in reality, these numbers mean a lot more. Like all devices with display sizes above 5.5-inches, it is near impossible to use it comfortably in one hand and is best used with two hands.

When it comes to build quality, the Nexus 6 fares well despite lacking the all-metal chassis of the Apple iPhone 6 Plus and HTC One M8. Like the Samsung Galaxy Note 4, the Nexus 6 sports a metal frame which helps improve the style factor of the device. Its rear cover, which is not removable, is made of polycarbonate. There are two color finishes - cloud white and midnight blue - and truth be told, we prefer the darker color finish as stains and dirt do not show up as easily.

Besides the massive AMOLED display, the front of the Nexus 6 is relatively clean with a pair of stereo speakers (placed at the top and bottom of the screen). There is no hardware navigation button or a fingerprint sensor. You will find the 3.5mm audio output jack on the top of the Nexus 6 with the nano-SIM card slot beside it, while the power button and volume rocker are located near the middle of the phone's right profile. 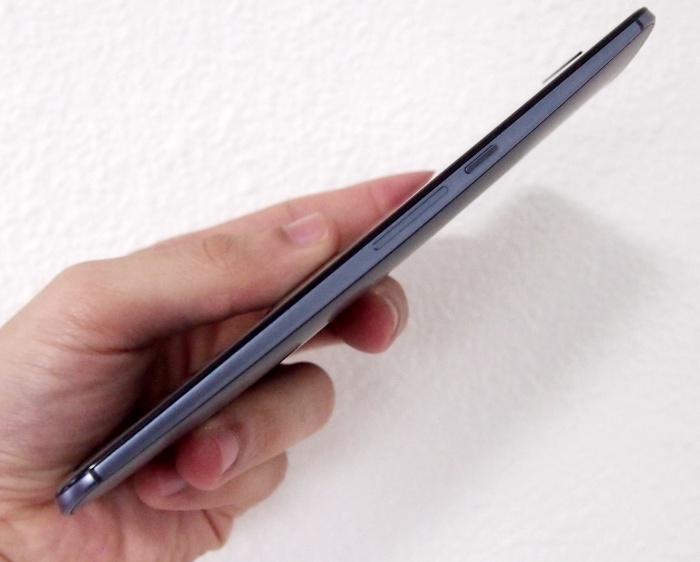 The absence of a memory card slot may be a sore point for power users, and it doesn't help that the Nexus 6 sold in Singapore only comes with 32GB internal storage. The available storage space out of the box is actually only 23.65GB after installing the latest Android 5.1 update and updating the preloaded apps. 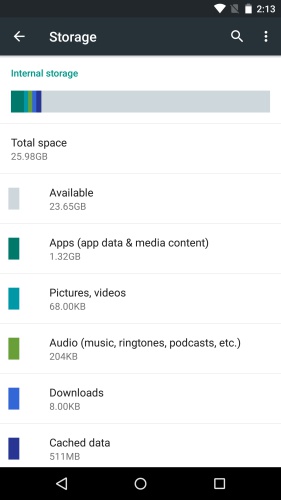 The Nexus 6 packs a huge 5.96-inch AMOLED display with Quad-HD resolution of 2,560 x 1,440 pixels. This firmly places it in the league of the Galaxy Note 4, Note Edge, HTC One M9+, One E9+ and the LG G3. Its choice of AMOLED is deliberate for maximum power efficiency when using one of the most important features in Android 5.0 Lollipop, Ambient Display.

Ambient Display, Google's own take on Motorola's Active Display on the Moto X, will light up certain pixels on the display to show notifications. Due to the technical nature of AMOLED panels, black pixels are just off and all it needs is a small portion of the screen to light up for showing notifications. The immediate benefit is better power efficiency, which we will discuss further in the battery test section. Also as a result of using an AMOLED display, you can also expect to see very deep blacks, superb contrast and eye-popping colors on the Nexus 6.

Nexus devices have always been the flag bearers for the latest Android OS and the Nexus 6 is no exception; it was announced last October alongside Android 5.0 Lollipop (developer preview was announced in June at Google I/O) which is the biggest update since Android 4.0 Ice Cream Sandwich. Core to Android 5.0 is the new look known as Material Design, which in our opinion, is the best looking interface design yet from Google. Android 5.1 was recently released and we updated our Nexus 6 review unit. Here are some notable features you can find on devices running Android 5.0 and above: 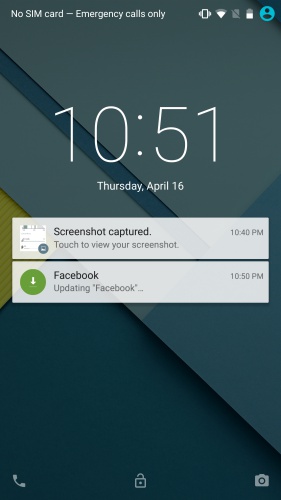 Notifications can now be swiped away and you can directly access the app for the notifications by double tapping. There is also a new dialer shortcut at the bottom left corner of the lock screen, which opens up the dialer app when you swipe right. 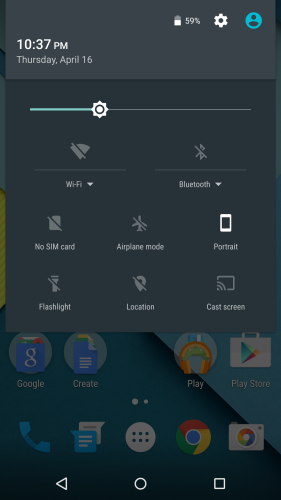 You also can access the flashlight, mobile hotspot, screen rotation lock and cast screen functions right from the Quick Settings panel. The battery icon now has the percentage displayed right beside it. 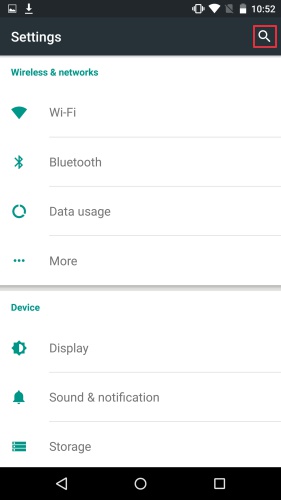 If you notice, there is a magnifying glass on the top right corner of the Settings page. This is the universal search engine for Settings, which will come in handy for consumers who aren't aware of where to find a particular option instead of wasting time hopping through all menu options and possibilities. 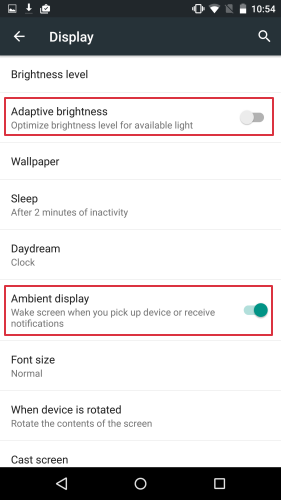 As mentioned earlier in this review, Ambient Display works best with AMOLED displays and that's the reason why this feature may not be supported on all Android 5.0-powered devices. It basically turns on the screen and displays the notifications when they arrive.

It's a long overdue feature for stock Android - a power management tool to extend the battery life of your device during emergencies. Known as Battery Saver, Google claims that it will extend battery life by up to 90 minutes by reducing the performance, disabling vibration, ambient display, location services and most background data. It can be accessed manually via Battery > Settings > Battery Saver. Alternatively, Battery Saver can be enabled automatically when the battery hits 5% or 15%.

Besides Battery Saver, you now have more detailed insights into battery life standings. The graph shows you the estimated time of how much longer the battery can last. Likewise, it will show you the time required for the battery to be fully charged when you plug the Nexus 6 to a charger.

Since we are on the topic of battery charging, the Nexus 6 supports Qualcomm Quick Charge 2.0. Google states that you are able to get up to 6 hours of use from just 15 minutes of charging. This is made possible by the bundled Motorola Turbo Charger which provides 1.6A charging rate.

In any case, Qualcomm recently published a video where it compared the charging time of three Nexus 6 devices using three different chargers. Check out the video below: 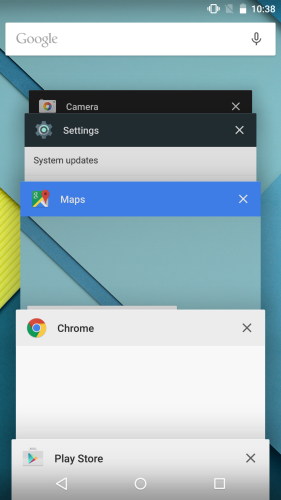 Multitasking is also enhanced on Android 5.0 Lollipop. Instead of the previous list view, you now see background apps as a stack of cards which you can close easily via the "x" button on the top right corner of each card or by simply swiping away.

This is clearly inspired from browsing tabs on the Chrome app on Android devices. Having said that, different tabs opened in Chrome will also show up as different cards in the multitasking panel. It's a pity that Google didn't take this chance to implement an option to quit all background apps at once. You have to manually swipe them all off the screen.

What's missing from Android 5.0 Lollipop is the optimization of the interface for large screen devices like the Nexus 6. If you haven't noticed, there are no features that make full use of the phone's huge screen area. We are referring to the split-screen multitasking features and the one-handed operation modes found on other Android phablets. Considering that Google's core apps such as Gmail are not optimized for large screens, it's hard to imagine if developers would have any incentive to do so for their apps on phablets.

Write a Review
Compare This | Specifications
Great overall performance
Good imaging capabilities
Splendid display
Heavy and a little too wide
Lack software features to make use of big display
No memory card slot
Our articles may contain affiliate links. If you buy through these links, we may earn a small commission.
Sponsored Links