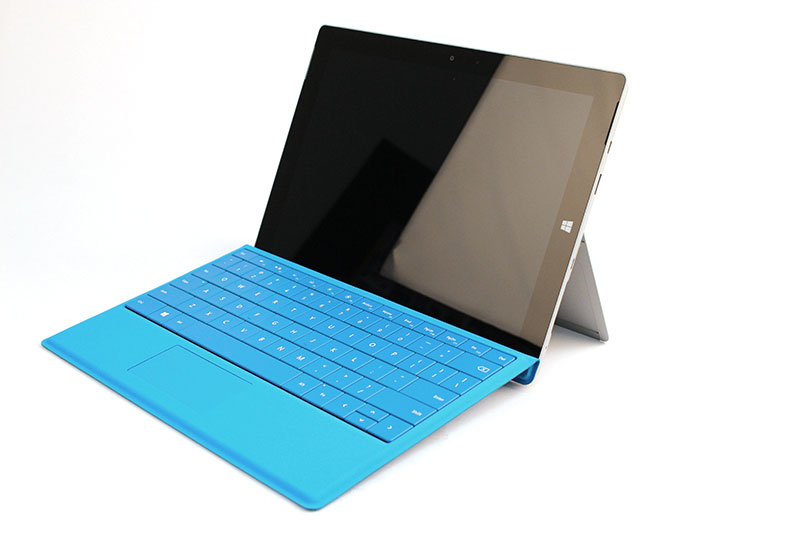 A new Surface for a different audience

The Microsoft Surface line of 2-in-1 devices has had a checkered history. But since 2012’s fragmented offering consisting of the Surface RT and Surface Pro, Microsoft’s Surface tablets-cum-notebooks have gone through a series of iterative improvements that, slowly but surely, have pushed the devices to the forefront as serious notebook alternatives.

Indeed, Microsoft finally hit on a winning formula with last year’s Surface Pro 3. Its crisp 2,160 x 1,440-pixel display finally ditched its predecessors’ 16:9 aspect ratio in favor of a 3:2 aspect ratio that worked better for productivity tasks. Given that the 12-inch Surface Pro 3 was targeted at business and creative professionals, the new 3:2 aspect ratio provided valuable vertical screen real estate to work with. Case in point: a so-called ‘taller’ display’ would allow you to view more text in a document at any one time, whereas a ‘wider’ one would simply stretch it across the screen.

And at just 799g in weight and a svelte 9.1mm thick, the Surface Pro 3 (capable of being equipped with up to a fourth-generation Intel Core i7 processor) appeared to have found the sweet spot in terms of ease of handling, portability and performance.

Building off the same formula

While industry watchers were expecting the latest Surface slate out of Microsoft to be an upgrade to the immensely popular Surface Pro 3, we instead got the Surface 3, a sized-down version of the larger slate. But that’s not to say that we are disappointed. The Surface Pro 3 was not cheap – the lowest-specced Core i3 model cost S$1,108 and the highest would set you back by a whooping S$2,698 – so we’re glad to hear that Microsoft has decided to package the quality and winning design of the Surface Pro 3 into a smaller, more affordable package for less demanding users.

As we noted in our hands-on preview of the device, the Surface 3 looks quite literally like the smaller sibling of the larger Surface Pro 3. They feature the same silver-gray magnesium alloy construction and the same impeccable build quality. Even though it’s supposed to be somewhat less premium than the Surface Pro 3, the new Surface is still solidly built and all the parts are welded together seamlessly. 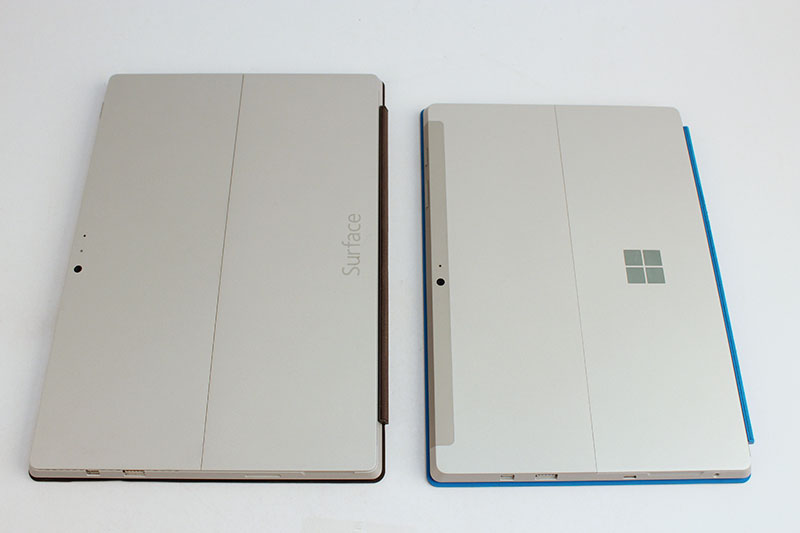 It even works with the same N-trig active pen that we saw with the Surface Pro 3, with the same functionality that we loved. Unfortunately, this is also one area where Microsoft has cut back for the new device – the pen is not bundled with it and will have to be purchased separately for S$73. This is probably why the Surface 3 does not prompt you to pair with the Surface Pen during setup. Instead, you’ll need to enter the Bluetooth settings menu to manually pair the pen. 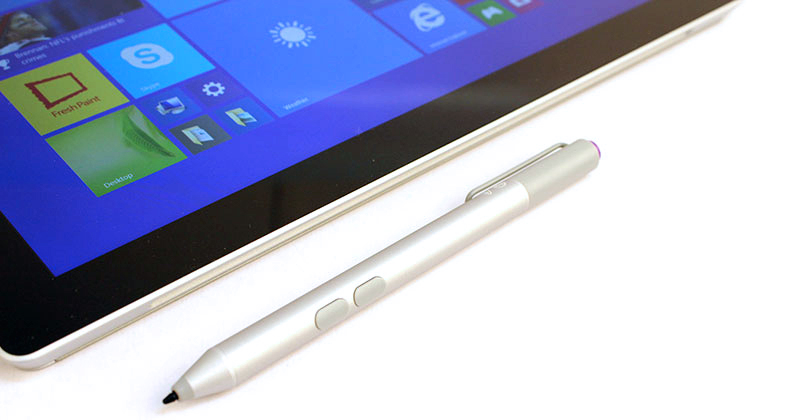 That aside, the pen functions pretty much the same as did on the Surface Pro 3. Clicking the top button brings up OneNote for quick note-taking, and the palm block technology functions as admirably as ever.

The Bluetooth pairing is handled by the onboard Marvell Avastar 88W8897 chip that also integrates support for the 802.11ac wireless standard (2x2 MIMO spatial stream multiplexing with data rates up to 866.7 Mbps) and NFC. 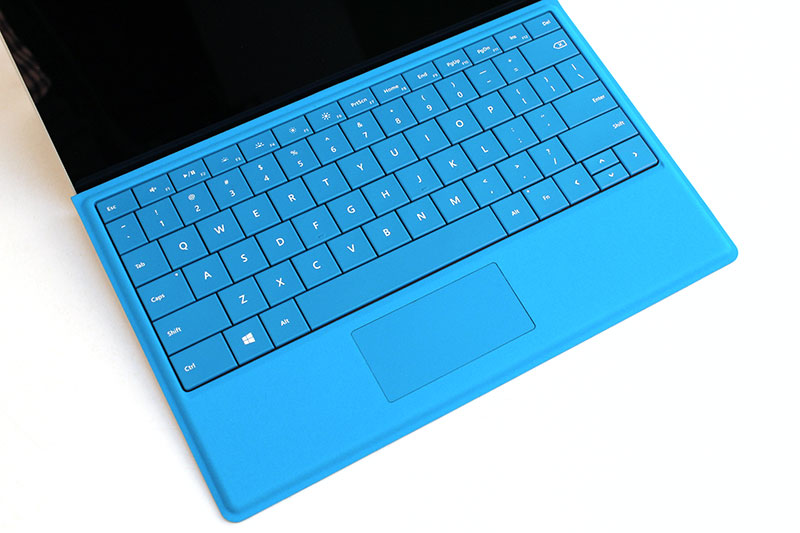 The Type Cover keyboard is also where Microsoft’s attention to detail is the most apparent. While the Surface Pro 3’s Type Cover keyboard acquitted itself quite well, one minor niggle we had with it was its shallow key travel and slightly mushy feel. In this area, the Type Cover for the Surface 3 is not merely a smaller version of last year’s Type Cover and instead boasts farther key travel distance that makes for a better and more tactile typing experience. The new Type Cover keyboard represents quite a significant improvement in typing, all while maintaining a slim 4.9mm-thick profile. It’s also available in two new and more vibrant colors – bright blue and red.

Connectivity-options wise, the Surface 3 still offers only one USB 3.0 port and a single mini-DisplayPort output on its right edge. We’d have liked to see more USB 3.0 ports, but given that this is supposed to be the more affordable model, we’re not complaining. Microsoft has also swapped out the reversible charging port on the Surface Pro 3 for a more conventional micro-USB port. The reversible, magnetic charging plug for the larger slate was a nice touch, but micro-USB compatibility adds to the broader, mass-market appeal of the Surface 3 – if you lose the charger, you no longer have to shell out S$108 to replace it. 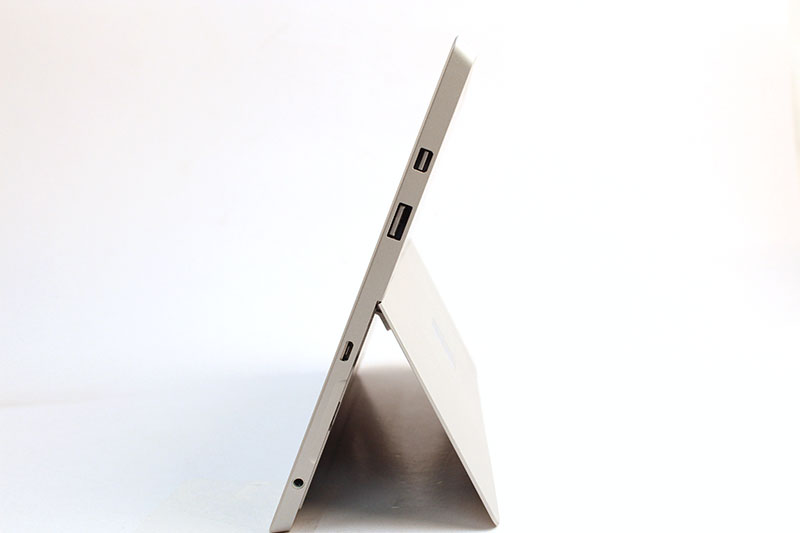 In addition, Microsoft has made some placement changes to the headphone jack and volume controls. The headphones jack has been moved to the bottom of the Surface 3’s right edge, while the volume rocker is now positioned at the top, next to the power button. We like the new placement of the headphone jack as it’s now more convenient to plug in headphones while using the Surface 3 with its Type Cover keyboard. The headphone cord can now trail discreetly from its bottom edge, instead of dangling from the top as with the Surface Pro 3. With regards to the volume rocker, we found it equally easy to use on both tablets, so it really comes down to a matter of personal preference. 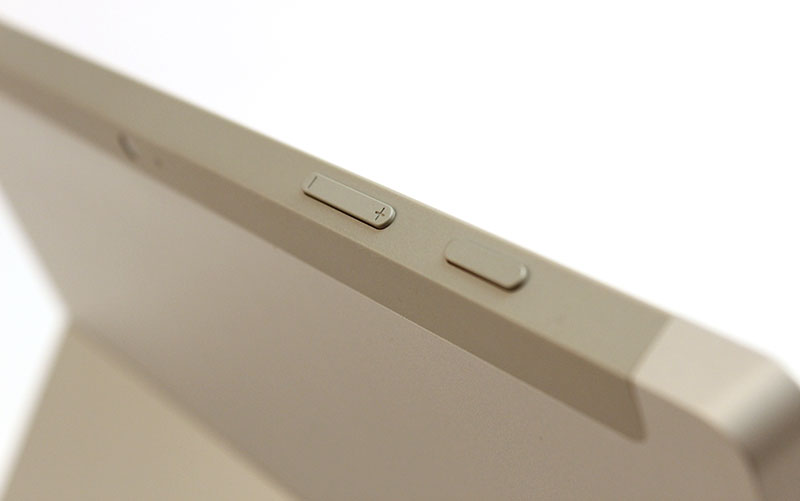 Furthermore, should you be in need of more storage, the Surface 3 takes a leaf from the Surface Pro 3’s book with a microSD card slot hidden under its kickstand.

Finally, Microsoft has also released a dedicated docking station that's compacted to suit the Surface 3 and to help it circumvent its limited port options. At S$288, it's not exactly cheap, but you get a far more complete array of ports that will enable you to plug in a mouse, optical drive and external hard drive all at the same time. You also gain access to the internet via a Gigabit Ethernet port, in case Wi-Fi isn't available. Sadly, even the new dock isn't collapsable in design and the upright nature of the dock still occupies notable space that doesn't bode well for a travelling professional who is tight on luggage space. 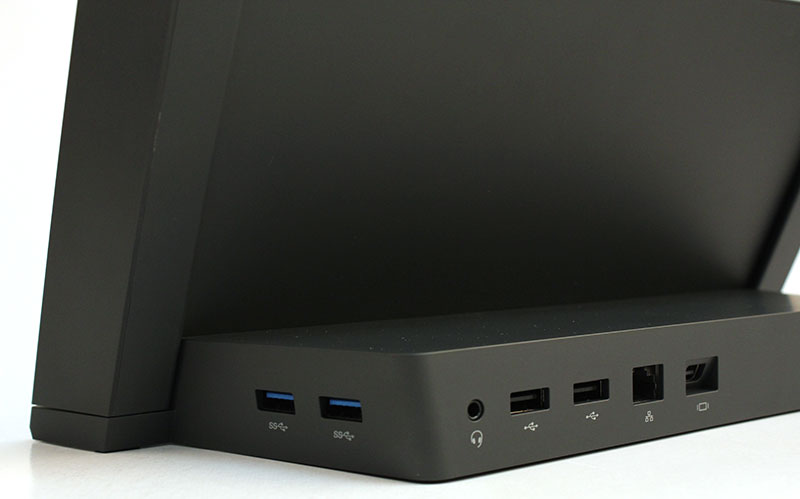 Pared down to the essentials

The Surface 3 sports a 10.8-inch display with a slightly uncommon resolution of 1,920 x 1,280 pixels, which makes for the same 3:2 aspect ratio as on the Surface Pro 3. The smaller display on the Surface 3 also means that pixel density and the general sharpness of the display does not take much of a hit when compared to its bigger sibling. In fact, with a pixel density of 214ppi, the Surface 3 is more or less on par with the Surface Pro 3’s 216ppi. When using both devices, we also felt that there wasn’t much of a difference between the displays, so that’s one concern put to rest right there. 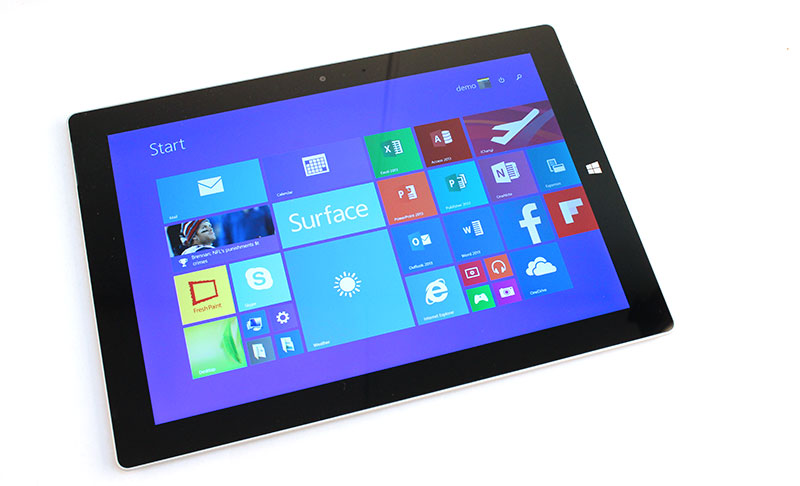 And while last year’s multi-position, friction hinge kickstand may have wowed us with how well it worked, the Surface 3’s kickstand is capable of only three positions. This may seem like a step down, but the new kickstand proves to be as solidly constructed as its predecessor. It notches into each of the three positions with reassuring feedback and is in no danger of accidentally being pushed into the next position. The versatility of the Surface Pro 3’s kickstand was a much-valued feature, but the Surface 3’s kickstand works so well that the much-lauded multi-position hinge may just prove to be a luxury instead of a necessity. 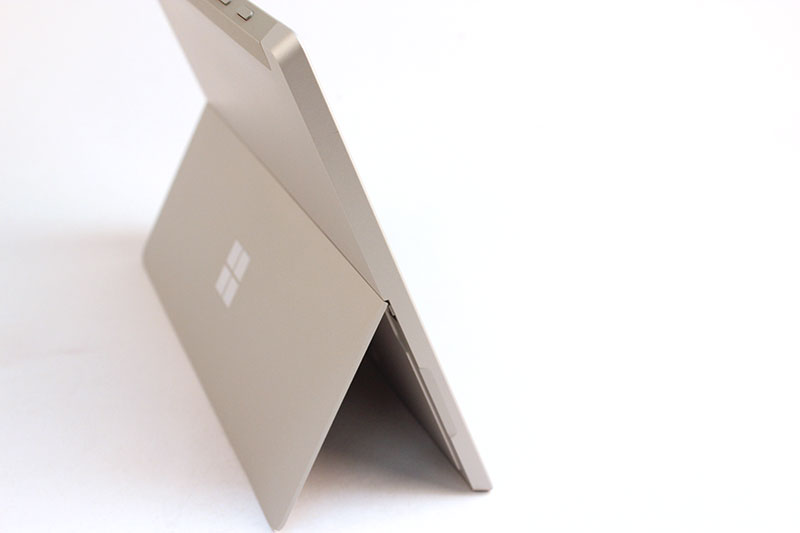 In addition, the rear camera has received an upgrade over the 5MP fixed focus camera on the Surface Pro 3. The new Surface is now outfitted with an 8MP camera that is capable of auto focus. But while Microsoft has bumped up the capabilities of the rear camera, it has instead opted to cut back on the front camera, implementing a 3.5MP fixed focus camera over the 5MP one on the Surface Pro 3. This decision reflects Microsoft's design philosophy with the Surface 3 - by beefing up the rear camera, which arguably matters more, and cutting costs on the front camera, it is focusing its resources on the areas that count in order to deliver a more cost-effective product. 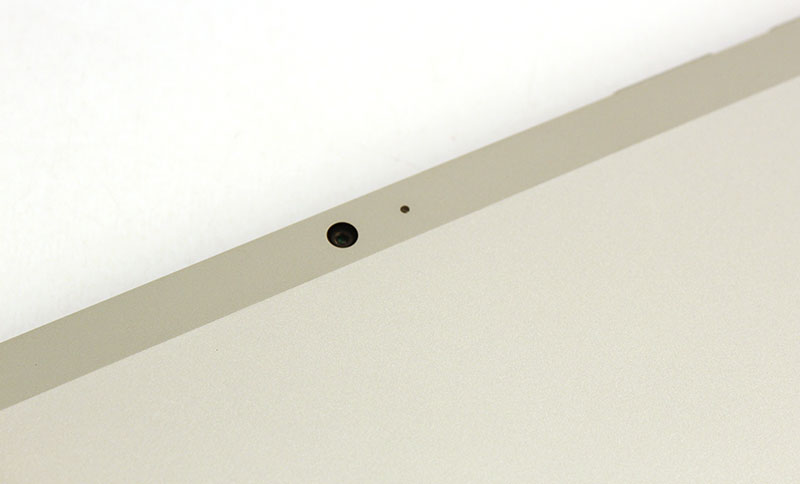 Storage is also another area where Microsoft has cut back on. The Surface 3 utilizes eMMC flash memory, which is the same type of memory used on the iPhone 6. As an embedded multimedia card, eMMC flash lacks the firmware or other dedicated hardware and interfaces that allow SSDs - like the mSATA SSD on the Surface Pro 3 - to perform so well. With the Surface 3, Microsoft thus appears to be gravitating away from notebook replacement and toward the tablet end of the spectrum.

The most significant change comes under the hood, where the new 64-bit, quad-core Intel Atom x7-Z8700 processor hums along. This makes the Surface 3 the first device available to consumers to use Intel’s new 14nm Cherry Trail platform. The Atom x7-Z8700 is the highest-end chip in Intel’s latest Atom line-up, with a base clock of 1.6GHz and Intel Burst technology that can ramp it up to 2.4GHz (the equivalent of Turbo Boost on desktop processors). It also has 2MB L3 cache and a rated SDP (Scenario Design Power) of just 2W.

In the graphics processing department, it relies on onboard Intel HD Graphics which has just 16 execution units and runs at a GPU base frequency of 200MHz and burst frequency of up to 600MHz. Despite Cherry Trail's focus on improved graphics performance, this still isn't capable of any serious gaming performance, as we'll see in our benchmarks later.

Another notable change would be the absence of a fan on the Surface 3. While the Surface Pro 3 had vents along its edges for exhaust, but the Surface 3 dispenses with the need for any thanks to the Intel Atom chip on board. This brings it in line with other Intel Core M Ultrabooks and 2-in-1 hybrids on the market today, which also lack a dedicated fan for active cooling. 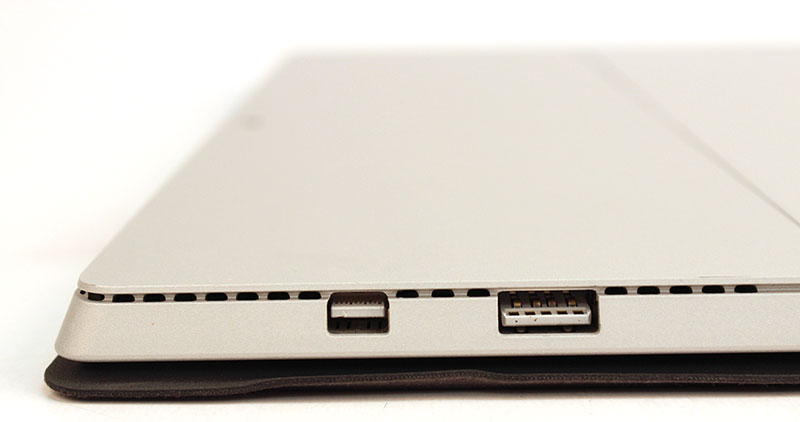 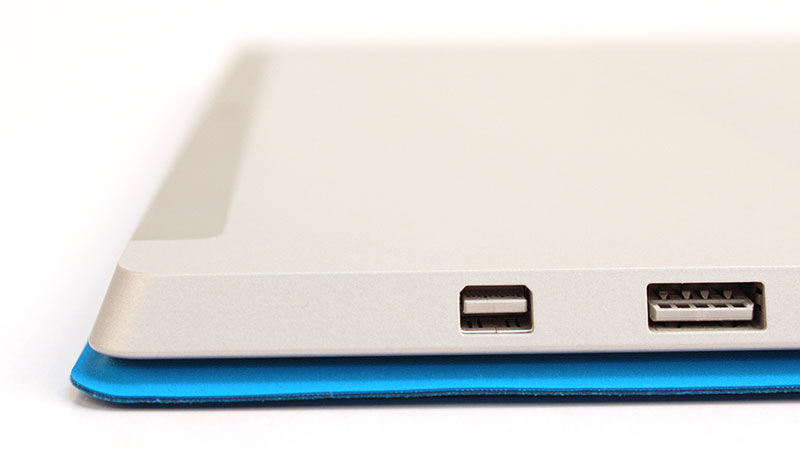 But unlike the Surface Pro 3 which was available in five different configurations, Microsoft’s new Surface has simplified things with just two configurations to choose from. The cheaper configuration offers 64GB of storage and 2GB of RAM, while the more pricey option doubles that to 128GB of storage and 4GB of RAM. At just S$748 and S$898 respectively, the Surface 3 is much easier on the wallet than its more powerful sibling. After factoring in the cost of the S$199 Type Cover keyboard and S$73 pen, you might see the price go up to S$1,170 for the 4GB model plus both accessories. That’s only slightly more expensive than the cheapest Surface Pro 3 configuration (without the Type Cover keyboard), but whether that's good value or not directly depends on your priorities and needs at this price point.

Thanks to Cherry Trail’s support for x86 Windows, the Surface 3 will still run Windows 8.1. Microsoft may have cut back on the hybrid device’s specifications, but it has retained full functionality in the areas that really matter. And after the abysmal reception of the Windows RT-powered Surfaces, Windows 8.1 is clearly the only option. This means that the Surface 3 is also primed for a free upgrade to Windows 10, which is slated for release later this year.