Apple's Back to School promo is back with discounts on Macs and iPads, free AirPods, and more
Product Listing
AcerAppleASUSBlackBerryHPHTCHuaweiLenovoLGMicrosoftMotorolaPanasonicProlinkSamsungSonyToshibaViewsonicXiaomi

Just under a year ago, Microsoft released the Surface RT tablet. It received a somewhat mixed reaction. On the one hand, the tablet itself sported a great design, with good handling and performance, and one of the best keyboard peripherals we've seen for a tablet. On the other hand, it was quite hefty, and we weren't completely sold on Microsoft's Windows RT OS. Today, Microsoft is launching the Surface RT's successor, the Surface 2 - the RT branding is being dropped, but the device will still be running on Windows RT. While the Surface 2 has been retailing in USA since September 2013, Microsoft has finally been able to build up enough inventory to formally introduce it in our region as well. 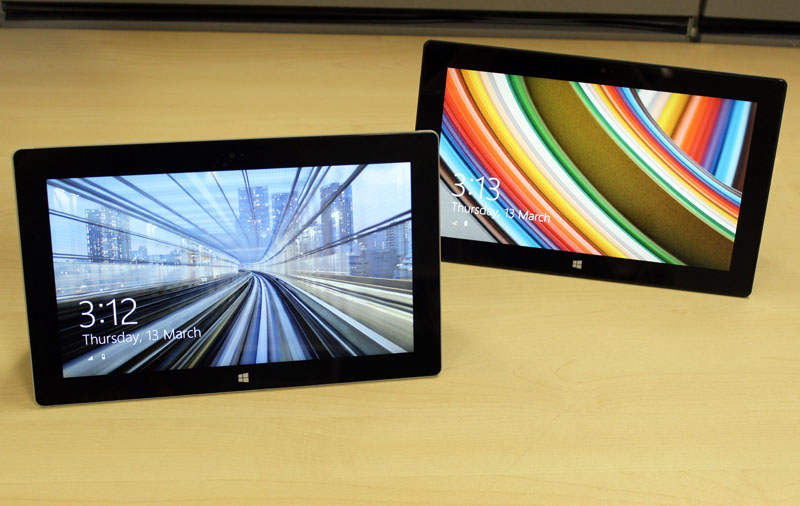 The Surface 2 is powered by an NVIDIA Tegra 4 processor, and now sports a 10.6-inch ClearType Full HD (1920 x 1080 pixels) resolution touchscreen display. The USB port has been upgraded to USB 3.0, and both cameras have been upgraded, with a 3.5-megapixel camera on the front and a 5-megapixel camera on the rear. Even with all of these enhancements, the Surface 2 actually manages to be slightly thinner and lighter than its predecessor.

As with the Surface RT, two storage configurations are available. The 32GB variant costs S$618 while the 64GB model can be had for S$748.

Every Surface 2 will come with a full version of Office RT pre-installed, and you'll also get 200GB of OneDrive (previously called SkyDrive) storage for two years as well as one year of free-calling to land lines in more than 60 countries on Skype. So do bear these extra frills in mind as you weigh the vale of the Microsoft Surface 2 tablet as a whole.

Before we start, let's take a closer look at the Surface 2's full specs, as well as how it compares to the original Surface RT tablet:

The overall design of the Surface 2 remains essentially unchanged. The front of the tablet sports the same fairly wide black bezel with its capacitive Windows button, while the sides retain the tapered edges and rounded corners. 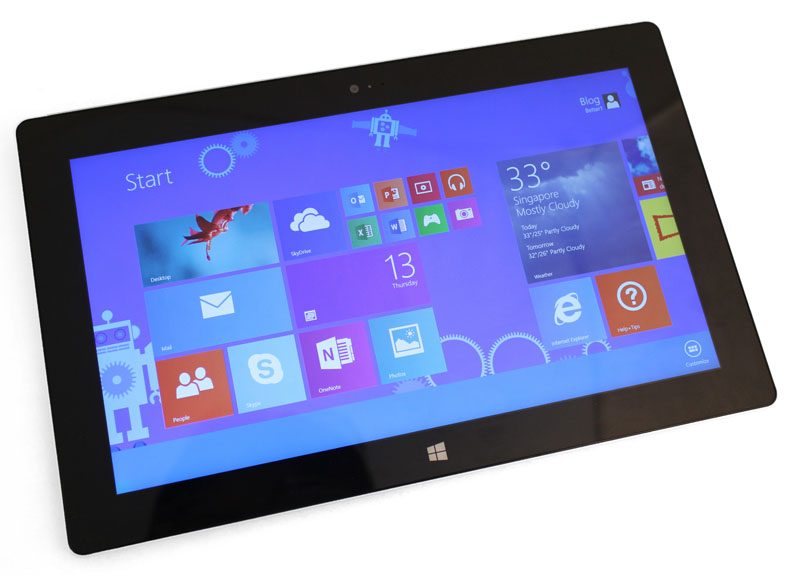 The back of the device does look quite different, thanks to a new matte industrial silver-gray finish that looks and feels a bit like unfinished aluminum - or VaporMg in this case, the custom-made magnesium alloy Microsoft uses for every Surface tablet. The look is quite attractive; it's stylish and eye-catching yet unassuming, and it's only slightly spoiled by a darker gray plastic strip that runs across the top of the device containing its wireless antenna. As a nice bonus, the silver-gray metal is completely fingerprint resistant (unlike the smudge prone black finish on the Surface RT) and also hides scratches very well. 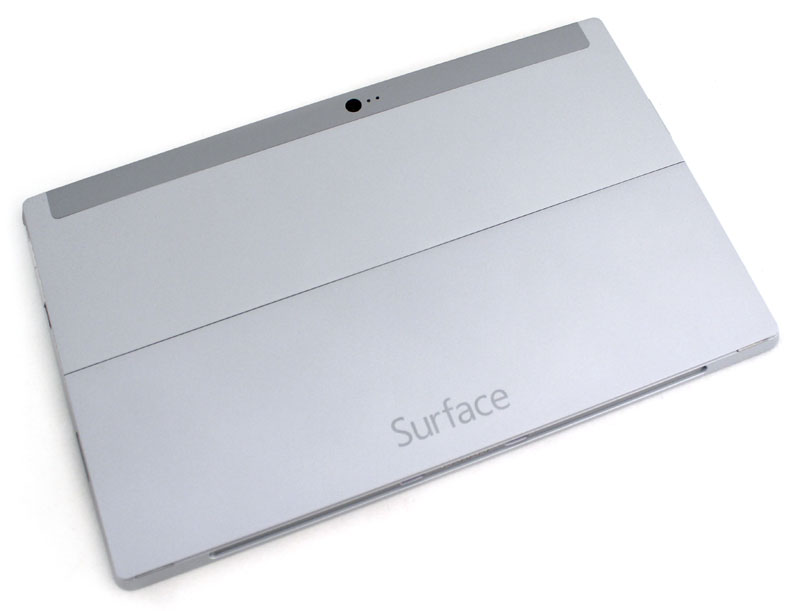 The Surface 2 is 0.5mm thinner than its predecessor at 8.9mm compared to 9.4mm on the Surface RT. Comparing the edges of each, you can see that Microsoft has removed the thin lip that ran around the edge of the screen before it started to taper, and the sides now taper straight away. While the slight reduction in thickness isn't really noticeable in hand, it's a cleaner, more refined look.

Similarly, the Surface 2 now weighs 4g less than the Surface RT, and again, the reduction isn't really noticeable, but it's light enough that you can just about carry it around all day, and it feels well balanced and comfortable to hold in hand. Still, it's worth mentioning that, compared to other tablets of similar size, it doesn't fare all that well. At 676g it's only a bit heavier than Apple's 2012 iPad 4 (which has a smaller 9.7-inch screen), but it's an absolute boat anchor compared to the newer 469g iPad Air or Sony's 10.1-inch 495g Xperia Z Tablet.

Like the Surface RT, the Surface 2 has a built in kickstand which folds out and lets you stand it up on your table. It's only really suitable for landscape orientation as the screen doesn't angle back in portrait mode leaving it balanced a bit precariously - not that that really matters, since the Surface 2's 16:9 aspect ratio looks comically tall in portrait mode anyway. 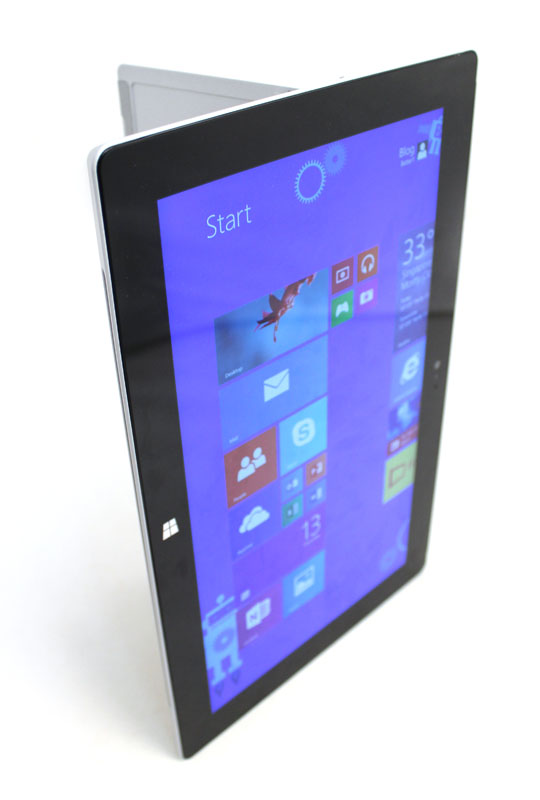 The kickstand has also been improved, and can now be used at two angles. The original 22-degree was far too upright - you couldn't use it unless you slouched really far down - but pull the kickstand out a bit further and it will pop into a lower 55-degree angle that provides the perfect viewing angle for use on your lap or desk. As an added bonus, the lower position also feels a bit sturdier thanks to the wider base. 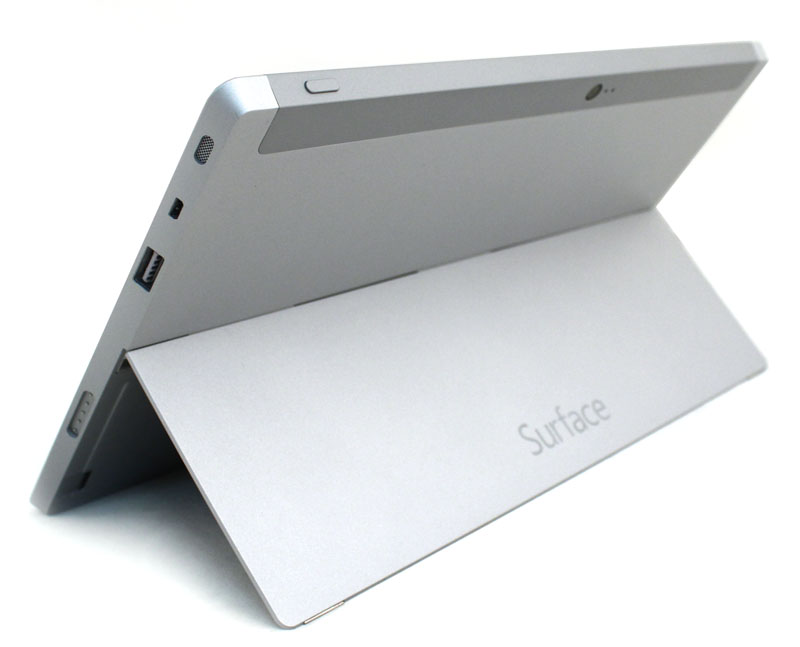 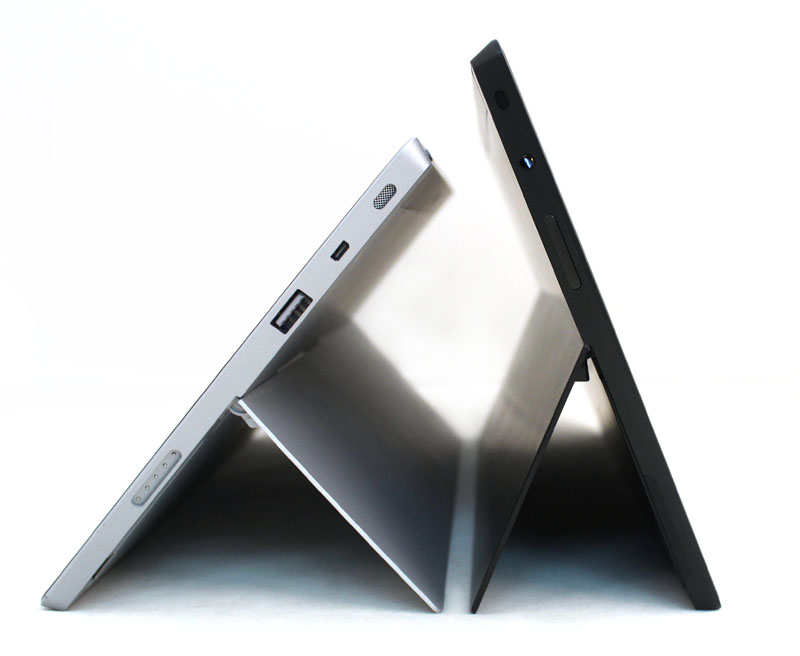 As with the original Surface, the power button can be found on the top right corner - or bottom right in portrait mode - with the volume rocker on the left side under the headphone jack. Port layout remains almost identical to the Surface RT, with the USB 3.0 port and Mini-HDMI port on the right edge, and the MicroSD card reader found under the kickstand (helpfully, the silver-gray finish makes it easier to spot than it was on the black). 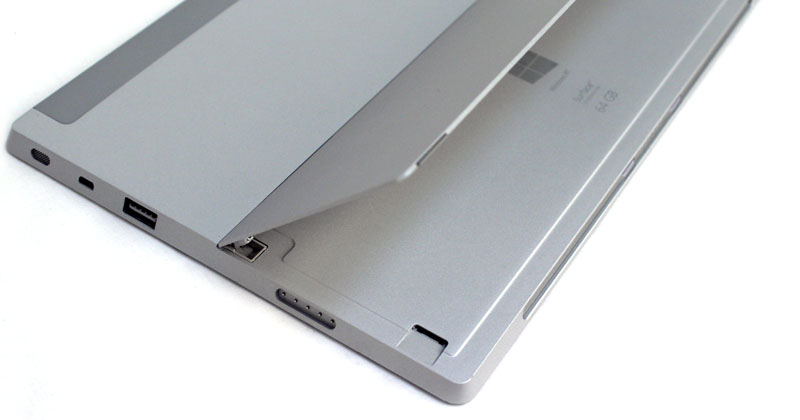 One nice improvement is that the magnetic power connector now fits more securely and is less prone to being knocked out. The strip of light around the connector is also more obvious than the lighted dot on top of the old connector, making it easier to know that the connector is plugged in and charging correctly. 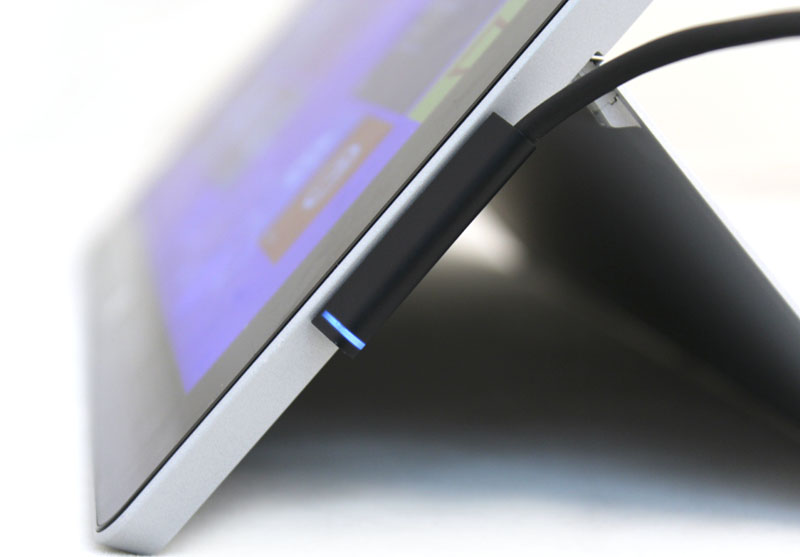 The highlight of the Surface 2's upgrades is its new Full HD, 1920 x 1080 pixels resolution display, which gives it a ppi density of 208, and puts it on par with the Surface Pro and Surface 2 Pro. It's brighter, crisper and more vivid than the original Surface RT screen, and boasts great contrast with deep blacks and superb viewing angles. 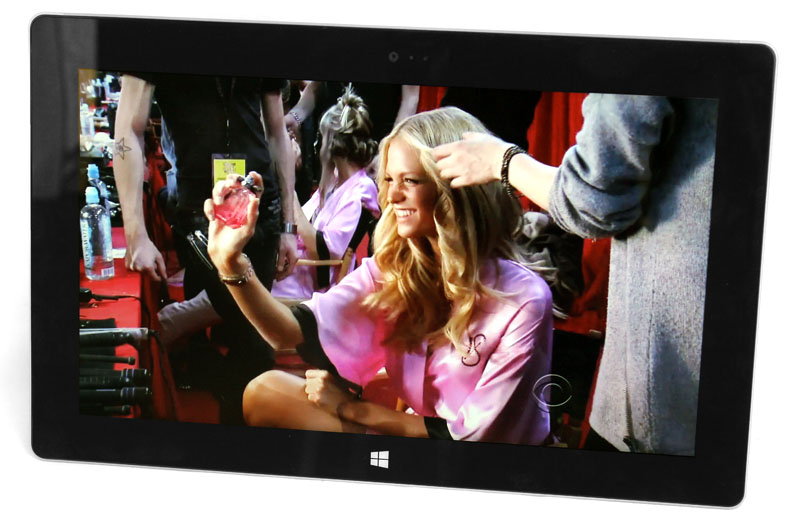 Compared to other tablets like the iPad Air, clarity isn't quite as good, especially if you're the type to scrutinize pixels, but it should be sufficient for most users. Honestly, you probably don't want a higher resolution display anyway as, unlike Windows 8.1 apps, Windows RT's desktop mode doesn't scale with resolution and everything already looks a bit small at Full HD. 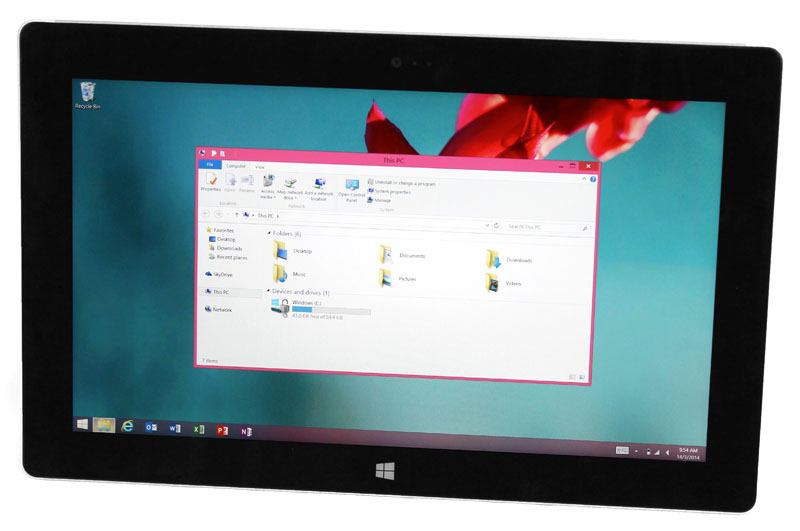 The Surface 2's 16:9 aspect ratio is great for movies and is complemented by surprisingly powerful twin stereo speakers. The speakers are slightly larger than the ones found on the Surface RT and crank out an impressive amount of sound, especially considering how thin the Surface 2 is. Volume is ample, treble is clear and details are crisp, although, as expected for a device this size, bass is a bit lacking. Still, it's more than sufficient for personal movie watching, and while we normally advise a good pair of headphones to partner your tablet, you could probably go without for the Surface 2 - unless you're in a public space of course. 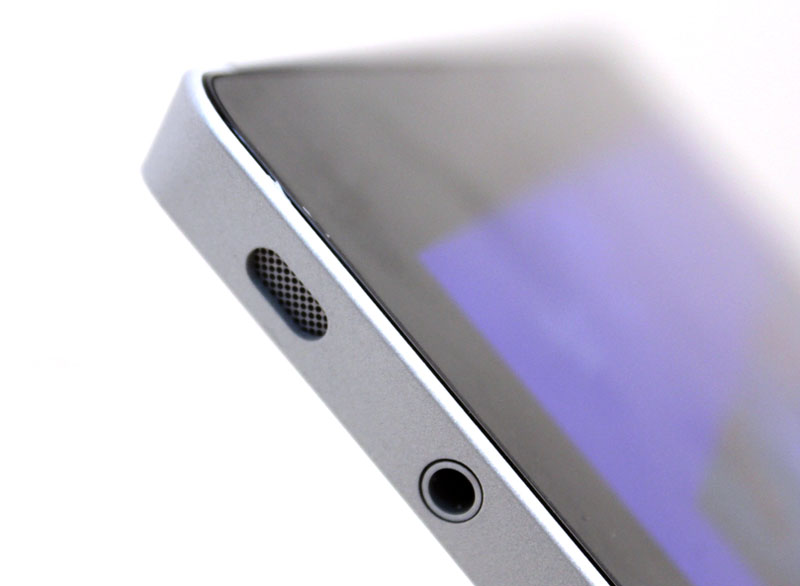 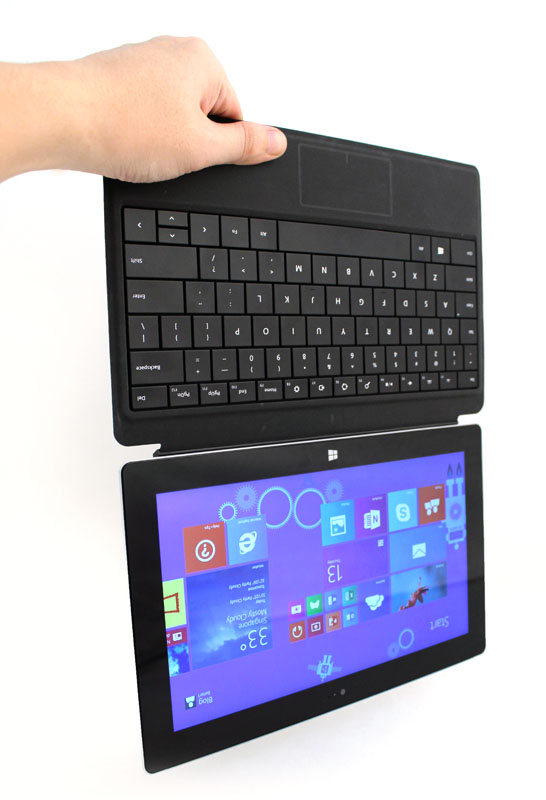 The new Type Cover 2 is lighter, thinner, and is now armed with backlit keys. To save power, the backlight dims and then turns off when you stop typing for a few seconds, but comes back as soon as you touch a key again. The keys have a surprisingly generous amount of travel for such a thin keyboard, and there's noticeably less flex than on the original Type Cover, which makes typing a lot more comfortable. The keys are also quieter on the Type Cover 2, so you're less likely to annoy people around you. One change we didn't like was the removal of the physical click from the trackpad, which is now integrated into the wrist rest and offers no tactile feedback. 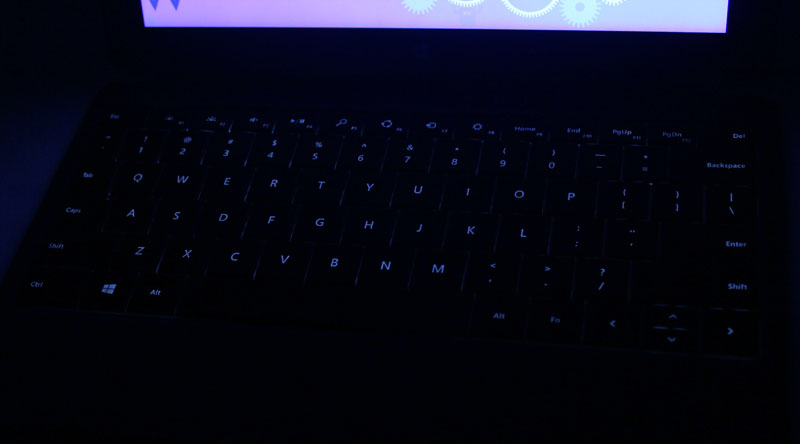 The Touch Cover 2 has also been upgraded with backlit keys and is noticeably more sensitive than the previous model with more touch sensors, requiring just the lightest of touches to activate a key. Even so, it's still not as accurate or comfortable as typing with actual keys and it's not actually that much lighter or thinner than the Type Cover 2, which makes us question its benefit. 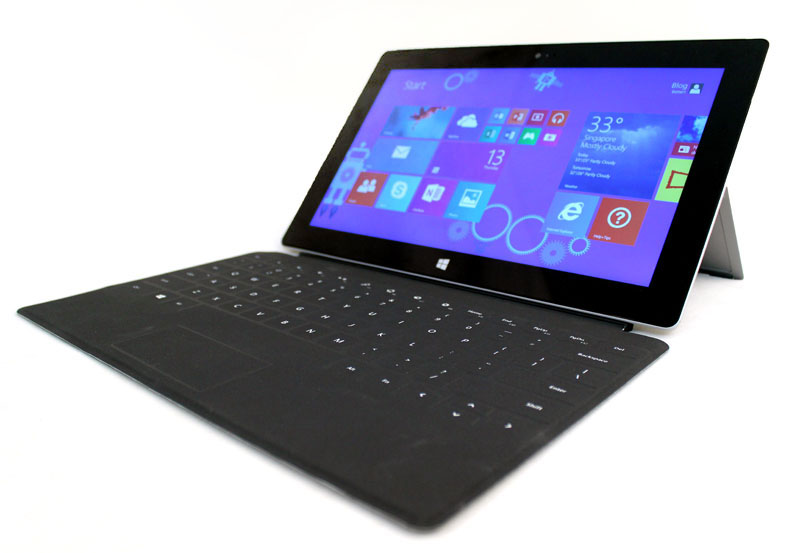 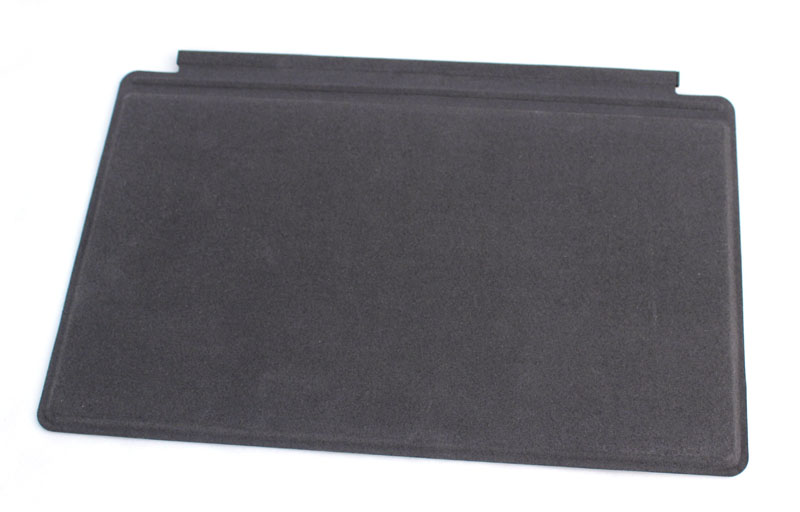 The Touch Cover 2 will be available in Charcoal for S$168, while the Type Cover 2 is offered in Charcoal, Purple, Cyan and Magenta for S$183.

Like Surface RT, Surface 2 runs on Windows RT OS, now upgraded to version 8.1. Of course, everyone's big complaint with Windows RT is its complete inability to install any desktop programs(or also otherwise known as conventional applications). Microsoft has tried to fill some gaps by pre-installing Office RT on the Surface 2, which now includes Word, Excel, Powerpoint, OneNote and Outlook, providing most of the productivity functionality you'll ever need, but that's still only one piece of the puzzle. The main problem is that we've all become familiar with how we like our Windows desktop and the certain set of programs we all install when setting up a new PC - as such, going from a home PC with a full Windows OS, to Windows RT, can be quite a jarring experience. Even if you know that you'll never install Photoshop or Crysis 3 on your Surface 2, it would be nice to be able to choose your preferred web browser, but RT won't let you install Chrome or Firefox, so you're stuck with IE. It's not bad, but the crux of the issue is the lack of options.

The problem wouldn't be quite as bad if the Windows Store had apps that could fill the gap left by the lack of desktop programs, but unfortunately, the level of big name Windows Store apps is still way below that of iOS and Android and, other than a brief burst at the end of last year, growth of the Windows Store seems to have really slowed down. After all, Windows Store only got its official Facebook app in October last year, a full year after Windows RT's launch, and there are still some other glaring omissions like an official YouTube app. 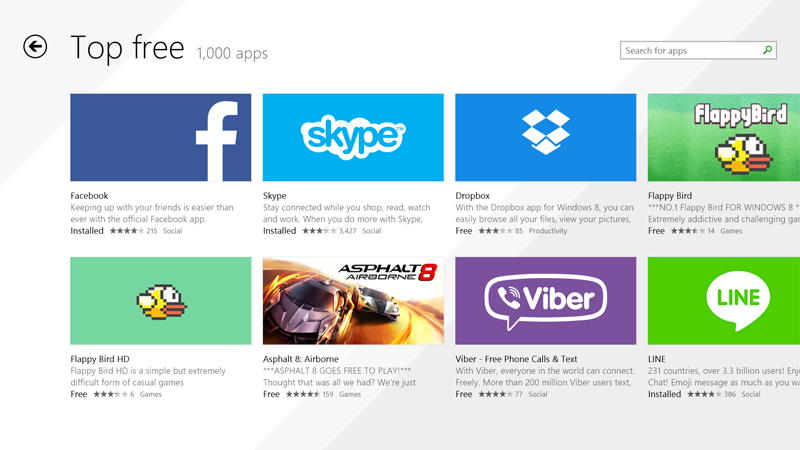 Like the Windows 8.1 update, Windows RT 8.1 includes a few changes. The Start screen now has more tile sizes, so you can choose between tiny shortcuts for apps, and huge tiles showing news feeds or messages. The desktop also has the Start button on the taskbar, which takes you back to the Start screen. If you want to, you can also choose to boot the Surface 2 straight to the desktop, just like in Windows 8, although obviously, there's less reason to do that on Windows RT. 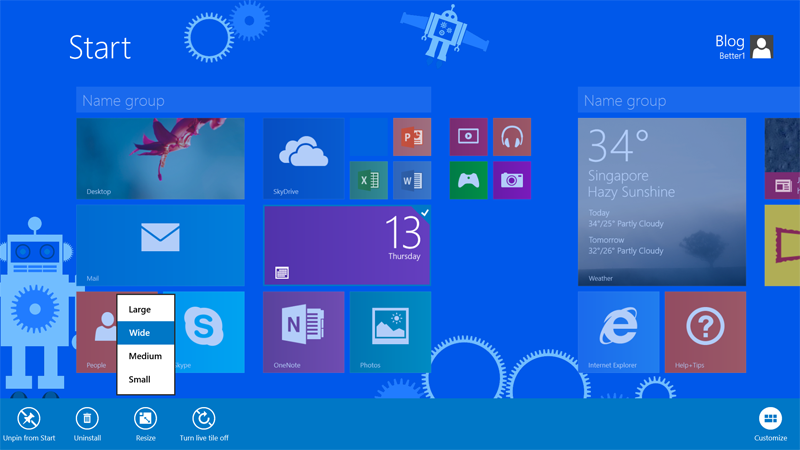 Windows 8.1 RT also includes more options for multiple windows. On the original Surface you could only view two apps side by side - now you can divide the screen into thirds or even quarters to fit what you're looking at. You can also resize each window to give more space to important ones. 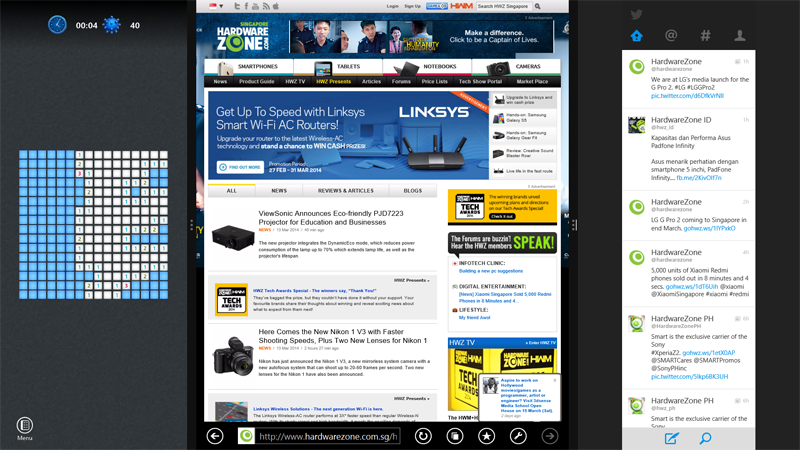