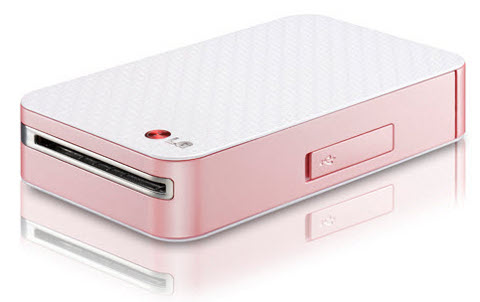 Smartphone photography is catching on in a big way, with Sony releasing the Cyber-shot DCS-QX10 and QX100, which are dedicated lens-style cameras for your smartphone, while Samsung has had a smartphone with a built-in projector for quick large screen sharing. But what’s been missing though is the ability to print your pictures easily and quickly when you’re on the go. While many recent printers offer Wi-Fi capability and the ability to print using Apple AirPrint and Google Cloud Print, we’re still talking about large desk-bound printers.

And that’s where the LG Pocket Photo PD233 comes into the picture. A portable wireless printer, the Pocket Photo’s small enough to slip into a bag, though it’s a much tighter fit in pockets due to its thickness. It’s slightly larger than the original iPod, but is twice as thick. If you look close enough, you will realize that the Pocket Photo’s surface is patterned with small hearts, though it’s pretty hard to tell from a distance. 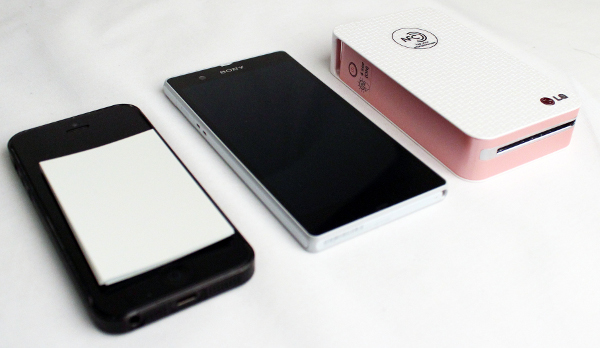 The printer runs on an internal battery, and its spec sheet indicates a battery life of 20 prints before running out of juice, though that number may drop after some extended use. To help with extending battery life, you can set the time it takes before the printer shuts down (three, five or ten mintues).

There’s no need for ink cartridges as the printer uses ZINK (zero ink) technology. The colors are actually right there on the paper itself, in the form of microscopic dye crystals. When heated to a very high temperature, the crystals will go from colorless to a specific color (cyan, yellow or magenta). And that’s how the colors in the photographs are produced with the special LG Pocket Photo papers. Note that the printer is smaller than your typical 4R prints, so the paper size used on this printer are also smaller than usual measuring 5.1 x 7.6cm (that is, 2 x 3-inch). Some might find it too small, while others might find it a very handy size for sharing as it can be easily stored in your wallet/purse.

The Pocket Photo works with both iOS and Android devices, and you can connect to the printer via USB, Bluetooth or NFC. Before you start printing though, you will need to download the free Pocket Photo app from either the Google Play store or the App Store. And while the phrase "you get what you pay for" is generally true, we were quite impressed with the app’s features and usability.

Surprisingly, the Pocket Photo app provided an impressive number of features and options. There’s the usual ability to adjust brightness, contrast and saturation levels, as well as the ability to apply various filters like making your picture look like a vintage photograph. Alternatively, you could always apply filters and effects with your favorite photo-editing app before using the Pocket Photo app to print out the finished product.

There’s also an interesting collage function which lets you put up to four photographs in a single photographic paper print, and the app even provides different layouts for your collage. In addition, there’s also the ability to add a photo card border to your picture. To top it all off, you can include a date stamp on your photo and interestingly enough, print a QR code on the photo too. The QR code allows you to embed information like your name, contact information and even links to videos on YouTube and other online follow-up actions.

Once you have paired the Pocket Photo to your phone, files are sent to the printer over Bluetooth. While the time taken to print your picture depends on the size of the file, most of our prints took between 30 and 40 seconds. While we had our hopes up after seeing how well the free Pocket Photo app performed, sadly the printer faltered when it came to print quality. Prints appeared washed out, and appeared to have a warmer cast when compared to the original. This was especially apparent on yellow objects, with the prints producing yellows that bordered on orange.

To illustrate, the below left image is a camera shot of the print out from the LG Pocket Photo printer. While an image capture of an photo isn't the most accurate method, this is to quickly give you an idea of the color accuracy discrepancy when compared to the original which is on the right.You will notice that the sunflower appears muted and borders to an orange tone in the printed photo, while the original on the right is a bright yellow. Likewise, there are other examples you can pick out from the photo comparisons below.

The LG PD233 Pocket Photo offers portability and convenience; it’s certainly rare to find a portable printer of this size. While the concept isn’t new (the Dell Wasabi hit the market about four years ago but was discontinued shortly after being introduced), the ability to print your photos on the go has gotten more affordable. The Dell Wasabi was going for S$319, while the current LG Pocket Photo printer’s selling price is just S$199.

Since the Pocket Photo does not use ink or toner, there’s no need to replace cartridges. Consumables are in the form of the special ZINK paper, which go for S$18 for a pack of 30 sheets (in retail, it's available for S$15). This works out to about $0.60 apiece (or less). The Pocket Photo gives you the chance to print photos from your smartphone quickly via Bluetooth and LG’s accompanying app is quite useful. However, the Pocket Photo printer falls short of being the best because of its color accuracy. Details in the printed image are notable for its small print out size, but with color accuracy swinging towards a dull warm cast and there being no way to correct this, this really hurts the overall performance of the LG Pocket Photo printer as we really enjoyed using the petite printer and its accompanying app.

If you still wish to print images from your smartphone while on the go or at a remote location, another option is the Canon Selphy CP900. The Canon Selphy CP900 also costs S$199, and while there's the additional cost of replacement ink cartridges and paper (both items are sold in a package), print quality is better and you're not limited to a single photo size even though it's not as compact and portable as the LG Pocket Photo printer. However if portability and convenience strongly outweighs all factors (especially print quality), then the LG PD233 Pocket Photo printer should be high on your list of gadgets to get. 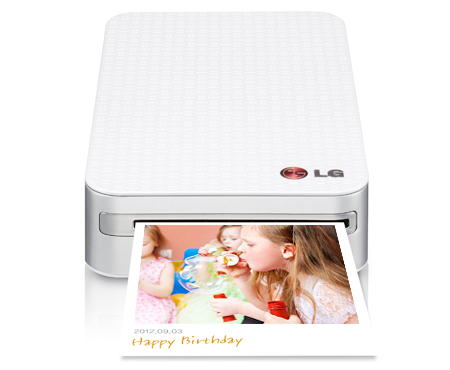