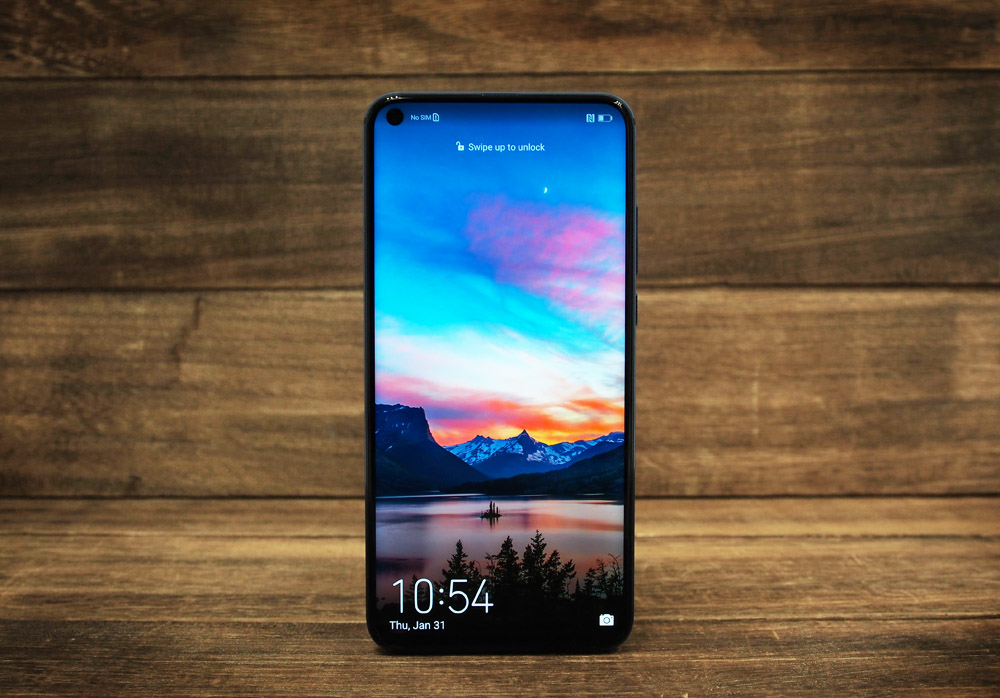 The Honor View 20 is one of the first flagships of the year, and also one of the first phones you can buy with a hole punch display, which is looking like it will be the hottest trend of 2019. If you don't know what a hole punch display is, it's a small circular cutout in the display's top left corner for the selfie camera (which looks as if a paper hole puncher was applied on that corner screen, thus the name). The upcoming Samsung Galaxy S10, as well as numerous other phones likely to be announced at MWC next month, will most likely feature this type of display.

As a sub-brand of Huawei, Honor's phones tend to focus on good value over outrageous features, and their new View 20 does just that. It has a 6.4-inch Full HD IPS LCD display, a Kirin 980 AI processor (the same processor inside Huawei's flagship Mate 20 Pro), a 48-megapixel rear camera, and a 25-megapixel front camera, all for just S$699 for the 6GB RAM/128GB version or S$829 for the 8GB RAM/256GB version.

Both phones are available at Honor's online official stores on Qoo10, Lazada, and Shopee, at selected Gain City outlets as well as at various authorized retail partners’ stores across Singapore. 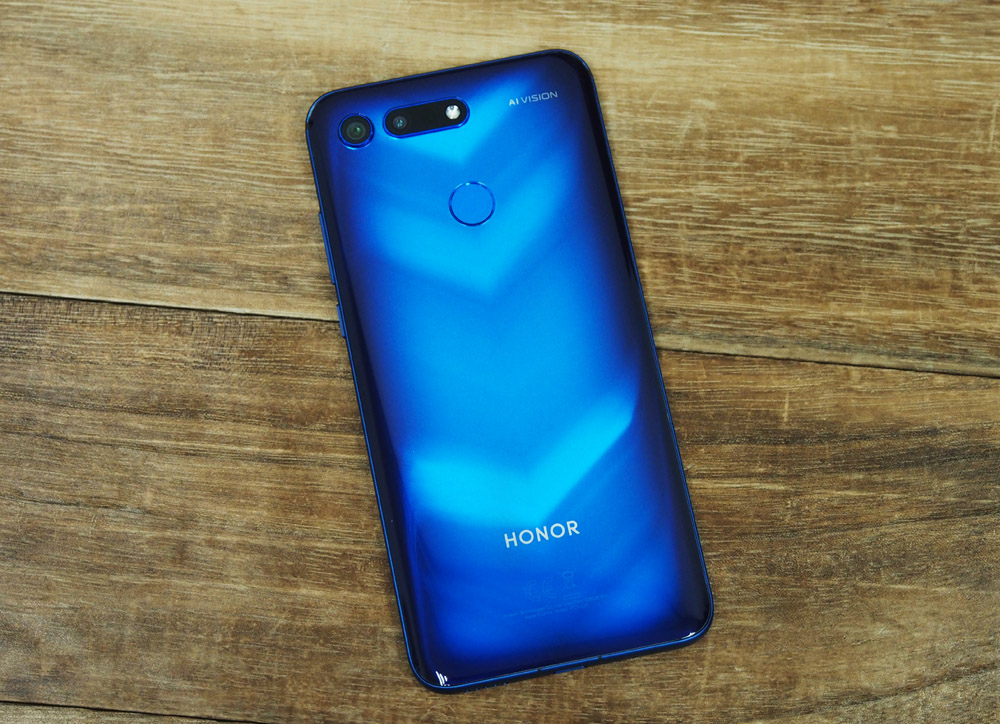 Almost every phone today has a glass back, but none of them look quite like the View 20. The 8GB/256GB version we're reviewing is available in either Phantom Blue or Phantom Red, and they both have an ultra-reflective rear with an underlying chevron pattern (or maybe it's a 'V' for View?). There's a sunburst effect too, with the colors around the edge darker than they are in the middle. Honor calls this design "Aurora Nanotexture" and it's definitely a head-turner, although it might be a little too bold and flashy for some.

If you opt for the 6GB/128GB version, which is also available in red or blue, you'll still get the chevron pattern, but you won't get the sunburst effect, which is exclusive to the 8GB/256GB versions as part of Honor's collaboration with Italian fashion house Moschino.

There's actually a more subdued black version too, but it's not currently available in Singapore. On all of the phones, the glass back is a major fingerprint magnet, so expect to wipe it down frequently. 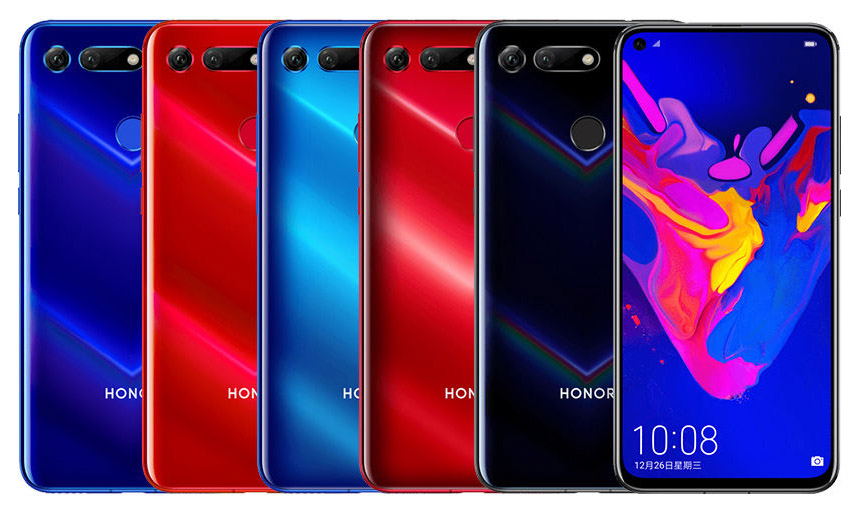 Like most glass-backed phones, the edges on the View 20 are curved for comfort, which also helps to provide a more secure grip. Despite last year's Honor 10 having an in-display fingerprint scanner, the View 20 instead has a regular fingerprint scanner, which is positioned three-quarters of the way up the middle of the rear. While that's a bit of a disappointment, for a phone in this price range, it's not too surprising. The phone also has a Face Unlock option, but as it doesn't have a 3D front camera, it's more for convenience than security.

In the top left corner, you'll find a somewhat unusual looking camera setup, with the primary 48-megapixel f/1.8 Sony IMX586 lens isolated in its own camera module, and the ToF (Time of Flight) 3D stereo camera lens sitting in an elongated module next to it, which also includes the LED flash. 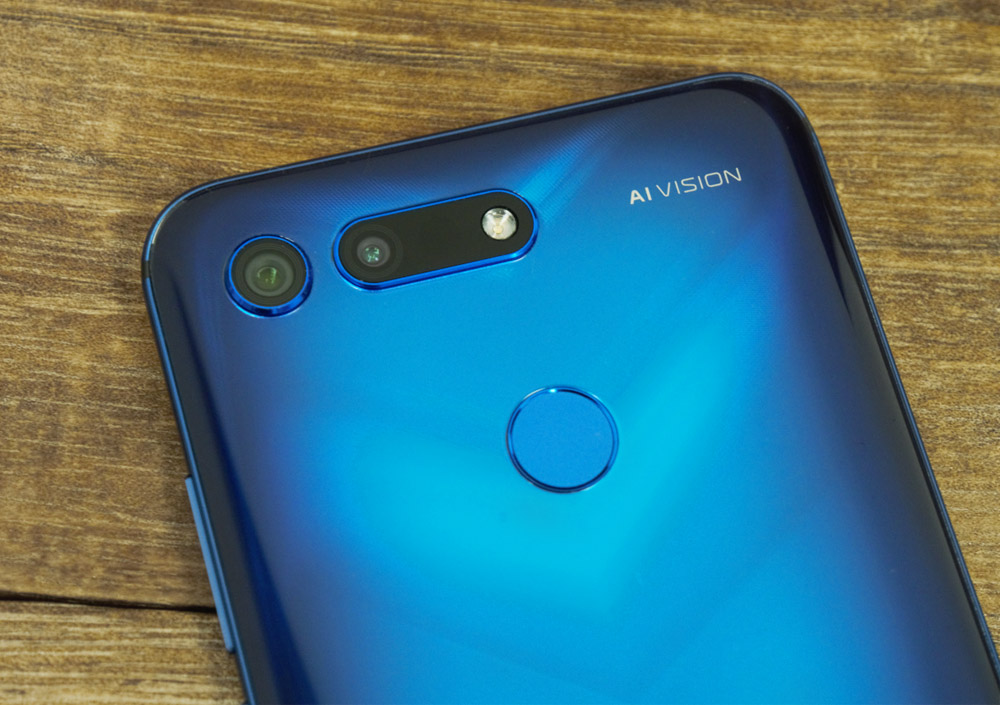 At the bottom of the rear, the View 20 has a big, bold 'HONOR' wordmark in all caps, replacing the old lowercase 'honor' branding we saw on the Honor Play. I prefer the more understated appearance of the old branding, but the new all caps lettering does fit better with the View 20's loud and colorful aesthetic.

Onto the front, you'll see that the View 20 is one of the very first smartphones available with the front-facing camera directly behind the display, leaving a small "hole punch" cutout in the top left corner. According to Honor, the cutout is just 4.5mm in diameter, making it much smaller than the 6mm cutout used by most of its competitors. Honor still managed to fit the earpiece, proximity and ambient light sensors into the tiny bezel above the display too - all very impressive. Thanks to the much smaller cutout, the View 20 boasts a 91.8 percent screen-to-body ratio! It doesn't exceed the ratio achieved by the Xiaomi Mi Mix 3, but it's still commendable. 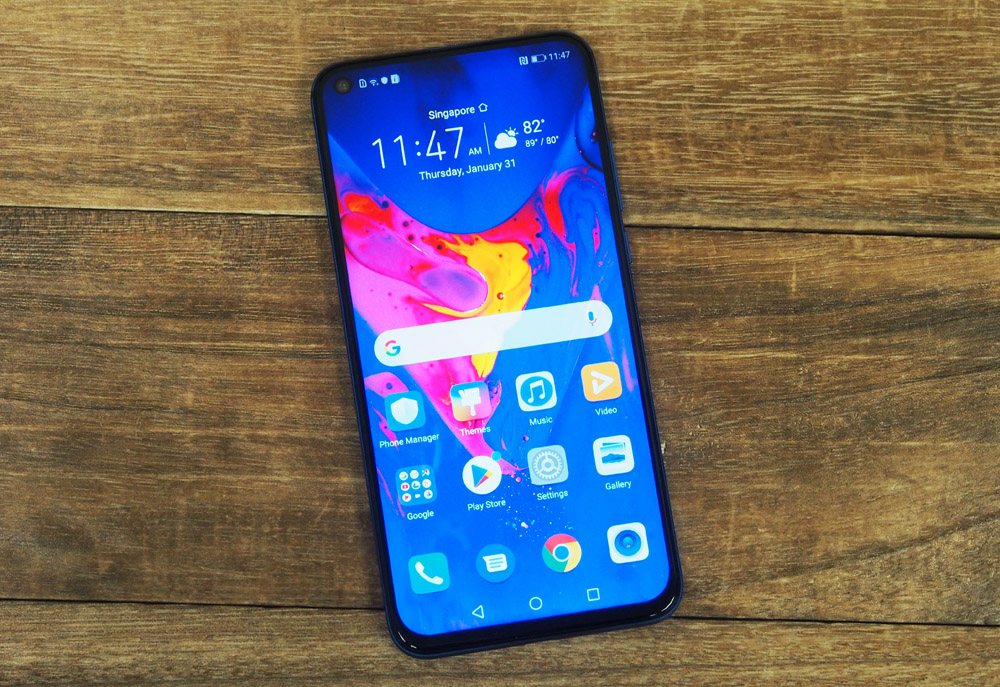 I've heard some people refer to the hole punch cutout as a "huge dead pixel" but after a few days with the View 20 I find it much less obtrusive than a notch. I think even the most hardcore of notch-haters will find it a good compromise between a notch and having huge unsightly bezels above the display.

On the left side of the phone, there's a dual nano SIM tray. Unfortunately, the View 20 does not have a microSD card slot, and it doesn't support the new Nano Memory format that Huawei introduced with the Mate 20 Pro either. 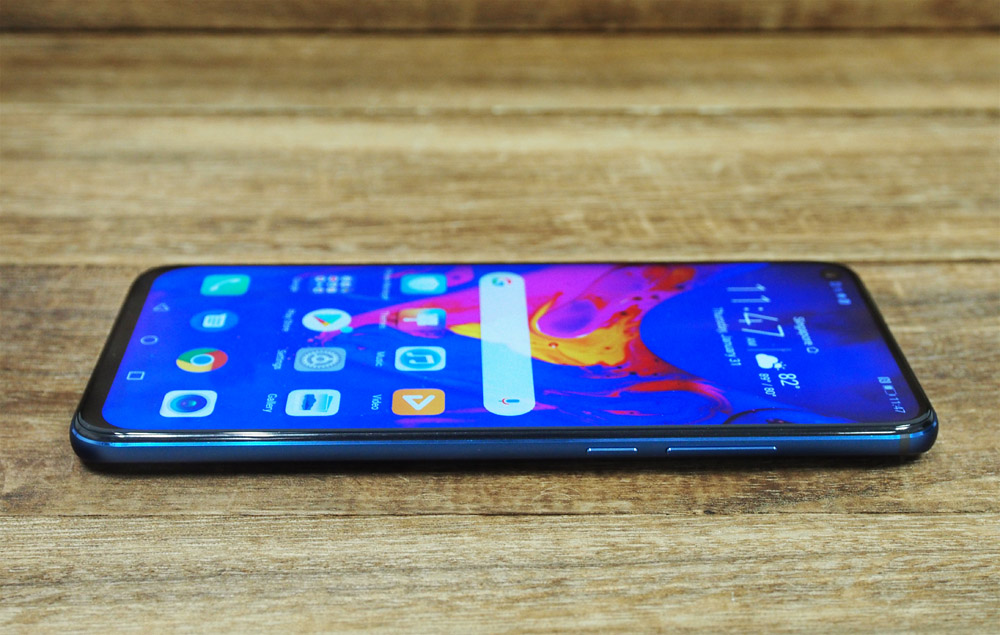 At the top of the phone are a 3.5mm headphone jack, an IR blaster, and a noise-canceling microphone. The bottom has a USB-C port, downward-firing loudspeaker, and another microphone. 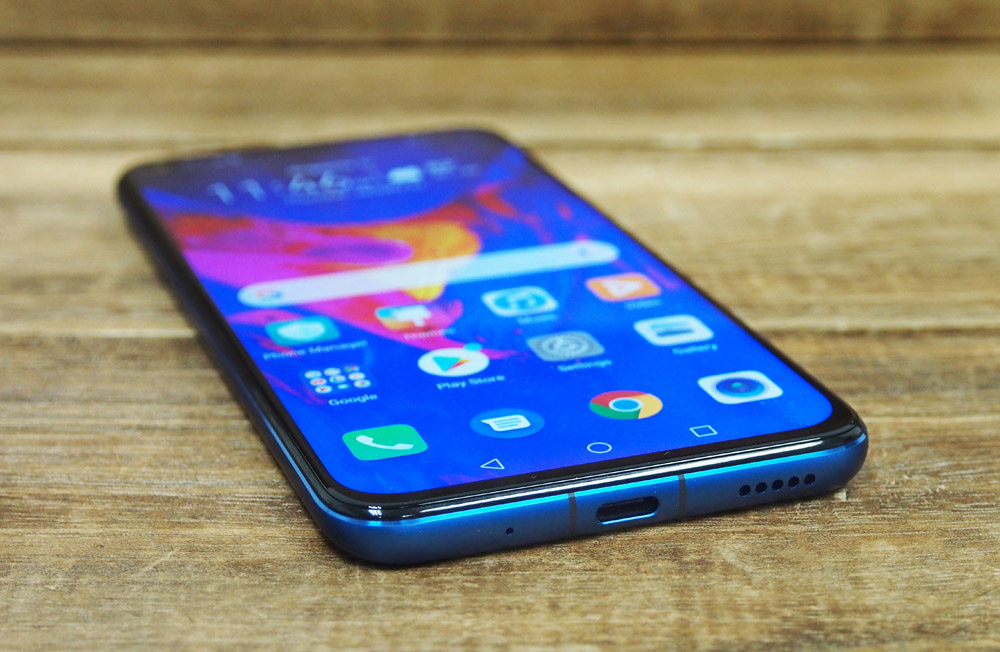 Finally, it's worth noting that the View 20 doesn't have an IP rating, so you should probably keep it away from dust and water.

The View 20 has a 6.4-inch IPS LCD display with a 2,310 x 1,080 pixels resolution. The screen isn't as nice as the higher resolution OLED displays you'll find on more expensive phones, but at this price, it doesn't really matter. The screen is sharp enough, with good brightness and decent viewing angles.

Contrast could be a little better, but it's acceptable, and you won't really think much of it unless you're comparing it directly with an OLED panel. The default 'Vivid' color profile is a little too oversaturated for my liking, but if you go to the settings menu and switch to the 'Normal' color profile, it looks much better. 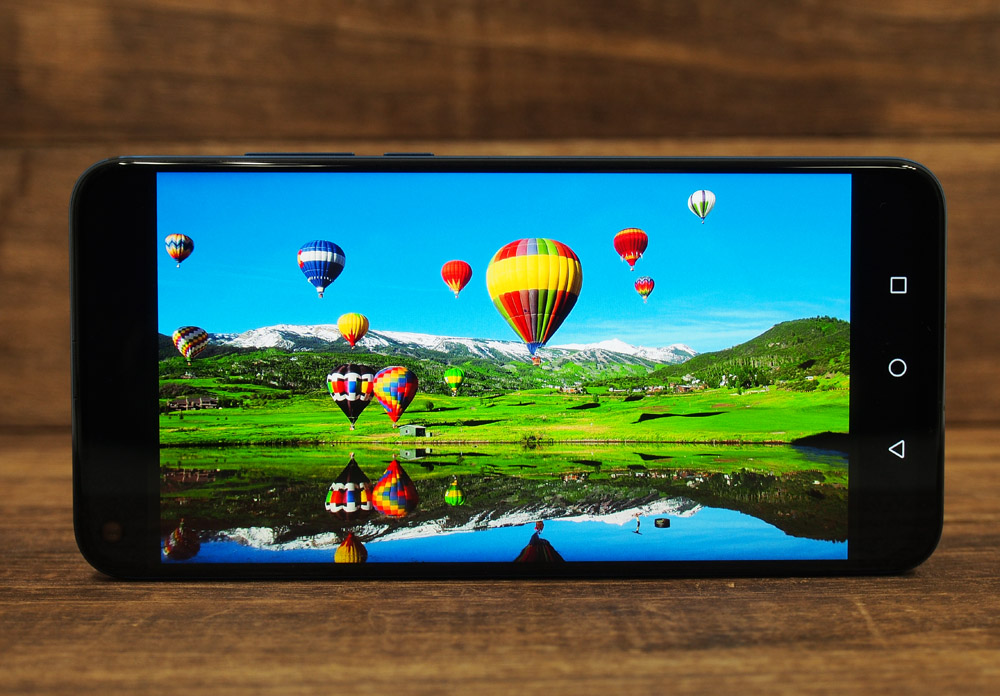 If you look closely, there's actually some slight discoloration on the display right around the camera hole. Apparently, this is completely normal and is a side effect of a special technique Honor uses to prevent any light from leaking into the selfie camera.

Unlike a notch, the hole punch cutout seems to mostly disappear in use, and it generally doesn't block any important info. If you really can't stand it, there's an option to hide it, which adds a black bar to the top of the display (similar to how you would hide a notch). In the settings menu, it's still referred to as a 'notch' even though it's clearly not.

Audio on the View 20 comes from a single downward firing speaker. It doesn't have much bass, but it is really loud, and it doesn't suffer from the distortion you normally get when cranking up the volume.

The View 20 runs on Android 9.0 Pie out of the box with Honor's new Magic UI 2.0 on top of it. Magic UI seems to be Honor's version of Huawei's EMUI but for all intents and purposes, it's essentially the same OS we saw on the Mate 20 Pro. It's not the most lightweight experience, but it's fairly clean and simple to use. The UI has some redesigned menus and icons, a new color scheme, and as usual, some pre-installed apps offering varying levels of extra functionality.

As with almost all Chinese phones, the home screen removes the traditional app drawer, and instead puts all of your apps on the home screen, similar to iOS. Fortunately, there's an option in the Settings menu to restore the app drawer if you prefer.

If you really want to take advantage of the bezel-less display, Magic UI also includes an iOS-style gesture-based navigation that lets you get rid of the navigation bar completely. Swipe up from the middle for Home, Swipe up and hold for Recent apps, Swipe up from either lower corner to summon Google Assistant, and swipe inward from the left or right edge to go Back.

The phone includes quite a lot of pre-installed apps and utilities, including Huawei Health, which lets you track your activity, Huawei Share (accessed through the pull-down notifications panel), which lets you wirelessly share or print files with a PC or printer on the same wireless network, something called "Party Mode" which seems to let you sync audio between several Honor devices on the same wirelessly network (unfortunately I wasn't able to test this), a Password Vault to store your passwords, and a Smart Remote app that uses the IR blaster. Unlike a lot of phones, you can easily uninstall any app you don't want.