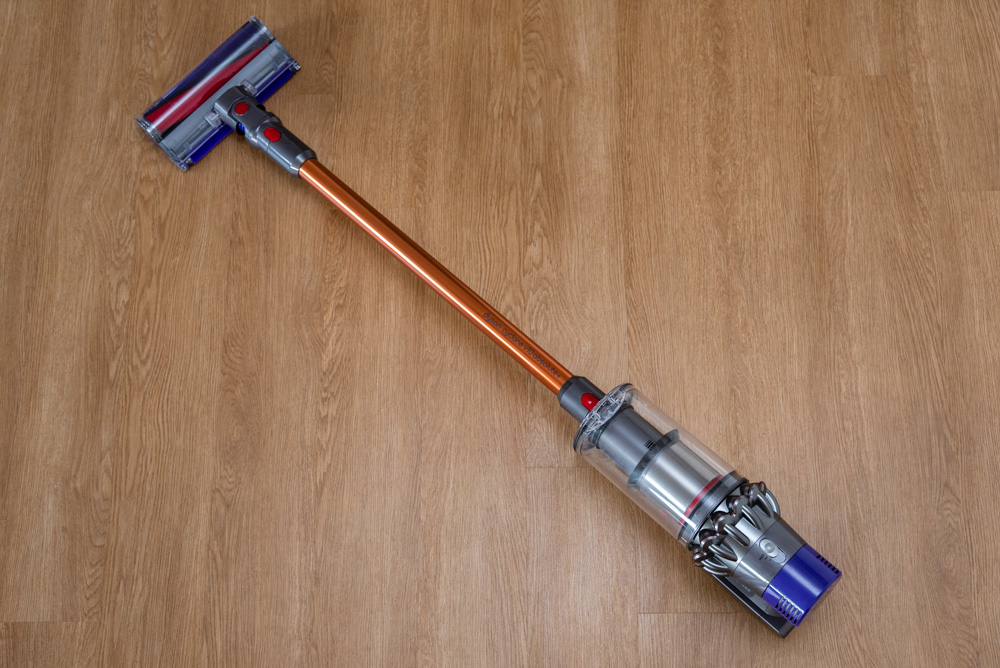 Everything you need to know about the Dyson Cyclone V10 cordless vacuum is in its price. If you can fathom paying nearly a thousand dollars for a vacuum cleaner, then it’s likely you’ll have no regrets doing so. The V10 is a meticulously designed performance machine, built to vacuum, dust, and even filter. It performs like a champ, and I can’t find anything crummy to say about it.

The V10 succeeds the V8 cordless vacuum and is a different machine, both inside and outside. The V10 has a new V10 digital motor that is smaller but more powerful. It has a longer battery life, and different acoustics. The V10 also has a fresh design, which aligns the motor, bin, and cyclone in a straight line. This apparently creates 20% more suction power than the V8 and also makes it look like a ray gun. 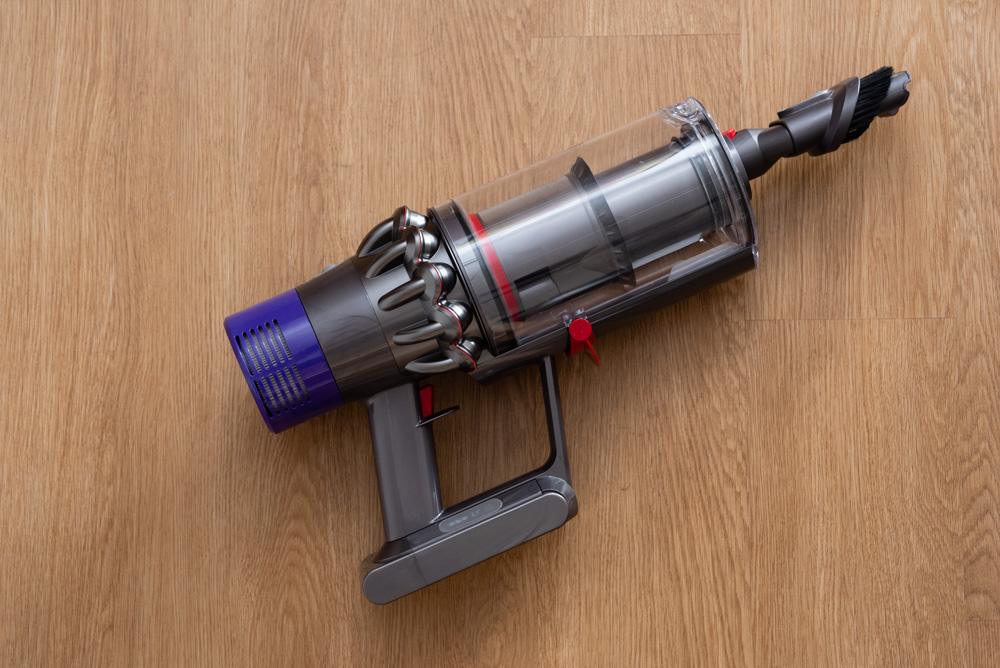 One of the best things about the new chassis is that it’s now easier — and more hygienic — to empty the bin. On previous designs, you had to pull a release handle upwards to eject the bin. It got fiddly; my one-year-old V8 now insists on opening only if you pull up at angles it likes. On the V10, you point it downwards and push the ejection lever to release the bin. There aren’t any angles to fidget with, and you’re less likely to get caught in the dust bloom from the discharge. You can briefly see how it works at the 0:46 mark in this video:

Likely the most fun you’ll have vacuuming 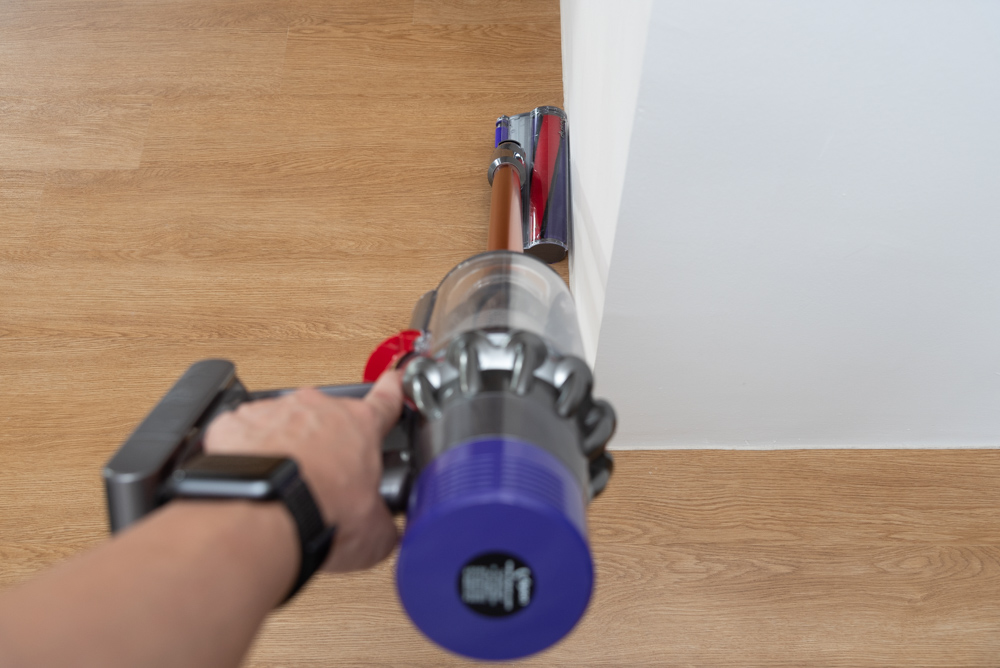 Before you empty the bin, you have to use the V10, and it’s a pleasure to do so. The soft roller cleaner head glides and rotates smoothly. The accessories attach easily and give you a variety of cleaning options. The new digital motor V10 spins up to 125,000 revolutions per minute (RPM); faster than the digital V8 motor that spun at 110,000 RPM. I can’t tell you how much of a difference 15,000 RPM makes. But I can tell you that at its maximum setting, I can’t use the V10 to vacuum my carpets — because it literally sucks the carpets off the floor. My V8 doesn’t do that.

The V10 has three power modes, compared to the V8. I’ve used the middle setting for around 20 minutes and still had two bars of battery life left (the V10 comes with a new battery indicator). I’ve also used the V10 at maximum and squeezed around 20 minutes out of it. For comparison’s sake, my V8 gets around seven minutes of use at maximum power. 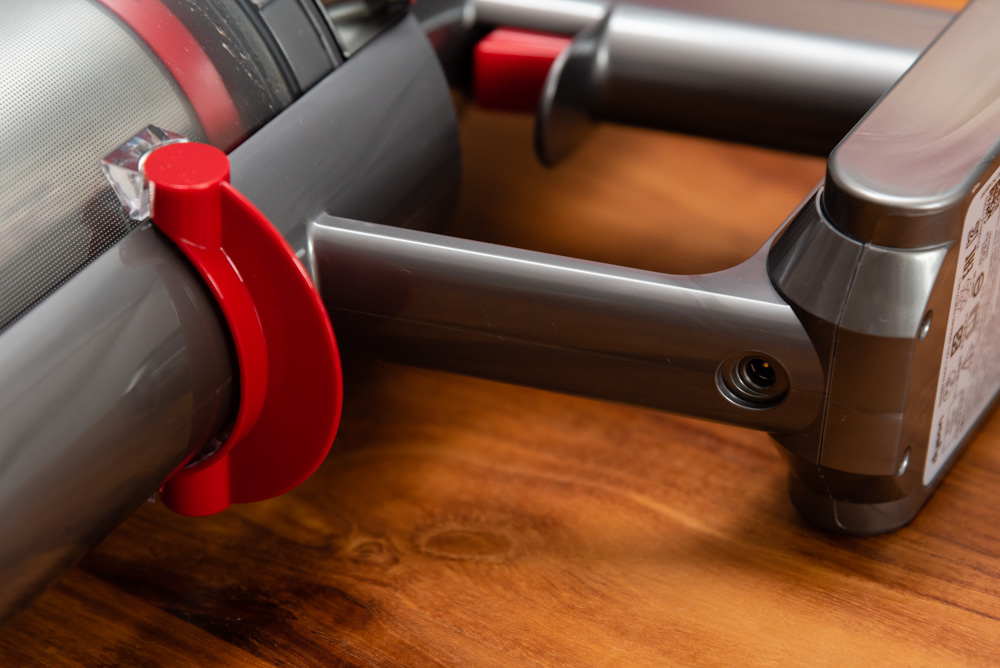 The V10 has a longer battery life of up to 60 minutes, while the V8 could run up to 40 minutes. How long you’ll actually get, however, depends on which attachment you use, the power mode you use, and how trigger happy you are. The mini motorized tool, for example, uses the battery, while the combination tool doesn’t. And because you hold the trigger to vacuum, you might get ‘more’ cleaning time than someone else, because you pressed less. It takes 3.5 hours to fully recharge the V10. 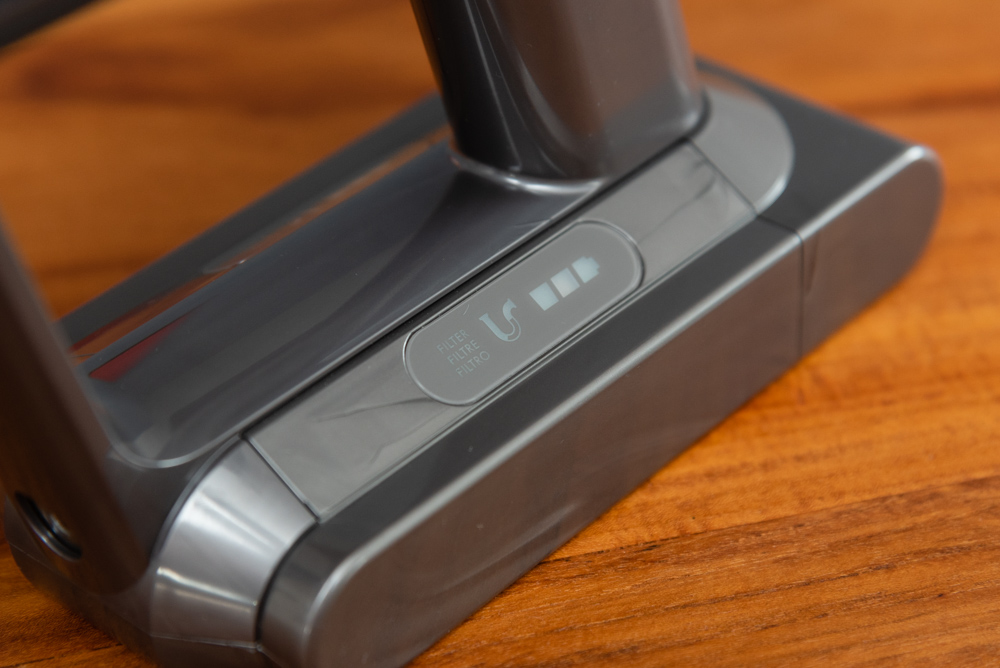 I try not to go maximum power except for short bursts. Ask the V10 to give maximum effort for too long and it gets toasty. The maximum power mode is also the loudest. The V10 is as quiet as a vacuum cleaner can get, but it seems the V10 pushes its sounds into higher frequencies. I don’t notice this, but my wife has hearing as sharp as a dog’s, and the V10’s whine annoys her. You might want to audition this for yourself if you, too, hear like a German Shepard.

Read 7 User Reviews
★ ★ ★ ★ ★
Write a Review
Compare This | Specifications
Longer battery life of up to 60 mins
It handles smoothly
It has powerful suction
The bin is easier to empty
It’s easier to clean
Expensive!
Our articles may contain affiliate links. If you buy through these links, we may earn a small commission.
Sponsored Links